Turin's Cat Café - please come back when you'll be ready...

It's been since a few months that I was reading on Facebook the piece of news concerning the opening of a Cat Café in Turin, and this had made me grow lots of expectations.
For those who don't know it yet, a cat café is, like the word itself may suggest, a café where there are cats as well, who offer their pleasant company while you are having something there (or better... maybe having something there becomes a sort of excuse for enjoying the cats' company) and who can also be caressed and cuddled - just if they want, of course.
It's a kind of format born in the Far East (Japan and Korea) and that, little by little, has started diffusing in Europe as well, and now also in the US.
I was a bit skeptical about the fact that it could arrive in Italy too, if nothing for the fact that here public exercises must undergo through very anal hygiene rules; but, actually, if there could be a city that could have worked as a candidate for starting this kind of business on Italian territory - no one could have been better than Turin, with its Middle European appeal and its tendency of becoming a cradle for new things.
I've got to know that the first Turin's cat café opened while I was in Paris - experimenting something similar for the first time, by the way.

So, as soon as I've come back from my trip, I've immediately run there to try the new café.
The place is called MiaGola, that is a sort of funny word game (in Italian "Miagola" means "meows", but it's also composed from the words "Mia" and "Gola", "My Gluttony"), and it's very close to the Porta Nuova railway station, in the elegant pedestrian area of via Amendola. 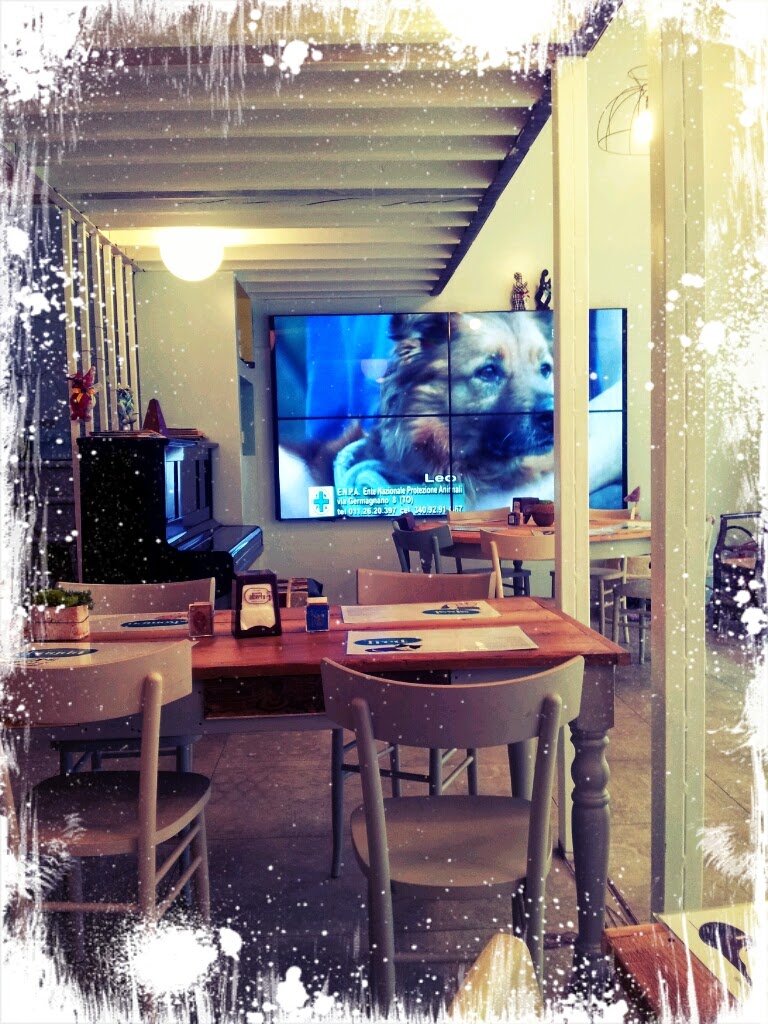 The day of my experiment was a Friday morning, the place had just opened and there was only me, John Elkann's wife and the cats. 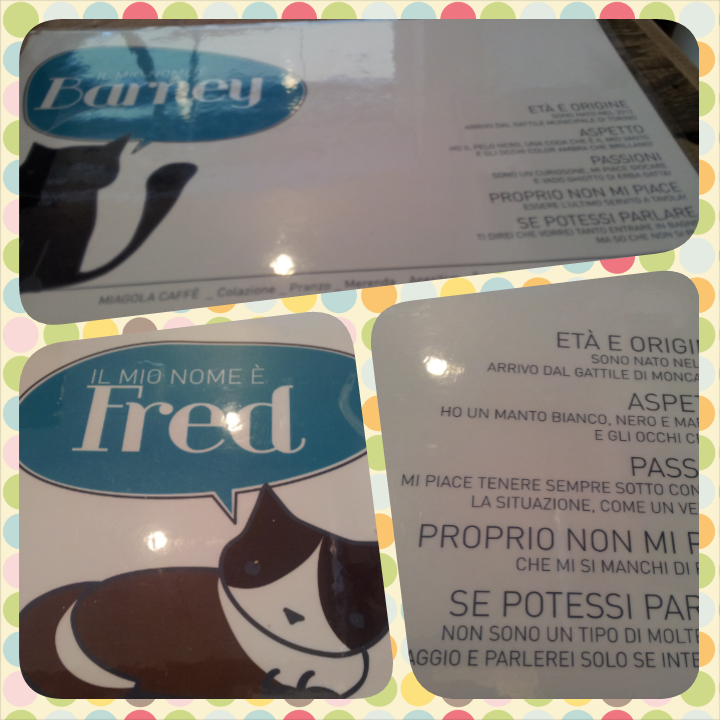 First impression has been positive - I've liked this big and bright room, with shabby chic furniture, scratchers and some other feline pastime here and there.
On the white wooden tables there were some placemats with one of the café's cats drawn on and its identikit, which describes its story and its charachter with a few sentences. 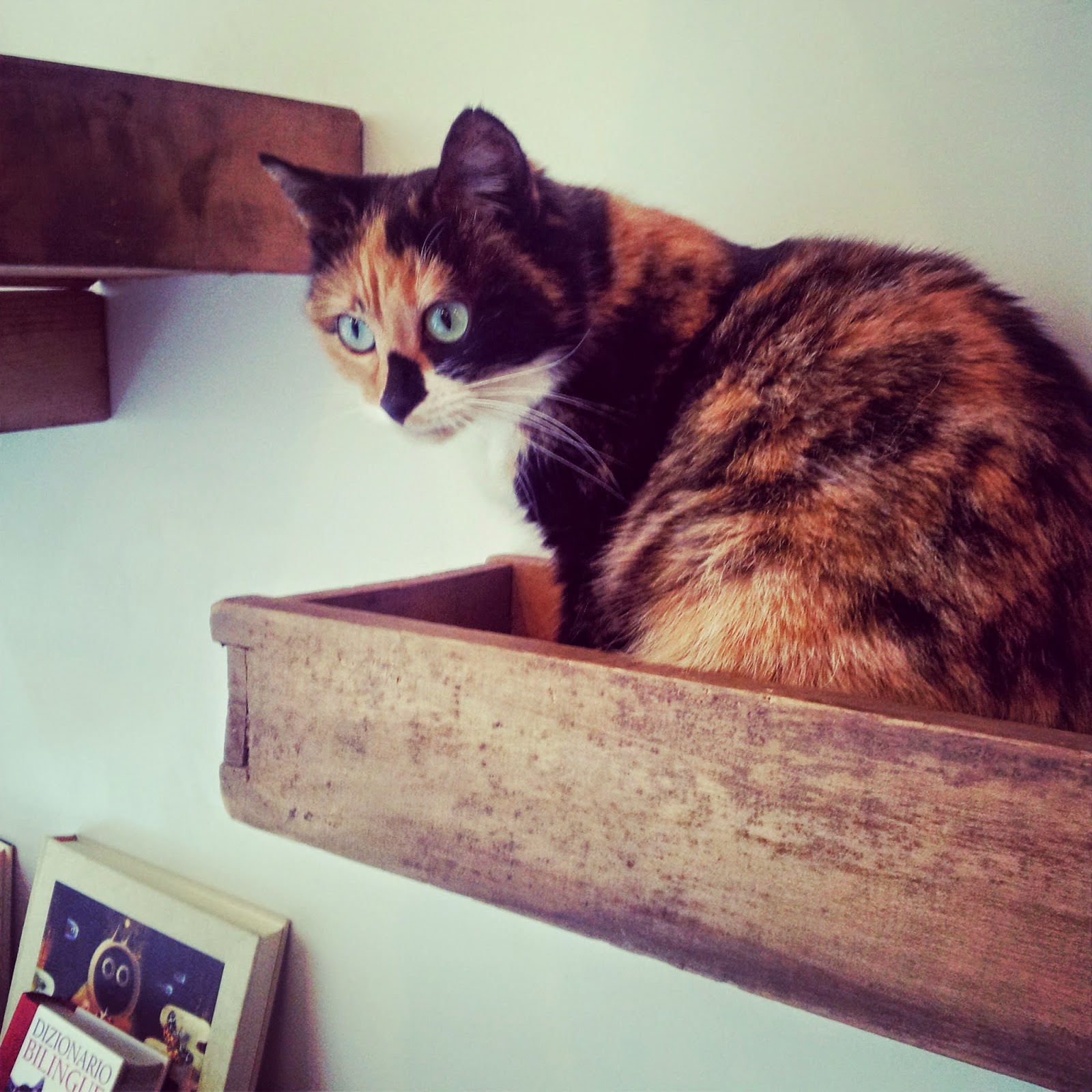 On the wall in the entrance there are many drawers, hanged as if they were shelves, and in one of these there was Mia napping, a petite tortoise with incredible green eyes, that at first was coily shrinking back, but who then, after a second trial of approach, has happily allowed me to stroke her. 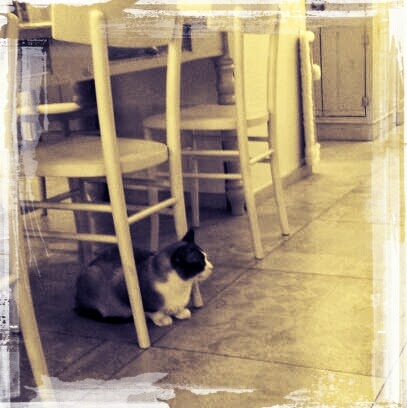 Underneath a table there was Fred, a big siamese with a seraphic attitude, who didn't shrink away at my caresses, but who stayed very serious and composed. 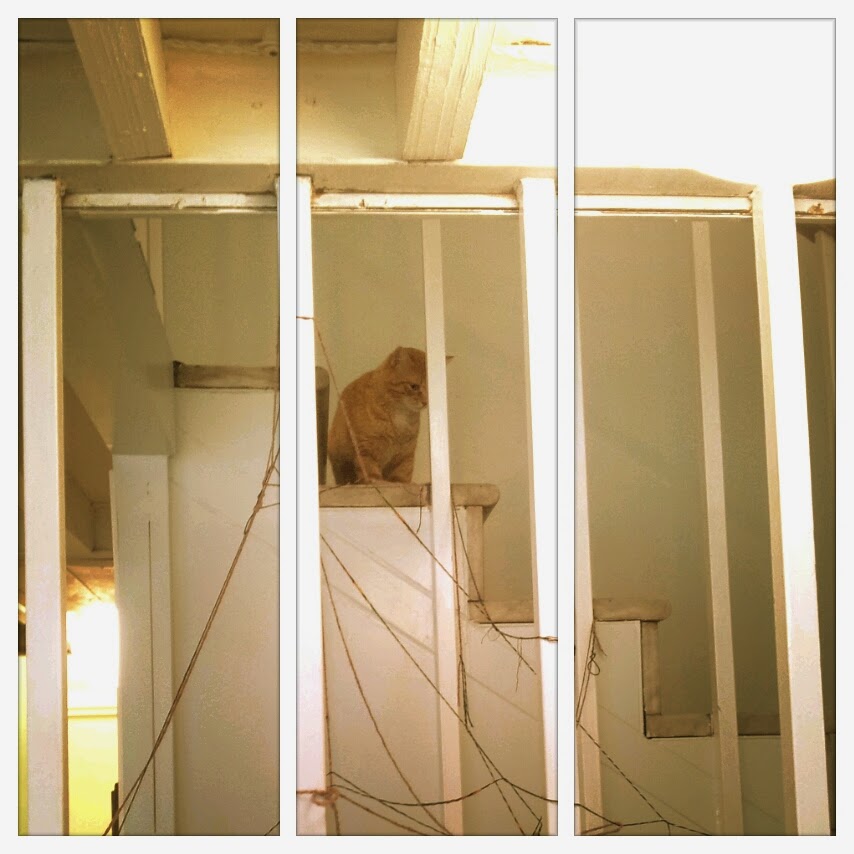 Finally, on the stair that goes upstairs, where there are some of the cats' beds and some yarns which I supposed are mostly meant for decoration than for feline entarteinment, there was Romeo, a big and pretty ginger, who was controlling, half-hidden, how things were going on downstairs. 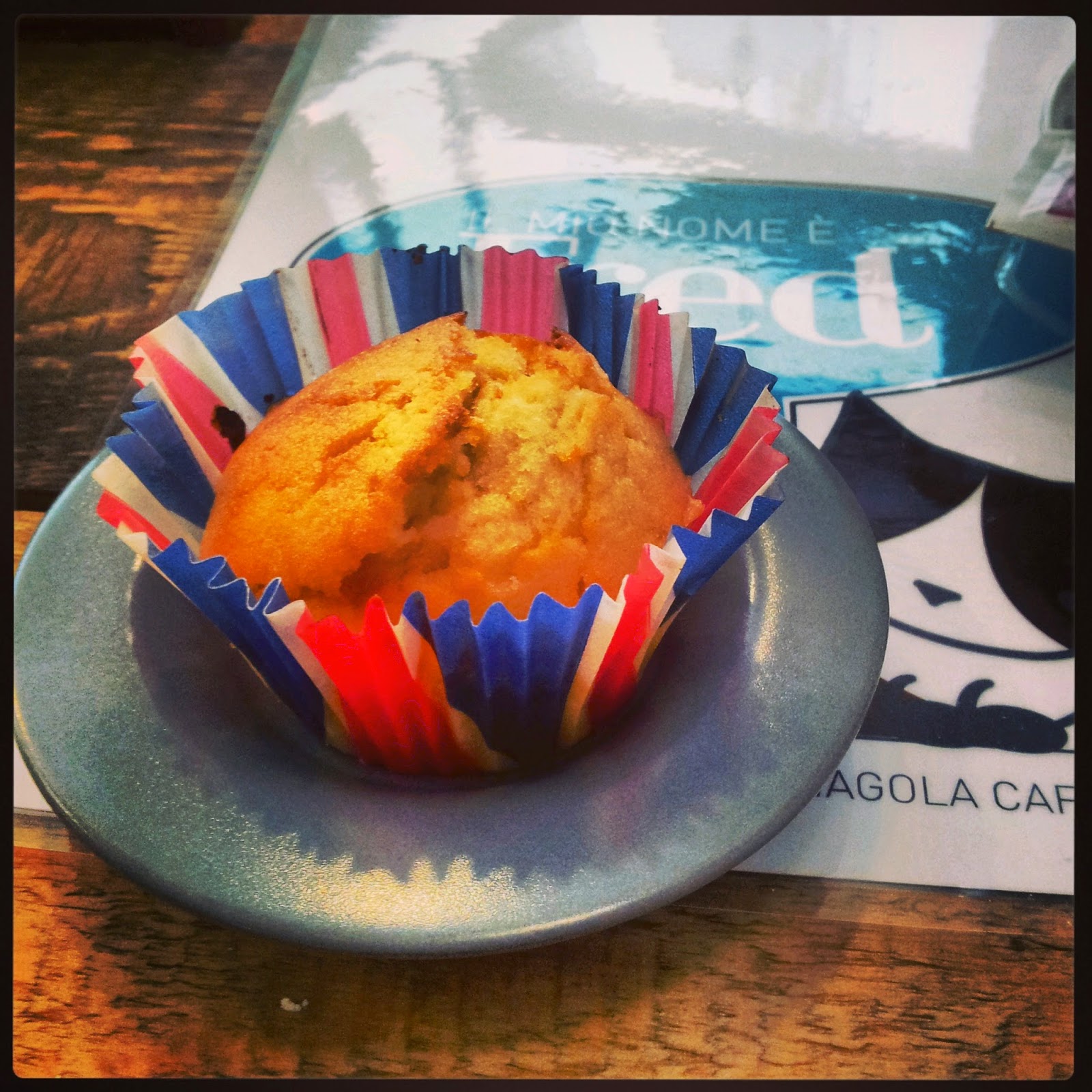 To be honest breakfast didn't make me too enthusiast: the yogurt muffin I've had was a bit too small and gummy for the 2.80 € it costed, but I forgave it for the fact it had a Union Jack wrapping - and, moreover, I had basically come for the cats, not for my gluttony. 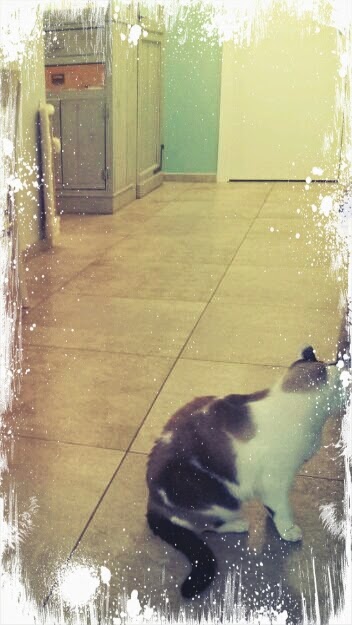 Actually I've been left a bit puzzled from the fact that the cashier was inside the kitchen, from the quite harsh comment of the waitress towards an old man who, after having realized they were serving no croissant, had decided to go away, and moreover from the fact that the café had no foyer (like for example the Parisian cat café had): its door is directly on the outside, and, since when it gets opened it doesn't close automatically, knowing the impulsive feline nature, I thought that the risk of a cat sneaking out and running away was a bit too high.
But on the moment I was so much on a seventh heaven for the feline interactions just had that I didn't pay too much attention about these aspects.

But they got way more relevance during my second visit, also because also some other negative factors have been summed to these ones...
Ginger Cat came to visit me last Saturday, and obviously she was eager too to try the new place - also because my first review had been positive. 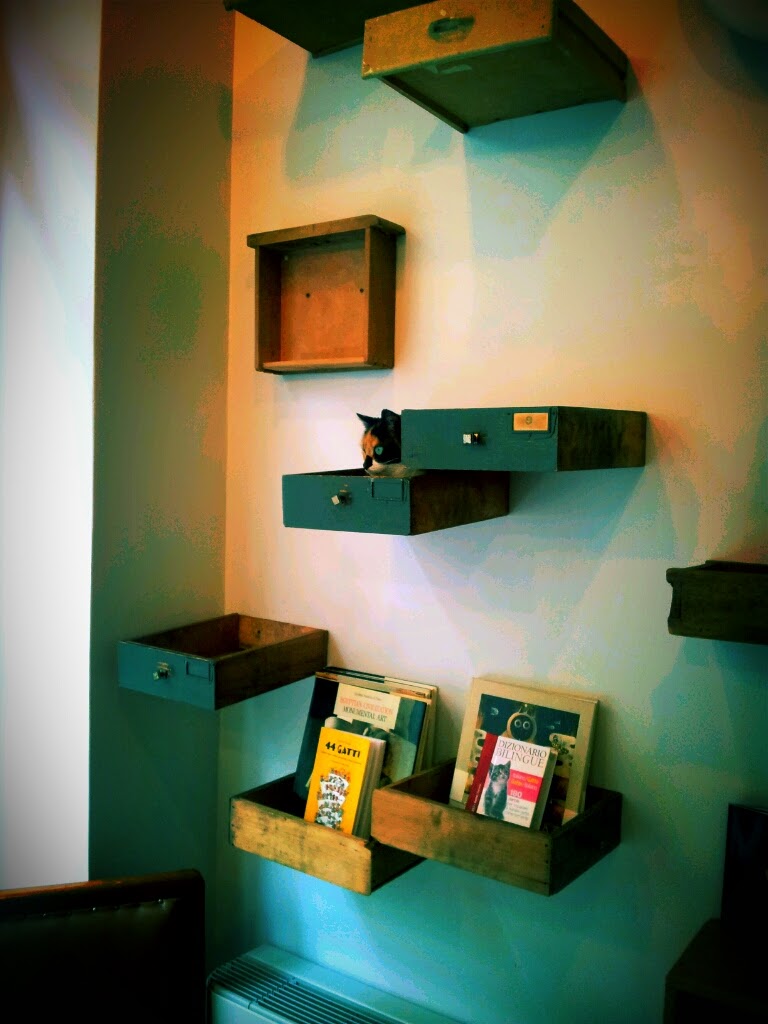 We had booked a table for 12, making it clear that we wanted to lunch.
Pity that, once we arrived, we are told that kitchen wouldn't have opened until 12.30.
So we have a warm drink to make time pass and, once that the hour has come, we have to beg for the waitress attention a couple of times before actually being able to proceed with the order.
It gets even more difficult to do it for the fact that they have no printed menu, but just a small chalkboard that they make pass from table to table.
So I begin growing the doubt that the people who run this place must be at their very first experience...
Orders are taken and delivered in a totally random way; but the main problem is another one.
Being it a cat café, there are simply no cats around.
And this is because the place is as crowded and noisy as the most popular pizzeria, with loud music (even if instrumental) and children running and screaming all over.
Cats do love peace and silence, and in fact they are simply not showing up, staying completely hidden in their own personal pied-à-terre downstairs - where anyway I figure them having a grumpy stare and bended ears, being pissed from all the chaos coming from upstairs. 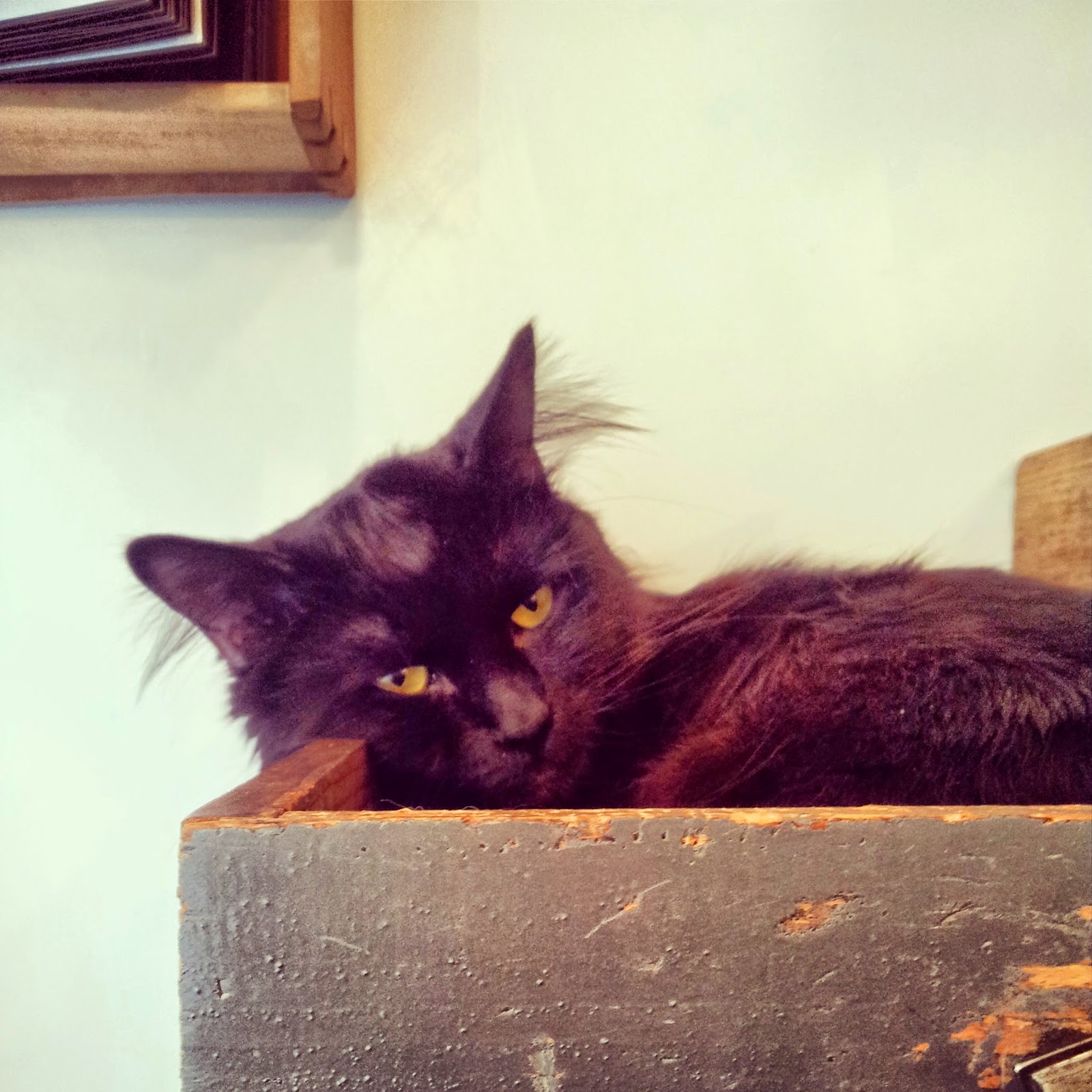 Apart from the two of us, the only other feline being there is poor Barney, a wonderful long haired black cat, whom I really wanted to know and who was totally concentrated at doing some authogen training inside one of the drawers on the wall, disperately trying to sleep and/or ignoring the hell around him. 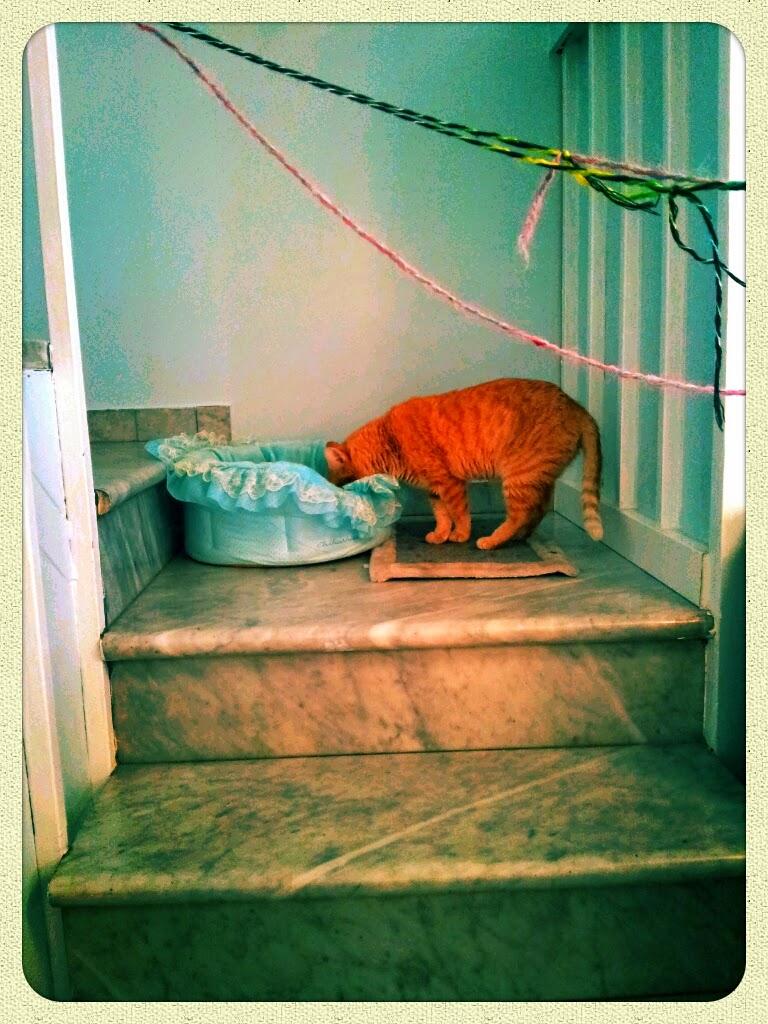 At one point, along the stairs, also Romeo found the courage to show up, but I fear he must have immediately regretted it, because, as soon as he appeared, adults & kids have started queuing to see and photograph him, as if he was a living attraction in a museum.
And the door was keeping on opening and not getting closed...
Which, besides making the cold coming in, was also keeping on making me get paranoid for the fear that cats, getting exasperated from the noise, could have thought about running away.
But luckily in that moment, the only cats who decided to run away have been Ginger & me, leaving halfway our risotto made with oily mushrooms and the cold potatoes.

Shall we give it another chance?
Maybe; although, even if we could make the effort to forgive the service's inefficiency and the food's low quality, what is more worrying is the cats' well-being.
And, in the meantime, I've also got the news that in Turin a second cat café has been opened.
While waiting to try this one as well, who knows if a bit of competition (or least of comparison terms) might be useful for the MiaGola owners...
Pubblicato da Serena Chiarle a 15:06