The Cat Band in Genoa

"Lucky you are, you are always on the road!" - has been the comment of some colleagues when I told them that on Saturday I would have gone to Genoa.
I smiled, and I thought that, actually, I go to Genoa so aften that I almost don't even consider it a real "travel" when I go there.
My friendship with Ginger Cat has been lasting, with solidity and importance, for 6 years, and we always try to meet at least once a month, alternating with some reciprocal visits.
I know the route of the railway line through Asti and Alessandria and then crosses the Alpes-Maritimes very well; as well as some corners, some libraries and some restaurants in the ducal city.
But the fact that I do not consider it a "real" trip does not mean that I do not consider Genoa as a worthy destination.
Indeed, it has been so long since I have been considering writing a post on the subject ; and I decided to draw inspiration from the trip of last Saturday when this time my visit there has been joined by Tabby Cat, Siamese Cat and Cat Gothic, bringing the feline company (almost) in full force.

I love Genoa because it is another one of those cities that are not only beautiful, but that also have a strong personality. 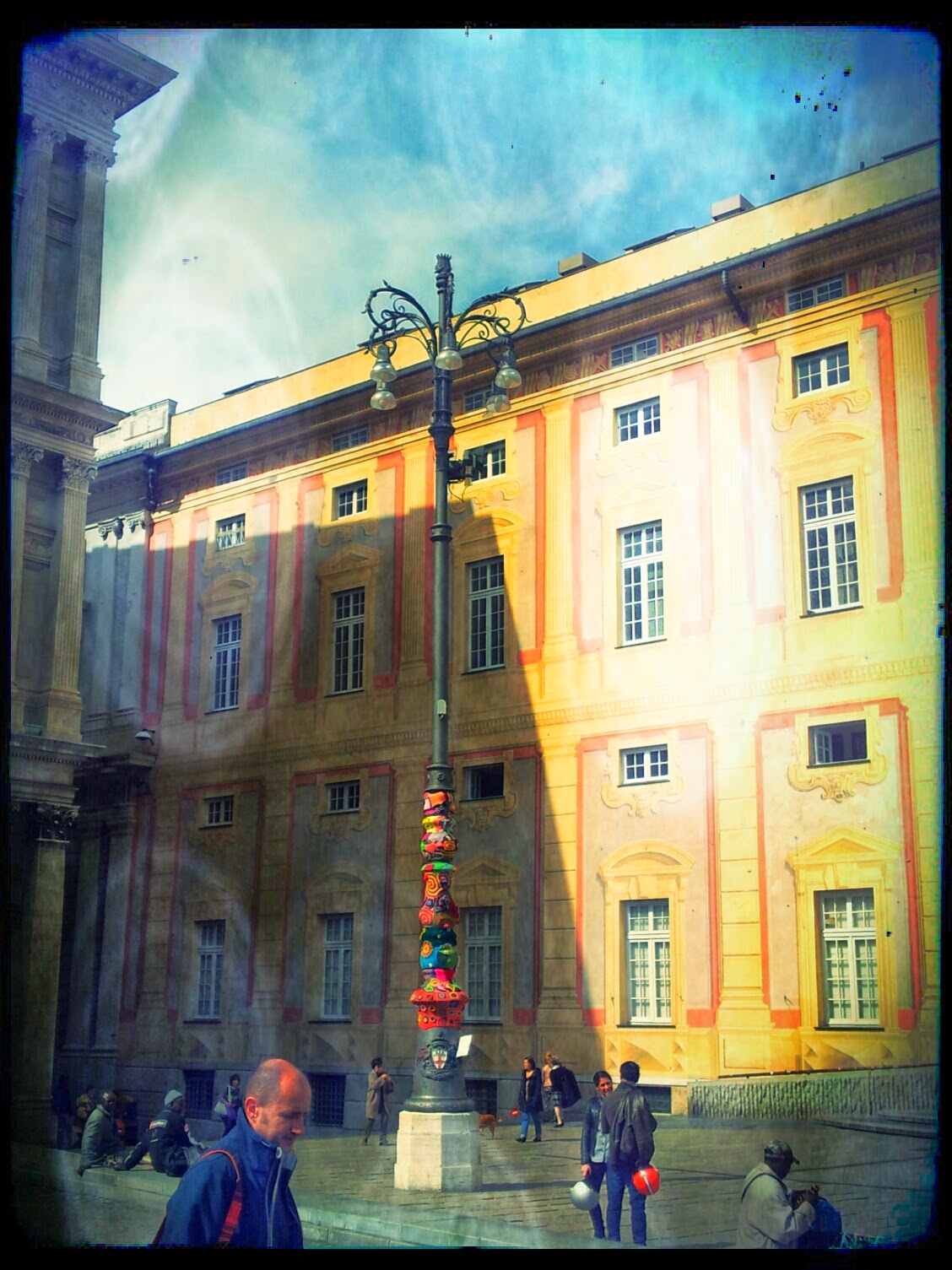 In this they resemble each other a little bit, her and Turin: they consider their noble remains as a matter of fact, which do not prevent them to roll up their sleeves and get their hands dirty; actually, it is precisely their spirits of workers (or sailors) that give them their strength of character, their stubborn humility.
They don't like to flaunt, they don't speak much, and by nature prefer to show things with facts rather than with slogans. They have hidden treasures you have to know how to look for, not being afraid to get to rummage: in Turin in the courtyards of palaces, in Genoa in the caruggi alleyways. 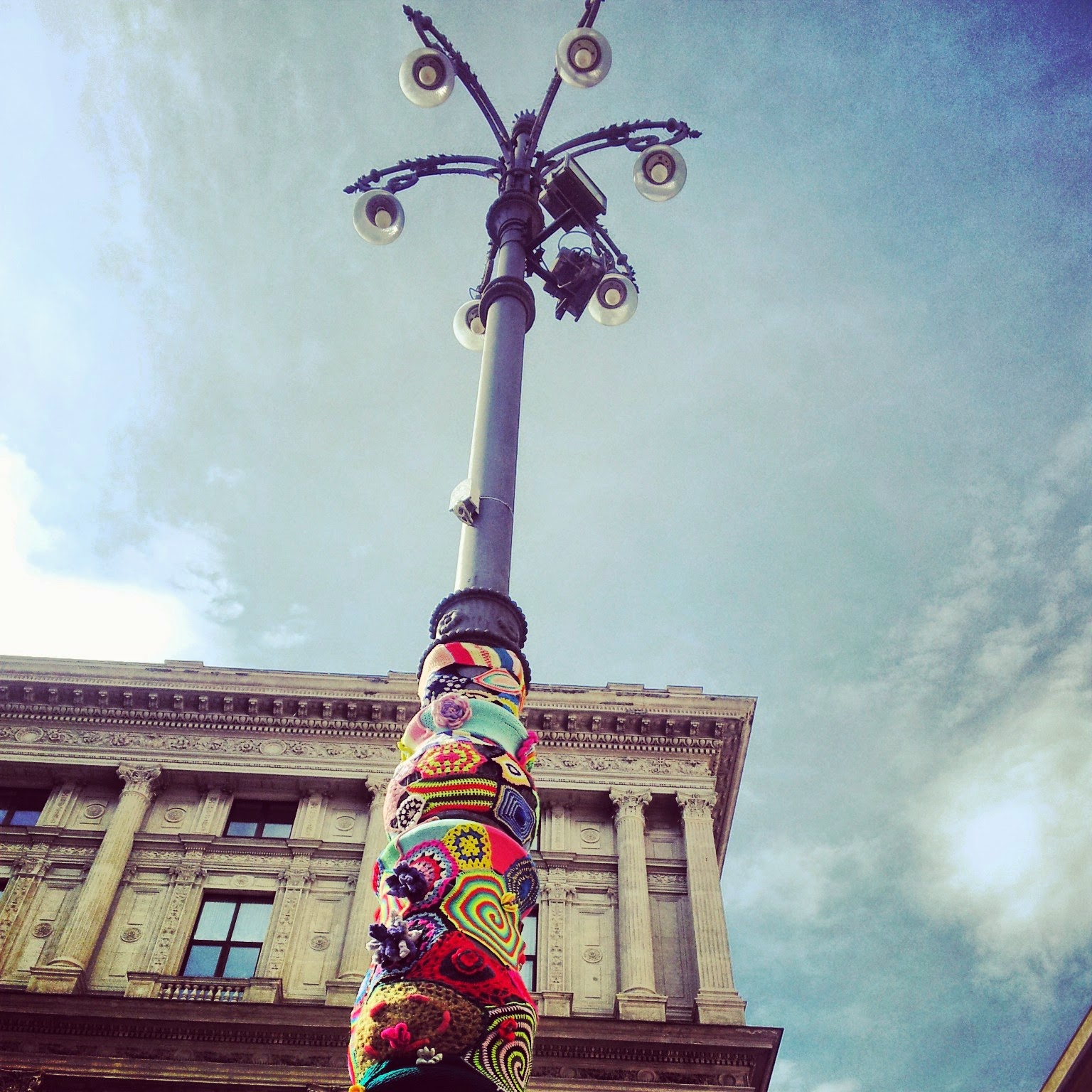 In Genoa, when you walk you always have to keep your eyes up: maybe you can find a shrine dedicated to Virgin Mary, or a window preserved from the times of the Old Republic, or maybe a trompe l'oeil. 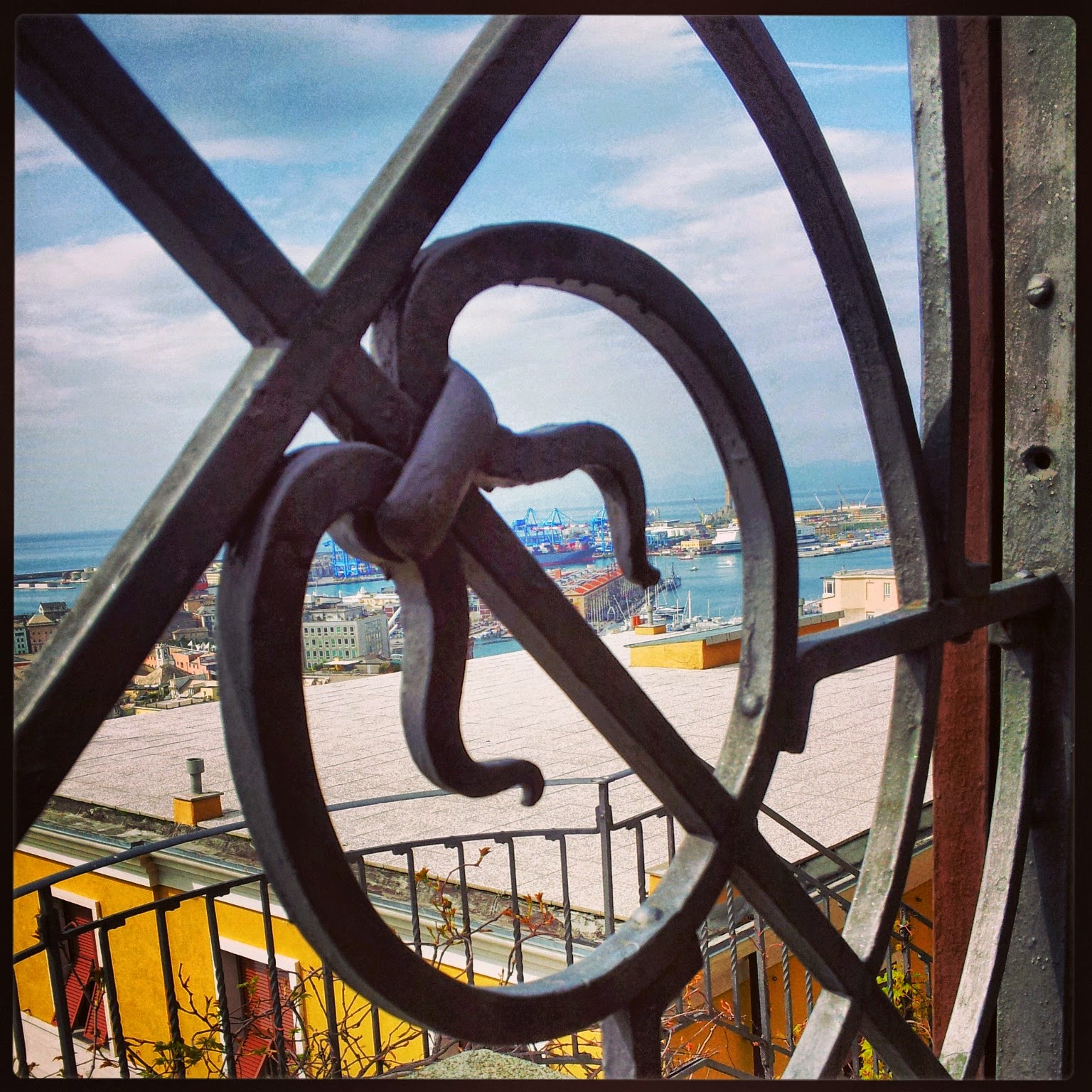 You may suddenly find yourself in front of a small church, a palace that stands out from the others, or some other little fané gem hiding crammed into the space of the small alleys.
Genoa being stingy is just a stereotype, but, just like the whole Liguria region, it is a very narrow strip of land, sandwiched between the mountains and the sea, and had to learn how to use the space for the best - not only in terms of efficiency, but also creativity. 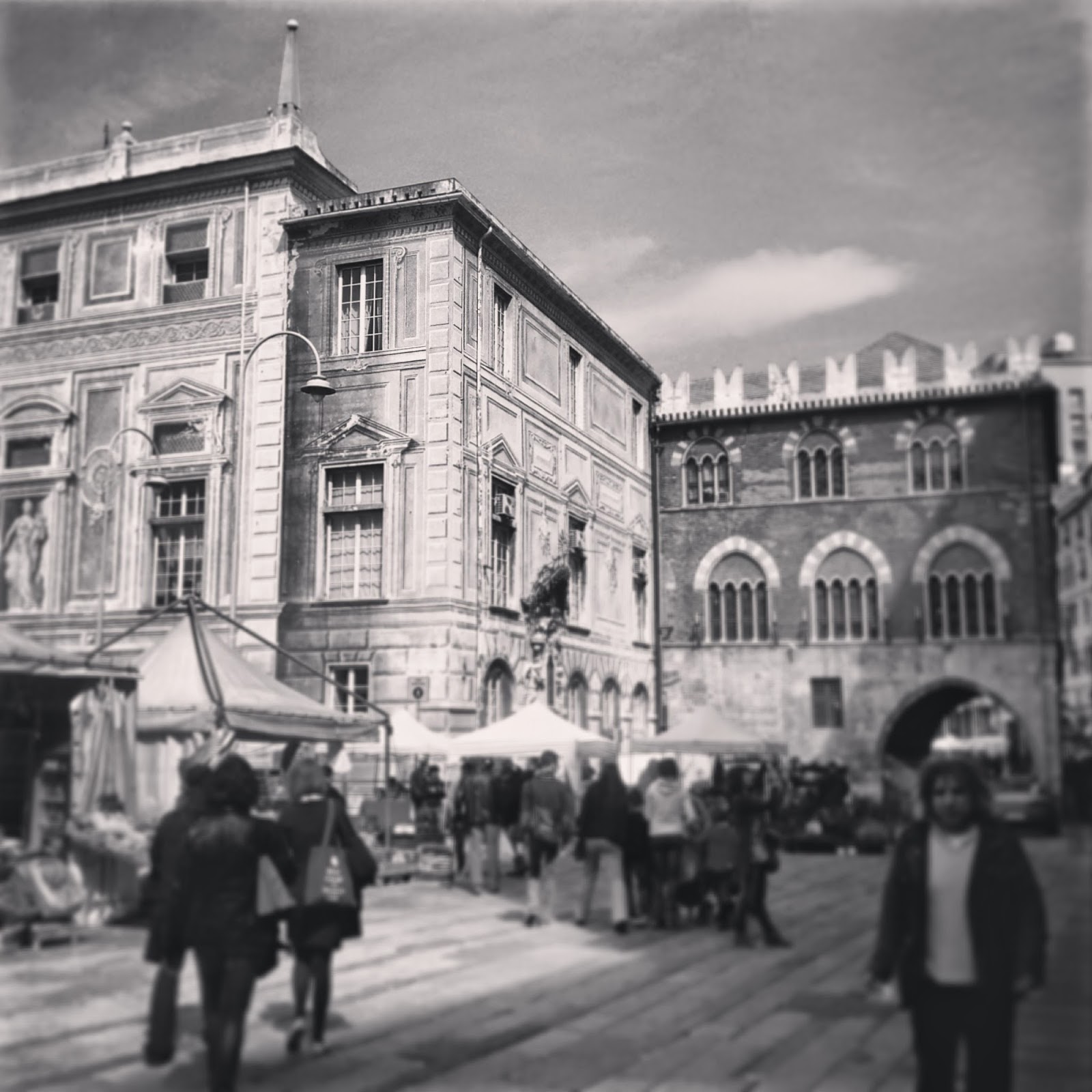 There is a variety of reasons and provisions in its buildings, which makes it original, leaving true to its sober attitude but at the same time giving it movement and personality.
And its old town is a maze in which it can be nice to get lost, getting to know a bit all its different souls, including some of the most borderline ones near the harbor; and then suddenly popping out in some hidden place that has unexpectedly wonderful memories of the moments of greatest richness of its history.

We started our tour at the Spianata Castelletto . 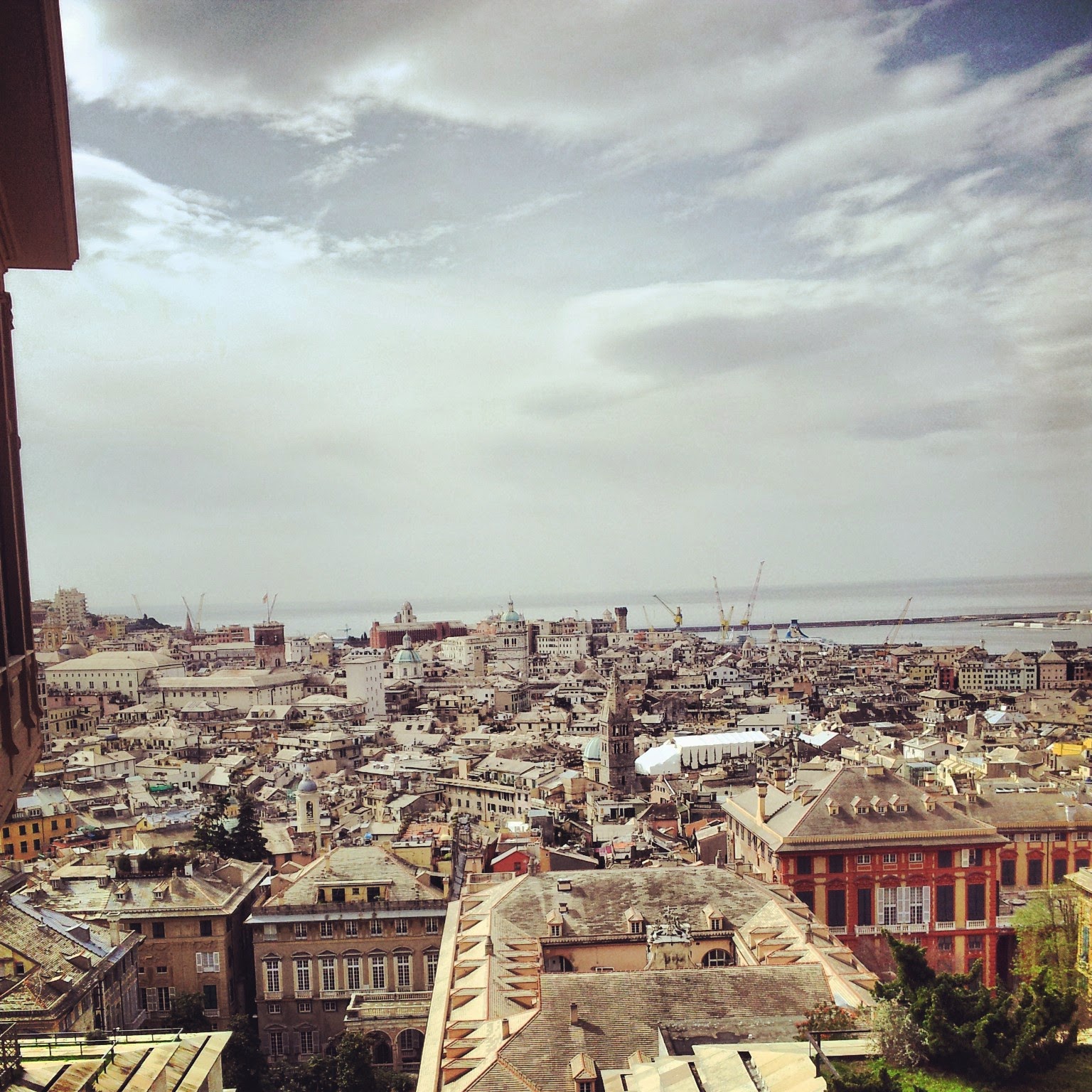 To get there fast you can take the elevator in Portello Square, that you can use with a bus ticket and which has a particular fascination: with its Art Nouveau style, it seems to take you for a ride in another era, not only some tens meters higher. 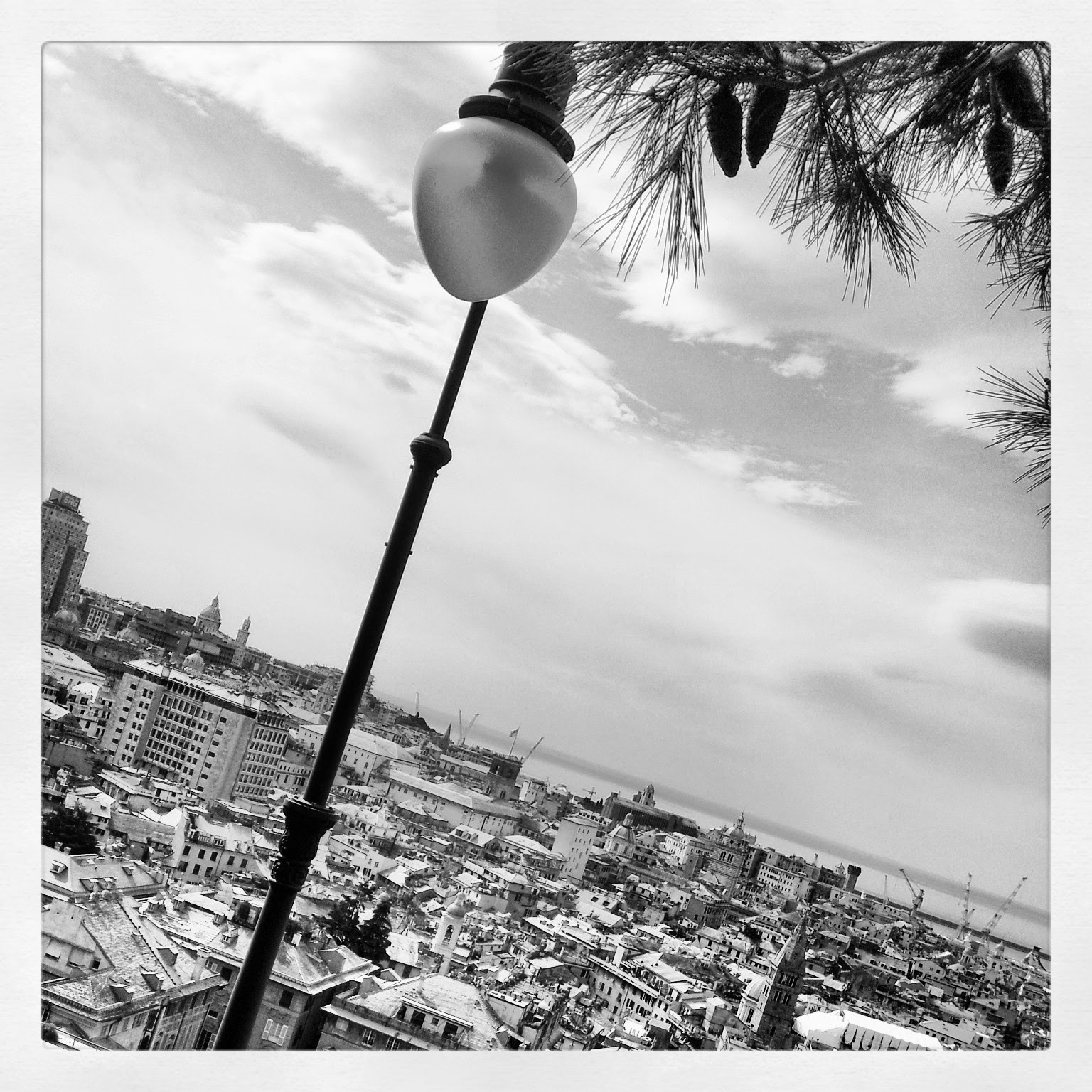 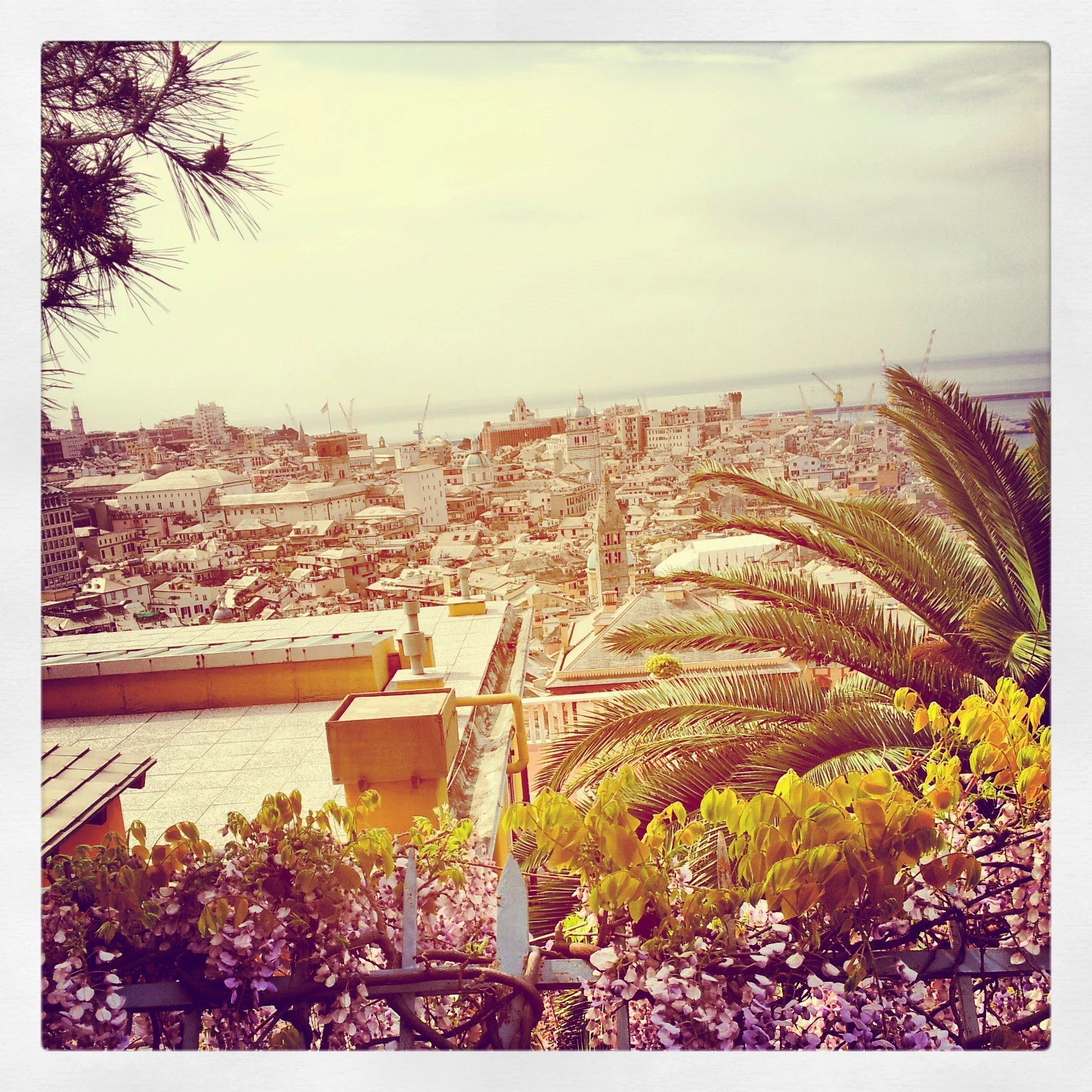 From Castelletto there is not only a beautiful view, but it also helps us understand of which tiles the mosaic of the city is made of: the commercial one of the harbor, the historical one in the center with its architectural splendor, the pragmatic one in the boundaries with its modernity, often a bit too spartan and a bit aggressive in its attempt to erode the rest of the space. 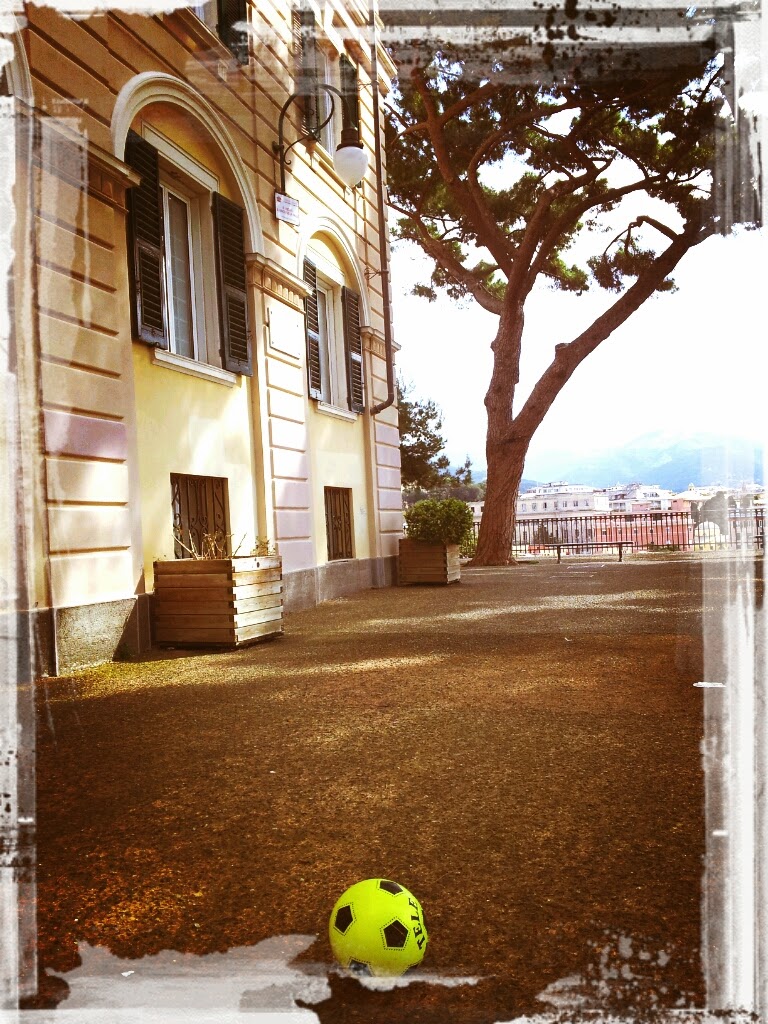 We stayed here for a while - on the benches watching the children playing, challenging (innocently or ironically) the sign that prohibits the ball game, and from the balcony to contemplate Genoa, photographing it and ourselves.

The Cathedral of San Lorenzo is the most important church in Genoa, and, in my opinion, also the most beautiful. 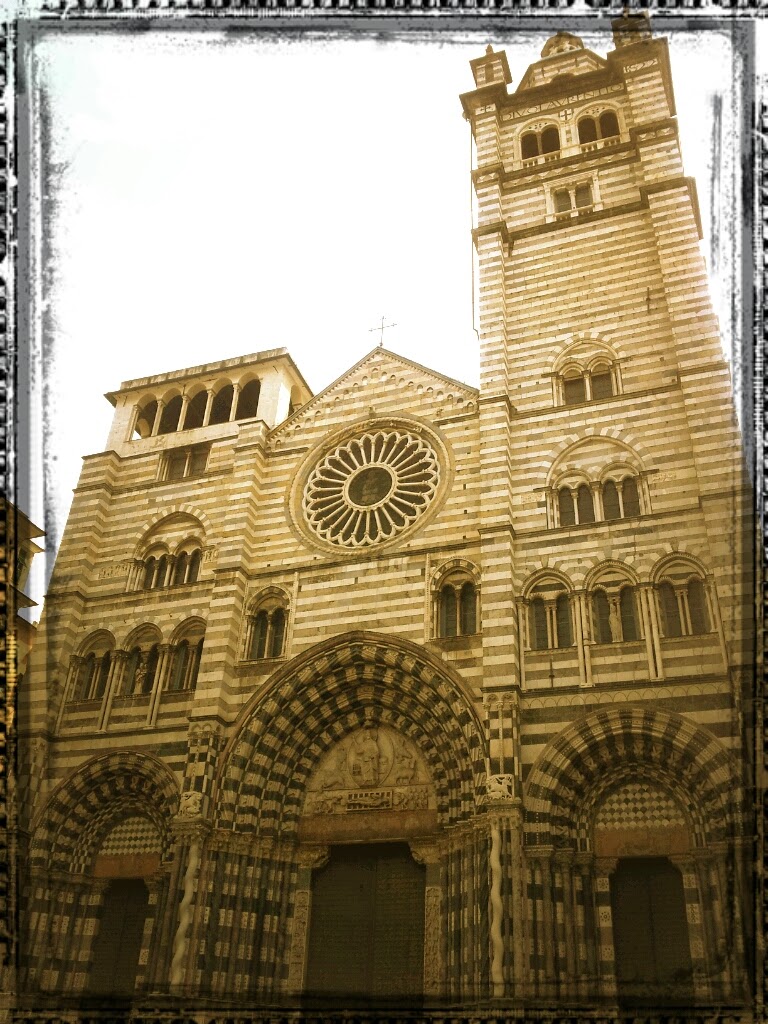 It's imposing and dominating, despite one of its two towers is incomplete due to the untimely departure of its architect. 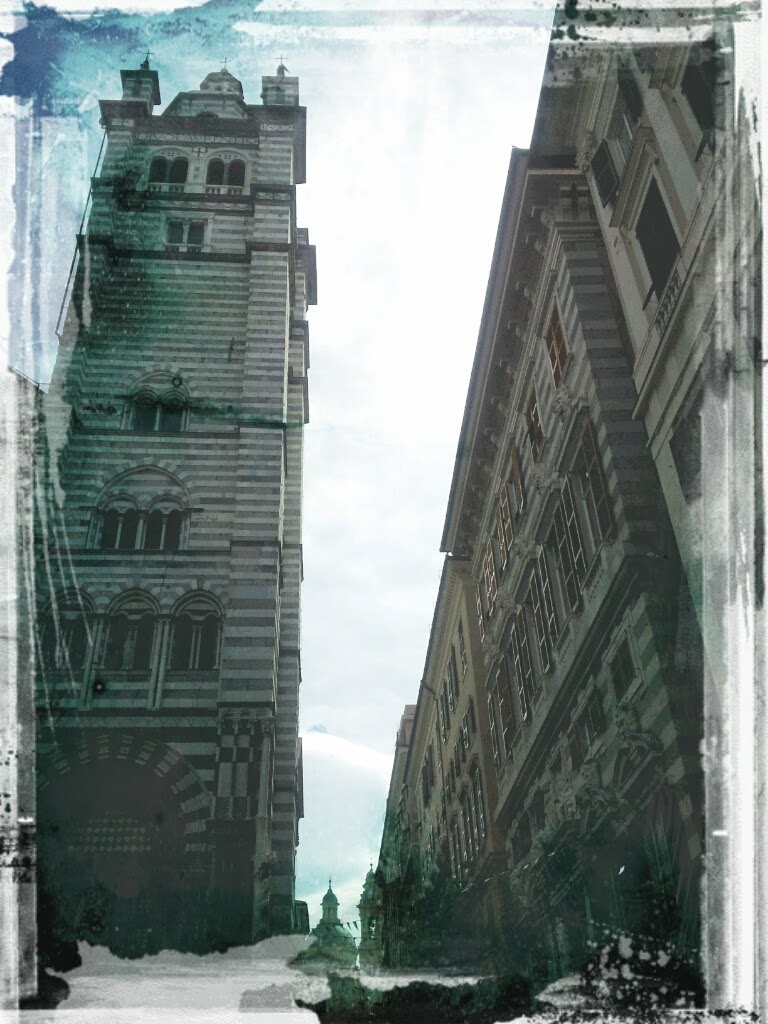 It is guarded by four lions and enriched by numerous carvings and sculptures. 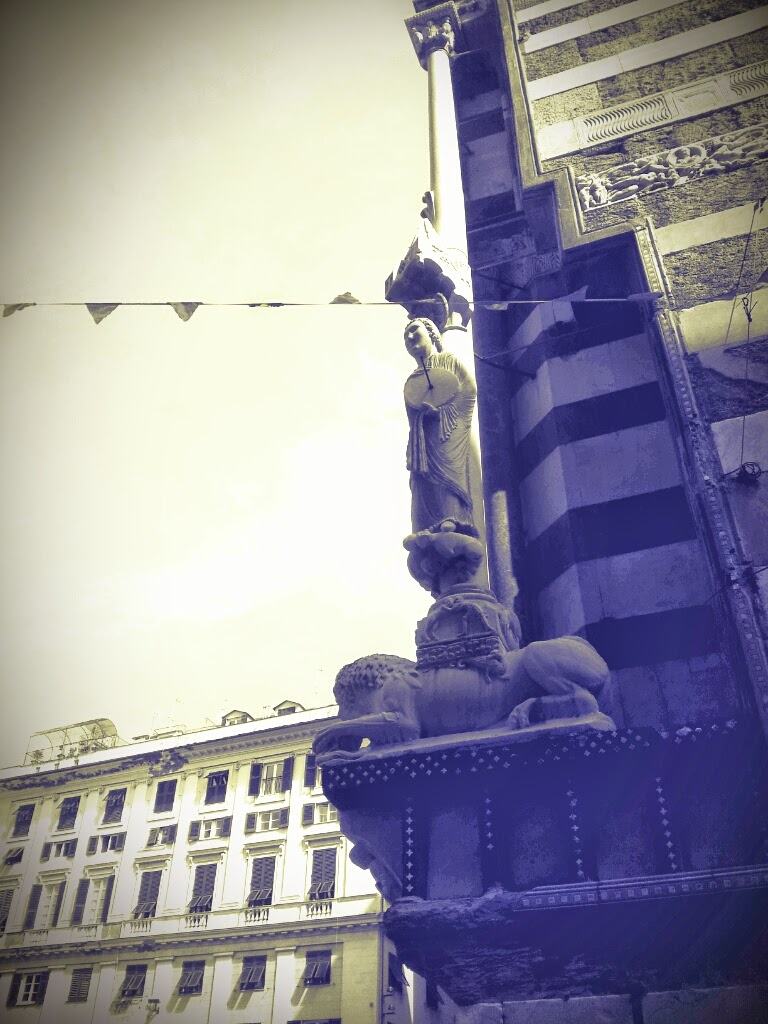 The style recalls a bit the French Gothic, but it has been customized with black & white stripes that are often found in Italian architecture of that period. 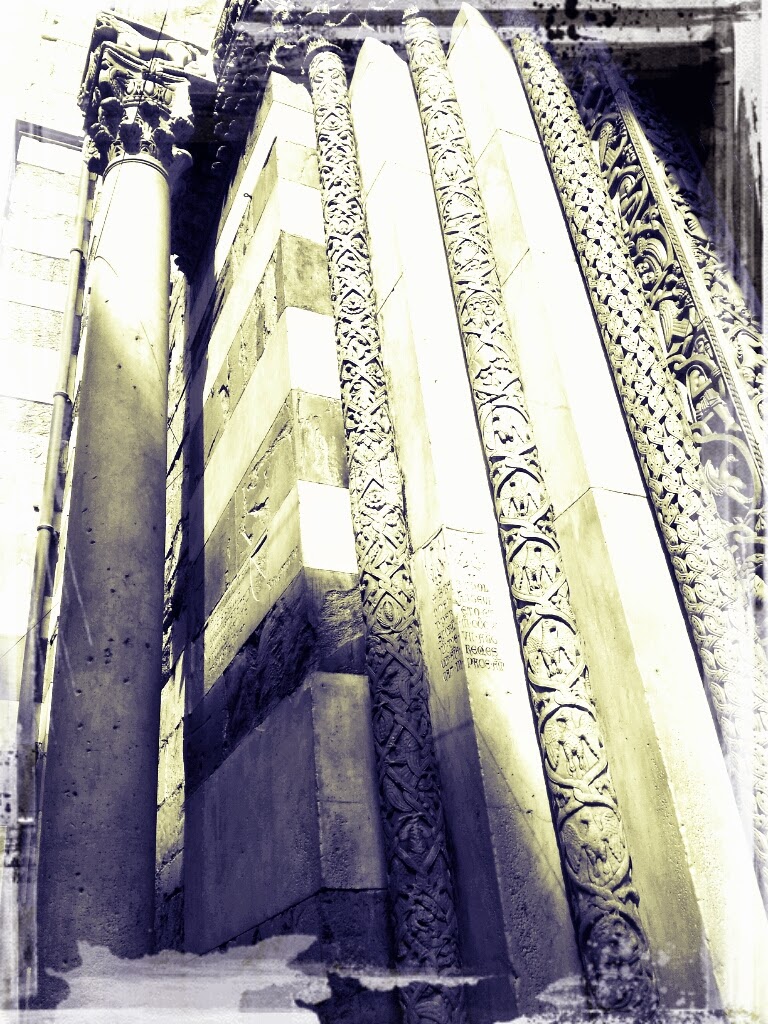 The interior is worthy as well, with marble and frescoes, and the curios thing of a couple of British bombs of World War II that had fallen inside the church, unexploded. 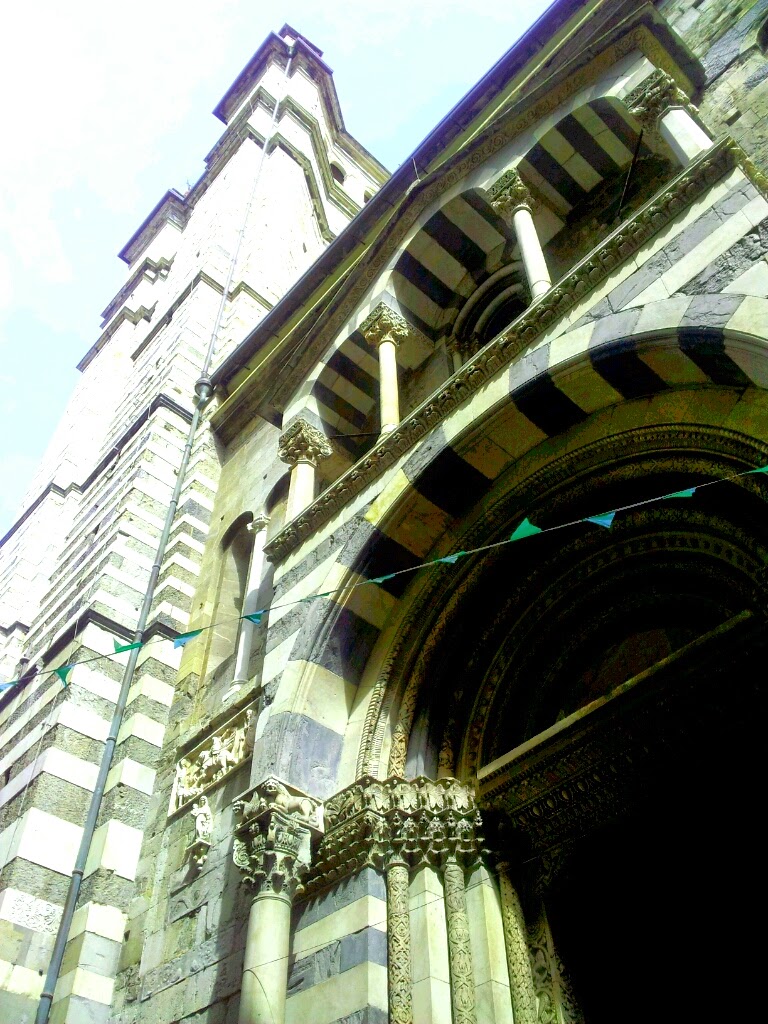 And, at some point, you will come out in Piazza De Ferrari . 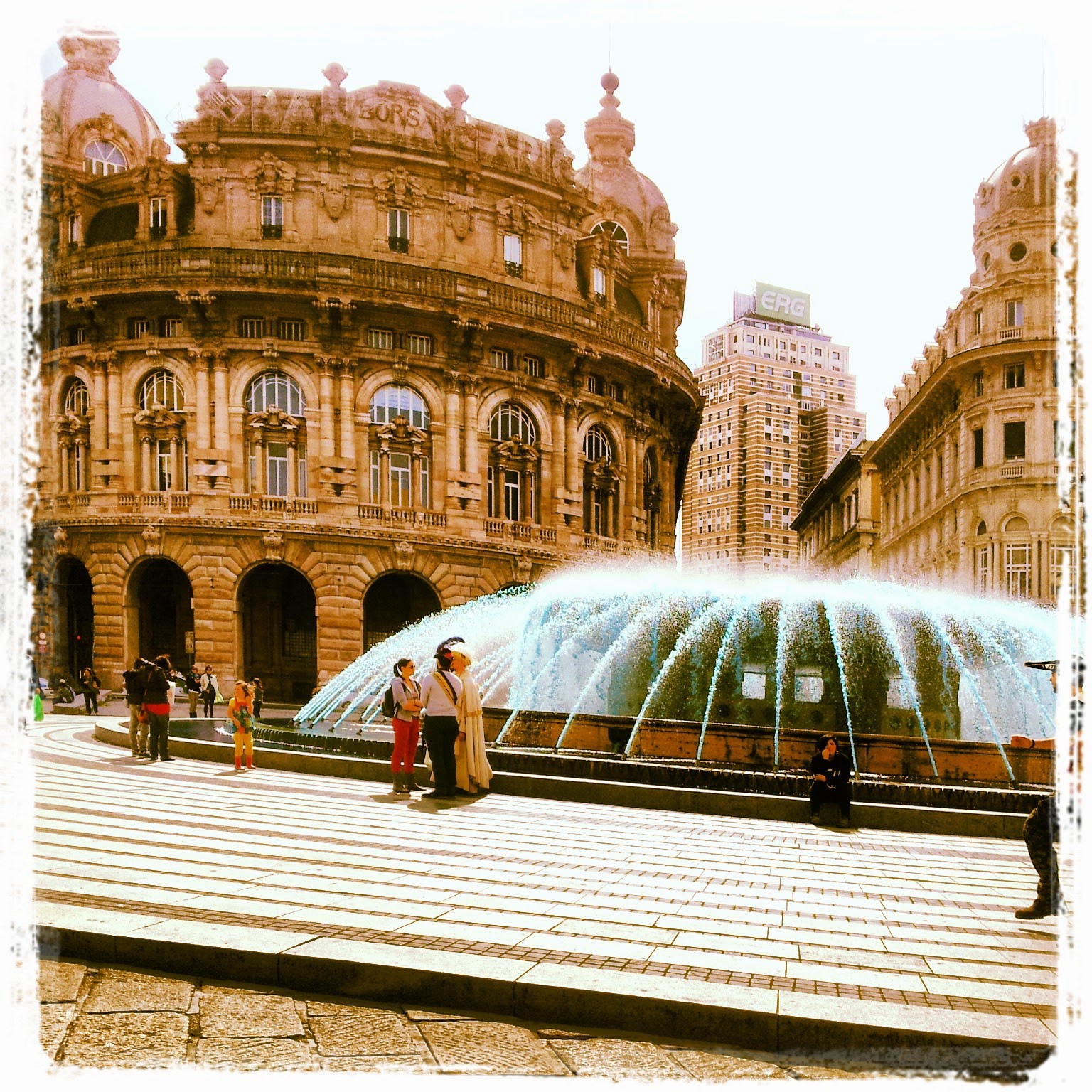 And, even though I've seen it numerous times, it always manages to leave me speechless.
It is large and airy, dominated by its large fountain in the middle which is like a jewel of water games. It is framed by the Palazzo Ducale, the Carlo Felice Theatre and the old Stock Exchange building, and offers a lovely view. 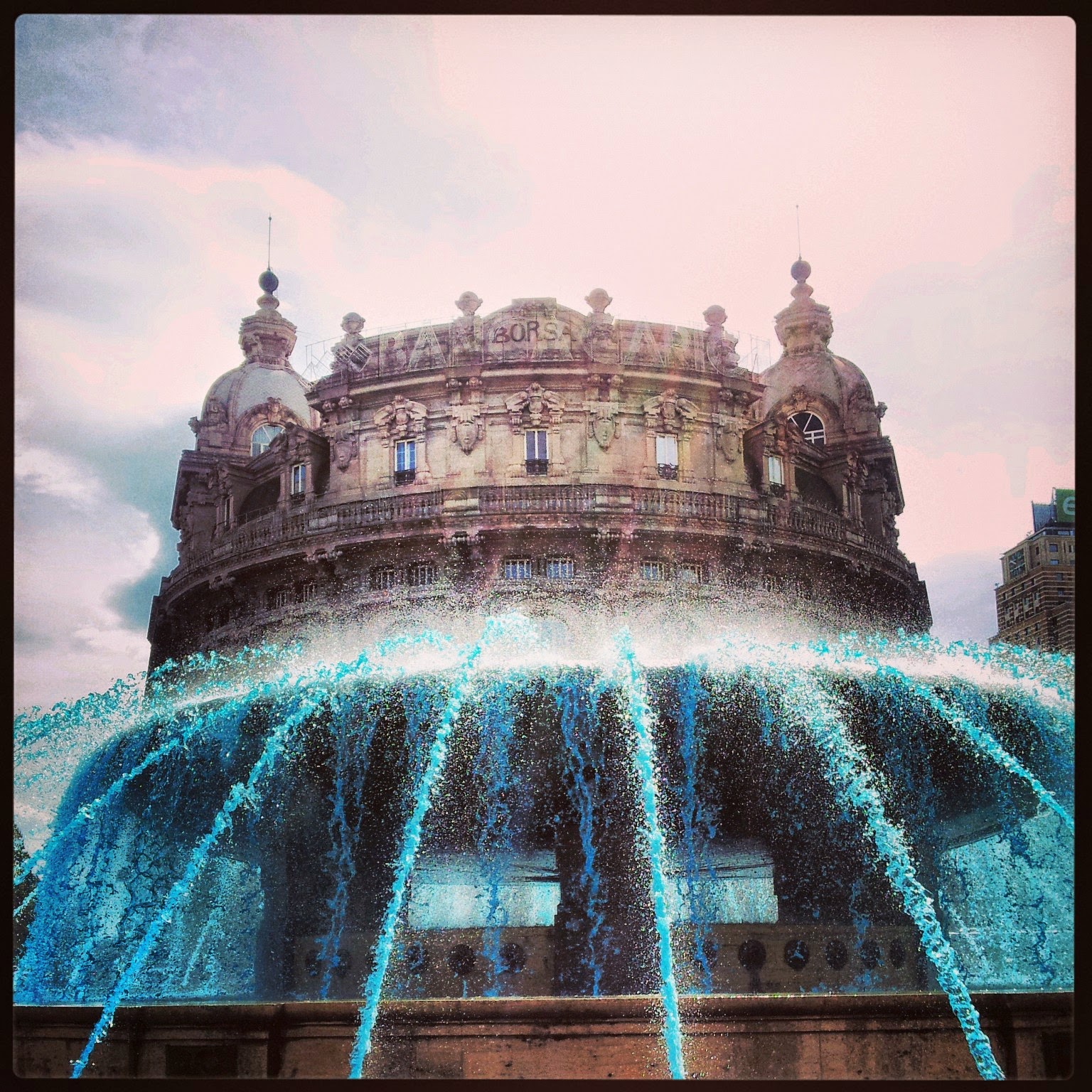 Today the water of the fountain was colored blue in honor of the International Day of Autism . Several cities have joined - for example in Turin, the Mole has been illuminated in the same color. 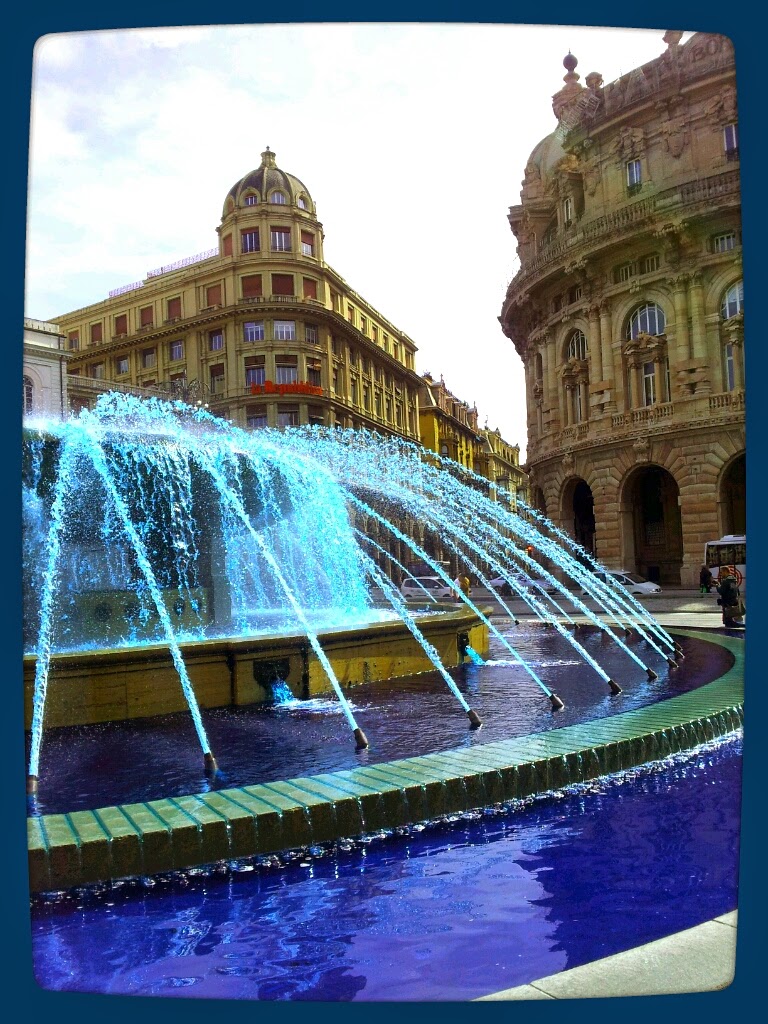 Piazza De Ferrari, with its broadness, almost seems in contrast with the more intimate and narrow spaces and that characterize the rest of the city, especially the old part; but it becomes in this way its heart, beating with beauty. 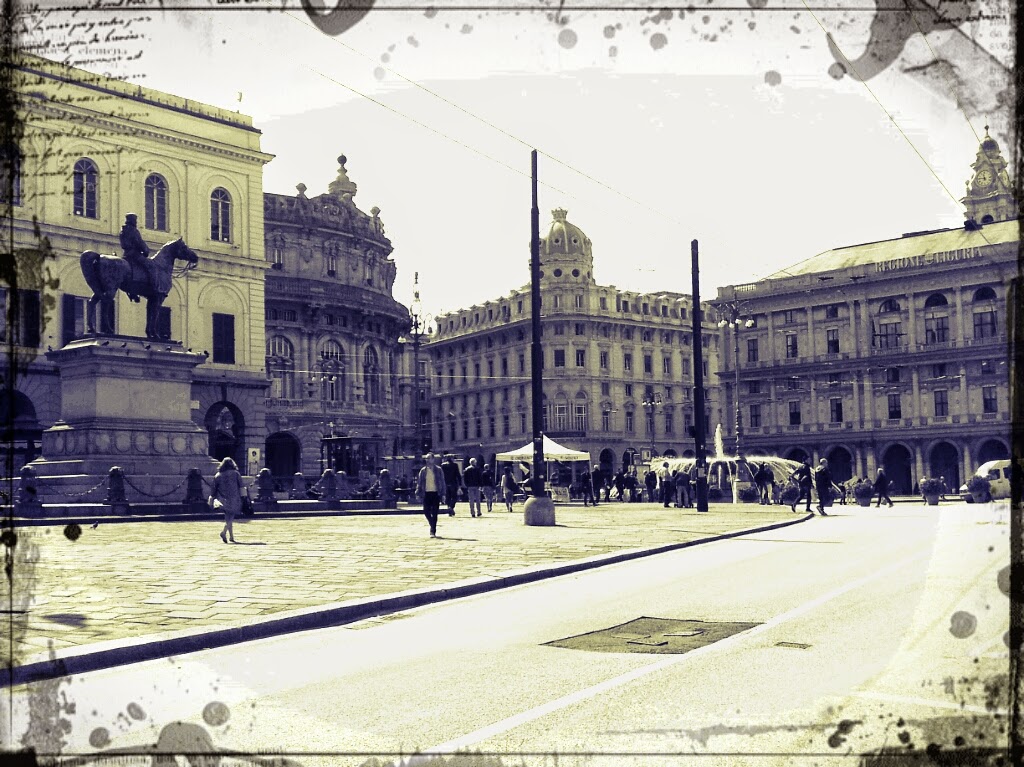 It's a kind of hub around which the different parts of the city wind: the medieval one around the harbor, the nineteenth-century one to Brignole and the Renaissance one.


The Old Port is another destination among my favorites, if anything to be able to breathe and see a bit of the sea. 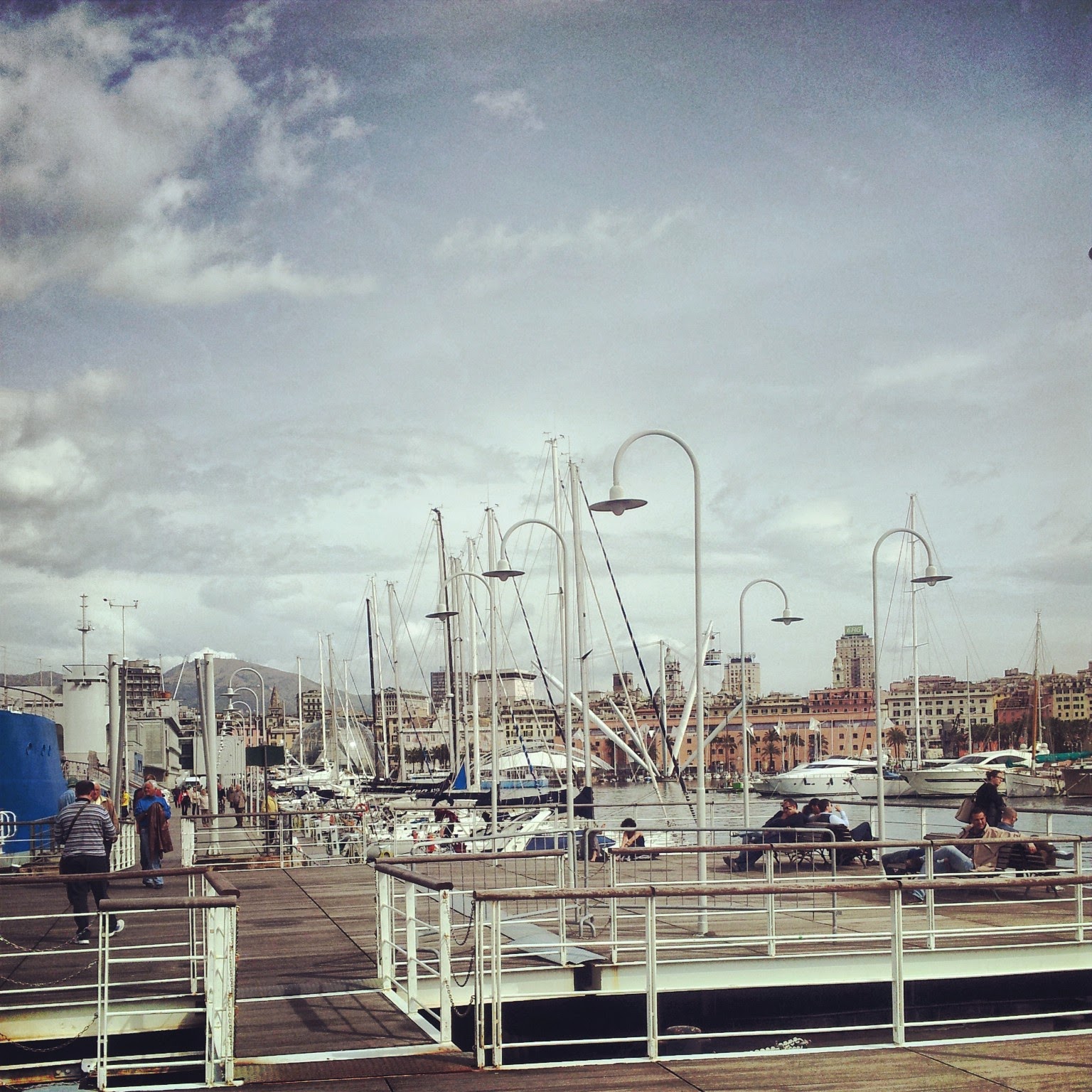 The sea inside a sea port is always a somewhat captive and sedated one, but, on a nice day in early spring like the one on Saturday, it was already possible to smell the salt air.
At the Porto Antico it is nice to sit on a bench to chat, or wander down to the barges that there are over Aquarius.
From here you can take a closer look to the Lantern , a historic symbol of the city, and pass alongside other two minor and more recent symbols, such as the Bigo (a panoramic lift with a very original structure, inspired by the eponymous crane used to load the goods at the port) and the Biosphere, a spherical structure of glass 20 meters in diameter that simulates inside a tropical ecosystem with butterflies, birds and ferns.
But the main attraction of the port is definitely the Aquarius, that is definitely worth a visit to see the animals and the simulated ecosystems. Personally, I have been there about 15 years ago, but I still remember a very pleasant experience. Surely it is an attraction mainly suitable for children but it also can be interesting for adults.

"Genoa is also the friends that see you from afar growing and aging
for example, the fishermen, whose face has wrinkles that look like a smile,
and whatever you confide them, they have got to know it already from the sea "
(Fabrizio De Andrè - a songwriter and storyteller from Genoa)
Pubblicato da Serena Chiarle a 23:25