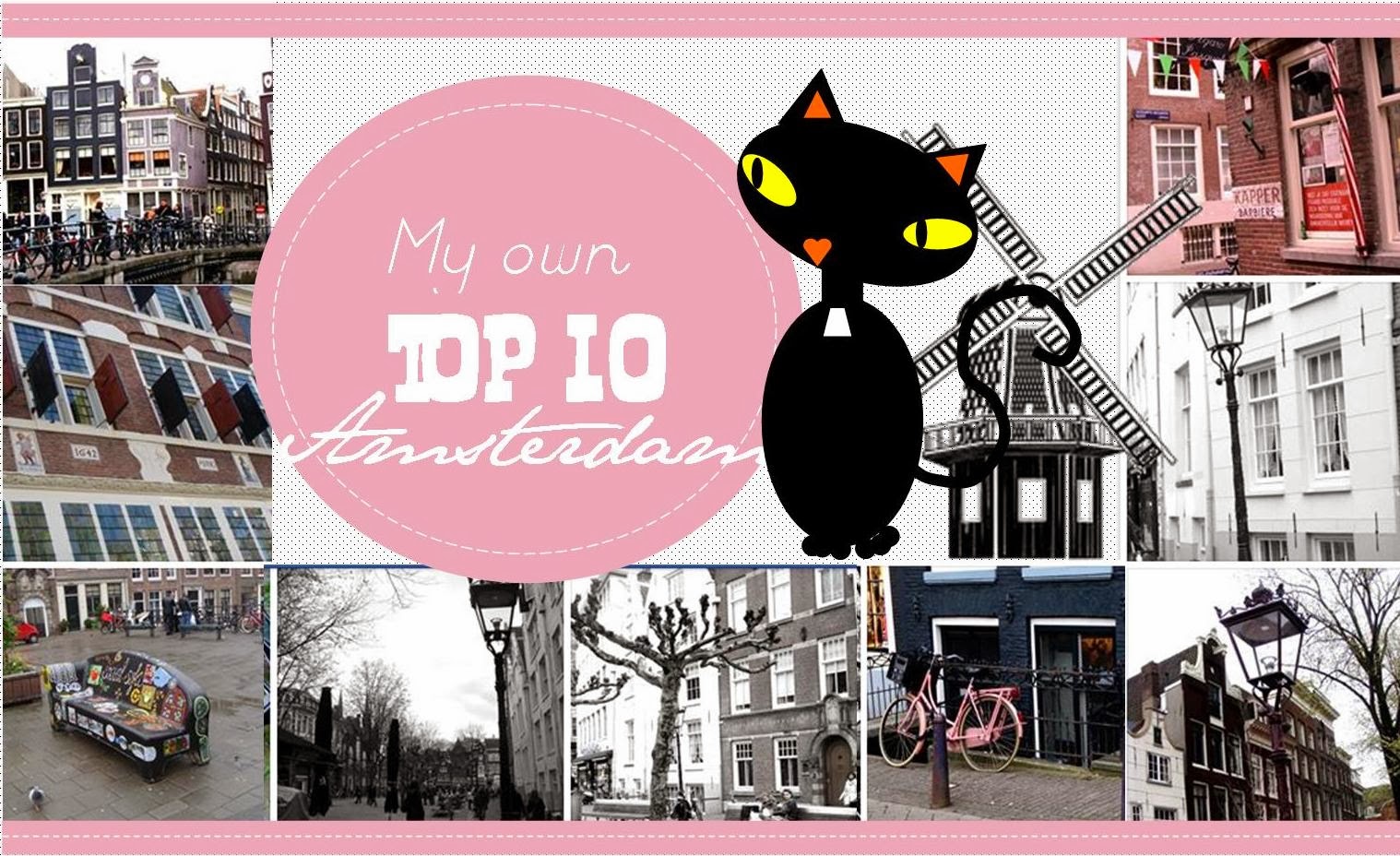 [1] Spui square
I so loved this small irregular square! It has such a cosy atmosphere, with its streetlamps and wooden benchs. I'd say it's my favourite corner in Amsterdam.
On our first day there there were also some stallings of artists selling their paintings. I guess we can call it the Montmartre of Amsterdam ;)
A notable thing of this square is the bronze statue of a little cheeky rascal, which is called Het Amsterdamse Lieverdje ("The Amsterdam Brat"): it's the symbol of a protest motion happened in the 1960's against the ruling class.

[2] Oude Zijde
It's literally the "Old Town" part. It's the most ancient residential area of the city, and every corner of it is amazing.
Amsterdam's architecture is pretty unique and it also is very homogeneous, there aren't any big contrasts: there is always the same theme recurring, the same module of buildings tall and narrow, with as many as possible variations, expecially in small and discreet details - but please don't see it as a minus! In fact it gives it a very pleasant harmony.

[3] Begijnhof
Every time I visit a Begijnhof, I'm tempted to become a pious woman myself. These places give such a sense of peace and balance: silence, green, cosy little houses detached from the rest of the world - the ideal world for a cat!
Ok, perhaps you are wondering what a Begijnhof is?? There are quite some in the Low Countries and their are used by Beguines, who were a Christian lay religious order. It is basically a collection of small buildings with a courtyard, and it's usually surrounded by walls and secluded from the rest of the city by gates, in order to guarantee to the women the necessary isolation for prayer and meditation.
But they were also very active in charity and helping poor and ill people.
Nowadays the order no longer exists and the houses are rented at a symbolic price to Catholic widows and students (just women).
There is a small door from the street to access this oasis of peace, and it's really surreal, as it seems you are stepping into another world.

[4] Dam Square
This has been my (almost) first sight of Amsterdam as our hotel was there [yeah, I admit it: we were staying at the Grandhotel Krasnapolski! No kidding: check out the offers on line - they have a less "noble" wing where you can find rooms at affordable prices, more or less at the same amount you would pay an average 3 stars hotel. These rooms of course also look like the ones of an average 3 stars, but still the location is very convenient].
Dam Square is the most important public space in Amsterdam and it's probably also the widest. Like most central squares it's made of cobbled paving and, besides many people, you can also meet quite many pidgeons - but it was not "invaded", as my guide was saying.
The most notable building is the Royal Palace on the Eastern side of it. It's austere and I've found it a bit gloomy. It was actually supposed to be a town hall at first - then Napoleon decided it had to become the residence of the king (but it was for his brother, after all) and nowadays the current monarchs don't really agree with him, as their official palace is the one in Den Haag.

[5] Herengracht
It literally means "The Lords Canal" and it's the area where the richest citizens used to build their residences.
It still is a bit posh and upper class, including antiques shops, and it can really show some magnificient pieces of architecture from Renaissance and art noveau.

[6] Koningsplein
Ok, here it is the shopping street!
It starts from the Flower Market and goes up till Leidseplein, a square where you can find pubs and places where to eat/drink and spend the night.
Just behind it you can also find any sort of ethnic restaurants. I love ethnic food, expecially Indian, Japanese and Mexican - so we hung around here a lot.

[7] Oude Kerk
It's the oldest church in the city and it's the one I've liked the most. It's 800 years old!
Amsterdam has 5 main churches which belltowers dominate the landscape, and they are all very similar in style - but the Oude Kerk's bell tower was my fave.
The inside is actually quite simple, as iconoclasm during Calvinist rebellion robbed it of all its statues, but I've liked:
- the wooden roof
- the baroque organ
- pooping peasants sculpted in the chorus seats
- the motto written above the transpet where they used to celebrate weddings "Get married soon, you will have time to regret it"

[8] Waterlooplein
It's the old Jewish quarter and has some interesting sights.
Plus there's the Rembrandt House (but I haven't visited it, so I can't tell you about it) and a quite popular flea market.
And a couple of very colorful benches decorated with mosaic technique which are cute!

[9] Anna Frank House
WWII is a subject I'm very sensitive to, and I am always interested to get to know more about it - as knowledge is the only way we have to not forget.
I had read Anna Frank's diary in my teenage, and I think every girl of that age should: you just cannot help to feel empathy with her, as her dreams, hopes and wonders are the same of everyone at 15 - plus she was putting them down on paper with grace and witty sensitiveness. Identifying somehow with her makes the tragedy feel closer, gives you the perception of what it actually meant.
And visiting the house where she and her family got to stay hidden for over 2 years makes it feel even more real. The rooms have been just partly preserved in their original aspect, but what it cannot be shown anymore is integrated with documentation and witnesses.
It's an interesting and touching visit and I totally recommend it.
I suggest to book in advance on line, because the queues are always very long.

[10] Homomonument
It's a very simple one but I think it's worth to be mentioned because it has an important meaning.
It's just a big pink-ish triangle of granite on a square, but the pink triangle was the symbol that used to distinguish prisoners of the Nazis who were arrested and brought to concentration camps just because they were homosexuals.
Aside of it there is another smaller triangle in remembrance of the victims of AIDS.
Pubblicato da Serena Chiarle a 00:01