For Easter 2012 my goal was to visit a European "capital" (more or less officially so) that I hadn't seen (shamefully?) yet.
So Ginger Cat & me chose Amsterdam.
It's a city that has always affascinated me, although I've always postponed my visit because of - ahem, a totally silly reason. If you promise you won't laugh, I will tell you.
Deal?
Ok. I have to confess I am a bit (...) scared by bikes. Ehm. I used to ride them as a kid; but nowadays I'm just not sure I would even if I were paid. But, besides being afraid of riding a bike myself, I'm scared about bikes ridden by others, and...
Hey!! You had promised you wouldn't have laughed!!!


Ok.
So well.
In Amsterdam there actually are bikes just everywhere. It's not just a stereotype. You can also spot cars and scooters of course; but bikes totally rule. I'd say it's the wisest choice for transport in Amsterdam as the streets are usually very narrow and parking lots are as rare as diamonds; but we lazier Italians in places that have similar structure end up using mopeds *lol*.
I confess I've been admired to see how skilled Dutch people are to ride them: they are totally multitasking, and they can do just anything else while riding their bikes.
And they ride very very fast. And they just don't stop: if you happen to be in their way, they will obviously ring the bell and try to avoid you; but they won't stop.
Argh.

But besides this, I am absolutely happy that I've managed to overcome my "fear".
I've loved the city.
It's the kind of cities I usually dig in, because of the architecture and the atmosphere, which make it so cosy, beautiful and somehow belonging almost to another time.
We basically strolled around taking tons and tons of photos.
Now it's just difficult to name which places I've loved most, because there aren't specific areas: all the ensemble is stunning and every corner, alley and channel contribute to make it unique.
[anyway please check my post about my own personal Top 10 of Amsterdam's spots]
I guess the reasons why Amsterdam is worldwide famous are its most trasgressive sides - which have surely brought tons of tourists there, but that are not the only reason why this city is worth to be known.

My most vivid memories of this trip include...

1) Dam Square all covered of white feathers!
Amsterdam has been one of the cities that have joined the International Pillow Fight Day event, and it seemed that quite many people have joined! Unfortunately when we arrived it was all already over. 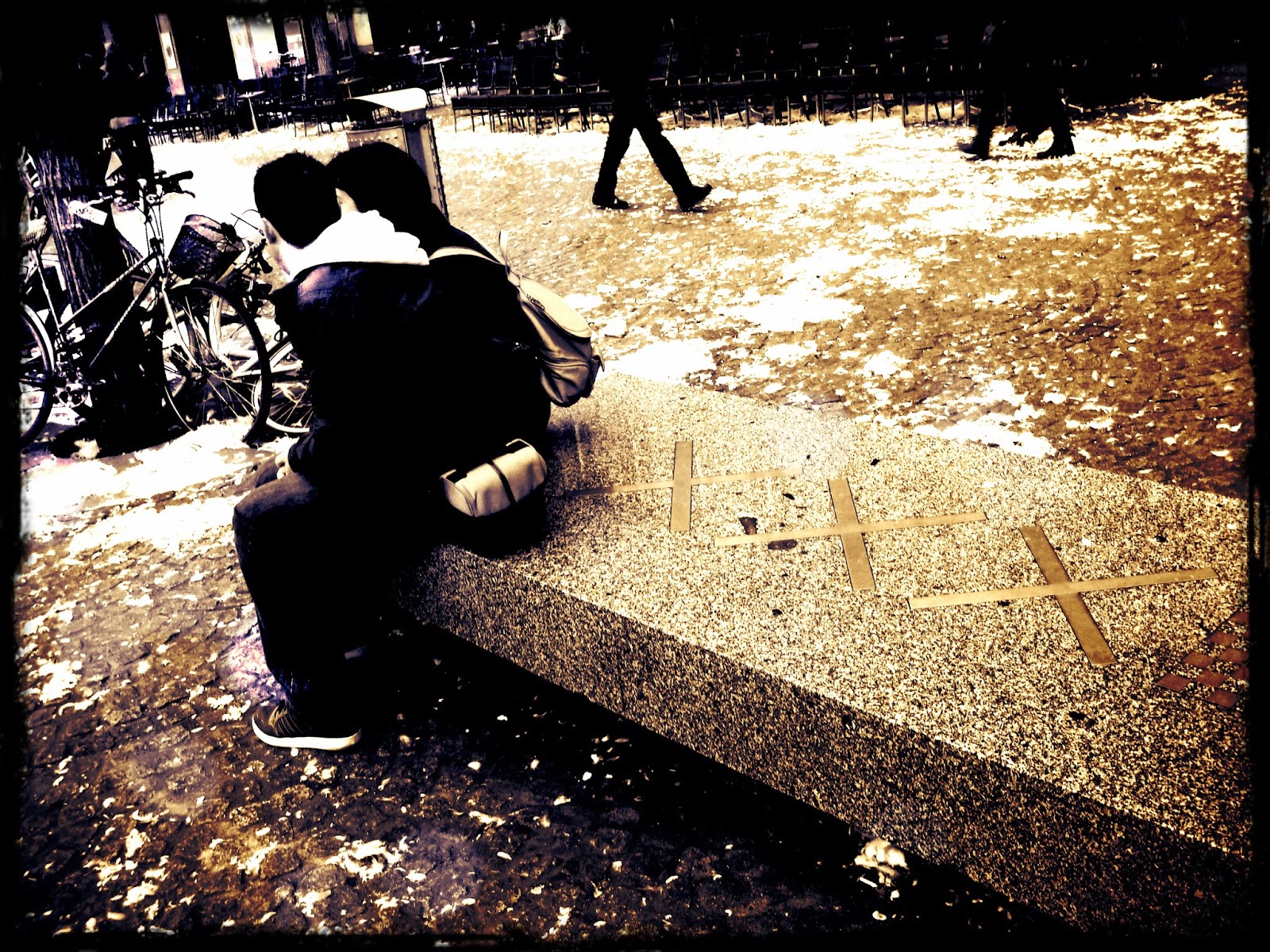 2) Cat Museum in Herengracht: a discovery made by chance, that I obviously couldn't have missed!
Well, actually we didn't even know there was a Cat Museum in Amsterdam: it wasn't mentioned in our guides and we happened to read about it on the Easyjet magazine during our flight. Of course we got all excited about that - but maybe a bit *too* excited, as we forgot to note down the address :(
And in the leaflets our hotel was providing it wasn't mentioned either, so we had kinda given up about it, when, while we were heading towards the Nine Streets (and taken a wrong way to it) - ta-daaah! we bumped into the pretty cat's dérriere that is the Katten Kabinet's logo!
Call it destiny's sign, uhu?
The museum is quite small but really worth a visit. It's a collection of paintings, drawings, litographies, statues, posters and any other possible forms of art representing cats as subjects - including some real cats, as of course you all will have to admit that we are living pieces of art!
This museum has been founded by Mr Bob Meijer in the memory of his beloved cat, J. P. Morgan, who has been by his side for 17 years (well, or perhaps rather on his lap, or on his bed, or on his table while he was doing stuff ... as actually being "by his side" is not much of a cat-thing).
The location is a private house from 17th century, which elegant interior design has been preserved - so admiring the classic furniture, the ceiling paintings and the wall appliques is one more reason to visit it. 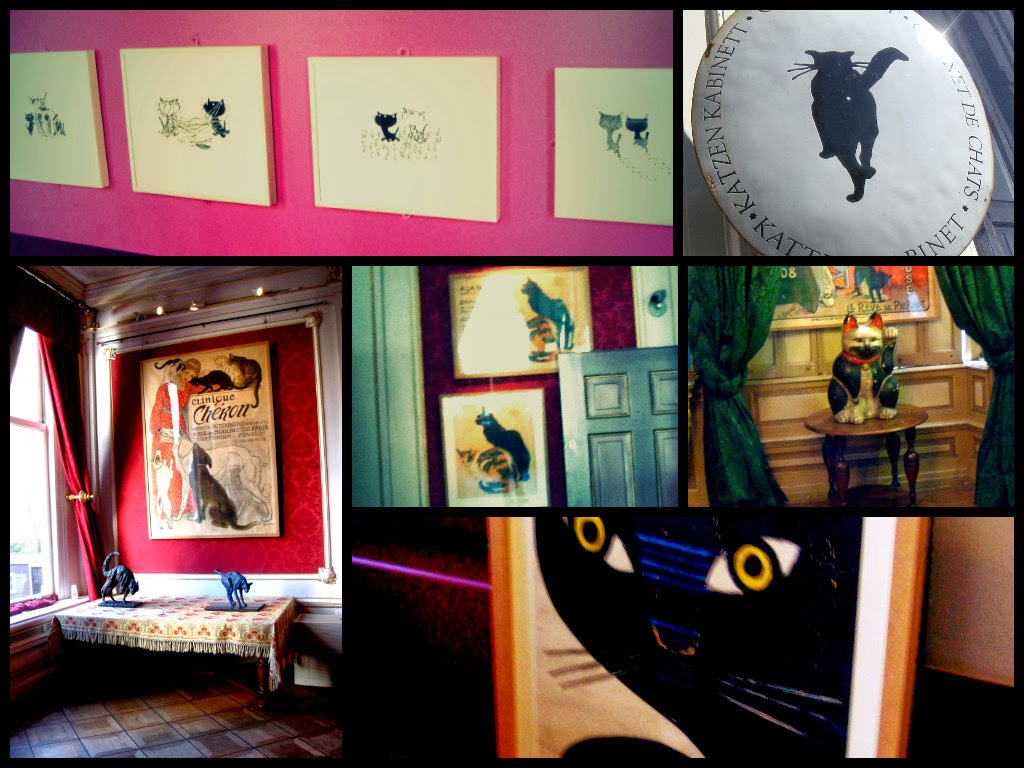 3) cats (real ones) just everywhere
With this Amsterdam has proved to be a very cat-friendly city - and a very liberal one for this aspect too!
In at least 4 places where we went to eat/drink we found cats - sleeping, welcoming guests, complaining because we were sitting in *their* spot ... but mostly sleeping ;)
Needless to say I've loved it! 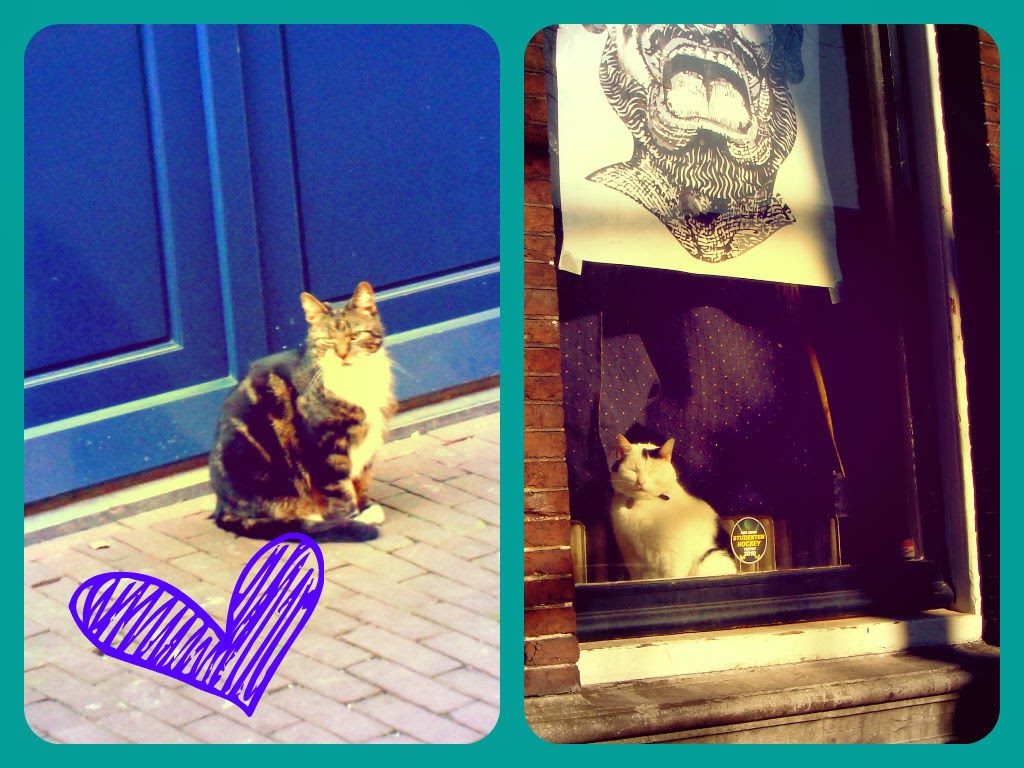 4) Pannekoek - a.k.a. my favourite Dutch dish
They are large (of the size of a pizza dish) and very thin pancakes which can be sweet (with chocolate, treacle, apple butter or simple powdered sugar) or savoury (with incorporated cheese, bacon and/or veggies).
I've eaten my fave one at Pancakes! - a cosy small place near Prinsengracht decorated in blue Delft tiles. It had Gouda cheese inside and it was yummy.
We also tried some sweet ones once for breakfast with chocolate - but, man, too huge!
[Another Dutch speciality for breakfast, by the way, is a toast with butter and chocolate sprinkles on *yum*] 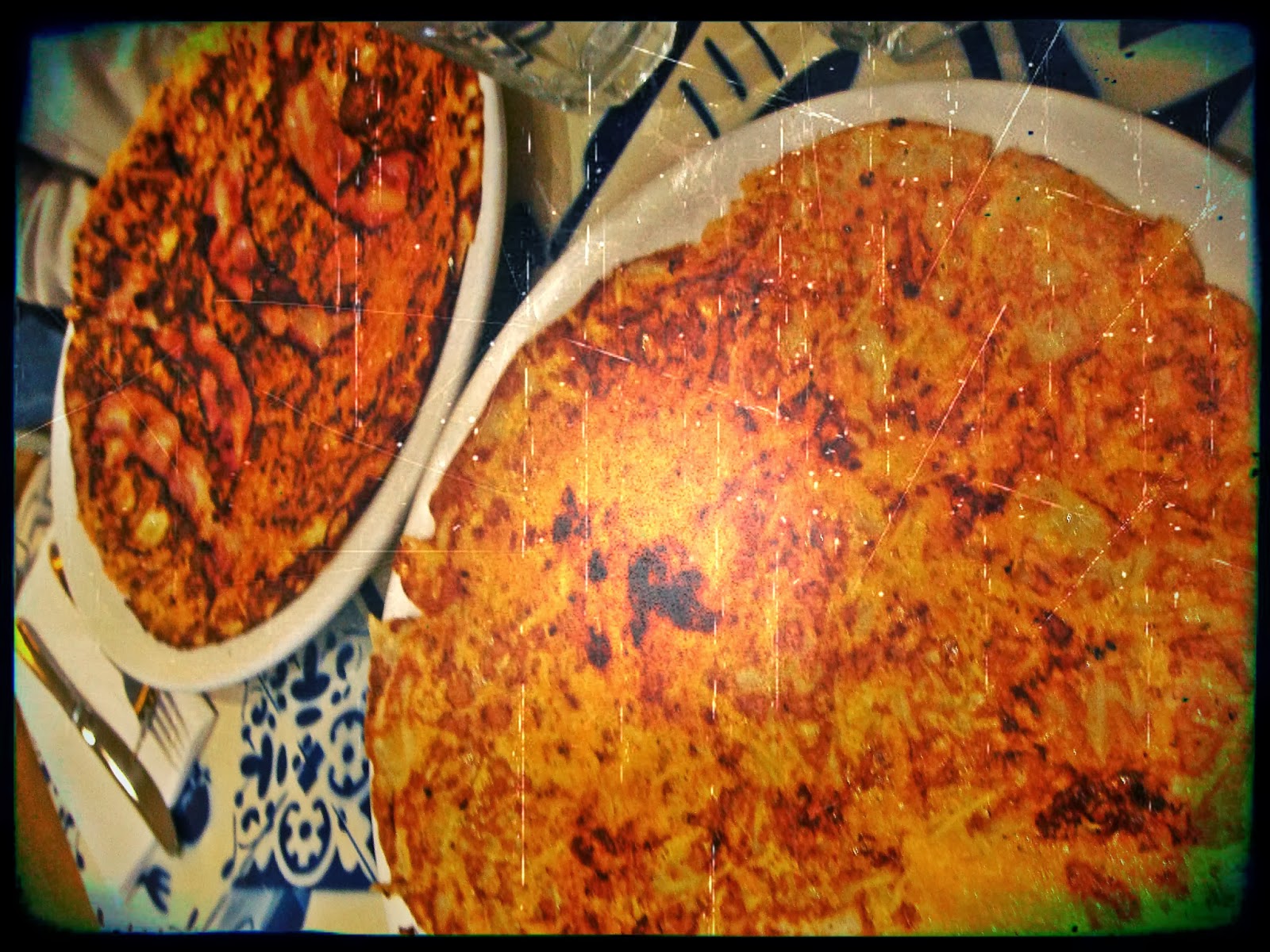 5) smells - a city's calling card
During all my travels I've noticed that every city has its own peculiar smell: London smells of chips, Lisbon of grilled fish, Bruxelles of waffles and so on. I think a smell is a determining part of the personality of a city.
And Amsterdam's smell could be sensed in Amsterdam only, indeed.
... Weed, of course ;)

6) Red Light District - looks like the "XXX" in the Amsterdam's logo get quite another meaning here...
Think whatever you want about it: it totally is charachteristic and you shouldn't miss it. Anyway, even if you'd want to miss it, or you wouldn't care, you'll see you'll just end up bumping into it, because it's not like there is a border line or something: you just keep on wandering along the streets and all of a sudden you see someone barely dressed sit in a shop window, doing sexy dances or pouting bored. And you start to wonder whether it's a male or a female...
Then you turn around and see a condomerie selling condoms of any colour, flavour and shape (yes, shape!) that you could ever imagine (and beyond). You turn around again and see dozens of sexy shops, where you can find tools that make you feel so naivy, because you keep on wondering in which openings they should be put.
So once again - think whatever you want about it, but it will surely leave you an impression *lol*

7) Cheese!! - that makes me smile
I'm super, utterly gluttonous for cheese, really. When they ask you that sort of questions like "If you had to eat just one kind of food for the rest of your life" - well, the perspective of giving up anything else would make me sad, but, if any, my answer would be cheese.
And of course cheese is one of the most popular Dutch gastronomic productions.
In the most touristic areas you can easily find shops who sell cheese only. The classic stuff like Gouda here can be found with some variations on the subject: I've bought a slice of pesto one, which, besides being so green you fear it could transform you in Hulk, was really tasty. 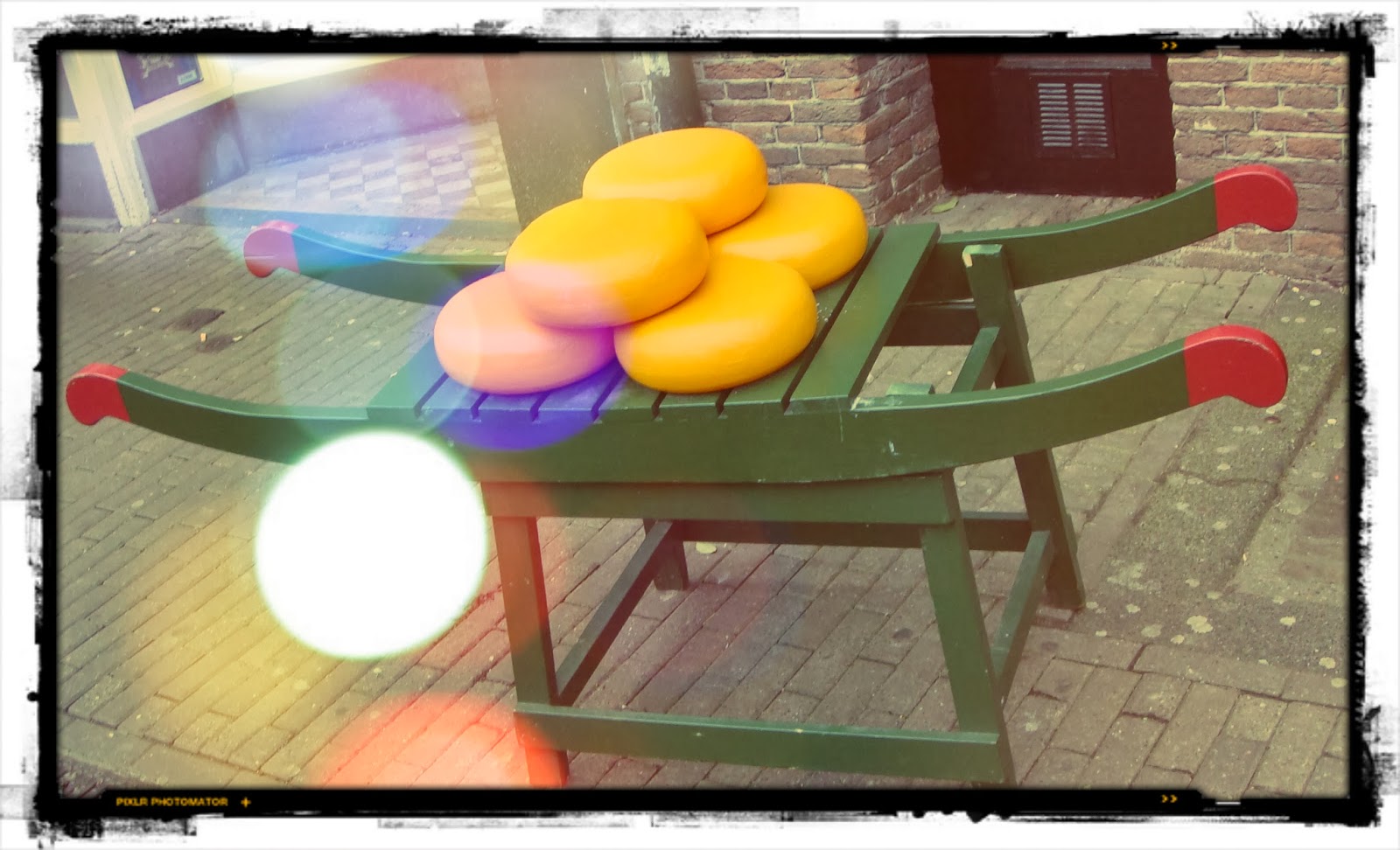 8) Flowers - in their language Amsterdam just gets good remarks
In spite of being April, the weather was still very chilly and unfortunately there wasn't much in bloom, but still we could enjoy hanging around the Bloemenmarkt, the floating floral market, where you can basically buy bulbs of any quality of tulips (mostly) or daffodils.

9) the best shop of my favourite jeans brand (G-Star)
To be honest, I'm not much of a shopaholic for what concerns clothes. I can do crazy buying sprees with stationery, books and craft stuff, but with clothes I'm usually pretty much restrained and rarely buy brands.
But these jeans ... man, they've been a discovery. Thanks to my friend Tabby Cat II, who's once made me try them on.  They have the most comfortable fit I've ever found in a pair of jeans: the shop assistant explained us that this is because they are actually designed on real persons' bodies, and not on dummies.
G-Star is a Dutch brand and their shop in Amsterdam is one of the most equipped they have, while in Italy we unfortunately don't have one yet; so for me this represented a good point.

10) And Amsterdam & me have something more in common: besides cats we love Great Britain too :)
Maybe it's just that I have a good flair about it (or that I look for it actively? *lol*), but I've been able to spot some Brit hints in Amsterdam as well.
Nothing special actually, but there's a considerable presence of British pubs and then I've noticed some English brand shops (such as Waterstone, Paperchase and Marks & Spencer - that sell my 3 favourite things ever: books, stationery and sandwiches) that I had never seen outside UK
Pubblicato da Serena Chiarle a 22:41