Torino is defined to be a magical city.
There are tons of books and even tours about this aspect, and there are plenty of legends and credences that justify such definition.
But is it magical just because it is charming and bewitching, with an arcane and suggestive halo which can become very attractive for some, or because it actually hides secrets from occult science, both from white and black magic?
I'm not going to answer to this question, simply because I haven't found an answer myself yet: I am a totally rational and concrete person, but still I admit I get charmed by such topics. Like, I don't believe it, but it would be bewtiching to - somehow as when, during your childhood, you have already found out Santa Claus doesn't exsist, but a tiny part of you still hopes it's not your parents that bring the presents under the tree.
So - here is an overview of some of the legends, the myths and the facts that have contributed to create Turin's magical halo. Then feel free to make your choice - whether to believe them or not.
After all it wouldn't be wrong to state that magic is just in the eye of the beholder: if you believe it, it does exsist; if you'll look for it, you will find it; prodiges do not show up to everyone, but only to those who will follow an effort, a path to look for them. And this surely applies to Turin's magic - both the esotheric one, and the one related to the sheer charme of its discrete and regal beauty...

[*] Da Vinci Code should have been set here...
Gran Madre church is a quite enigmatic one.
Its name, for instance: it doesn't really sound like a Christian appellation of the Virgin Mary, but it has more of a pagan taste.
And actually, even if it was built in 1831 as an homage to the king Vittorio Emanuele I for his victory against Napoleon, legend says it actually rises on the spot where there used to be a pagan temple many centuries before dedicated to the goddess Isis.
But the most legendary aspect about it is this statue, which represents Faith. 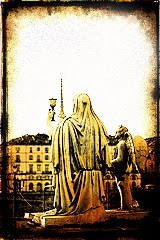 The statue holds a goblet, which might be the Holy Grail, and with the other hand she points somewhere.
They say she is indicating the place where the Grail is hidden - and, well, after all the gesture is so vague that it could actually be true.
But of course you couldn't really expect Google Maps indications to find the Grail, otherwise Dan Brown would have written a very boring book (even if now I'm wondering if he's actually got richer than Google's founder or not... - but ok, that's off topic).
Anyway, even if you will never been the elect one who will find it, maybe you can anyway imagine that this apparently emotionless lady is actually watching over and protecting Turin - and I personally find it a very peaceful feeling.
And after all that is what Faith is all about.

[*] May the Force be with you...
Legend... or better, a sort of New Age theory states that Turin rises upon a couple of powerful energy flows.
Of course they are invisible (well, otherwise it wouldn't be just a theory but a matter of fact), but they should be running underneath the city's soil like 2 rivers, as a sort of a parallelism with the two "real" rivers that the city has (I mean, the ones made of water - and mud, sometimes).
Having all this energy flowing by unfortunately doesn't mean we don't have to pay electricity bills, but it should provide an explanation about the forementioned magical powers and the kind of role the city has always been having through history. 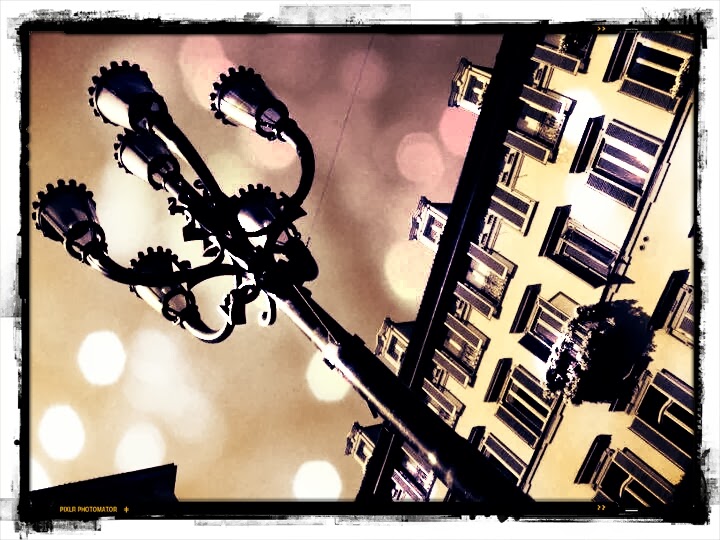 This theory is also stated in Tullio Avoledo and Davide Di Leo's novel "Un buon posto per morire" ["A good place for dying", Einaudi, 2011], a kind of esotherical thriller mostly set in Turin that provides good entertainment for a summer reading. In this book they say that such hub of energy has the peculiarity of helping the birth of things, but then they have to move somewhere else in order to grow and develope.
And this has actually happened with quite many things that were born here and that now are set elsewhere: Italy as a nation, just to name one, as all the fight for unifying the country was started by the Savoy, but then the capital has been moved to Rome. Then the Italian cinema, the Italian TV, the first Italian telephone company... and lots more.
Maybe mr Marchionne, the CEO of FIAT, is simply being guided by the power of this flow??
Some says that the peculiar and unique shape of the Mole Antonelliana is actually dued to the fact the "real" #1 purpose of the building is to be a huge convey point of those energetic flows: like a big talisman it would gather the force of it and then spread it all over the city, like a sort of aerial. 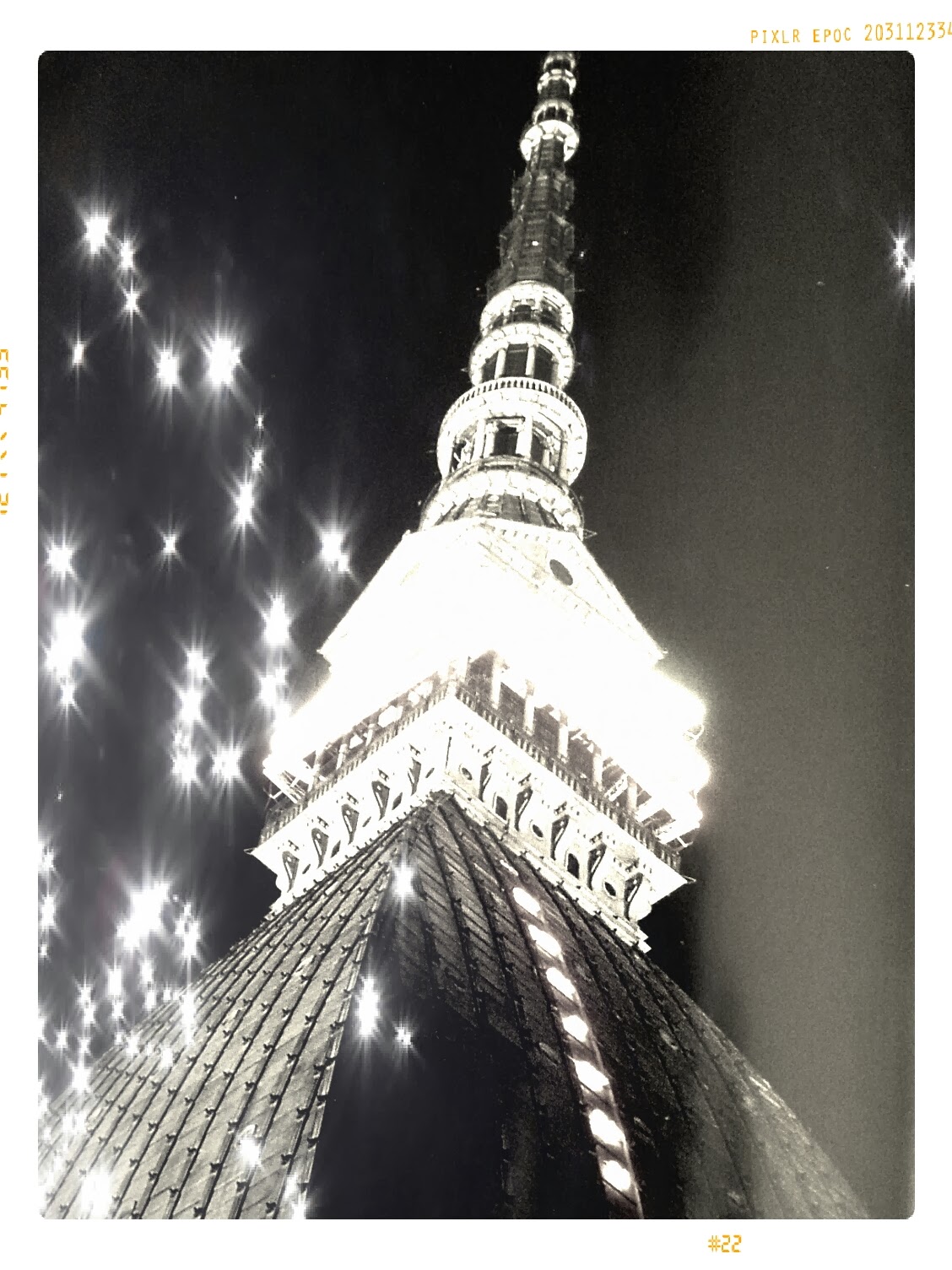 Oh, and then - I have already told you about the Dioskouri statues in Piazza Castello: well, the pin that lies between them and that should bring you good luck when holded for a while, according to this theory derives this positive effects from the fact that it actually works like another convey point of energy. 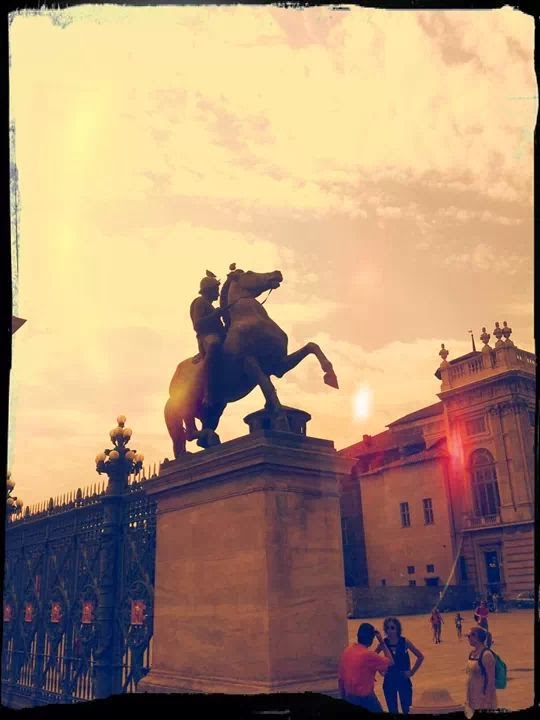 So, not really a lucky pin but a sort of energetic fountain. Which version do you prefer?

[*] Can you please transform all my iron(y) in gold??
Savoy kings were quite enthralled with alchemy, it seems.
They used to have a crowd of alchemists at their court, and even Paracelsius himself, who is probably the most famous and controversial among them, has been staying here for a while.
The idea of transforming vile metal into gold was surely appealing to them, as ruling a kingdom always ends up being expensive; but maybe they were also hoping to get to master some even more powerful and precious secrets. Immortality? Power? Not ending up having a descendant who joins ballroom reality shows?? 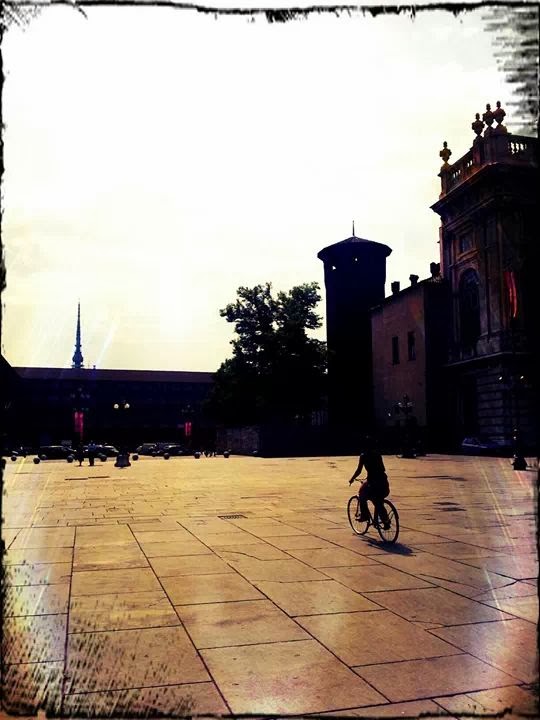 Legend says that underneath the city there is still an Alchemic Cave - the alchemists' laboratory, which of course should be super secret.
Besides this (supposed) one in Turin, there should be only two other ones in Europe, in Lyon and Prague.
There are only three persons who know the exact site of it (no, once again it is not on Foursquare) - and therefore who can access it.
But anyway, even if you would end up bumping into it, like, I don't know, if you get drunk and fall into a manhole, or if you decide to escape from your lover's husband diggind yourself into the sewer... or any other reasons that would see you wandering in the subterrean labyrinth of Turin - well, you'd better avoid trying to get inside, because they say it should be guarded by a pretty angry elemental. 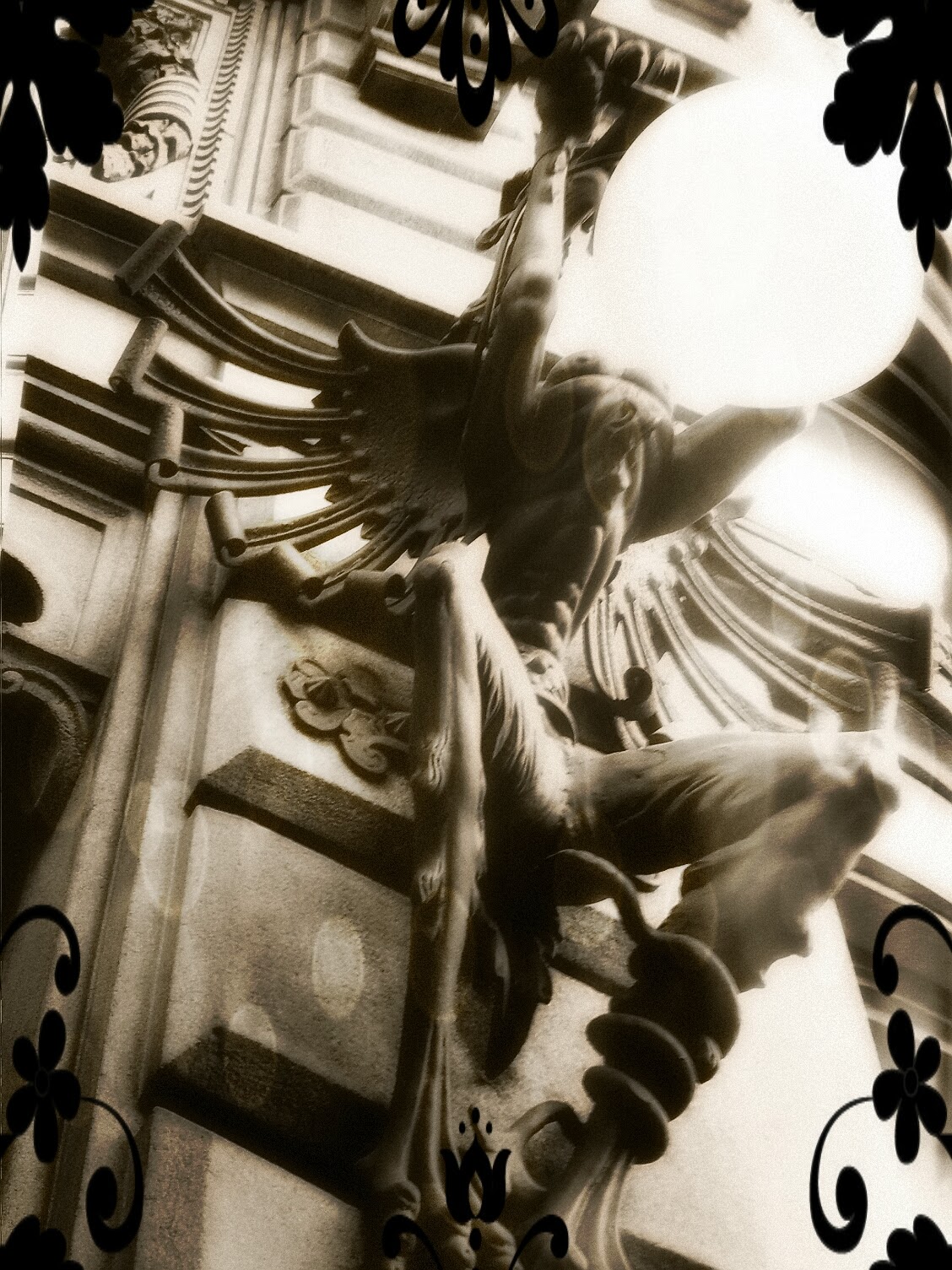 An elemental is a mythical being created by an alchemist out of one of the natural elements (air, water, earth or fire). It doesn't have a will of its own but just obeys to what the wizard has set for it - like a sort of robot, but created with magic.
Which therefore makes wizards similar to engineers and viceversa - but please do not tell them. To engineers, I mean. But ok, also to wizards. Well, it depends on how many people of the two categories you know more - altough if you are in Turin there might be plenty of both.
Ok, but I am digressing once again.
Just for the record, the Golem, the legendary monster that legends made raise hell in Prague, was an elemental too - so now you know it's really better not to mess up with them.

[*] Water, please
Anyway, the Golem was an elemental made of earth, while the one that guards Turin (nobody knows its name, by the way - such a pity) should be made of water.
And it's no wonder, since water seems to have an important and recurring role in Turin's ensemble of mythology and legends.
For example the Angelica Fountain in Piazza Solferino seems to be composed of a lot of Masonry's symbols: for example, the two manly figures represent Boaz and Jaquin, the two giants holding the Columns of Hercules, after which, in the ancient believes, infinite (a.k.a. knowledge) would have started. And the knowledge is represented by the water itself, as it feeds our soul chasing away the dryness of ignorance, quencing our thirst to know. 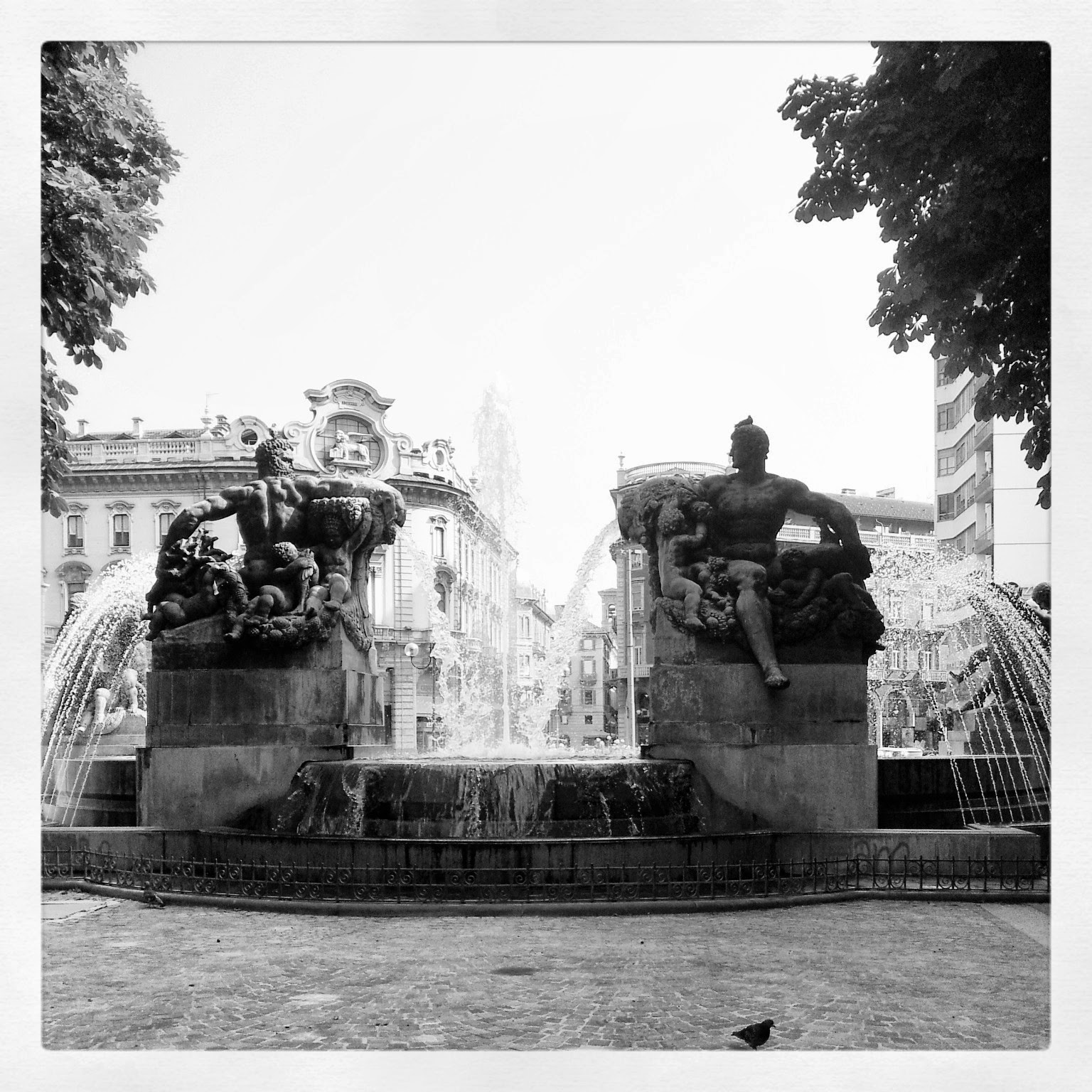 After all it's very similar to the Christian metaphor of Baptism, where water represents the cross of a threshold that sets the beginning of the path of initiation of the individual towards God.
And Turin's patron is by the way St. John the Baptist.
With all this importance given to the water, Turin is not even by the sea.
But it does have a river.


Well, two - Po and Dora Riparia. But it was in the Po where the young Sun god Phetontes splashed after having lost control of its charriot with which he was not too expert yet.
Luckily he was also a good swimmer, or anyway as a god he was immortal, and, having survived to the dive, he decided to found Turin.

So you can see it's not true that in Turin the weather is rarely sunny!

[*] The Dark Side of Turin
This monument might not tell you that much on a first look. 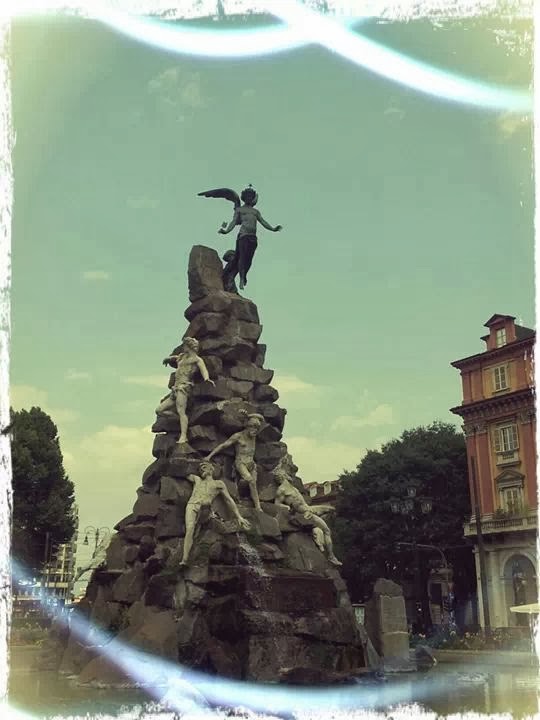 It's been erected to commemorate the 48 workmen who died while escavating the Frejus tunnel, which connects France to Italy, in the second half of 19th century; and the winged creature on the top should be an iconic representation of Science - as if the victims of the works were some sort of human sacrifices to progress.
Which is already kinda creepy, to be honest.
But -
The winged guy doesn't actually carry any iconic symbols of science: he just has a star on his brow - which doesn't have much to do with science.
So, according to some, this star actually reveals his real identity: he might be Lucifer, the fallen angel, the most beautiful and the most eager of knowledge, who dared to rebel against the will of God because he wanted more.
And he apparently feels at ease here, because Turin's magic also has a dark side: it's not only white, but also black... and Piazza Statuto, with this ambiguous monument, apparently is the focal point of the darkness. There is even a Mc Donald's in front of it, so this is the evidence it actually is the root of all Evil ;)
But seriously now - back in the 90's it was stated that Turin was the Italian city with the highest number of satanists (don't ask me how they've collected this number - I'm not sure satanists declare it on their ID, but well...); and still it's also the one with the highest number of saints.
I guess it's always dued to that, to those two flows of energy that Castor and Pollux guard: they collide and they provoke the neverending fight between Good and Evil, between Positive and Negative waves. 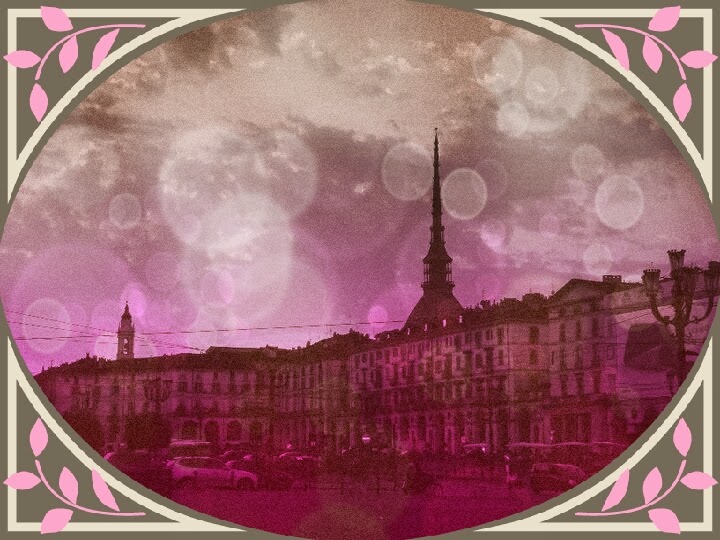 Now this kinda sounds apocalyptic, but please do not be scared about visiting Turin.
Hopefully Apocalypse won't take place any time soon, and, as for the winged guy, legend also says that Turin is protected against any evil because it owns three of the most powerful relics of Christianity, which work as a sort of talisman (if you don't find disturbing to use such word for something connected with religion): the Shroud, a piece of Jesus's Cross (preserved in Maria Ausiliatrice church) and...
Well, we don't know about the third.
Maybe could it be the Grail for good??