Down from the Rabbit's hole in Valentino Park

I wasn't planning to visit this place yesterday.
And actually I wasn't even planning to write a post about it.
But sometimes unplanned things turn out to be beautiful surprises: just like Alice, you get curious and follow the Rabbit down in the hole, finding out a new realm of wonderland... even when the "wonderland" is actually a place you know already pretty well.
But sometimes there are days, special days, when you simply get able to see things with new eyes, under a new light, with their beauty suddenly exploding, like a firework that turns the everyday sky into a feast.

Yesterday my aim was to try Miss Cake (via Giuseppe Baretti 31), a new bakery/café that I casually bumped into on Tripadvisor a few days ago. I'm all for cosy places with American-style sweets, and, since in Turin they seems to be a bit rare, because apparently all the cafés are more inclined to a French taste, I ran there as soon as I could. 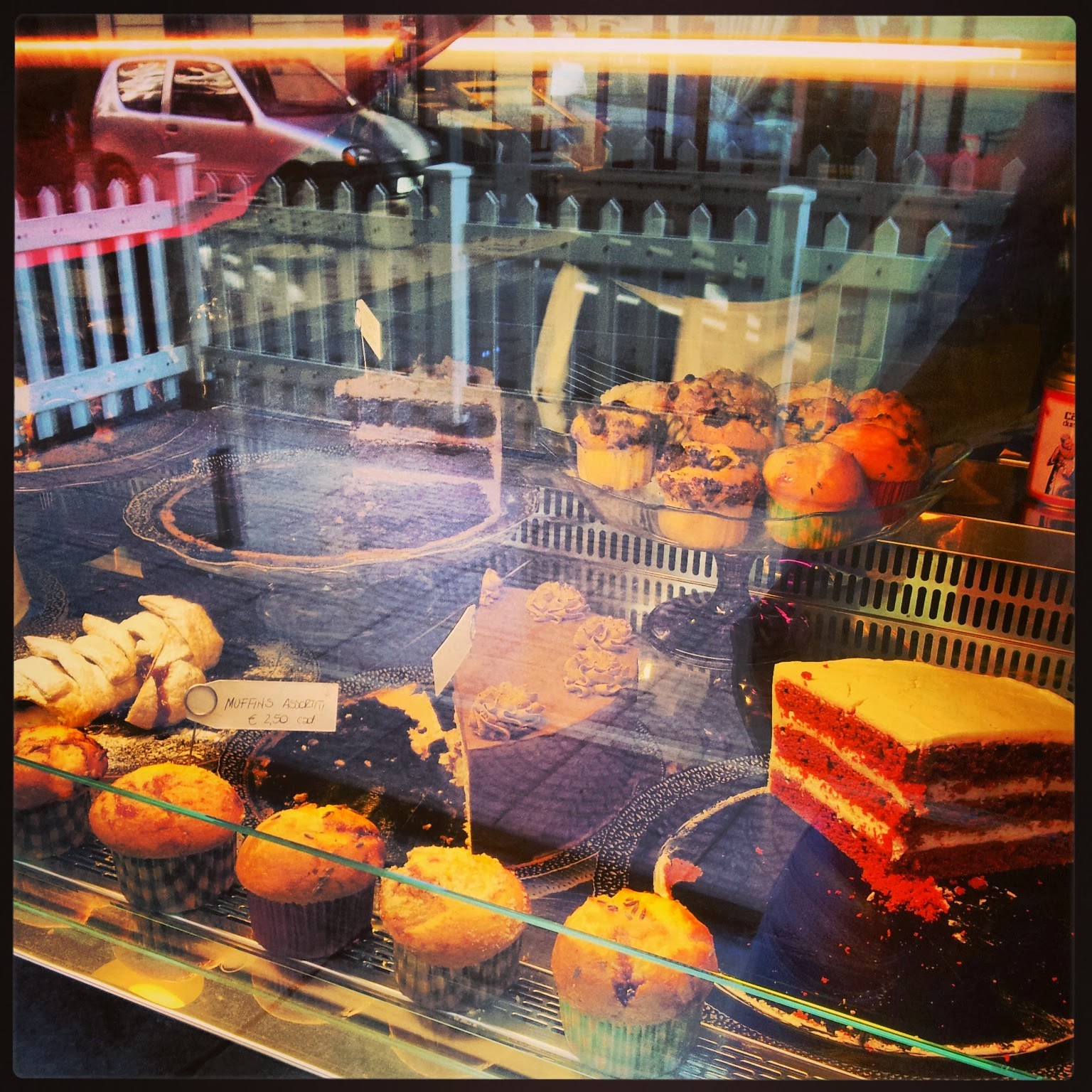 Well, the place is nice, but honestly it didn't make me go too much in awe.
Their window is appealing, the staff is really friendly and kind, and the dominating purple all over is pretty; but I think it could have been cosier, and the red velvet cake I had was a bit dry and way too cheesy (literally - the cheese cream was really too abundant and strong in taste). 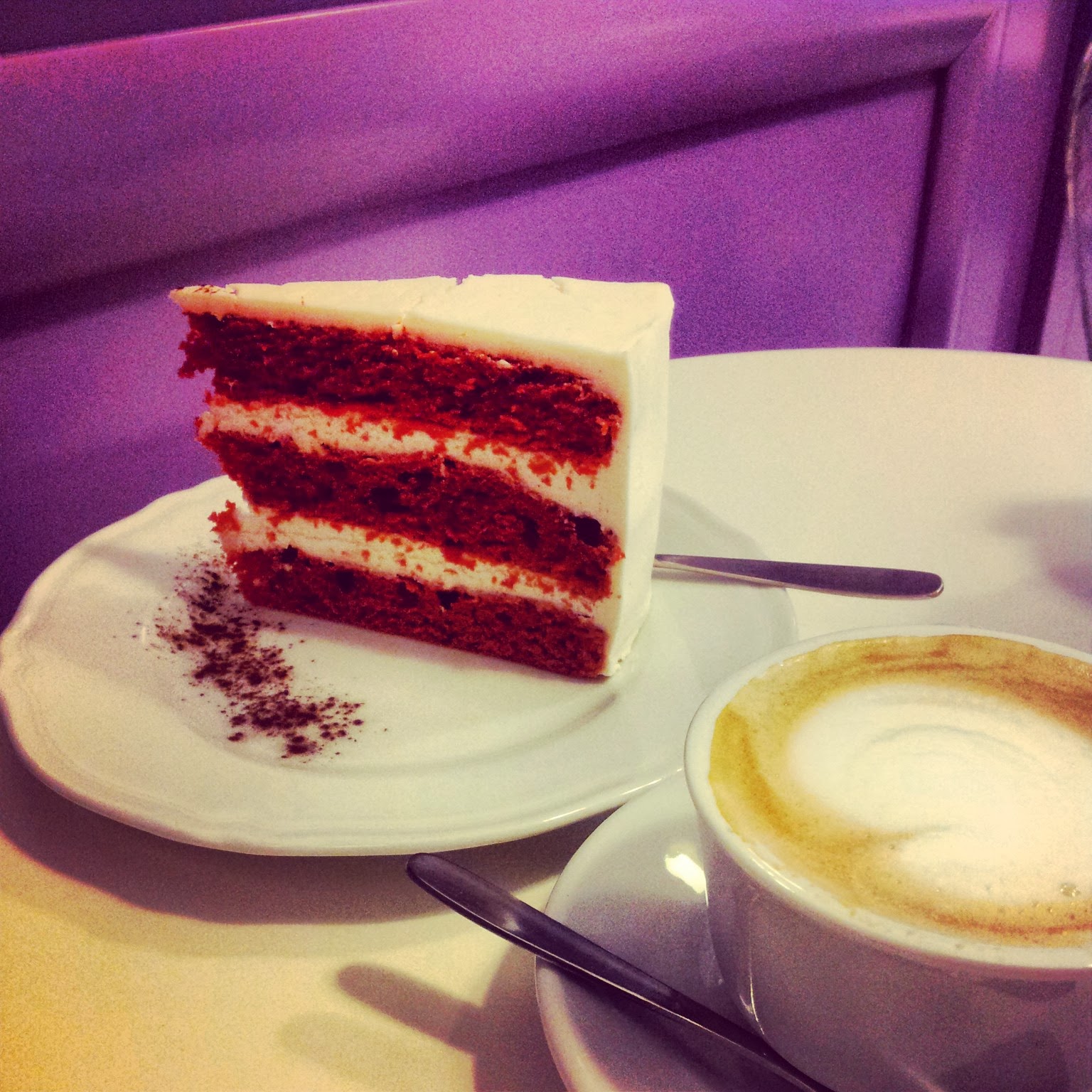 But then here appeared my White Rabbit to follow.
Stepping out from the café I saw the Valentino Castle peeping from the end of the street, so, since it was a glorious sunny day, the sky was incredibly blue and you could already sense the fizzy presence of Spring in the air, I thought it could have been nice to have a stroll in the park.

And so I fell into the Rabbit's hole, straight to Wonderland... 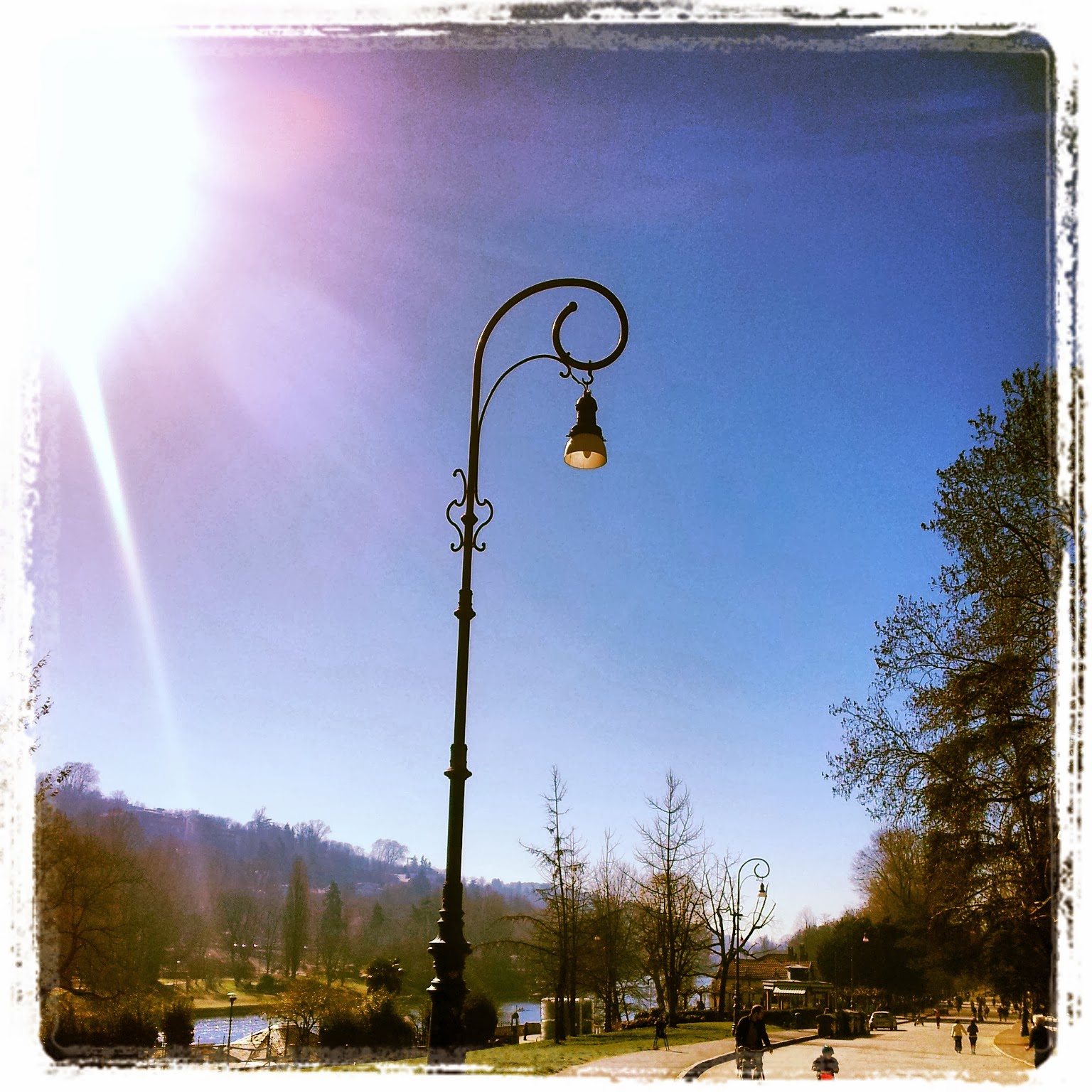 Of course I had already been quite some times to the park, but I've never found it so beautiful like this time.
There was something magical in the air, perhaps: even the Po river, which is usually muddy and dirty,  was so blue that it almost seemed one of those crystal clear water mirrors you can find in the mountains. Now I understand why the Sun god Pheton had splashed into it, like the legend claims: I bet it was this blue when it happened. 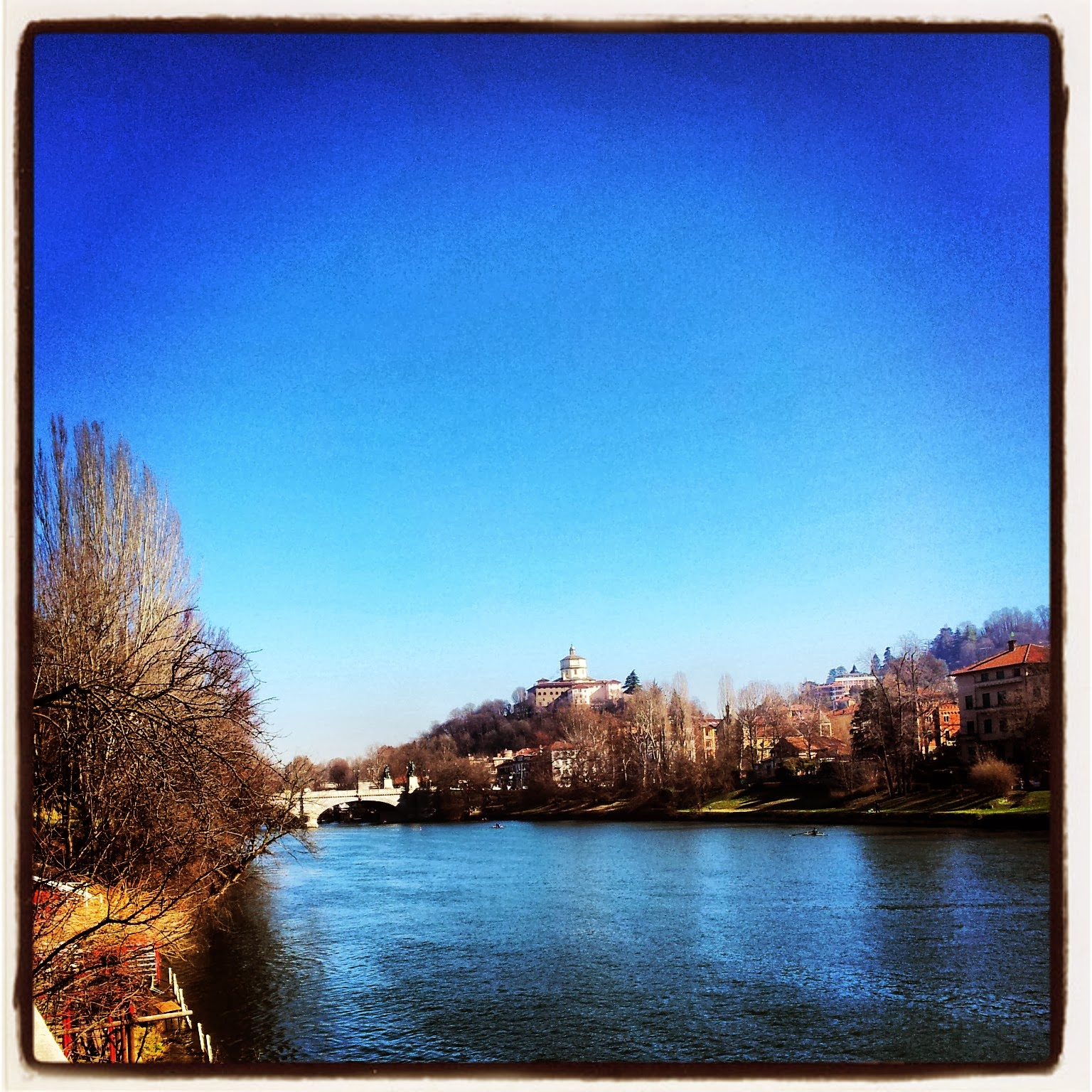 You might wonder where the name Valentino comes from.
Well, at least I do - but there is actually no answer.
Some say it derives from a noblewoman named Valentina, whose husband contributed to the restyling of the park promoted by some of the Savoys back in 16th century; other say it's because there used to be an ancient chapel dedicated to St. Valentine... 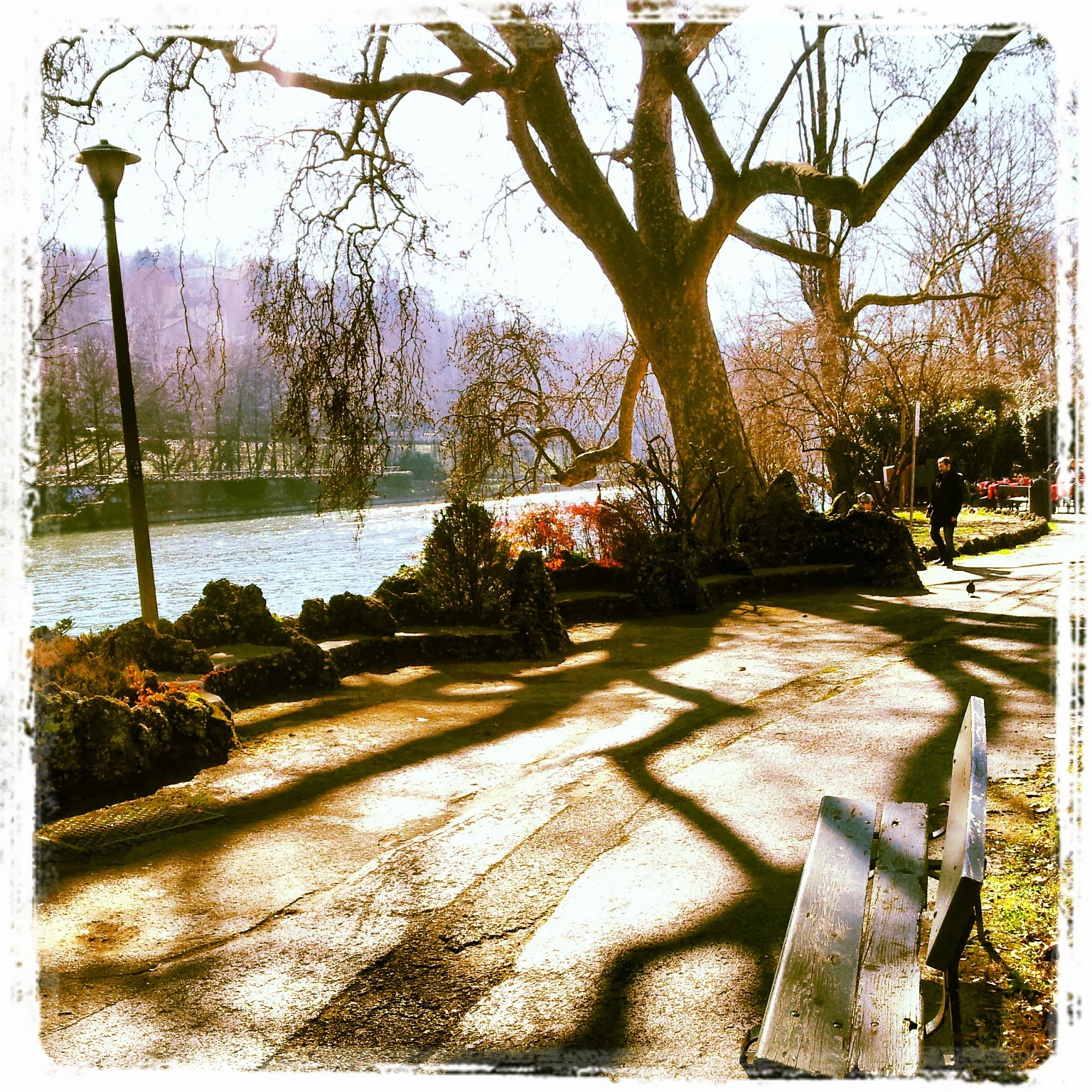 All in all the name makes it romantic, and I remember a corny song set there that my grandma used to sing when I was a kid, about a couple always having rendez-vous in the park, and then losing each other for some unknown dramatic reason - but of course still longing for each other after many years, in spite of time and distance.
My gran thought this song was just too sad and that the poor couple didn't deserve such a bad luck, so she had invented herself a new final strophe for it where the two where reuniting again and leading to a much awaited and longed marriage.
She was for the happily ever after kind of endings - while I was actually finding more melting the original version of the song with their impossible but unforgettable love.
Well... but now please don't get me started about my sick inclination for this kind of painful feelings, and let's go back talking about the park!

You know I love city parks.
But while most of them actually feel like some sort of green shelter from the chaos of the city, some sort of parallel world where you jump into, forgetting where you are, Valentino Park is actually harmoniously integrated with the rest of the city.
I mean, when you are there you just know you are in Turin: maybe it's because of the Castle - so it kinda seems that Savoy kings are still ruling the city, and that you are just walking through their private garden. 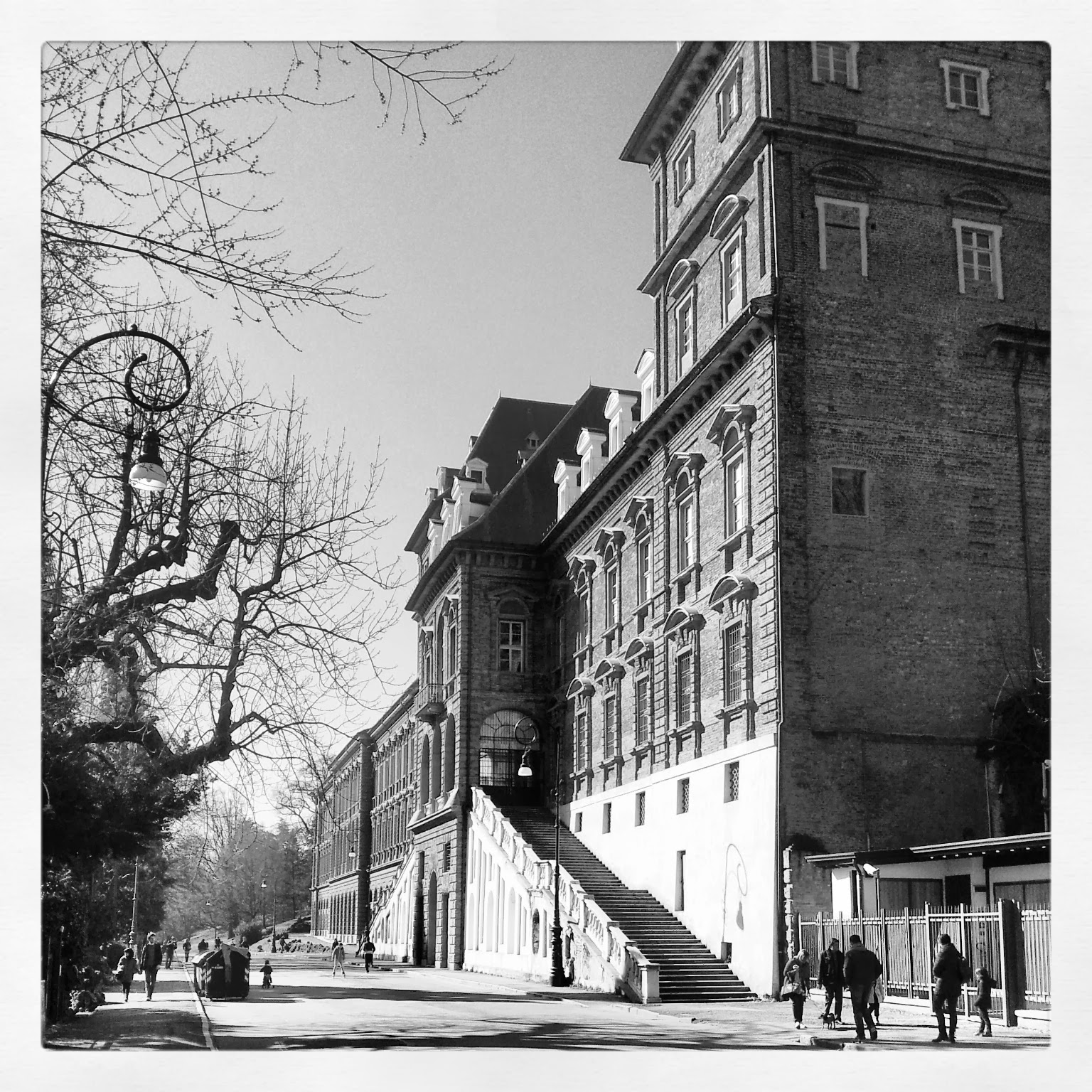 The Castle nowadays hosts the faculty of Architecture, but when it was built in 17th century it was 3x bigger: the regent queen Cristina, a.k.a. Madama Reale, really wanted a pretty place to relax in the green along the river.


She was a strong and controversial figure, but she really had a good taste, and put a deep mark in restyling the looks of the city: since she came from France, she's actually the reason why Turin has some kind of appeal that reminds Paris a bit. 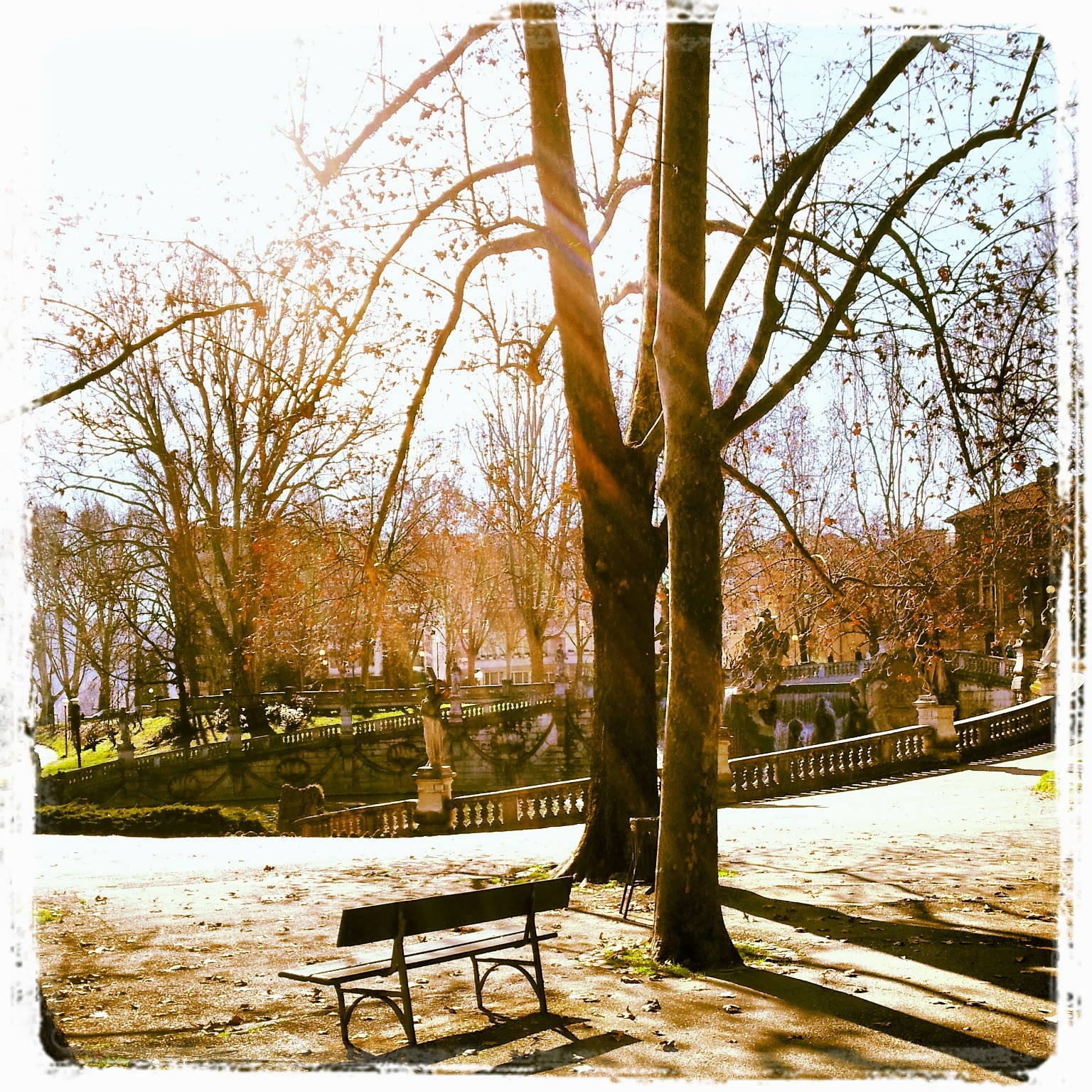 But forget 17th century now, because a few steps away you must get ready for Middle Ages - even if, on the timeline where the visit to the Castle has brought us, we are not going to step backwards, but forward. 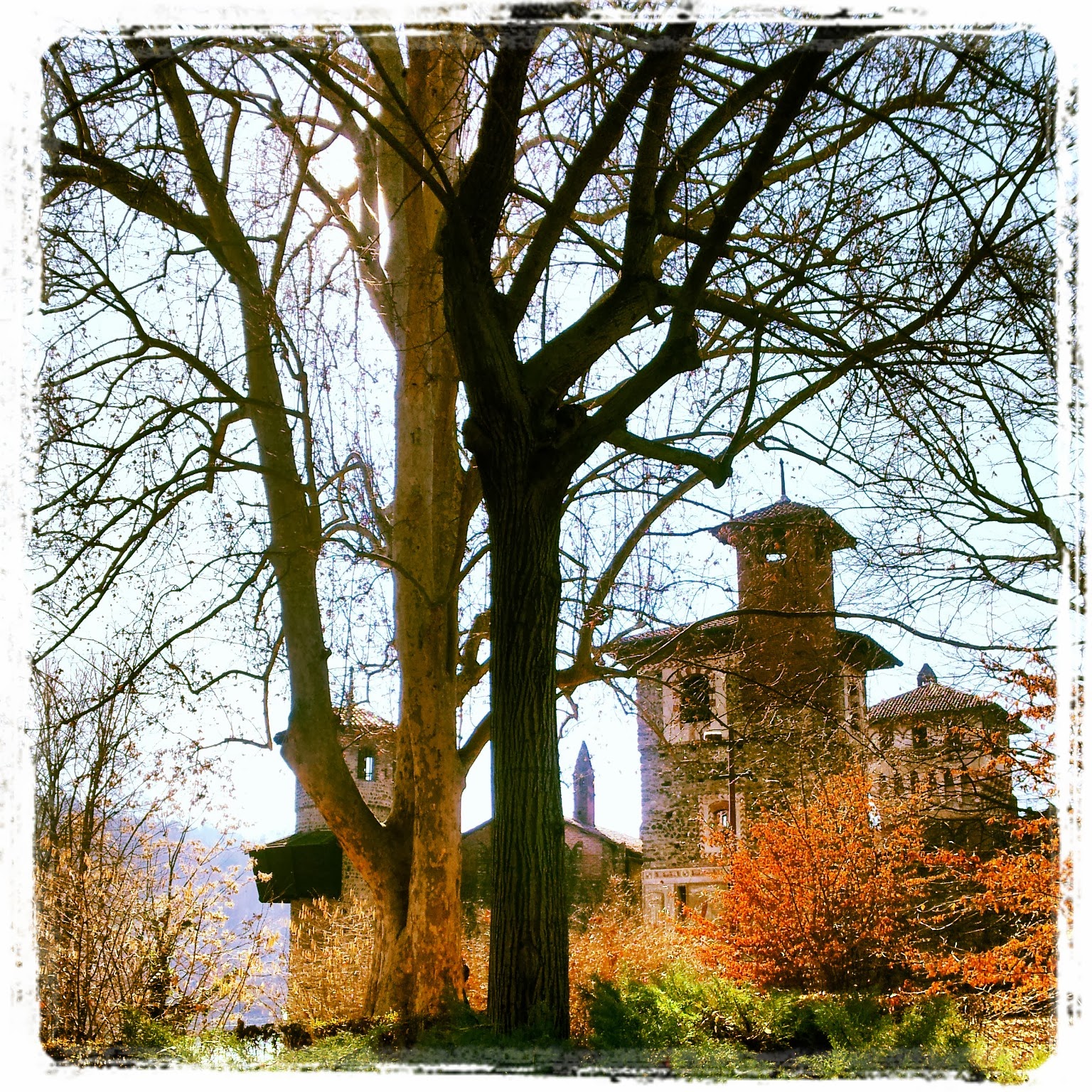 The Borgo Medievale is actually a fake.
It was built between 1882 and 1884 by a bunch of young and creative architects for the Italian edition of the Universal Exhibition that was taking place everywhere in Europe during those years: Paris got the Eiffel Tower from it, and Turin a medioeval borough. 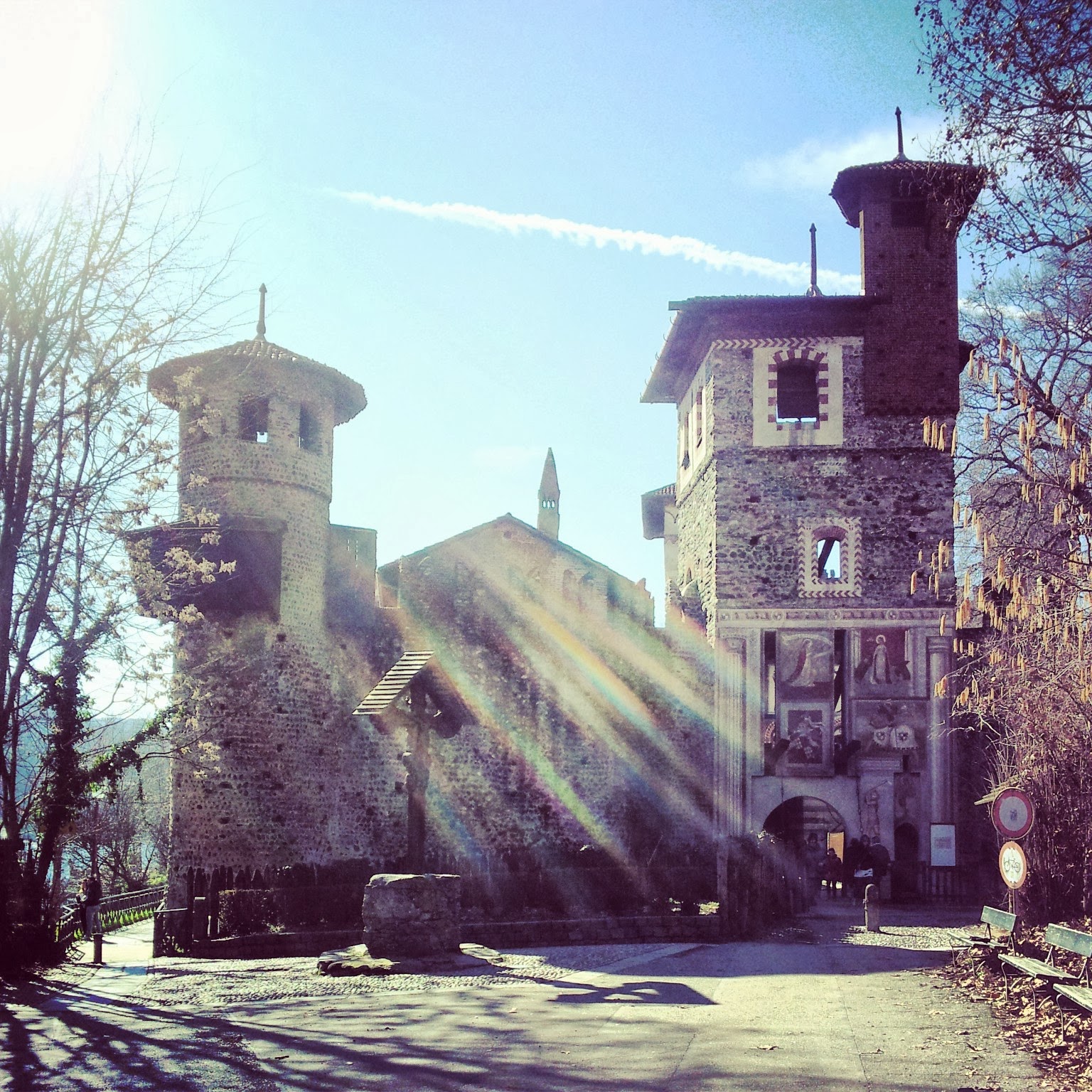 Everyone know it's a fake, but still it's lovely to see - expecially if you like Middle Ages like I do, and like they did during 1800's when they built it. 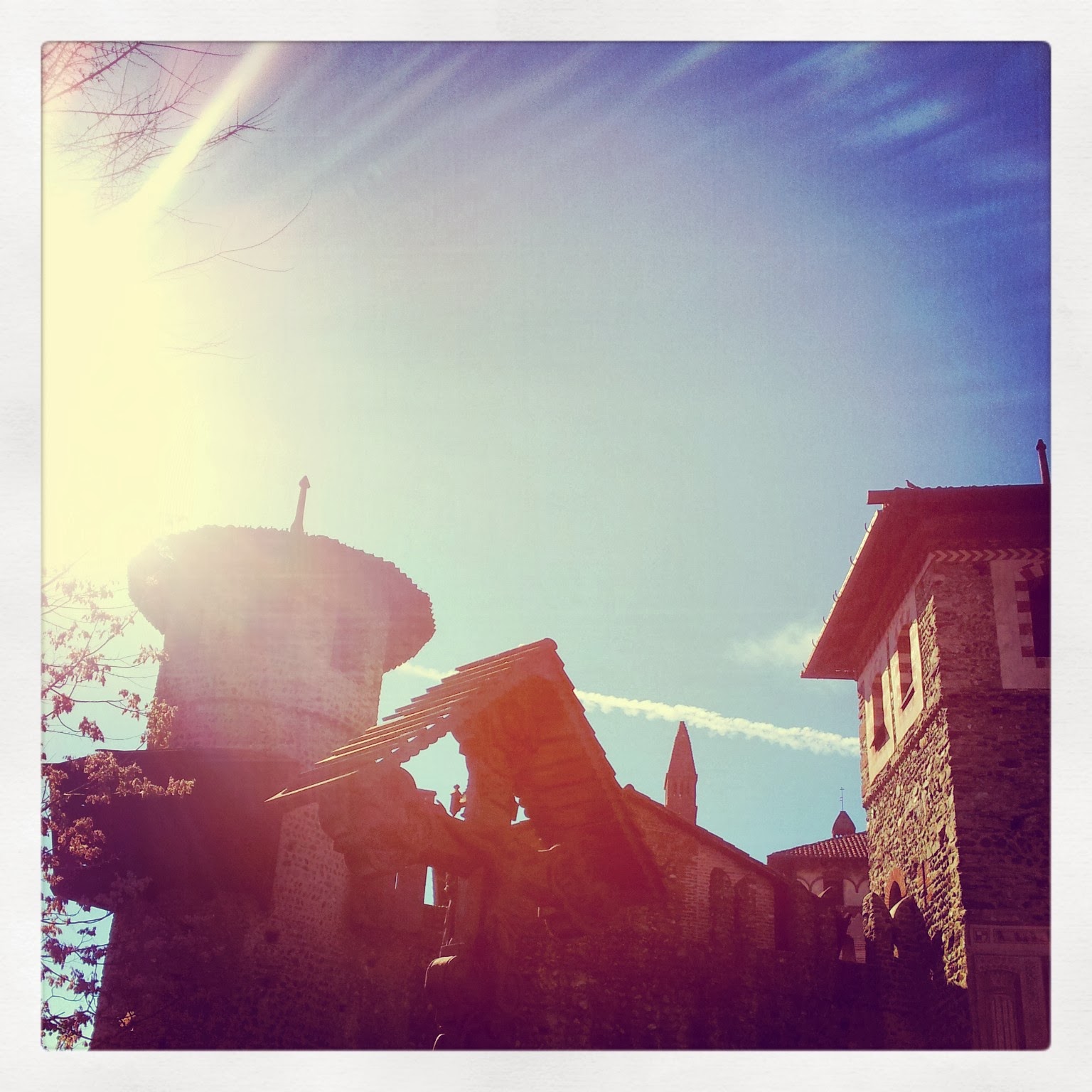 It's a very well done panoramical synthesis of the most important medioeval architectonic masterpieces we have in Piedmont: an old house from Bussoleno, a fountain from Oulx, a Virgin Mary statue from Chieri dome... 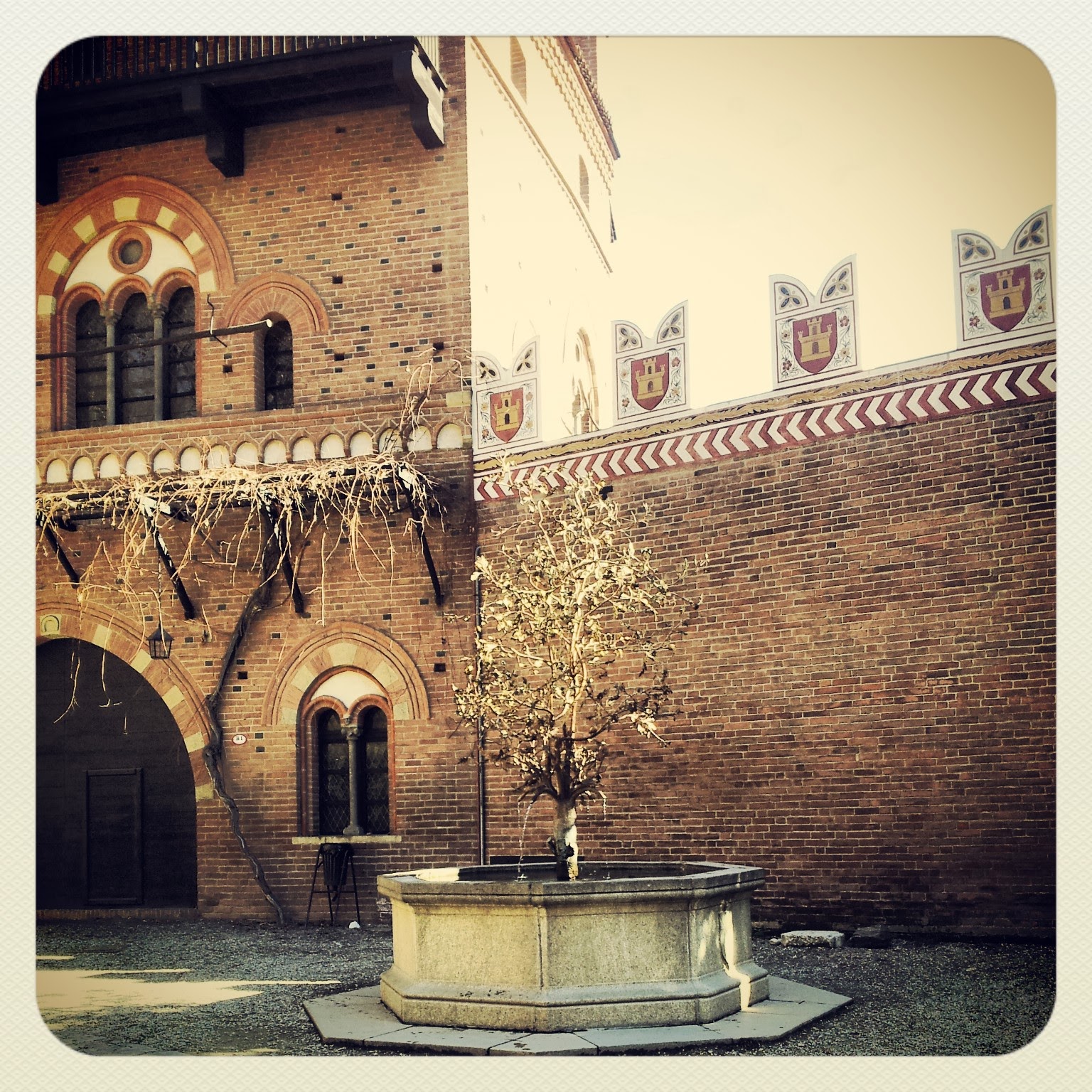 It's an harmonious and faithful reproduction which basically has a didactic purpose, not only for what concerns architecture and building: there are also craftsmen wearing costumes who show the old manifacture techniques used during those times. 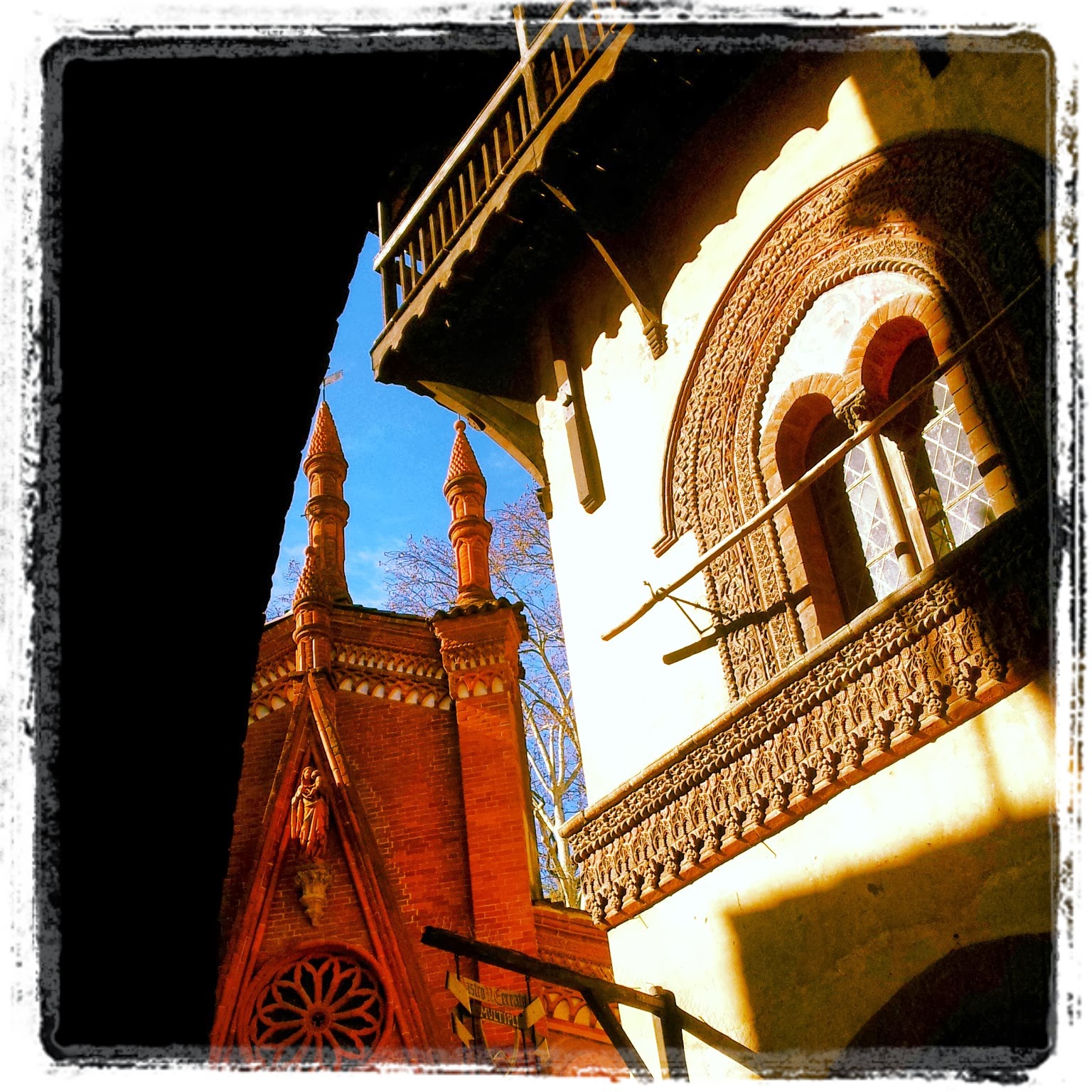 Another gift of the Universal Exhibition is the Twelve Months Fountain. 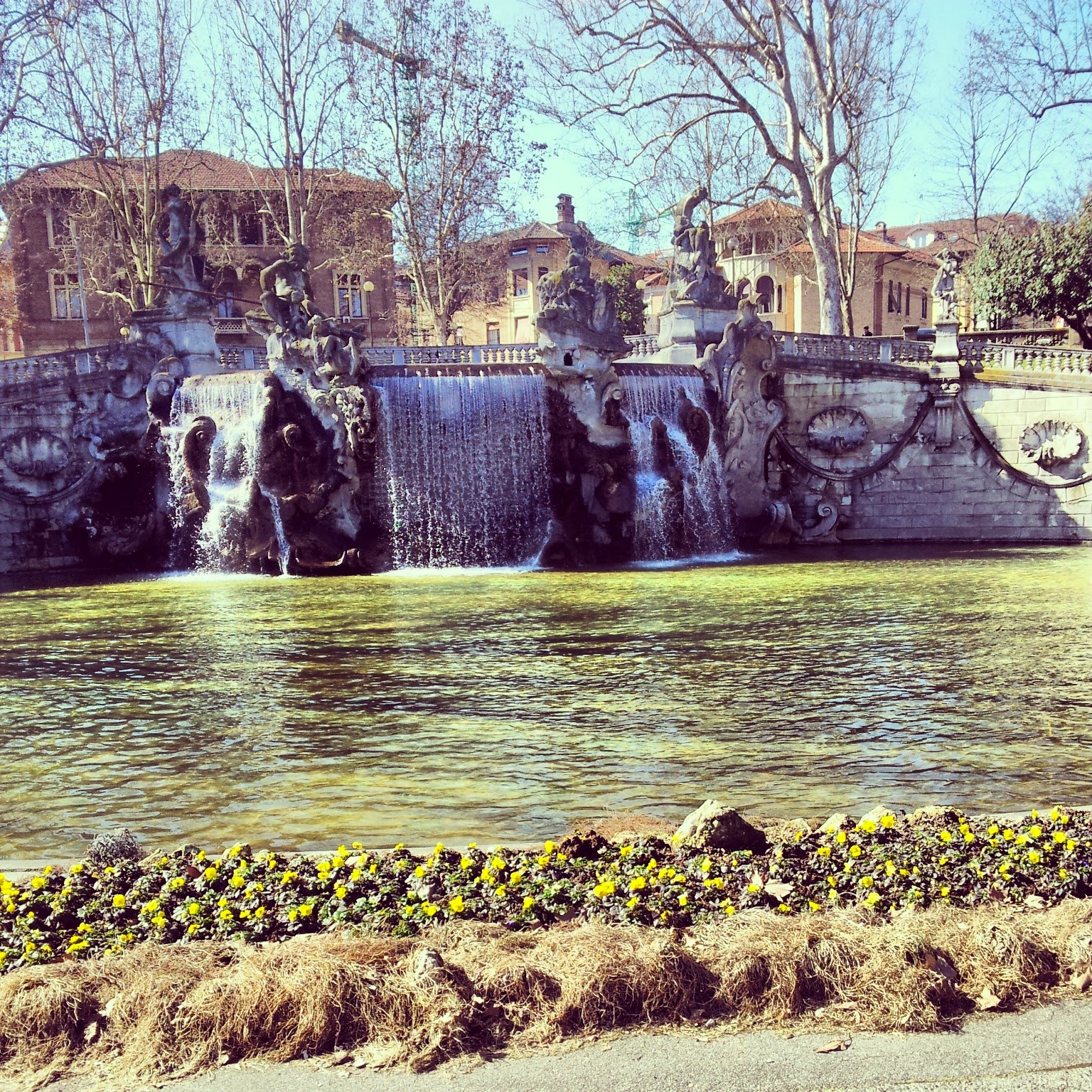 I love it. It's an elegant mix between liberty and rococo styles, and, besides the twelve statues around which obviously symbolize the twelve months, there are also a few more on its terrace top that represent the rivers of Turin. 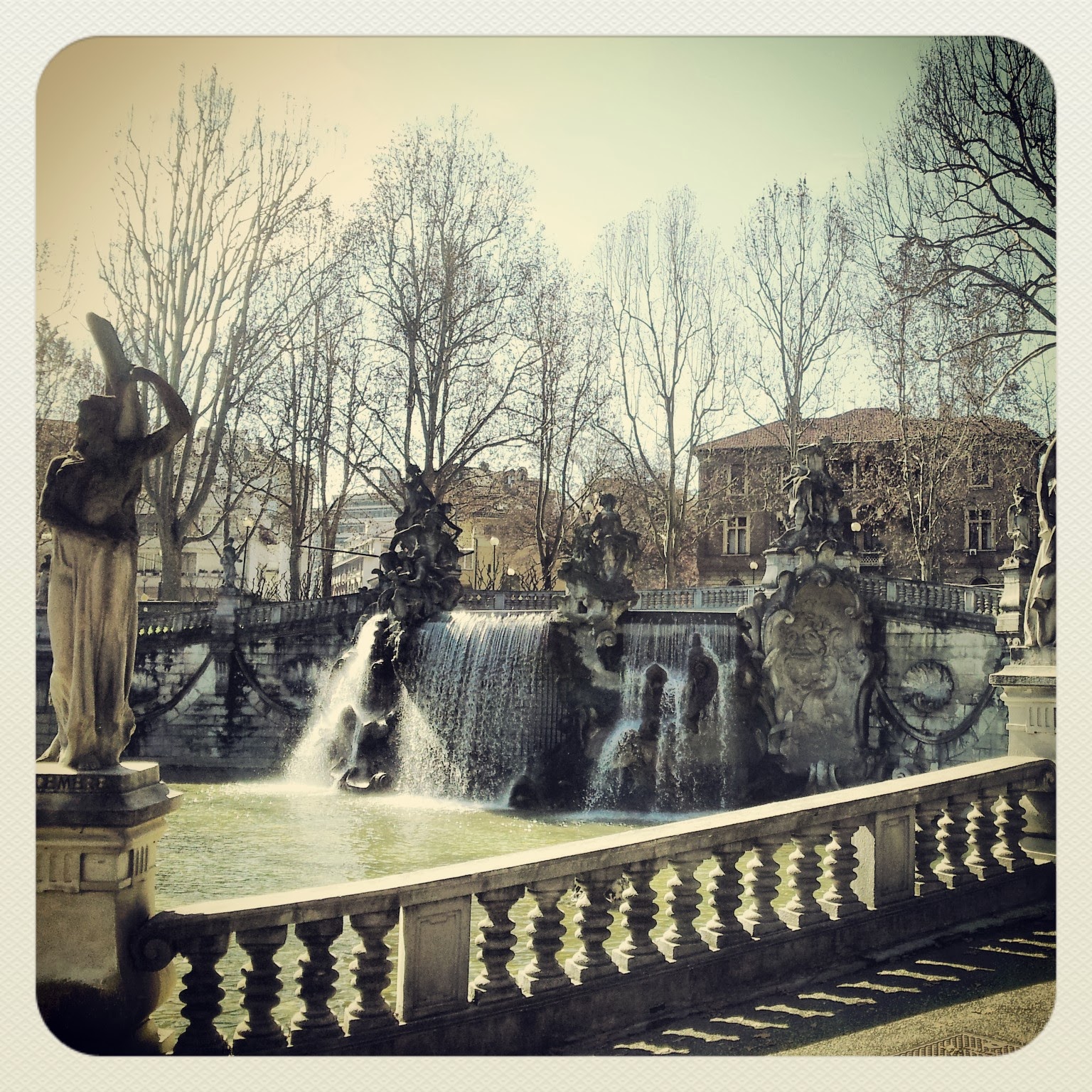 But enough cultural visits for now.
Let's just take a wooden bench in the Rocky Garden and enjoy the sun and the beautiful greeneries around.
And, if you take a closer look, you will also see that our creative and cat-lover gardener has striked here as well... 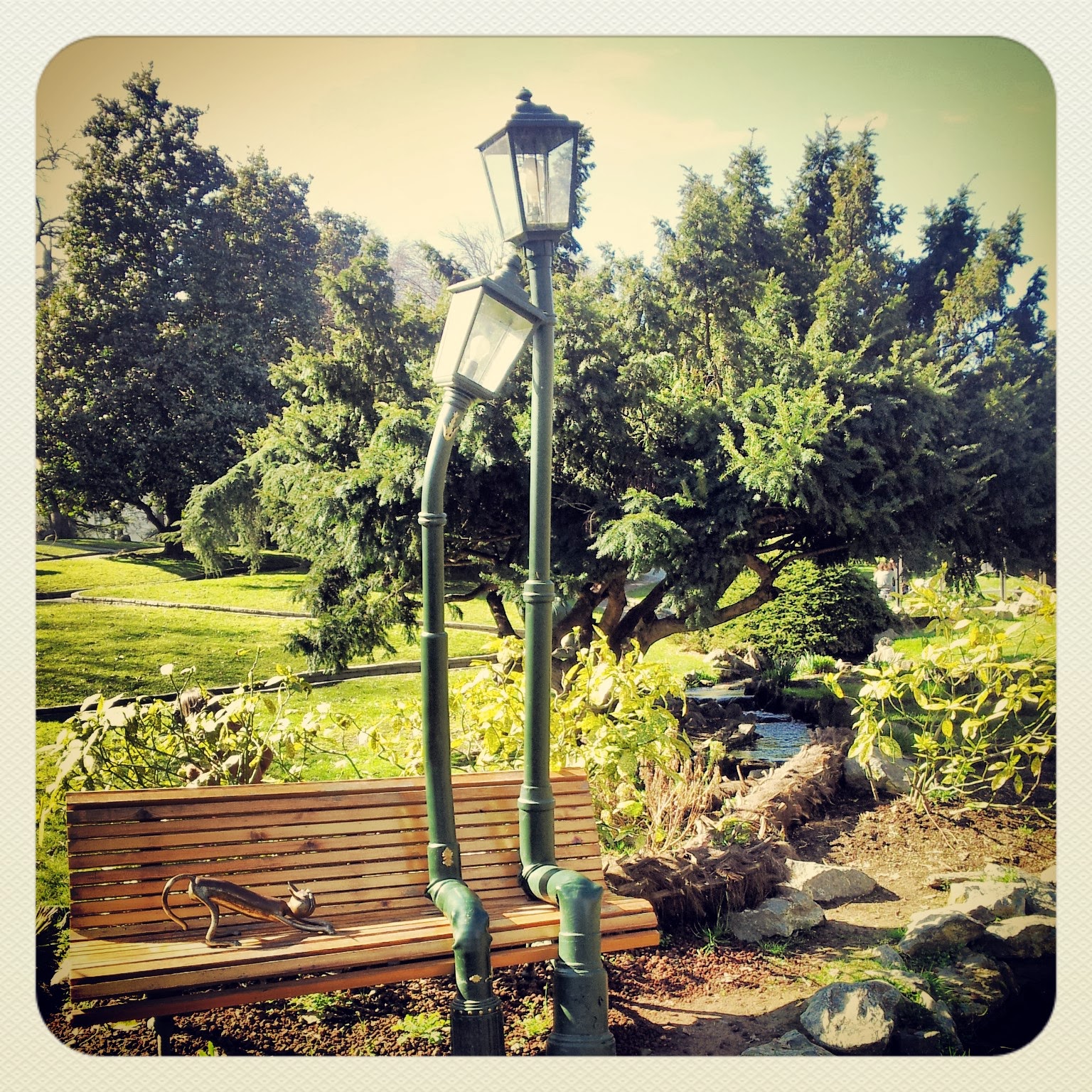 And he does agree that this is a romantic place indeed!
Pubblicato da Serena Chiarle a 22:26