Urquhart - because Scotland knows what ruins stand for!

I've always had a soft spot for ruins.
Well, actually it's more than a soft spot. They attract me like magnets, they bewitch me, they charme me.
I'm a black cat, after all, and I do have a gothic soul: decadence draws me away; it has the melancholic charme of what has been and no longer is, and that is therefore bared from all the mean things and the troubles of everyday, revealing its most intimate essence, that goes beyond any labels of good or evil, of positive or negative. Things' most intimate essence is their truth, and truth is not good nor bad, not pretty nor ugly: truth simply is true, is what we often don't want to see, but that, in the end, is what we are being left with.
And that's the way ruins are.
They've been rich and powerful, they have dominated the world of men or their spirituality - and now they are sitting in a corner, as lonesome as decayed nobleman, lost in contemplating with their misty sight what no longer belong to them.
But sadness of the decadence has also a sort of reflection in it, wounds that cripple their walls have an intense and rich history - and their essence gets being distilled in all of this: power's boasts no longer exist, they get milded by defeat, which makes them more noble, which gives back to us not a controversial symbol of domine anymore, but a trascendental story, made of both lights and shadows, of injustices and heroism, and that, because of this, it gets its own sort of beauty, it becomes worth of respect and it makes you willing to get to know it, and to write about it.

Then, if these ruins are set in a landscape that, anyway, from any corner I might see it, always warms my soul and makes me feel "home", even more than when I'm actually at my own home, well, the joint between them becomes unforgettable. 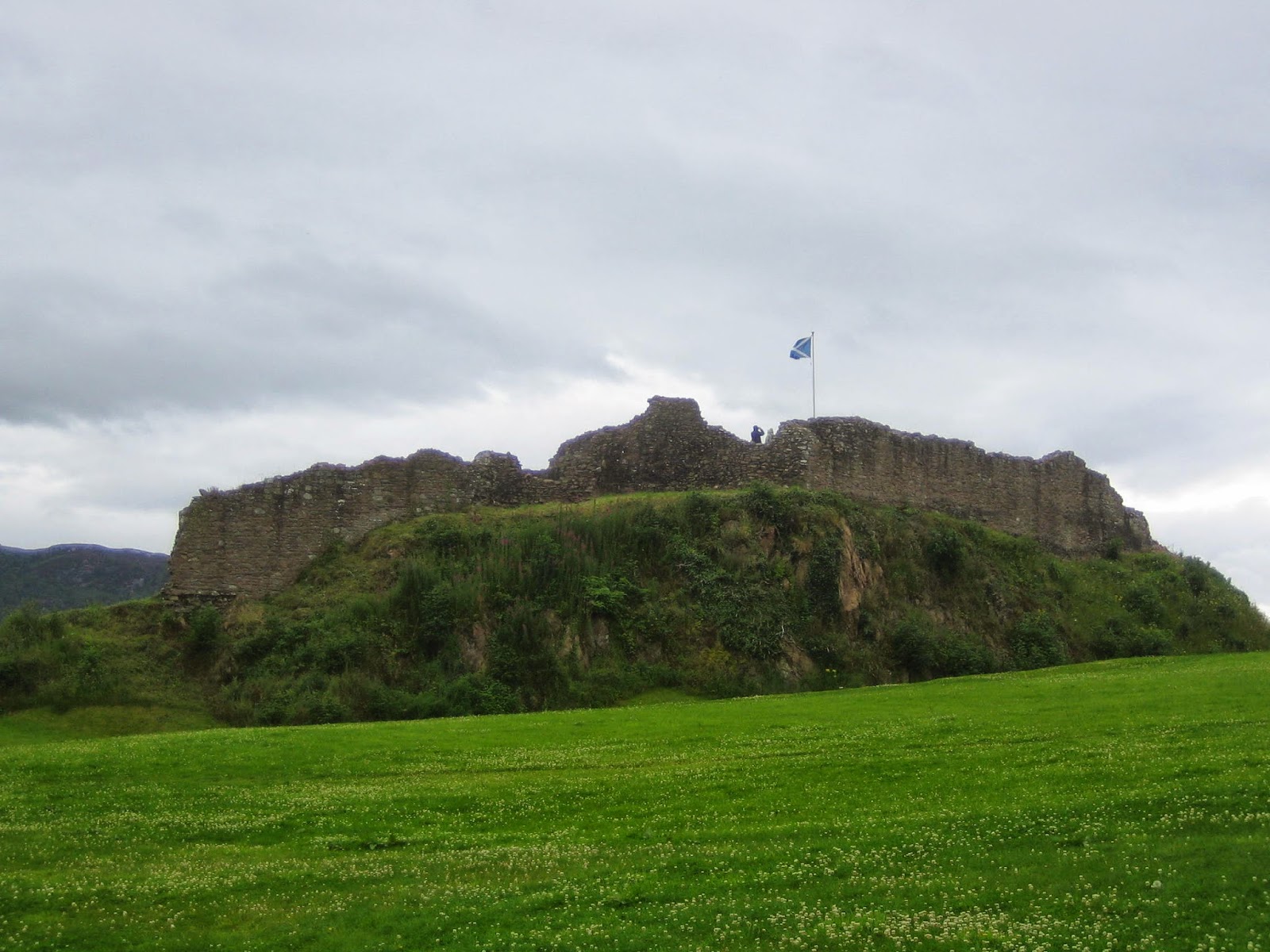 Urquhart Castle has been one of the first places I've got to see when I first stepped in my beloved Scotland.
It's situated at the entrance of the Highlands, next to the lovely village of Fort Augustus, of which I recall white small houses surrounded by tons of coloured flowers and the sound of the bagpipes everywhere (which makes me get moved a bit - I'm a way too sentimental, I know, I don't believe that even real Scots melt in this way; but what can I do, I sometimes feel like I'm a bit in exhile). 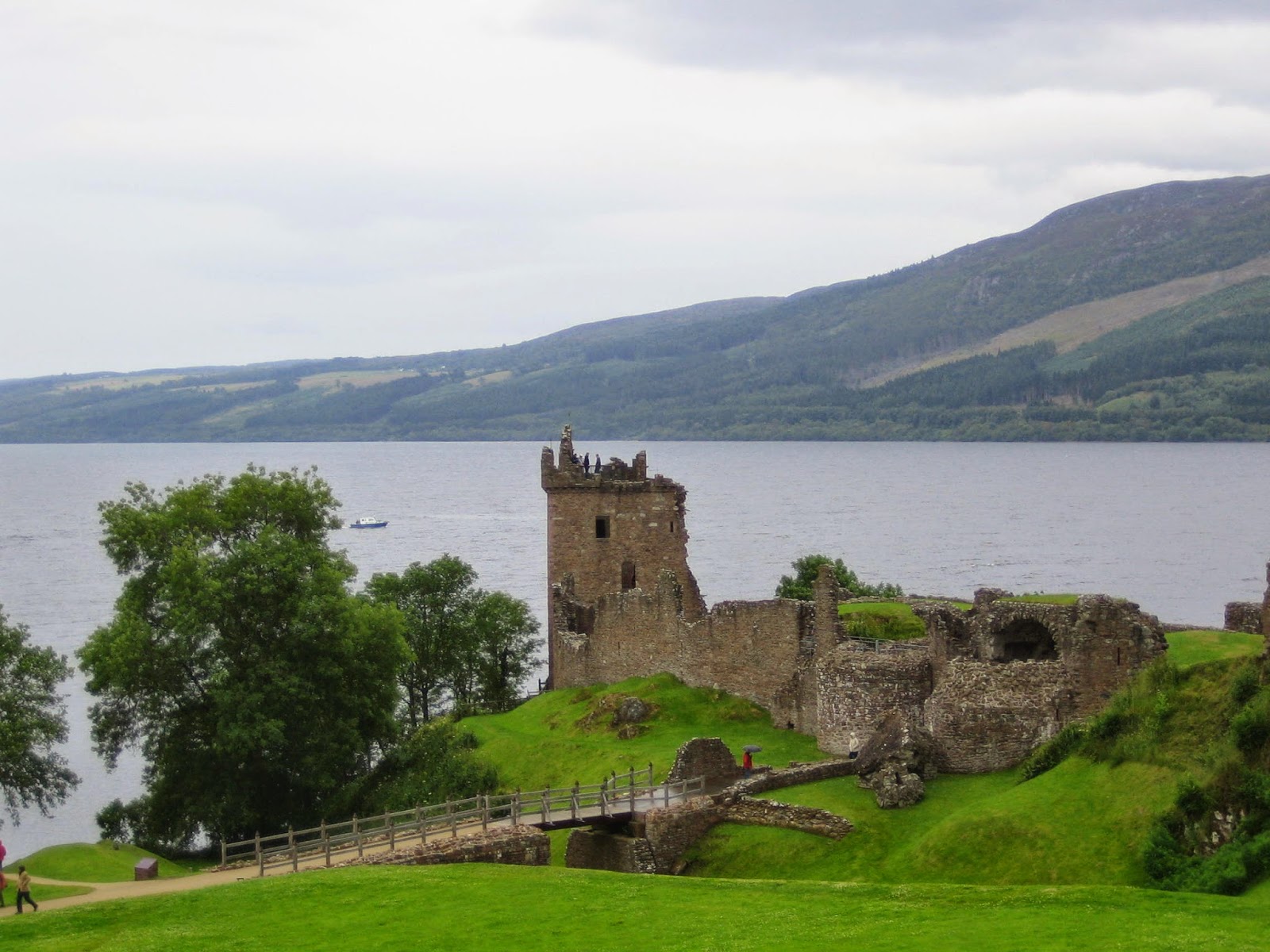 But, moreover, Urquhart Castle stands in front of Scotland's most famous lake, the Loch Ness: it sits on its shore contemplating it in silence, probing with his wounded eyes of stone the mists of its waters, and, perhaps, their mistery. 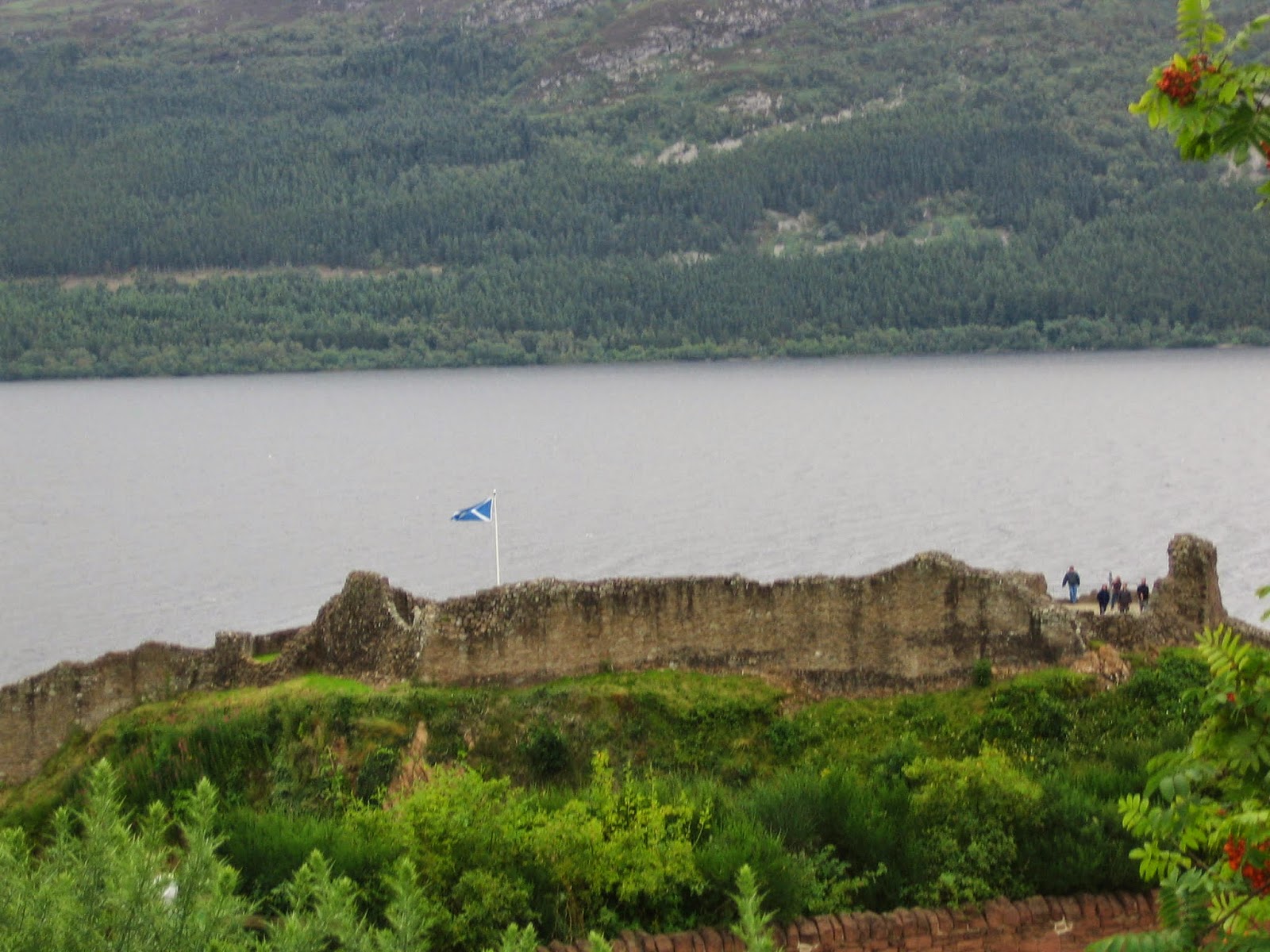 Urquhart is there since a thousand years, and therefore it knows these waters so well, they are its kingdom, he is their sentinel and their company.
Maybe it was existing already even before actually getting this name, even before having walls made of stones and becoming a castle: it looks like the Picts had chosen this very same promontory to erect an household, and that Saint Columba too has passed from here to pay a visit.
For three centuries, from 1200's to 1600's, it has witnessed iron and fire, it has seen the eternal fights between the Englishs and the Scots,both proud and never tamed, and it's been passed from one party to the other just like a very precious toy; until, in 1692, in order not to make it fall in the hands of the Jacobites, they preferred to blow it up.
Better destroyed than in the hands of the enemy: a pulsion on which there would be so much to say, but that seems embedded in the most atavic undergrounds of human soul. 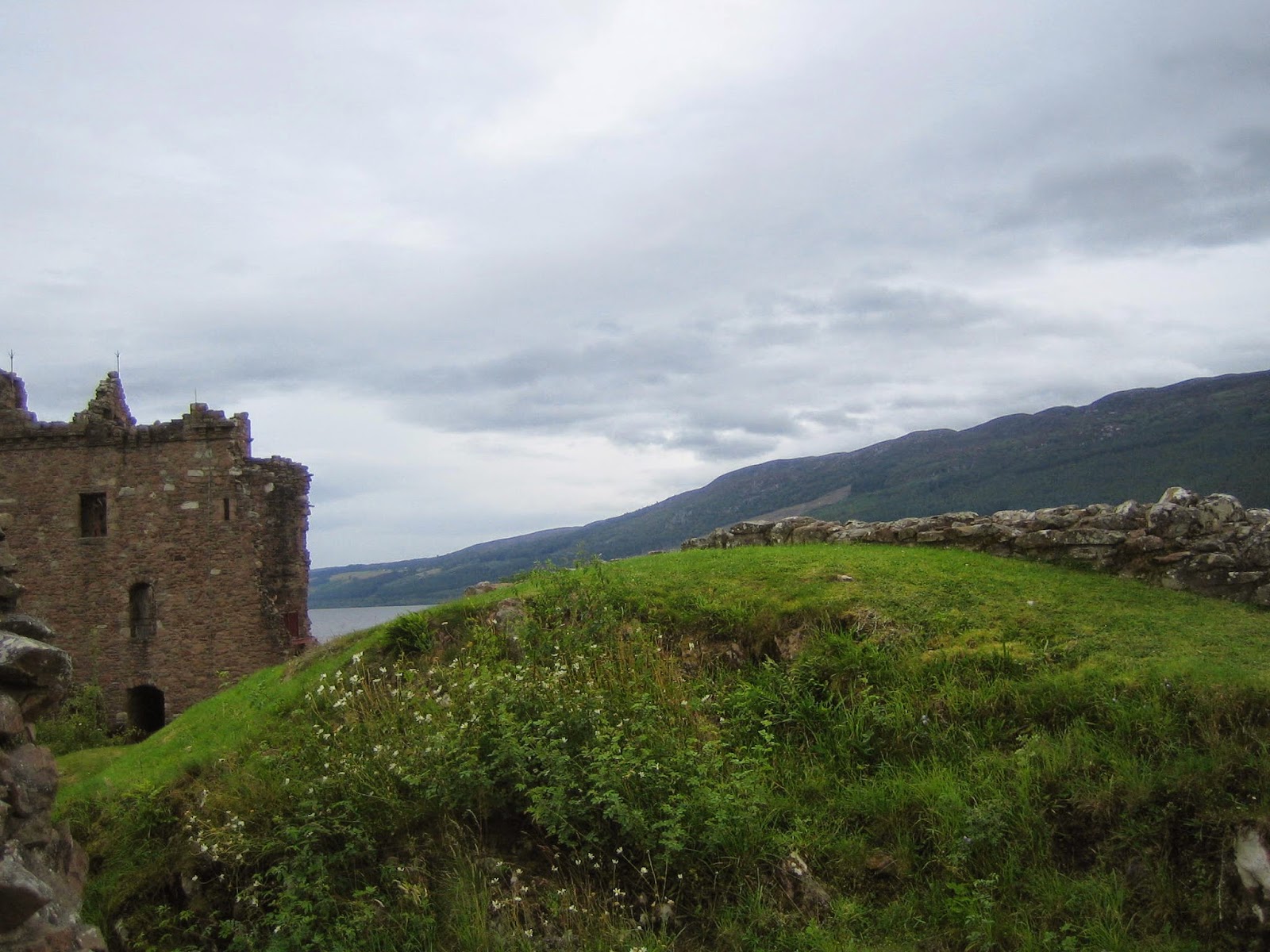 All this is being told in a few minutes film that gets shown in a room at the entrance of the castle.
The film doesn't finish with the word "The End", but with a curtain being rised and showing the real show that you are about to watch live: the glorious stumps of the castle rise, marvellous and melancholic, on the promontory in front of the loch.

One of the aspects I admire the most about the UK is their extraordinary skill on tourism marketing, something that us Italians, in spite of the huge patrimony we'd have available, completely lack, and that we'd better learn as soon as possible.
How many ruins do we have, ruins that have a millenary and very important history but that are left totally wasted, to get crumbled, without anyone that might be able to tell their own story, to tell the world how many things have happened there, to remind us that they are not just a common pile of stones?
Instead at Urquhart they've done this, and not only in Urquhart.
And it's not just a matter of being able to monetize a touristic resource (which, holy goodness, wouldn't even be that bad, anyway).
It's also a matter of being able to exploit a piece of your own history, of your own identity as a nation.
Something that has happened and that we shall not forget, because, willing it or not, it has taken us where we are nowadays.
History is not made of a boring list of dates written on books, it's made of episodes that have changes people's lifes: and travelling doesn't only mean getting to move in the space, but it can also be an opportunity to move within time and to get to know better what has happened before we have been here, but that has built and moulded the moment where we are now, the basis from where we have started to give a shape to our own identity.
I see this aspect being tied with the great respect for the elderlies that deeply belongs to the British culture: they are a part of our history as well, it's also because of them if we are what we are nowadays.
If we won't learn to have a better cure and respect for our past, we will never be able to build a better future, because we will always lack the awareness about where we come from - and, without that, how are we supposed to know where we want to go? 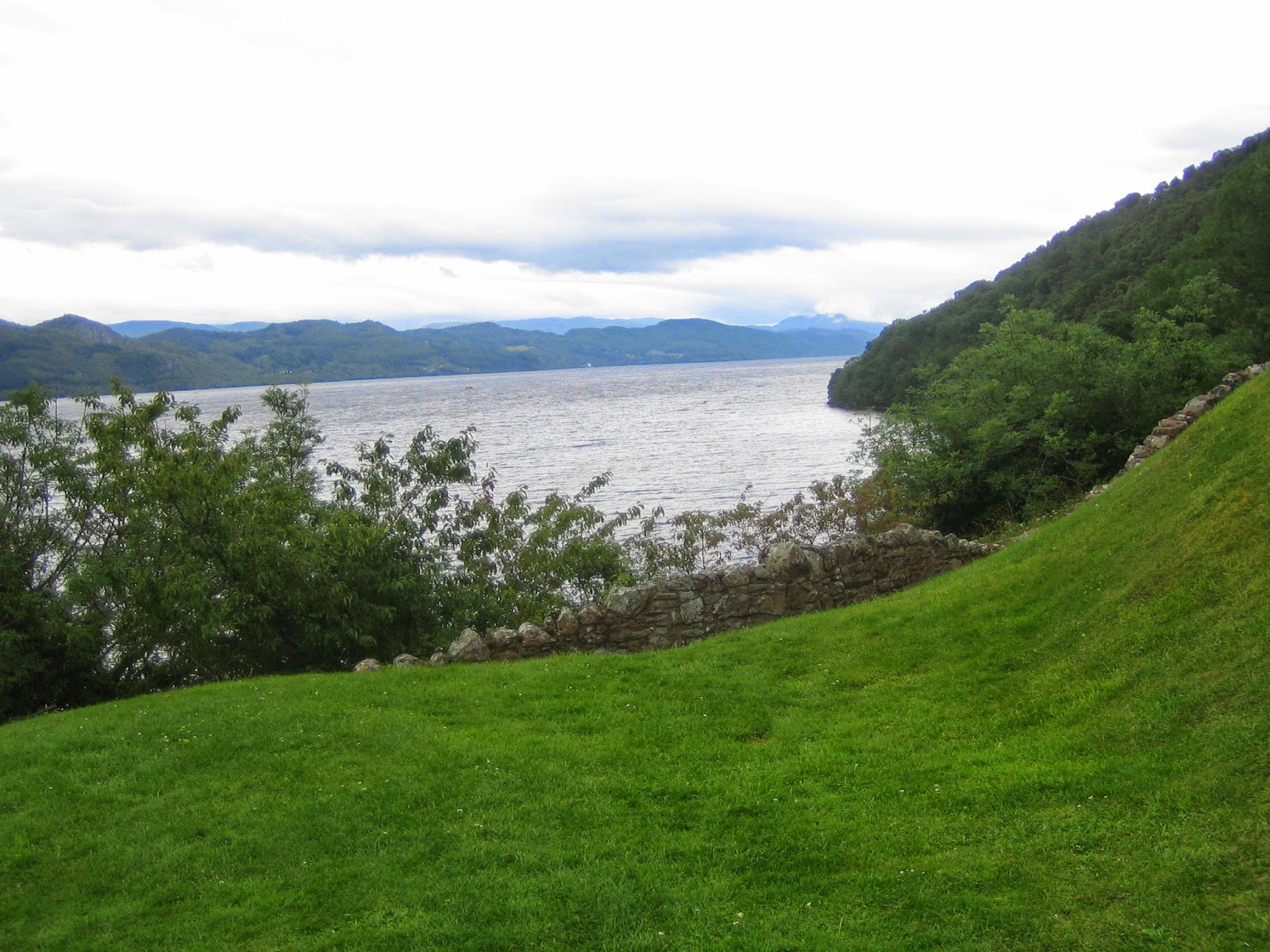 Well, but, as for me, I do know where I'd want to go: I'd want to go back there, to hang around the wounded skeleton of the castle, to caress with the eyes its stones, and, at one point, to lift up the eyes towards the mysterious spread of water opening in front of me, so grey and veiled with mist.
In every legend hides a tiny seed of truth, they say.
And who knows in what exactly consists of the one laying in the heart of the legend of this lake...
Maybe only the eyes of stone of the Urquhart Castle, who are not liable to the deceptions of the human mind and soul, might be able to tell...
Pubblicato da Serena Chiarle a 13:53