Villaggio Leumann, a corner of Switzerland near Turin

If you happen to go along the infinite Corso Francia with its many streetlights, travelling from Rivoli towards Torino, you won't help but noticing it.
The small houses of the Villaggio Leumann village of Collegno are a mixture between a Swiss town and Art Nouveau, as if someone had shaken up and mixed elements from the two styles: if buildings could actually procreate and reproduce themselves, with a random chromosomical recombination, like it happens for living beings, the result would be like this.
There are some trellis houses, some flamboyant element, wooden fences that demilit small gardens in bloom and pedestrian cobbled alleys, which represent a remarkable contrast with the ten-floors buildings and the asphalt surrounding them.
It's a bit like seeing a cow in a cement jungle. 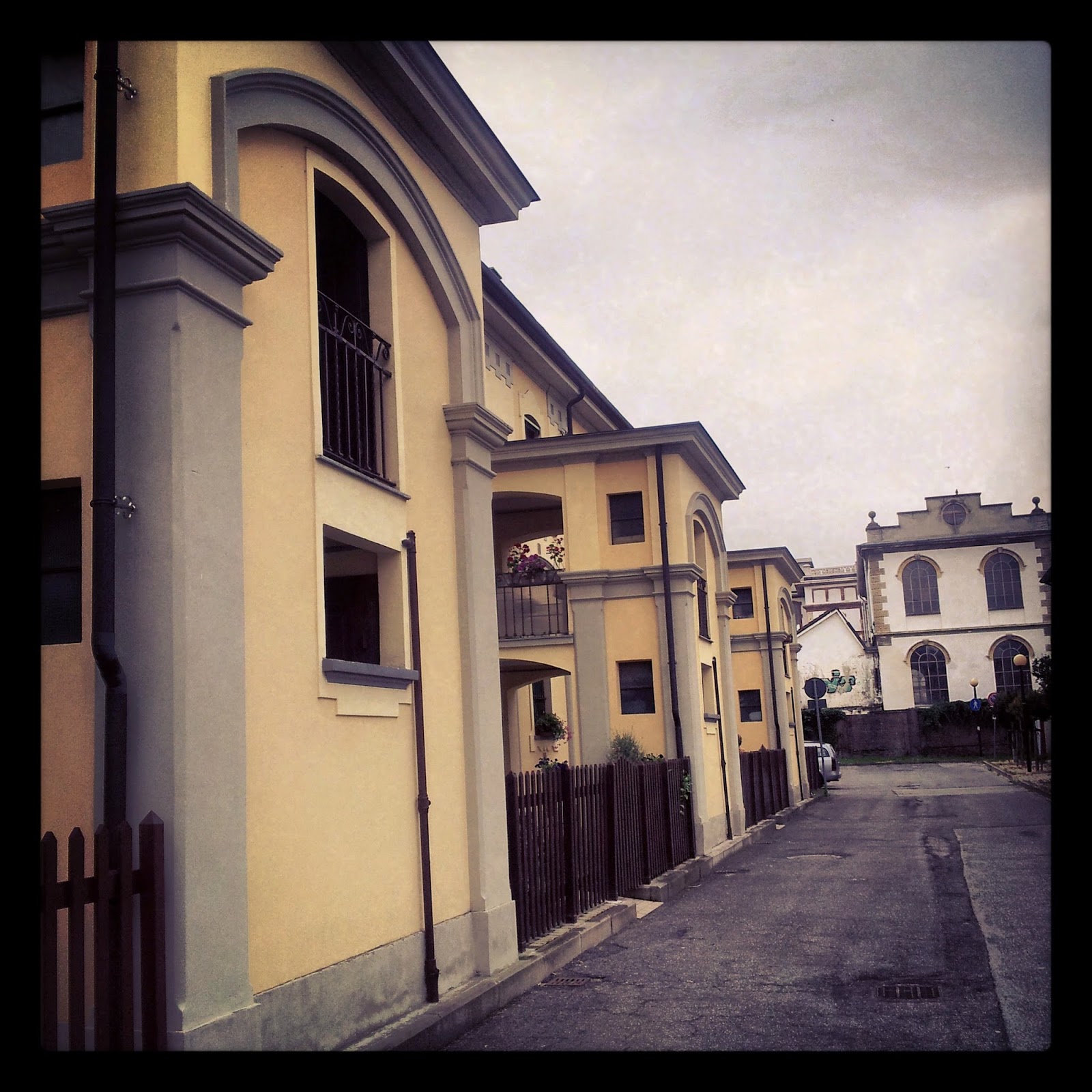 I used to pass in front of the Leumann every day when I went to school, and it was one of my fave spots which were marking the slow journey along the 38 streetlamps of Corso Francia, breaking the monotony of suburbian urban landscape a bit.
Back then I would have never told that one day I would have gone to live near there - but I don't actually think this would have been the one thing that would have amazed my old self the most, about my nowadays life.
So, since I'm close, and since having a blog now works as an alibi for allowing myself to spend my days wandering around and visiting all those places "just behind the corner" which, maybe out of laziness or maybe out of the logistic comfort paradox, are always being left behind, I've finally decided to explore around the Leumann's trellis houses. 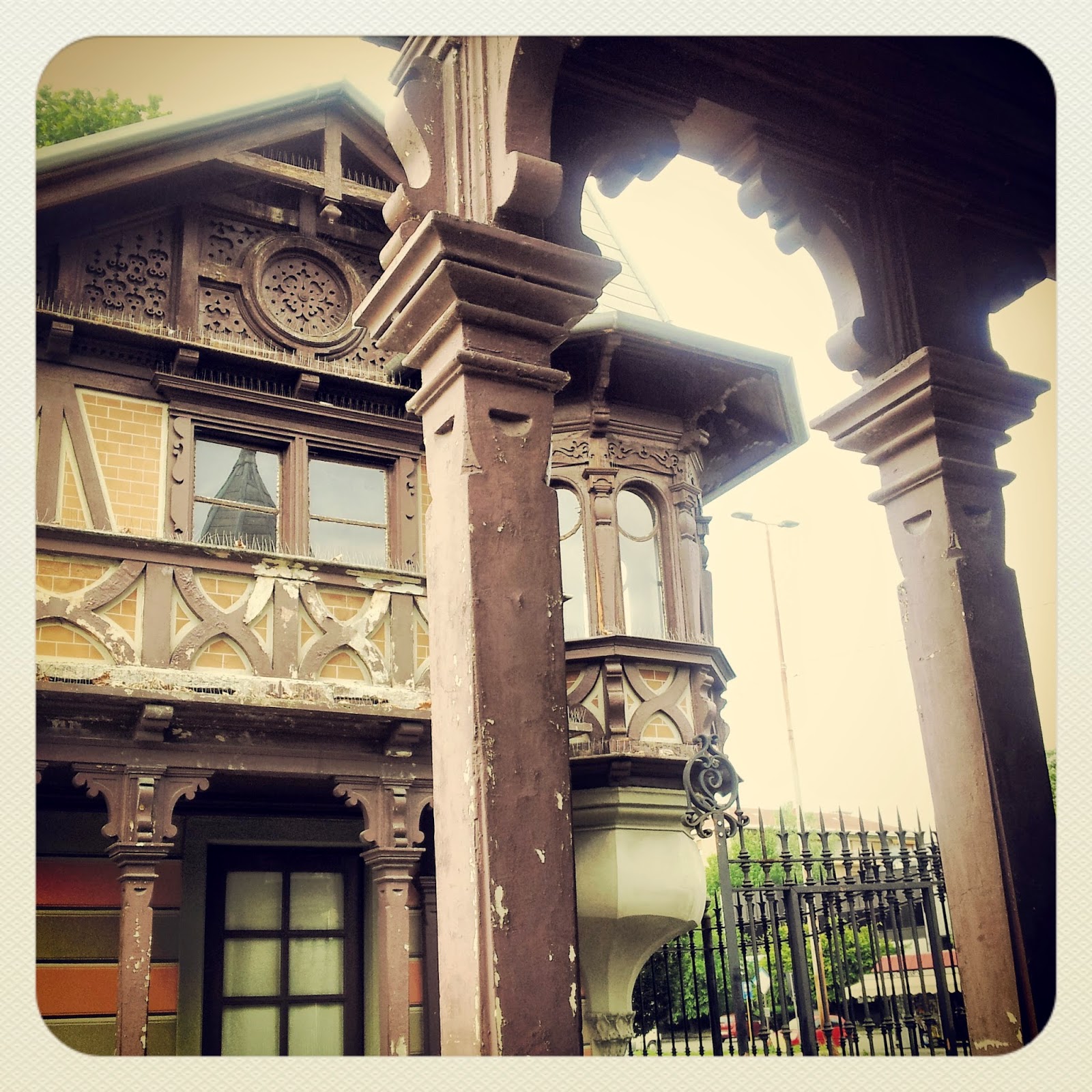 And this village is not only a lovely genetical-architectural experiment, it's actually an interesting piece of history, a tiny open air museum. 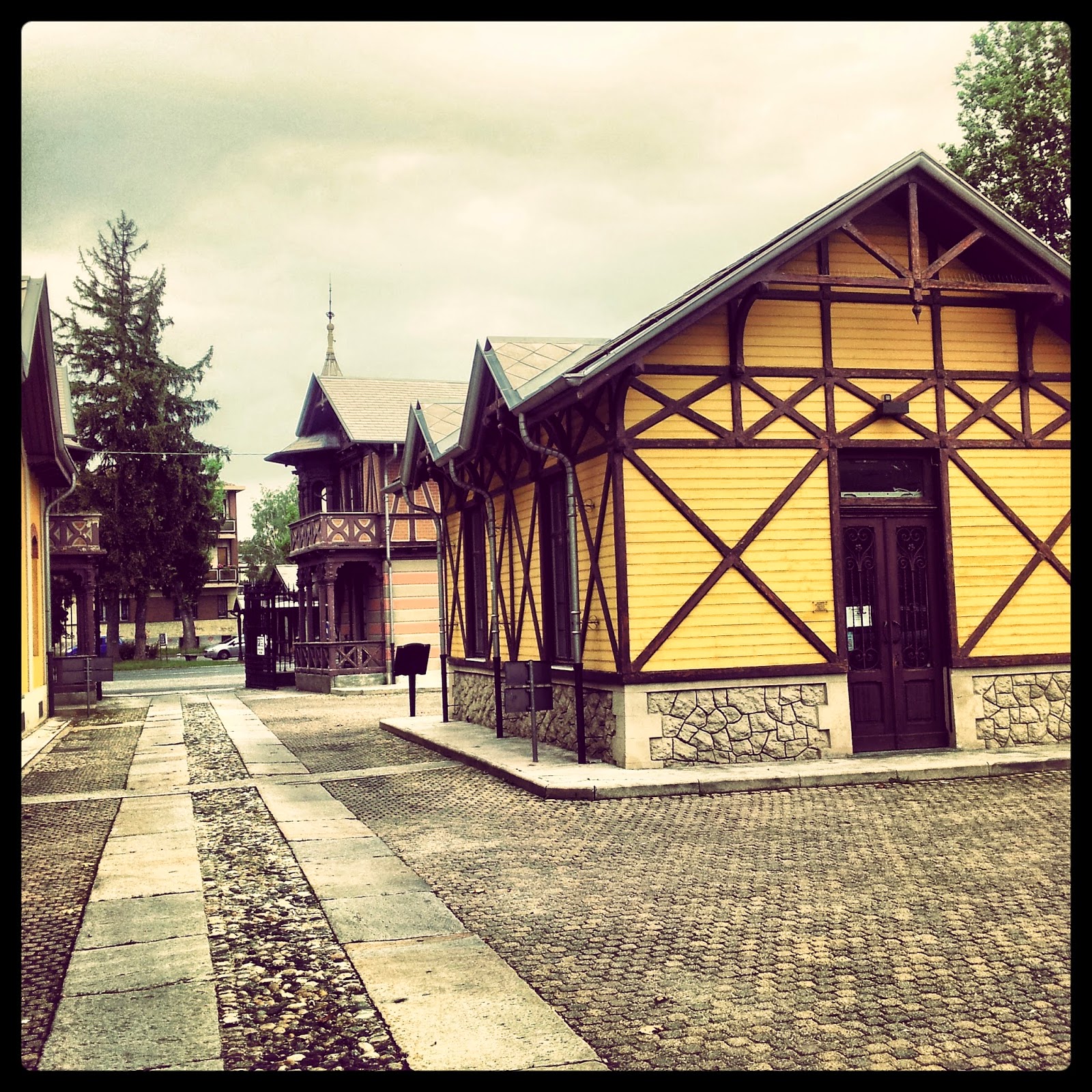 Napoleone Leumann was a Swiss (ditto) industrialist, who, during the second half of the 19th century, used to have a linen factory in Voghera, in the North of Italy, more or less near Milan.
By the way his name should be pronounced the German way, as in L-oy-mae-nn, but, both himself and this village, are nowadays remembered with the Italian pronounciation - L-ae-ou-mae-nn. 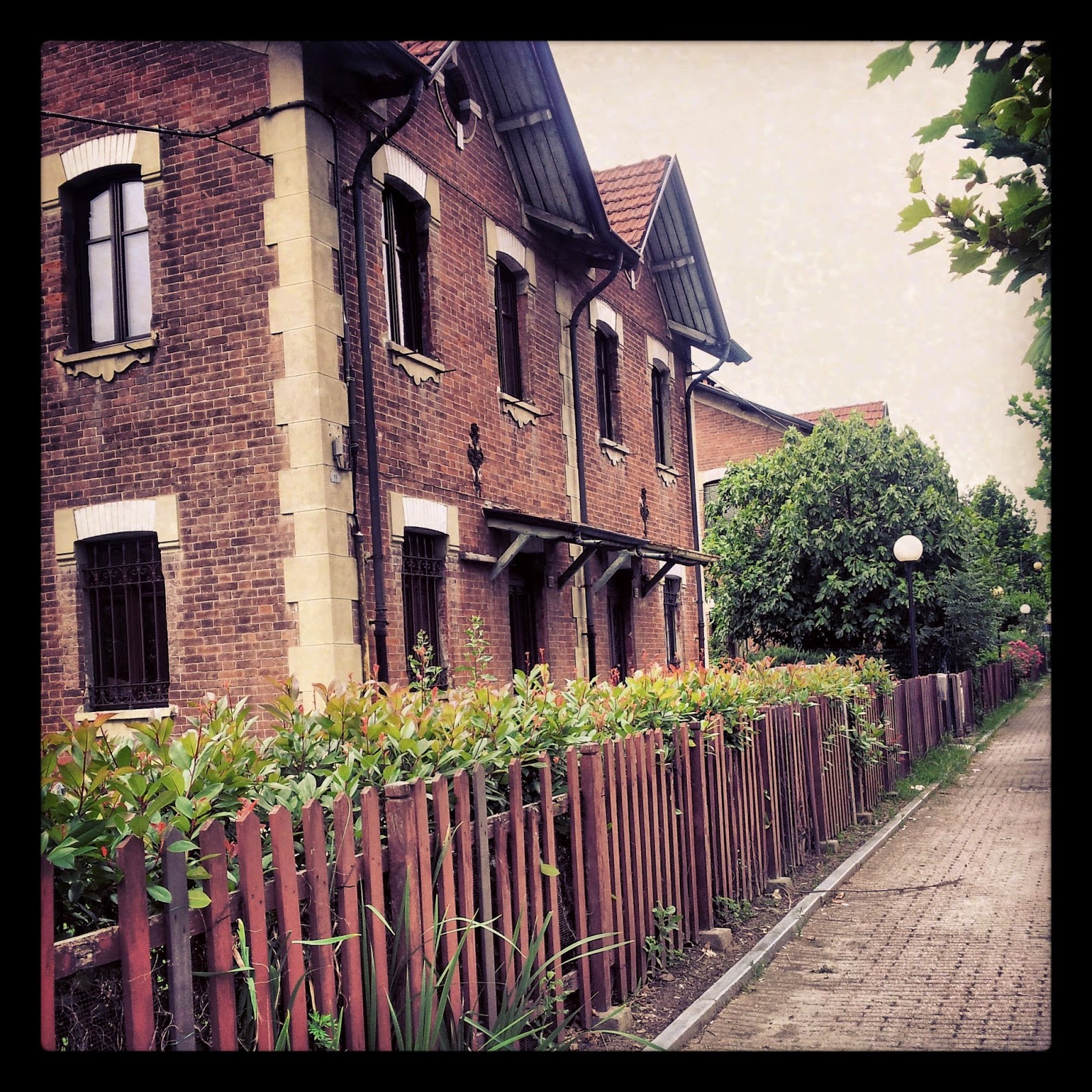 But what we were saying.
One day, in 1865, mr Leumann gets tired of producing linen in Voghera and decides that he wants to start focusing on cotton, and that he wants to do that near Turin, because that would be easier for the commerces with France.
By the way, during those years, opening an activity in Turin also meant to take benefit of some interesting incentives that the State had given to the city in order to "refund" it from the blow of no longer being a capital.
Ah, good old times... 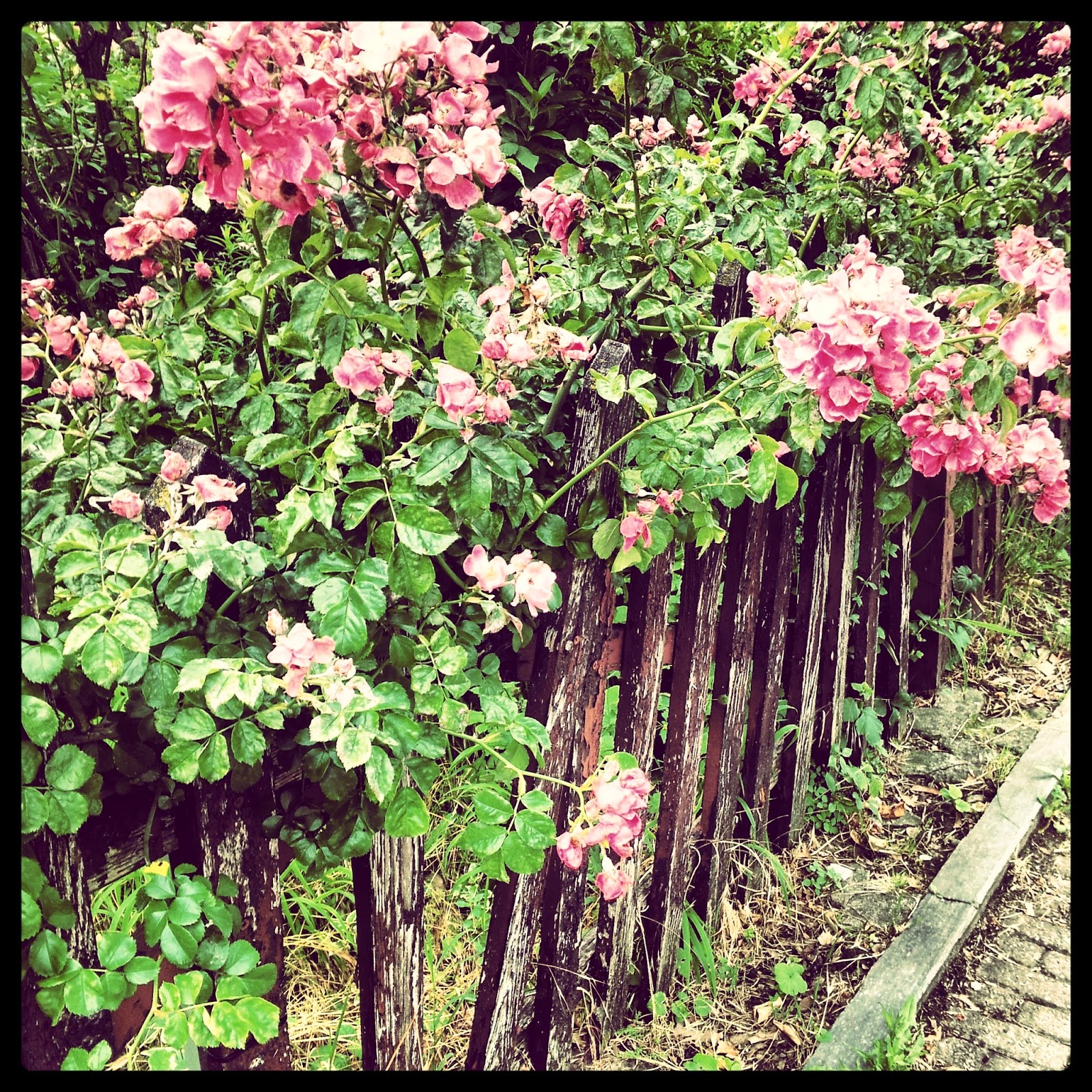 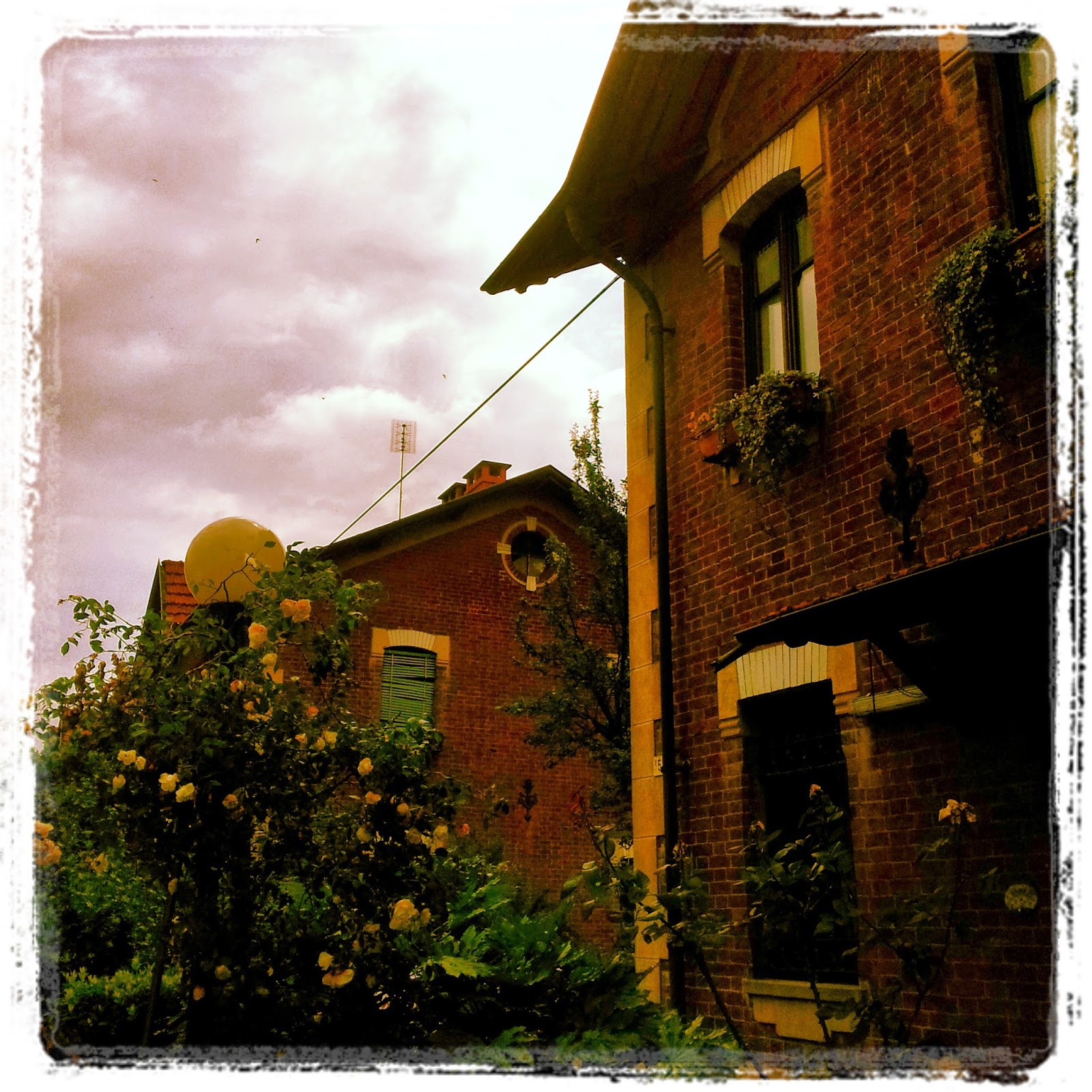 Collegno is near Turin, on the connection route towards France, and it also has a couple of useful irrigation channels - those that in Piedmontes dialect are called béalere.
Personally I have a quite pulp image of béalere, because when I was a kid my granny used to tell me that there were rats as big as hippos inside it - but I guess she was just doing some kind of educational psychological terrorism in order to keep me away from any dangerous kind of games near the béalera there was behind her house.
And anyway mr Leumann was just paying attention towards the productive usefulness of them, and not towards their genetically modified inhabitants... 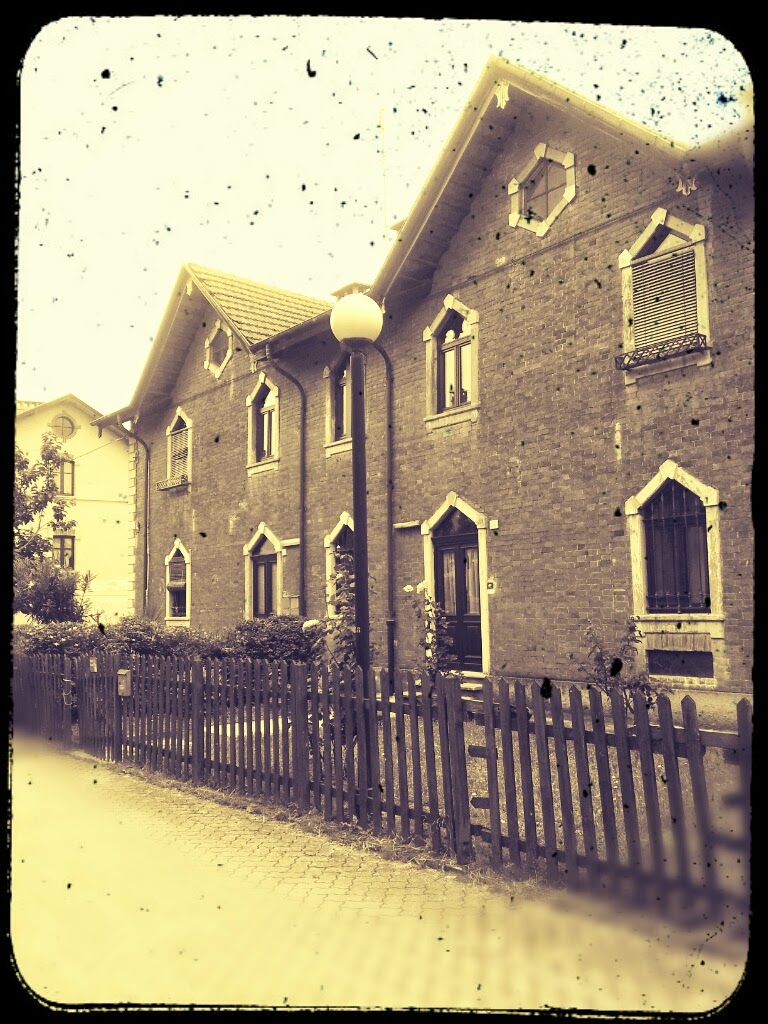 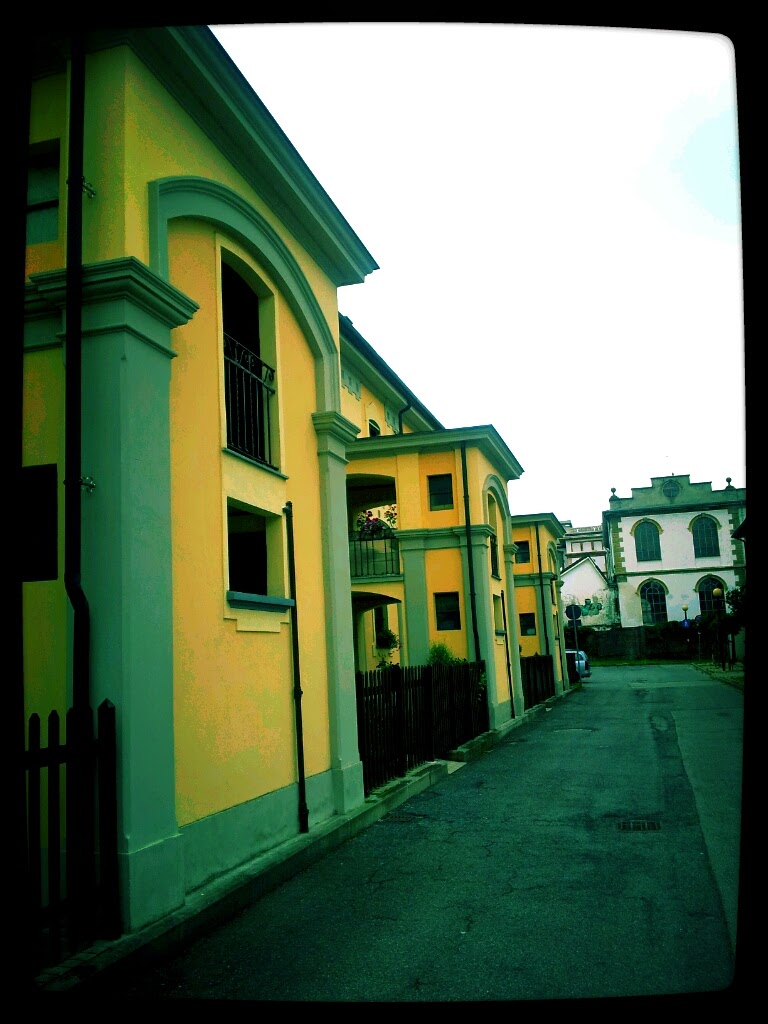 He was some kind of illuminated philanthropist, and he believed, fairly enough, that his workers could have worked and produced better if they could had a better life style, taking care of their well being, their education and their health. 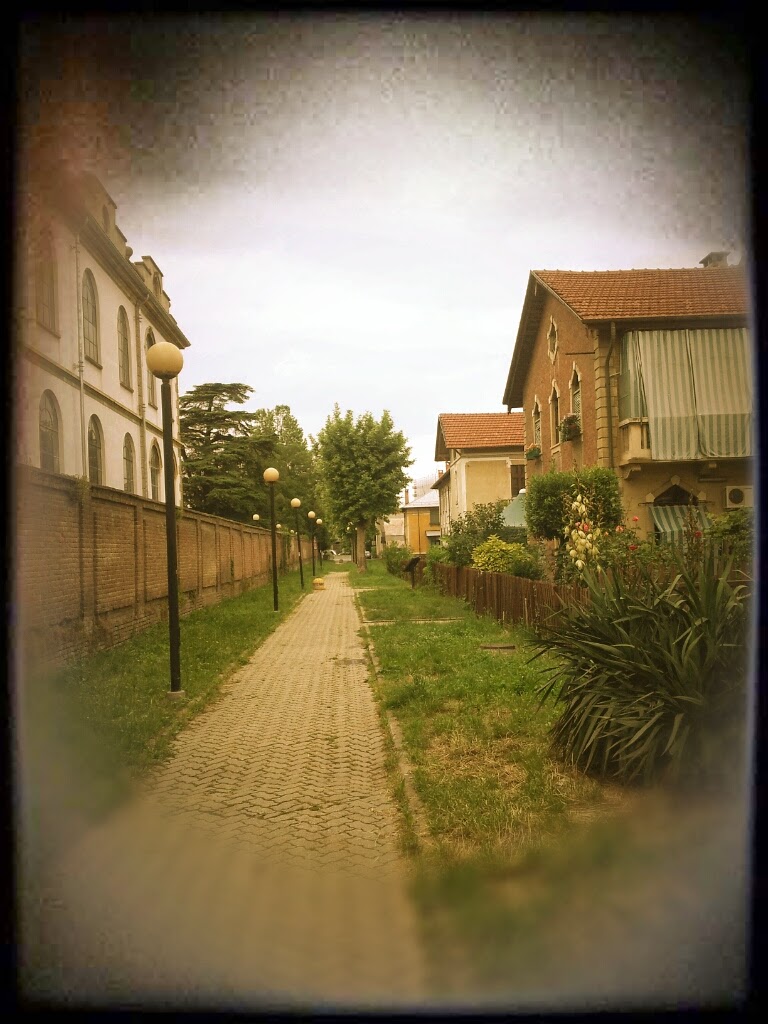 He therefore decides to build a whole village around the factory, made of 59 cottages which used to host up to a thousand of people, all cotton mill's employees and their families, a church, a primary school, a kindergarden, some public baths, a surgery, a gym, a post office and a boarding school for the young working girls. 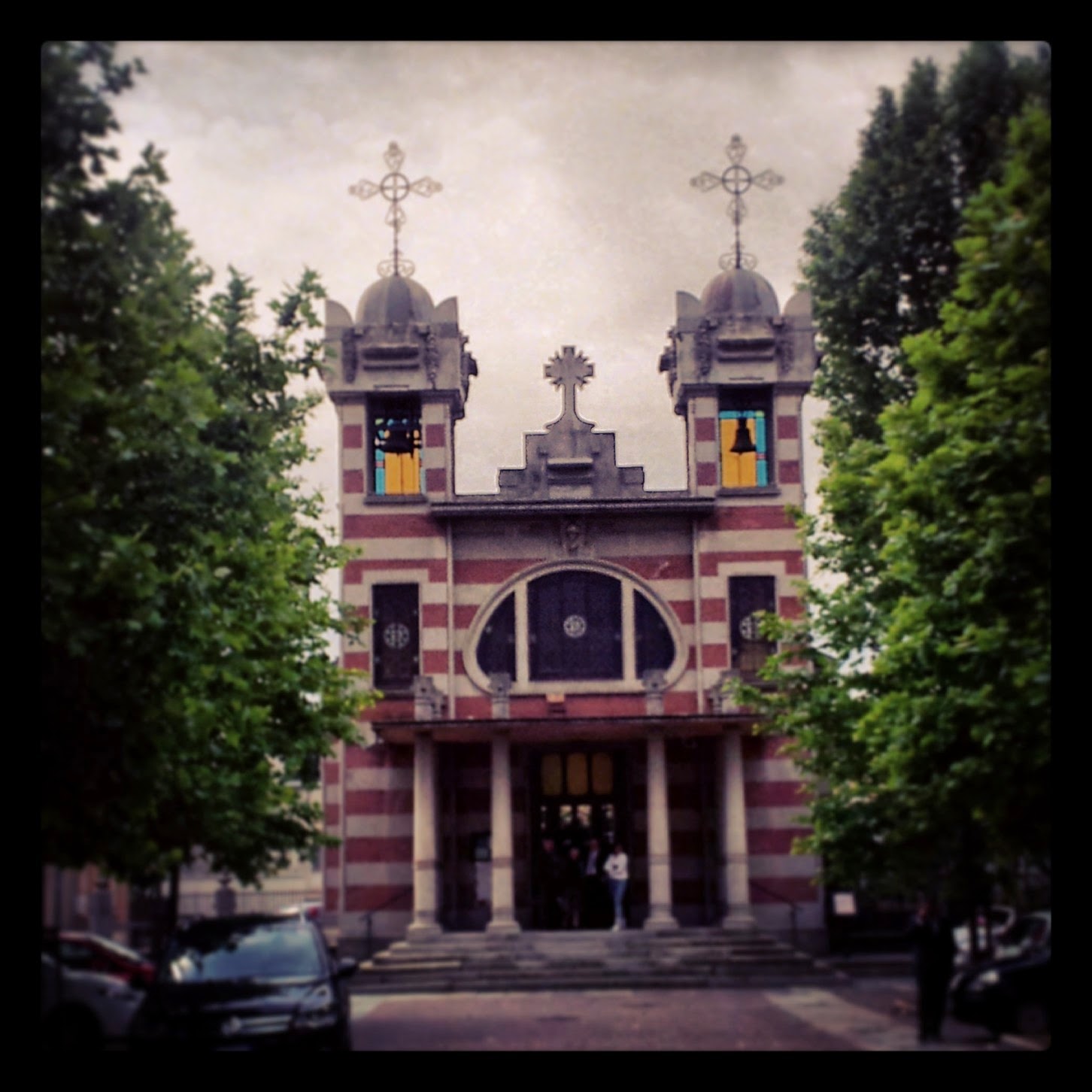 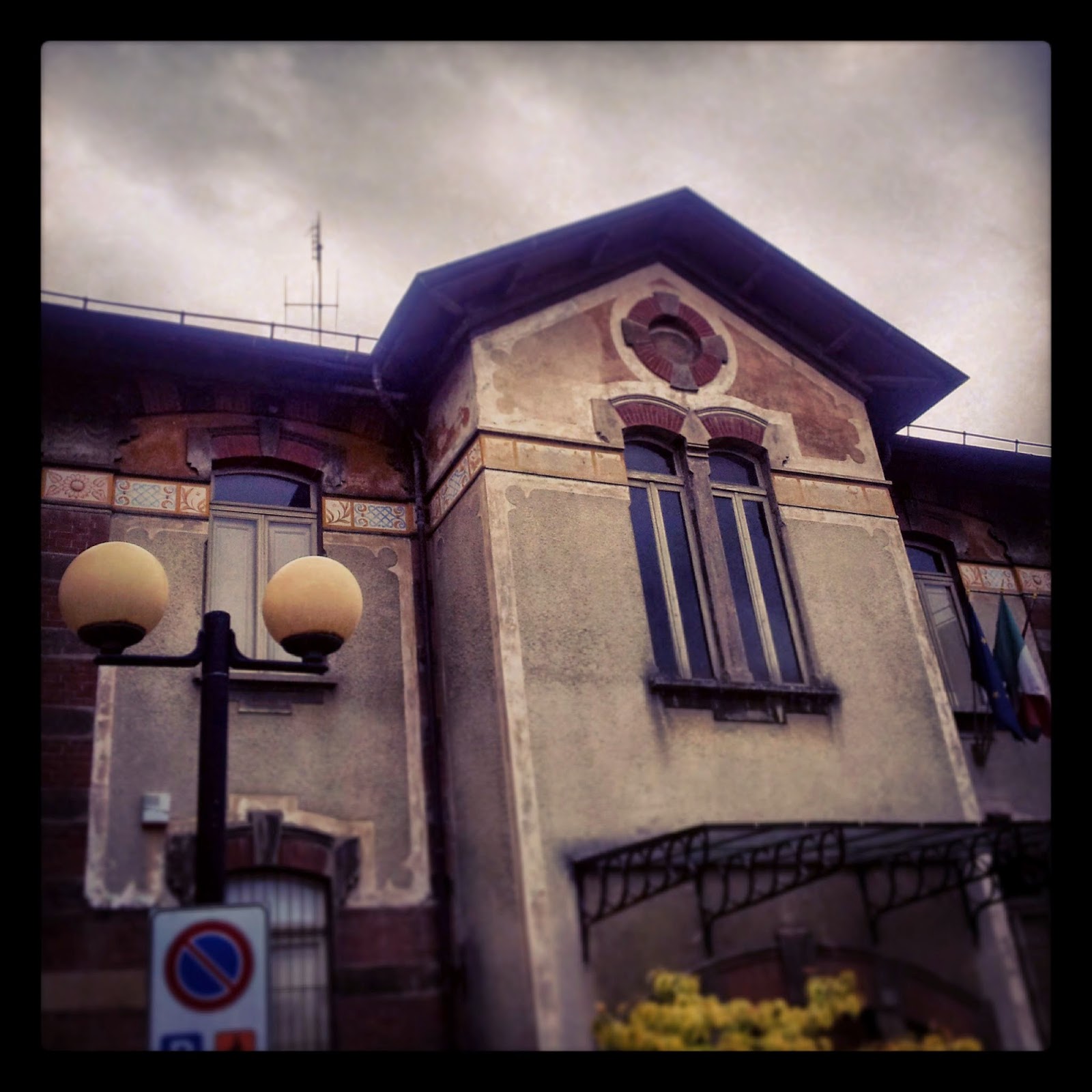 The church had been dedicated to the Saint who brings the name of Leumann's mother, Elisabetta; the school instead had been dedicated to his daughter, who died as a kid; and the whole project had been given to engineer Pietro Fenoglio: Leumann had in mind a small countryside Swiss village, but Fenoglio was the greatest exponent of Art Nouveau in Turin, as it's witnessed by the many palaces he has left downtown - and here is where the medley that charachterizes the style of this place got started. 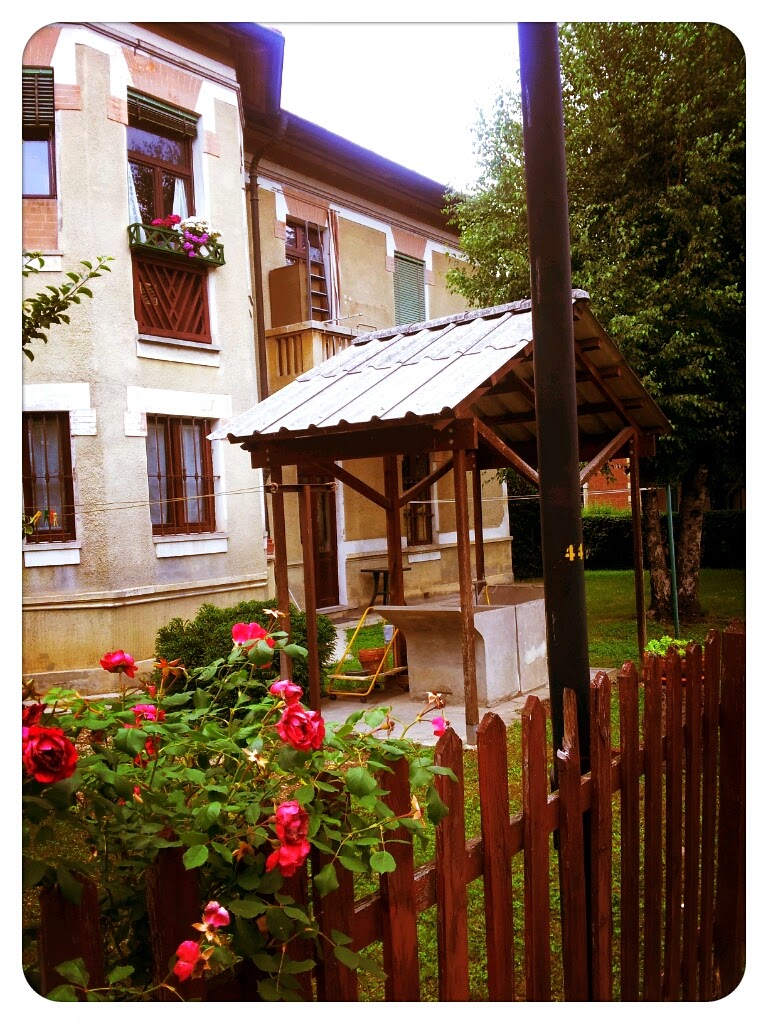 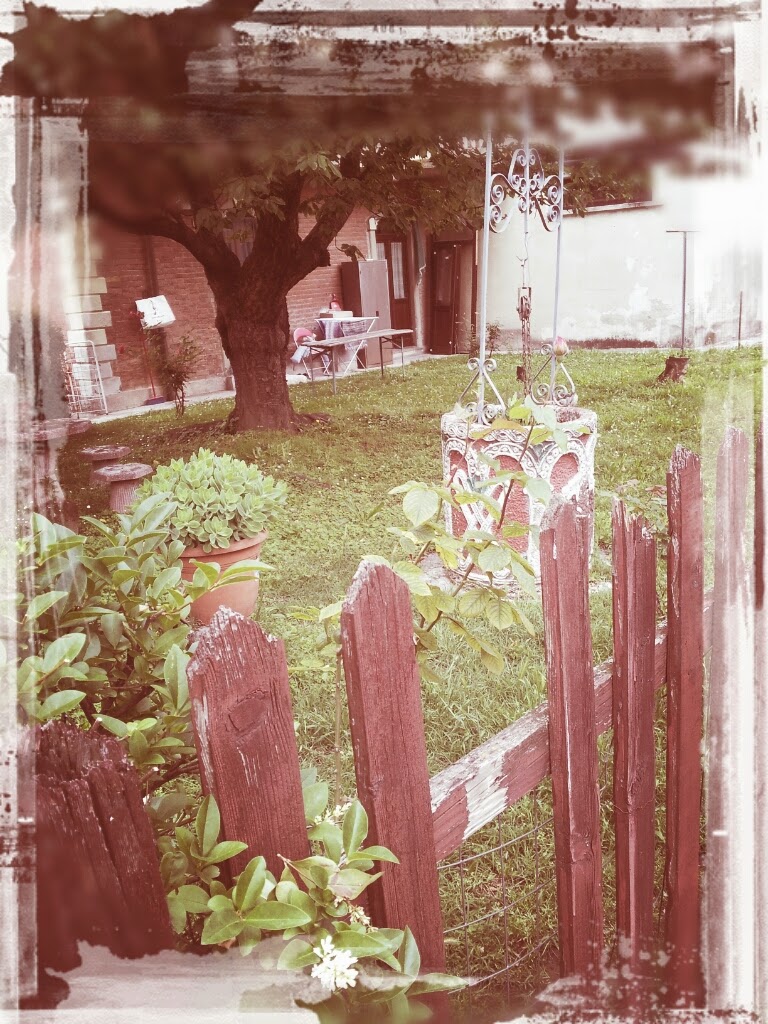 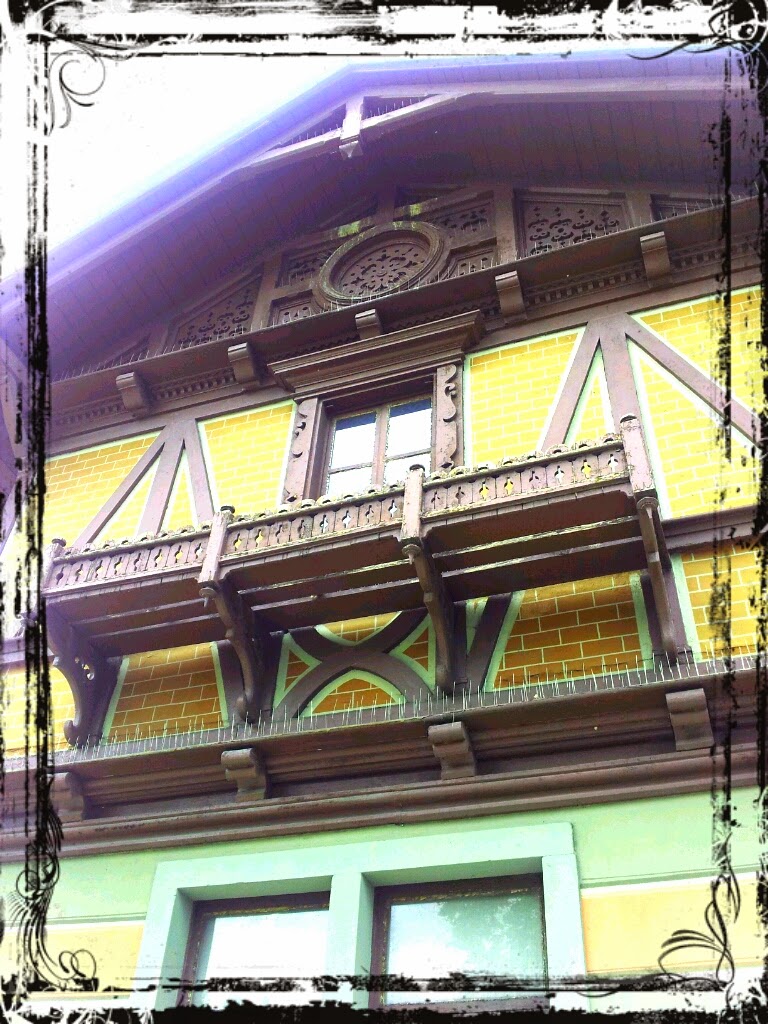 The cotton mill grew and flourished as long as Leumann lived, but, unfortunately, after his death, his heirs were no longer able to keep a management as efficient, and in the 70s it closed down.
The village went under the management of Collegno municipality, which gave some of the houses to some ex employees and alloted the ones left according to the housing lists - which is still being done nowadays. 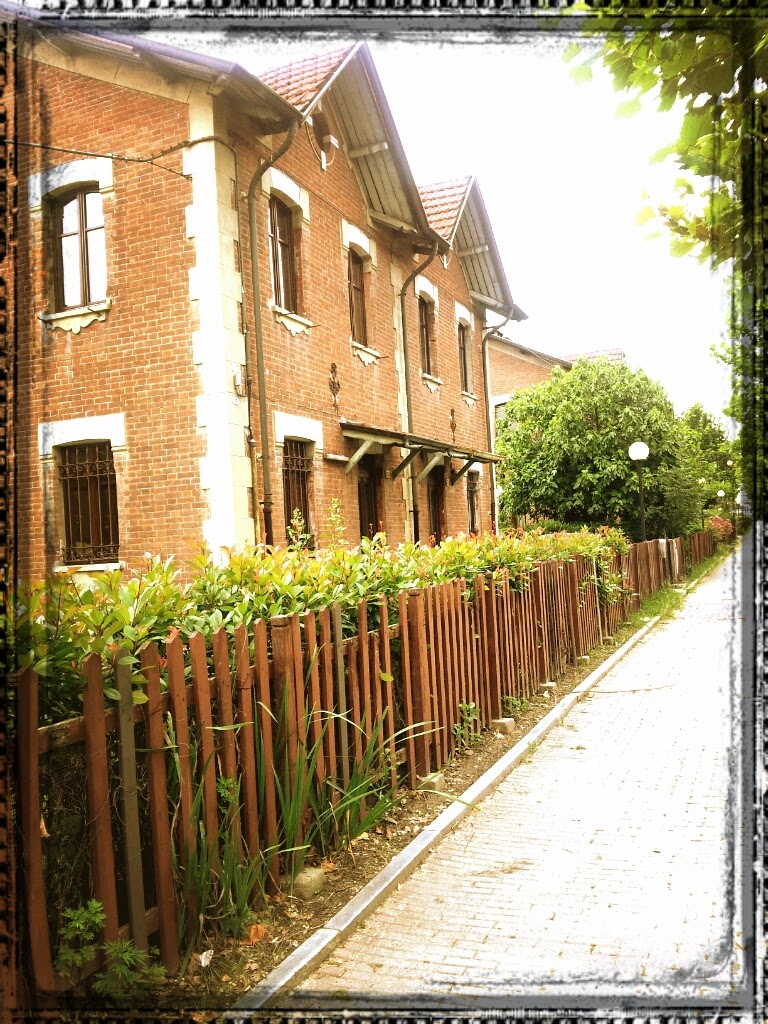 Maybe some maintenance here and there would do, but all in all the village is still quite well preserved and it's a valid and interesting historical and cultural witness.
When I visited, in the Santa Elisabetta church there was a wedding being celebrated. One of the two schools is still active, while in the boarding school today there is the public library.
In the cotton mill building, instead, there is a clothes outlet. 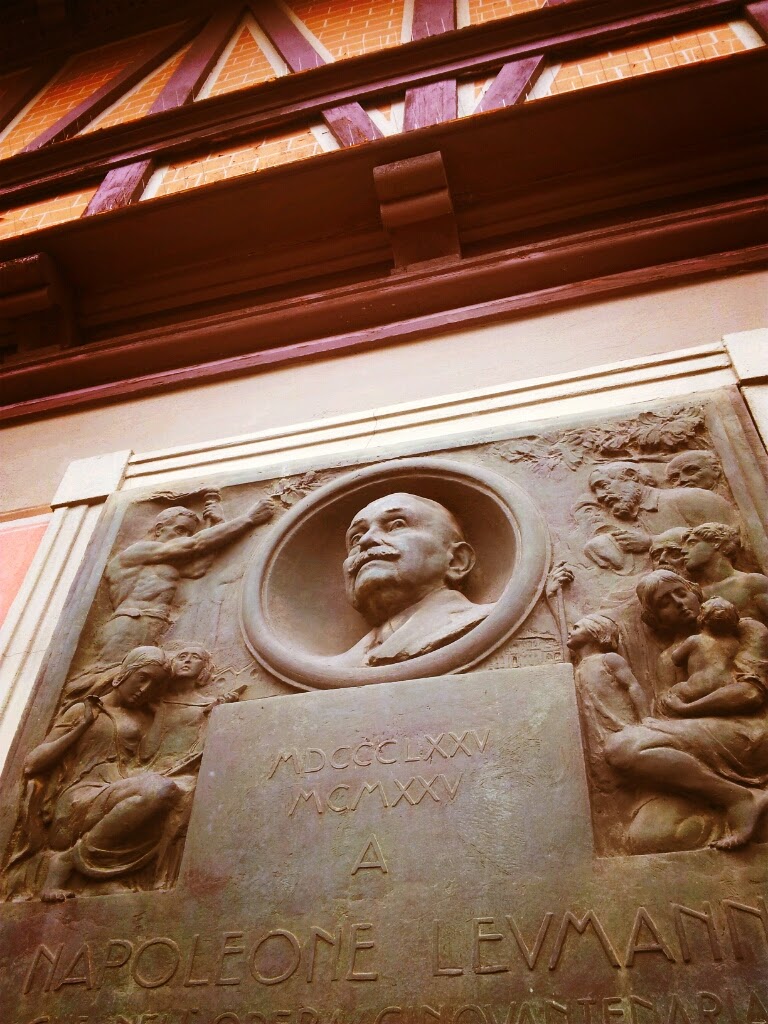 I'm not sure it just sells cotton clothes, but I think that, after all, mr Leumann would have probably not minded it...