Bonaventure Island - home of the gannets in Québec

When we got there it was surrounded by the mist.
It was looking like a pirate ship coming from the fog, and the gannets coveys curled up in the rock's cracks looked like its crew.
Bonaventure Island belongs to the National Park that has its same name, associated to the Rocher Percé, the rocky spur that to someone reminds a graceful girl, but that for me is like a bison drinking, of which I've told you about here and that is just a few meters away from the coast of the Gaspesie, in Québec (Canada).
Island is uninhabited since 1971, the year when it's officially been transformed into a Park.
Just uninhabited by human beings, of course; but it seems to be the favourite place for almost 300.000 gannets.
Why these animals have chosen this place so avidly and eagerly, instead of just any other else, we will never get to know (I'm a cat, after all, so it's just difficult to get to feel empathy towards birds) - but one thing is for sure.
Gannets really have made a very good choice.
We get there by boat from Percé early in the morning, with grey waters and mist veils that muffle the air and that shade away the edges of the faraway shore and of the rocky mass of the island that is slowly appearing at the horizon, getting closer and closer.
Its stone profile is rough and jagged, brown, brushed with tufts of vegetation of an intense and dark green. 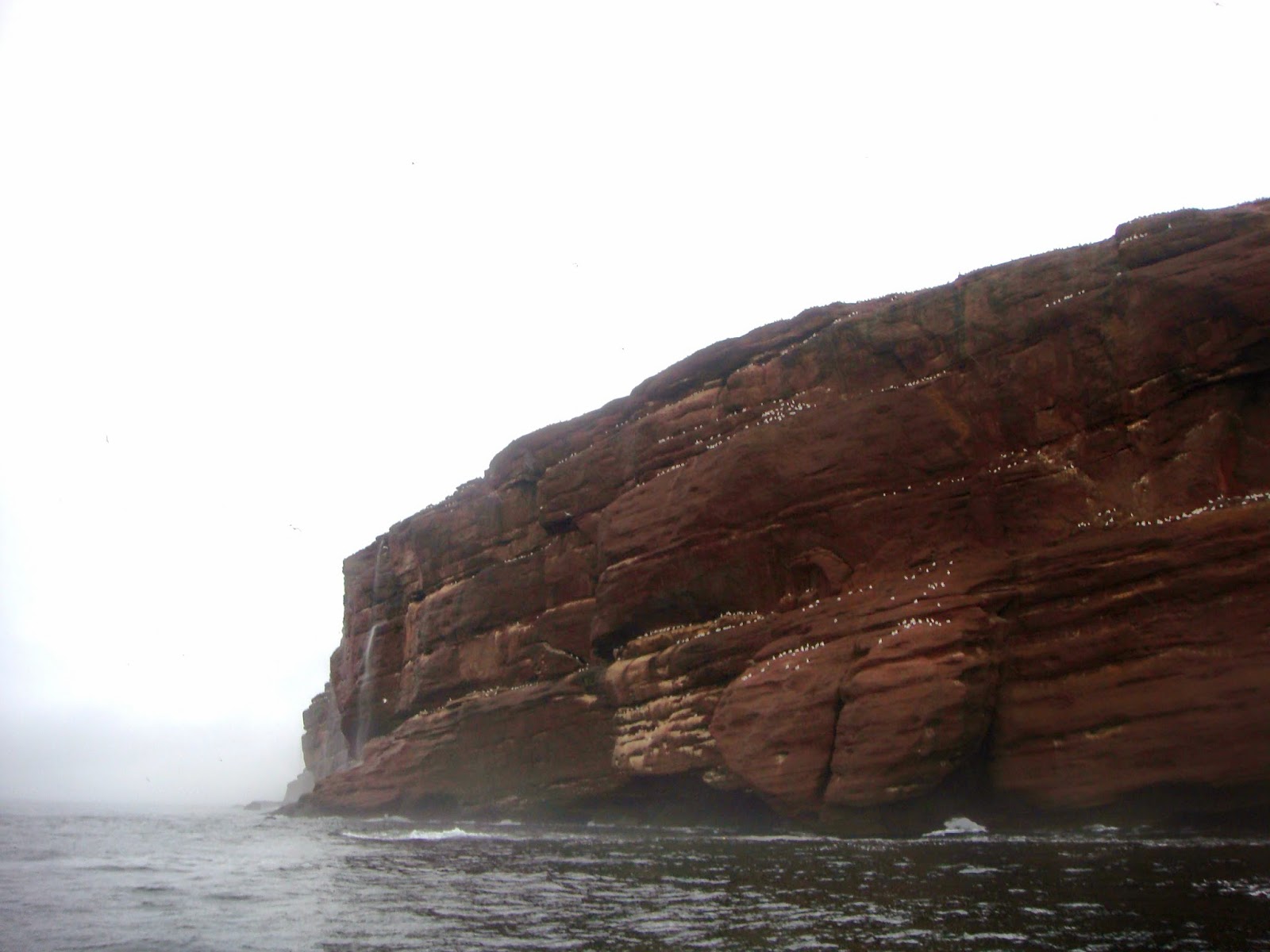 But what strikes you the most are the many, many small white dots that constellate the rough cheeks of the promontory, like mushrooms in the woods, or like pins' heads among the instruments of a tailor.
It's them, it's the island's inhabitants.
They are waiting for us, and, just for a moment, we hope we are going to be welcome. 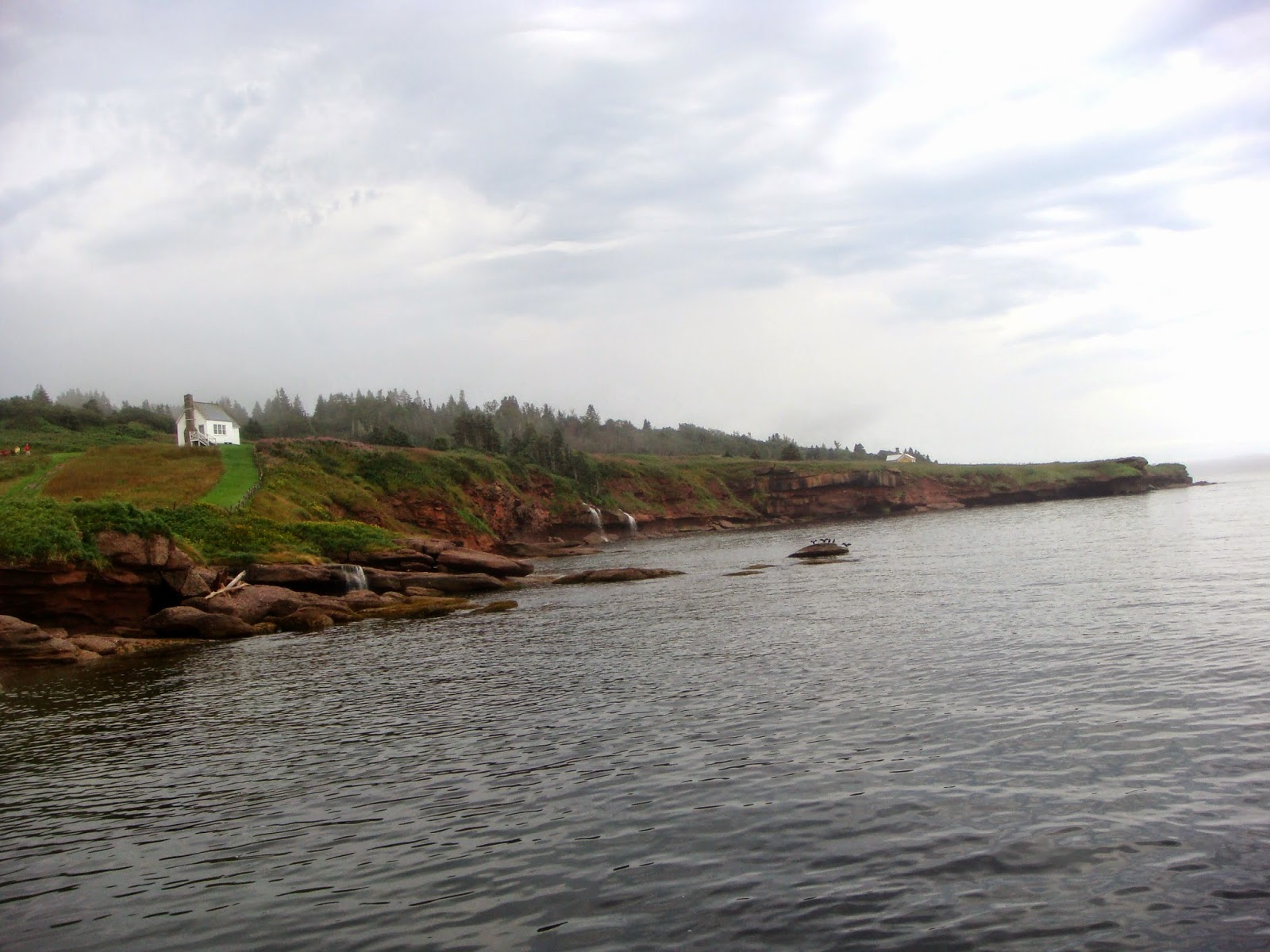 The boat docks on the pier among cold sprays of silver water.
Fog keeps on being a veil that covers it all around, but, now that we are there, island is starting to coily show us her face.
And, even if it's frowning, I get strucked by its beauty, wild but welcoming. 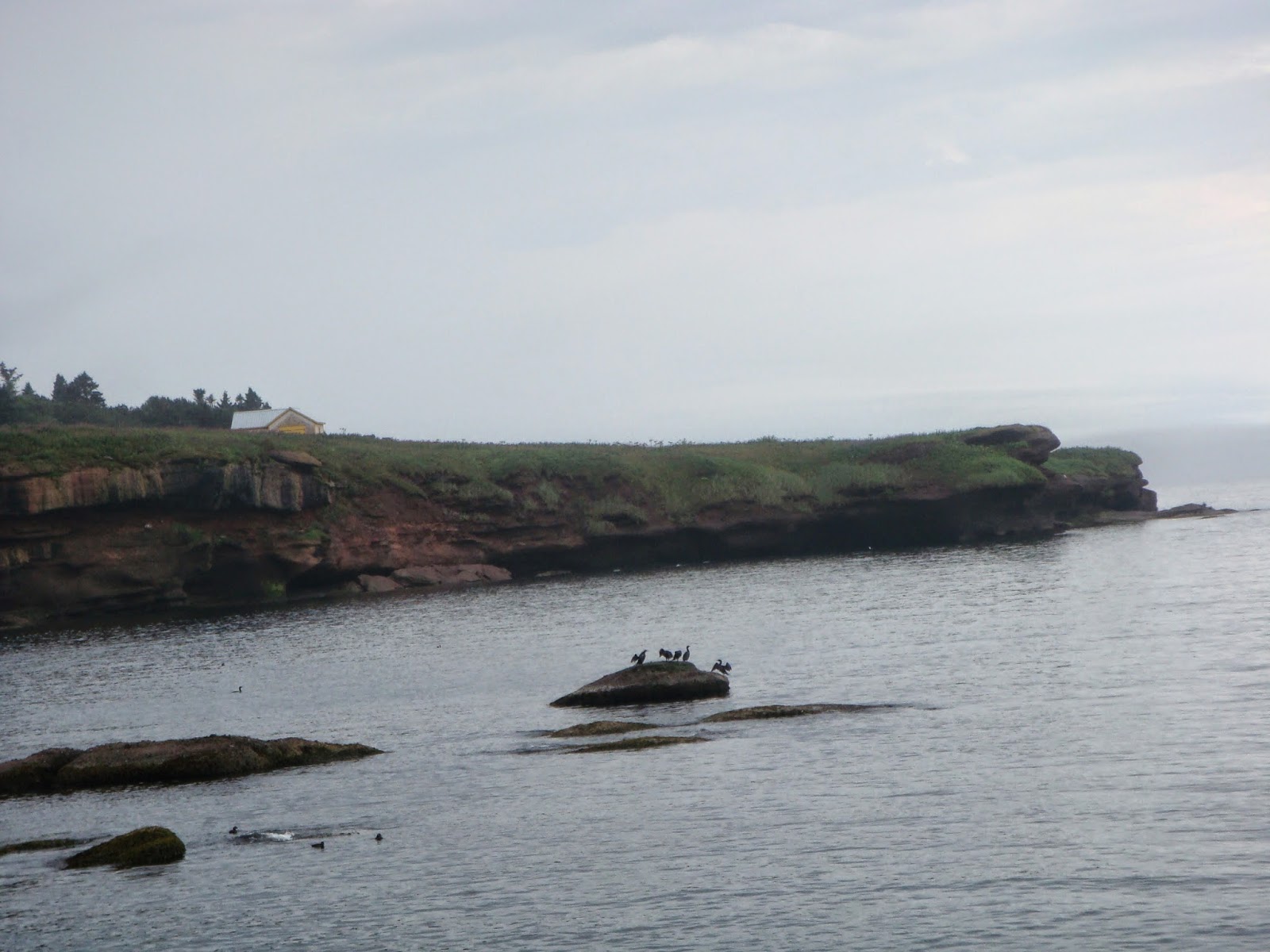 There are small wooden houses - white, grey, red, which used to be inhabited until 40 years ago and nowadays used by the park keepers.
There are pointy conifers that poke the fog, pink flowers spreads, small waterfalls that caress smooth brown rocks and some gannets chatting in the middle of the water. 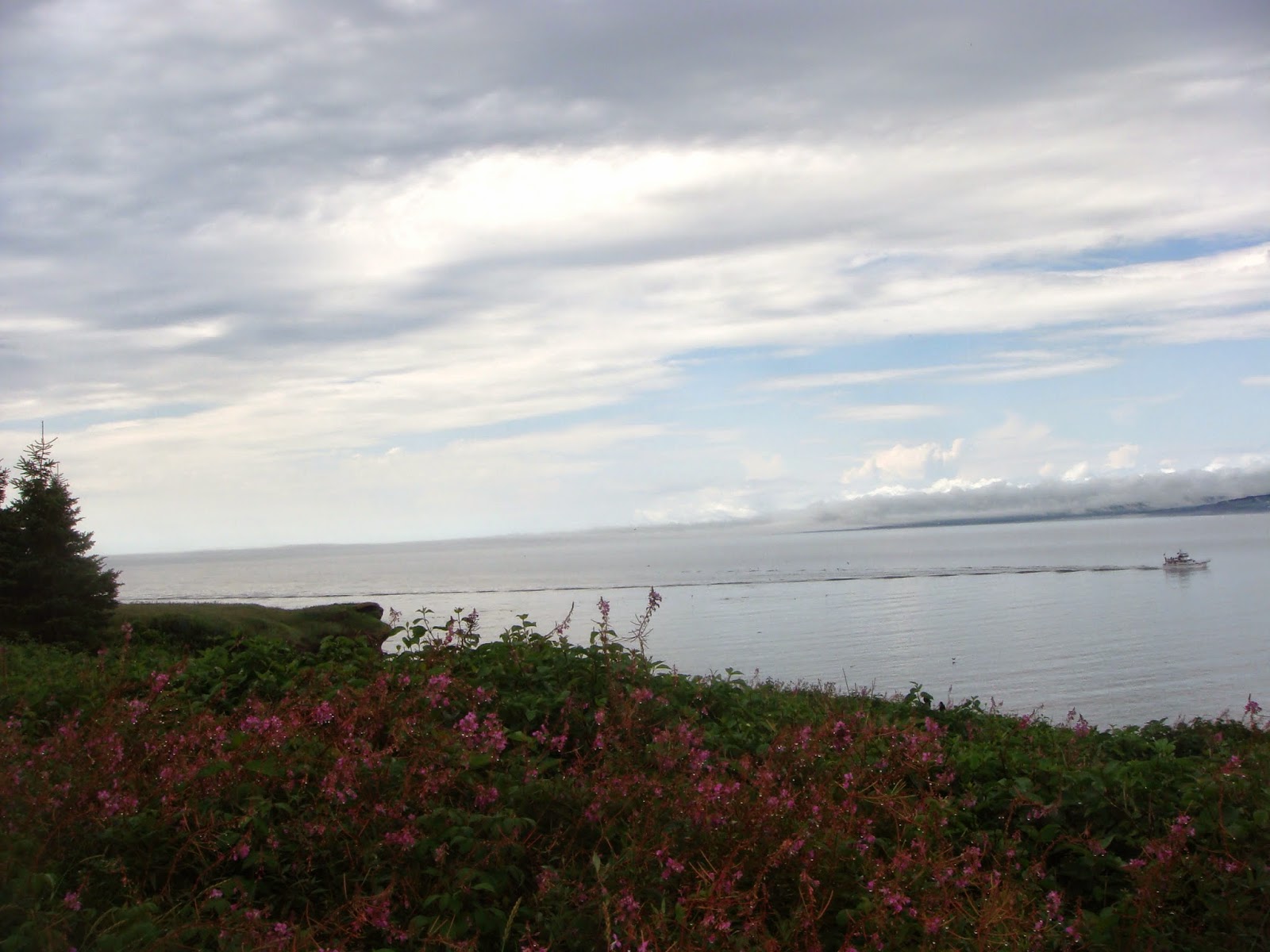 It's August, but temperatures are chilly.
We get to start the 3 hours path which coasts the island perimeter, the Chemin du Roi, wearing three layers of sweaters, cardigans and raincoats. 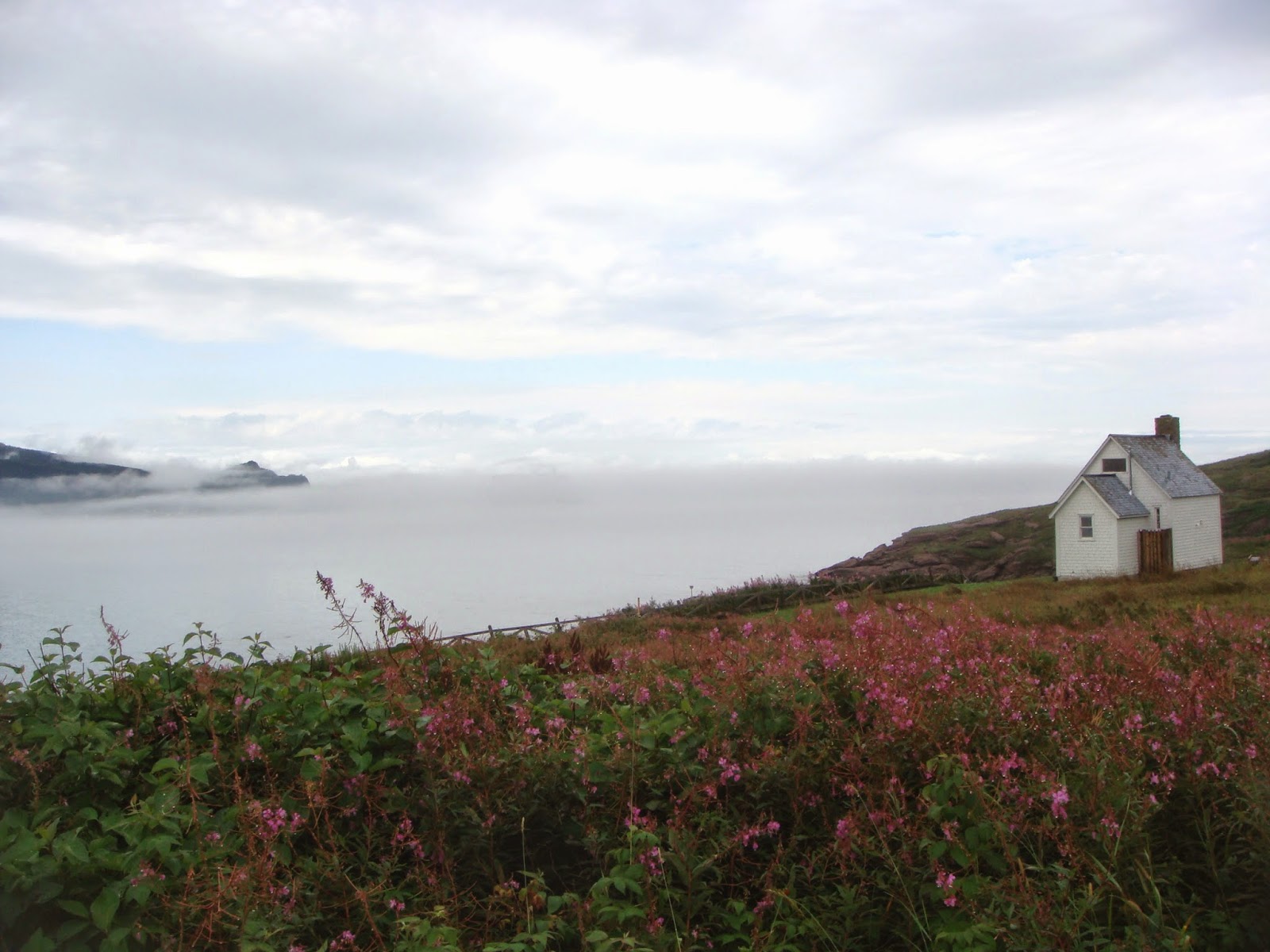 In the meantime fog is sliding down like a grey silk dressing gown: it's curled on the water, so thick that you cannot see the river any longer - but it has revealed the bare skin of a very blue and luminous sky.
Our hike starts with a good omen. 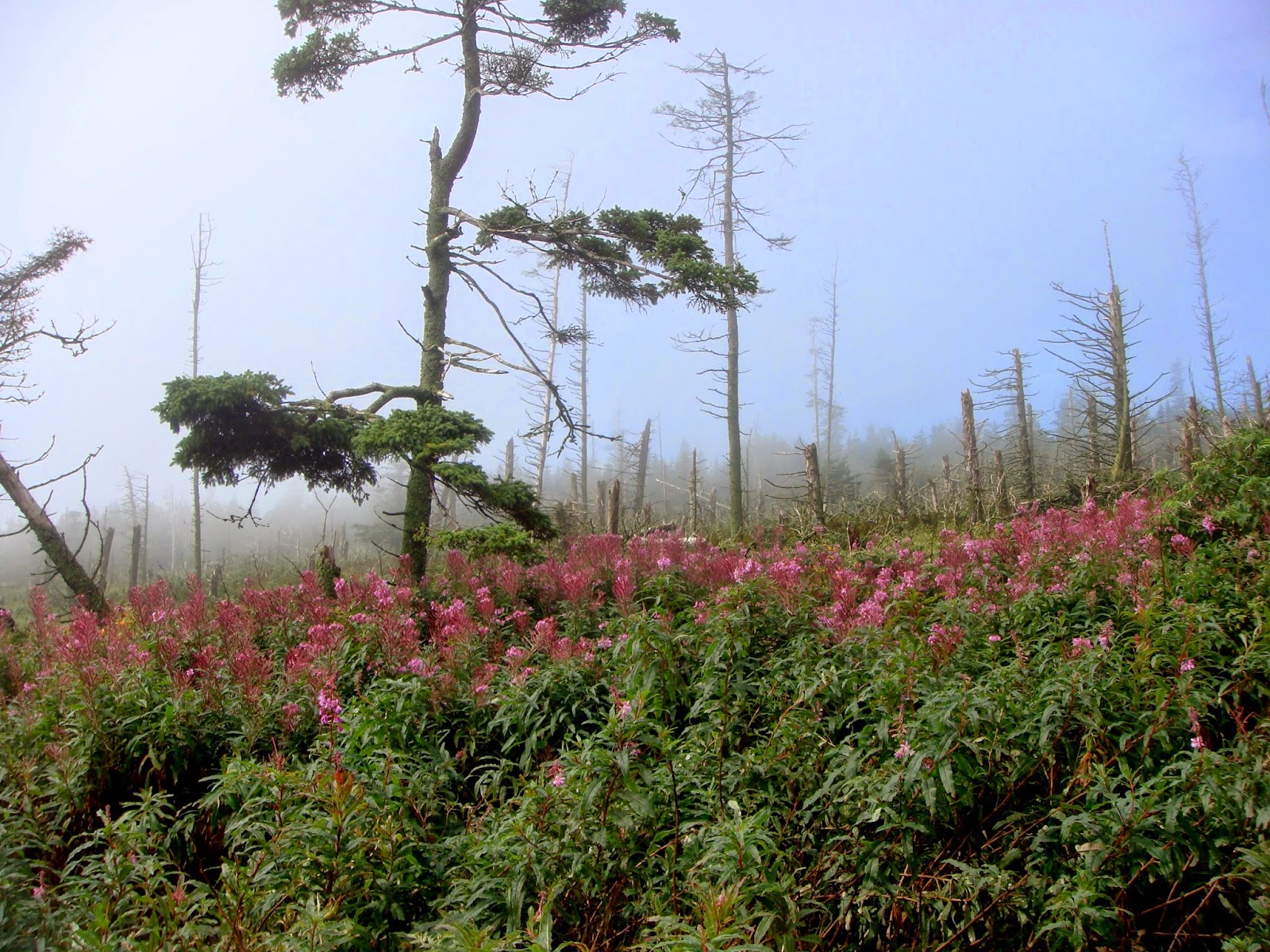 And the mixture of fog, sky, green and sea is a shuffle of intense colours, of a fresh and pure beauty.

The path gets into the conifers wood. 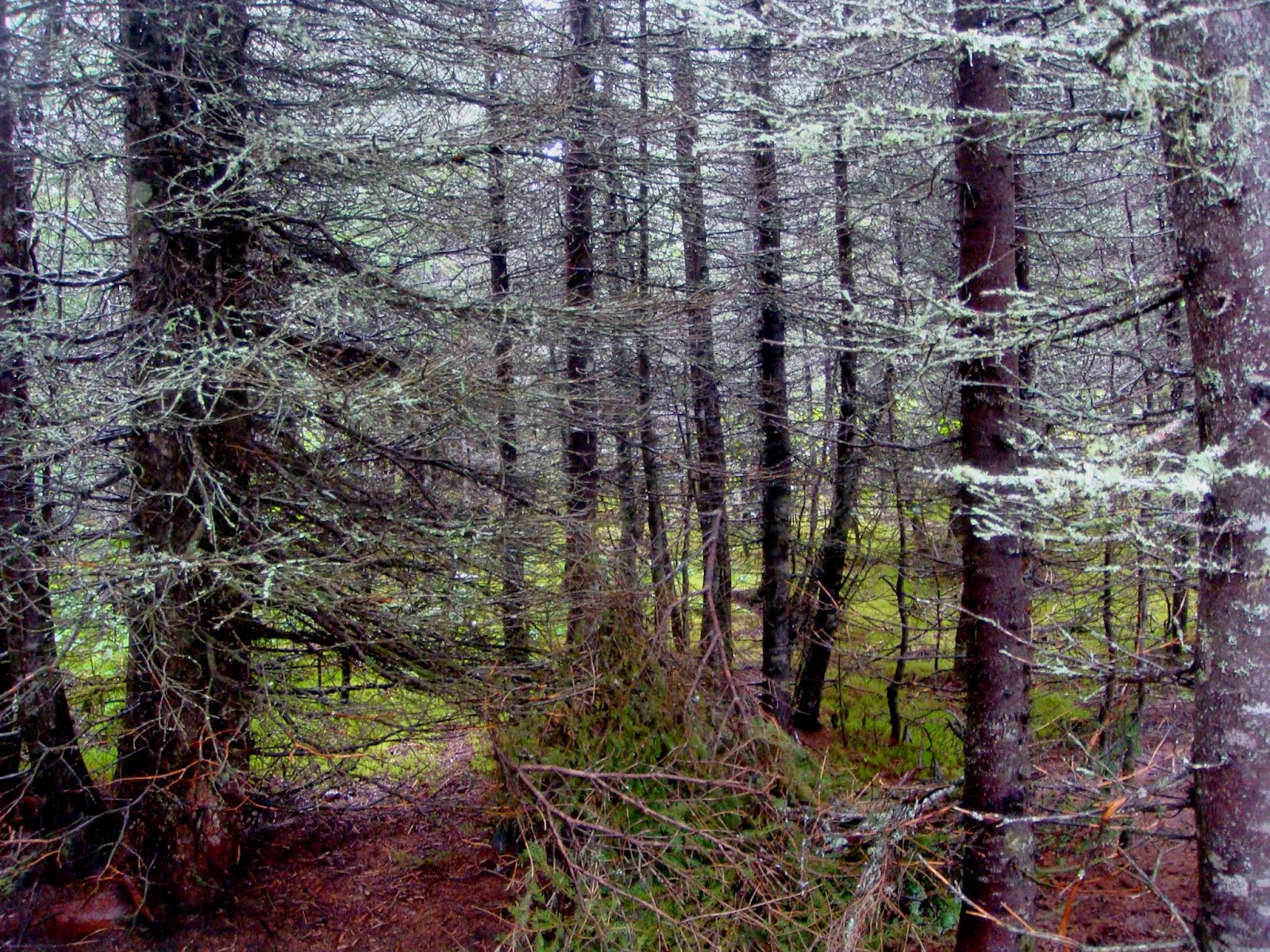 We walk inside the trees and the underwood, dodging the mud for about one hour.
In the meantime the fog has now got thin, the rain has become just a memory and the sun is starting to peek in the sky, making the mercury's column grow and making us tied on our waists all the layers of sweaters and jackets.

At one point we start to hear a far away and rolling croak.
The wood ends all of a sudden, and here there are: the gannets. 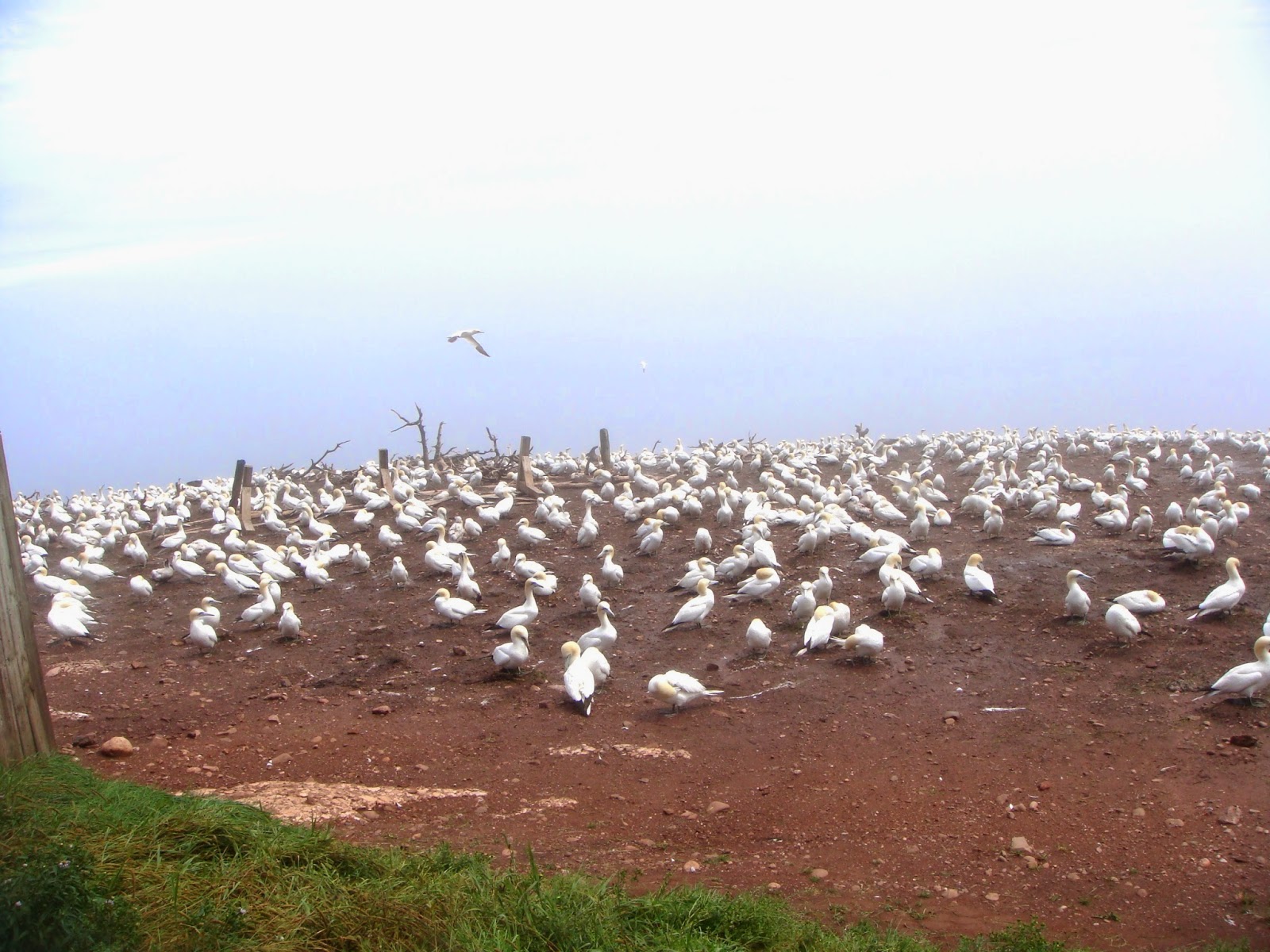 Hundreds and hundreds of gannets.
All mashed in a same point, collected like a crowd at the market on the bald peak of the promontory.
Who knows what is aggregating them there, all together.

We get back to our walk. 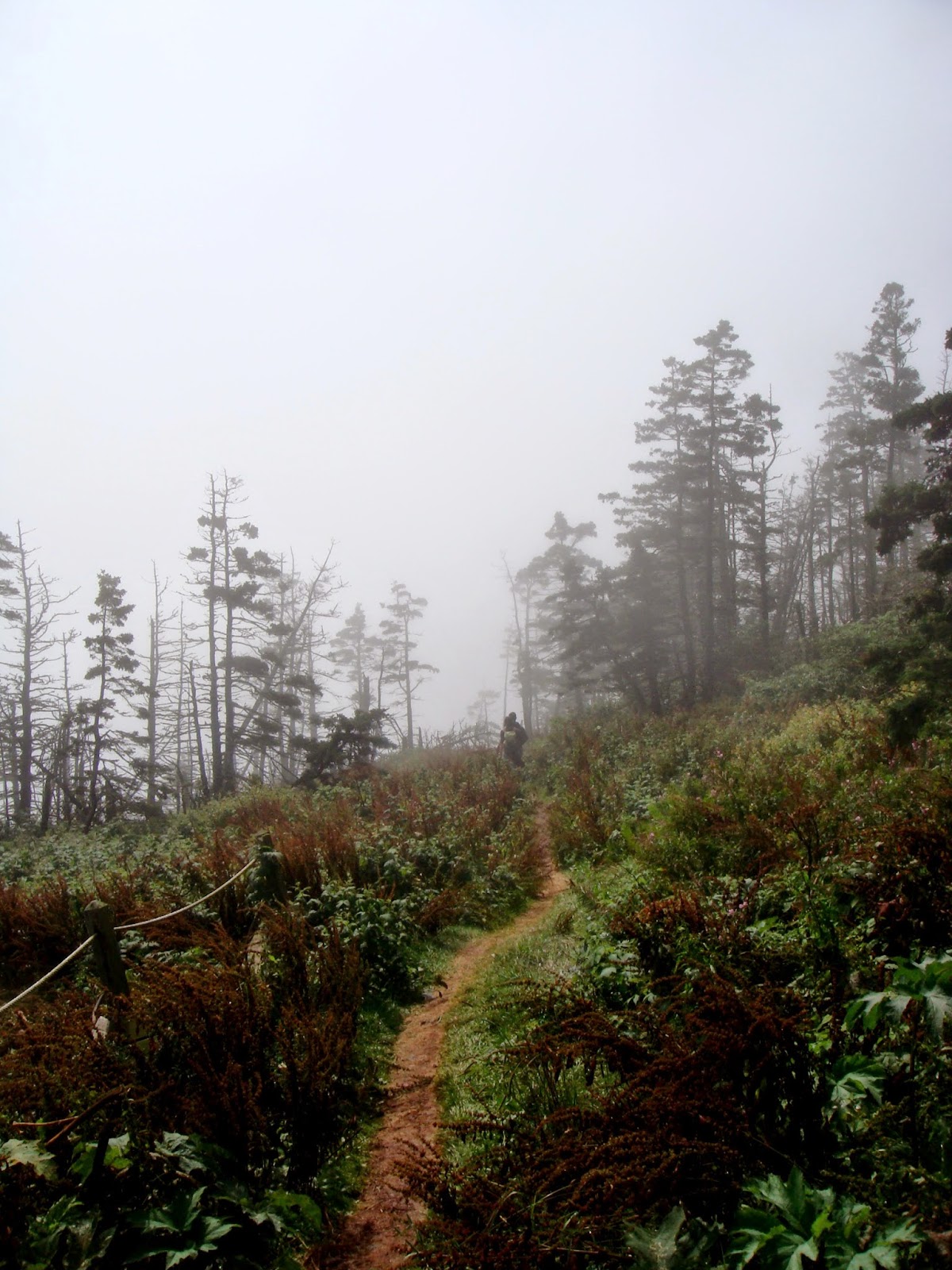 The Chemin du Roi at this point returns back, making anyway a longer and more charming path, along the coast of the island. 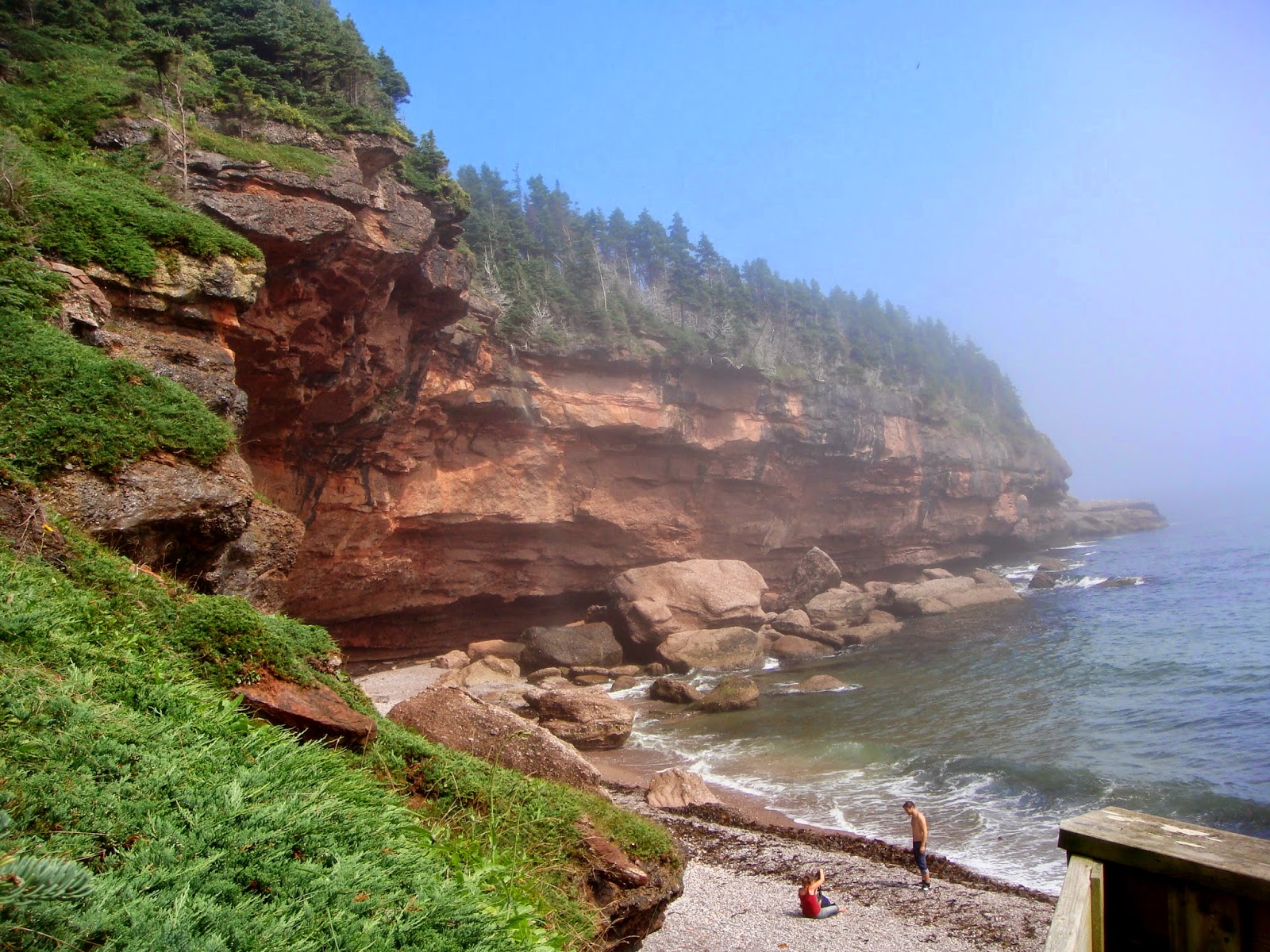 So we coast the rock sheer on the sea, which hides every now and then, below us, some secret beach, some waterfall in which we'd love to dive, since the sun has already rised the temperatures quite a lot. 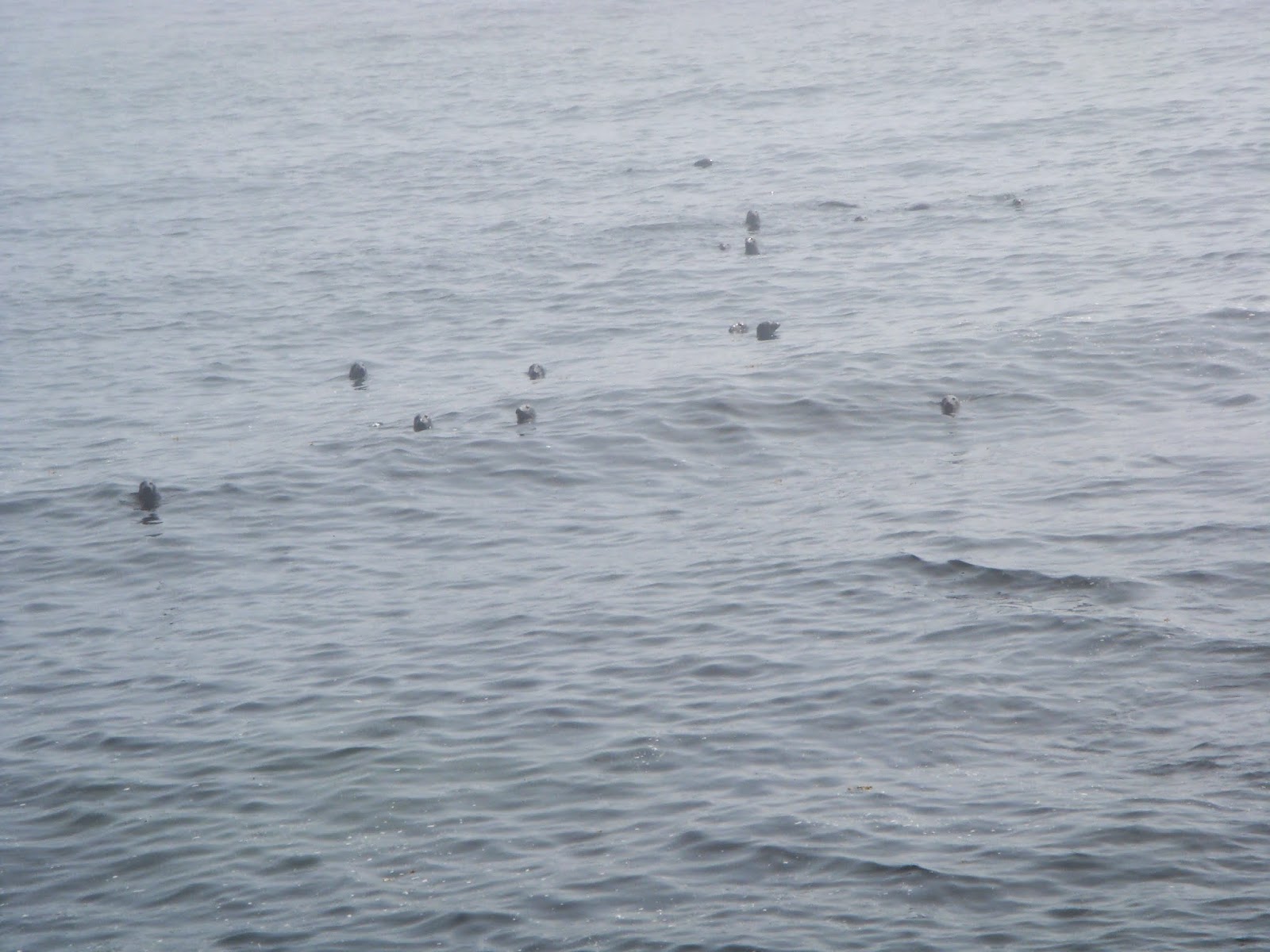 We even spot a small herd of seals, like grey buoys floating over the sea. 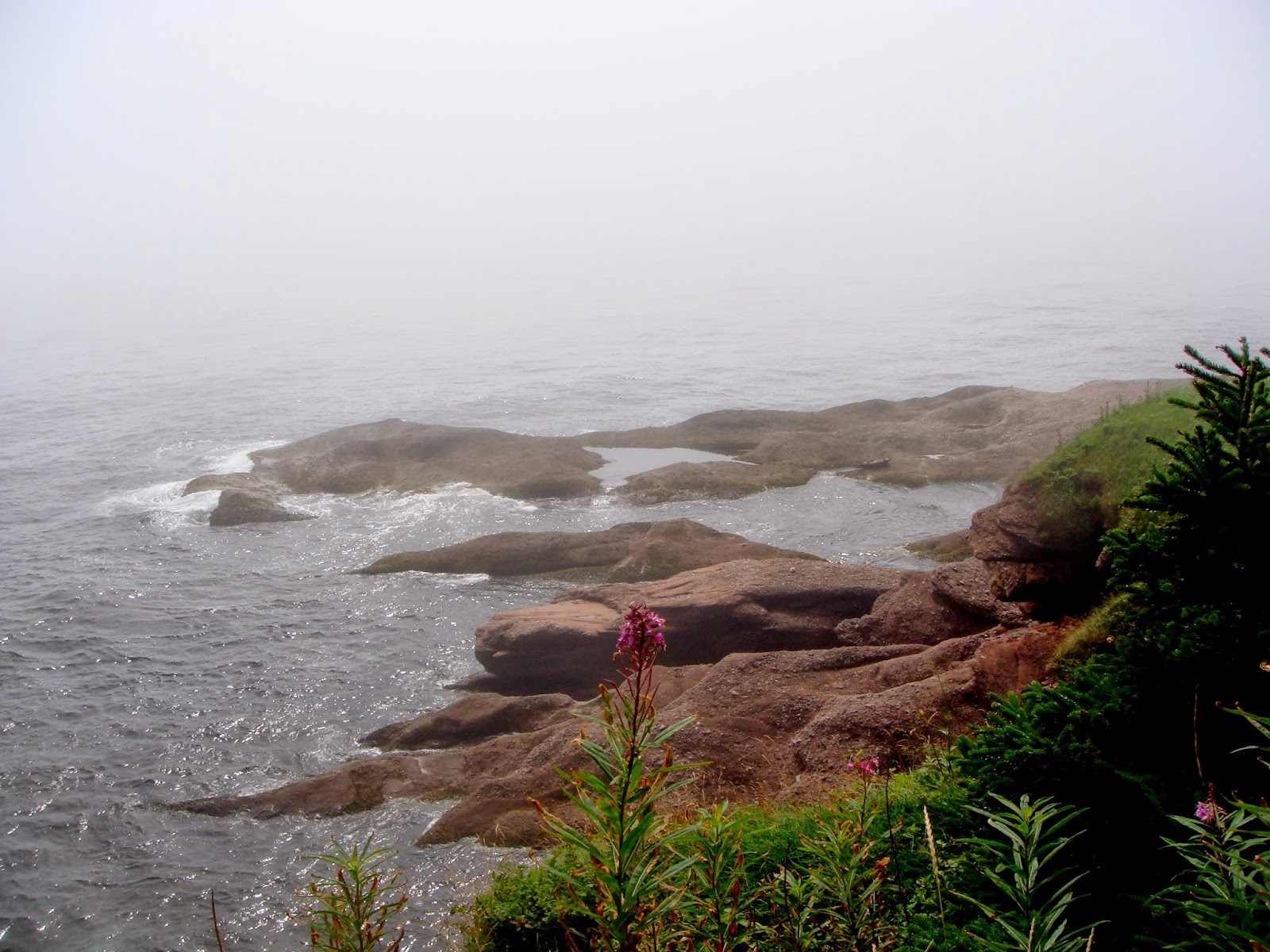 Even in the stretches where it returns back in the deep of the wood you can always expect the sea to pop out all of a sudden in the middle of the thick branches.

And then the wood ends, the path goes on in the middle of the fields, where here and there you can find the wooden houses which used to be inhabited, surrounded by the violet pink of the flowers. 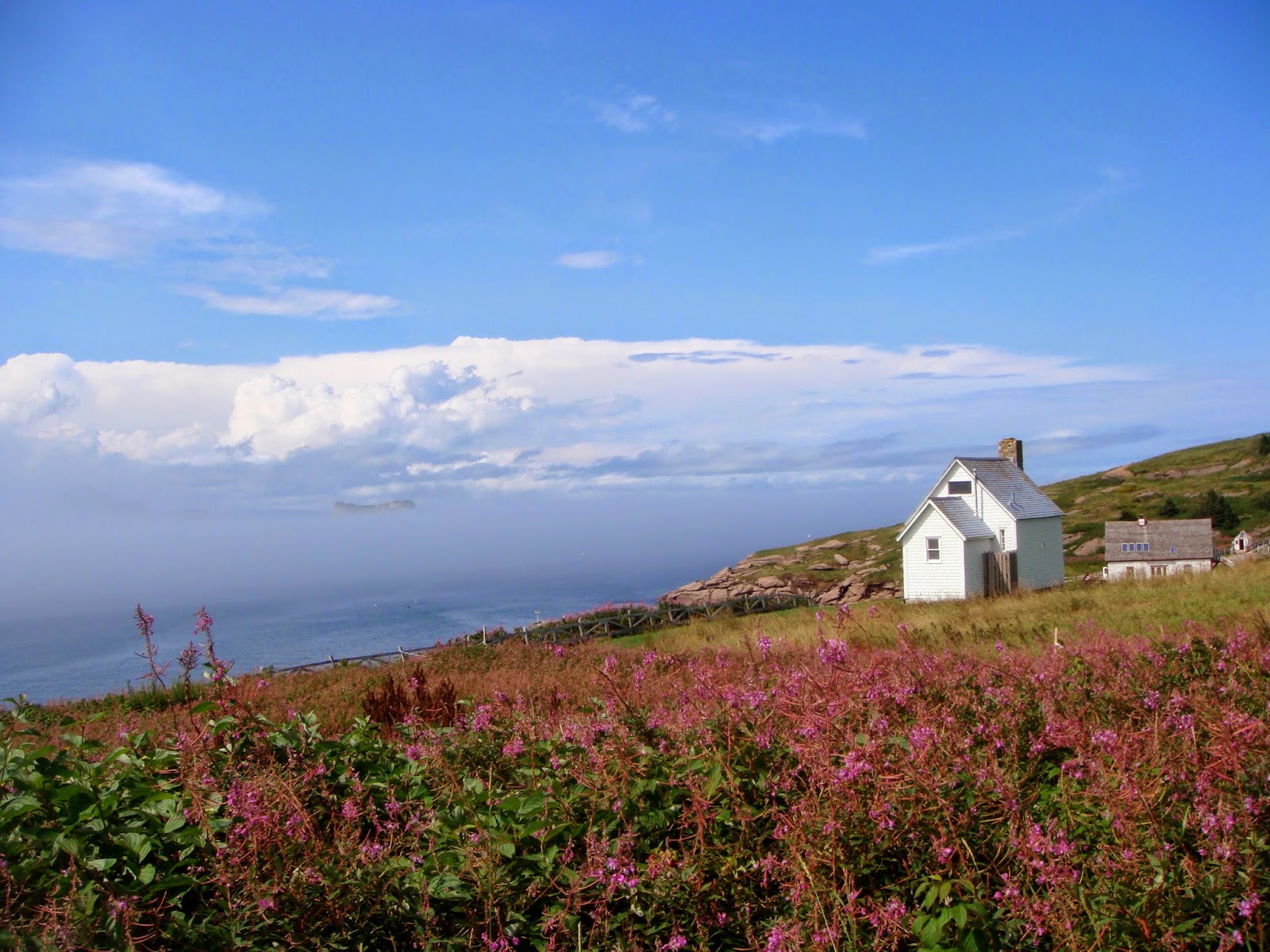 The sky is already shining blue and the only remain of the fog is a very thin white perforated veil which wraps the feet of the Rocher Percé in the distance. 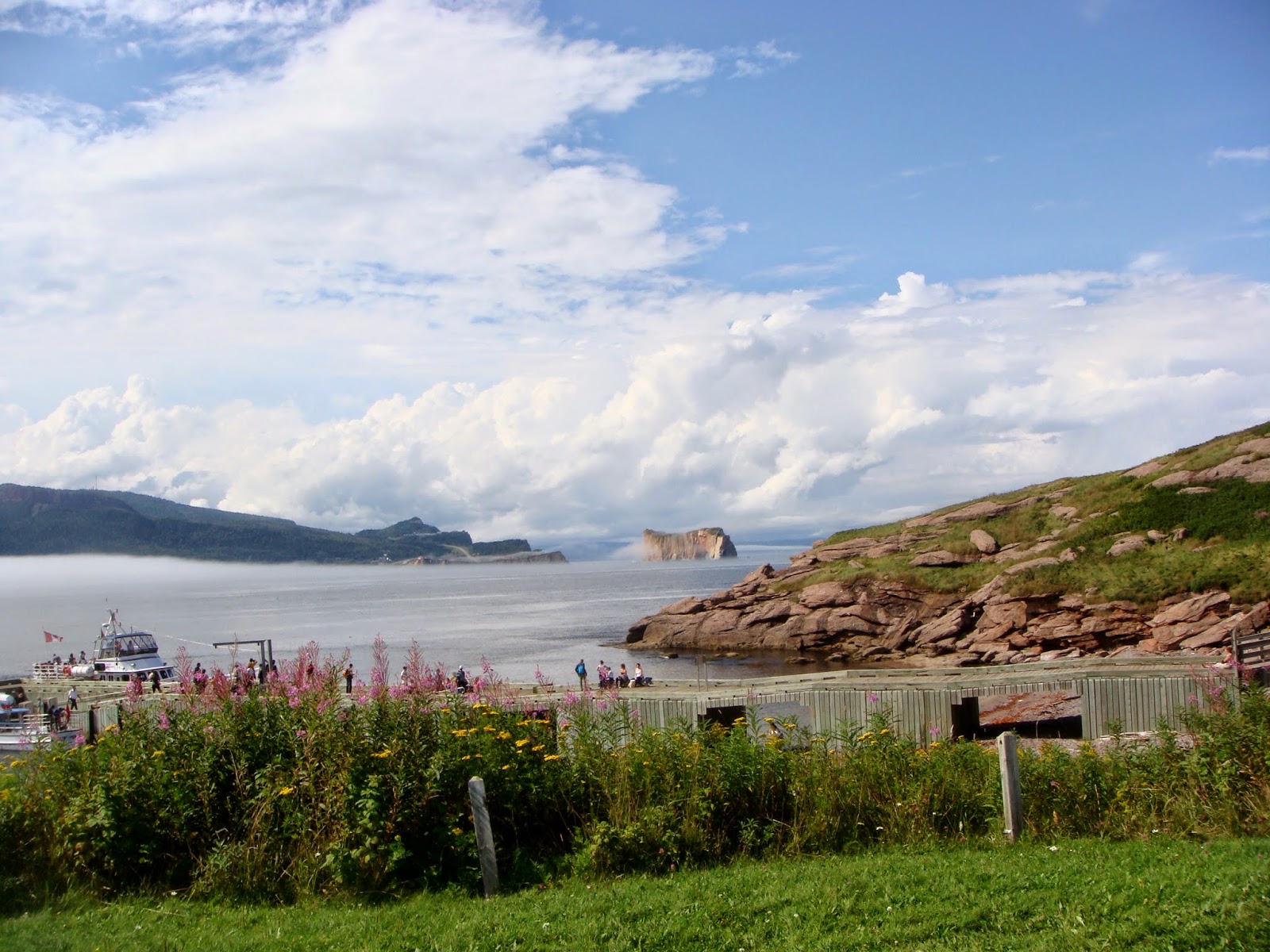 We have come back to the starting point, but the contrast with the landscape we have got to know this morning is striking: the island has throw away its mist veil and now it's smiling to us - white and creamy clouds shade the sky's blue and the sea sparkles. 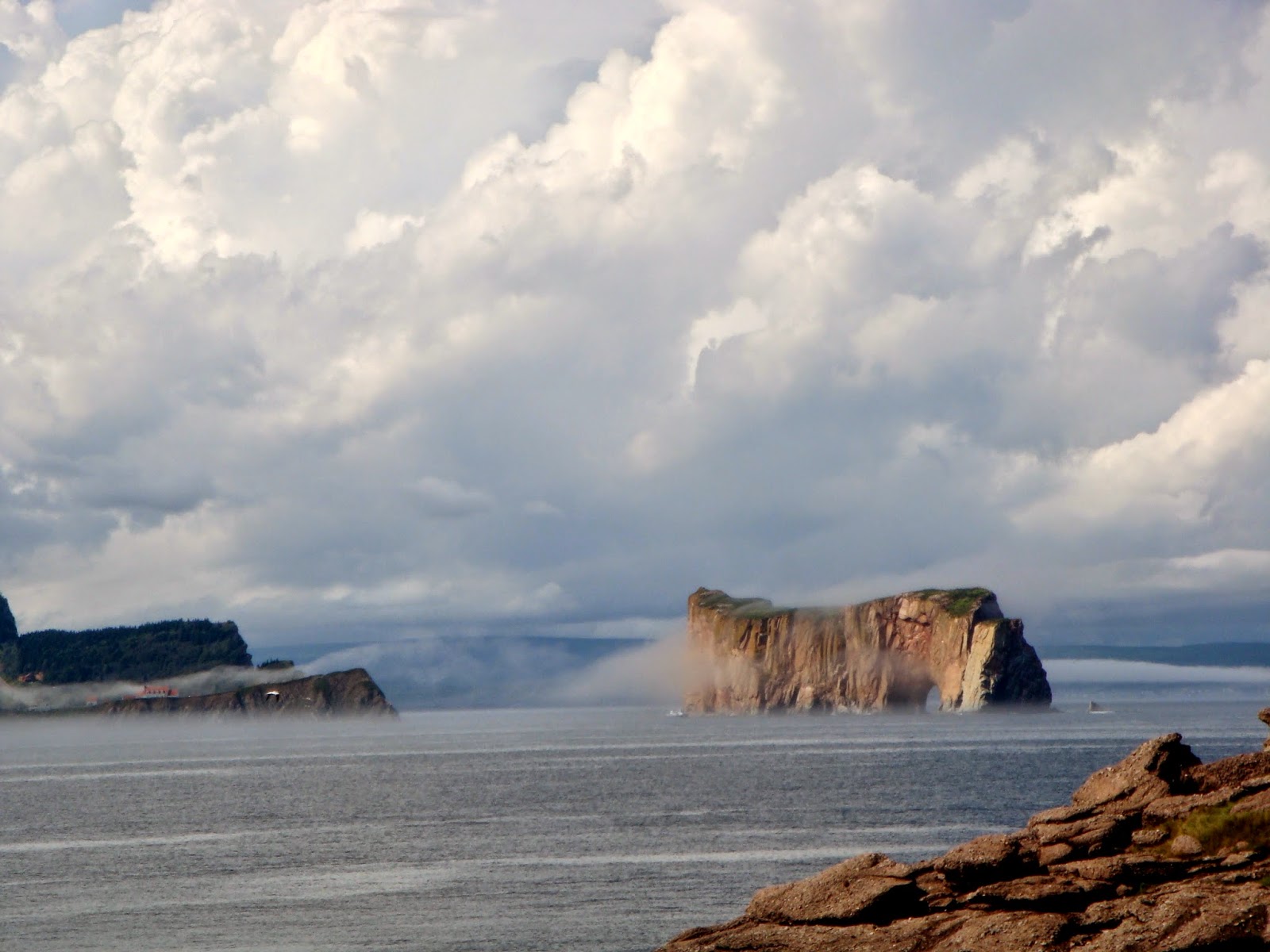 It's a bit as if Bonaventure had initially shown us a bit of slightly pouting shyness when we've arrived, when it didn't know us yet.
Now it has decided it likes us and so, before greeting us, it gives us one of its best smiles.
And, as it always happens for the most sincere smiles, it is so beautiful that it brights its face... 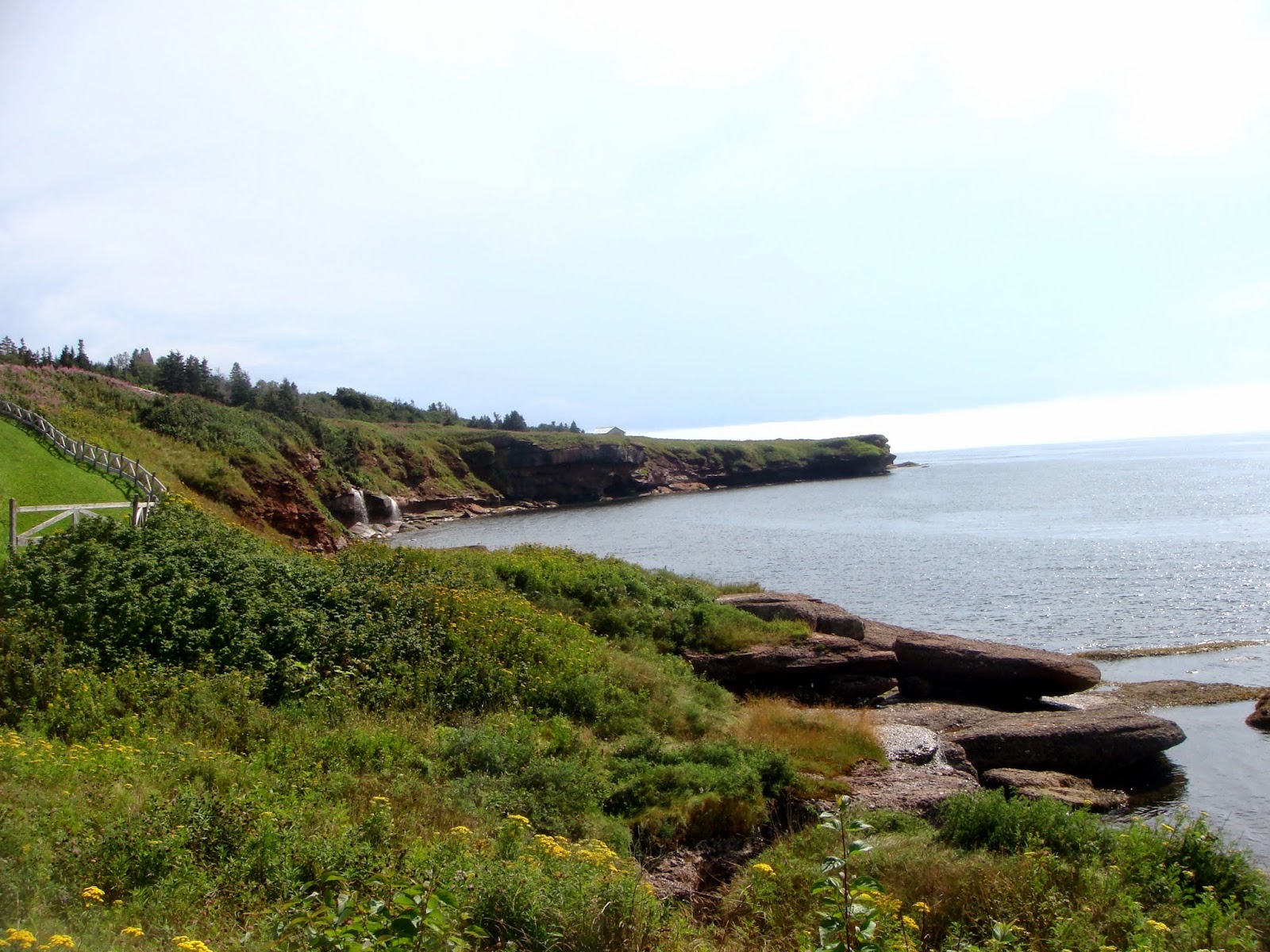