A day in London with Ginger Cat - and so the adventure starts...

Every story has its own incipit, every travel has its own start, every adventure has a beginning - and Ginger Cat & me usually like to start ours with London.
A bit because we are obliged (since both Turin and Genoa have direct flight connections to the UK only on its capital), but mostly because we love this city, all our British trips, which for us sound more like an homecoming rather than an holiday, start and end in the Eternal London.
This latest travel, for what concerns me, has been preceded by a very hectic week, made of anxious rushes and evenings when headache was transforming me into a lethargy animal - so I haven't even got too much aware of time passing, and, when I went to the airport, I still wasn't able to realize nor to be on vacation, nor to be about to leave for my most beloved country.
It's only been when the plane started to lower, when the landscape below us started becoming more neat and recognizable that the awareness has spread in my heart like a big smile.
The patchwork of green shades of the countryside is a pattern that any airplane journey can allow you to witness; but as soon as you begin to discern the dry stone walls, the white trellis houses, the cars running in the opposite direction from the one you would expect, you understand you're arrived in England.
The plane goes lower and lower, the edges of the landscape become more and more neat and detailed: you can tell the cars' model, you can spot sheeps in the meadows, you can read the pubs' signs.
And, in a rather abrupt way, we are already on the runway of Stansted airport: fleets of Ryanair airplanes parked all around, just a couple of orange Easyjet intruders.
In a corner, just like a museum's finds, old WW2 Royal Air Force bombers - those that my grandmother used to call roiailérfur, because she didn't know a word of English but she knew them pretty well, when they were flying over Italy to seed death. The arrival of the roiailérfur was a sort of nightmare that she was trying to exorcize by crippling their name in such a funny way, which has then stayed in her everyday talk: when my gran used to call someone roiailérfur, it wasn't exactly a compliment for him.

Through the years Ginger & me have learnt to become more and more minimal travellers, and to compact all our needings in just a carry-on bag, even for a 12-days trip like this one; so, after having got over the passport checks, we have been able to go straight to the Stansted Express, heading towards the London station of Liverpool Street.
On the train we bite the sandwiches we've bought for lunch - and this is our rite of homecoming in the UK: the ode to the British sandwich. 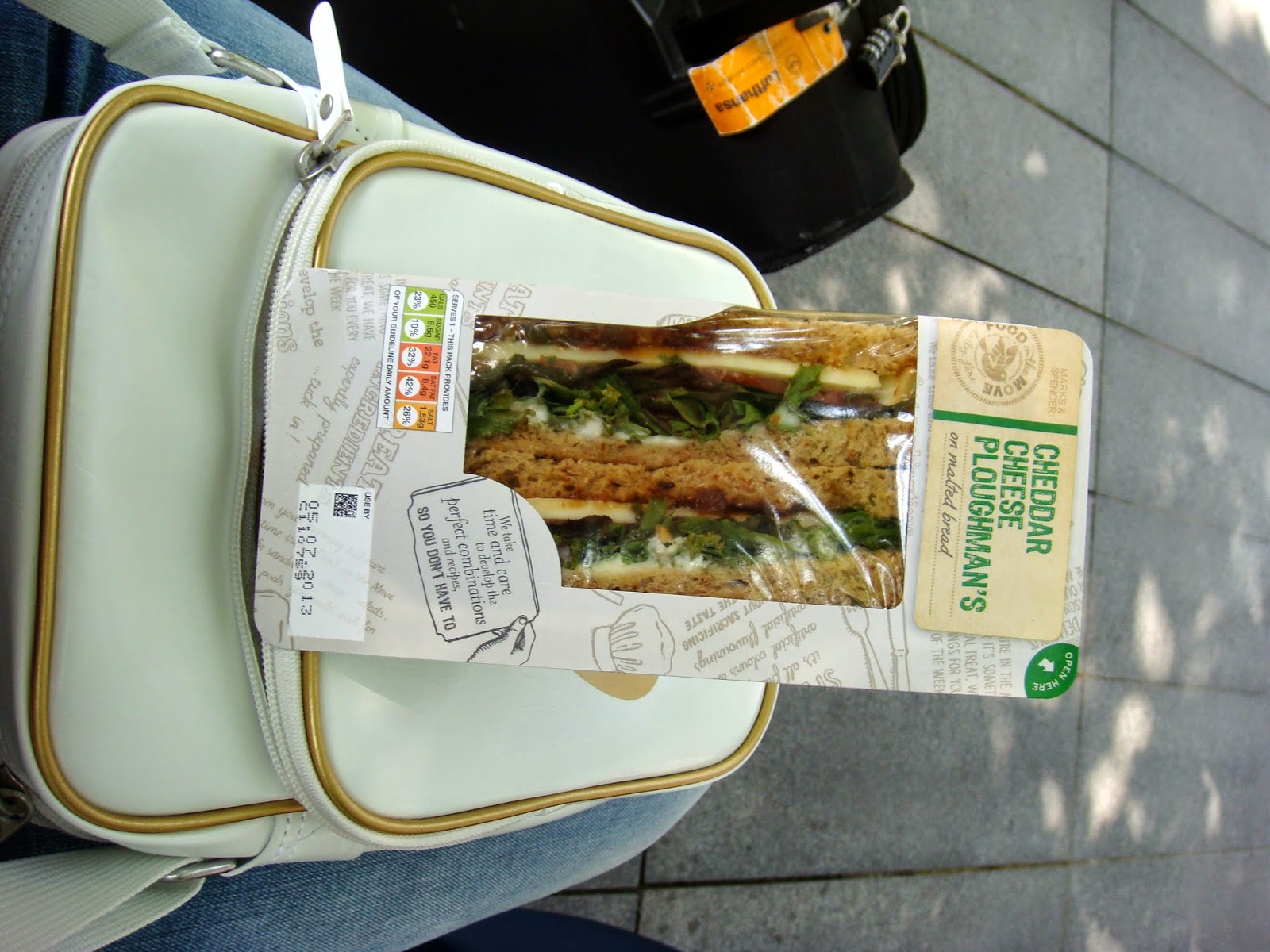 One day I will have to write it - but, as for now, it will be keep on being composed only by our random exclamations of pleasure done with a full mouth.
What different and delicious fillings they have. What a soft and tasty bread. And the sauces... they don't have just the obtuse mayo that we have, which we spread indistinctily on any kind of filling, in such a quantity that it kills any other flavour: no, the sauces they use in the British sandwiches are dosed and combined with masterly skill.
After all, Englad is the country that has invented them.
And I bow thankful to the Earl of Sandwich and to the supremacy of his country in the art of bread, going straight away to ransack hungry the shelves of the first Marks & Spencer that I will meet along my way.
A box of sandwiches is also the unmissable souvenir which I will always bring home when I come back: it's a way to savour a bit longer the goodbye to my beloved country and to fight the gloom of the return.
Oh...
Am I becoming too sentimental?
Well, also British sandwiches do have a flaw.
They always have cucumber, always.
And I loathe cucumber. Can't swallow it. Its taste irritates me, it poisons everything else.
And, hidden under the cheddar, put between a salad leaf and a chunk of chicken, dressed up with the yogurt sauce, you can always find three or four slices of the unbearable green veg.
But, after all, don't they say you need a flaw, in order to be perfect??

And so we are in London.
If at first I wasn't even realizing it yet, now I have the sensation of never having gone away - and Italy seems so far away, it doesn't seem to belong me anymore.
Does it ever happen to you to find it difficult to descrive beautiful things? I mean, the most absolutely beautiful ones?
I do have this sensation with London. 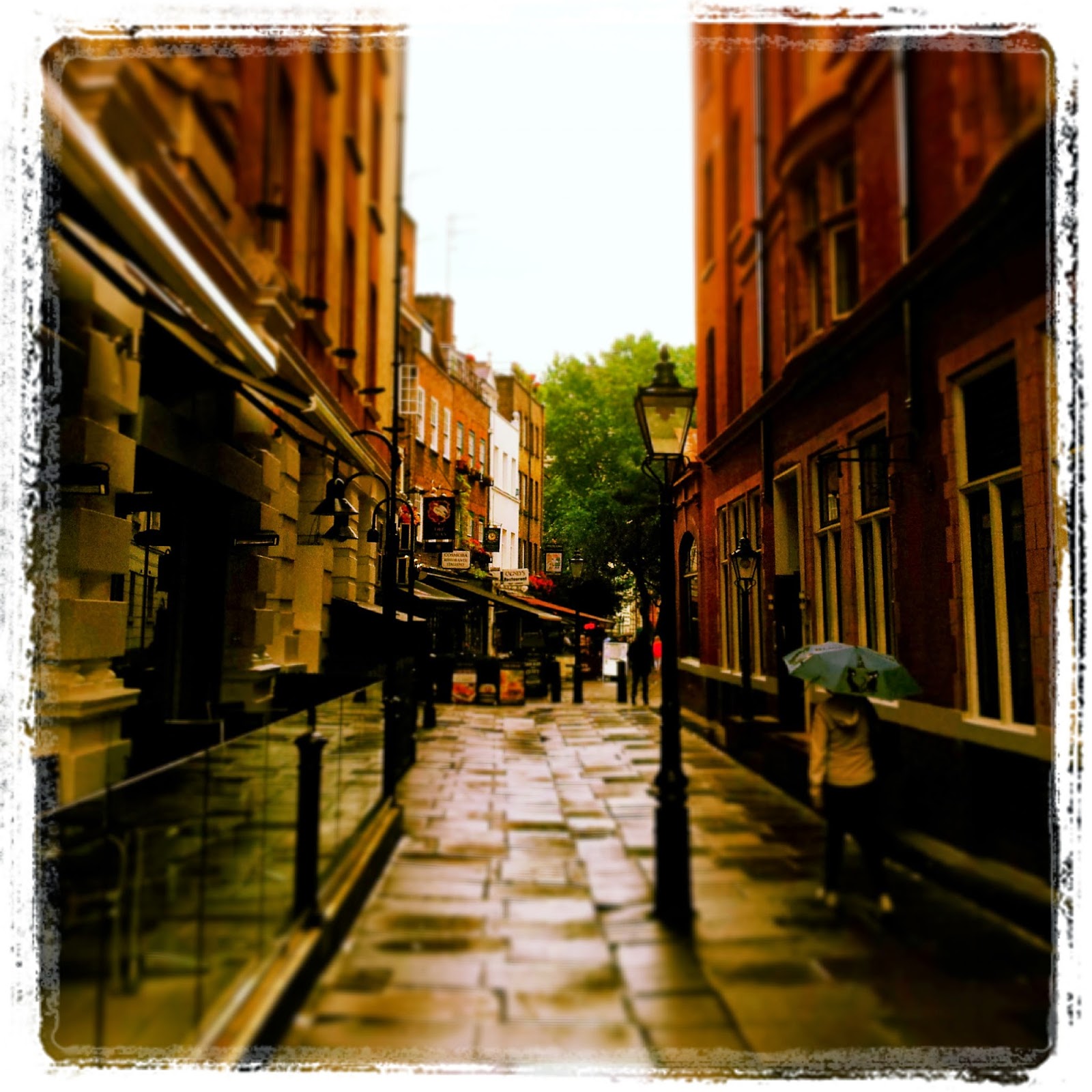 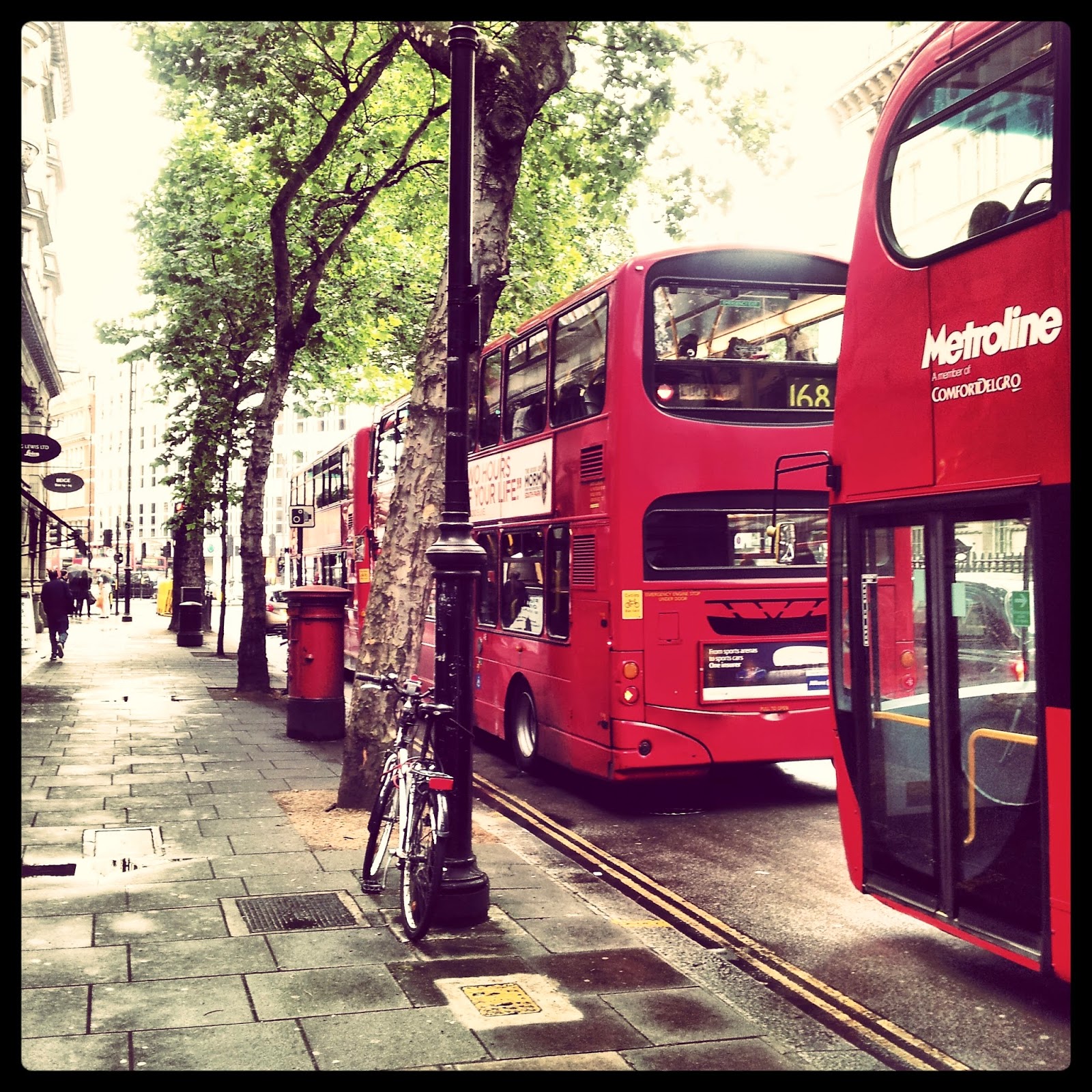 The more I try to stop and to understand it, to explain it between myself and me, the more I feel like I don't know it at all, actually.
Maybe that's the core of its charme, the magnetism of its personality.
It happens unequivocally every time I meet it.
It's able to surprise me, to show me aspects of itself that for me are not only new, but also unexpected.
But there is always a fil rouge: London has so many faces, it's made of so many things, but these so many things can exist only in London, anywhere else in the world. They always have its own mark, the sign of its unequivocal personality, its fil rouge tying them up. 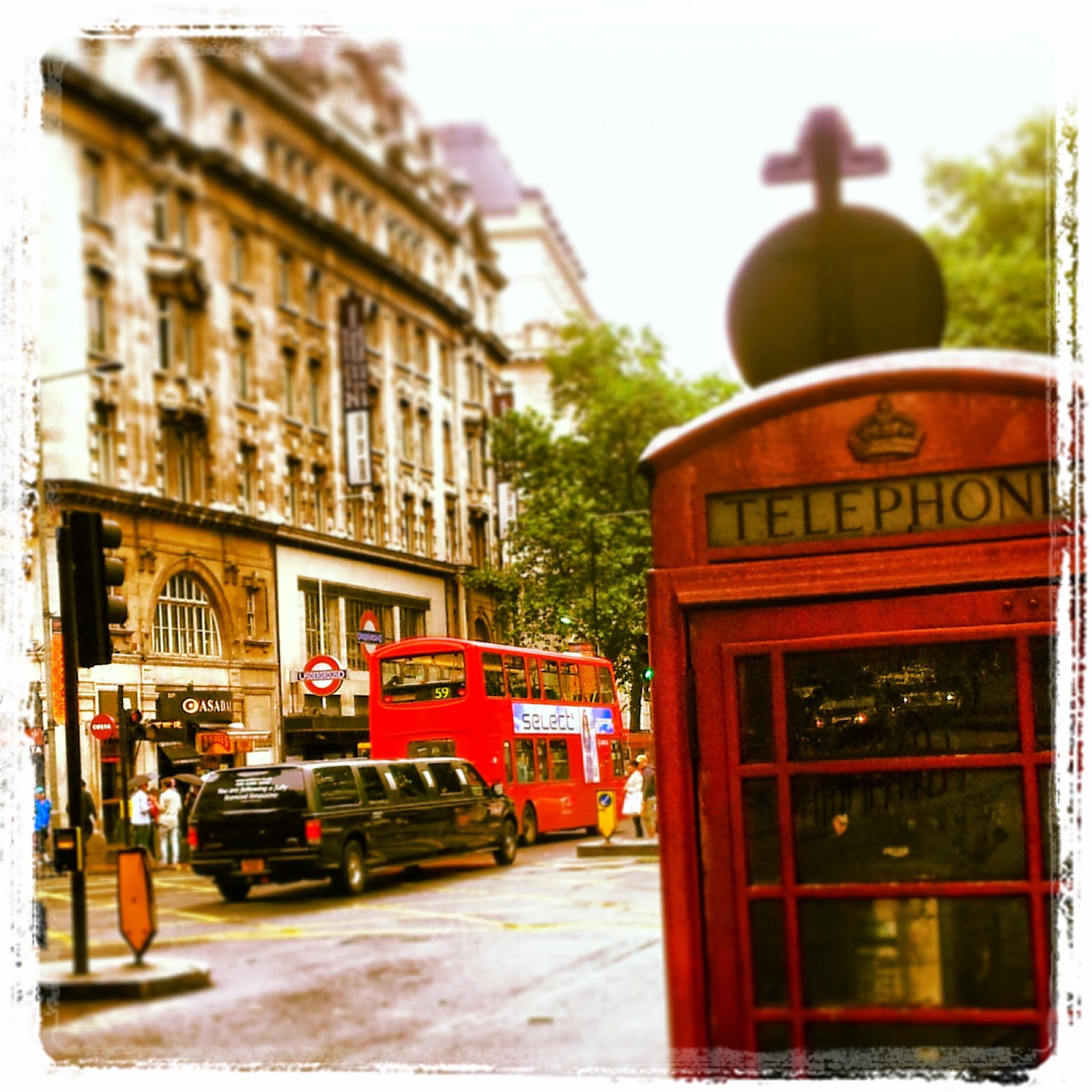 Maybe this is also the reason why my desire of coming back is always so strong: I want to discover the fil rouge, to find out what it's made of, going straight to its heart...

This time it's been a small pedestrian area around Pentonville Road. 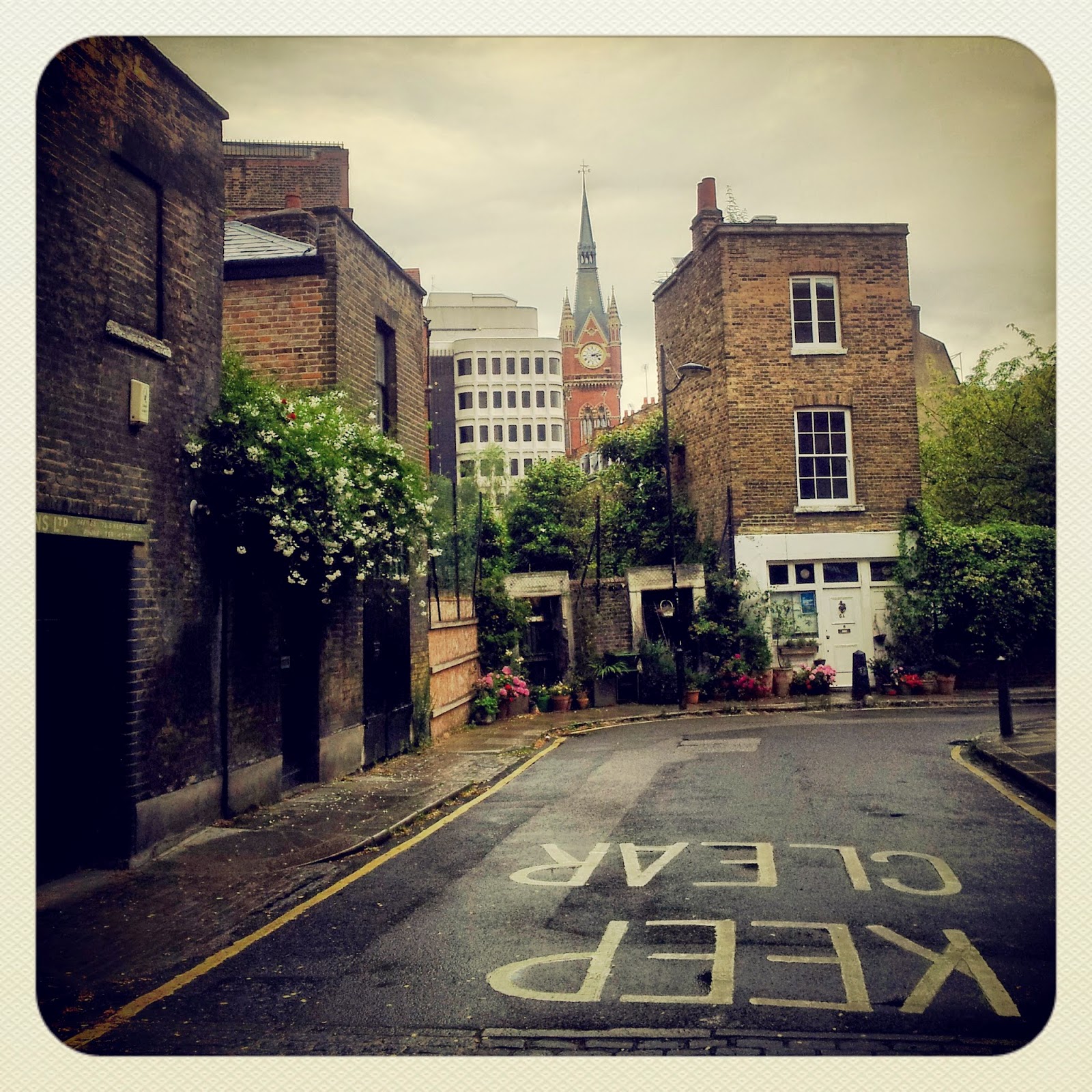 There were tall and severe Georgian buildings, which were surronding like walls silent courtyards made of their same orange bricks.
Here and there strange white graffitis which looked like mystical symbols.
Every now and then there was a tree popping out to enliven of green the orange of the bricks.
A thin and gloomy rain was falling, and the smoke grey sky looked like it was sighing. 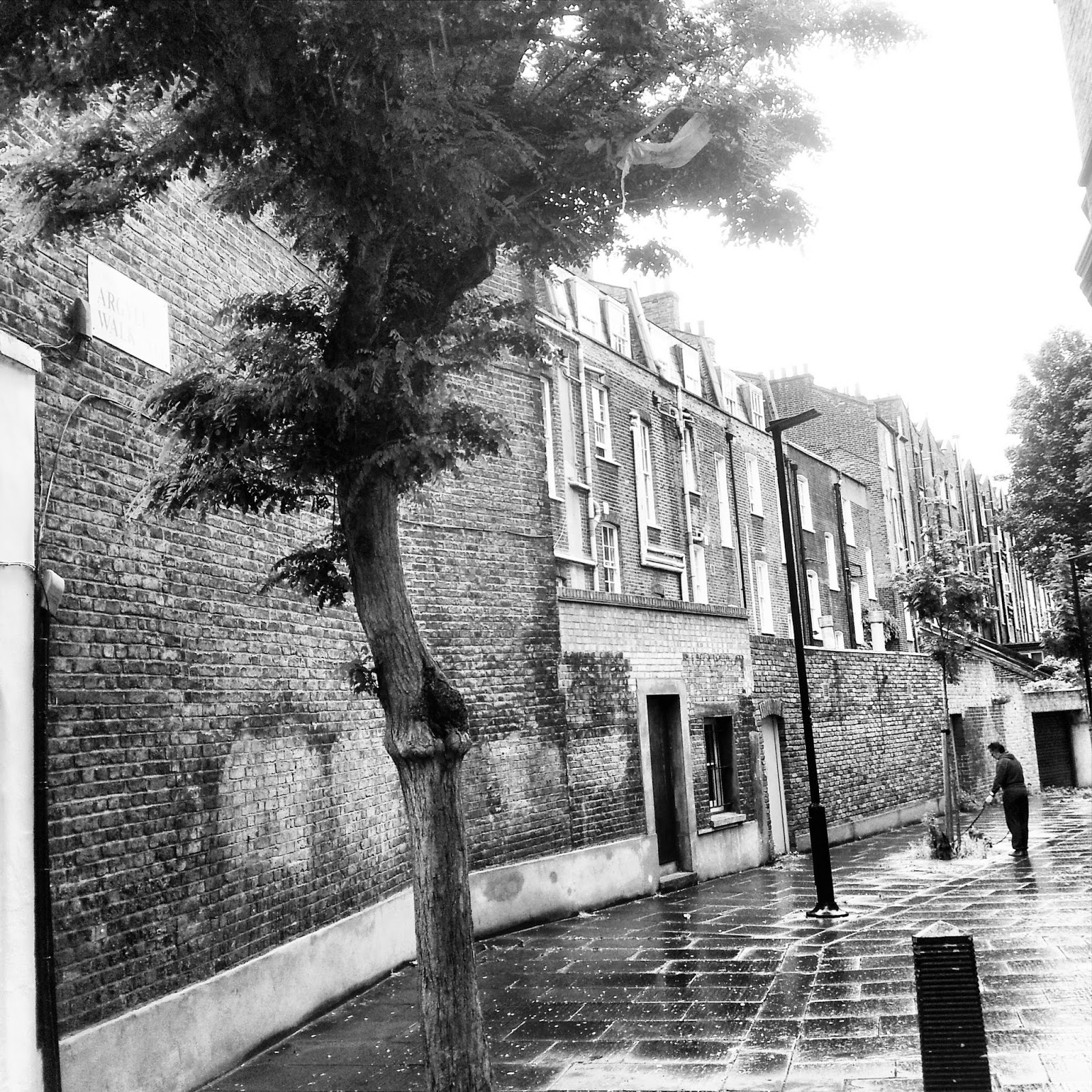 Maybe there isn't actually anything that magical in this corner, but while we were walking around it, holding our umbrellas and without snapping any pictures, I was almost feeling like stepping back in time, and that there something important might have happened, that between those walls as silent as a voluntary seclusion there might be many stories to be told...
And maybe also this Highland Coo who has come to London and has got lost exactly here, might have its own little story to tell. 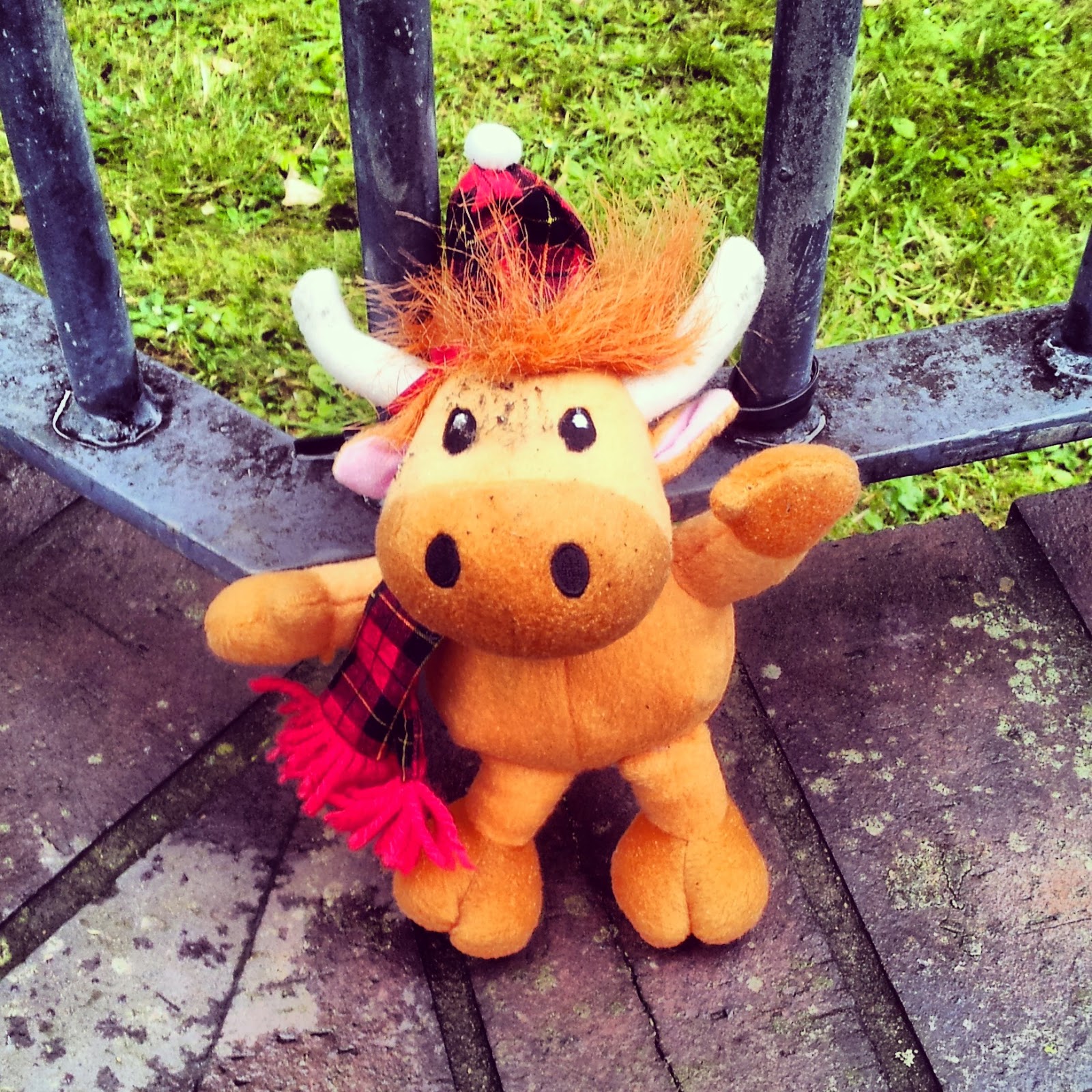 Two more steps and we find ourselves in Bloomsbury, with its old fashioned elegance, as in a postcard. 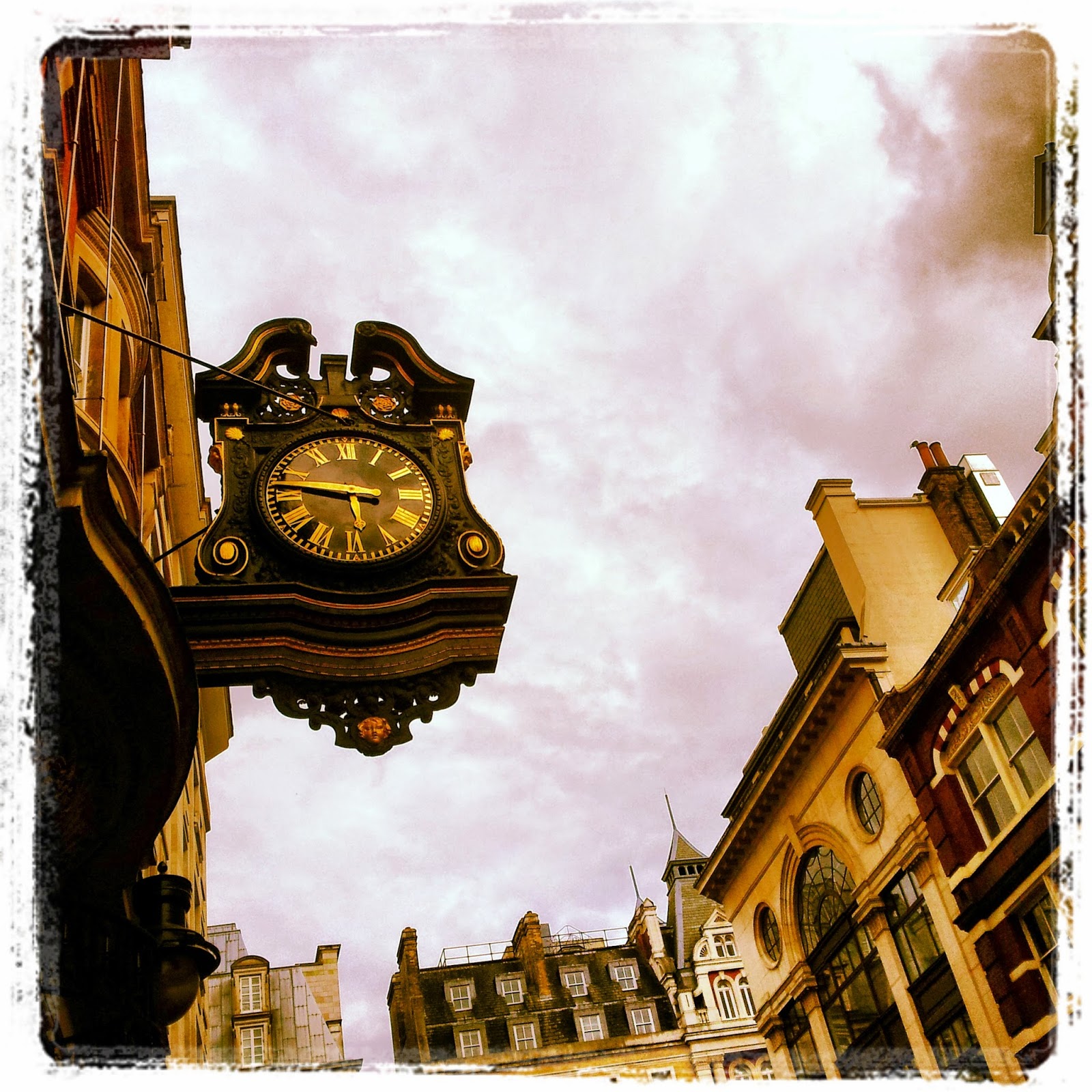 Bloomsbury is made of black and white Victorian buildings, sober but rich.
In middle of them, tiny precious parks, pretty and cured, very green, designed by some architect to match with the buildings.
Fountains, benches, gazebos and water's games.
Umbrellas and pidgeons. 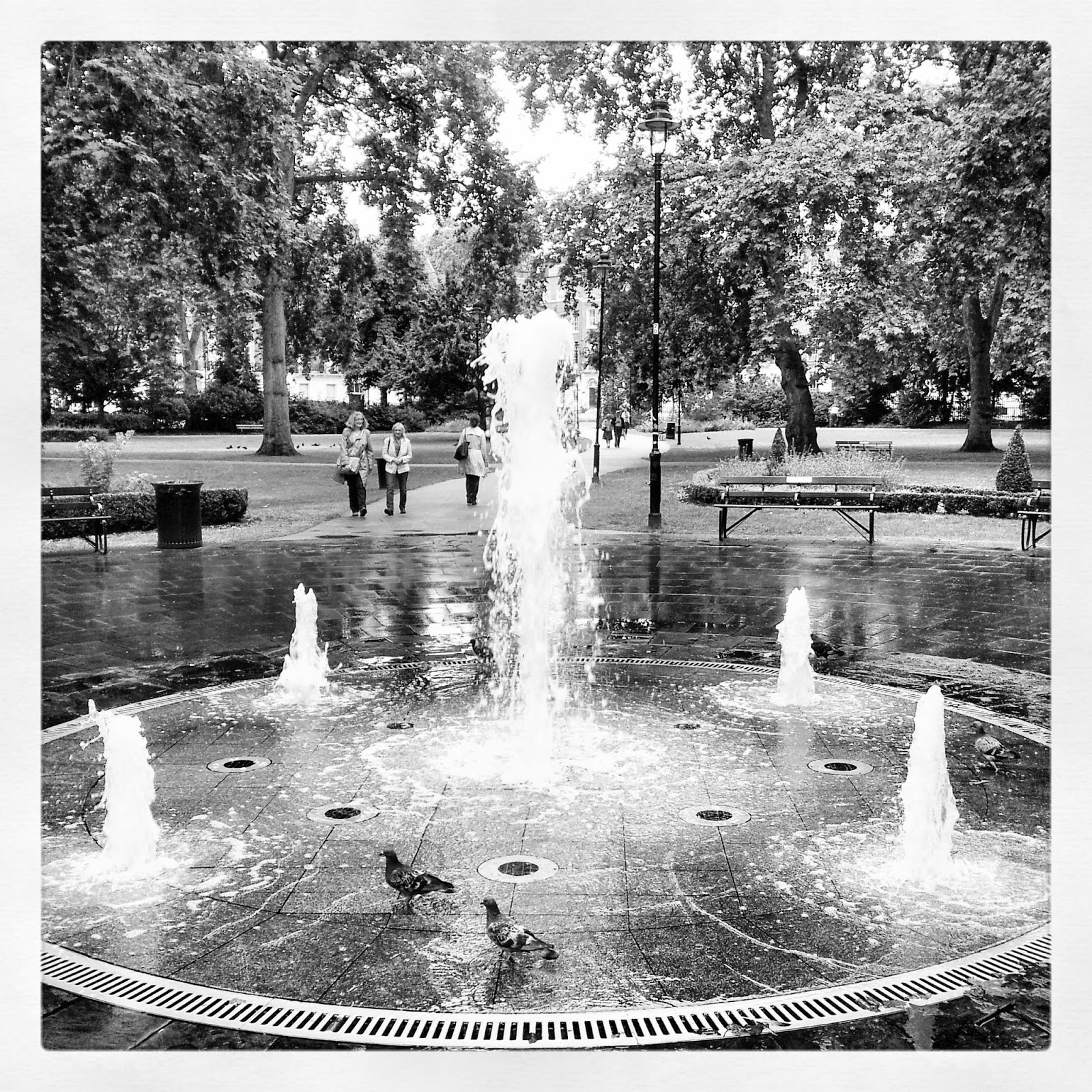 Patisserie Valérie is actually a chain, but it still feels like a "real" patisserie.
Its art deco logo immediately evokes old times atmospheres, and, even if the cafés are furnished in a rather minimal style, they are as hospitable as a d'antan tearoom with laces and copper. 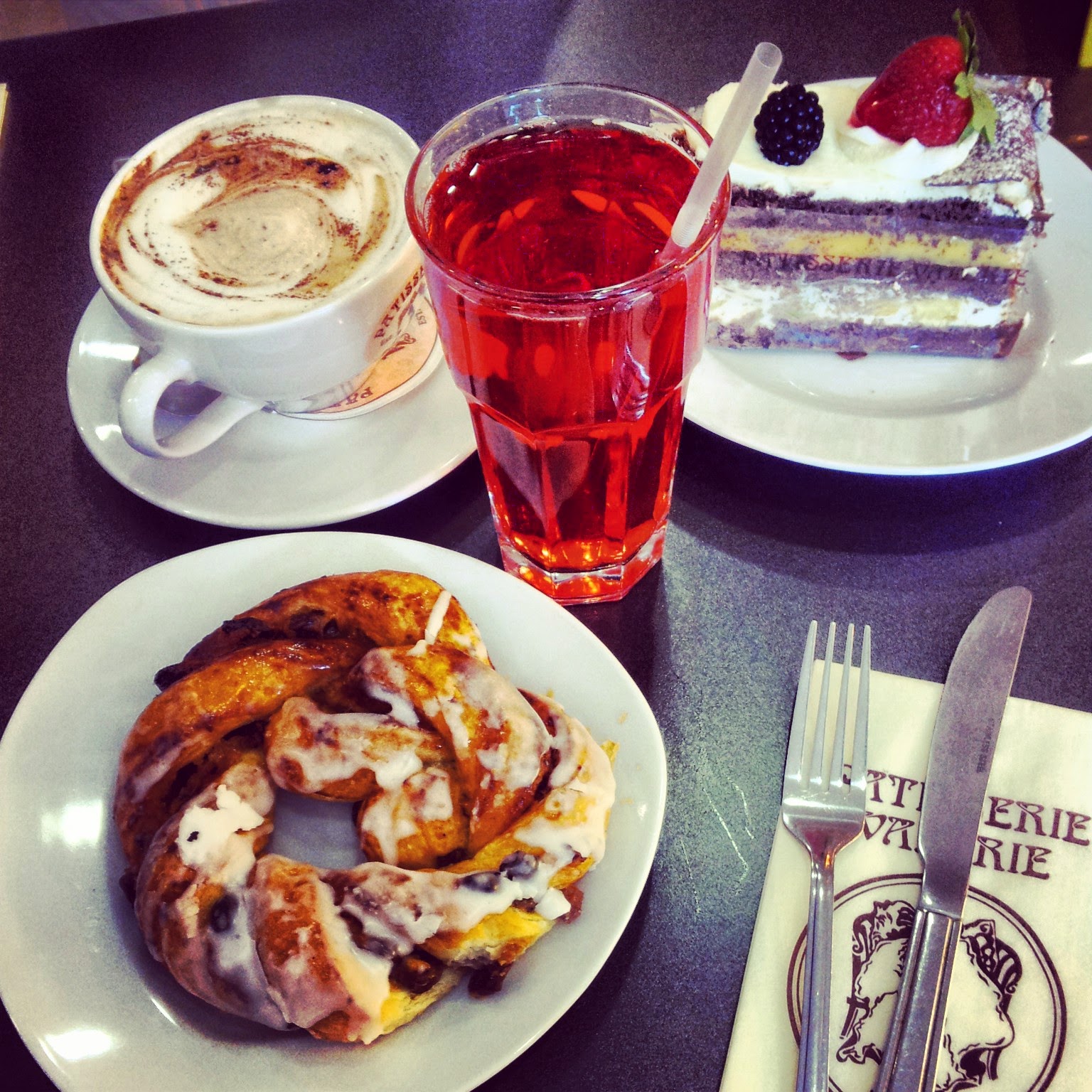 Two more steps and we are at Covent Garden. 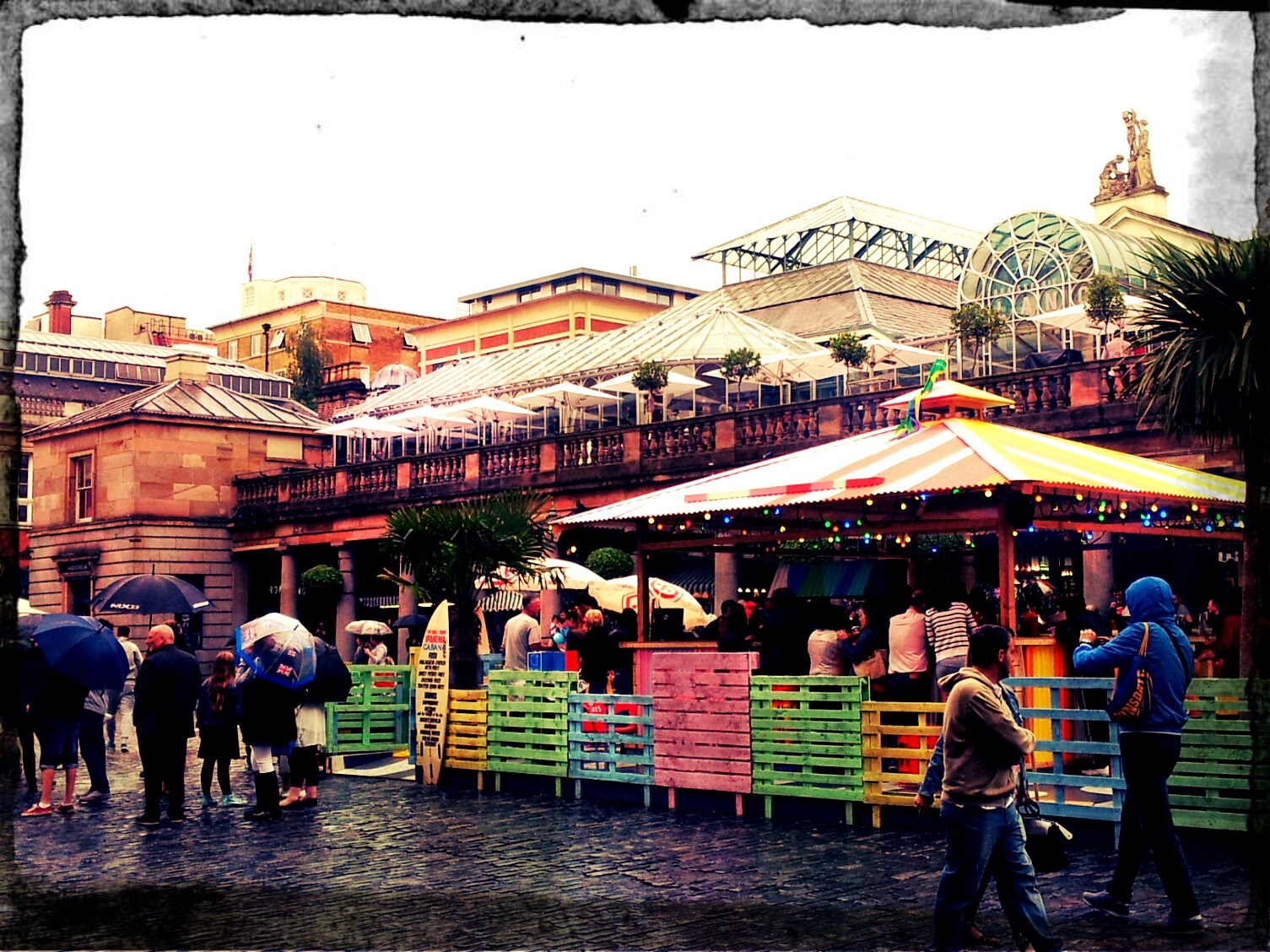 Covent Garden is one of my favourite place in London - not really for the shops or for the market; but simply for its colors, and for the people moving around them.
Covent Garden is one of my favourite places where staying observing people for hours: I don't know why - maybe because around its colours people look like actors on a stage, and who knows which role they will choose to play. 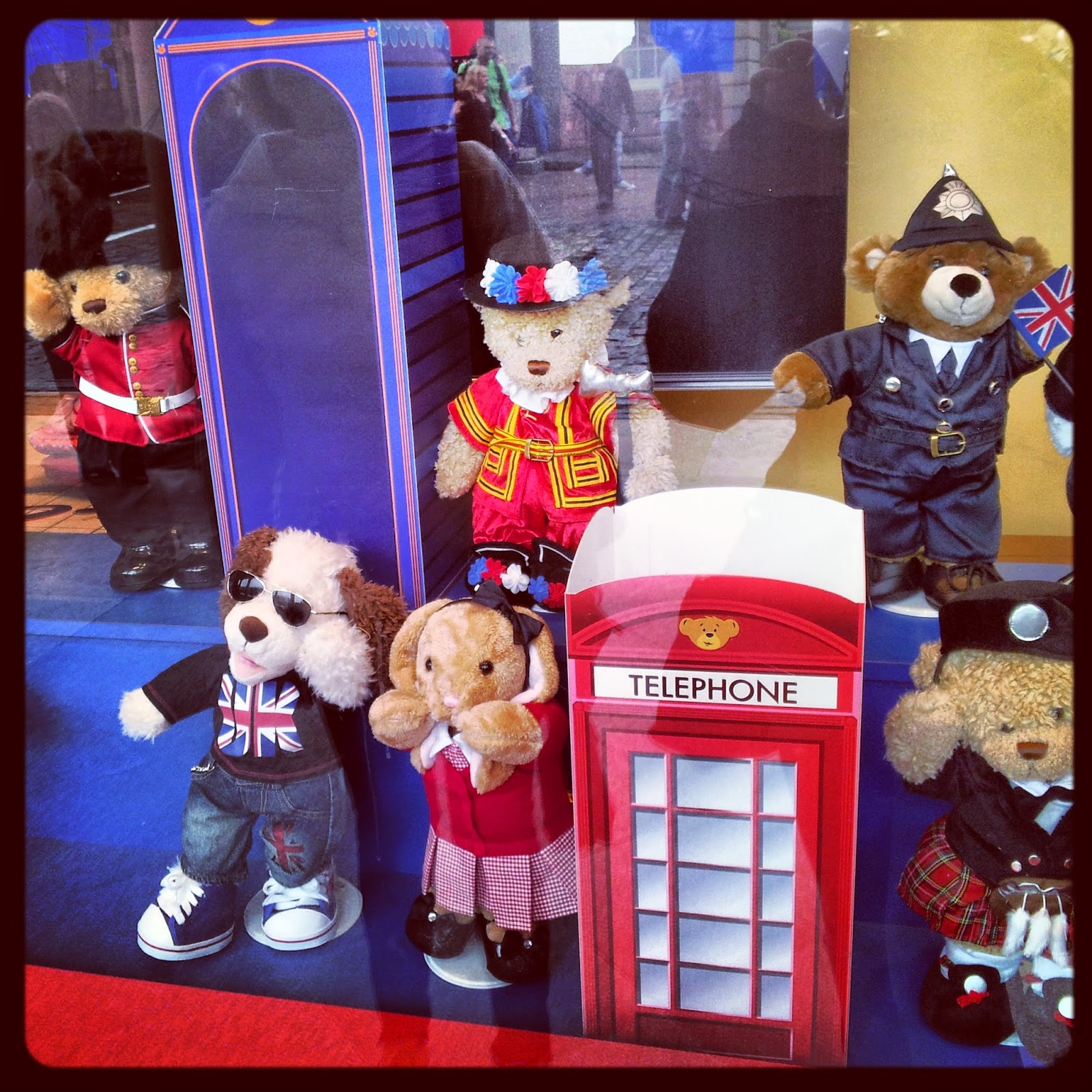 There is the Man with Big Balls who is still able to entertain children as a juggler; there is the craftman of ceramic dolls who tells you how each doll is unique and chooses by herself her own name and personality, according to how she gets out from the oven after the first bake.
It's still raining, but here it seems like there is a rainbow.

Now that we've reached the Embankment the rain has stopped. 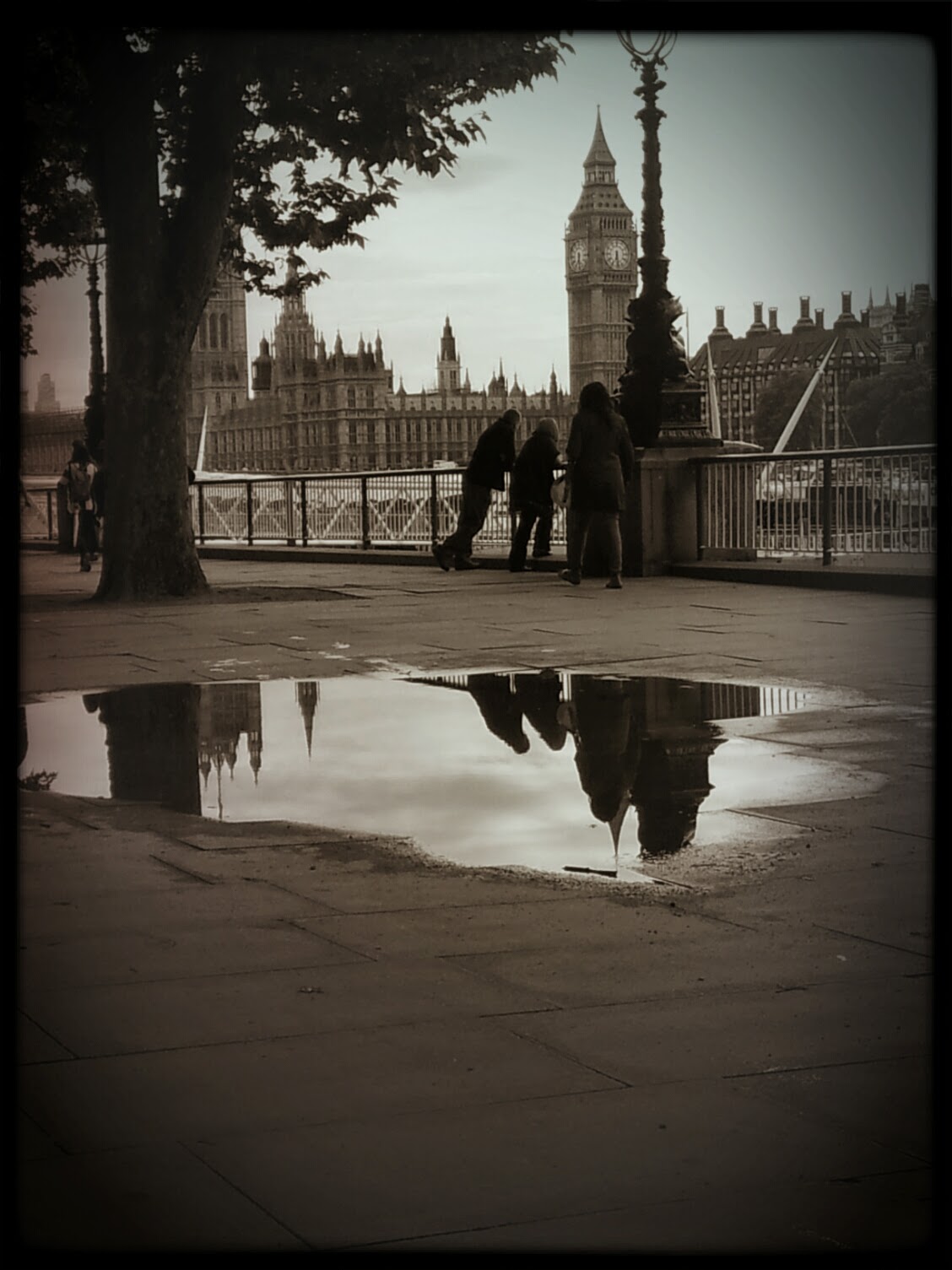 Big Ben & Houses of Parliament mirror themselves in the waterpools, which are as polished and silvery as crystal. 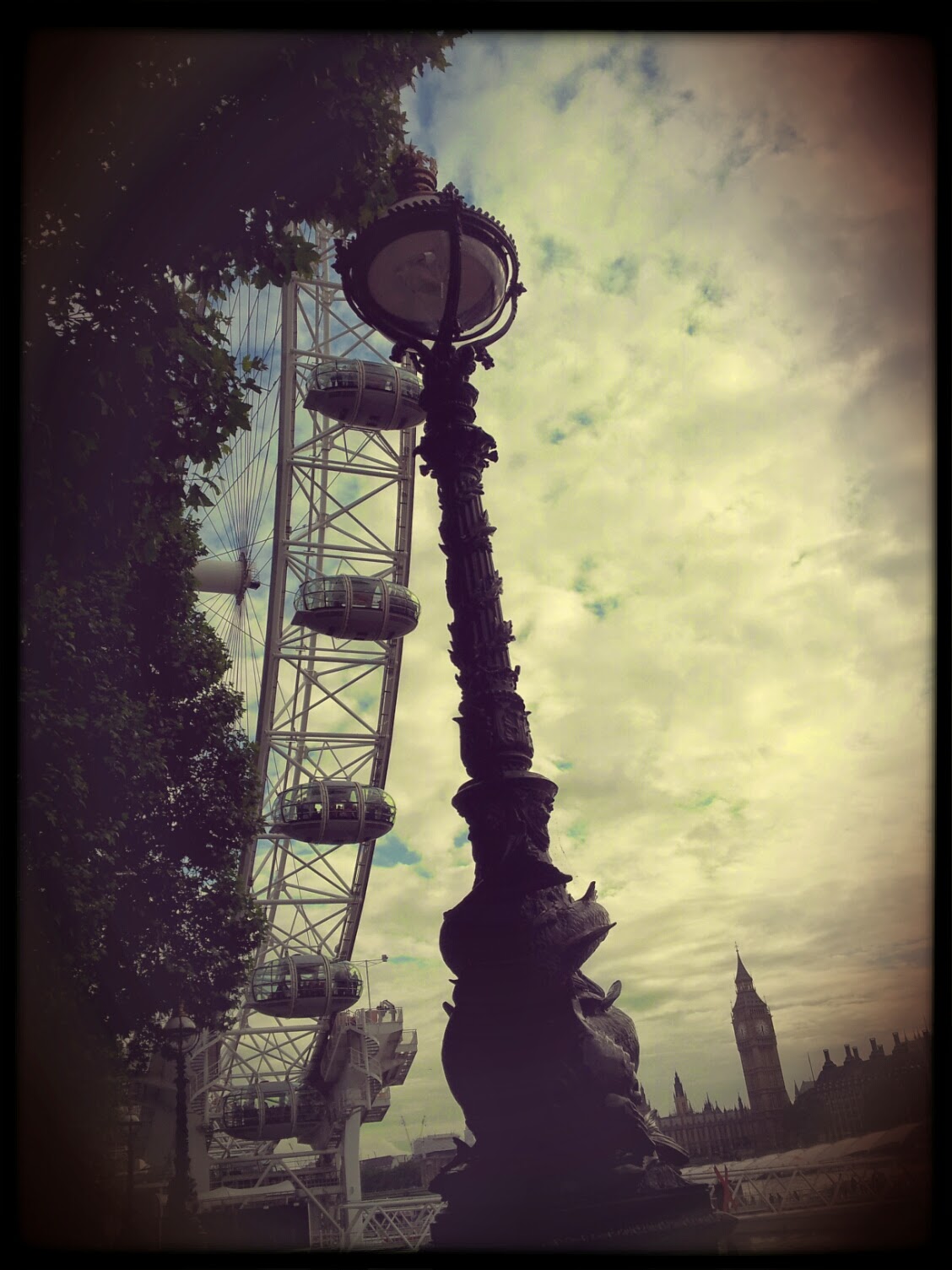 Also the London Eye checks its make up in an estemporary mirror of water, while it keeps on turning on - slowly, but without ever stopping. 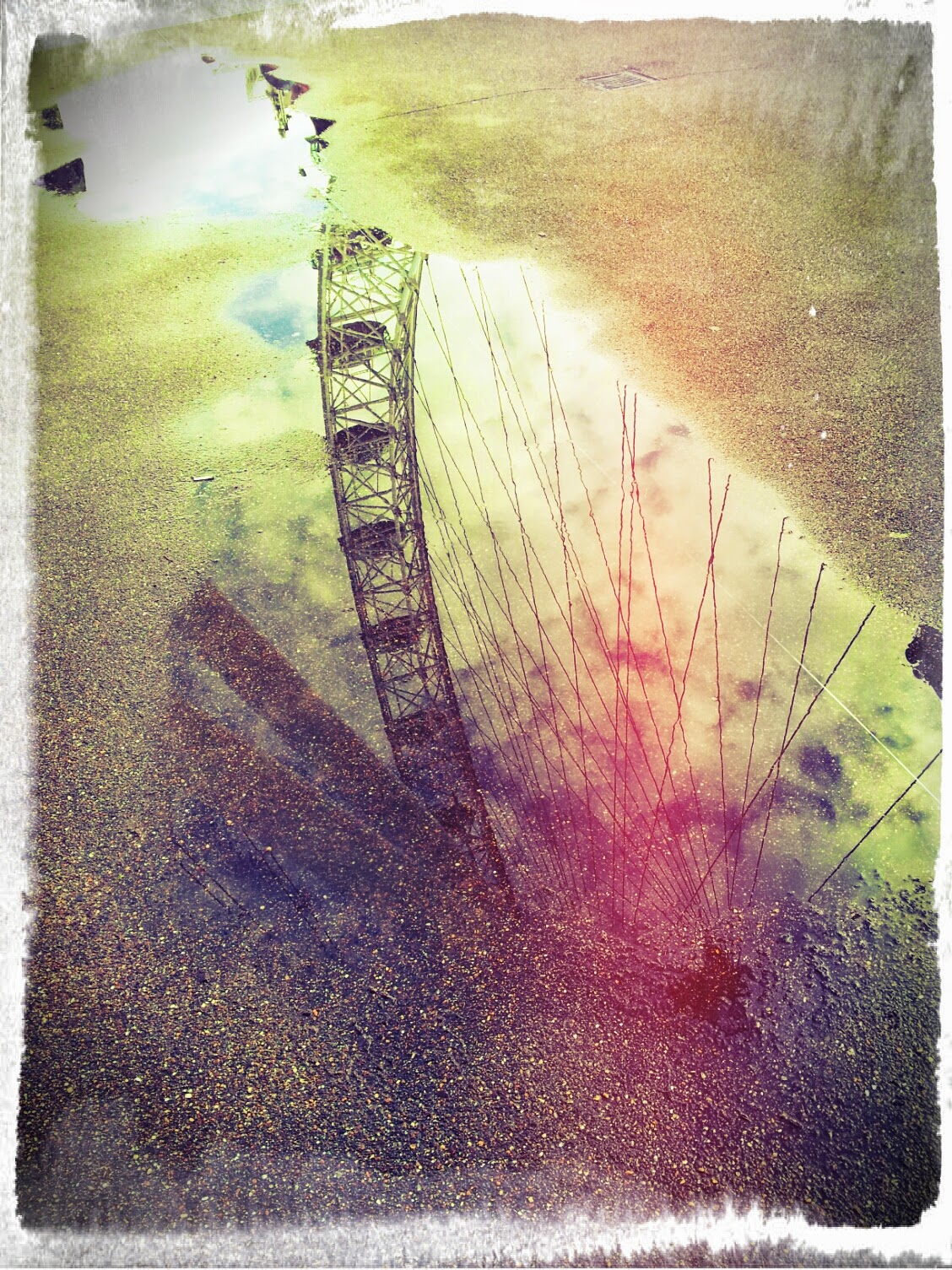 And in these pools maybe I finally start to see a bit of the fil rouge of London's soul, through the profile of its most popular symbols, which represent its souls, of tradition and history, and of modernity in everlasting change: they look at each other in the eyes everyday, but they don't challenge eache other, they stay side by side, while the water of the Thames keeps on flowing, the panoramic wheel keeps on turning and the tolls of the clock keep on dictating the crucial moments of the day. 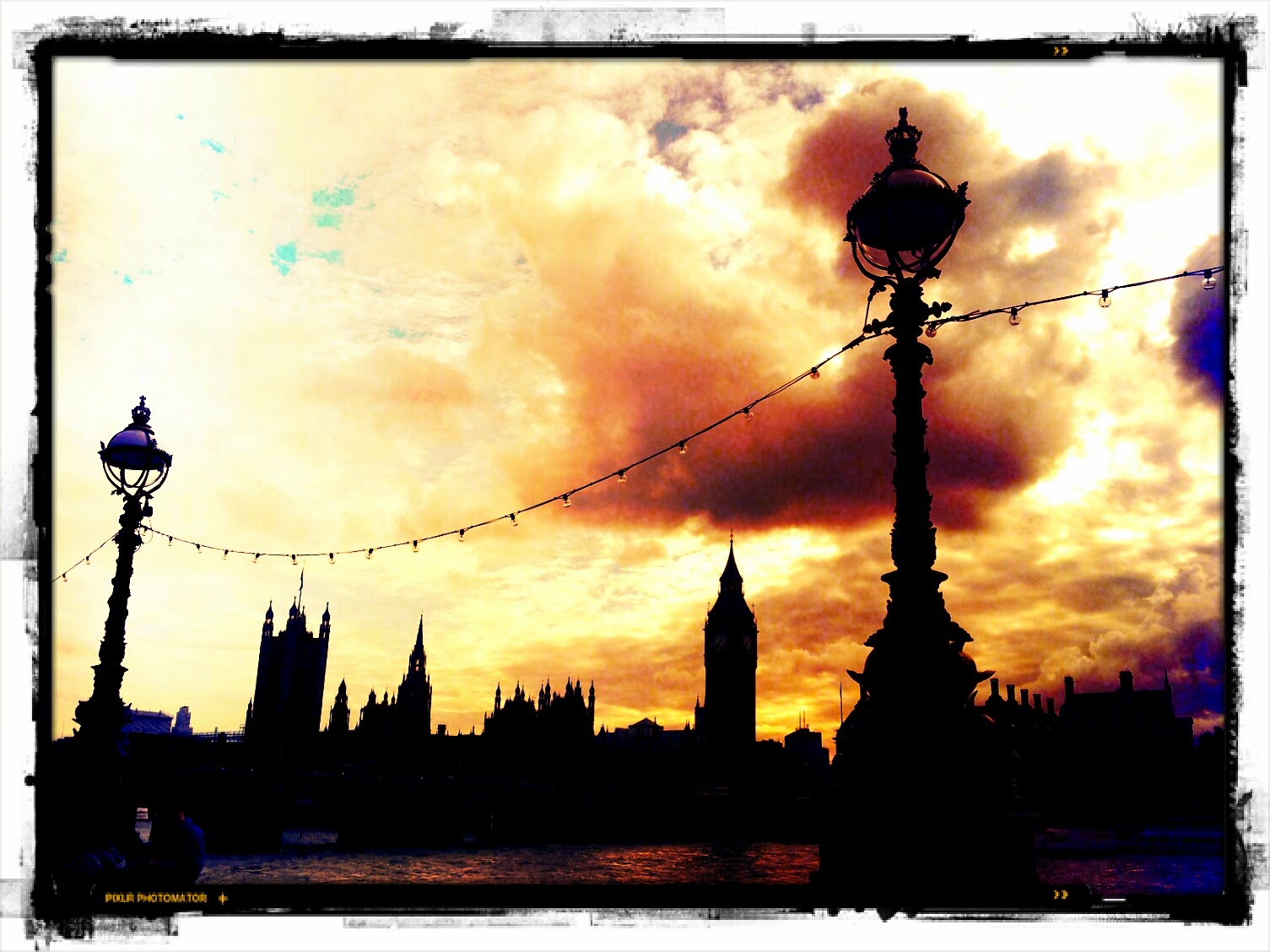 Maybe the best place where finding the resume of the soul of London is actually its skyline along the river...

We head towards Trafalgar Square along a Parliament Street close to the traffic, strangely untidy after the gay pride, just like a hall after a party.
Along the street we meet couples of skinny and blonde guys holding hands, with rainbow painted on their calves, and beardy bikers wearing black leather. 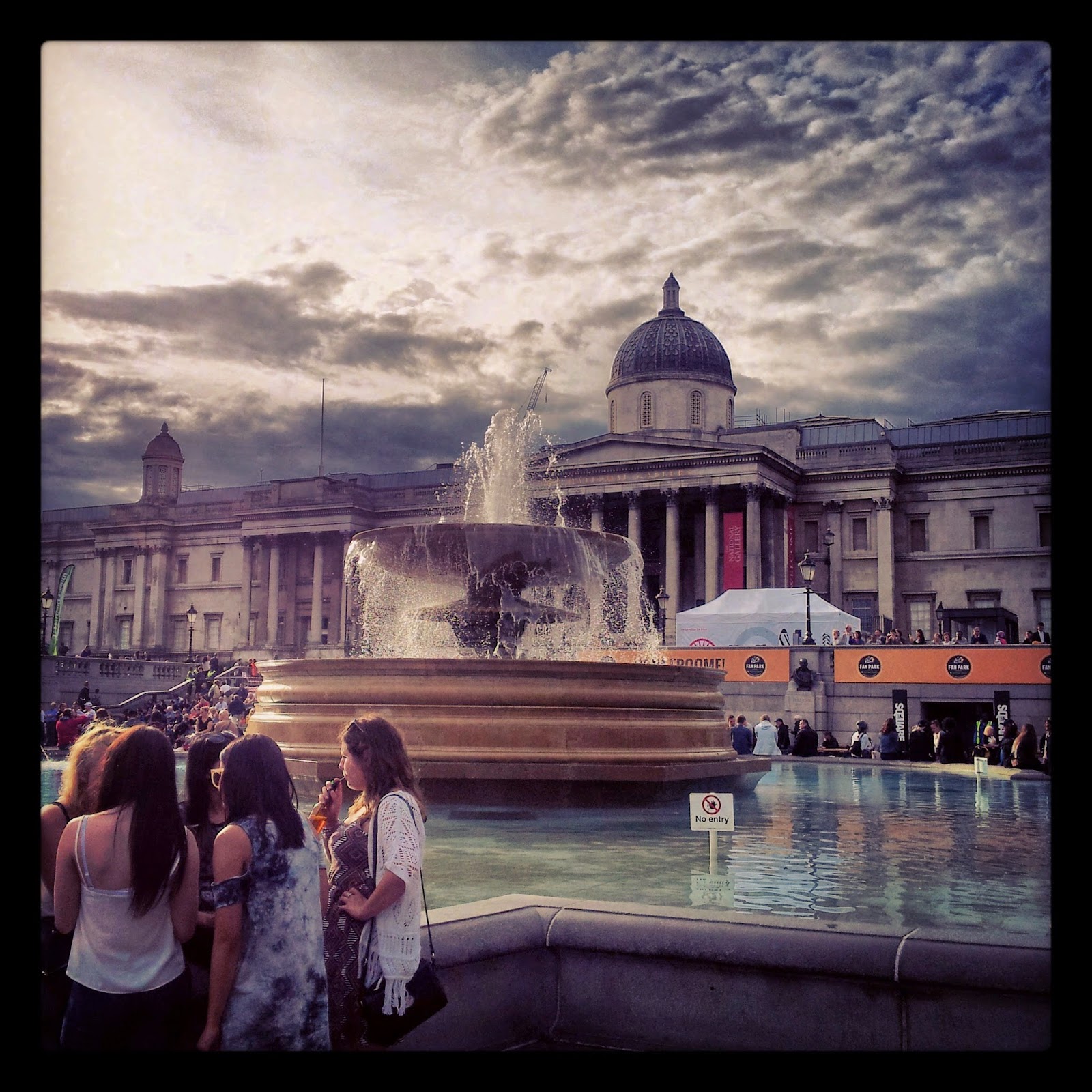 Boys and girls wearing rainbow in their clothes head towards the square, where Admiral Nelson is attending the concert from the top of his column.

We dine in an Indian restaurant next to King's Cross. 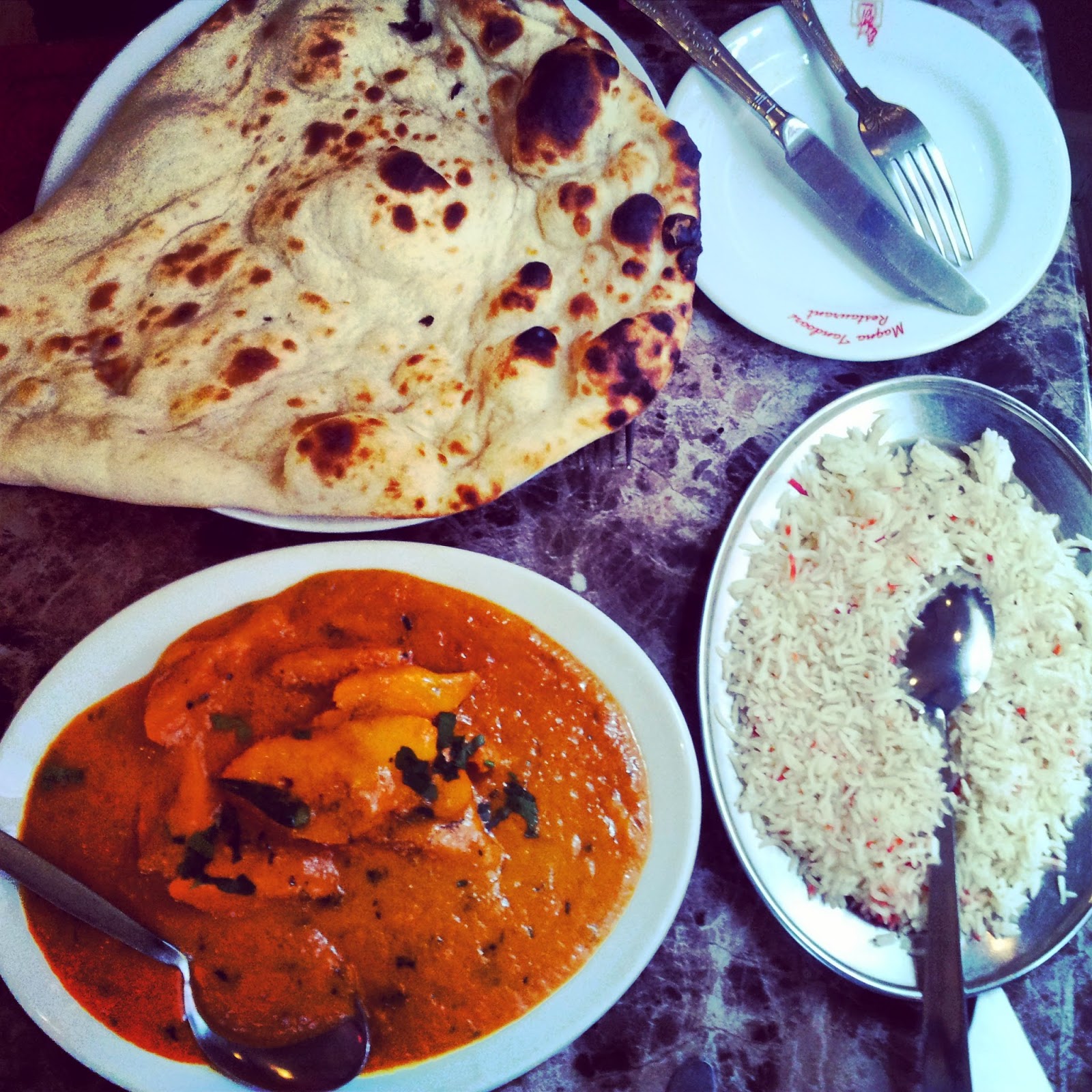 There's Brazil vs Chile on TV, and the Indian waiters are supporting the team who is hosting the World Cup, maybe out of kindness towards a table of excited carioca fans.
Next to them a distinguished gentleman wearing tweed talks about society with a perfect Oxbridge accent.
In the table near ours a Russian lady, sit together with her two teenager sons, cries continously.
Our butter chicken is yellow, instead of being red as usual.

No, I guess I haven't been able to grab the fil rouge that unites all the different souls of London neither this time.
But I will keep on looking for it... 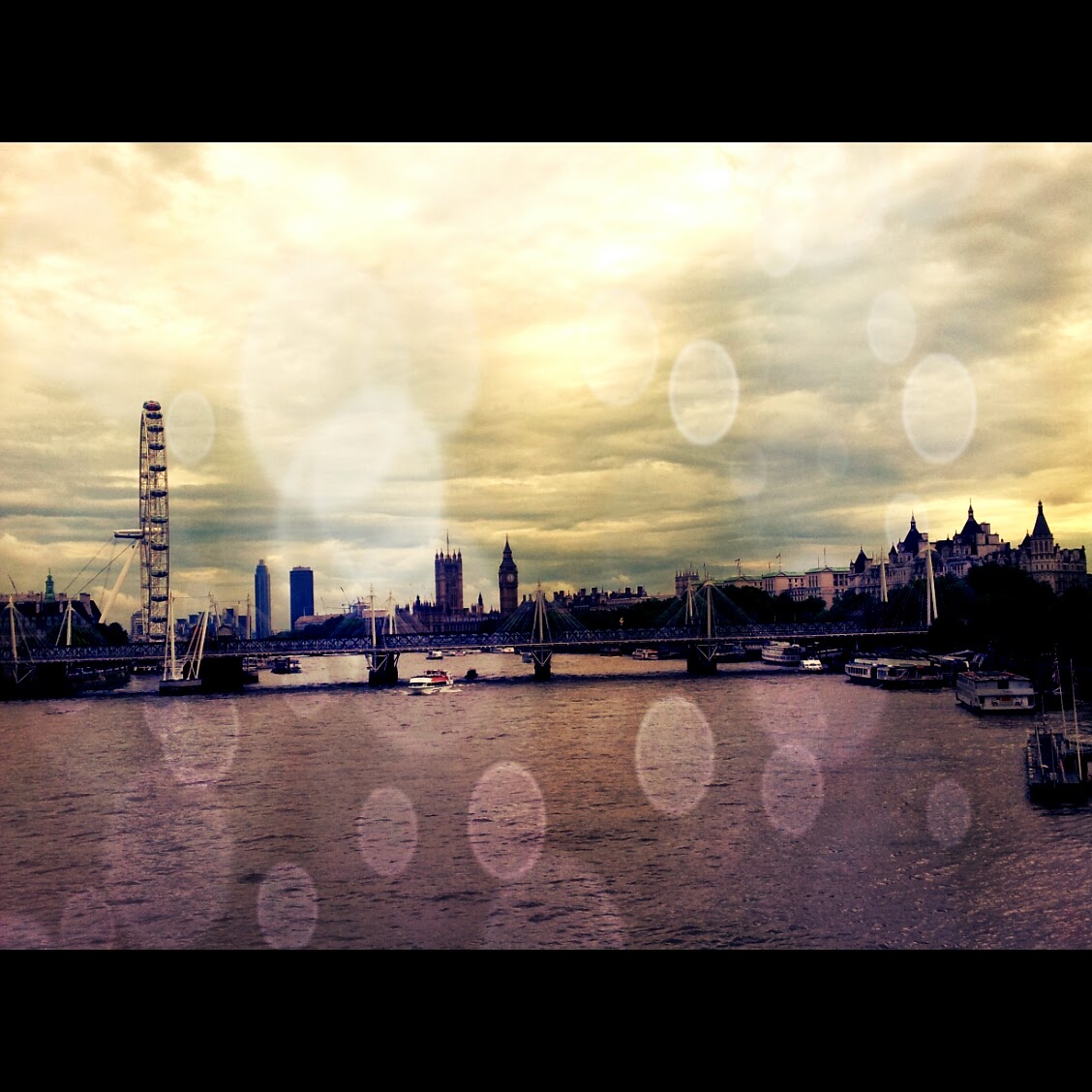