Whenever I visit a big and industrial city I always fear it might turn out too grey, brumpy and busy.
In the urban settlements I visit I'm always looking for that certain welcoming and cosy touch, that respectful bond with their own history and traditions which gives you the impression to step inside an old family's living room, where you can sip a tea looking at the pictures of the grandparents of your host.
But industrial cities are often too pragmatic to care about this aspect: the furniture of their living room is minimal, very modern and functional, and they find it self-defeating to get lost in nostalgic contemplations of the past, since their goal is running towards future as fast as they can.
But Newcastle was inspiring me.
Being from Turin, I was somehow feeling it alike even before actually visiting it.
First thing that came up to my mind when Ginger Cat proposed to put it in our itinerary, has been its soccer team - and the black & white stripes are already a very first analogy with Turin.
The second analogy is its soul of an industrial city.
Newcastle used to thrive when the coal and steel industry was prosperous; and then the crisis of this sector has made it undergo through many wrecks, among which it's always been able to keep itself afloat with its head up. 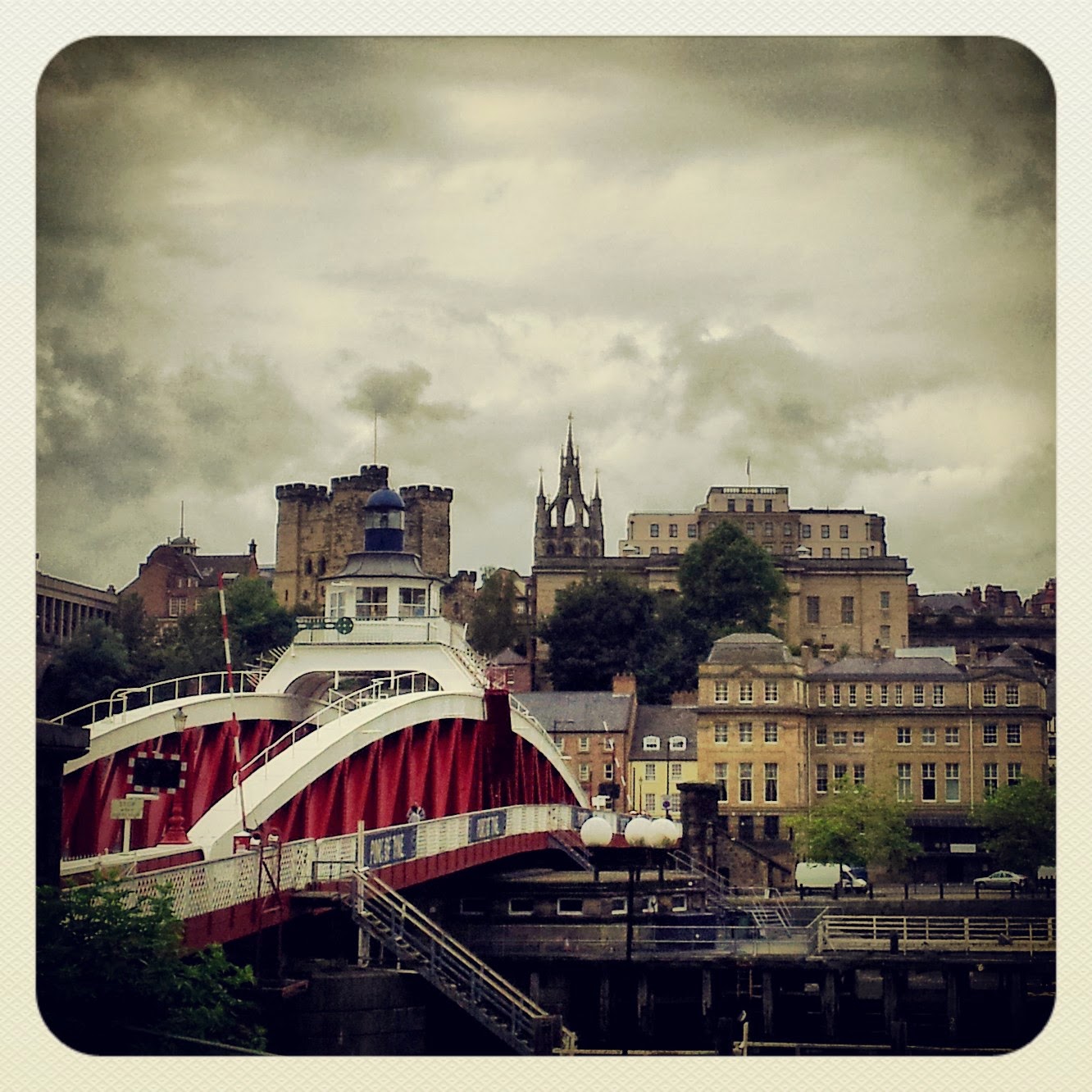 Among the adjectives Lonely Planet uses to describe it "elegant" and "refines" are being used more than once, and it surely has more than one building or one road worthy of such definition; but I think that the very first aspect that can hit you about it might actually be its attitude of hardworker: Newcastle might wear elegant clothes, but it's not afraid to roll its sleeves up and get its hands dirty.
It's a countryside noblewoman who joins the harvest in first person and underneath her velvet gloves has callous hands.
And she's, fairly enough, proud about it.

We arrive in Newcastle on a Sunday, under a grey sky which actually gives a proper atmosphere.
Streets around the station all have names which seem to be taken from Harry Potter (Grang(i)er, Neville...); and moreover have a weird planimetry which puts on a hard test the usually phenomenal sense of orientation of Ginger Cat.
There are just a few plates with the streets names, and also the pedestrian streetlights are half hidden.
It's a bit as if the city wouldn't want to reveal itself, as if its inhabitants were some kind of initiates of a secret sect, and, in order to become a member of it, they must succeed the trial of learning to move along the otherwise unknown labyrinth of streets, and learning by heart their names.

Also finding the Blackfriars, the Medieval cuisine restaurant set inside an old convent where we'd like to have lunch, gets a little less easy than expected. 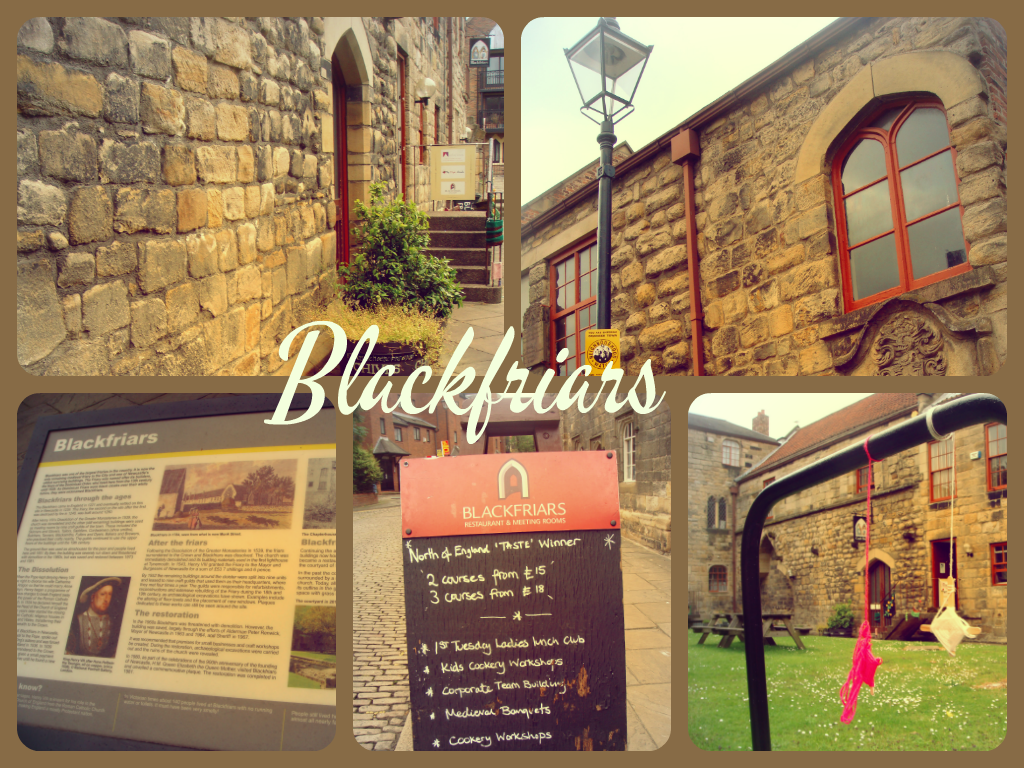 When we finally manage to, we find out that the place is full, so we just get content to snap some pictures from the outside and try to imagine how might be the team building courses that are hosted there: a challenge in the kitchen like a Masterchef Convent, or a medieval sword tournament?
Anyway the intimate and gothic atmosphere of the location might actually turn the idea of having a "team building" less dreading than it normally would to me.

We find some other Gothic in the St. Nicholas Cathedral, guarded by a Queen Victoria painted in black and sit on her throne. 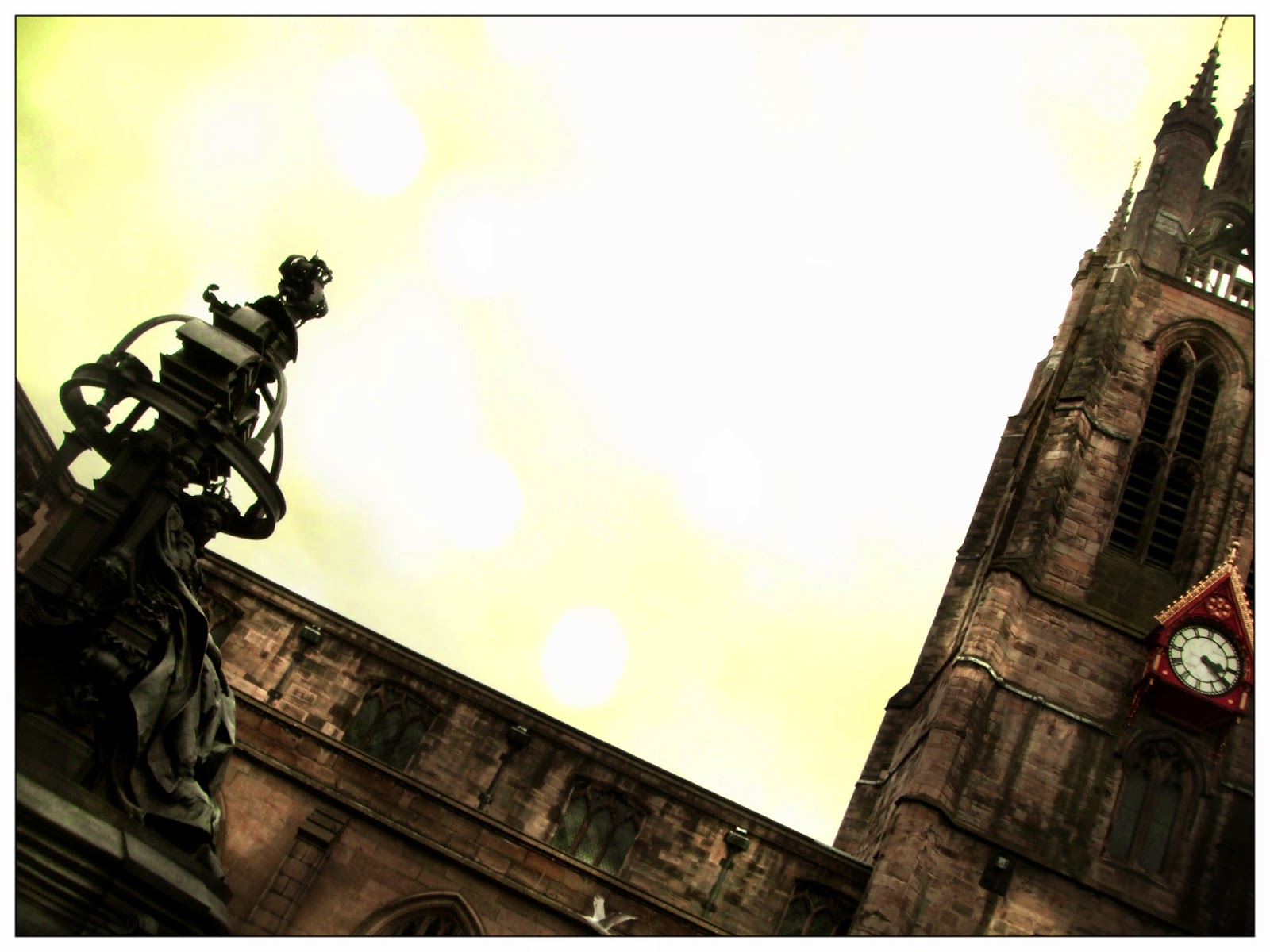 From the outside it is simple and not much fanciful, but the inside is interesting and varied.
On the wooden archways some vintage Union Jacks are laying proud, being some centuries old and perhaps veterans of some wars or revolts. 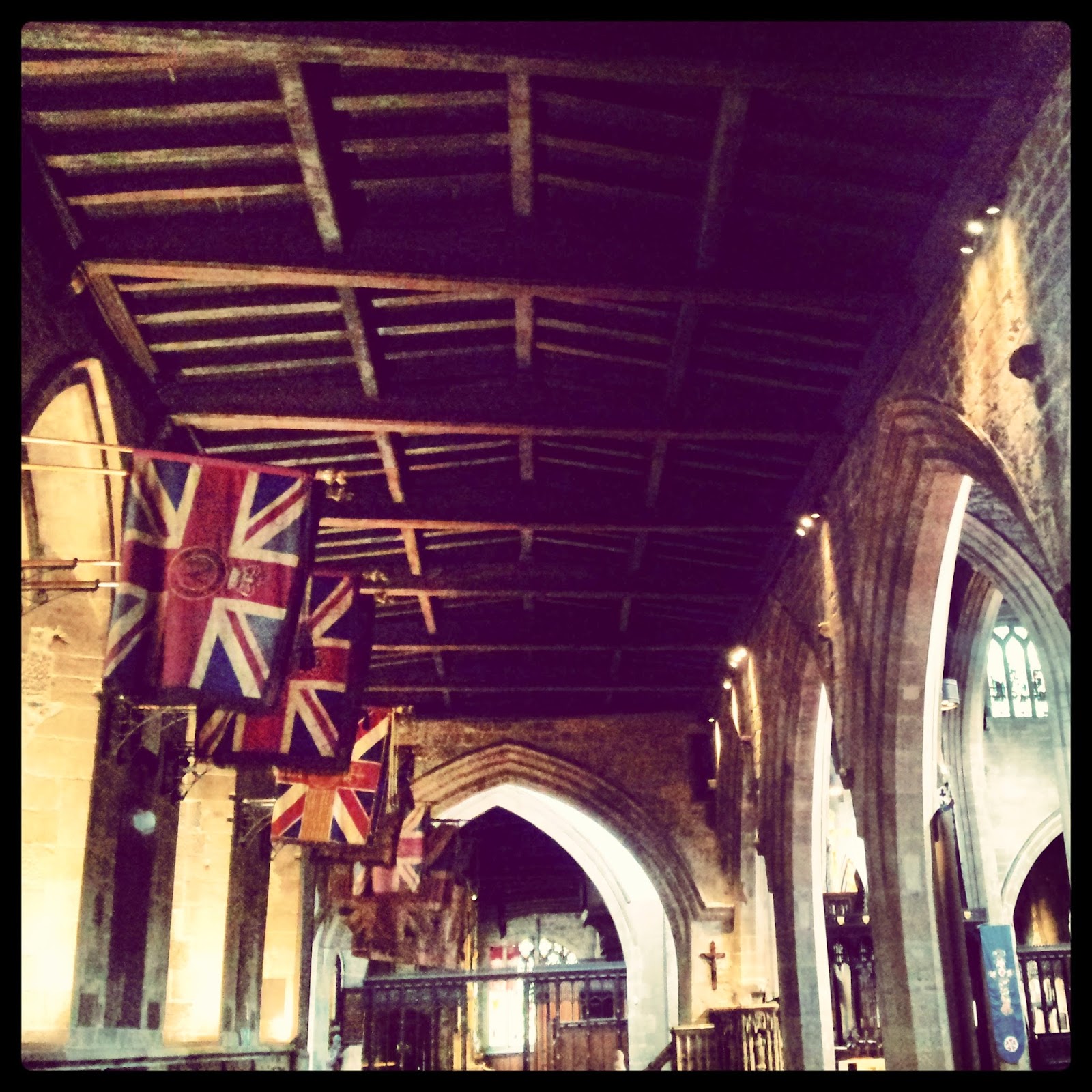 Elaborated glass windows with scenes and colours enlight the naves with soft discretion. 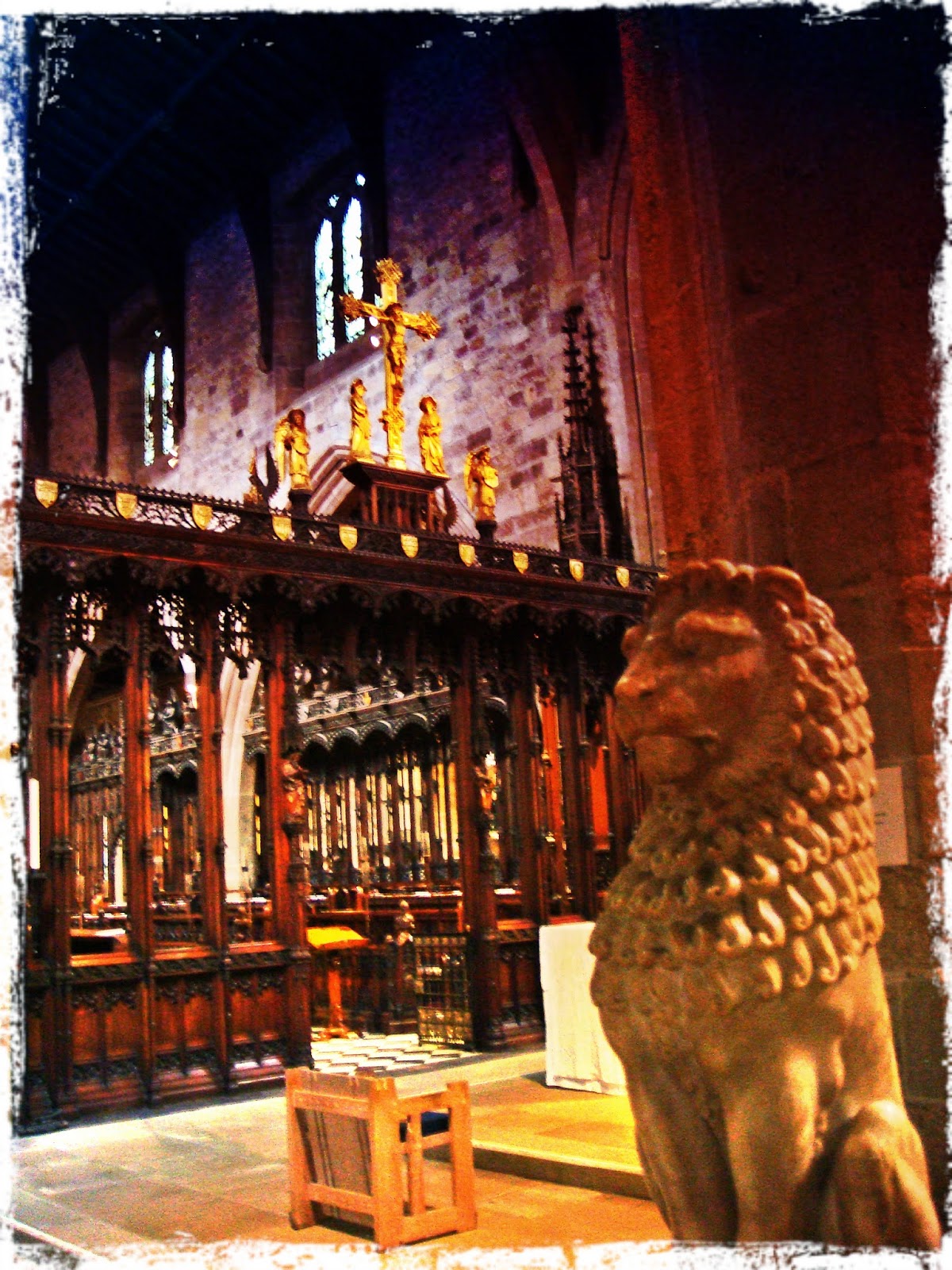 Worked marbles frame the altar and some saints statues who rest here. 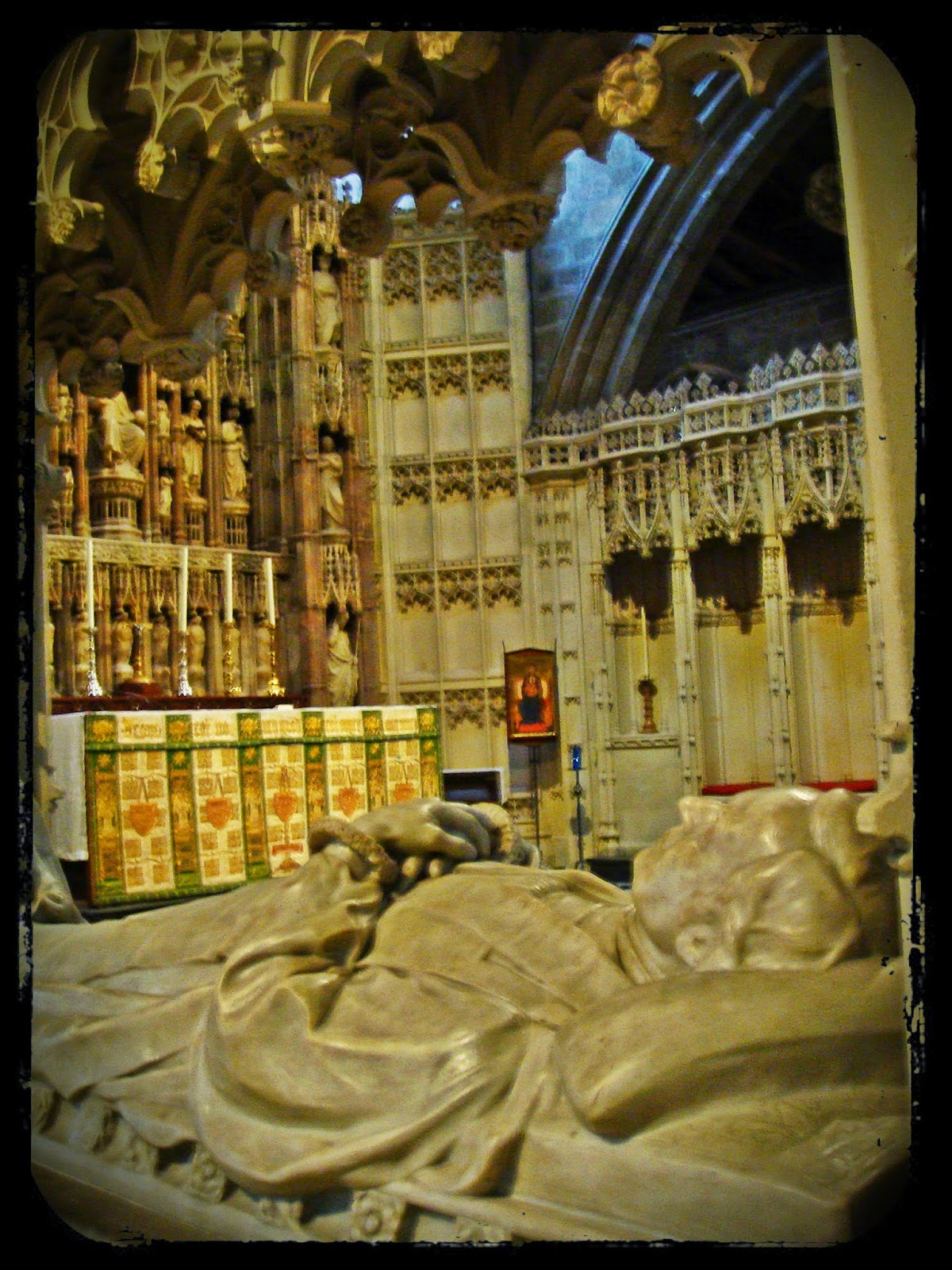 In a nique there is even a play corner for the kids.
It may be a bit controversial idea, but, perhaps, it's just coherent with Newcastle's pragmatism: it might be strange to invite the children to play while there is a mass, but it's surely an effective way to avoid them getting bored and distracting others with cries and tantrums. 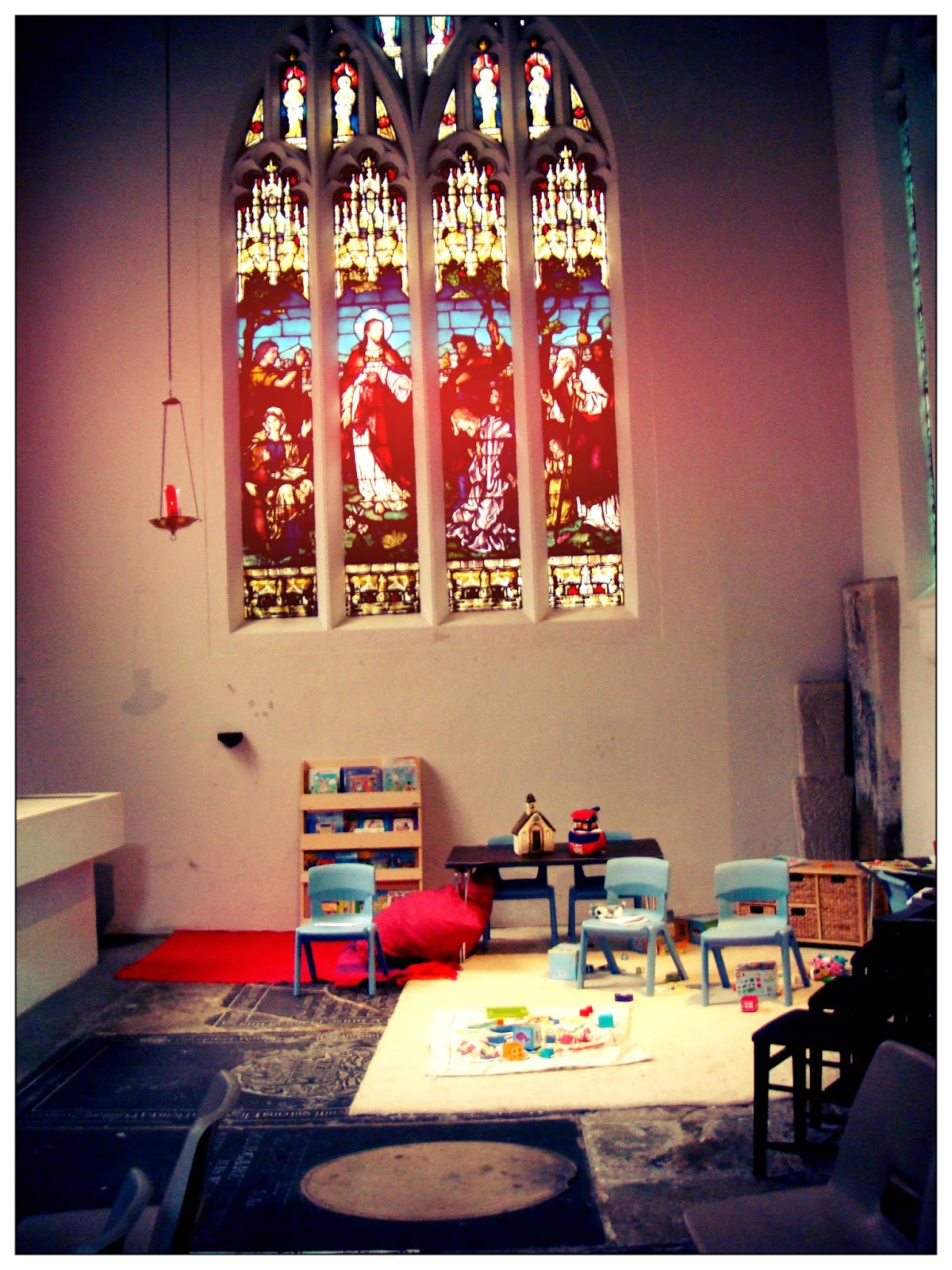 We give up following an itinerary or a map, and we wander randomly.
Newcastle is a city of men. 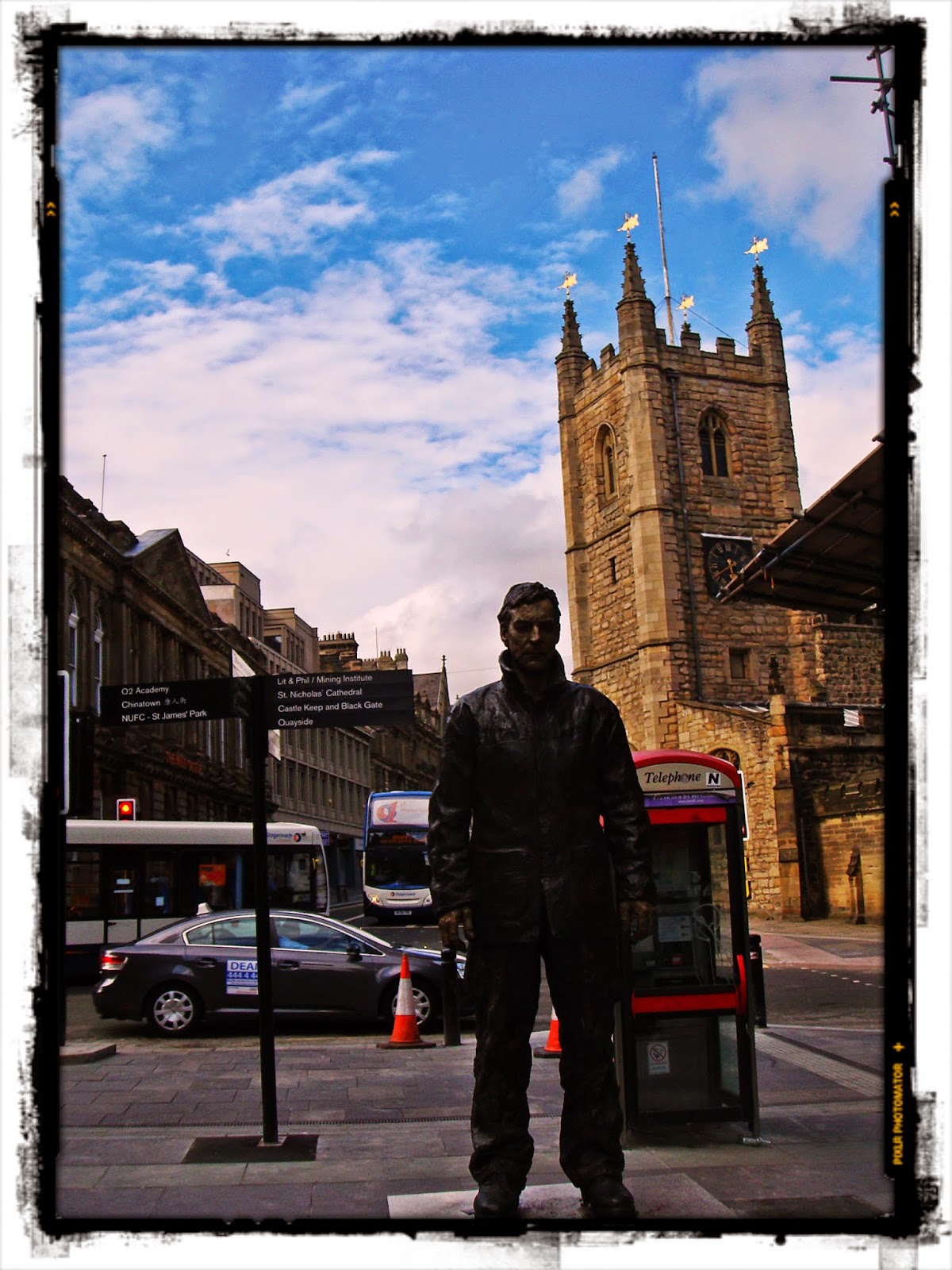 Not because it is harsh and hard, but simply because we don't see many women around.
Since Ginger Cat always states that Genoa, instead, is a city of women, maybe they could get a twinning.
Geordies, anyway, are rough and gruff just in appearance, because we actually meet friendliness and welcoming just everywhere, together with an almost Scottish accent.
Where the name "Geordie" comes from, nobody actually knows.
Hypothesis is that it might come from a shortening of the name of the Protestant king of German origins George I, to whom the city decided to stay faithful, against the Catholic pretender James Stuart.

And people's accent is not the only thing that reminds of Scotland.
Closeness to the border can be felt in quite many things: in the spires of some churches, in the latches that recall Edinburgh, in the blackened chimneys and in the somehow grey sobriety which are a bit Glasgow-like.
Contemplating it from one of its seven bridges on the Tyne I keep on getting in my mind some flashes from the border of the Old and the New Town of Edinburgh. 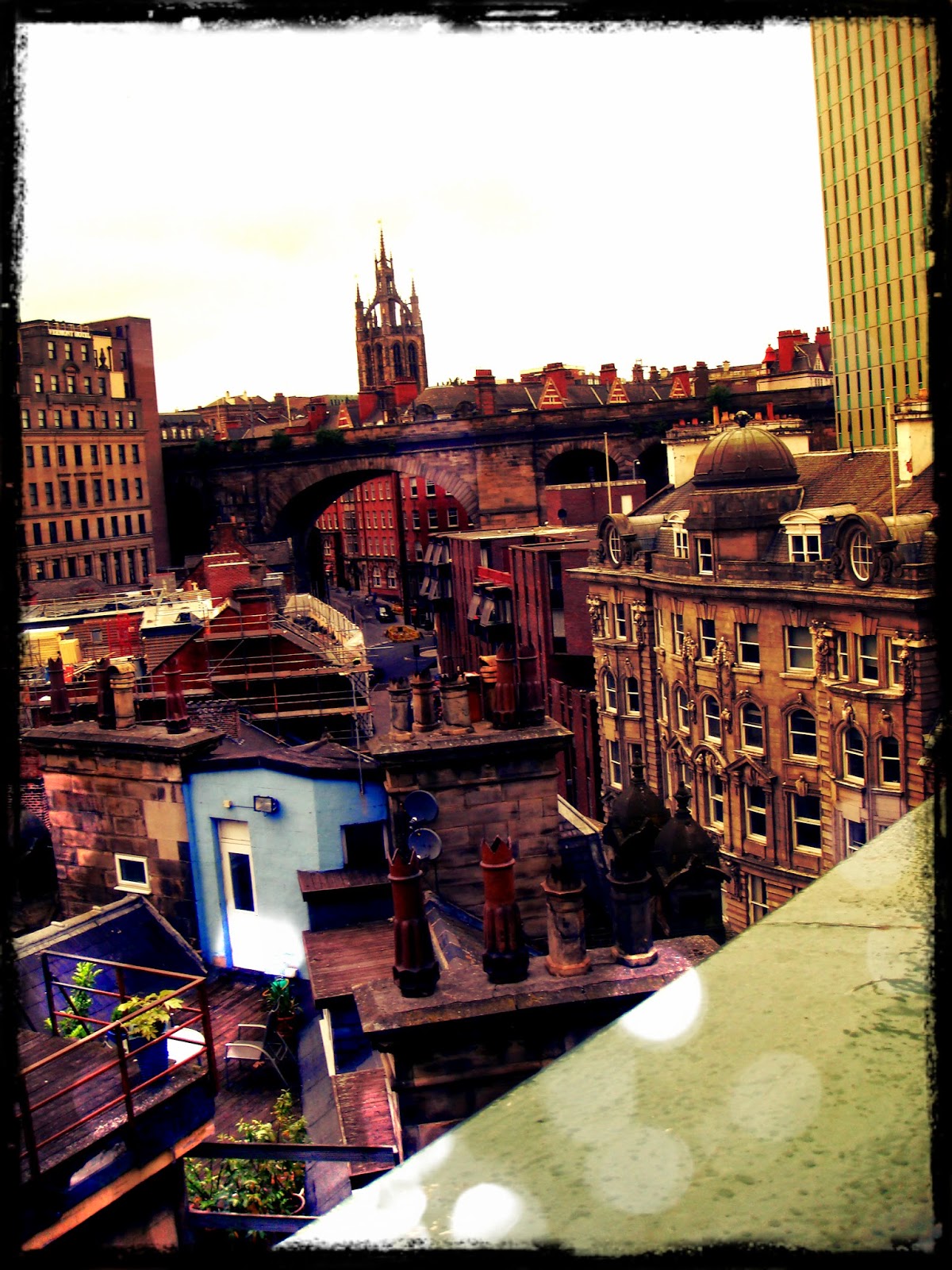 From here you can also notice the total domination of the seagulls, who have taken complete possession of some abandoned buildings, nesting in their ravines and modifying their physionomy: on the spot it actually looks like a scene from a post-apocalyptical science-fiction movie, as if the birds had taken complete possession of the whole city, evicting the humans, or obliging them to survive as their slaves in order to get nourished with ice creams and fish & chips. 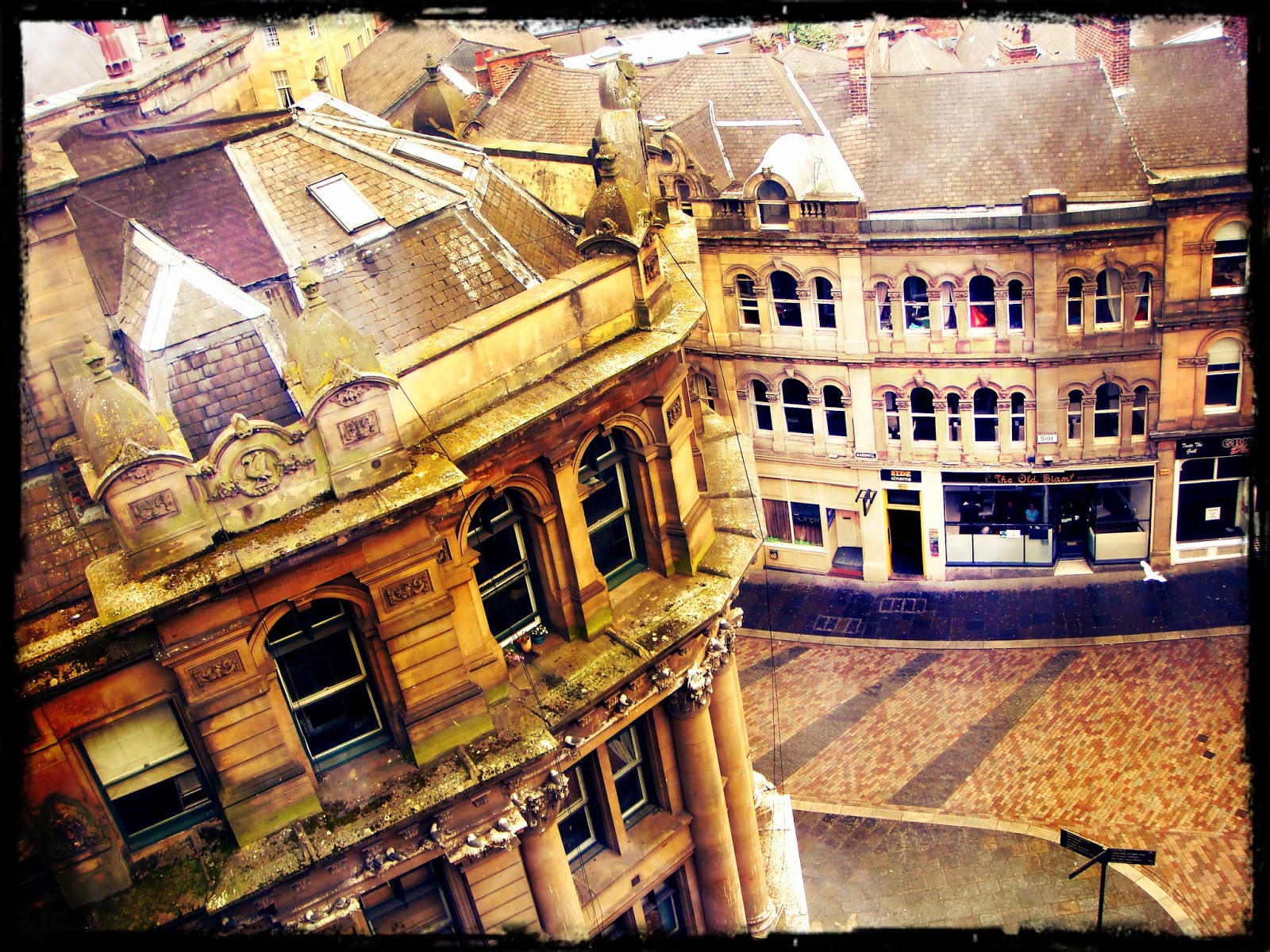 The Planet of the Seagulls...
Take note, Tim Burton.

Along the Tyne there is someone doing bungee-jumping, throwing himself from a crane till skimming the grey water. 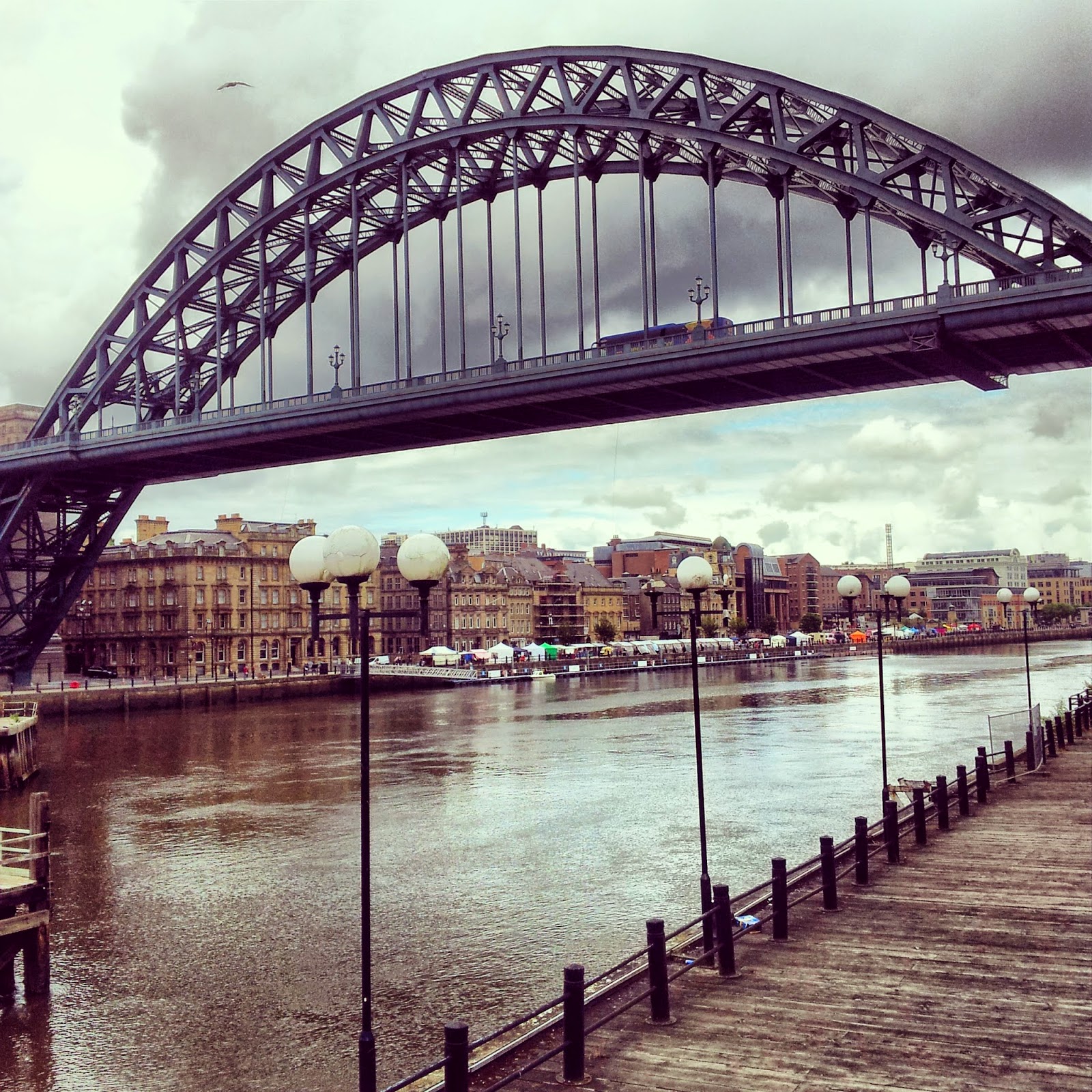 There's a sand triangle where a couple of kids are quietly playing, and some sweets and toys booths which are already dismantling. 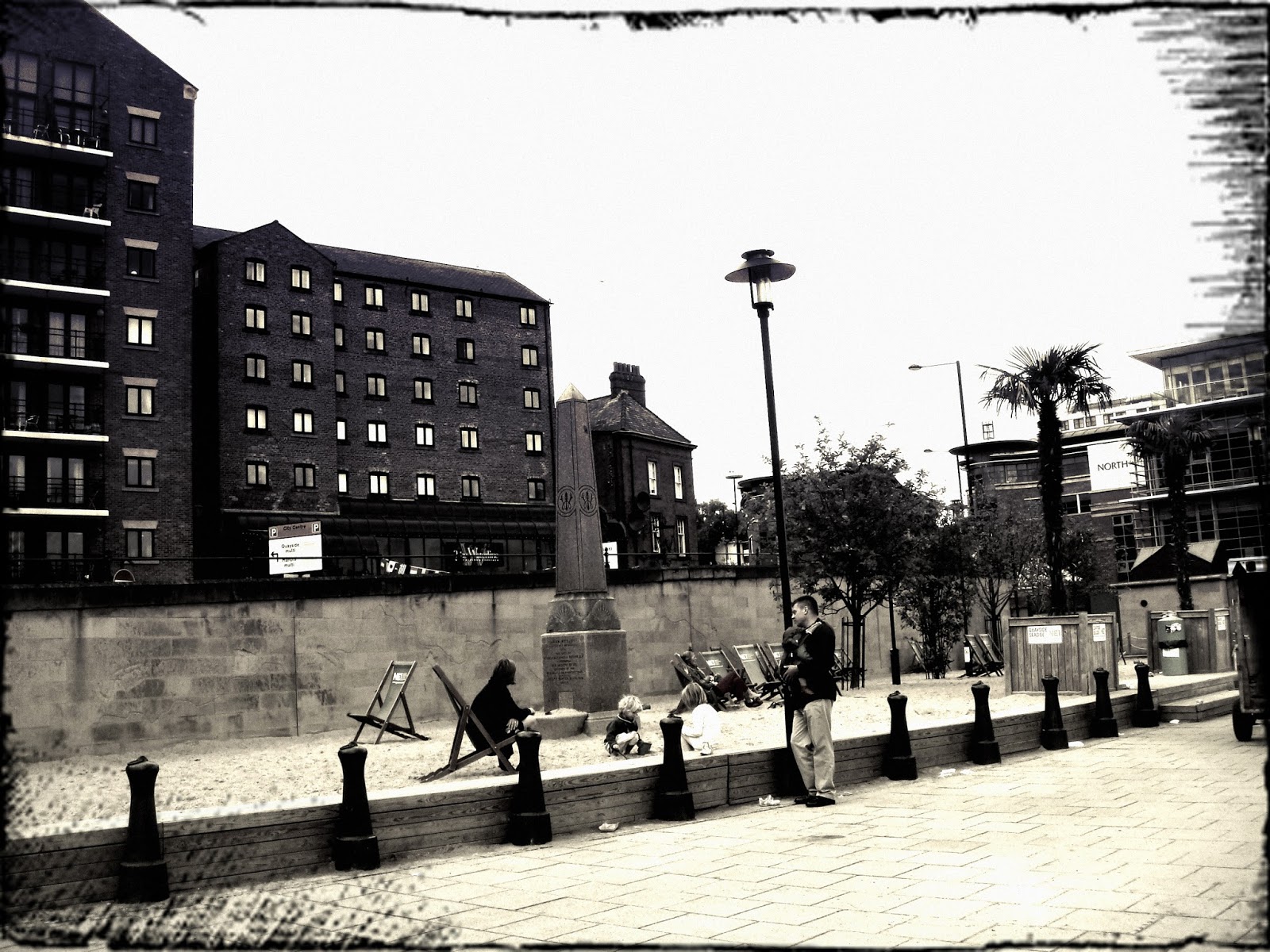 Everything here closes at 4 pm on Sundays.
A thin rain is starting to fall and the atmospheare turns melancholic.
The buildings along the river are blackened out of soot and the more modern constructions seem to not get integrated too well with the older ones: they don't have any harmony, as if they were living side by side without actually talking to each other.
There isn't really any conflict between them, but it's like they both wanted to go on by themselves, straight on their own path. 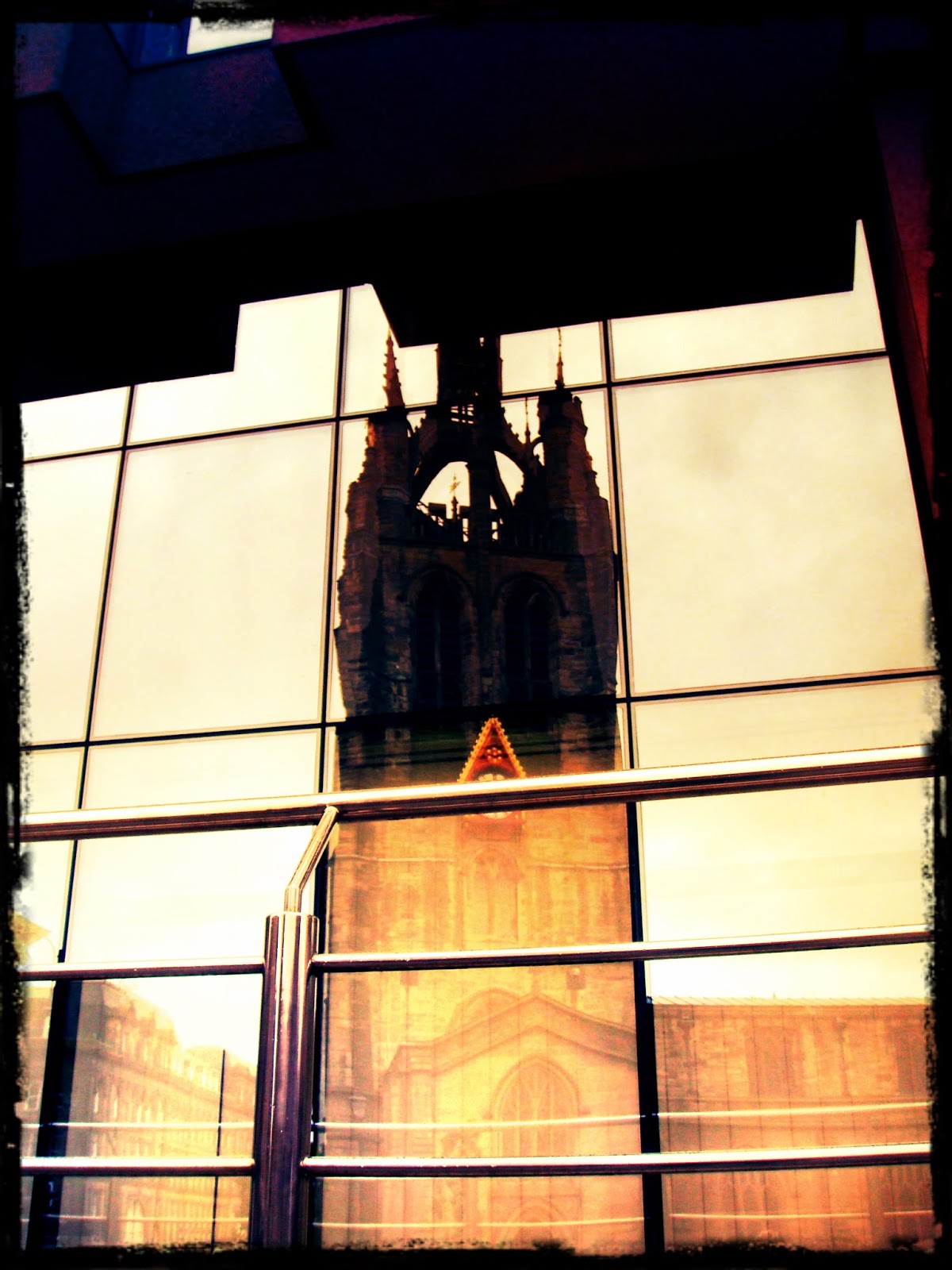 It's the pragmatic spirit of the industrial Newcastle: it doesn't have time for fripperies, it doesn't have time to think about the past. It must go on and it goes straight, with head down, without turning back.
Maybe this city won't be pretty, but it's real: it shows its soul straightly, without any filters to appear better, without any prim manners to build courtesy masks. It doesn't see the point of it, it's always been too concrete to dedicate itself to this role games of the high society.

Rain makes us hide in the Union Room, a Georgian house transformed into a pub.
We dine with a toastie in a small hall with a fireplace, paintings on the walls and many bookshelves.
Real books, not ornaments. 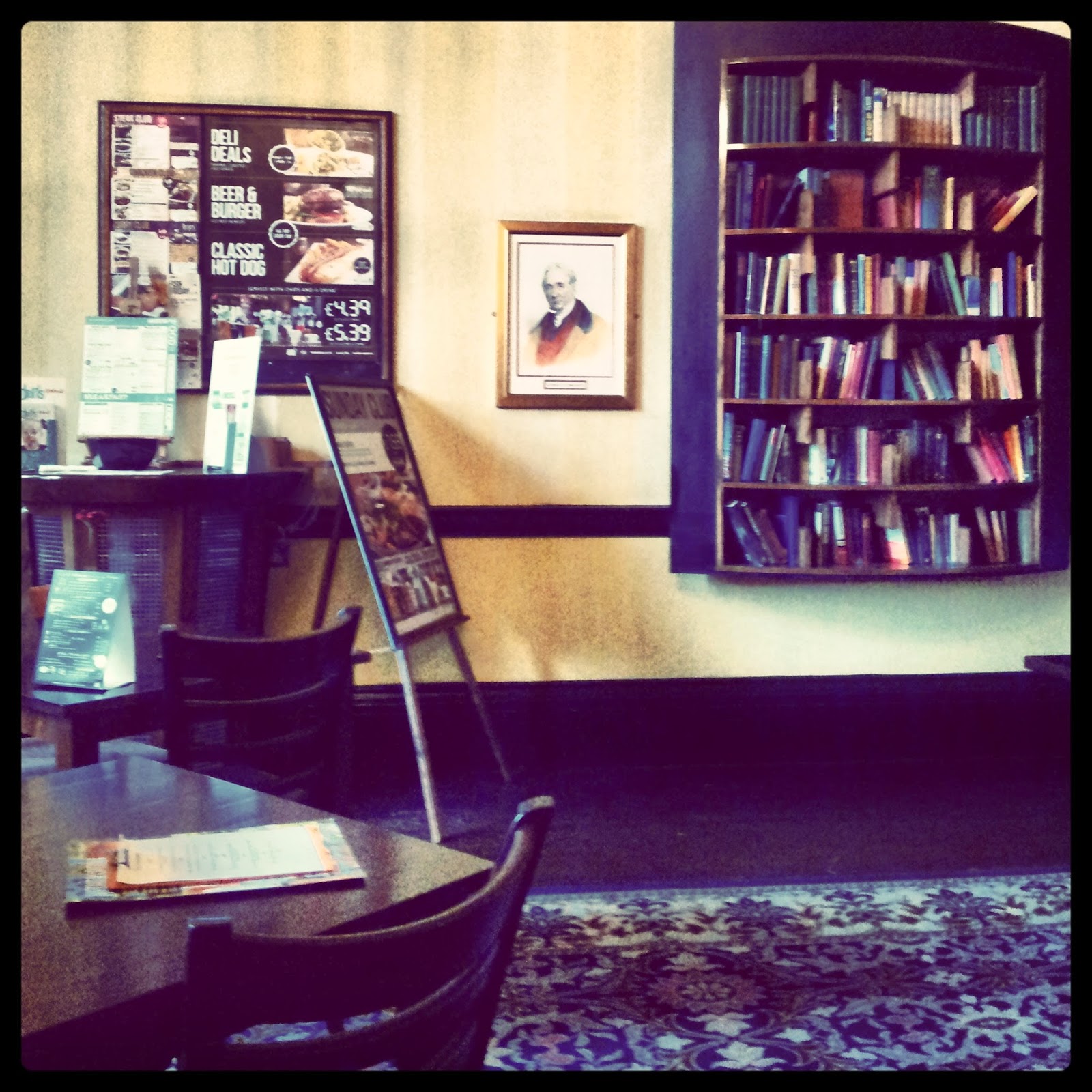 Whenever I see books I always have to go and stuck my nose inside them. It's weird for a cat to admit having a calling as a bookworm.
There is one called "Adua" and it's from an Italian writer, but it's written in German.
From the window we can see the street, gutted by some works in  progress.
Around us a girls' night out: plumpy girls wearing very high heels, pink shades and wearing a few inches of fluorescent fabric that seem to us a bit too little according to the outside temperatures. They laugh out loud and flirt with the barman.
It's a weird contrast with the Georgian furniture around.
Here too, it looks like new and old travel on two different platforms, peacefully ignoring each other.
Who knows, maybe a day will come when they'll learn to shake each other's hand and to look in each other's eyes, to get to know each other and learn something...
Pubblicato da Serena Chiarle a 17:55