Bodnant Garden - how do you imagine Paradise?

There are places that give you the impression of having already seen them even before you have actually visited them.But this doesn't happen because you have seen them in some movies or in some déja vu - it simply happens because they are very similar to something your fantasy has created while you were daydreaming.
They are places that, as soon as you step there, make you open your mouth with marvel and make you say "Oh, so you exist for real, then!".
This has happened to me with Connemara, whose green and blue lands were looking incredibly like to the kind of landscapes that my mind used to create as a background when I was reading fantasy novels; and this has happened with Bodnant Garden as well, which is the garden of a villa around Conwy, in Northern Wales, that now is entirely open to the public.
British people have a really special care and love for green: in every city, being it small or big, there are multicoloured flowerbeds and very cured public parks - and, if they already do such marvels with public areas, the level of awesomeness that you can meet in a private garden is even more powerful.
My first thought has been related to "The Secret Garden" by Frances H. Burrett: I was imagining it exactly this way when I read it as a kid, with this enchantment of flowers, of colours, with the rocky walls, the hidden corners, the streams, the small lakes, the wooden benches...

But Bodnant Garden is actually bigger, with more variety and fantasy.
It takes about a couple of hours to visit it all, but these are hours which fly away so quickly: every corner has something different to see, and each one of them is enchanting.
These two hours actually quickly turn into three, four... and it gets difficult to find the will to go away. 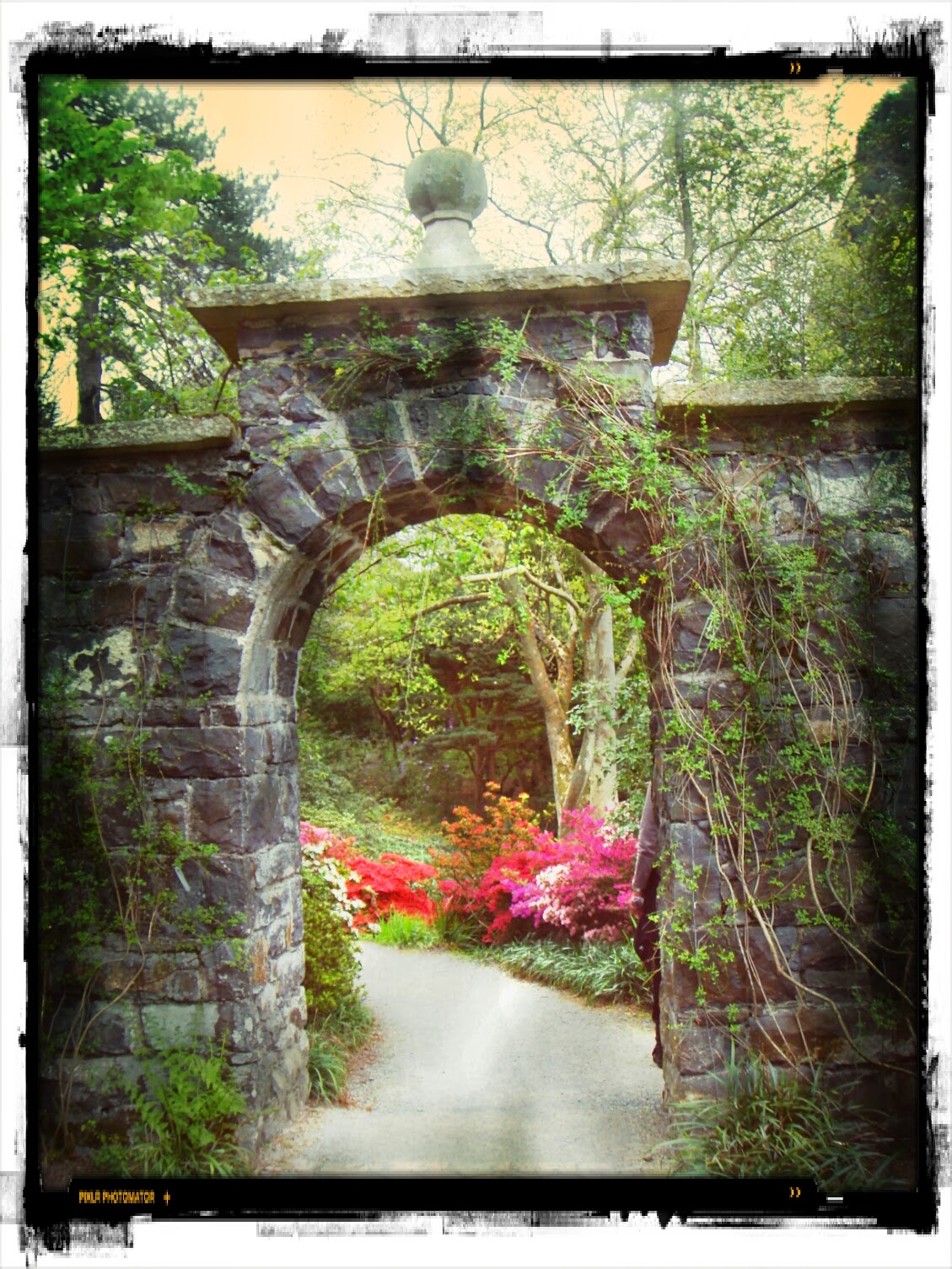 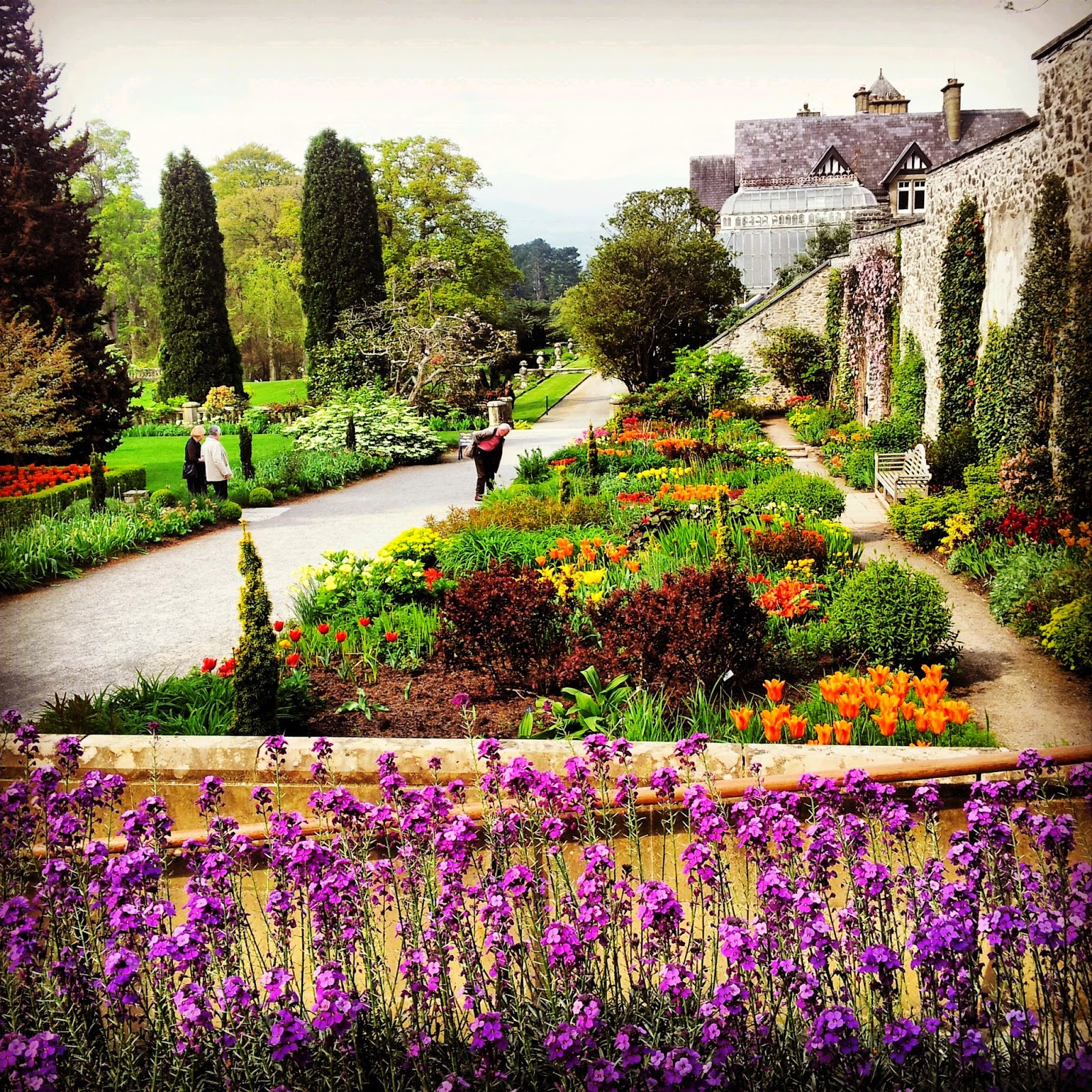 Bodnant Garden is a rhododendrums blaze: it's the kind of flower they are specialized in and they have almost 150 different species of them. 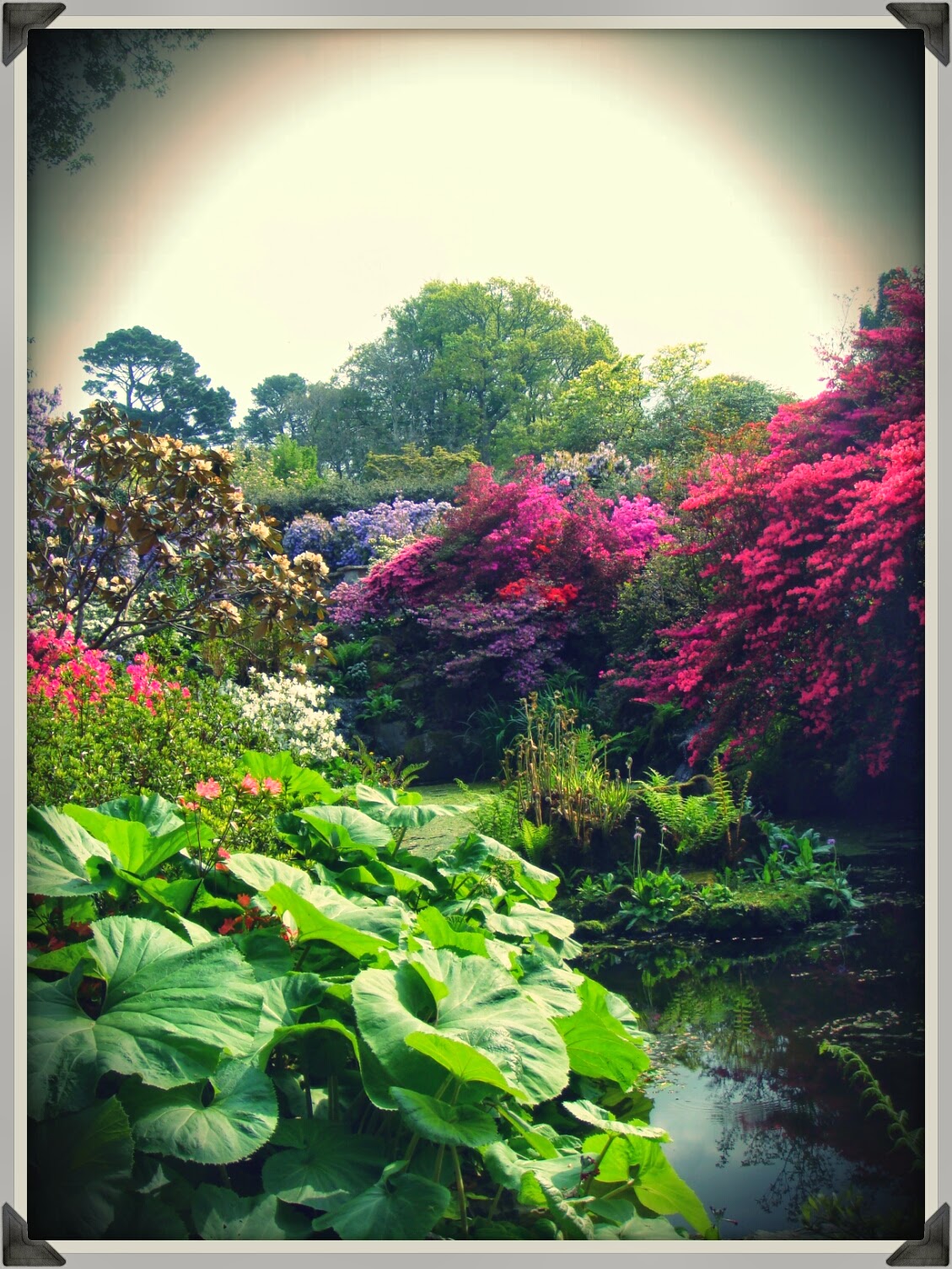 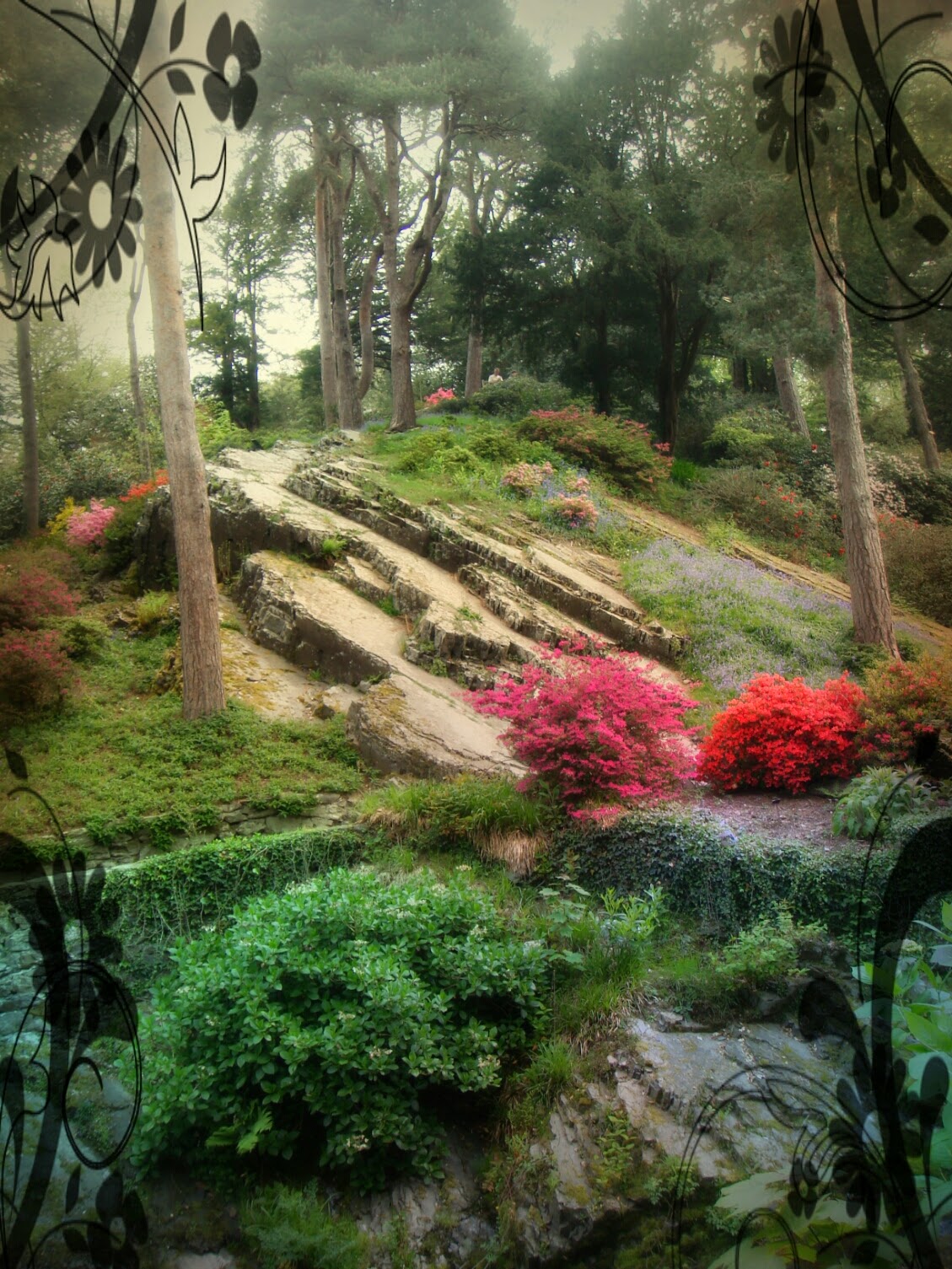 There are small hidden niques, with fountains, ponds and benches where you can sit and rest to admire the beauty all around.
And here too, there's the unmissable blaze of petals and colours that frames the scene. 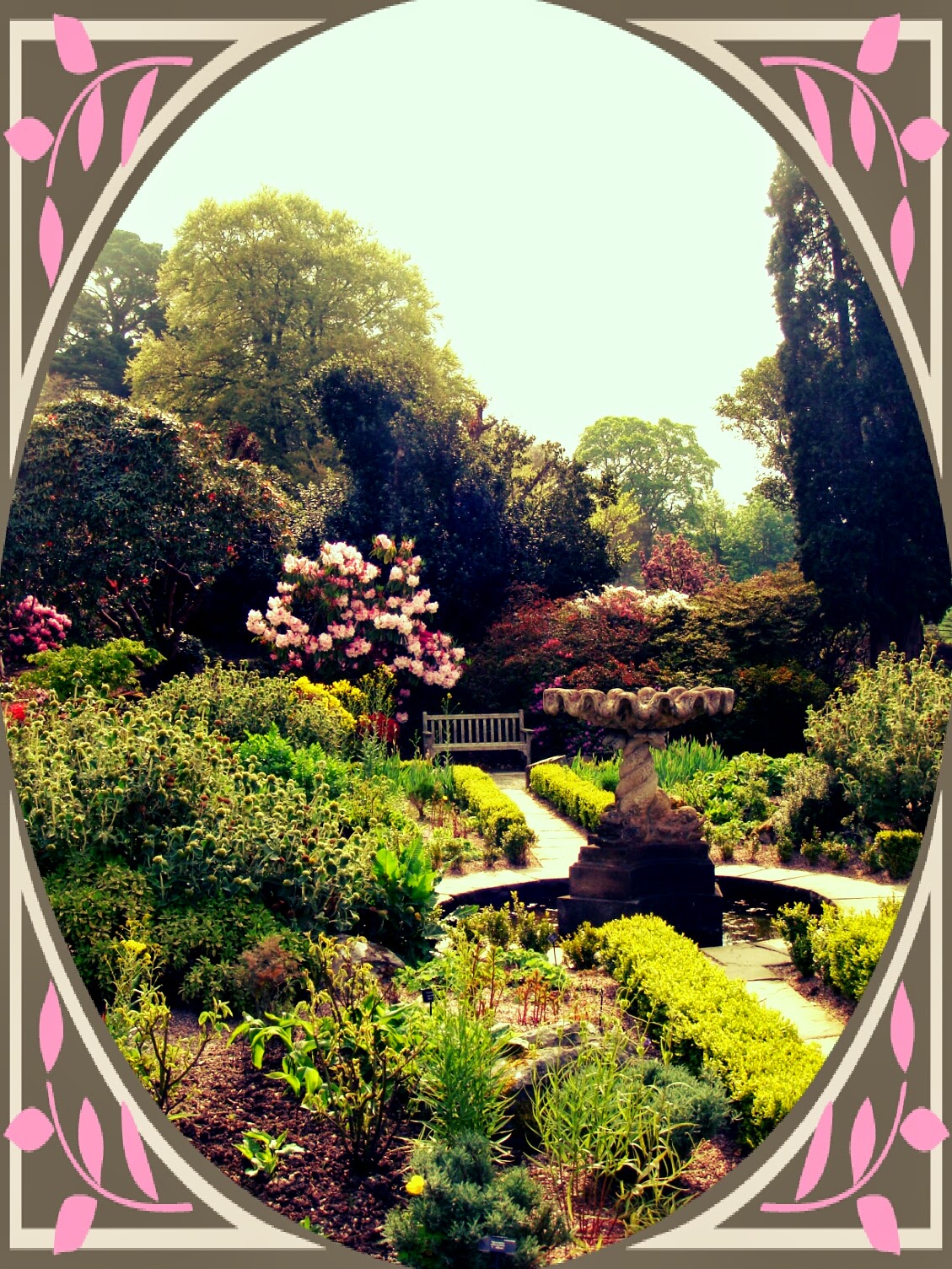 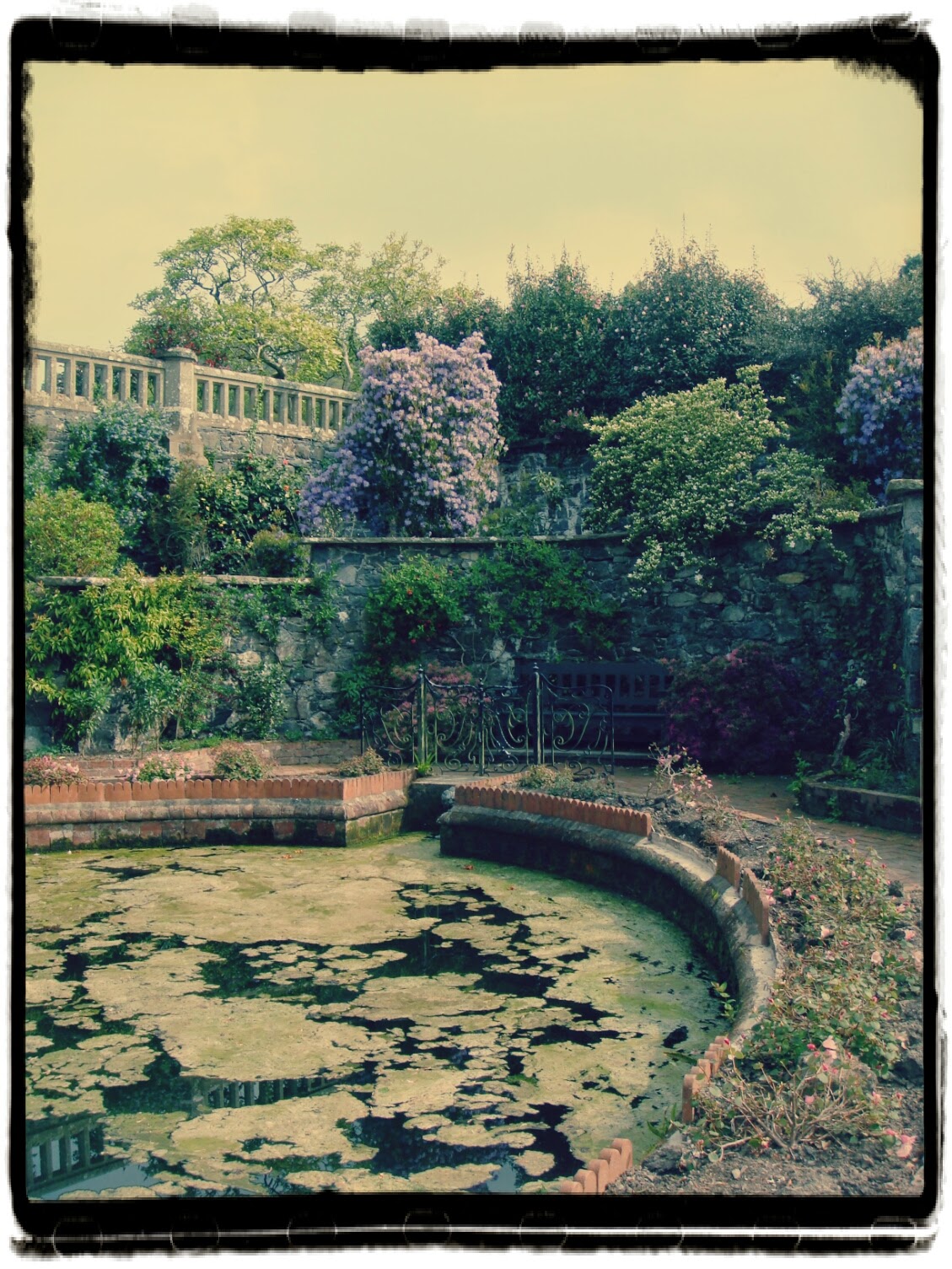 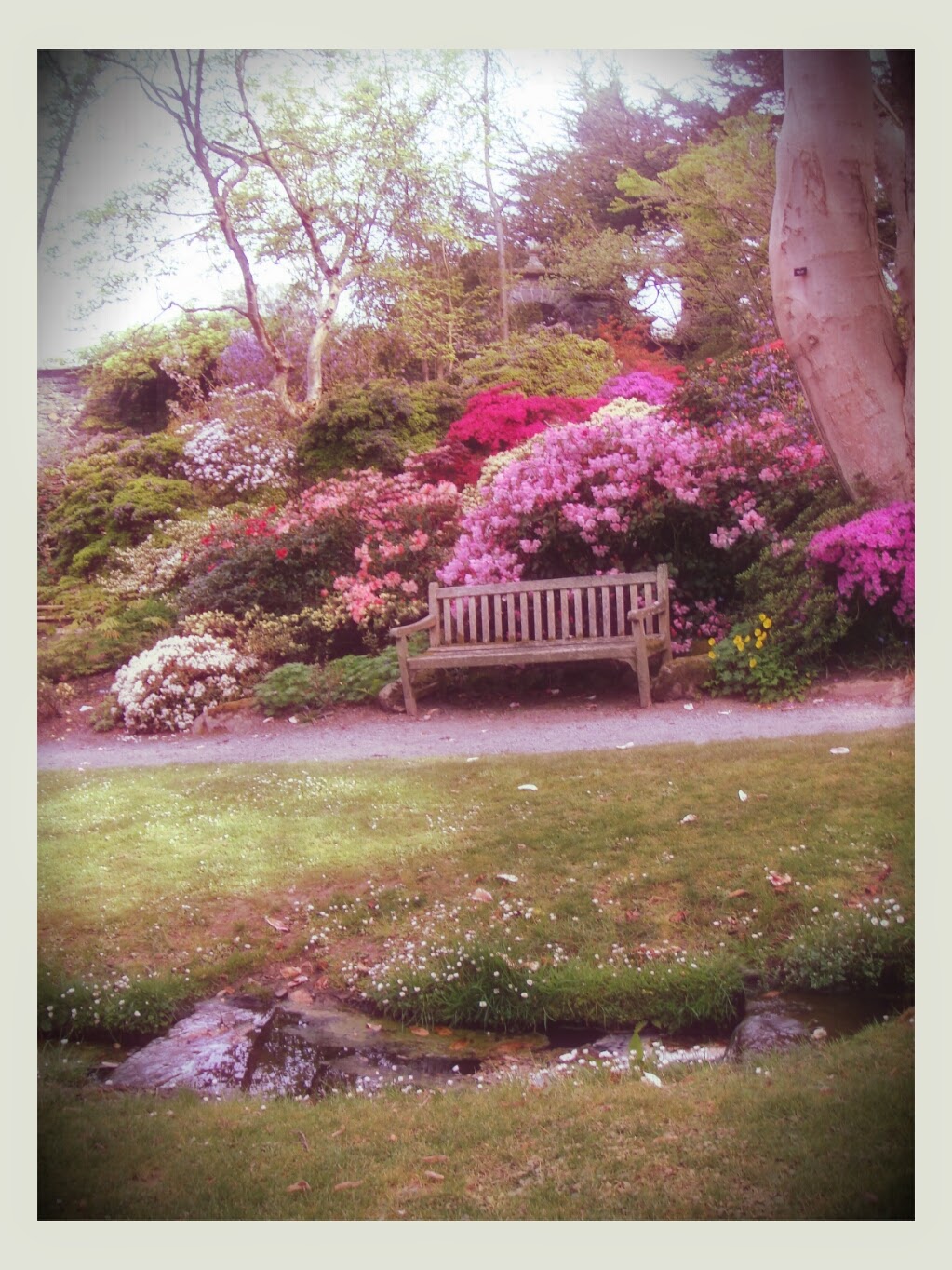 Underneath an oak, almost unnoticed, we have found a couple of small graves: they have been sculpted in memory of the cats of the first proprietor of the garden - who must surely have lot to exlpore and many corners where to hide, by living in a place like this. The stream that starts here, at one point becomes a fall, passing through a wood scattered with bluebells. 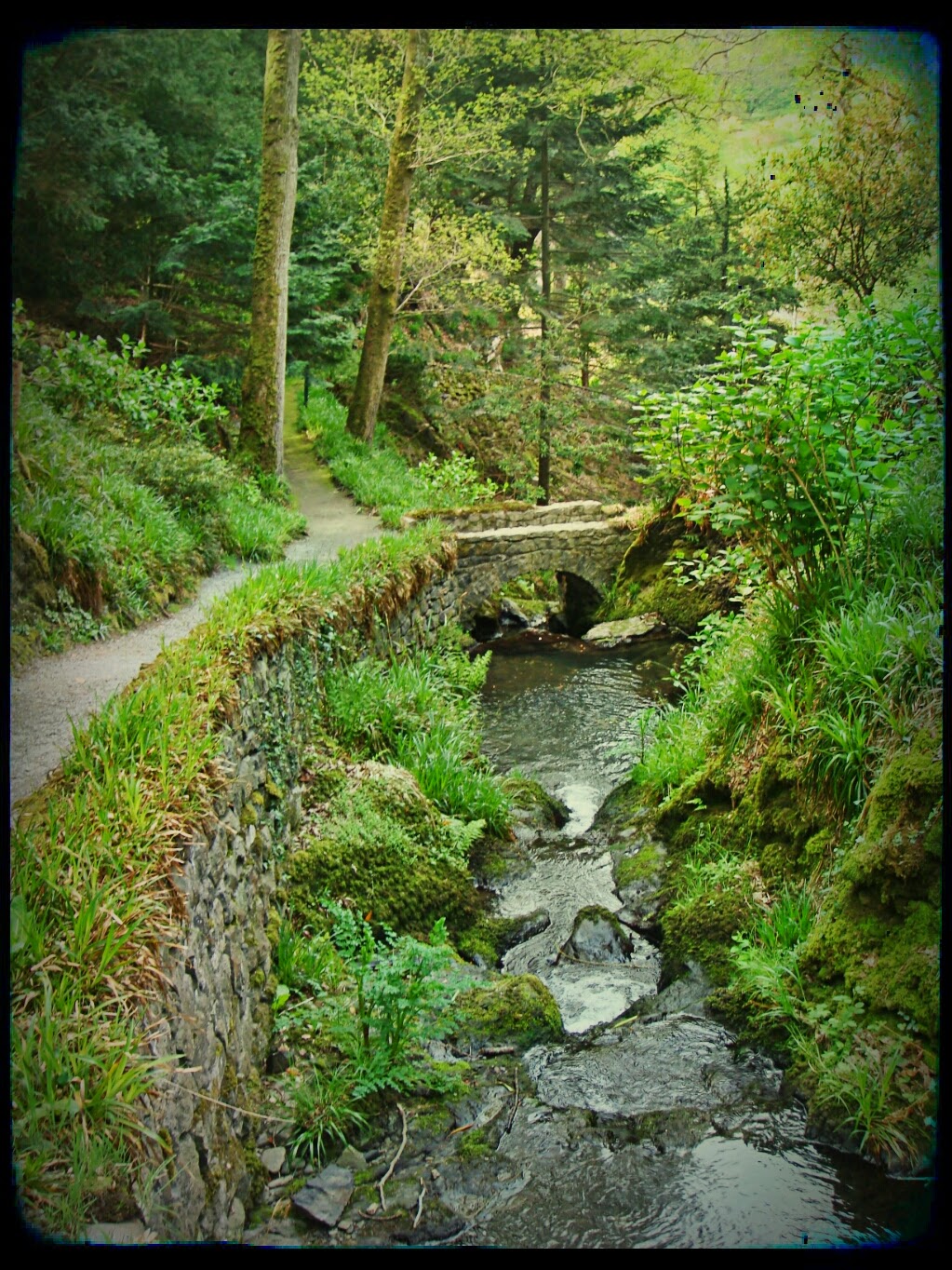 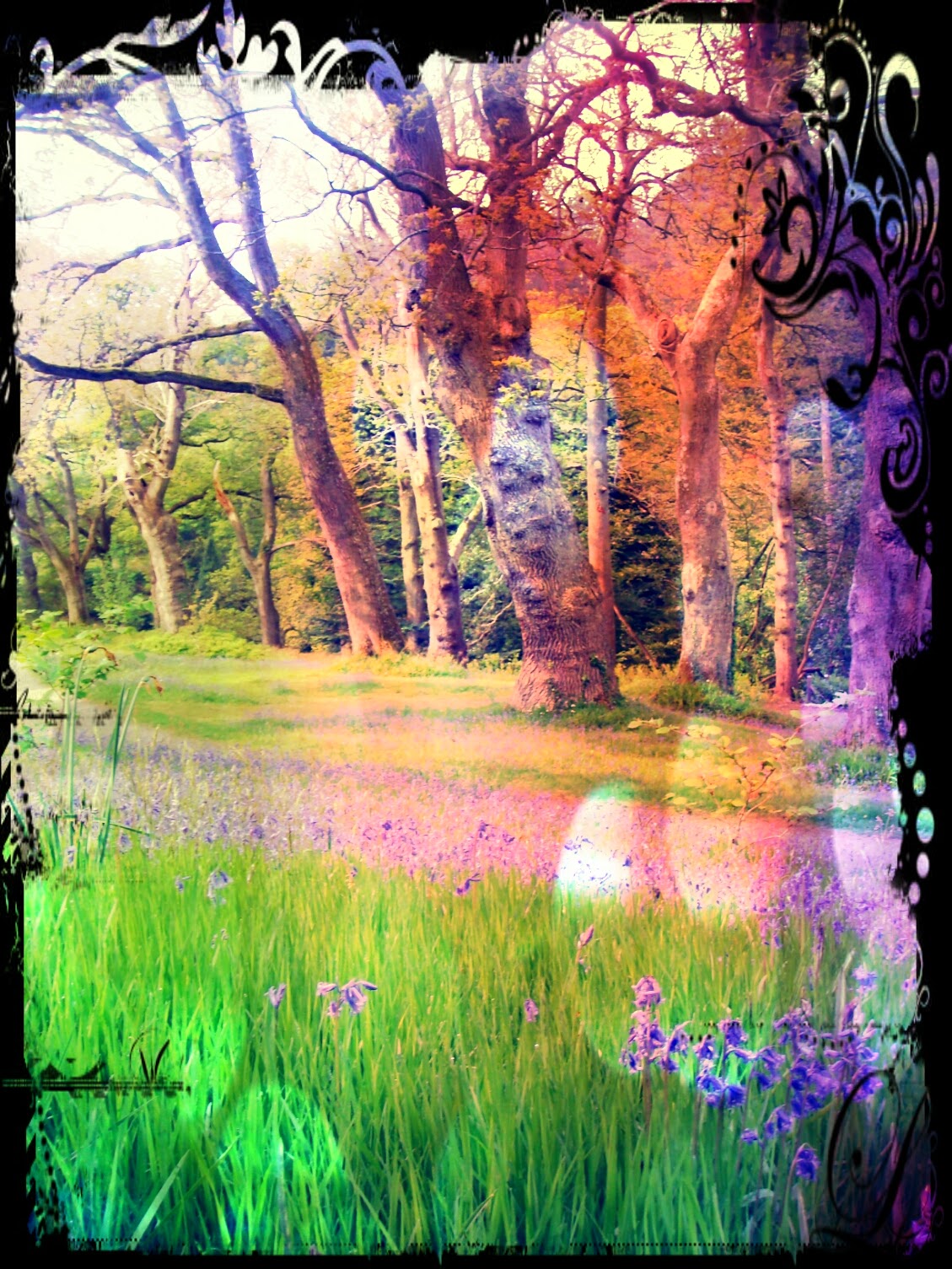 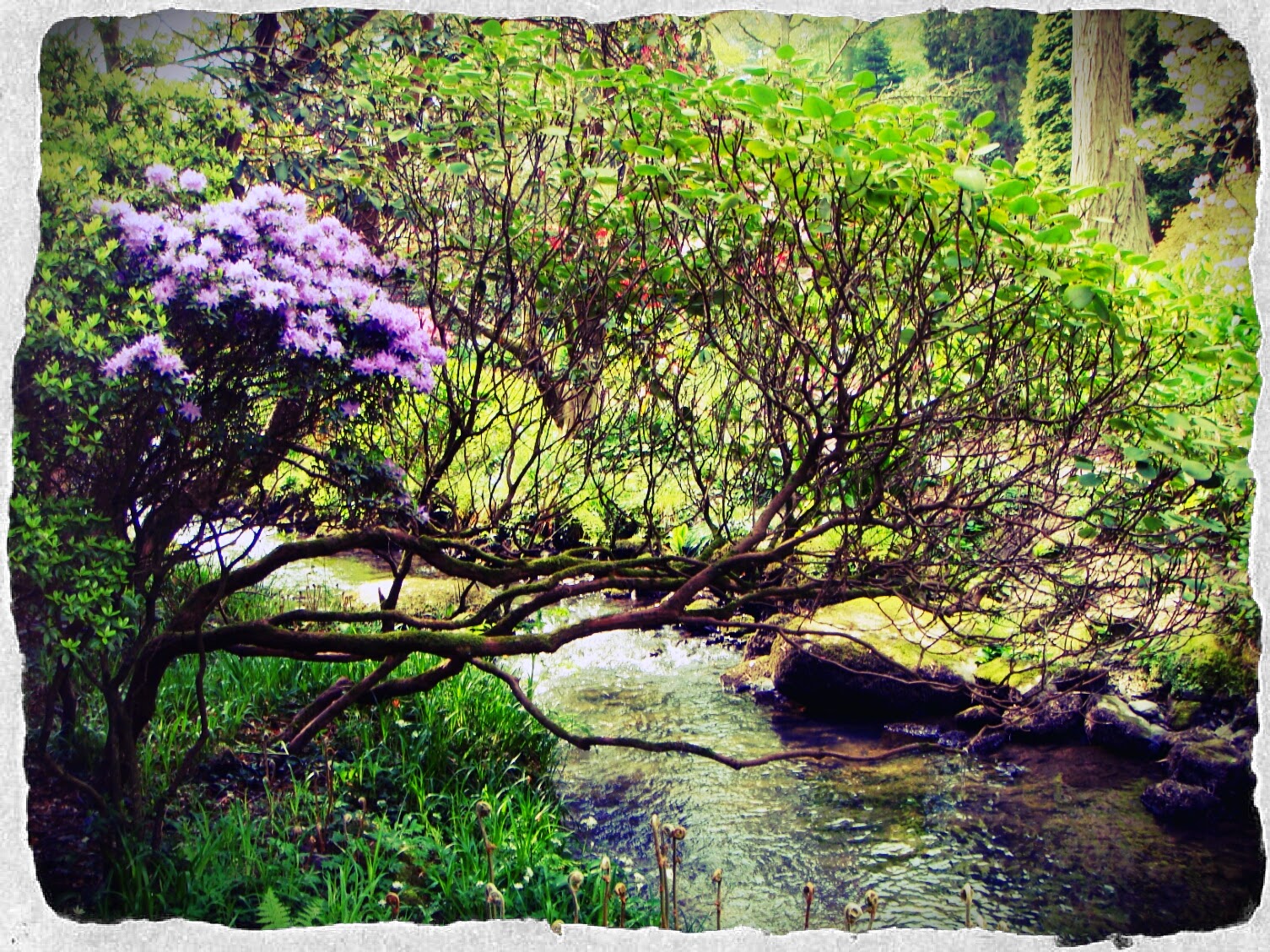 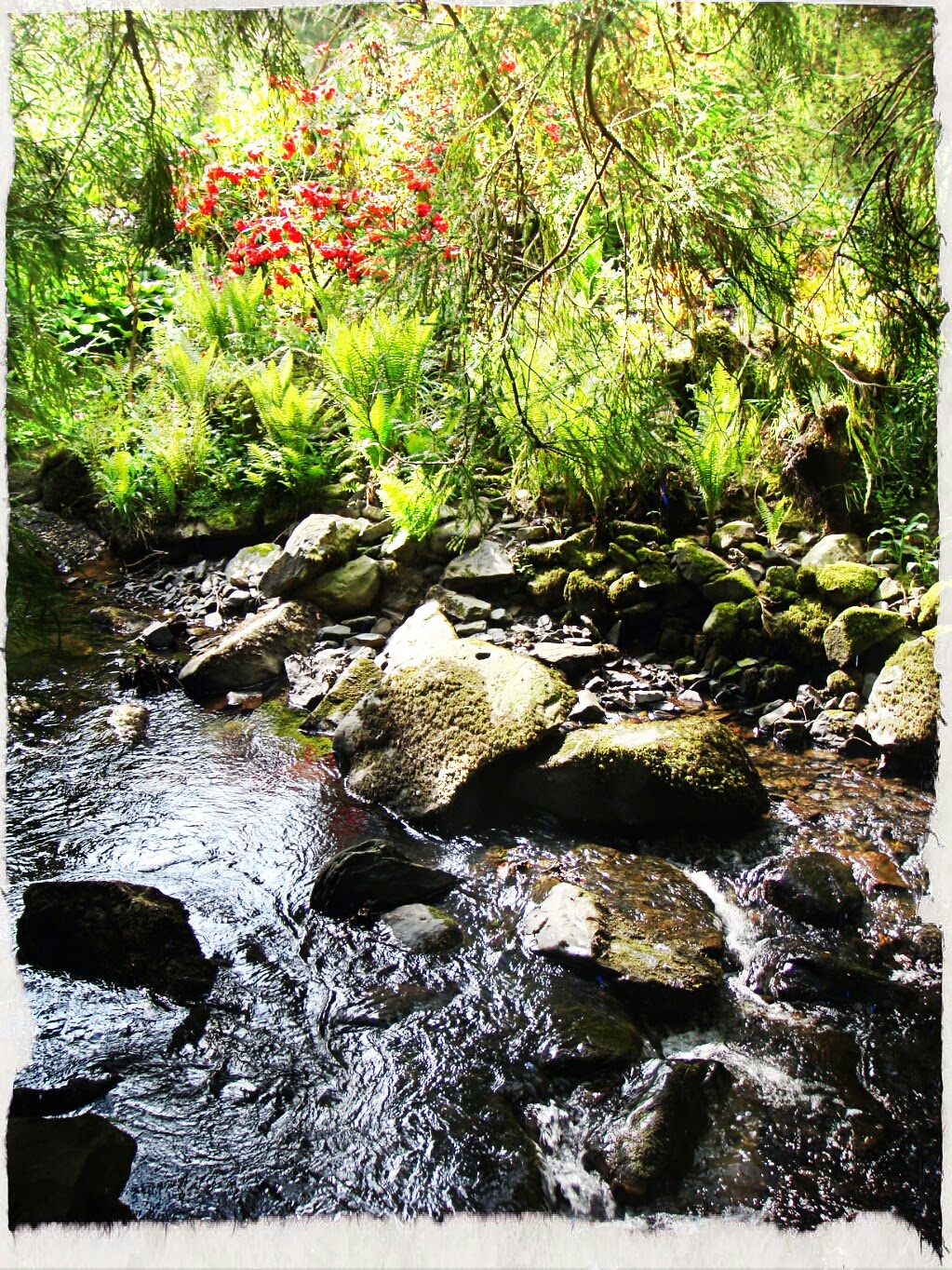 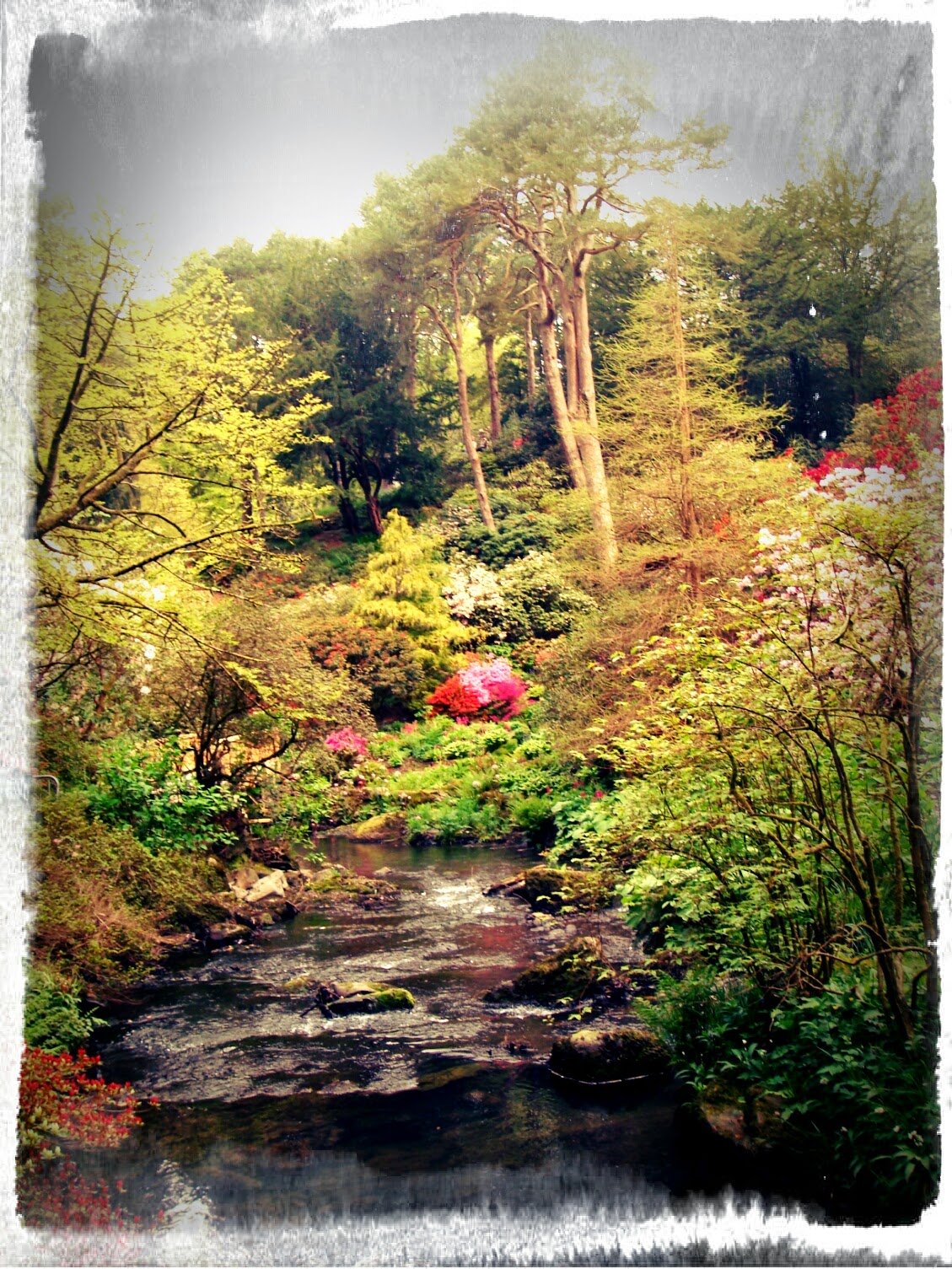 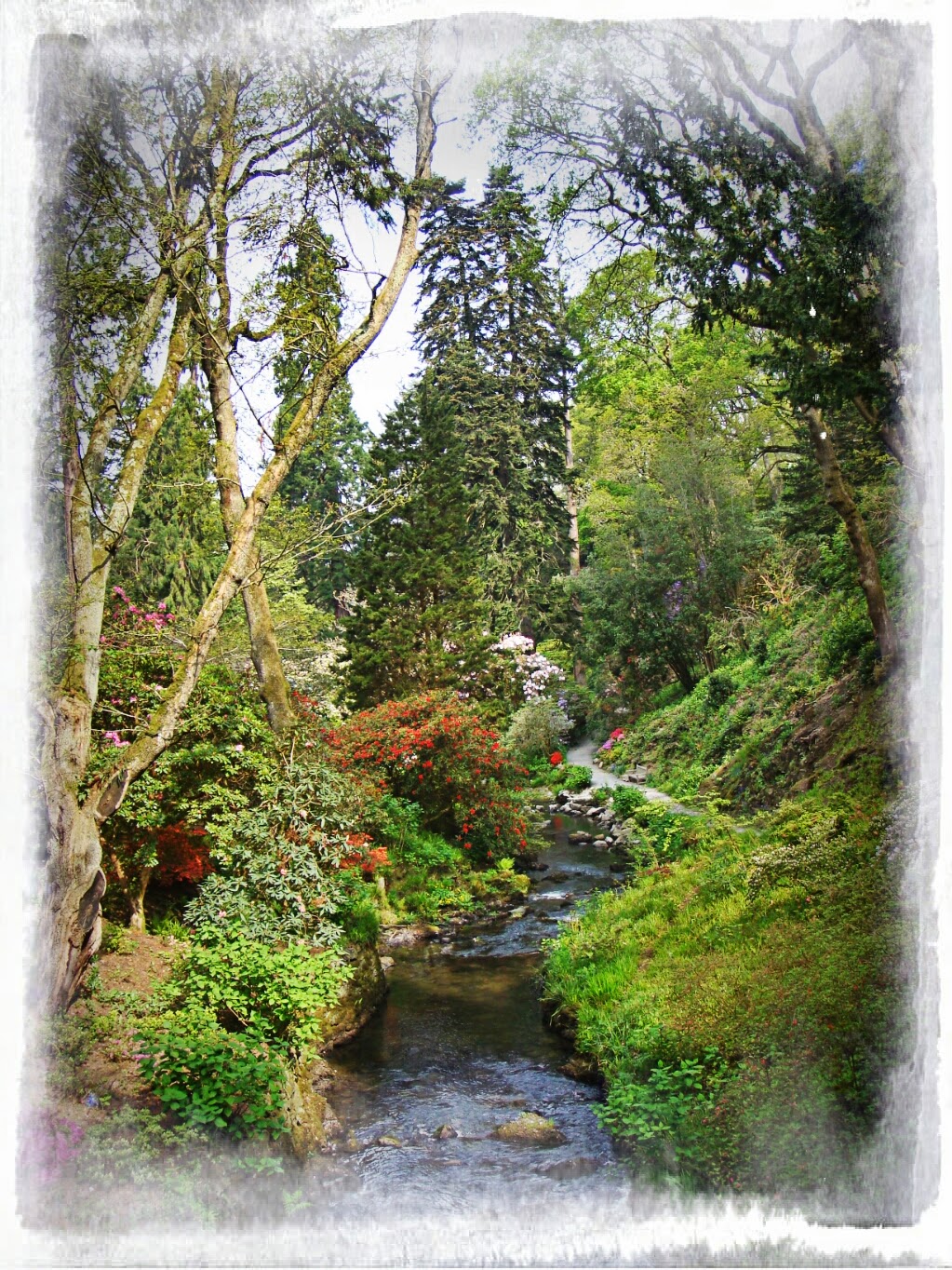 Then it flows in a small lake, where the conifers and the rhododendrums mirror themselves, near an old stone mullin no longer in use. 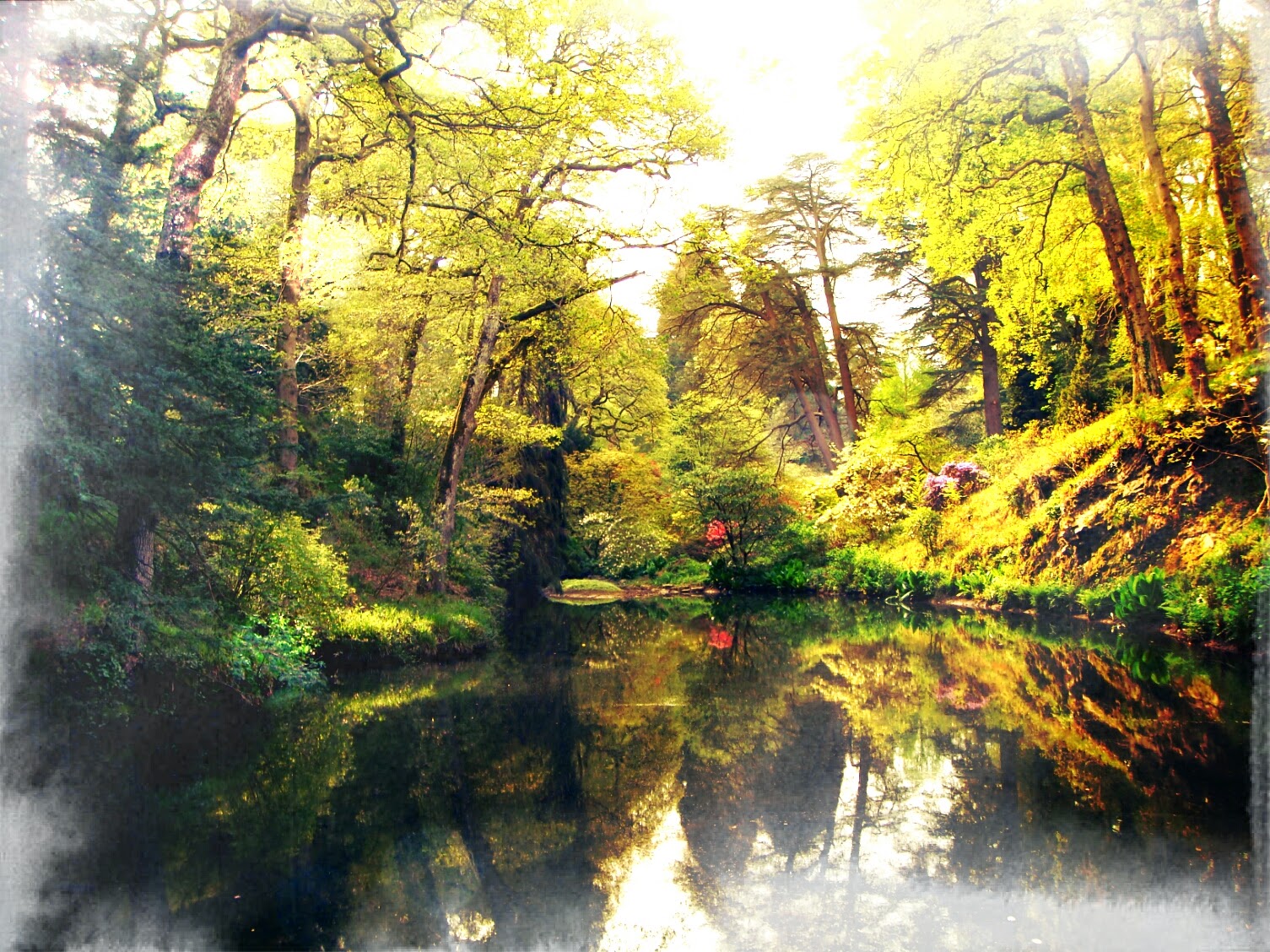 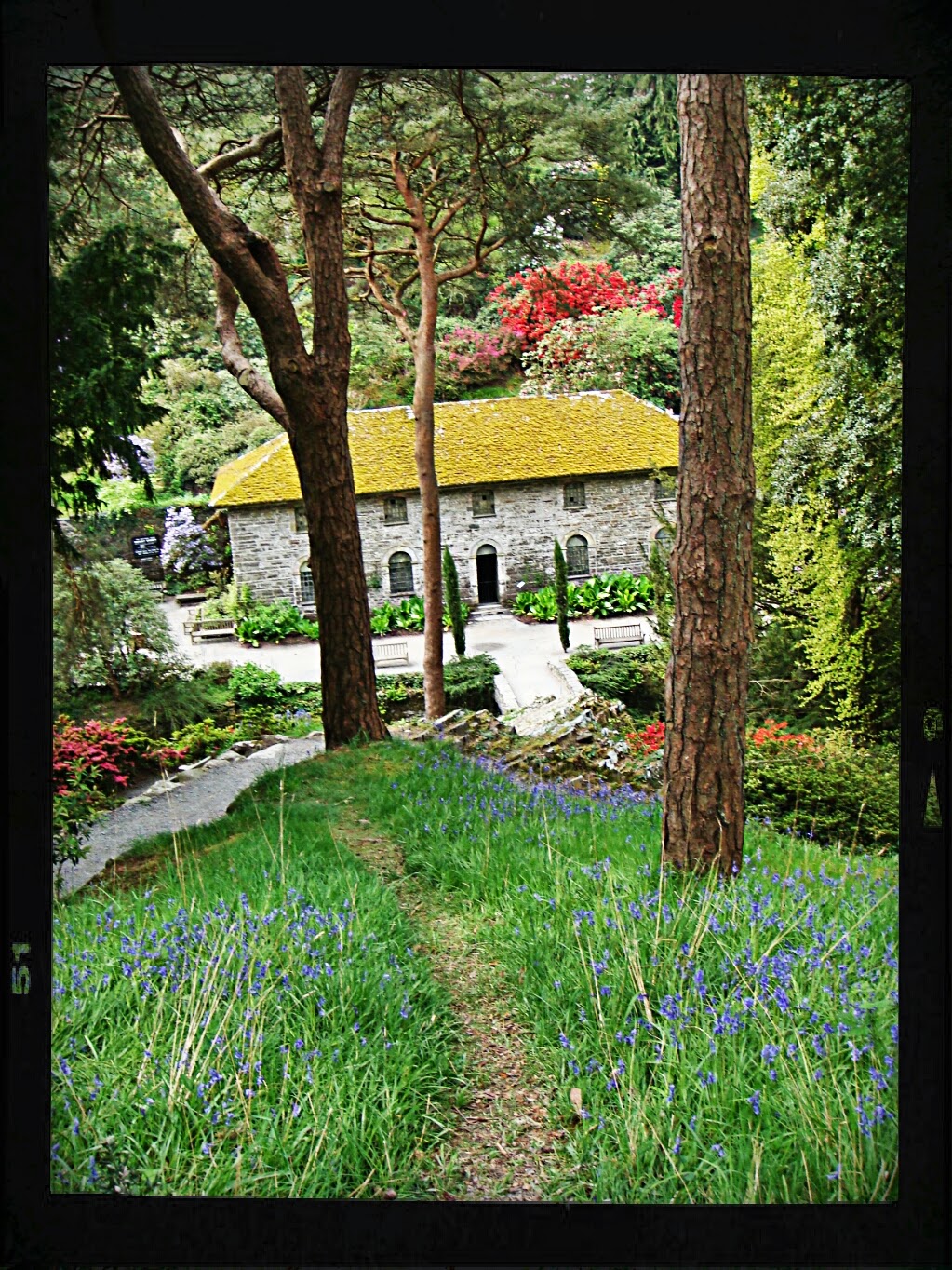 Climbing up, you can find the Italian gardens, with their sculpted grass mantle, the stone pool that in other season will be full of nimpheas, the wooden arcades and two sphinxes in front of one another, who don't look each other in the eyes. 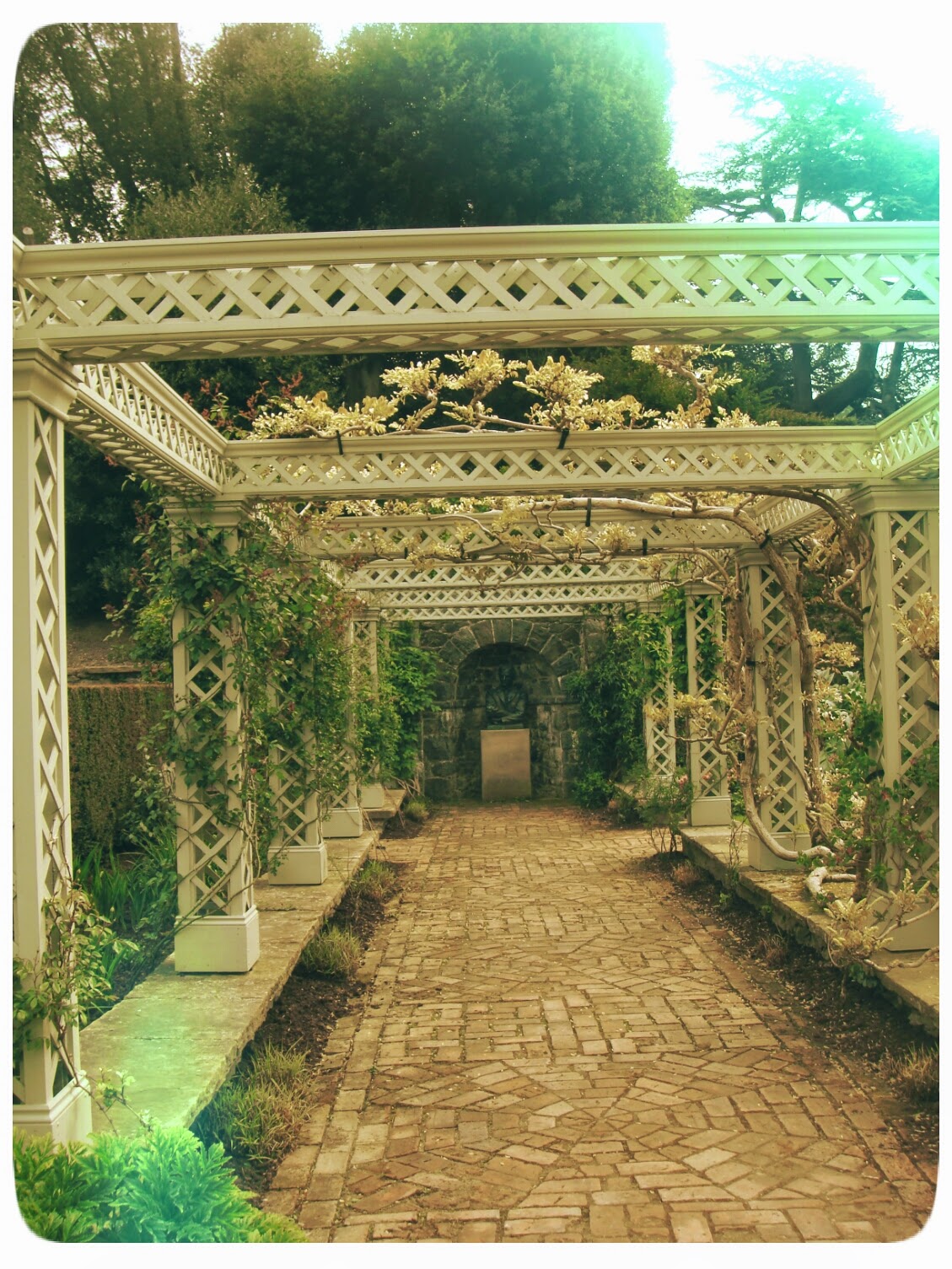 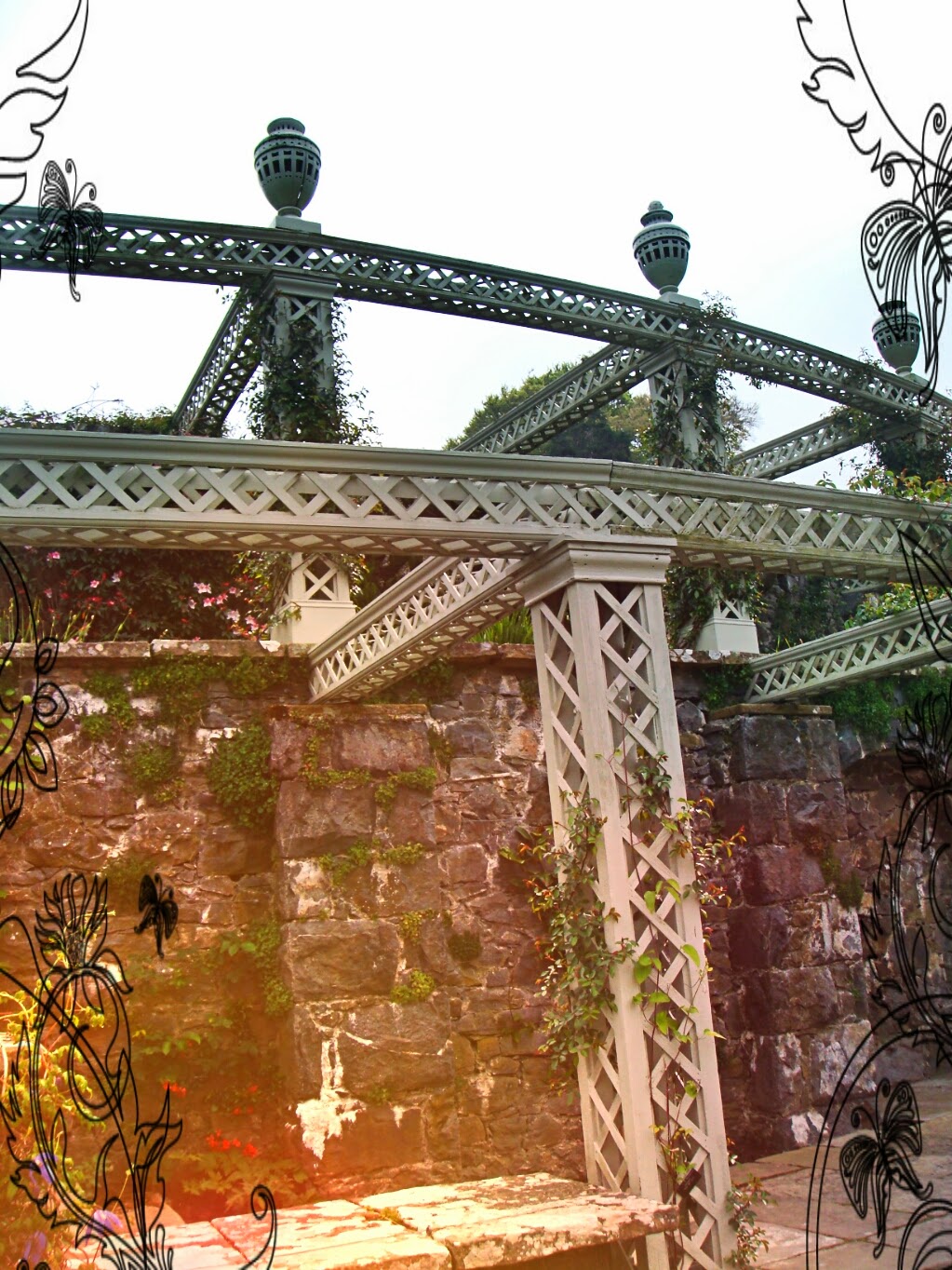 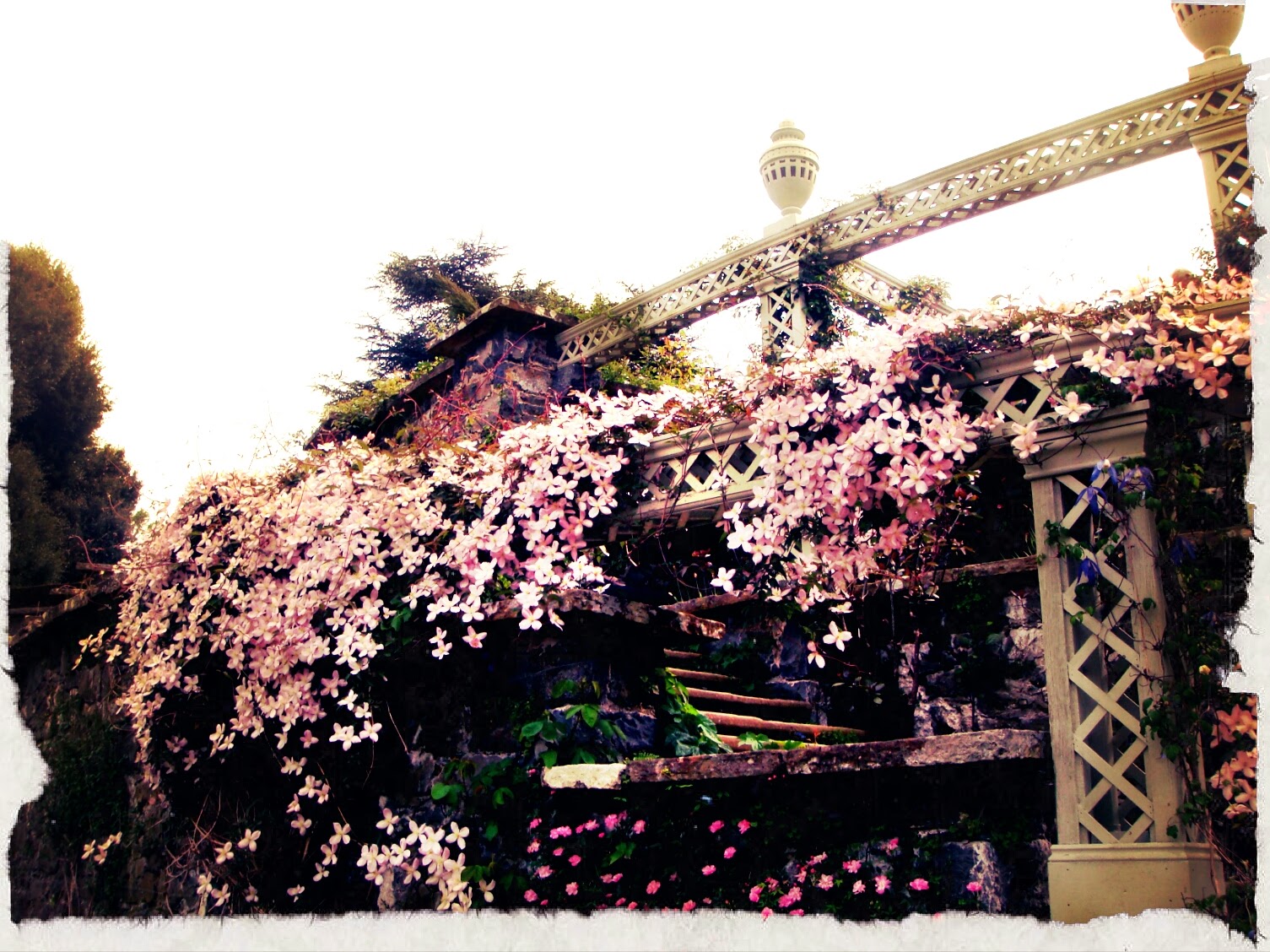 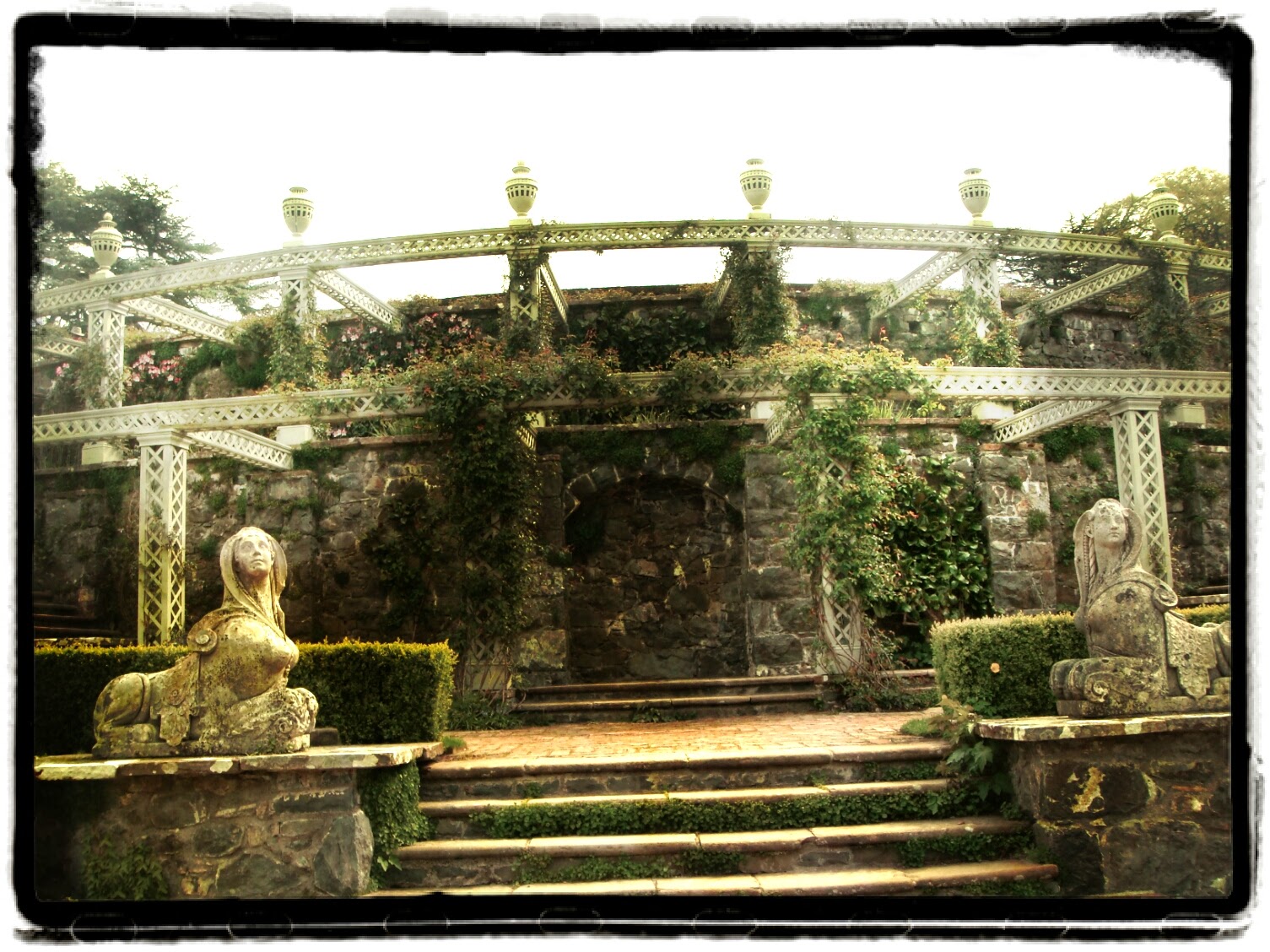 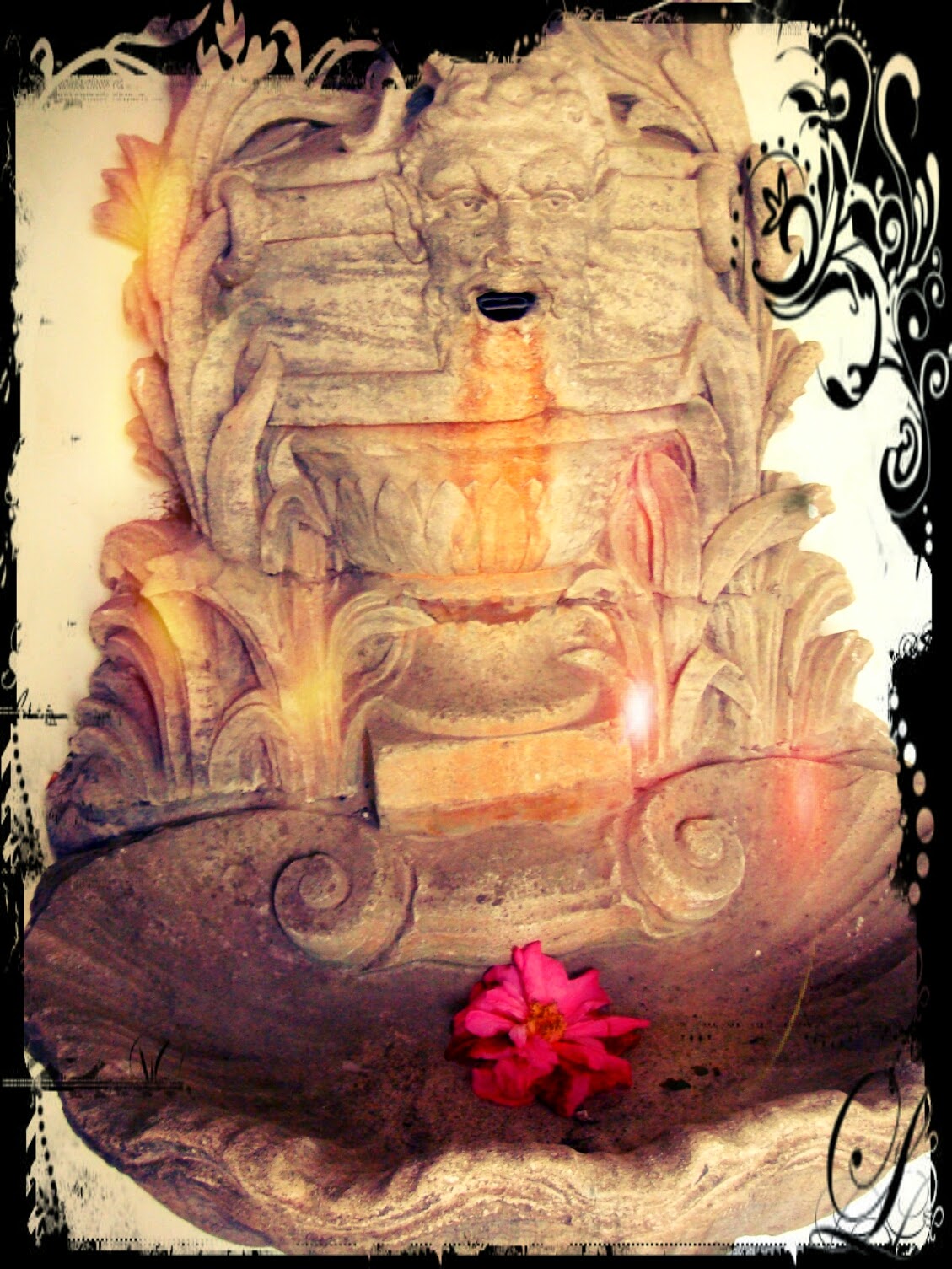 From here you can dominate the rest of the garden, its wilder and bosky part, and from here you are being dominated by the villa, that rises upon everything else. 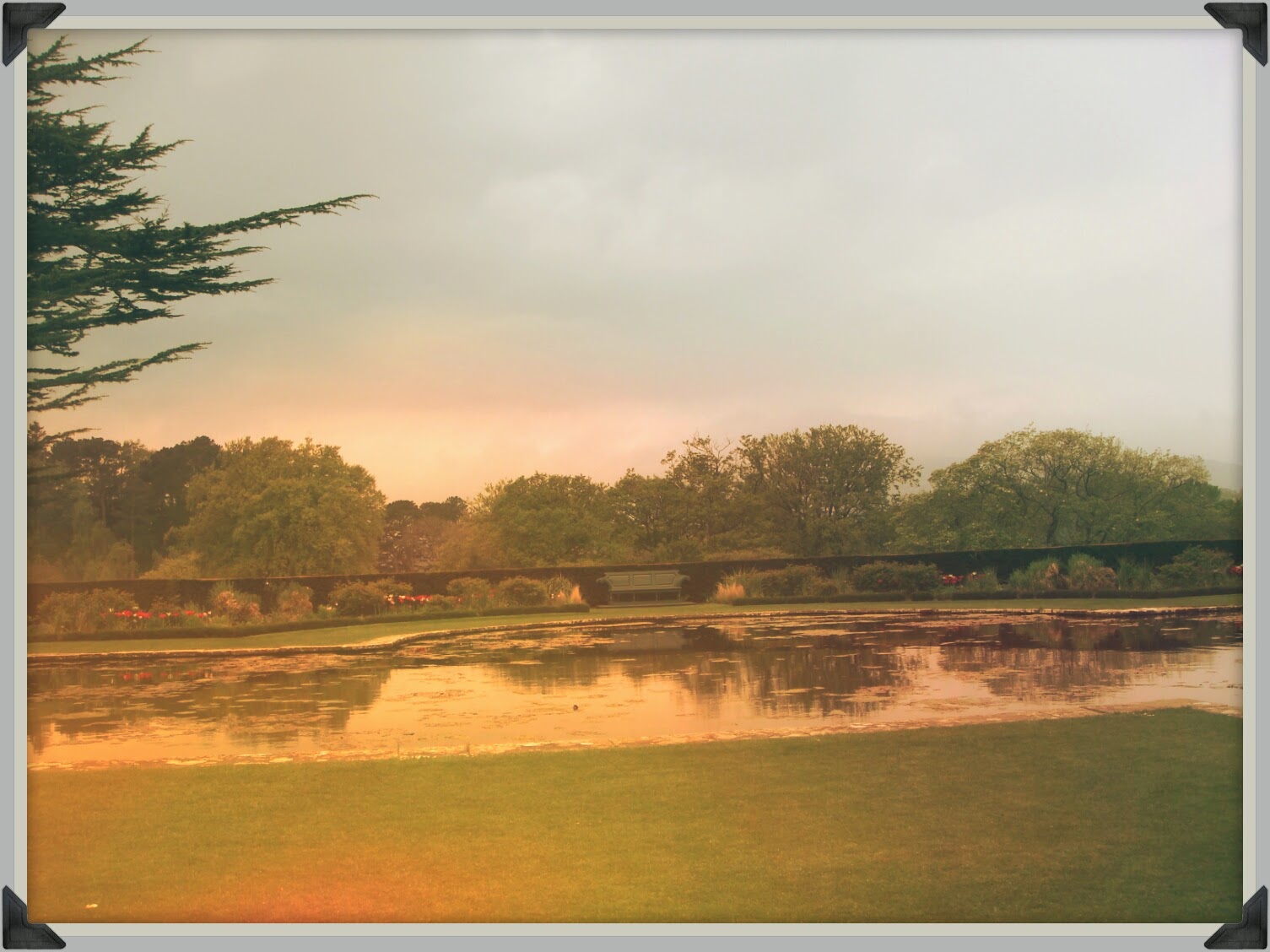 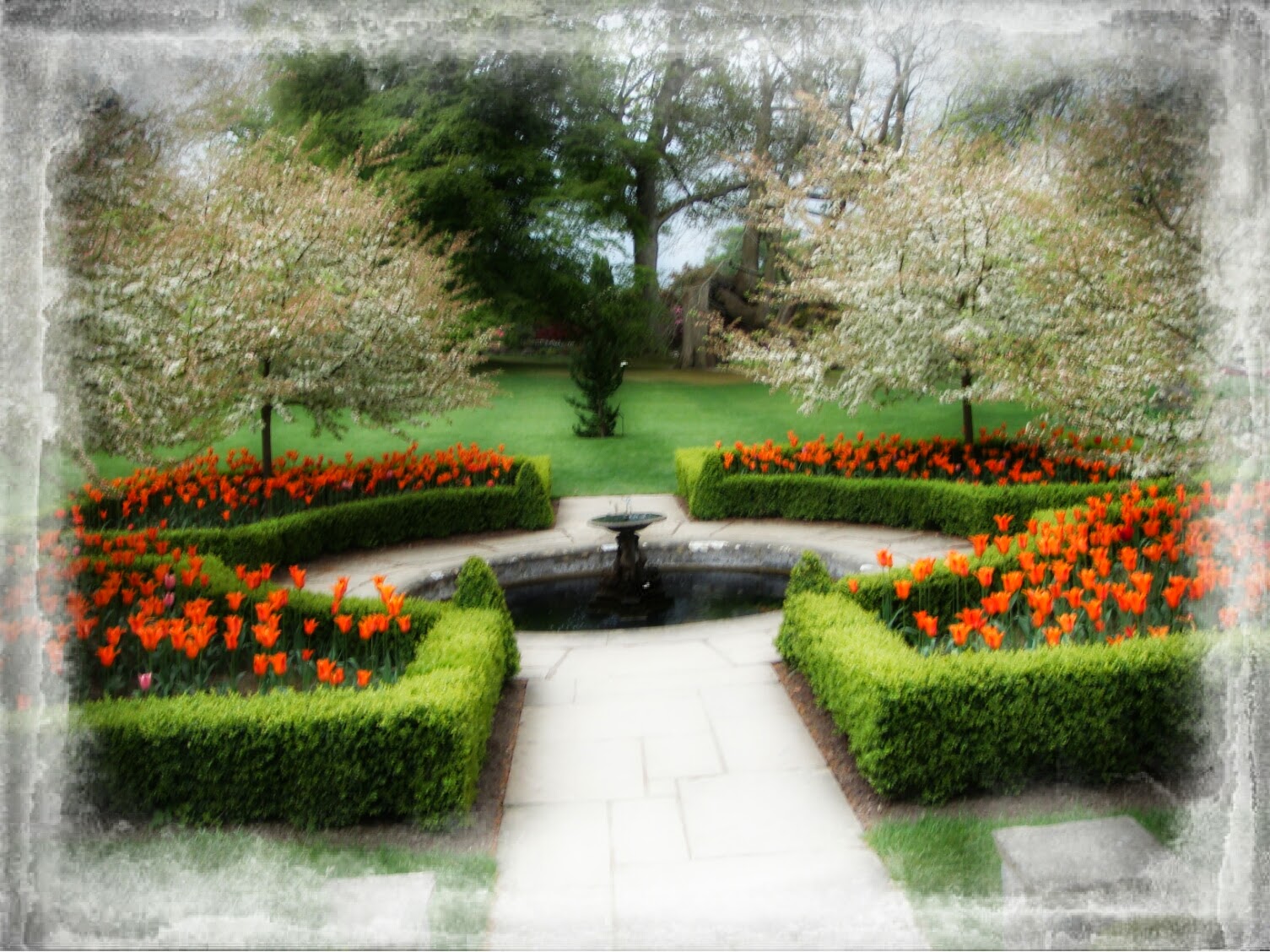 At this point the visit should be over... but we wanted to tour it again a second time, and then a third one.
Bodnant Garden is not only an enchanting place, but it's also timeless.
It's a place that feels like a novel, and it talks about well-kept secrets, love's declarations and fantasy games of a lonely little girl.
It's a place that has belonged to a part of me that I didn't even know I had, and that here, for a while, I've been able to find again..