Remember how I told you yesterday that I should start to take some lessons on how to learn to slow down a bit my crazy march of the beauty of Paris, as the fatigue was beginning to take its toll?
Well, now I would have liked to write something type "Nah, after a night of restful sleep and I am totally reborn and ready to go for a new marathon walking till Versailles!" ... but of course it is not exactly what happened.
Let's say that today my "slowdown" lesson was a must, because I was definitely knackered and sore in almost any part of the body.
So the theme of today's post will be "How to enjoy a day of complete relaxation in Paris" ;-)

Let's say that basically I could not do much else that drag me from one garden to another.

Fortunately, today the sun was shining bright all day, no English Summer Rain (or French, whatever), no sudden showers from the sky.
Hence, the perfect day to enjoy the beginning of spring in the Parisian parks in full bloom. I started with Les Tuileries, also because I wanted to do some shooting with the sun at the Louvre, as a comparison to those made ​​with the rain ... 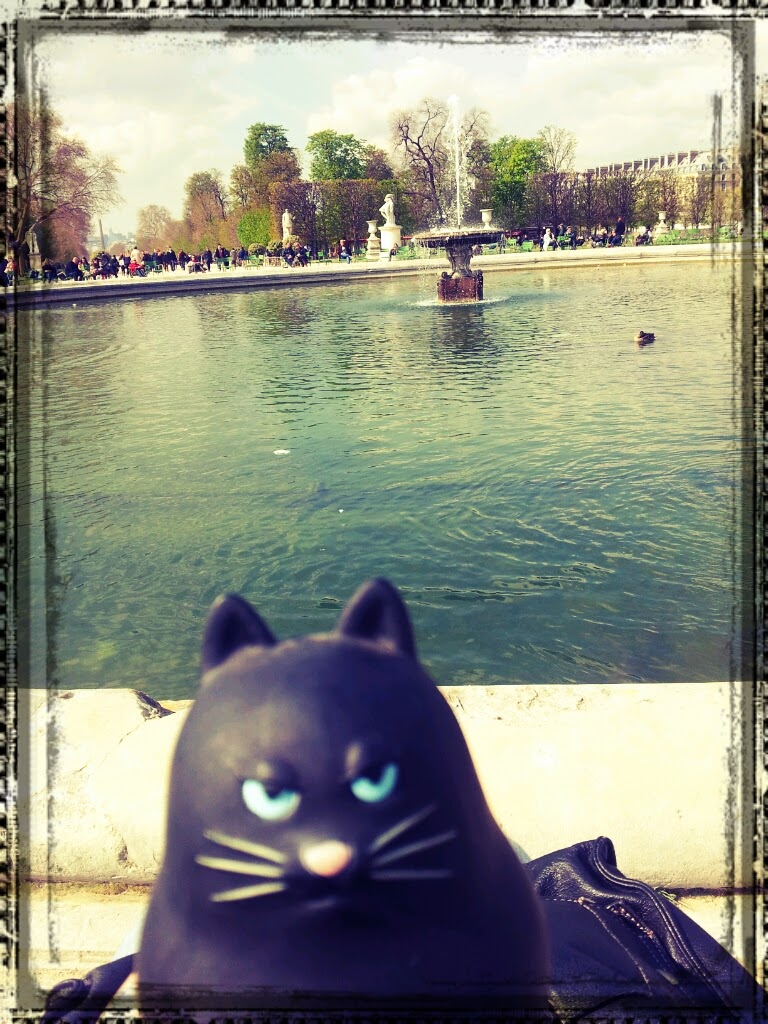 I must confess that with the rain it was kinda better.
Perhaps because (obviously) there was an endless queue in front of the Pyramid and the square was more crowded than the Milan subway at rush hour.
(Though of course is always more pleasant and elegant of the Milan metro) 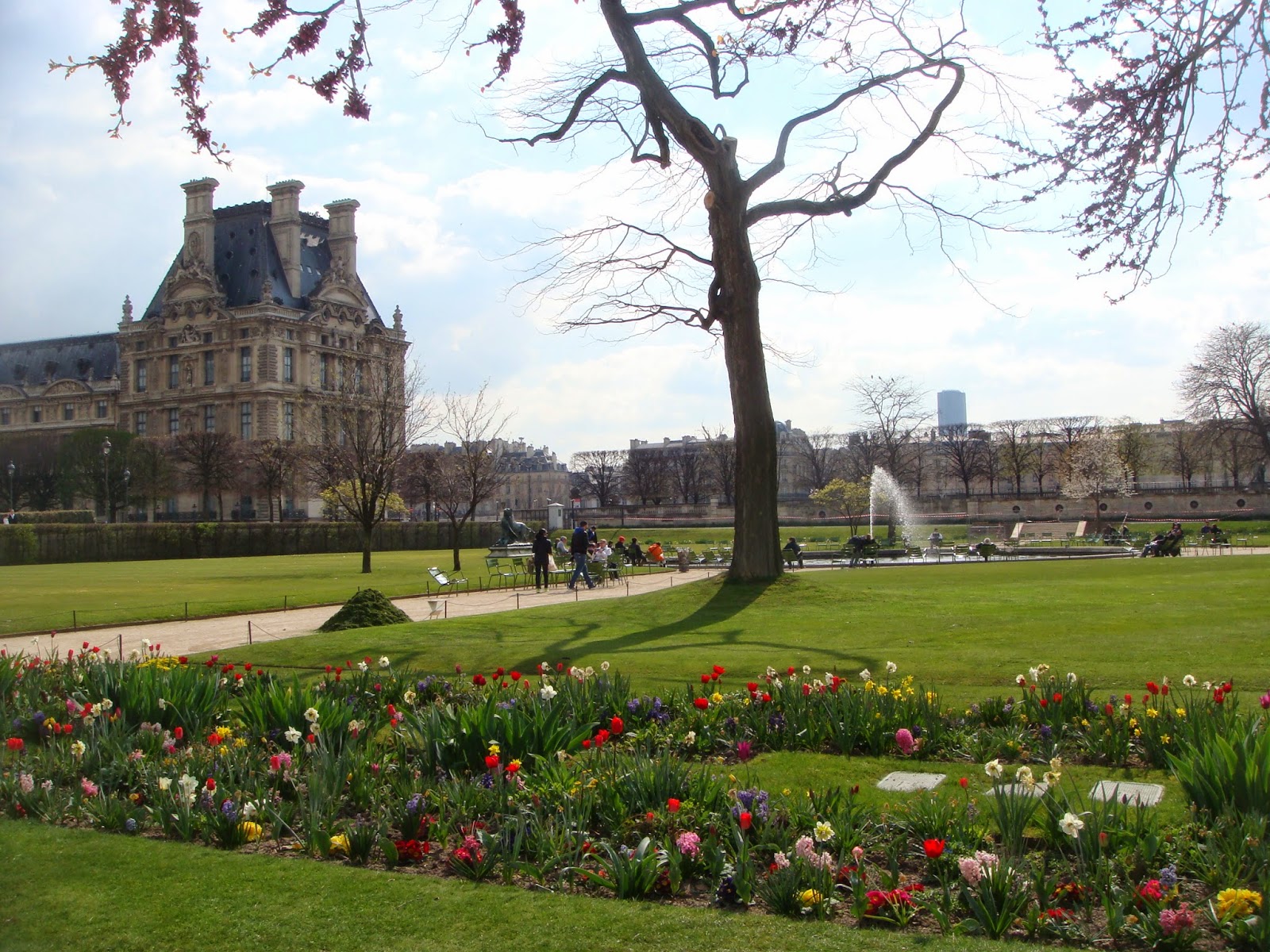 I also make another confession: I had much higher expectation towards Tuleries. 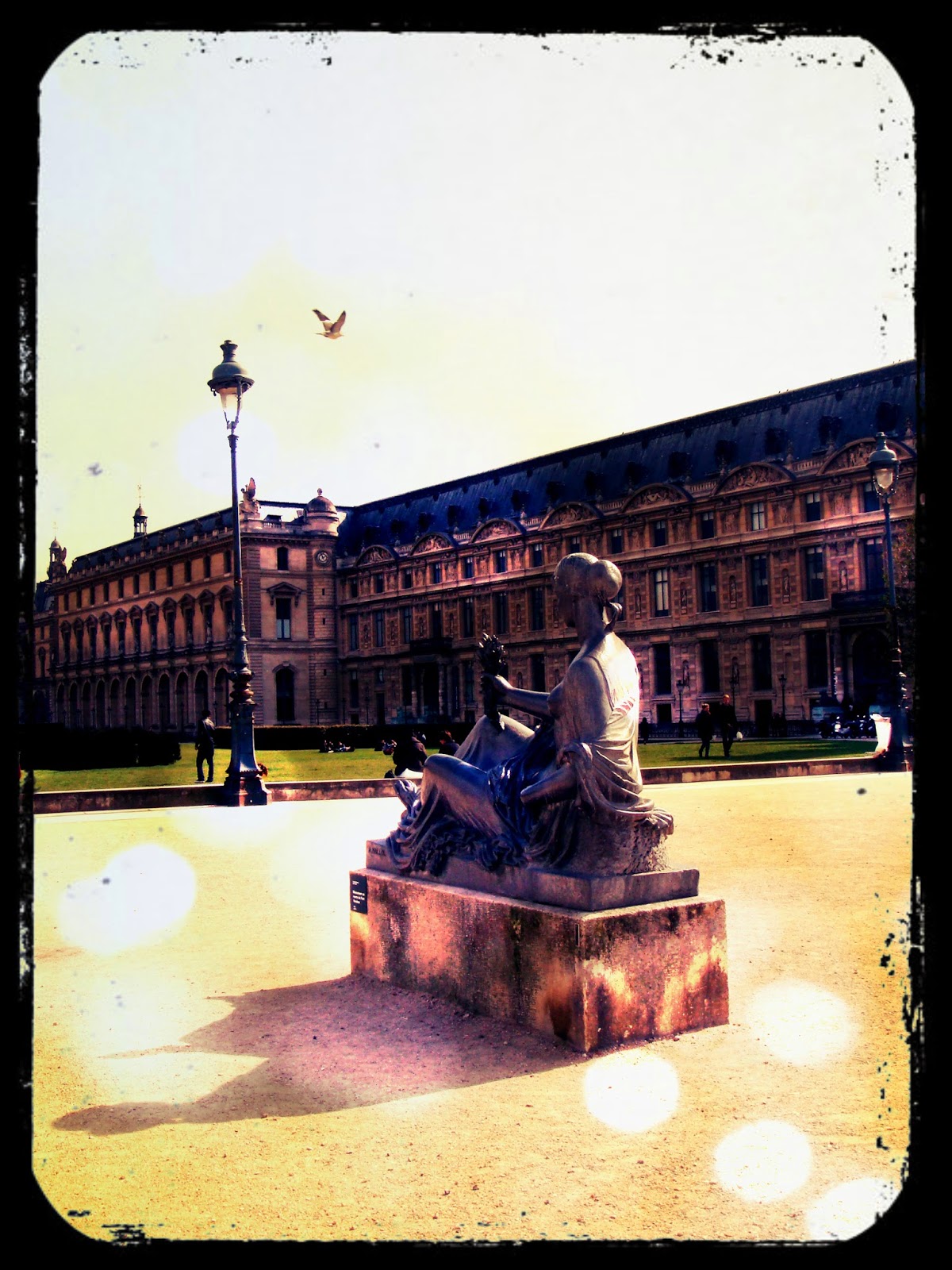 Do not get me wrong: it is a masterpiece of green, with its geometric tree-lined boulevards and the Louvre in the background, but ...


Well, basically my expectation was not really "higher", it's was just about something different.
And that's because my memory did a little misfiring. 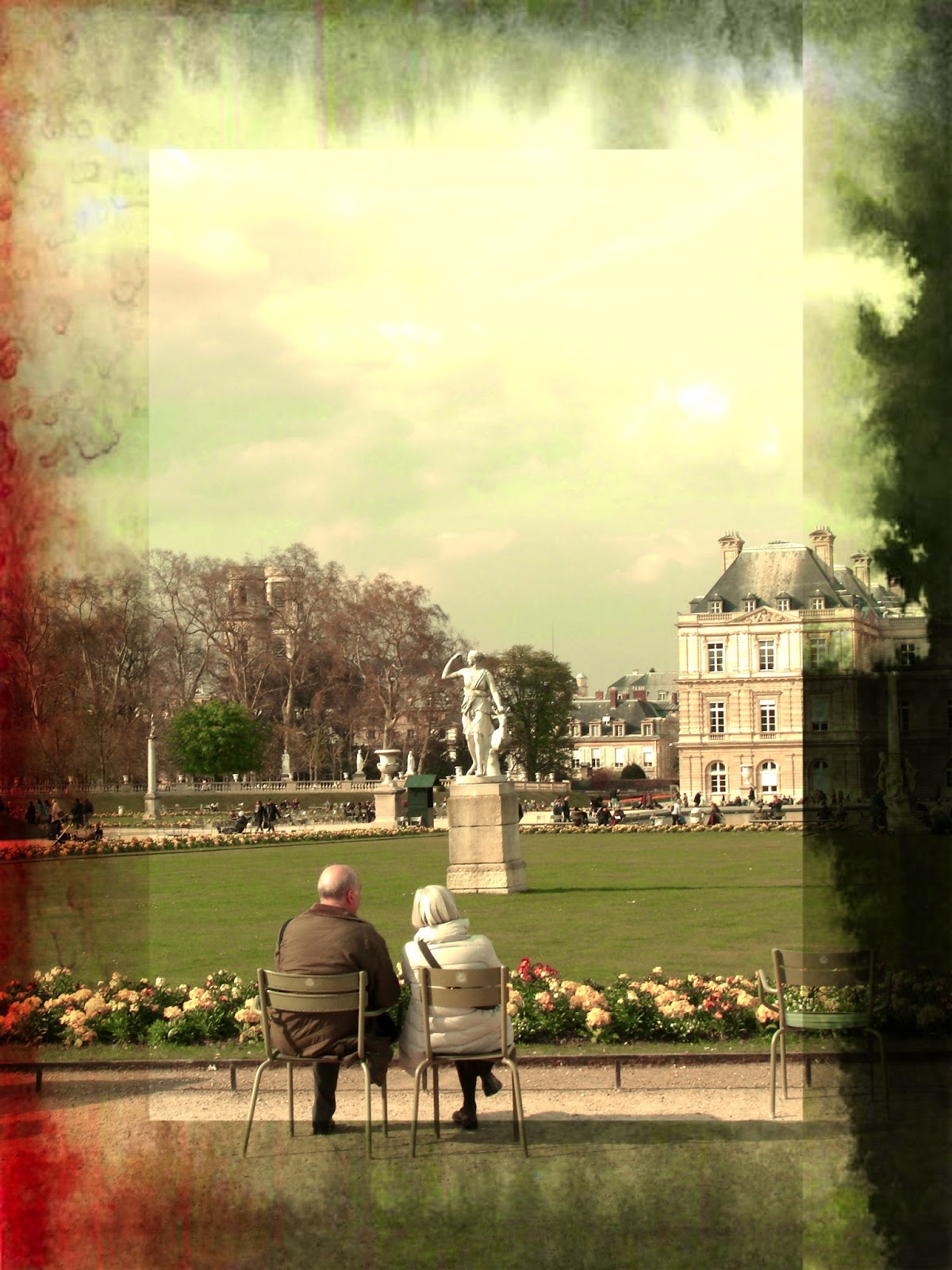 In fact, I remember I had this vision of a lush corner made ​​of greenery and shade, with a classic style fountain covered with moss and some beautiful yellow and red flower beds ... and my whining legs were insisting they just wanted to go there to have their relax.
Almost immediately I realized that the place where I had this memory was not Les Tuileries but the Jardin du Luxembourg , so I said to my grumpy legs to make one last effort and drag me till there, since apparently laying down at the Tuileries wasn't appealing enough for them. 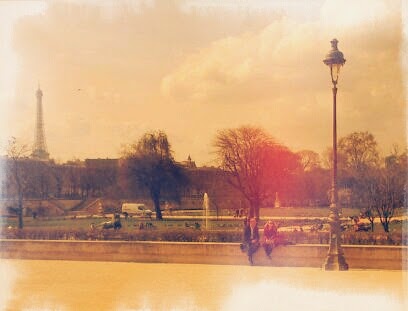 Once there, my legs & me, headed out to hit safely that famous corner that my memory had made ​​idyllic, and that actually appeared quite appropriate for a little well-deserved rest.
So we stayed there a couple hours, collapsing on a chair and not really doing anything else but contemplating the spring in bloom.
And mind you, that it is not for poetic license that I am referring to my legs as if they were a separate entity from me: on that moment I totally felt this way, since they were seriously beginning to get rebellious ... and ok, we are in Paris, which is the revolutionary city by definition, but I did not want to see them erect barricades and send me to the guillotine.

Since their riotous grumbling was still going on, I decided to take the "luxury" of a subway trip - although I must confess that I wasn't much more relaxing than walking, being so crammed as we were (still better than Milan, anyway) .
Naively I thought that, being on Monday, the Champs Elysées could have been on the verge of desertification, but the density of the crowd was comparable to that seen exactly in front of the Louvre and the one experienced in the metro - so, also because of the threats of my legs, I decided to give up on it after just a couple of blocks, since my interest in designer clothes is equal to that of the girl from "The Devil Wears Prada" (before she gets transformed by the evil Miranda, of course).
I even gave up on their Luxury Toilet : I do not doubt that it is "the cleanest city center" as proclaimed in large and fuchsia characters, but, honestly, 2 euro to pee seemed to me a kind of theft.
Besides - if it is the cleanest "center" mean that in the suburbs there are far more bathrooms clean? ... In any case, it was rather peculiar to admire the collection of artistics toilet seats displayed on the walls of the corridor route that leads you there.

But definitely the best-relaxation time of the day was having lunch at the Café des Chats [ 16, rue Michel Lecomte ]!
With my great joy the cat cafes (eating places that include cuddly feline presence, which in the Far East has been already in vogue for some years) is also gaining ground in Europe, and, waiting for Torino's one to be opened, I couldn't really miss trying the Parisian one. 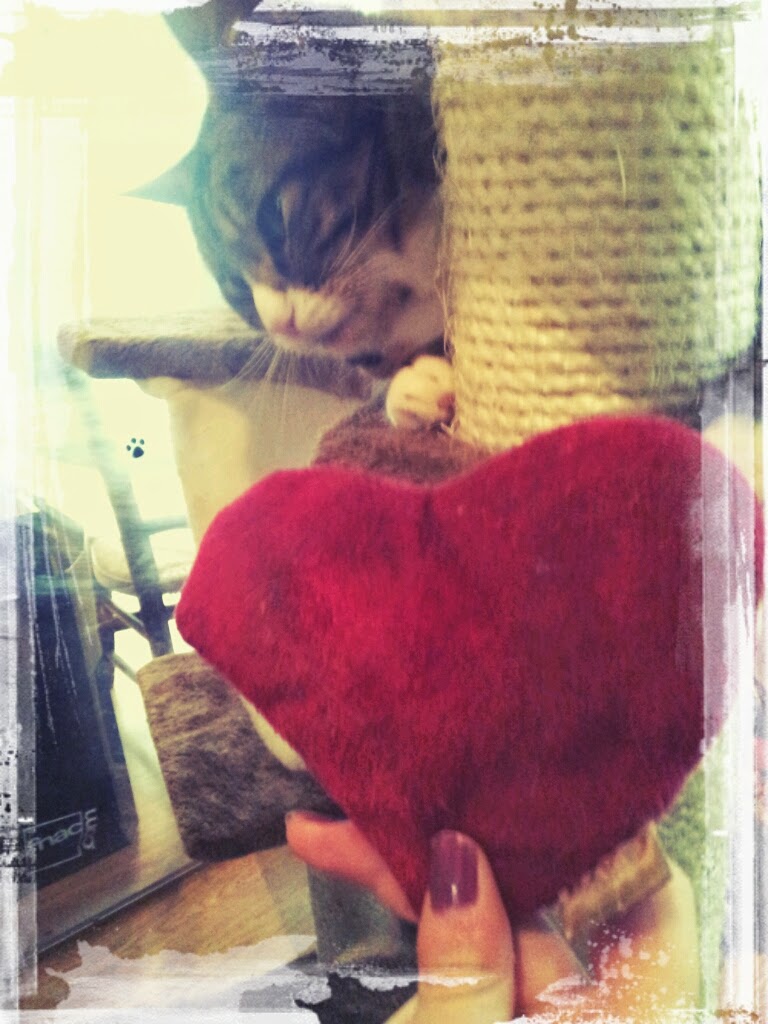 The cat-café is located in the Marais, opens at midday and at 10 to twelve there were already a dozen people waiting outside.
So I would recommend booking (you can also do it online ), especially if you are not planning to rush there as soon as it opens like I did.
I had not booked, but luckily I managed to find a place anyway. 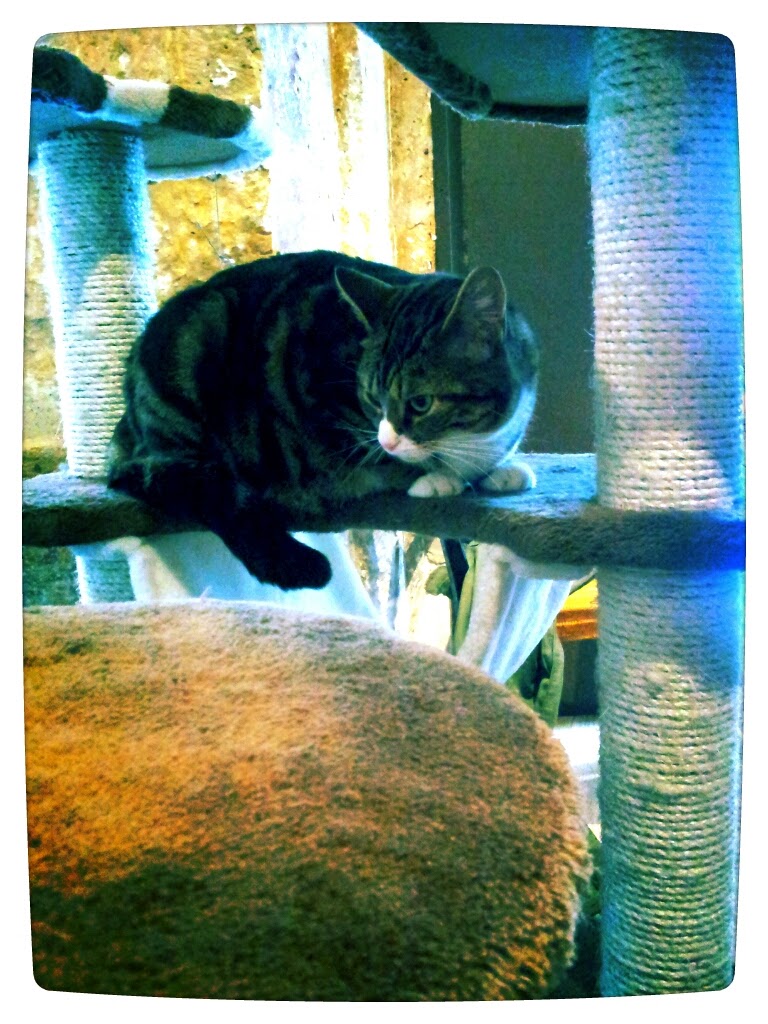 At the entrance are being explained the rules of behaviour that are necessary to ensure the well-being of the cats: you can not feed them (some foods that are delicious for us are toxic for them), they can not be photographed with the flash (which might scare them or, worse, damage their retina) and they can not be forced to get pampered / picked up if they don't want to.
And the latter is obviously a rule that every human being who has the luck to be part of the staff of a cat (as you well know, dogs have owners, cats have staff) is well aware: the cat is a diva who decides by himself how, when and if allow you.
But we fans are happily content anyway even just to admire them from afar. 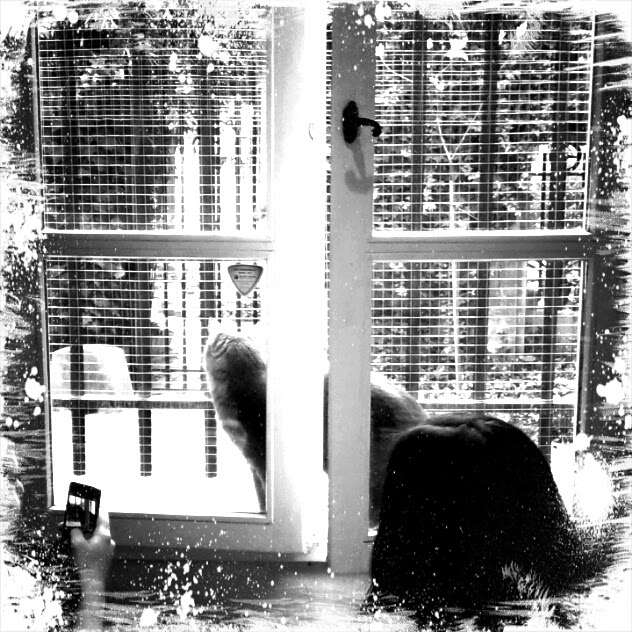 This is not the case of Café's cats, though, that were quite sociable and affectionate.
As soon as me and the other humans in queue had settled into the room, the stars made ​​their entrance, one by one, in ordet to be better admired. 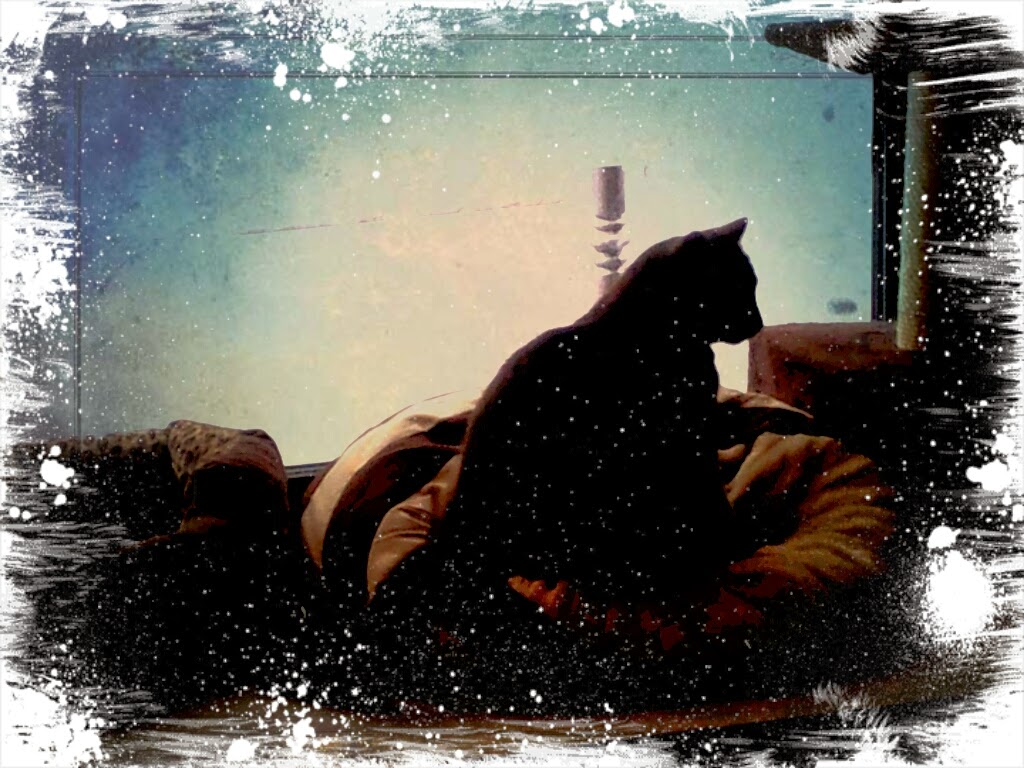 A wonderful chatty Carthusian immediately went to take possession of his basket; a petite and soft tortie went to keep him company; while a shapely white and grey big cat provided an everlasting show on her luxury scratching post castle. 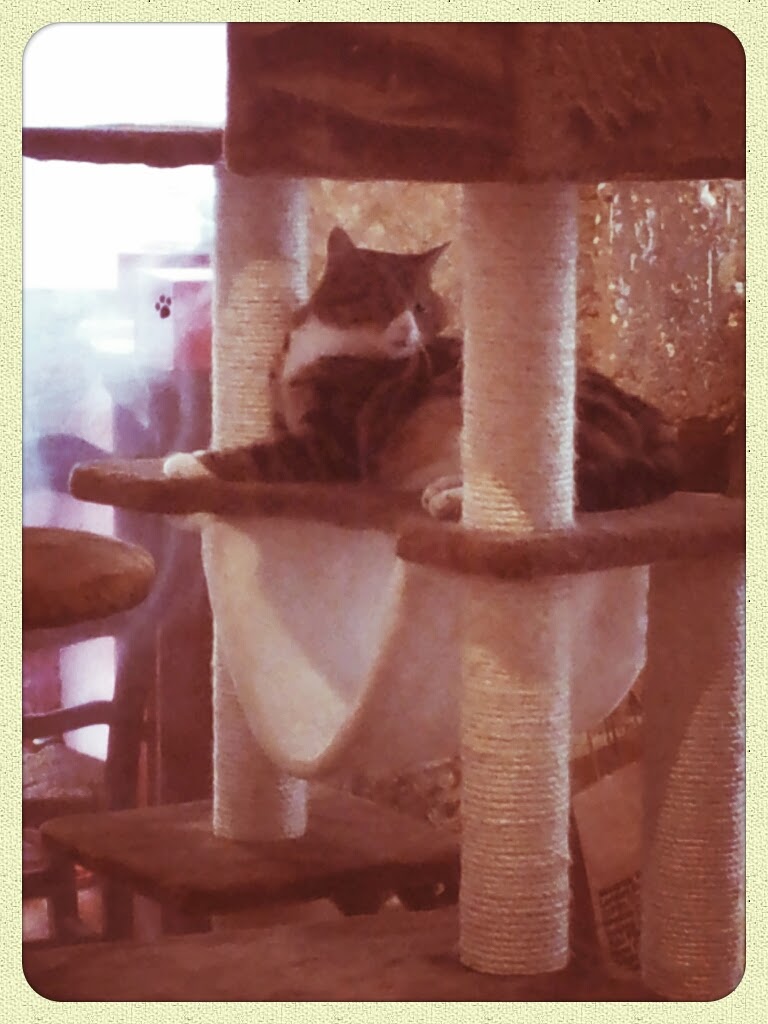 (This, I must say, has sparked some twinge of envy from the cats in my house - oops! from the feline for whom I proudly am an honorary member of their staff; since they have to get content about getting their nails out of a humble tablet - besides on curtains and sofa, of course) 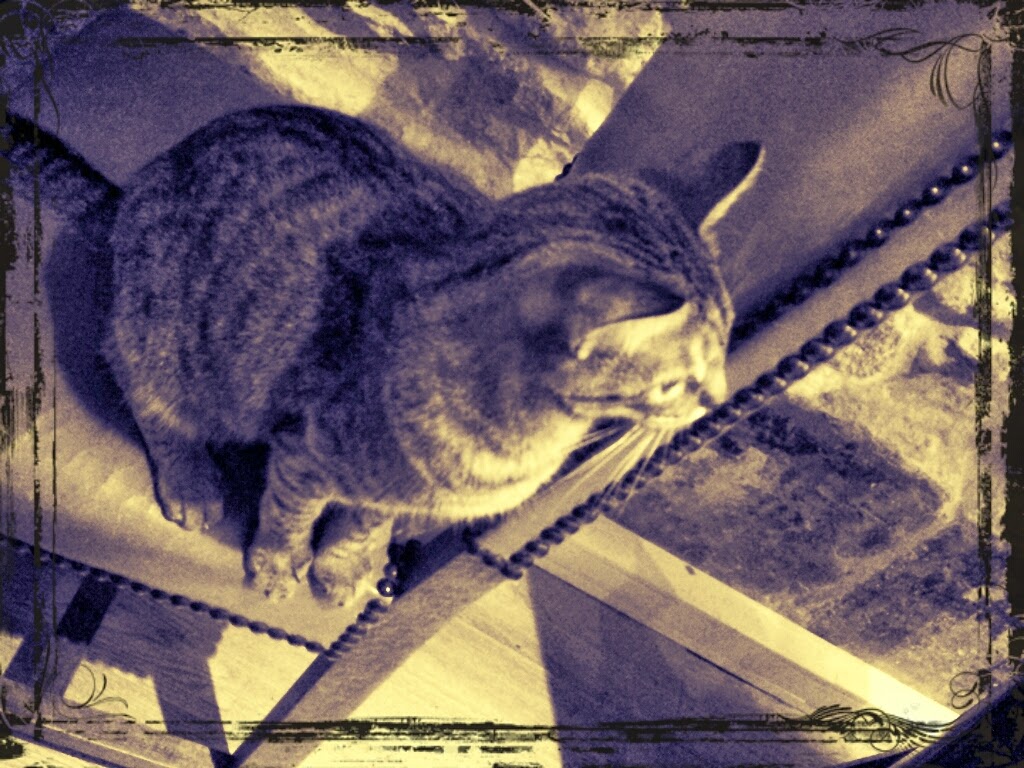 I a very charming guy sitting next to me all the time: a tabby cat named Lovely, who was a true gentleman - at one point he jumped on the table but did not have the slightest intention to be famelic or curious about towards food that I had in the dish.
I was very admired, because when Sirius (the real Black Cat in my house) sees the humans eating, regardless of how and how much he has already been fed, jumps on the table with the tender amount of its 8 kg, but he does that in order to have an olfactory tasting of  what you're eating - regardless if it is something appealing for him or not.
Then he might decide to go straight to the second phase of the tasting...
Lovely instead didn't seem interested in food, he seemed to be there only because he wanted to keep me company.
Aw, I was melting!
Sirius could definitely not be hired at the Café, I guess. ..

Do you want to read more of my days in Paris?
-> Here you will find the tales from the first day : Gothic beauties, dormice in teapots and padlocks of love
-> Some complaints about the second day, but together with the amazing Orsay Museum!
-> You just can not grumble if you are on holiday in Paris! The second day was also full of so many beautiful things , like Montmartre and the Latin Quarter
->  ... and Montmartre deserves a post all to itself: here are my impressions following the footsteps of the maudit poets and Amélie Poulain