There was a song we used to sing when we were kids, which was talking about a black cat king of a cemetery - that's because in Italian it rhymes ("nero" / "cimitero"), and also because that's a good association between two icons from the gothic world, having a gloomy charme.
And so I cannot avoid thinking about its tune, whenever I start writing about cemeteries - and it kinda turns off the solemnity and concentration that I still have impressed from the atmospheare of the place I've just visited.
Anyway, it's an association that totally makes sense, because, also for what concerns myself, being a black cat inside, I've always been somehow bewitched by this kind of places and their maybe a bit creepy but undeniable charme.
Within the last few years, talking with some people, and browsing some sites and blogs, I've found out that, after all, I'm not the only one, and actually the so called "cemeterial tourism" is quite more popular than you may think. 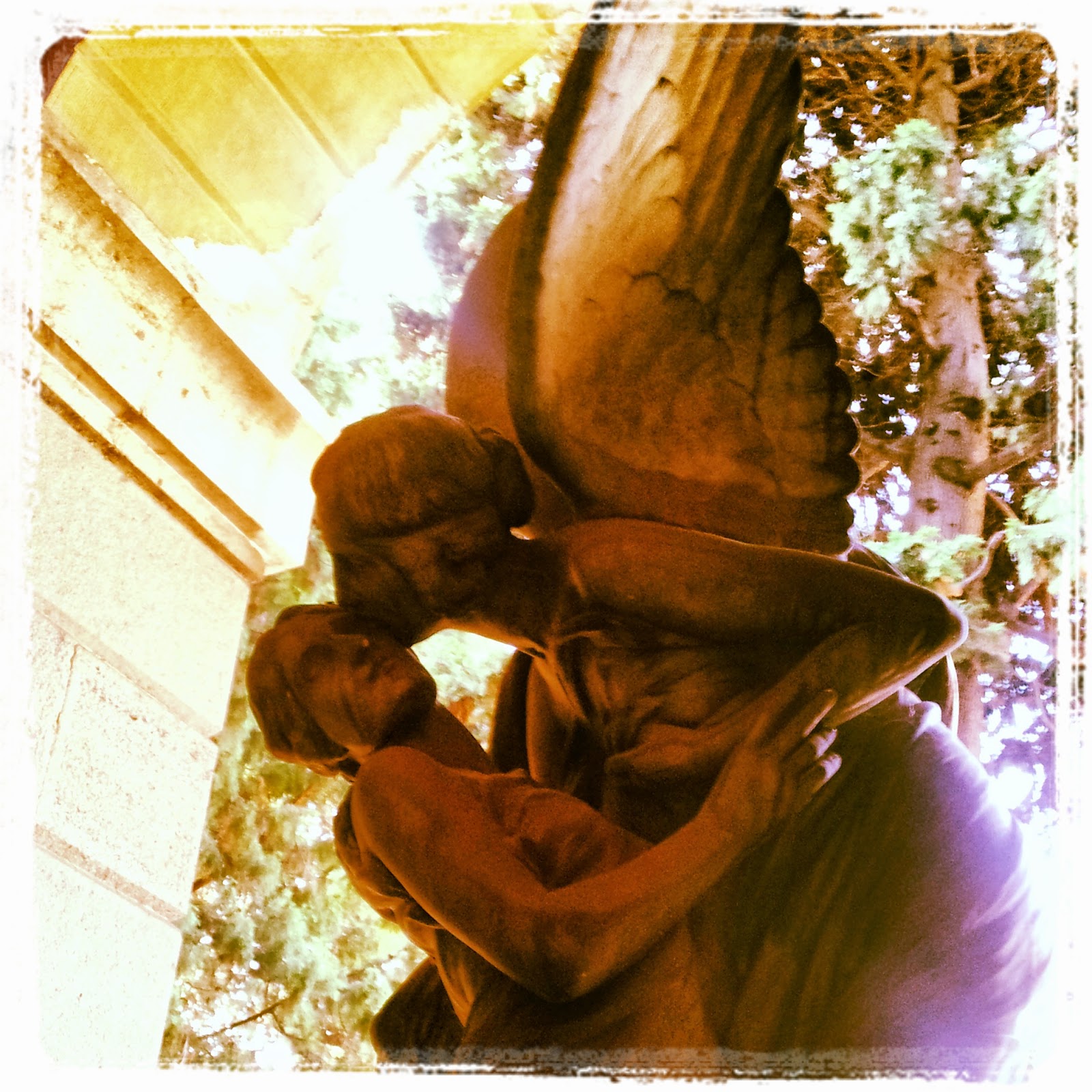 Well, maybe here in Italy the idea still make most of people frown, with a bit of wonder and suspicion: the definition itself sounds a bit grotesque and makes you think about the Addams Family on holidays; and I must admit than I go somewhere to visit (also) a cemetery, I almost feel like I have to justify myself, to reassure the person I'm talking to, who is usually at least staring, that I don't have any weird necrophile perversions and that I don't go there to make any black magic rituals. 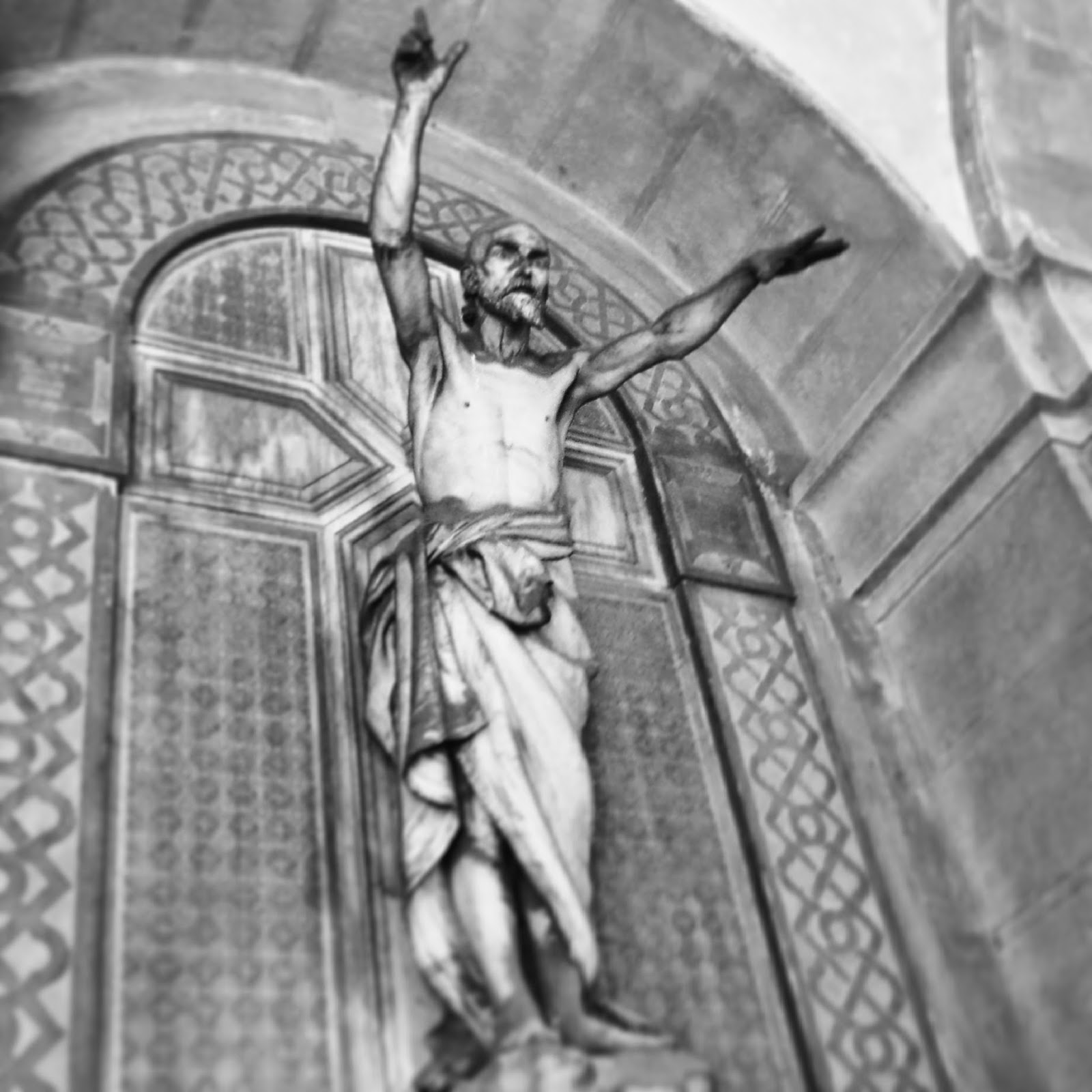 In the Protestant countries the thing seems way more accepted and classified as normal, I think.
And that also makes me think about how, in England or Sweden for example, some cemeteries are also used as normal gardens, where people go for a walk o to sit down on a bench reading a book and having a sandwich in their lunch break.
It's a different cultural approach - I don't mean towards death, but towards eternal rest.
Here it would feel kinda creepy, and maybe also a bit desecrating, to go and sit/eat/chat... near a tomb.
Maybe it's because we are Catholic.
Or maybe it's because in those countries they are still influenced, after many centuries and generations, by the conception from Old Religion, which wasn't seeing Life and Death on a straight line but inside a circle. 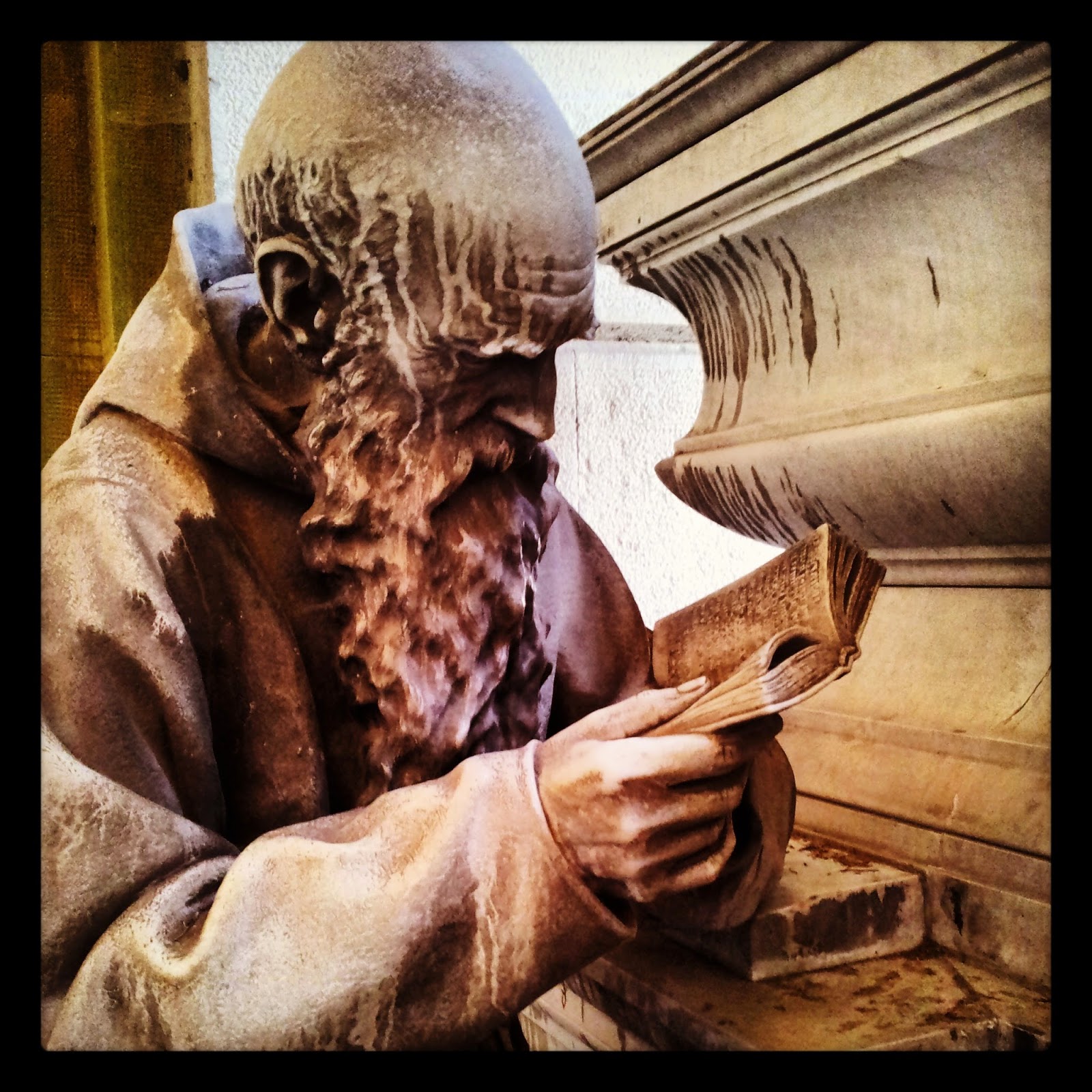 Well, whatever.
Even if my passport is Italian and I've been baptized Catholic, I'm still a black cat anyway, and therefore I can do cemeterial tourism in total freedom.
Some cemeteries, after all, are real open air museums: works that populate them are not as famous and as celebrated as those that are under a glass theca, pampered and worshipped by the whole world, inside the "real" museums; but in some cases they really have nothing to envy to the masterpieces which have written the history of sculpture. 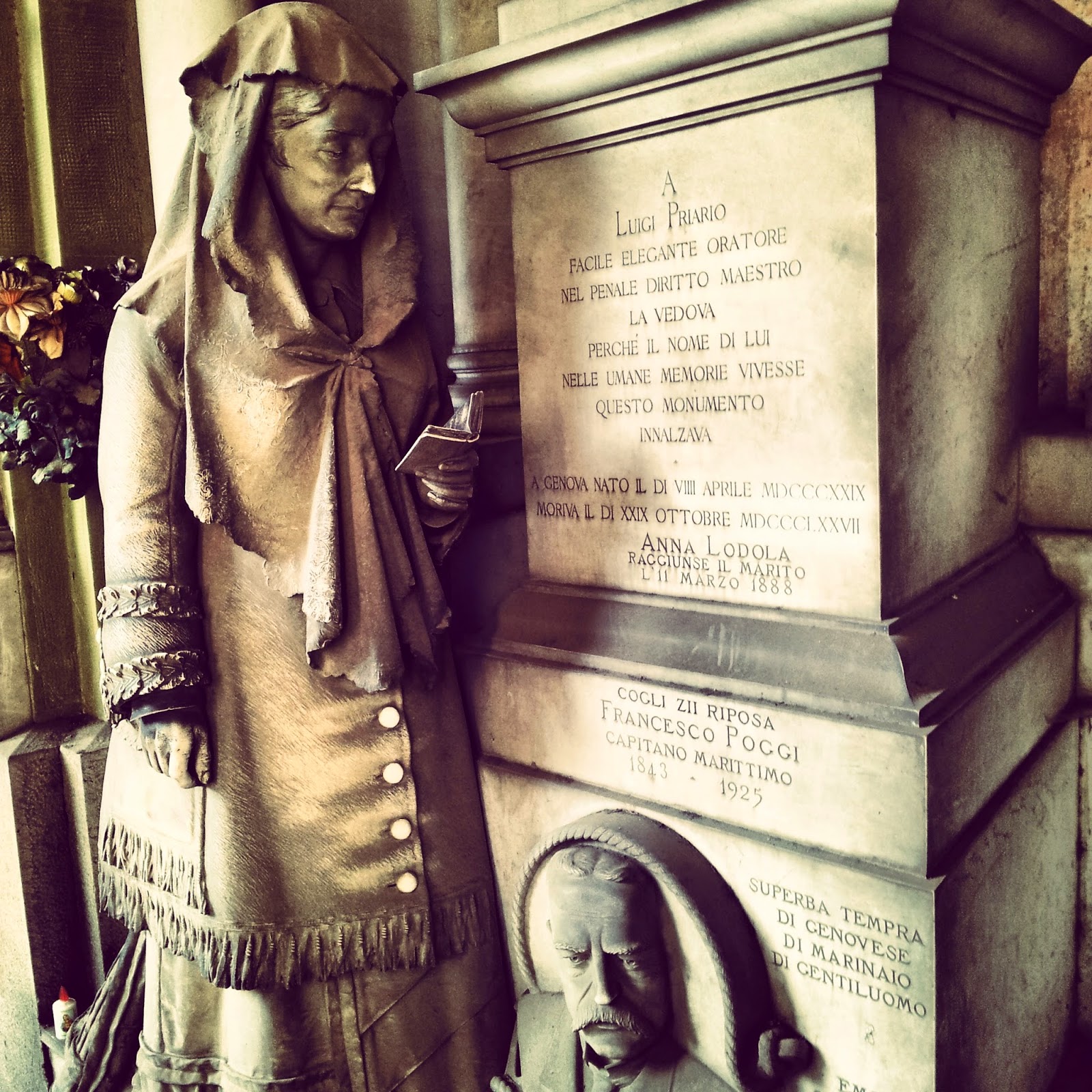 Those are masterpieces for livings, these for the deaths.
They aren't kept under lock, protected against time and weather, they aren't admired daily by thousands of loving stares.
They are covered with dust and mold, eaten by humidity and cracks, because anyway they represent the earthly caducity. They aren't being stared in admiration, but just with pain, and those who lift their eyes towards them cannot see their beauty, because their eyes are blear with tears.
They are a representation of pain themselves, with an authenticity and an expressivity so heartbreaking to feel alive.
Mourning, loss are the only thing that makes everyone equal: they are a wound which is always open for everyone, which doesn't know geography, time or social class. 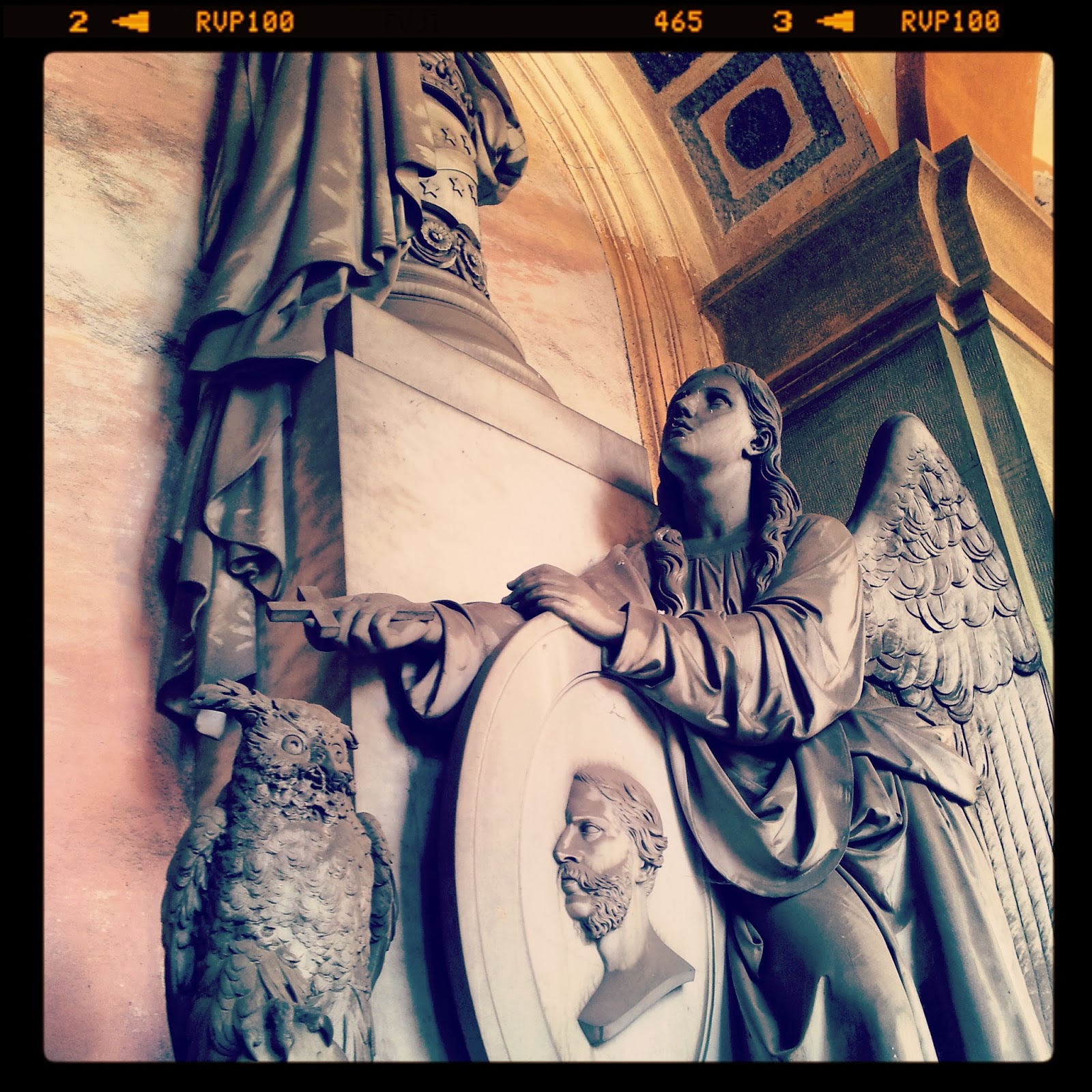 And therefore is the fact of being masterpieces created for the deaths that makes them alive, ethernal.
Because ethernal is the pain embedded in the human nature: ethernal and recognisable by everyone. 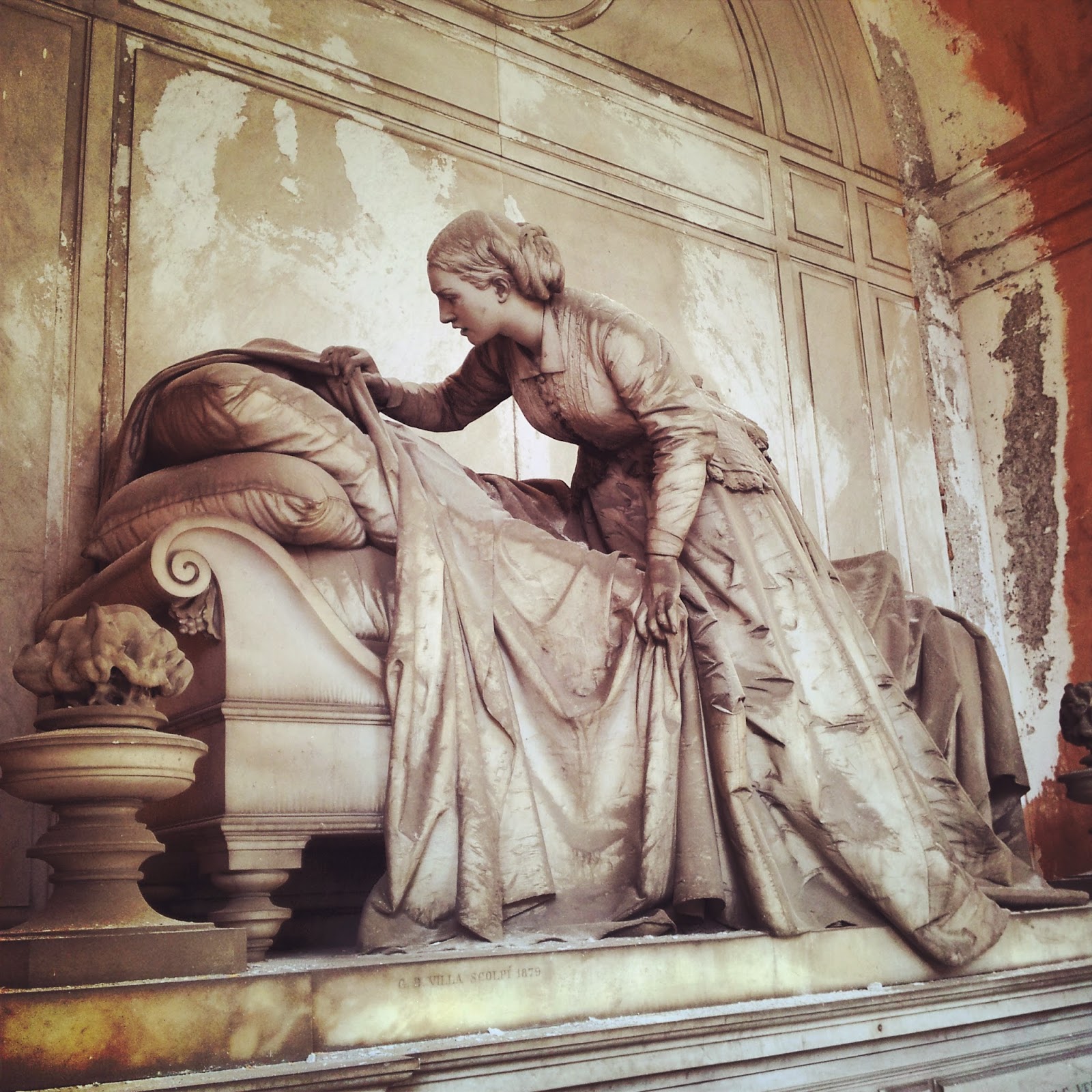 The one of Staglieno, in Genoa, is one of the most beautiful and most important monumental cemeteries in Europe.
Ginger Cat brought me there in a hot Saturday at the end of September, telling me how its beauty is also surrounded by an halo of mistery.
An halo made of blows of cool breeze that you can feel even during the hottest and airless days. And also made of some people who have reported to have met an old lady wandering throught the graves, asking for directions, without anybody else having seen her.
From the Principe railway station we take the 34 bus until the last stop and we step inside, buying a sunflower for Ginger's granny.
The cemetery dates back to the second half of the 1800s, but it's has kept on growing through the years and is now so huge that it has two internal lines of public transport.

We start wandering through the original core of the cemetery, a big quadrangle delimited by arcades and covered passages with, in the middle, a Pantheon that you can reach with a long staircase. 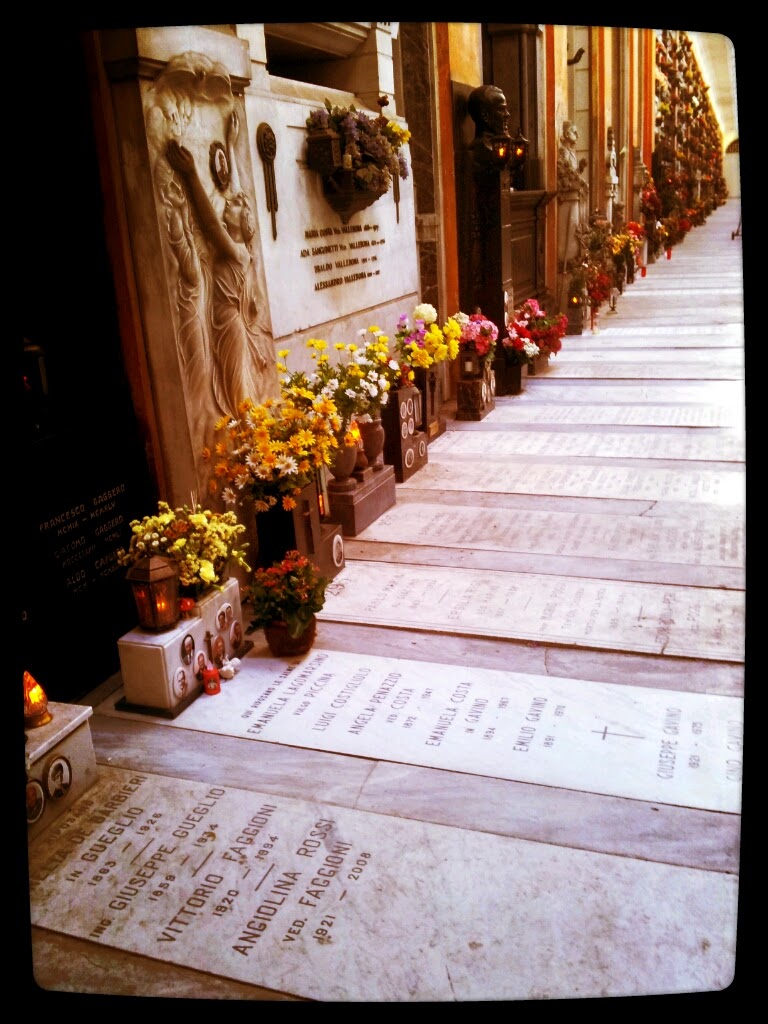 The pavement of these arcades is made of... graves, so, literally, you'll be walking on the tombs.
I try to overcome the embarassment of doing it telling myself that anyway also in the churches you often happen to do the same without even getting aware of it - but this is really like an hall of fame of deads.
I get distracted by mosquitos bites: Staglieno is really infested by them and Ginger & me get immediately covered by red wheals. Even if I won't meet any ghosts, I still can say I've met many vampires.
But the beauty surrounding me immediately overcomes both mosquitos and the creepy pavement on which my feet are standing: in very niche, in every pillar, in every arch there is a sculptureal group, and every sculptureal group tells its own story of pain with a very intense and moving grace. 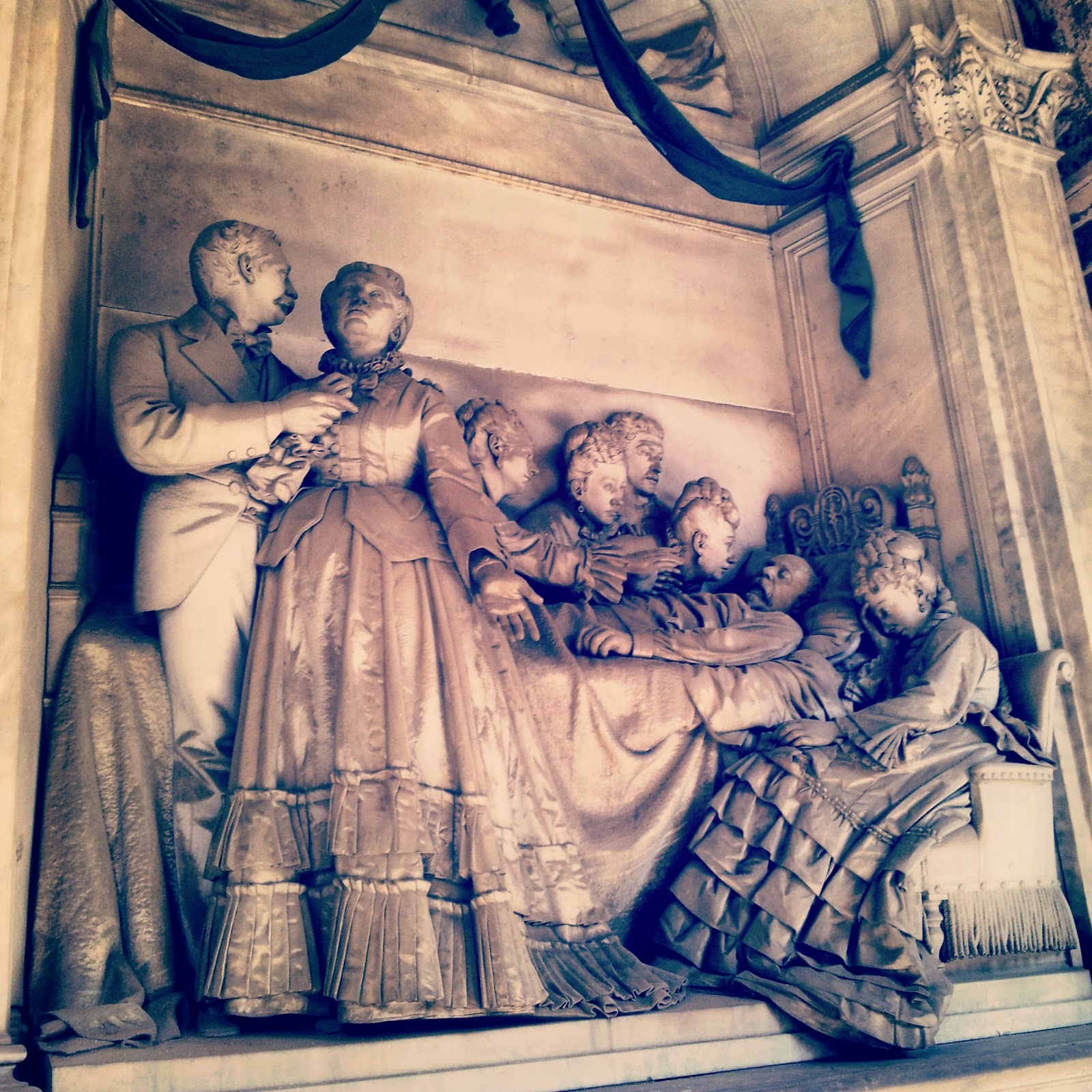 There are tableaux vivant which have been able to fix in the stone the desperation of the mourning, the painful communion of those who stay, who hold on together and hug each other in order to suffocate the sufference, but that, in spite of this, feel lonely. 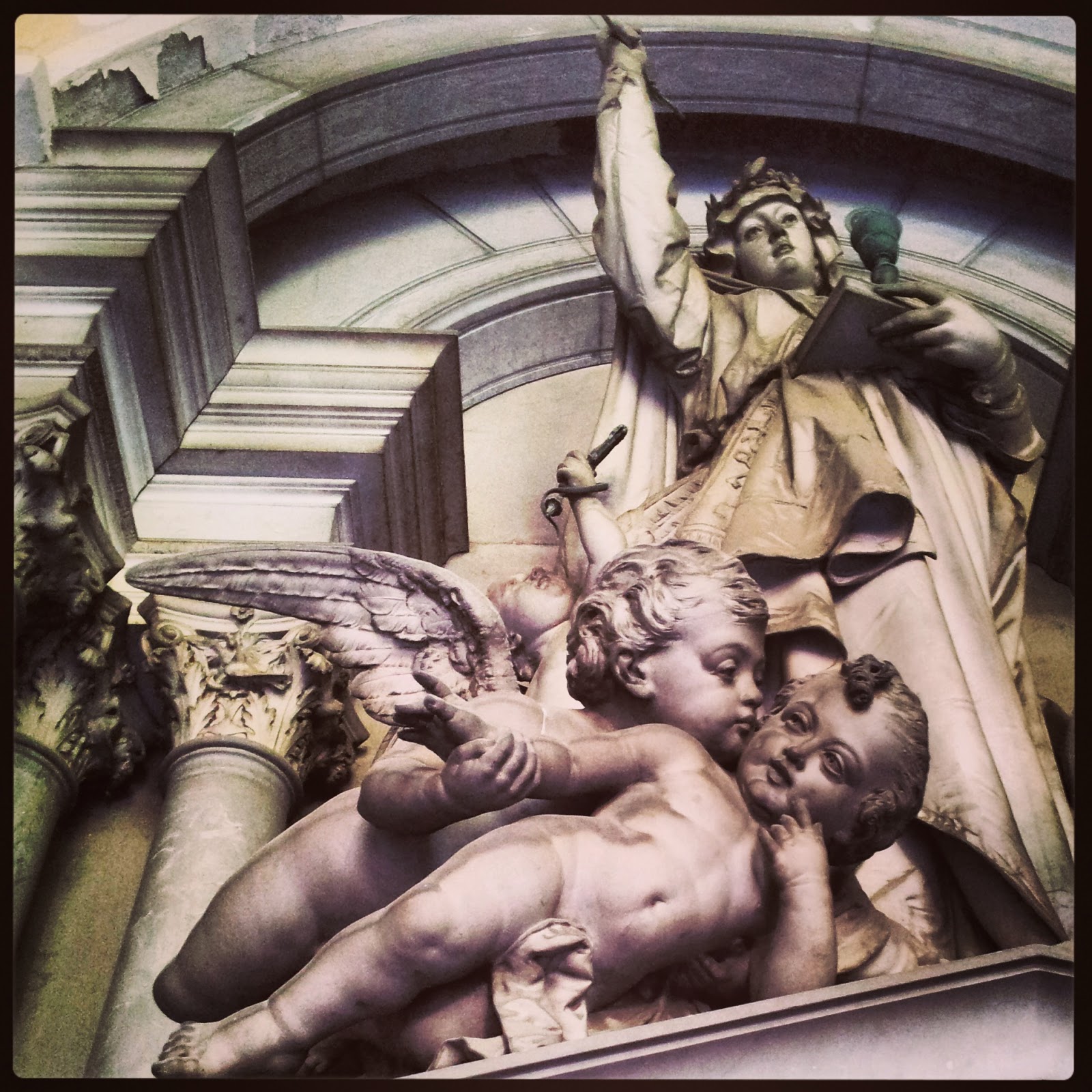 There are allegorical figures of angels overcoming skeletons, in order to remind the hope for those who believe that there must be something after this life. 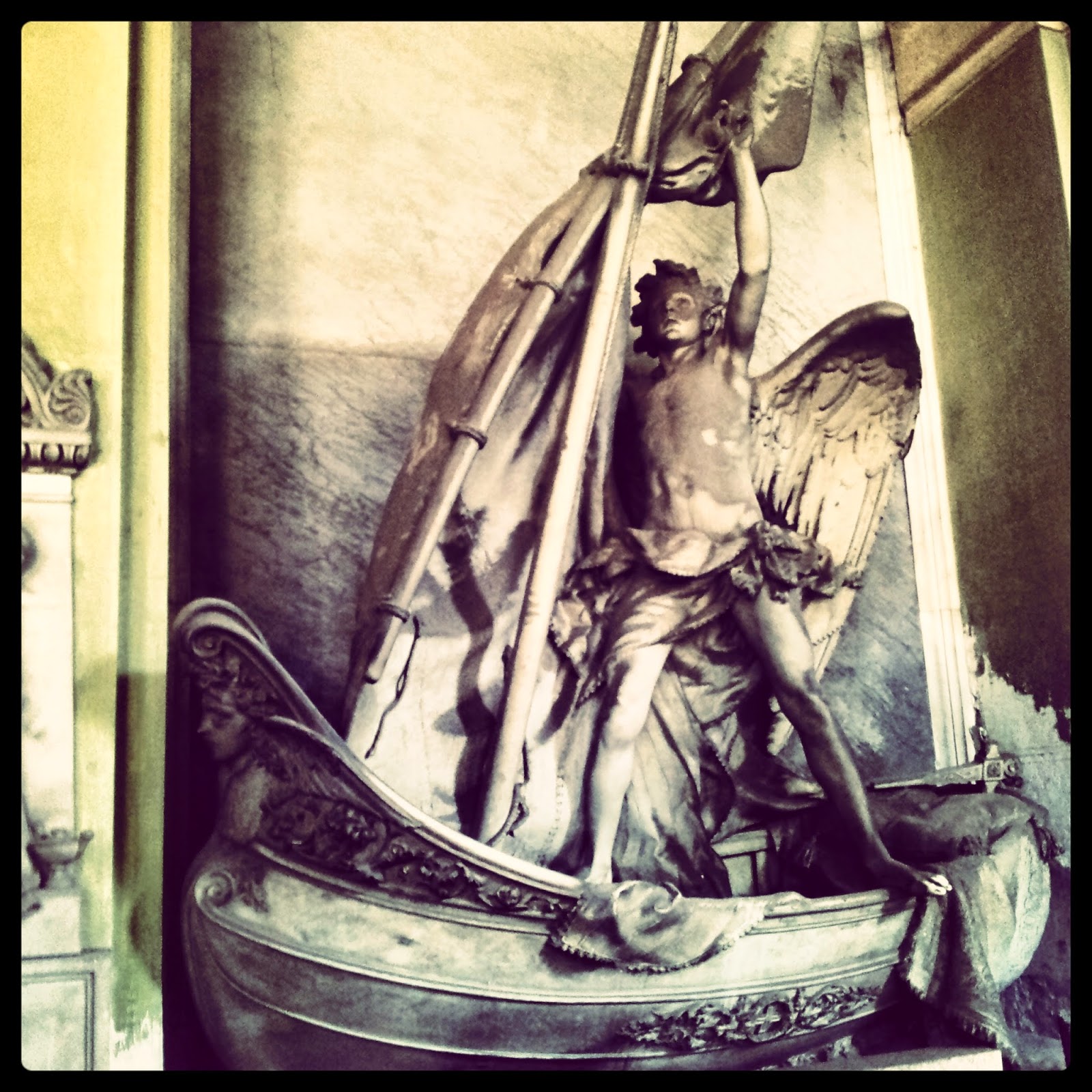 There are metaphors with boats furling their sails, making of the sailing in the open sea, which is sometimes quiet, and more often stormy, a perfect similitude for the earthly existence for those who live in a harbour city. There are lonely withered figures, lean by disease or by pain, who hold in their hands cut flowers, which will fade as well. 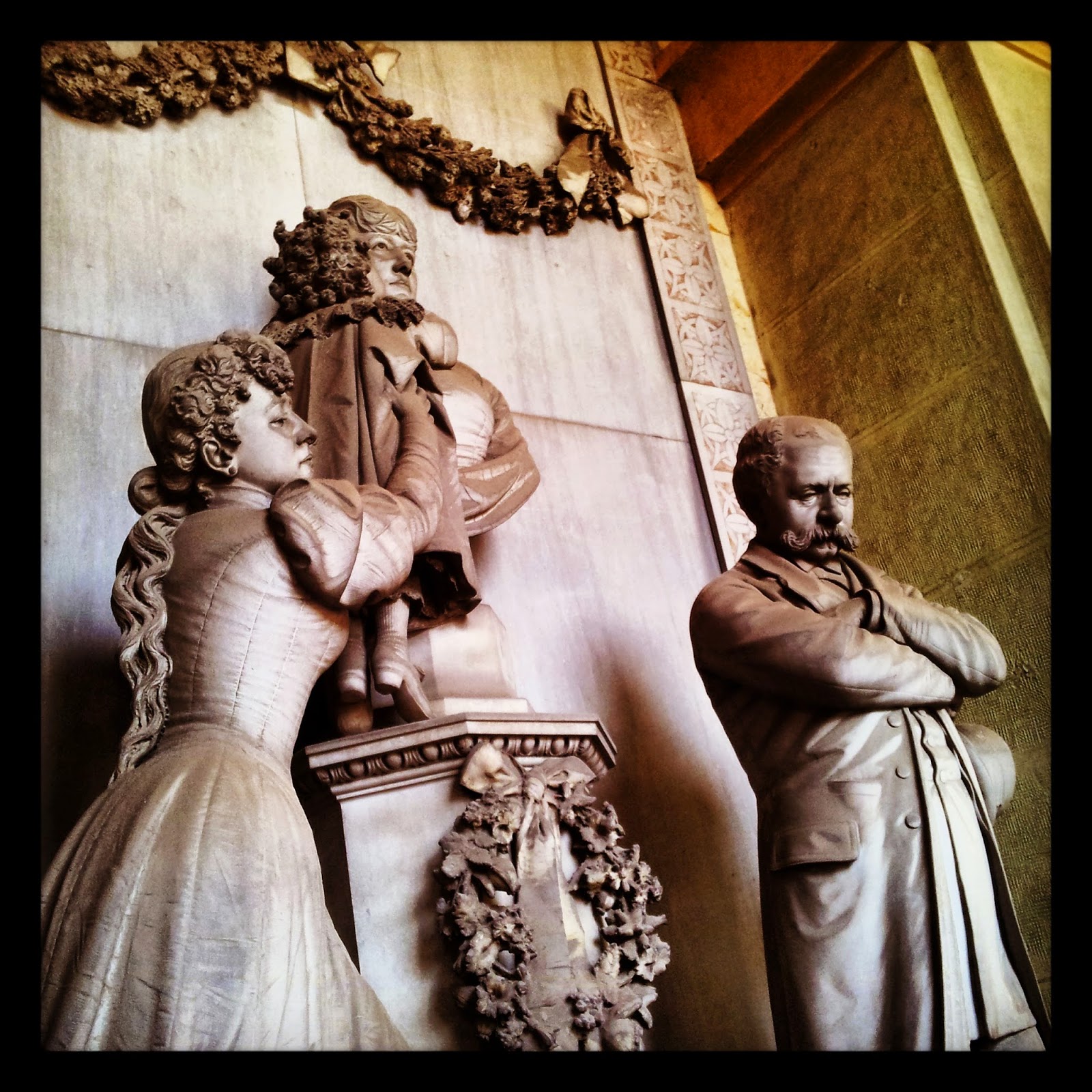 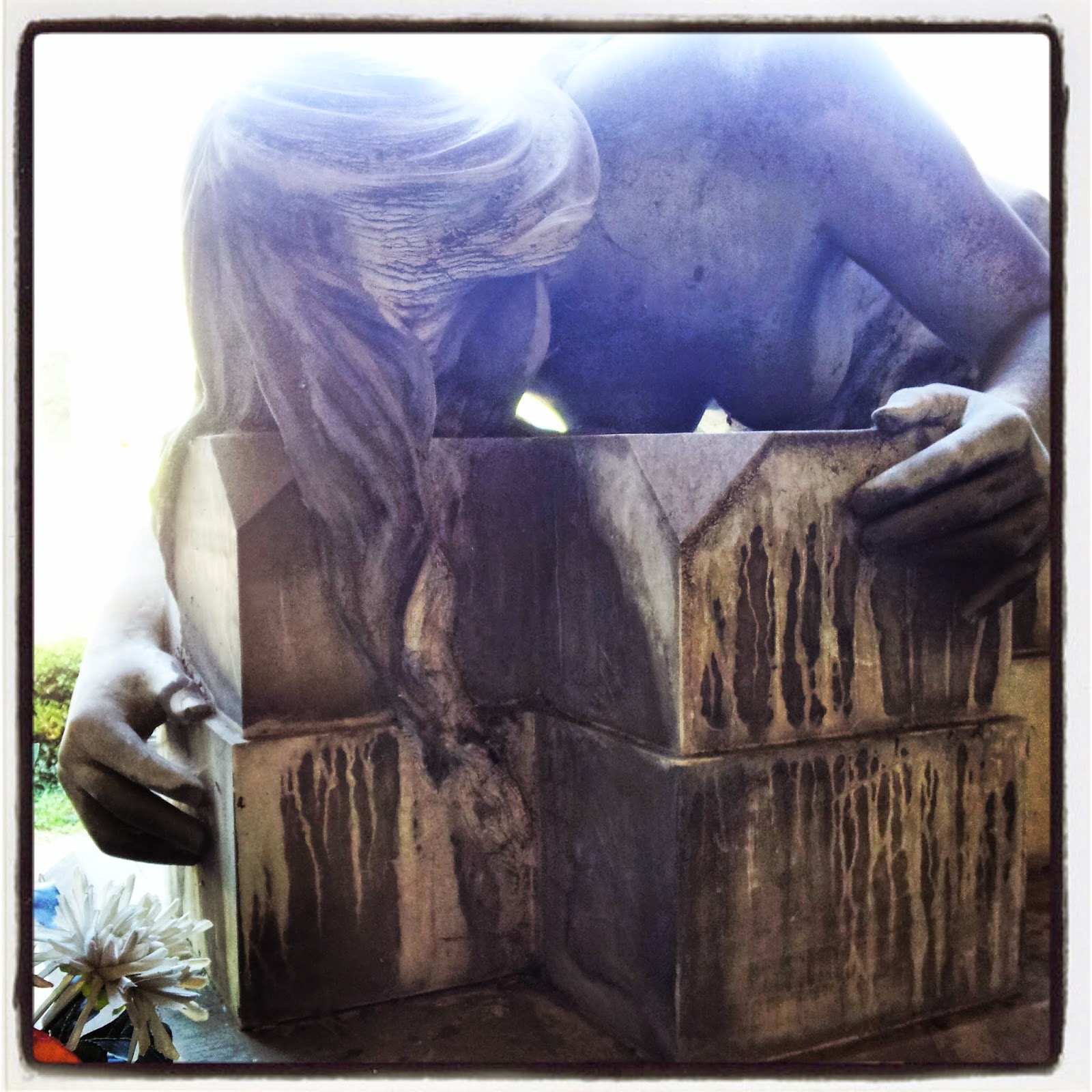 Some scream, some cower, some make an effort to stay composed but betray themselves with a grimace of incredulous desperation, with swollen eyes. 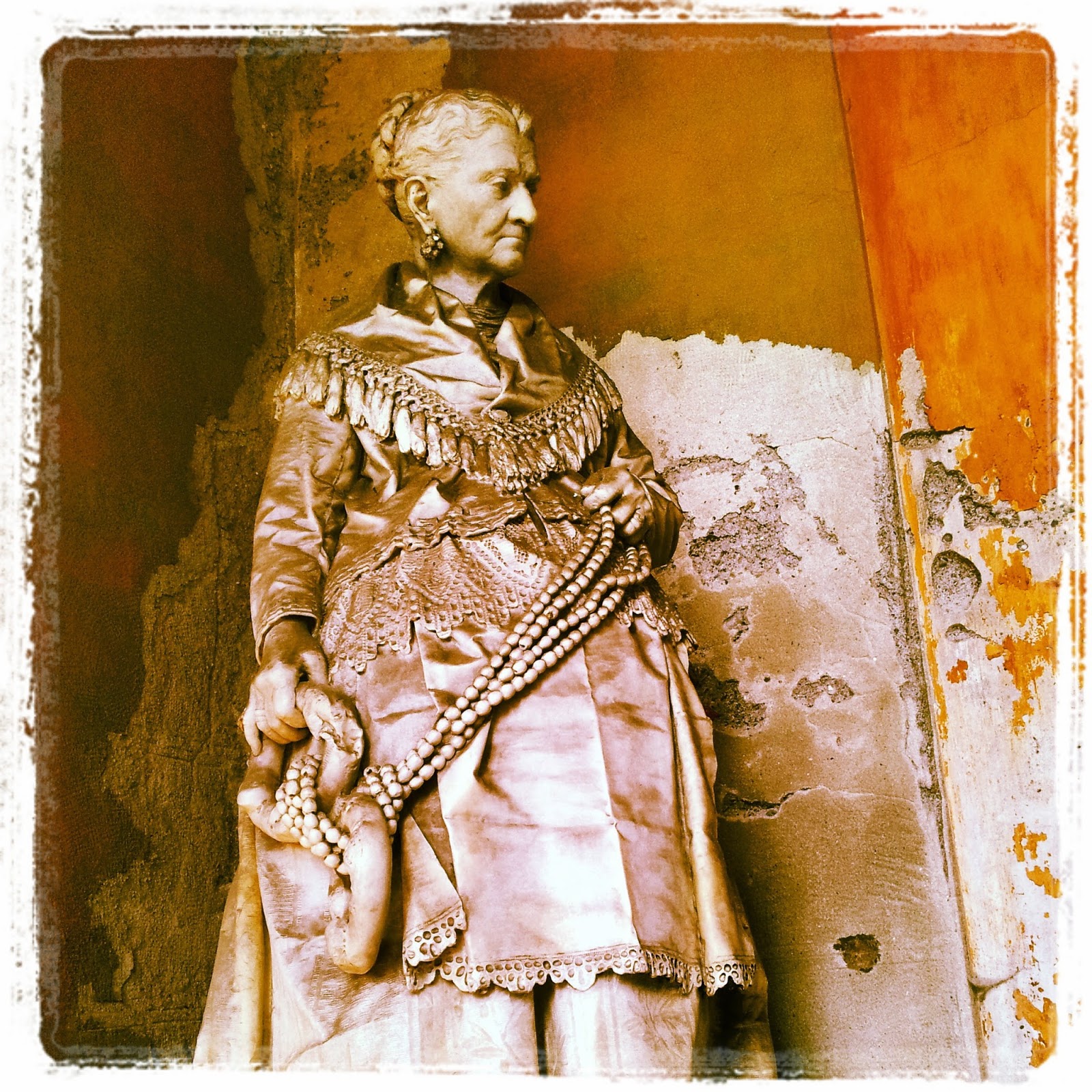 There is the Peanuts Seller, a woman from the folk who used to sell peanuts and donuts, and who saved the money she earned to order to one of the most appreciated sculptors of the time her own funerary monument.
And this is much more than the 15 minutes of celebrity prophesied by Andy Warhol: this statue is still one of the most famous and most photographed of the whole Cemetery. 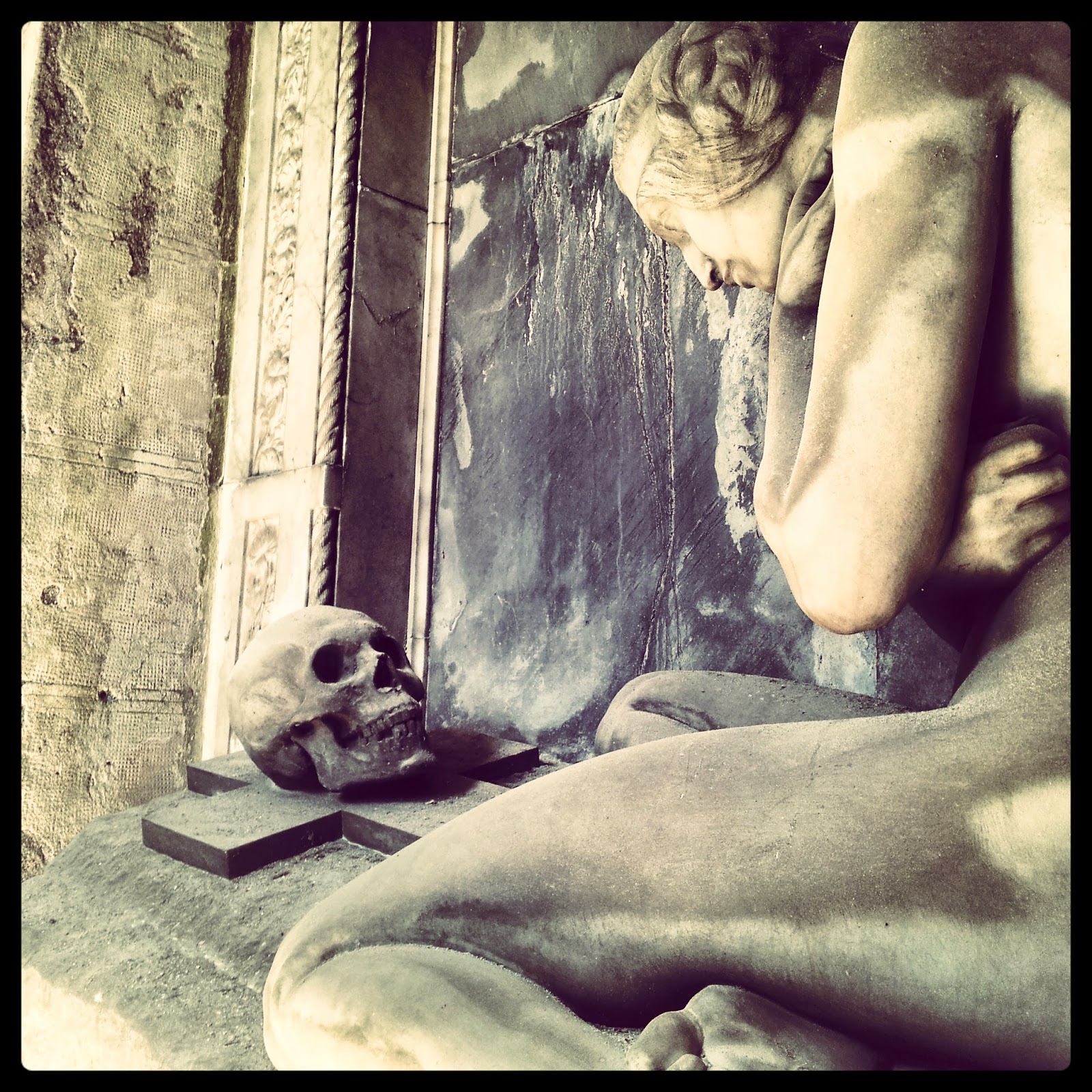 There is a surreal and sacred silence, so much that even our comments on the beauty and peculiarity of some statues are whispered, in order not to desecrate it.
Sun shines up in the sky, sliding with grace among the arcades, and its rays create games of light and shadow which make look the statues even more alive, which donate even more intensity to the flow of emotions that they keep inside their perfect features, inside the cure of their details. 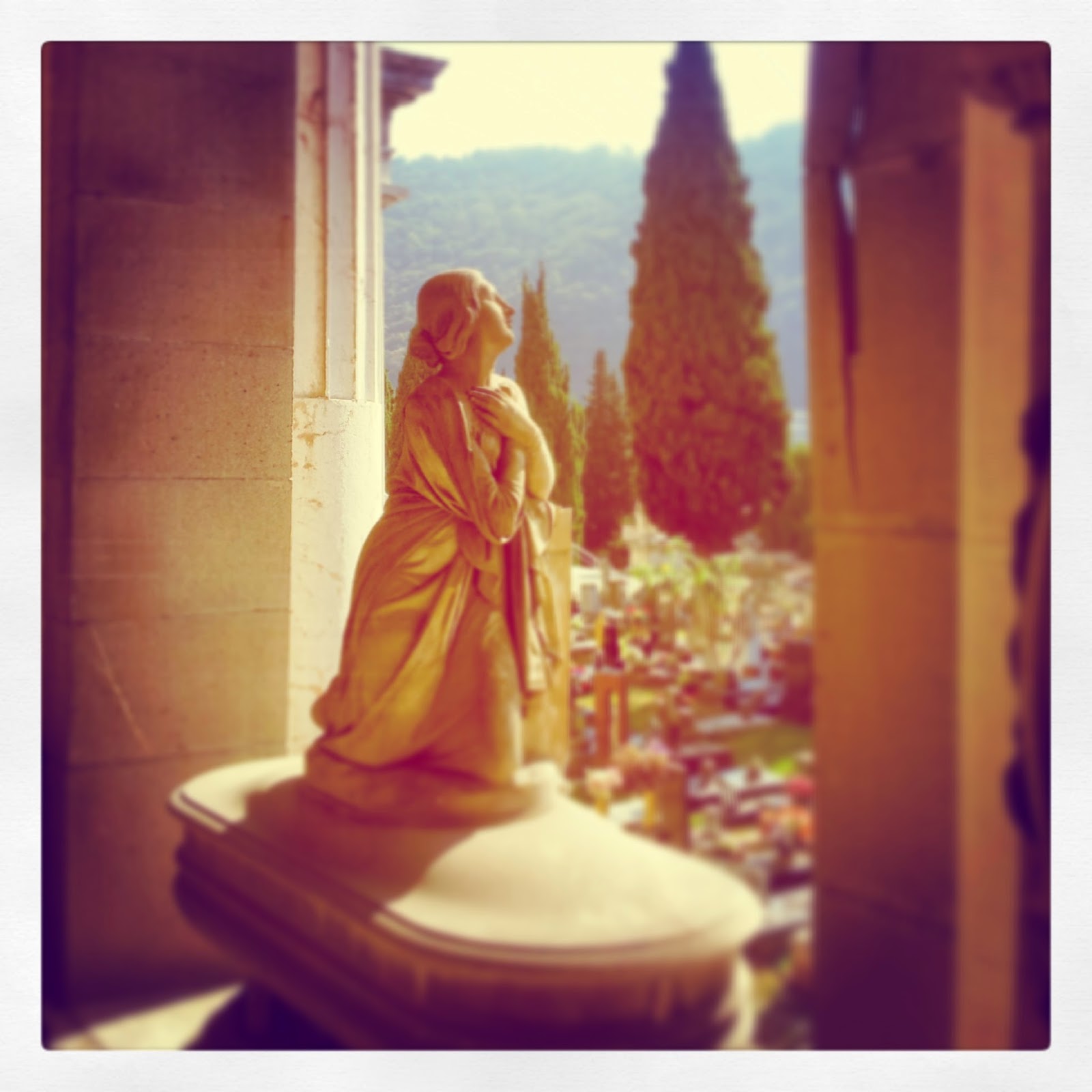 In the background, trees, grass, a vegetation a bit neglected and rebellious, towards which the sad sight of some statues in the arcades yearns - maybe still yearning for life, for beautiful things that their eyes cannot see any longer, for the warmth of the sun that their skin cannot feel anymore. 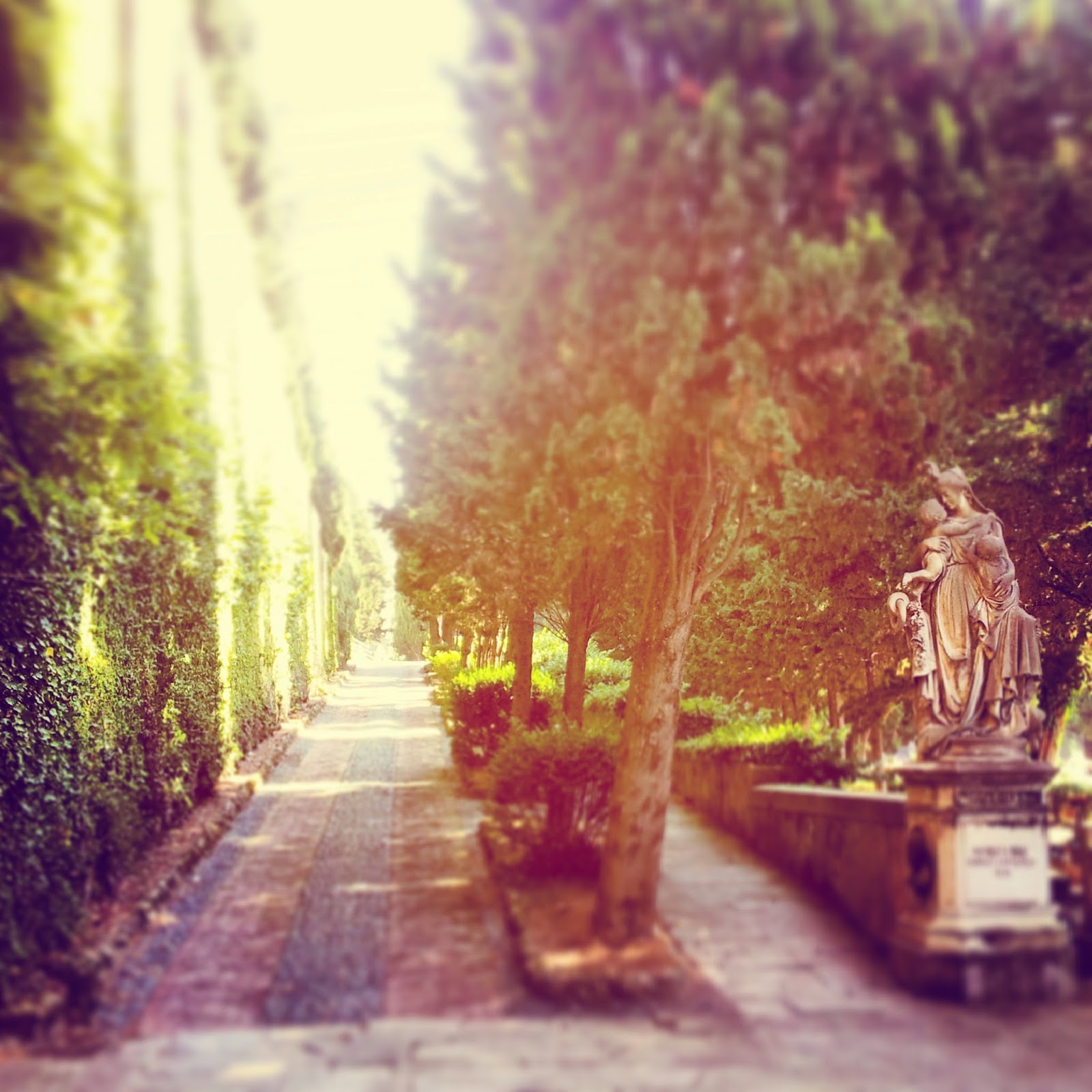 Mark Twain, during his visit to Staglieno in 1869, had defined them "as new and as white as snow".
Nowadays it's more like they are made of dirty snow: the thick dust covering them make them look more like stone than marble; but the realism of their intesity stays untouched, or actually gets even more emphasized.

Out of the historical core the road gets steep. 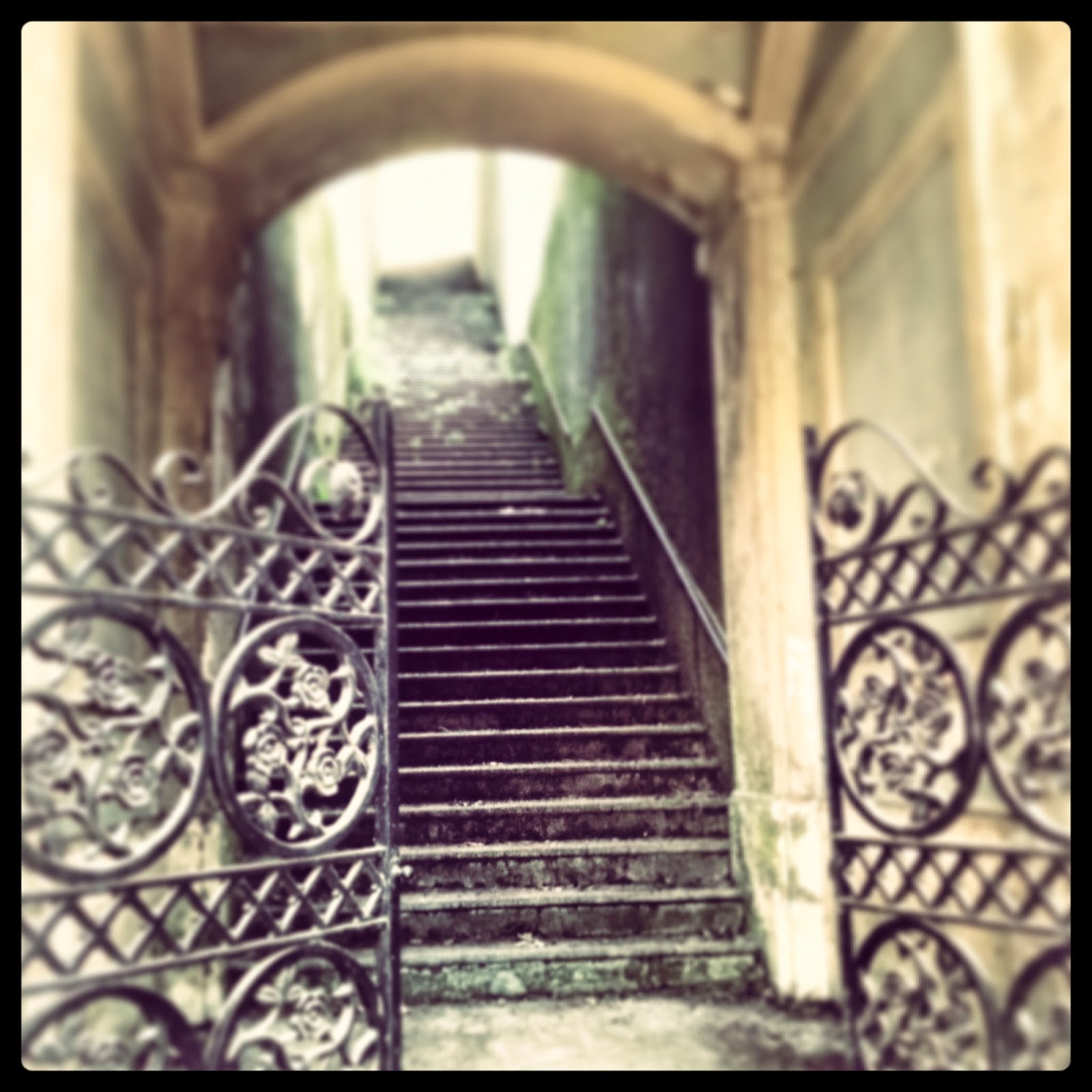 There are ups & downs and there is a steep stair behind a rusted gate, covered with pine needles and branches, which leads to the English Cemetery. 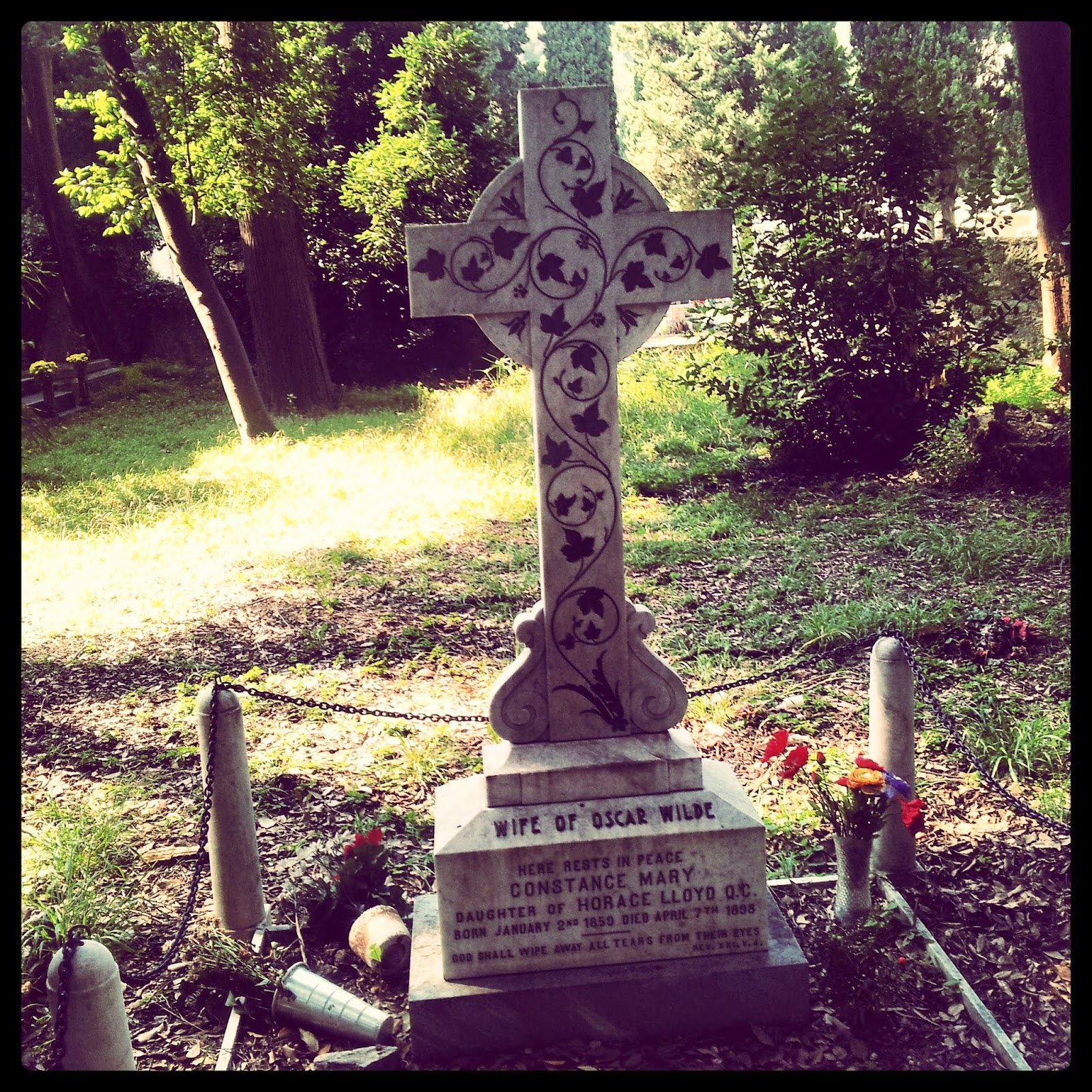 Here a simple cross with a decorative ornament reminds the memory of Constance Lloyd, wife of Oscar Wilde.
No lipstick marks on the grave: this is a kind of greeting just for her husband. 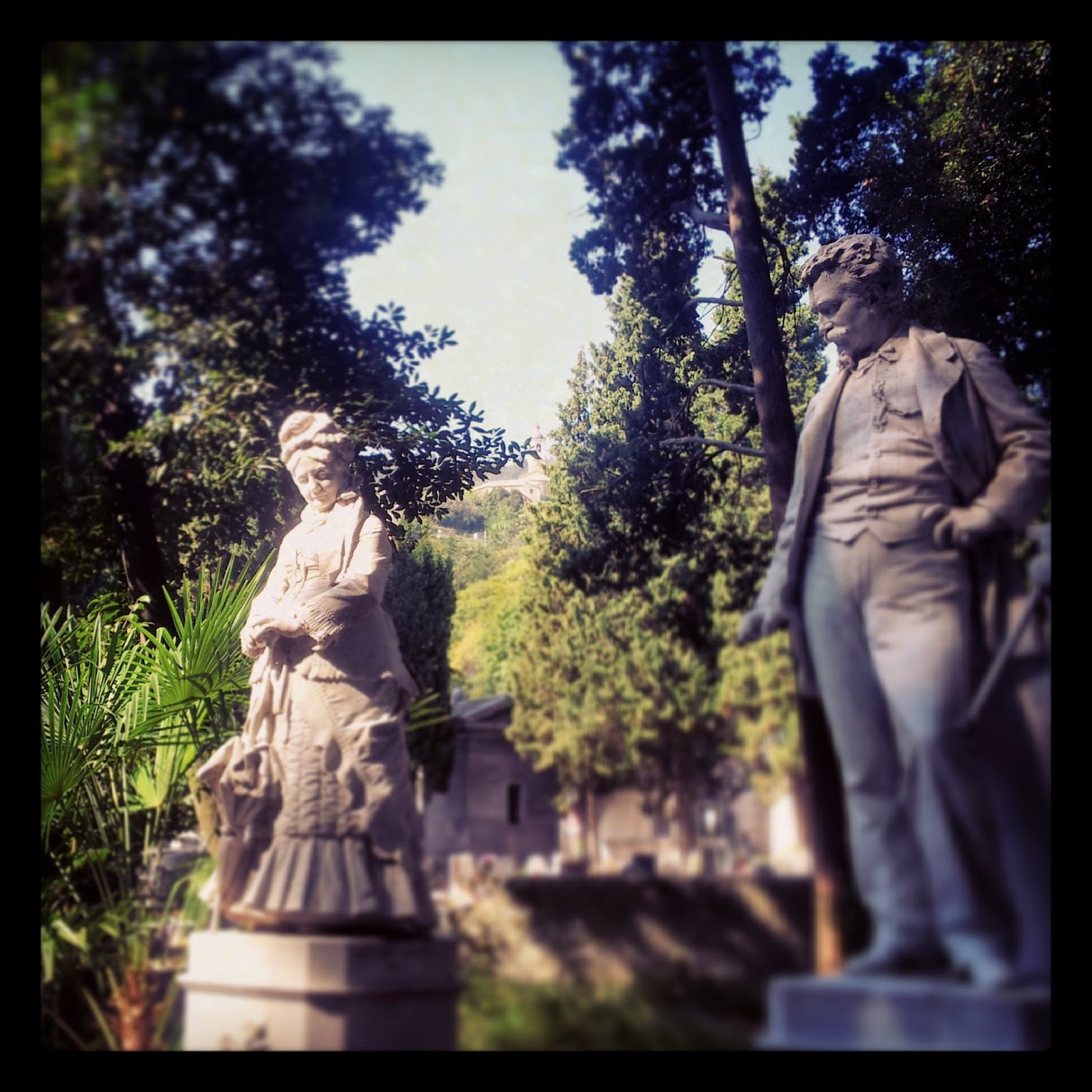 English Cemetery is more simple and sober, and the statues of the engineer Bentley and his wife get more evident.
They are put on two different pedestals, but it's like they were talking to each other.
She lowers coily her eyes; he is leaning forward her, as if he was courting her.
He stretches his hand towards her, as if he wanted to invite her to grab it, or as if he didn't want to let her go.
I take a look at the graves: she died in 1856, he 20 years after... 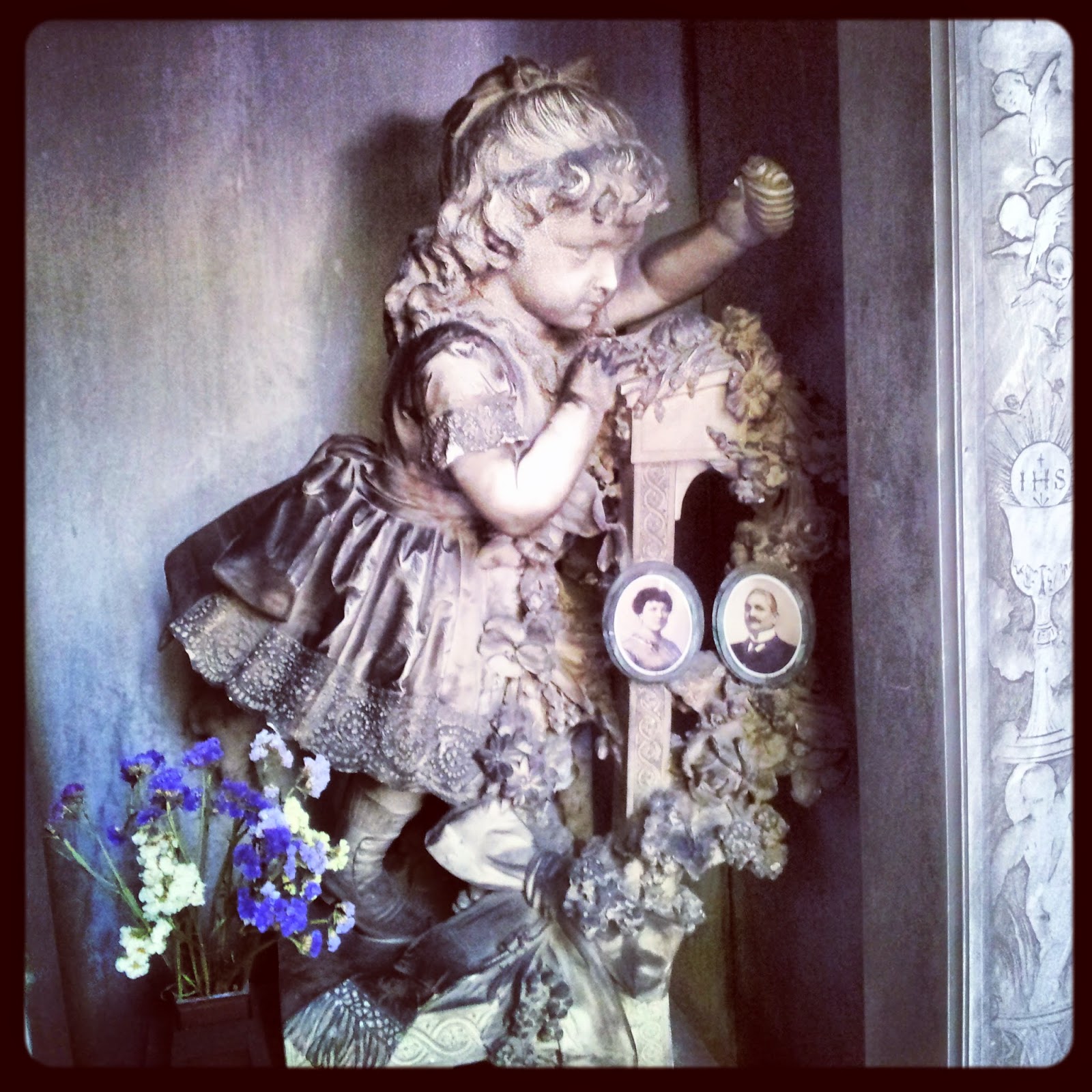 Yes, cemeteries are open air museums.
But not only museums for art.
Also and moreover museums for life...
Pubblicato da Serena Chiarle a 20:27