In exactly one week my paws will be wandering in Paris - a city where black cats do have quite a reputation.
Even if it will be my 4th time, I am already utterly excited, just as if it was my first one - because it will be my first time with the eyes of a blogger.
I have already set my itinerary and have plenty of ideas, but I guess it will be more interesting to share them real time!
Today, as it seems that it's in the nature of a black cat to be a bit nostalgic, I'm going to share with you some of my memories about my previous visits to the Ville Lumiére - just some bits & crumbles, more connected to an emotional point of view rather than a touristic one. 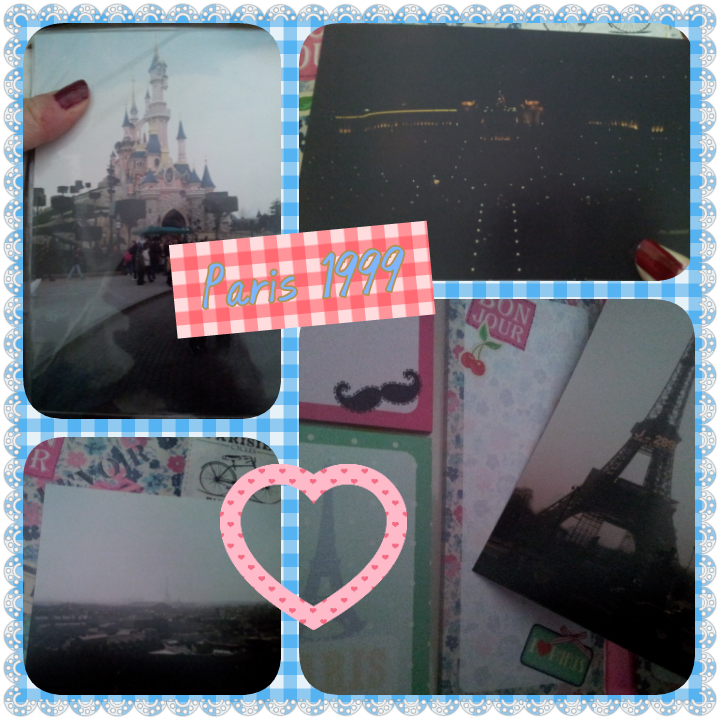 Paris, 1999 - The teenage Black Cat & the unavailable romance
My first time in Paris happened for a 5 days school trip during my last year of high school in March 1999.
Wasn't it for a week in Portugal in 1996 and the first meeting with the love of my life (London, I mean) in 1998, it could have even been my very first time abroad. I still hadn't discovered the joys of travelling, back then.
Actually, during high school I used to be some kind of disaster for what concerns social skills - I was shy, clumsy, living in my own little shell, writing all the time and, even if I had very good marks, I didn't care that much, I was mostly tormented about my incapability to deal with the outside world, and yet not having much will to try to do so. Can you hear me? I was nerd before it was cool!!
Anyway, this was just to say that it had been a sort of miracle for me to decide to join this trip: I had avoided them in the previous two years (also because the destinations were kinda boring to me), but the fact that it was in Paris and that I had a quite serious crush on a friend that year, had worked as a kick in my lazy grumpy ass to set off for the adventure.
Well, perhaps the only kinda-adventurous aspect of it has been the journey, made by bus in just one leg: that's 12 hours, which is still my personal record for a journey (not counting layovers), even if I've gone much further than Paris since then. I still see our bus driver as a sort of hero, and not only because he had to deal with the flirting of our Math teacher...
Leafing through my photo album of that trip to look for something to post here has made me aware of two things: how incapable I was to take a decent picture back then (my photography skills have been able to improve only thanks to the advent of digital cameras); and *OMG* how much time has passed already! Those photos kinda look vintage without passing them through Instagram. And all those 90's jazz pants we are all wearing...
Most of pictures are about people rather than places: actually I still wonder why on earth, of the zillion pictures we have snapped on the Trocadero, we didn't even do one with the Eiffel Tower on the background; but, besides this, I guess that's what normally happens during school trips, and moreover this kinda was my (or maybe just my mother's??) philosophy in the pre-digital era: developing films was somehow expensive, so, if you have to make a selection among the subjects of your photos, choose people, because for the places there are always the postcards.
Yeah, I can feel you, photographers, having creeps all over your spine for this statement - but to me it's an hint to reflect about how much things have changed since then, and about the insane amount of pictures (of places, people, food, animals, writings, ... whatever, really) I snap nowadays without even thinking about it.
Oh well - but I'm digressing!
Even if, as most teenagers do, I was more concerned about being loved by my mates (and by one of them in particular) rather than loving the city, I had still been able to find Paris very charming and beautiful.
My best memories about this visit had been buying lollipops somewhere at Champs Elysées at night and then making stupid poses beneath the Arc de Triomphe, wandering through the Latin Quarter, which immediately became my favourite, going up the Eiffel Tower to see an amazing view of Paris by night, ... - oh, and then Disneyland.
That was on our free day, when we could choose where to go without having teachers around - and, I'll be honest, I chose Disneyland just because my crush was going there, if it was for me I would have probably joined the Louvre group (nerd, remember?).
But now I don't really regret it. Well, maybe a bit because I still haven't managed to see the Louvre, but I guess I have time for that - the fun we had at Disneyland, instead, was the kind of fun you can only have at that silly age, and that was pretty much memorable!
I loved being there, and I remember the fairytale atmosphere immediately made me forgot to be nervous about the fact that I was scared by roller coasters.
I had never done a roller coaster before, but that day, after having reluctantly tried a very easy one, I turned the fear into fun and made 6 of them!
Oh, but now you might wonder about that crush...
Well, we were sitting alone on the stairs at Montmartre, so I really was some kind of Amélie Poulain ante-litteram, but the movie would have been shot only two years after, so I didn't have her brilliant ideas about spreading leaflets all around with me wearing a Zorro mask, and things didn't go that smoothly then.
When I finally found my courage to talk to him... he just interrupted me to say something soccer-related to a group of our mates passing by, joining them for the comments about the last matches.
So now my most vivid memory about him is when he told me that with my new haircut I looked like George Clooney - which, if nothing else, doesn't make him sound like a big loss, perhaps! 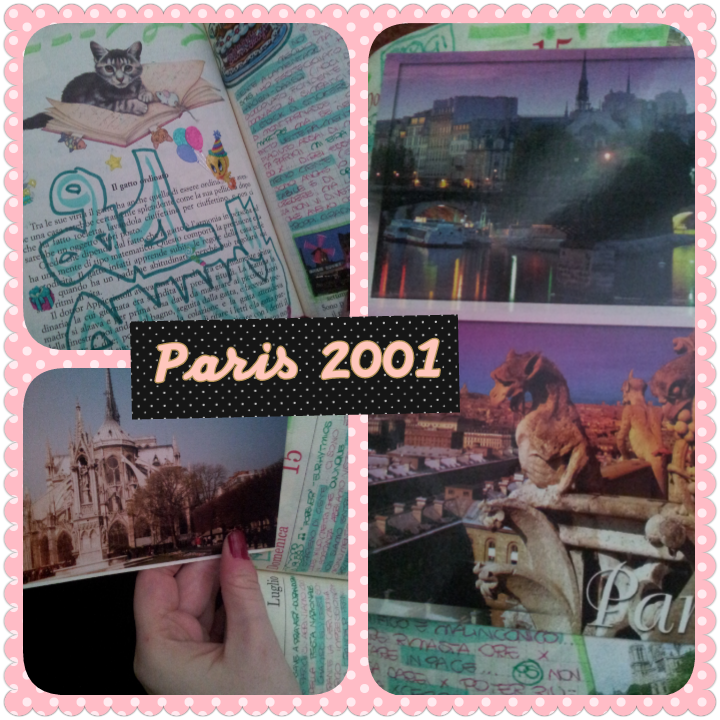 Paris, 2001 - We almost share our birthday
Two years after I had asked my parents to go back to Paris to celebrate my birthday.
Lovely idea, if only my birthday wasn't on July 16th, which made that weekend probably the most crowded you can ever find in Paris.
No, not because of my b-day of course, but because on the 14th there is another anniversaire: the birthday of France as a republic.
That was the very exact day when we arrived, and, for as much as I hate crowds, at least I wanted to enjoy me too the real reason for all that crowd, which is the military parade on the Champs Elyseés. But obviously it was quite impossible to actually get to *see* anything, so basically just got the people's jam.
This visit has represented the first time when I got aware about how much Turin and Paris look alike... well, that's a challenging comparison, I know, but actually Savoy kings did this on purpose, and the atmosphere and architecture are so similar in some areas that I often got the impression to be in a bigger and more splendid version of my hometown.
This has also been the first time I've fallen in love with Notre-Dame cathedral: strange it didn't strike me so much on the first visit, because my passion for Middle Ages and gothic is something written in my DNA and lasting since forever; but I remember that during this visit I simply didn't want to go away from a quiet corner I had found along the Seine just in front of Ile de la Cité, contemplating the cathedral and its mistery, thinking that, after all, human beings can sometimes do very grand things.
I had celebrated my birthday with an Haagen-Dasz ice cream at Montmartre's (their Macadamia Nut Brittle flavour is my fave ever) and with a trip to Versailles, showered with an heavy rain just when we were hanging around the beautiful Sun King's gardens.
"Apres nous le deluge!" - as somebody used to say perhaps in that very same place! 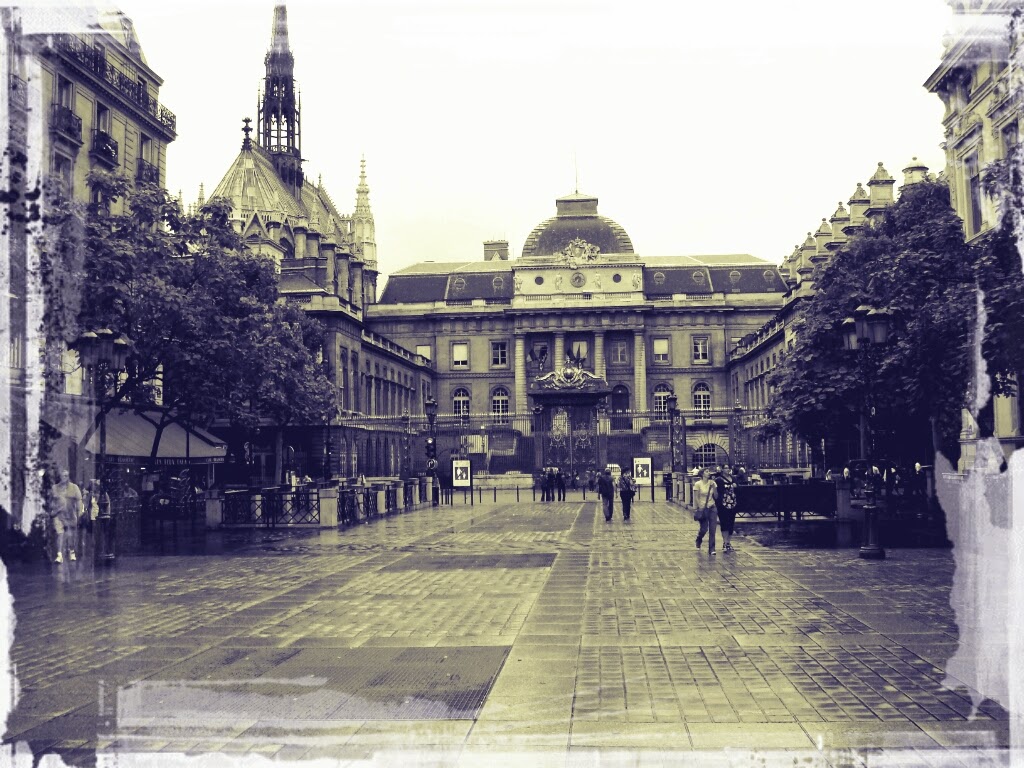 Paris, 2008 - So nice to see you again!
Now enough with archeology, we can come back to more recent times, when even digital photography was already part of my world and so I could drag some more (and decent) pictures.
My visit in 2008 was just a stop of less than 24 hours during my trip to Normandy and Brittany with the White Cat.
Quick but intense, I remember we had almost been able to do a complete tour of the main landmarks of the city just walking along with our turbo paws. 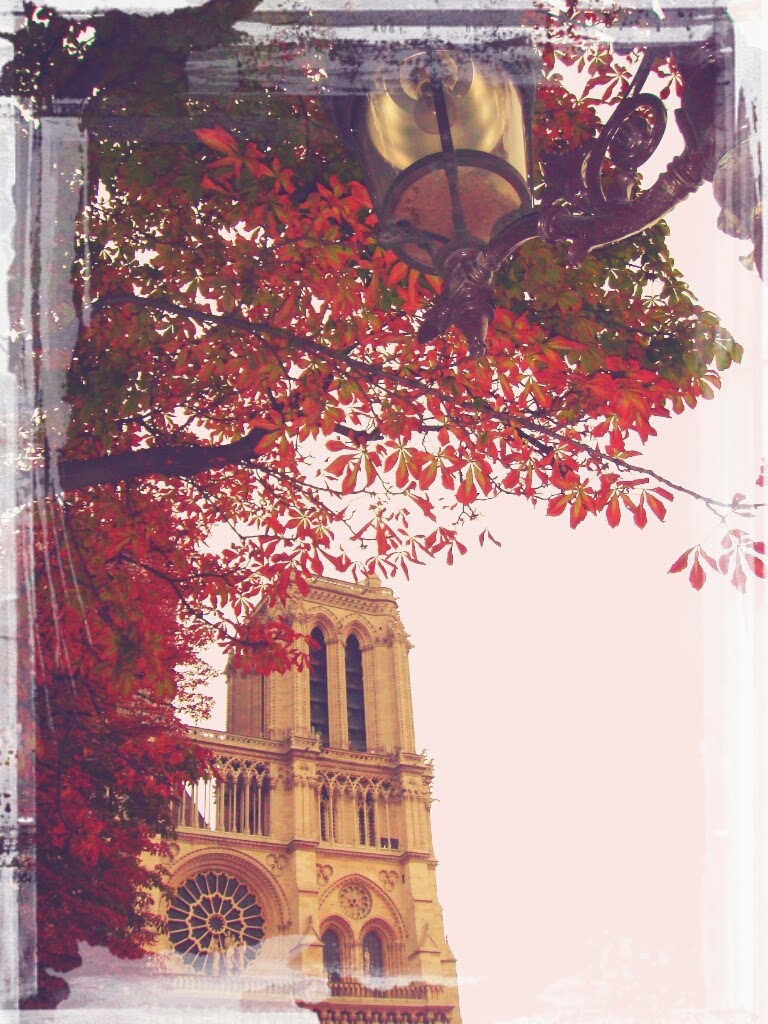 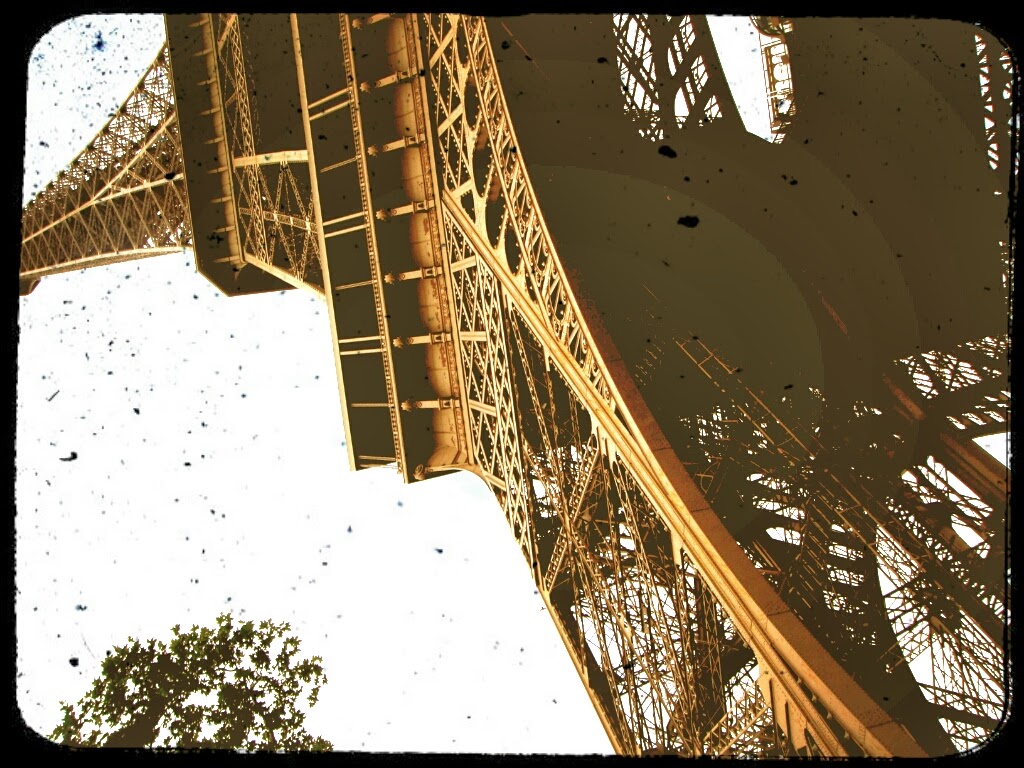 I saw Notre-Dame for the first time without all the restoring scaffoldings - finally!; I went to see how the Eiffel tower looks like from its bottom; ate a baguette sit down on a pebbled sidewalk in Montmartre, which is kinda bohémienne; bought myself the Chat Noir shopping bag that the whole world seems to have and that of course I couldn't miss; and saw as much Parisian beauty as possible in one quick shot! 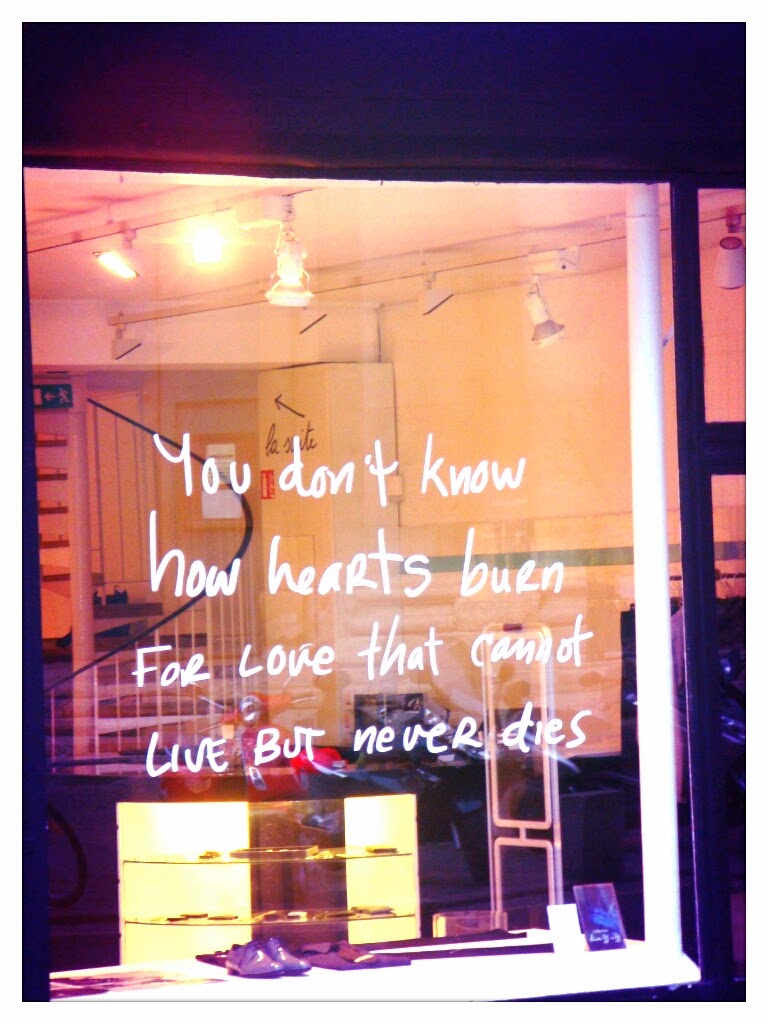 Now I'll be shortly back for more!
My list is long, my turbo paws are loaded and roaring... so stay tuned!!
Pubblicato da Serena Chiarle a 19:24