I've always felt a strong, compelling attraction for the Celtic world.
Always, like since forever, because I had found out later that my favourite fairytales as a kid, the ones I wanted to read or hear over and over, because I loved so much what they were making me daydream of, were actually derived from Celtic folklore and legends.
Like every strong and genuine passion, I am not able to explain rationally what exactly is that I like so much about it. I mean, of course I could recount a pretty long list of charachteristics of the Celtic culture and civilization that I find appealing - like their love and respect for nature, their communion with it, or the fact that they use to give a same and equal importance to the masculine and feminine principles - but, all in all, the biggest and sheerer reason for my attraction is quite obvious and simple.
I feel dragged to it. I feel I belong to this culture, to this world: I mirror myself, my inner soul there, and, during the years, I've found some important answers.
When I was younger I was even totally and genuinely convinced that I must have been a Celt in one of my previous lives. Nowadays I no longer ask myself this kind of questions; but still I reckon the strong feeling of homecoming whenever I visit any of the areas where the Celtic tribes used to settle.

Among the Celtic homelands that I've seen, Brittany is the one where I've felt the strongest sense of arcane, of something primordial - a sort of magic that is wild and very powerful.

Brittany is in France, but it really doesn't have much that is French.
It still feels like it belongs to the Kingdom of Cornwall, like it used to be during Middle Ages - or better, that it's a place of its own.
Like all the people with Celtic roots (including myself, perhaps??), the Britons are very proud and very attached to their culture and origins.
I guess they are even more because, back in 19th century, the French government had prohibited them to use their own language, which was still taugth in schools and used for official documents: French had to be the only language used in the whole France, whoever was caught to speak Briton had to pay a fee.
Nowadays such interdicition no longer exists, and alas, in the past few decades Celtic culture has become kinda trendy and therefore attracts tons of tourists - so Britons are not only allowed but even encouraged to show and spread their traditions and costumes.
But actually they don't do it for touristis - they don't really care too much about tourisits...
And this has been what I've loved about them - because everything was still so genuine.

[1] Saint-Malo
Saint-Malo is nicknamed "the pirate city", because not only it had witnessed some corsairs battles back in the 17-18th centuries, but it had given birth to quite some celebrities in the piracy world of those years, and also to some adventurous sailors and explorers, like Jacques Cartier, who is nowadays officially awarded of the title of the discoverer of Canada, and who anyway had a very important role at founding some settlements like Québec City and Montreal. 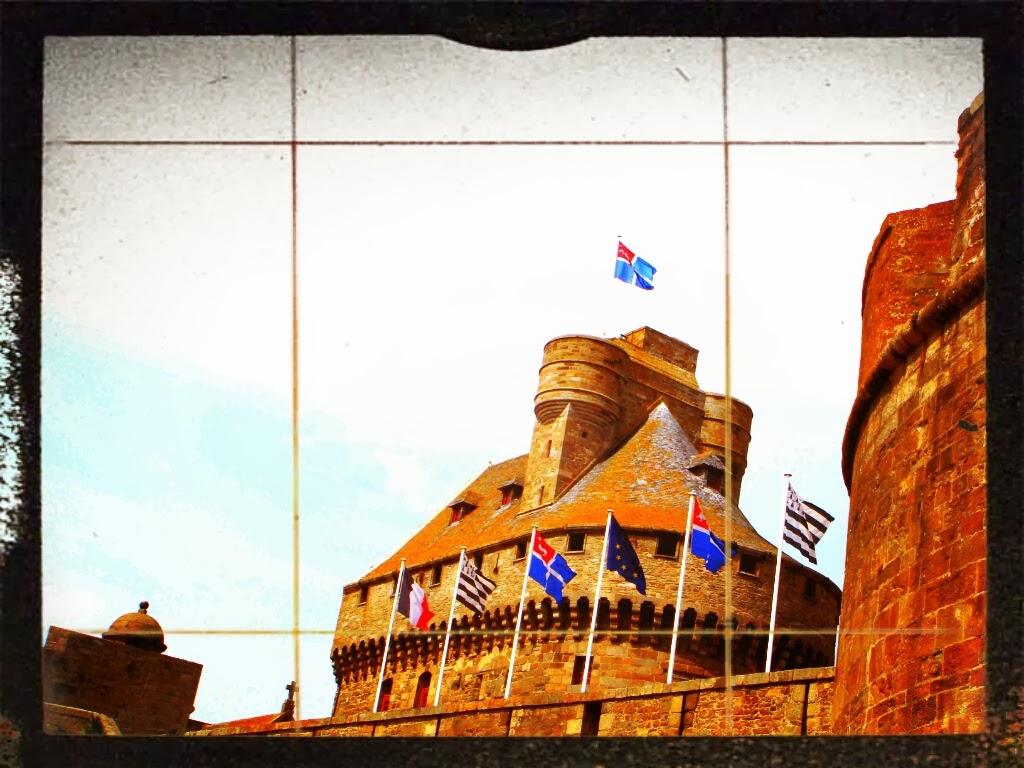 And you still can feel it - being it for the forest of boats' shafts you always spot outside it, being it for its fortified walls... but the city still kinda brings a sort of rascal atmosphere.
As just mentioned, the old city is surrounded by thick and high fortified walls, upon which you can also walk to get an interesting view from above. It's a 1.8 km walk, so that's a good exploration. 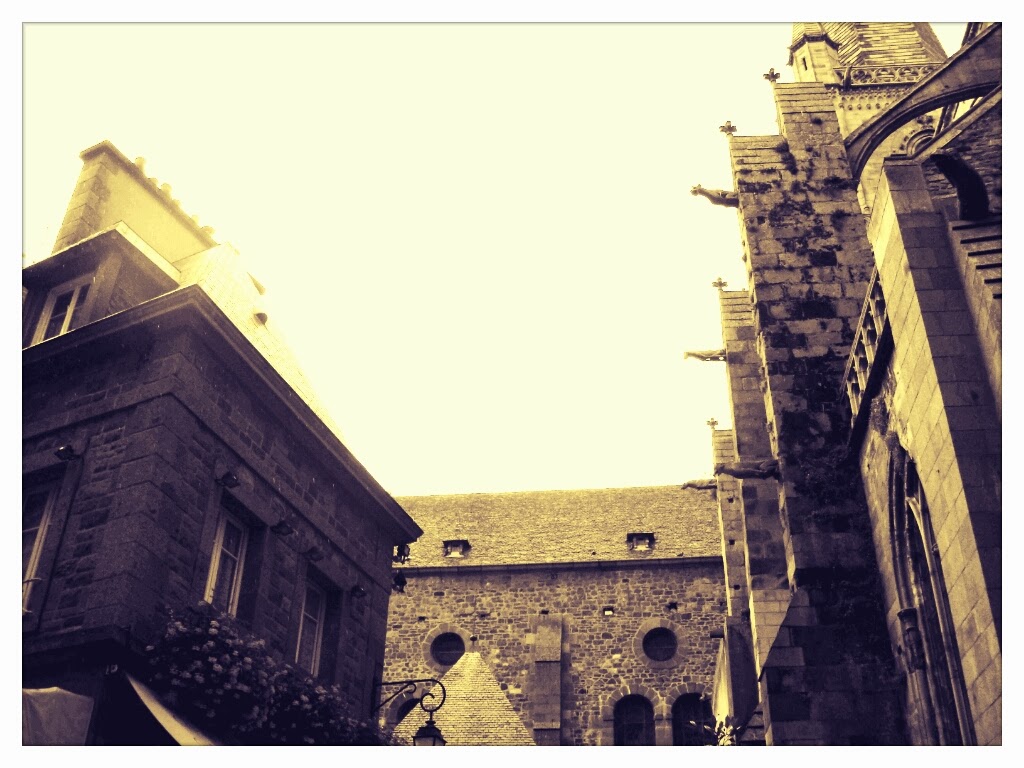 Inside the walls (Intra Muros, which is the Latin for that and the way the old city is actually called) there are quite many nice spot to see, like the Saint-Vincent cathedral, the castle, an 18th century house which used to belong to a famous corsaire, and some pretty craftsmenship shops. 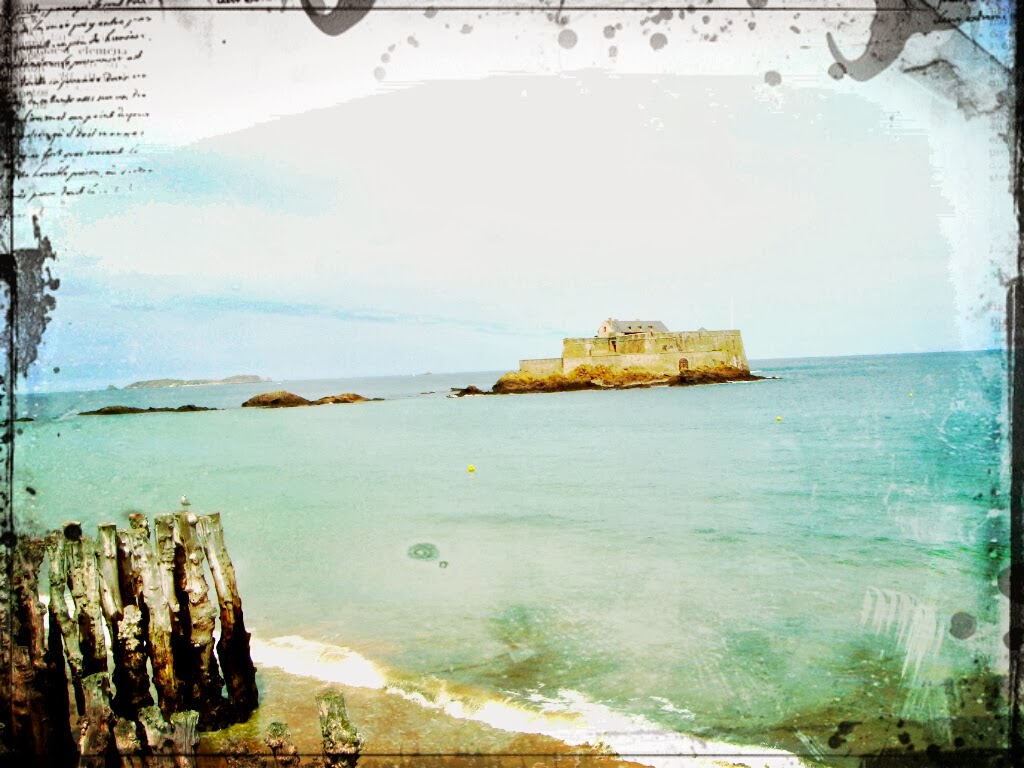 But don't forget to also take a stroll along the beaches - keeping in mind that Saint-Malo has a quite important tide excursion.

[2] Finistère
Finistère derives from the Latin finis terrae, land's end, and it's actually the name of the most western department in which Brittany is divided; but I mean to address you towards the part of it that actually is coherent with the meaning of the name - that is the part of the coast that dives directly into the sea, representing the border between the land and the unknown, wild water. 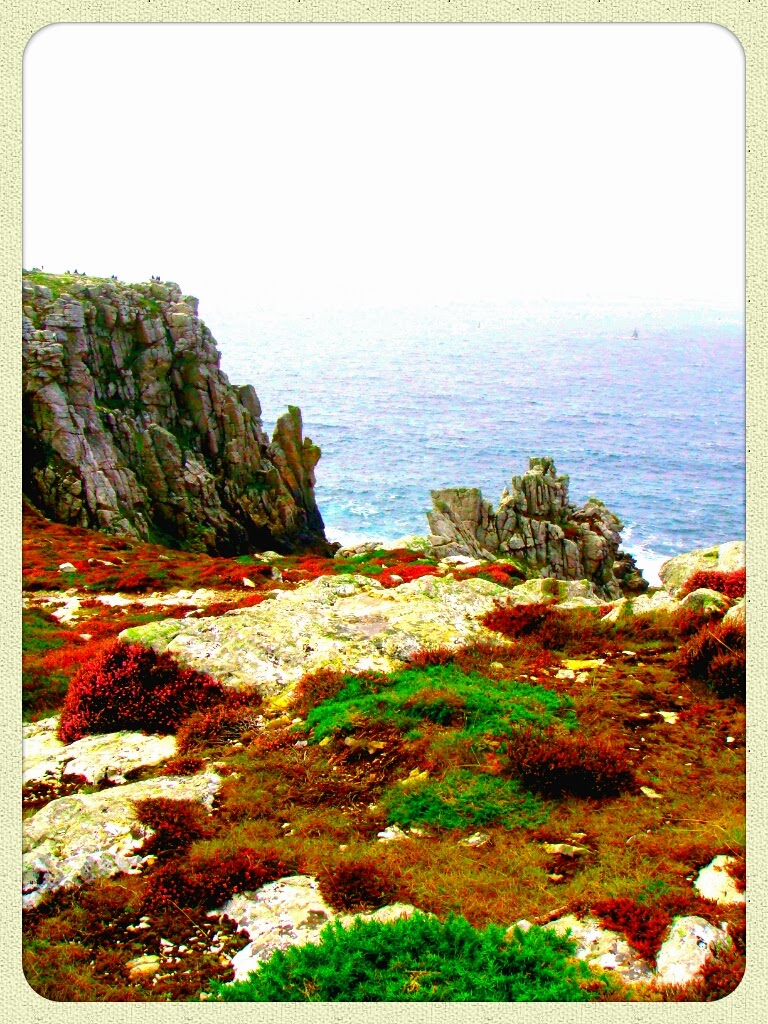 Pointe du Raz has the most beautiful cliffs.
It's all about white rocks, wind-beaten greeneries, air and the salty smell of the sea. 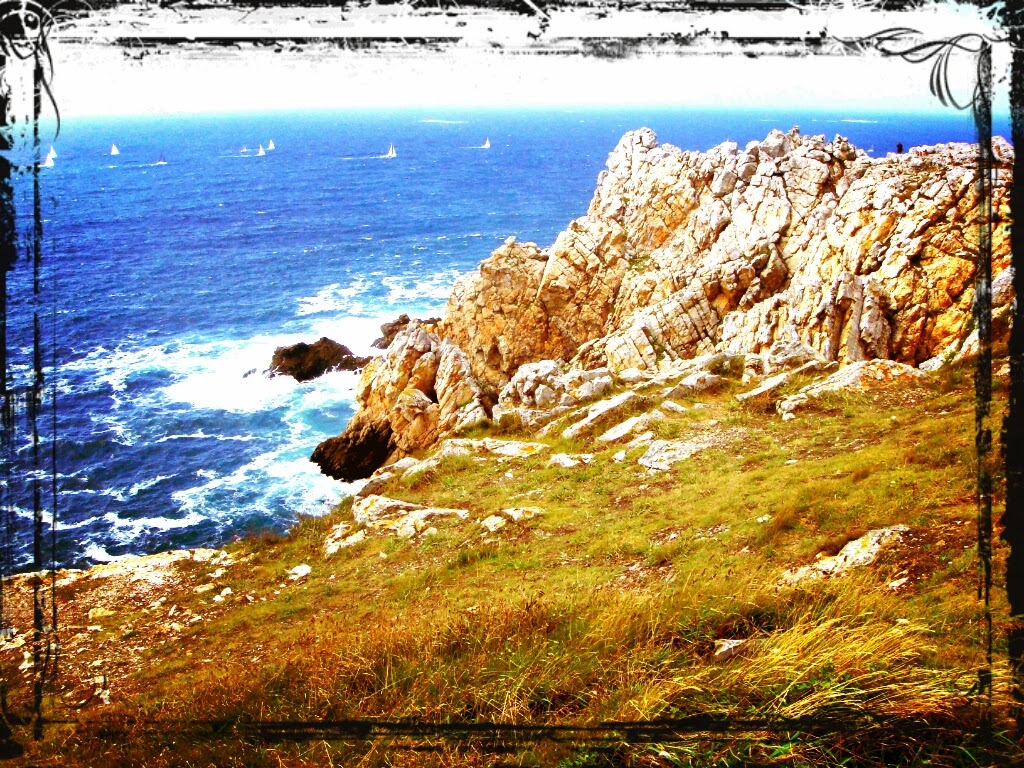 It's one of those places where you open your arms wide towards the neverending blue and you can feel free.
It's a paradise for surfers, but, even if I'm not a surfer, I've felt in paradise as well. I could have spent hours just contemplating: it's the kind of wilderness that brings me peace. 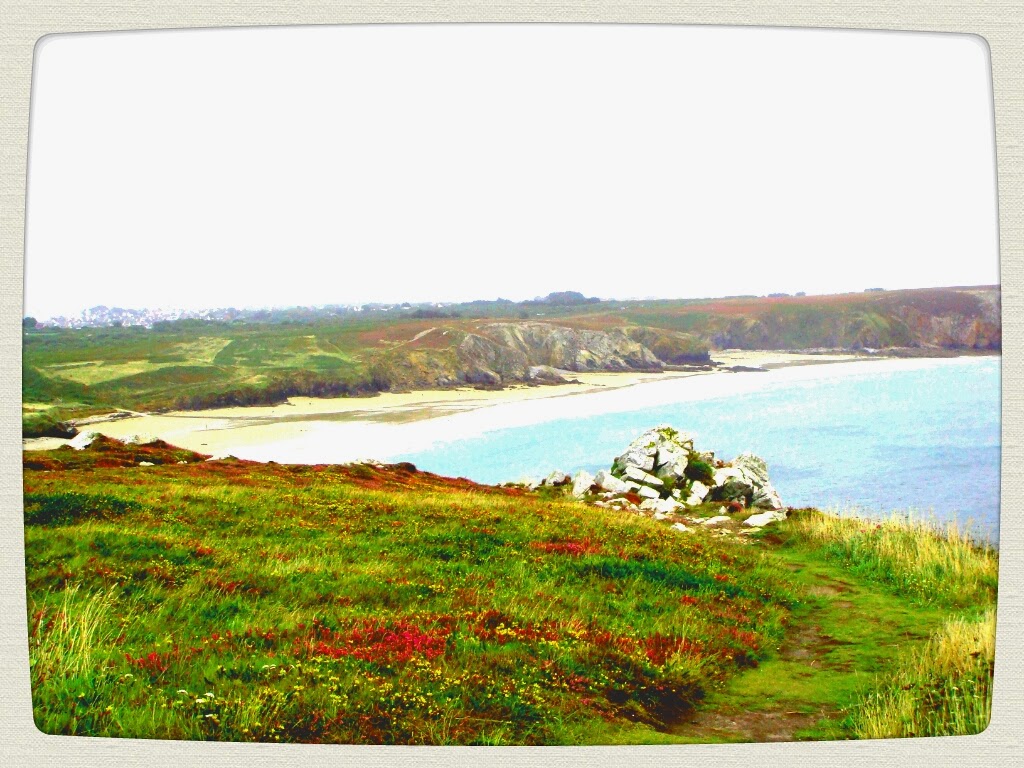 [3] Pink Granite Coast
This coast stretches for over 30 kms in the Cote d'Armor department, between Paimpol and Trébeurden. 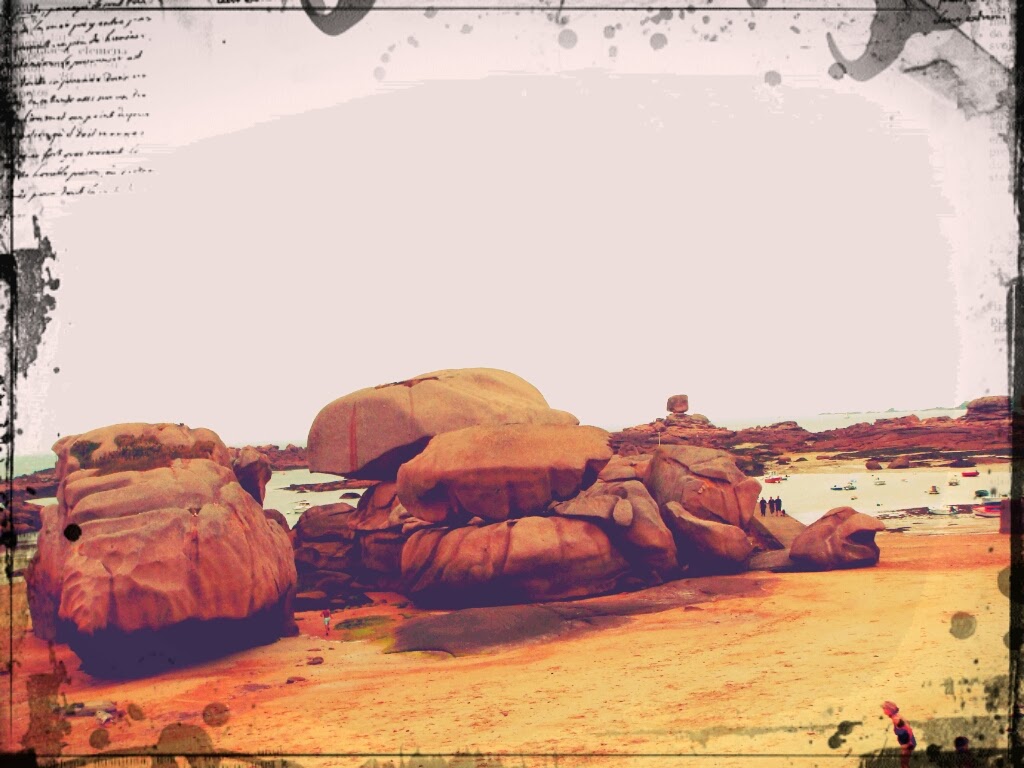 The rocks composing it are not only pink, but have some peculiar shapes that make them look like coming directly from some alien and dreamy landscape. 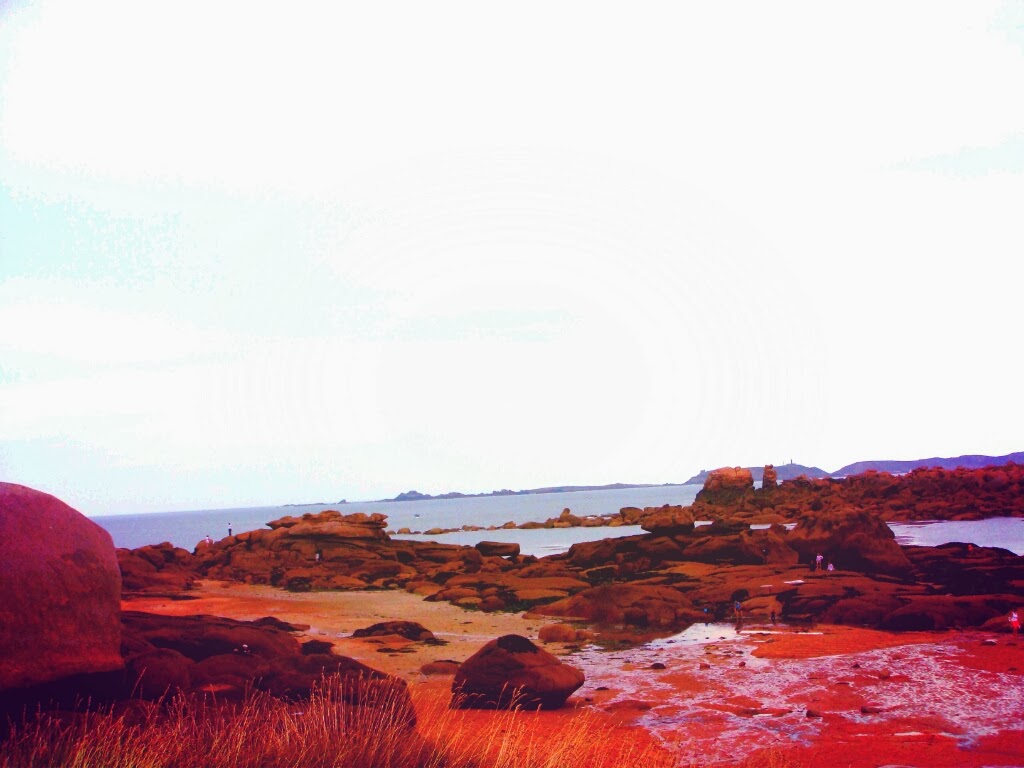 So surreal and enchanting.

[4] Plougastel
This small town is beknown for the most delicious strawberries of the whole Brittany (I haven't gone tasting strawberries along the whole region, but I can assure you that these were yummy indeed) and its calvary, which was built as a thanksgiving for the end of the plague's epidemy that striked the area in the 17th century. 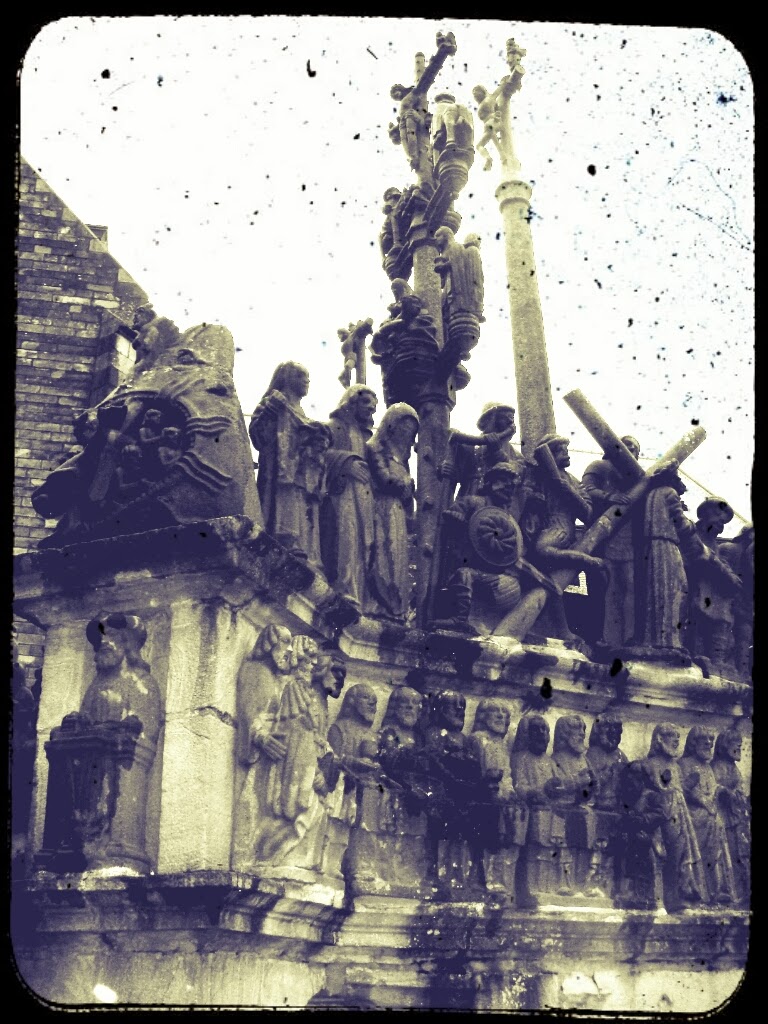 But actually, more than the calvary, I've been charmed by the small church besides it. 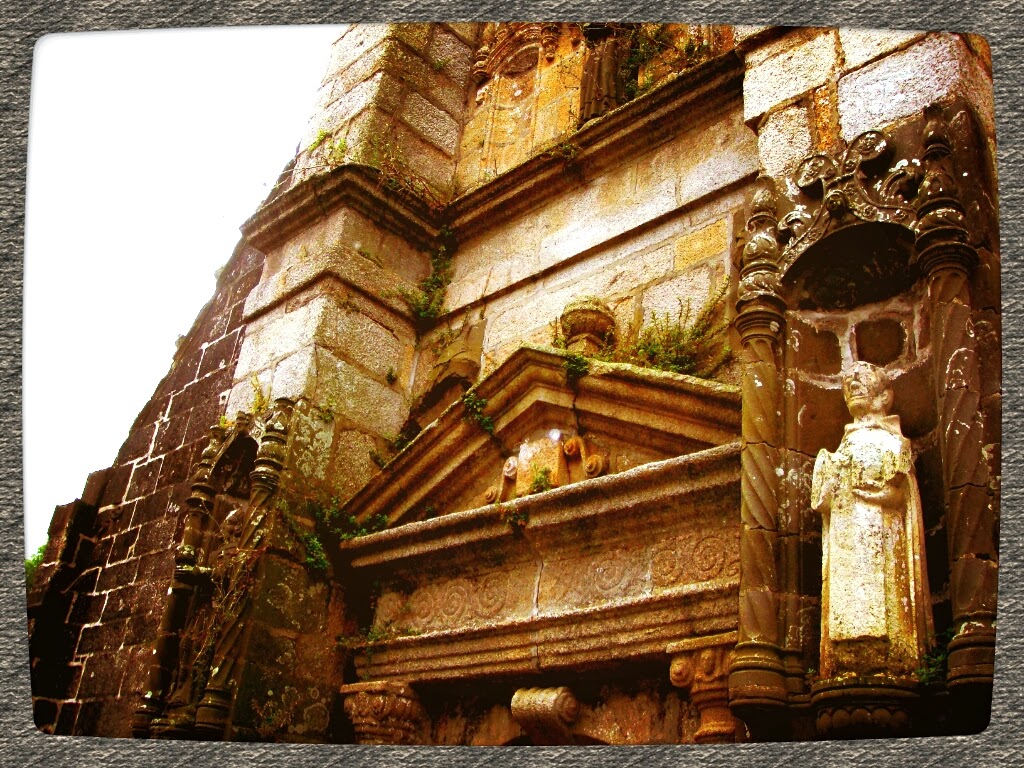 Stepping inside it has been like finding an alternative, more humble to travel back to the religious dimension of Middle Ages, rather than the rich and elaborate Gothic cathedrals.

[5] Locronan
Another small and beautiful village where time seems to have stopped since the Middle Ages.
The atmosphere has a kind of gothic charme that may look dark to some but that is totally bewtiching to me. 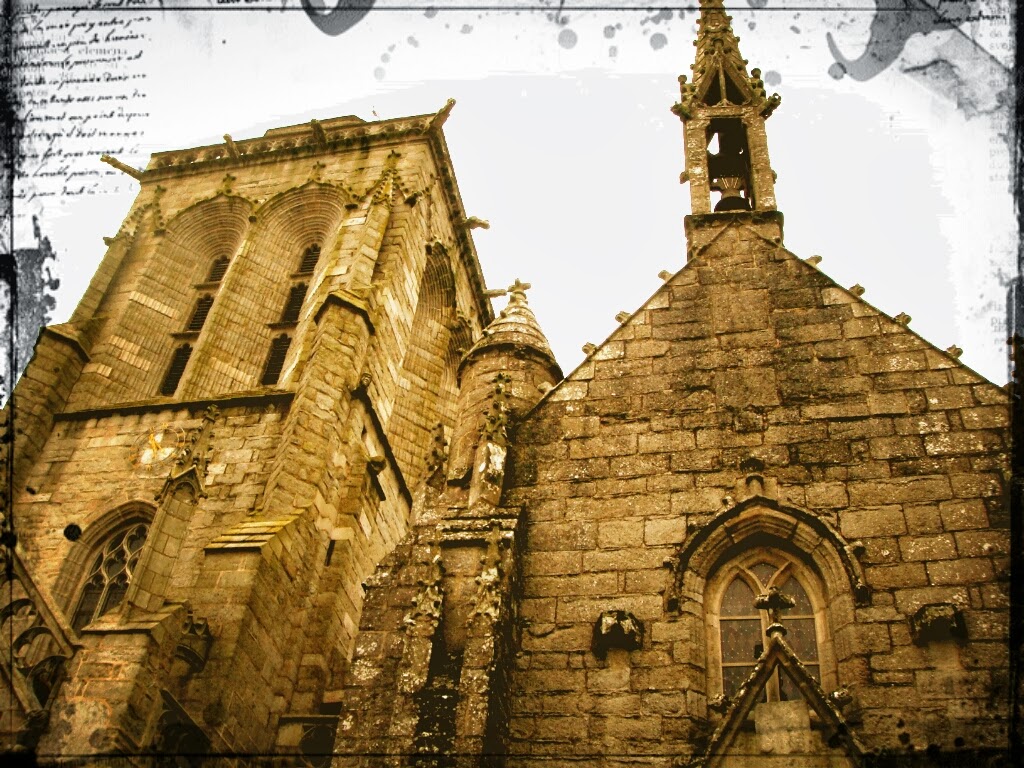 I've loved wandering around the alleys, the square, the tiny shops and the beautiful cathedral. 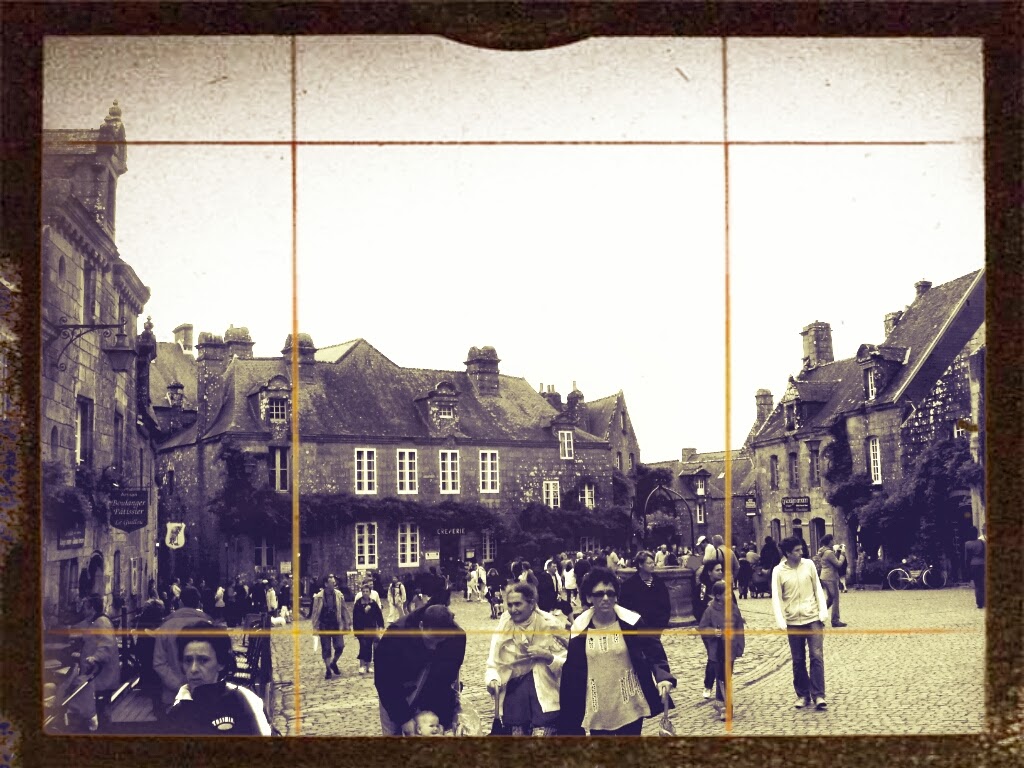 In ancient times there used to be a spot for druidic cults where now there is the village - and indeed you can still breathe the magic. 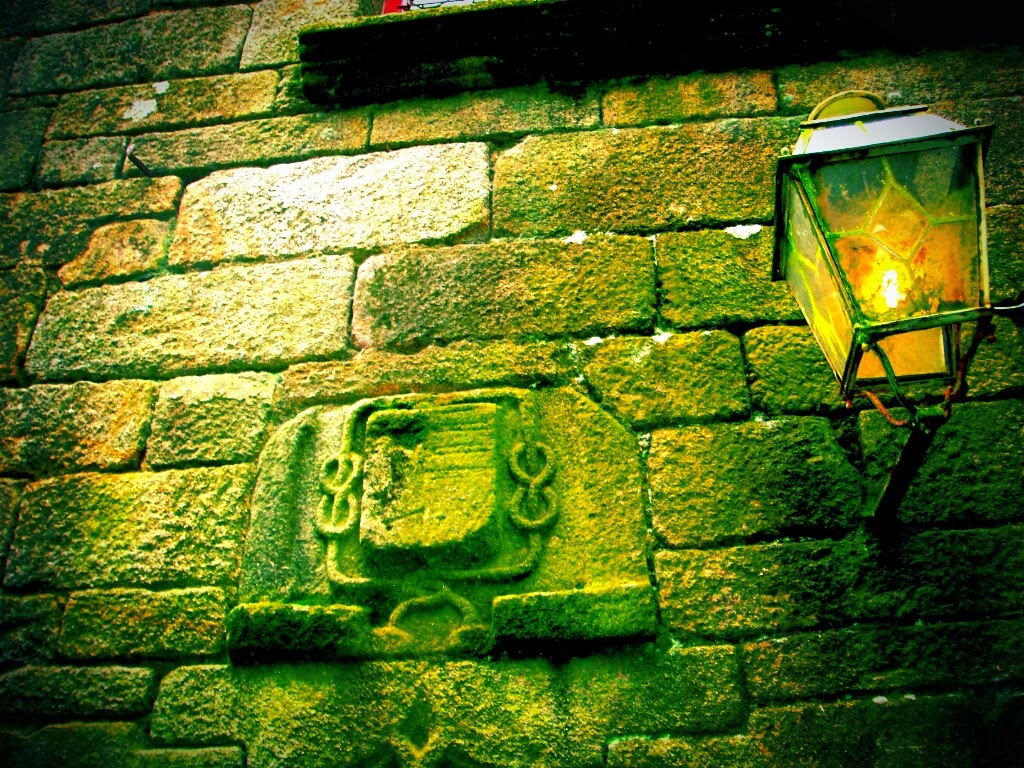 [6] Camaret
It is known for the coquillage at its restaurants - mussels, basically, but also other seashells. 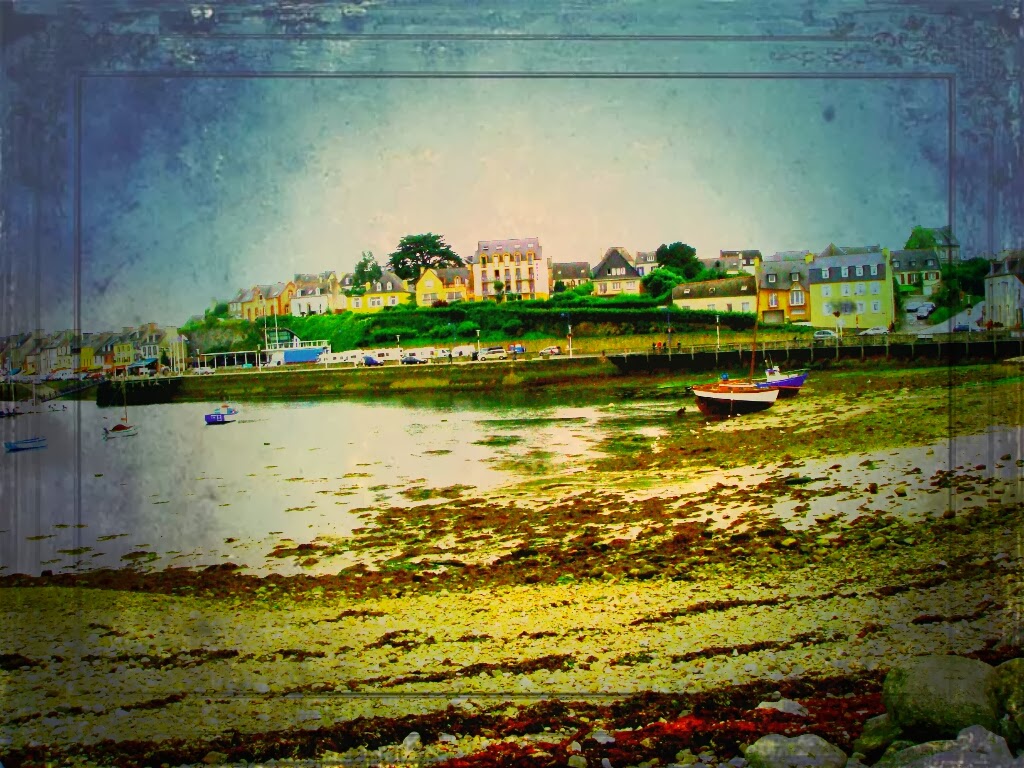 Actually I didn't taste them, but I've totally enjoyed the cosyness and the old-style charme of this small seaside village: rugged beaches, stone houses and many lovely spots. 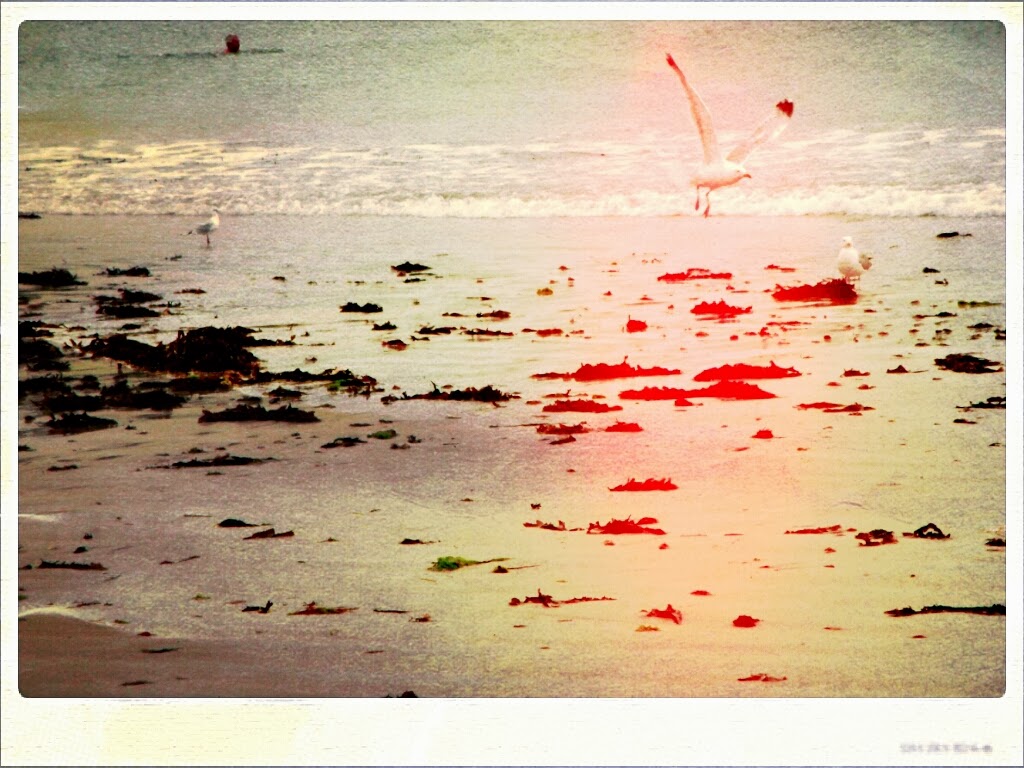 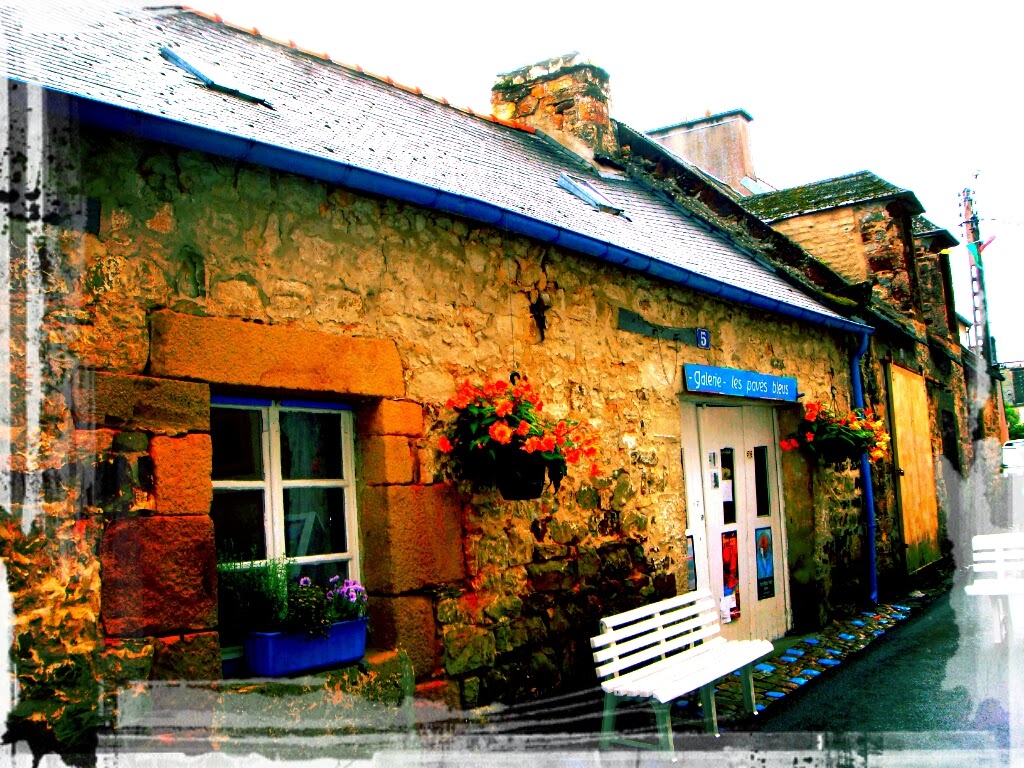 [7] Concarneau
The Medieval part of it, called Ville Close ("Closed City"), is actually a small treasure locked inside the city walls that surround the long island in the center of the harbour. 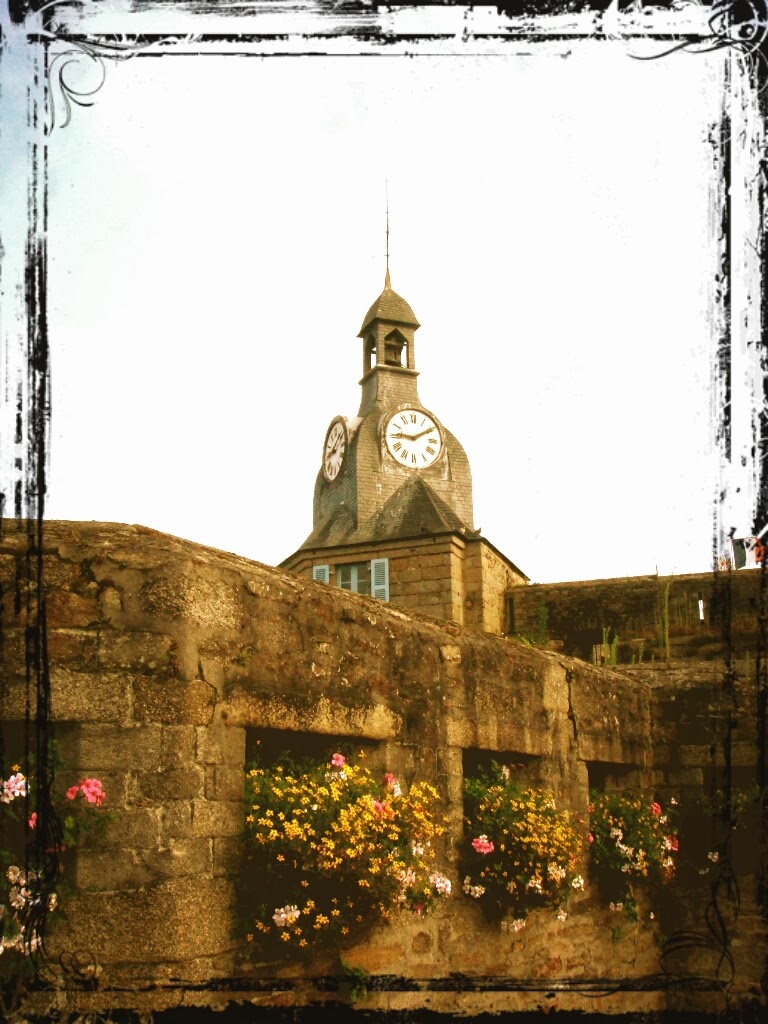 It is devouted to tourism, as you can notice from the many restaurants and souvenirs shops that you can find in the alleys, but still it feels like something genuine. 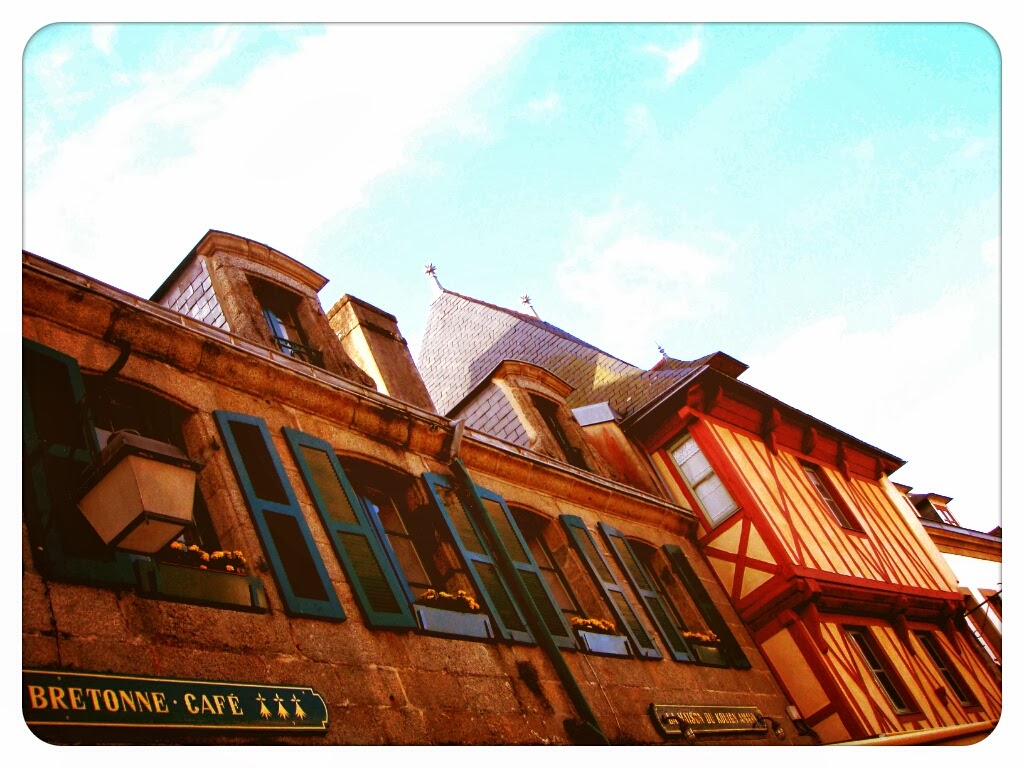 [8] Vannes
This fortified city exists since more than 2000 years and really seems to be taken out from a fairytale.
You might expect Prince Charming galloping on his white horse coming out of a sudden from a courtyard, or some damsel in distress calling for help from one of the towers where she's being held prisoner by a dragon. 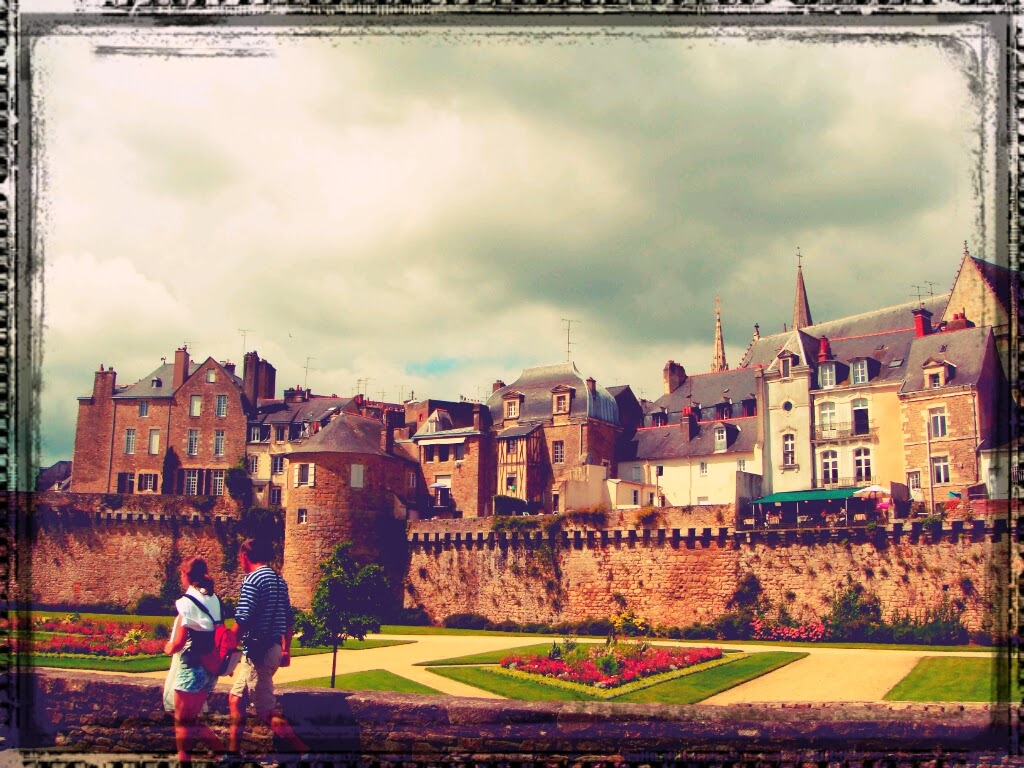 It actually looks more Norman than Briton, because of its more massive architecture and the trellis houses, but geographically it's still in Brittany. 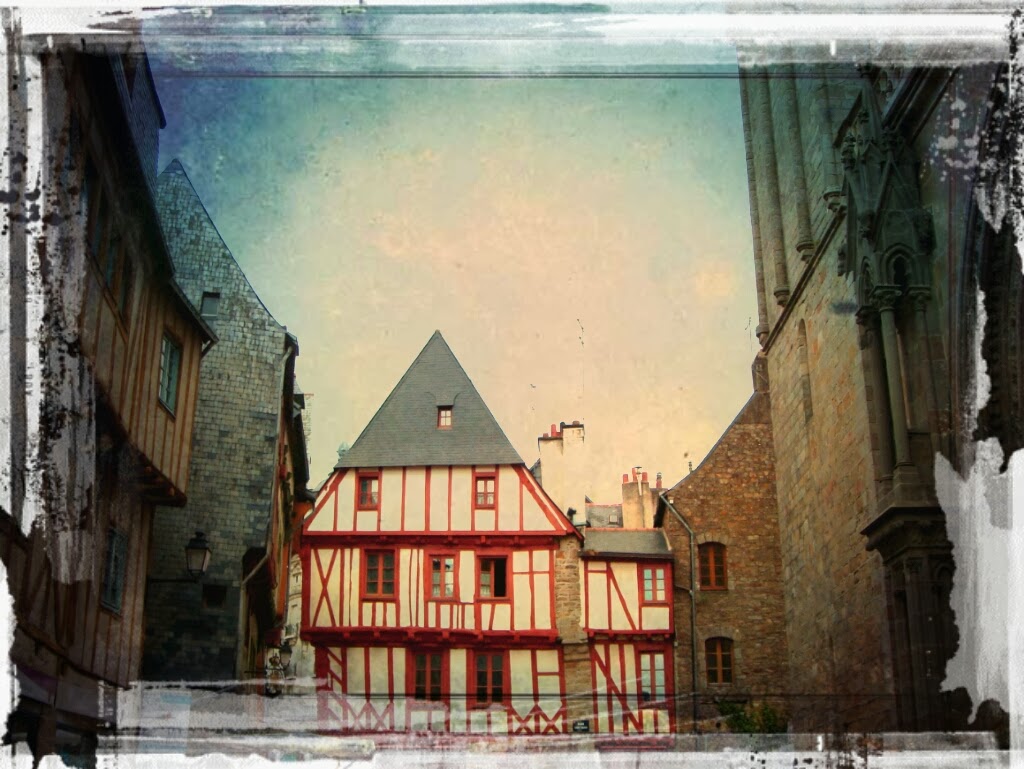 The city is a jewel, but the casket that hides it is equally luxurious, with its incredibly beautiful garden that crowns the city's walls.

[9] Carnac
Carnac is renowed for its menhirs - and by this I don't mean that there just two or three of them.
No way, in Carnac there are just menhirs everywhere, rows and rows of menhirs, hundreds, thousands of them. You will get an overdose of prehistorical stones here. 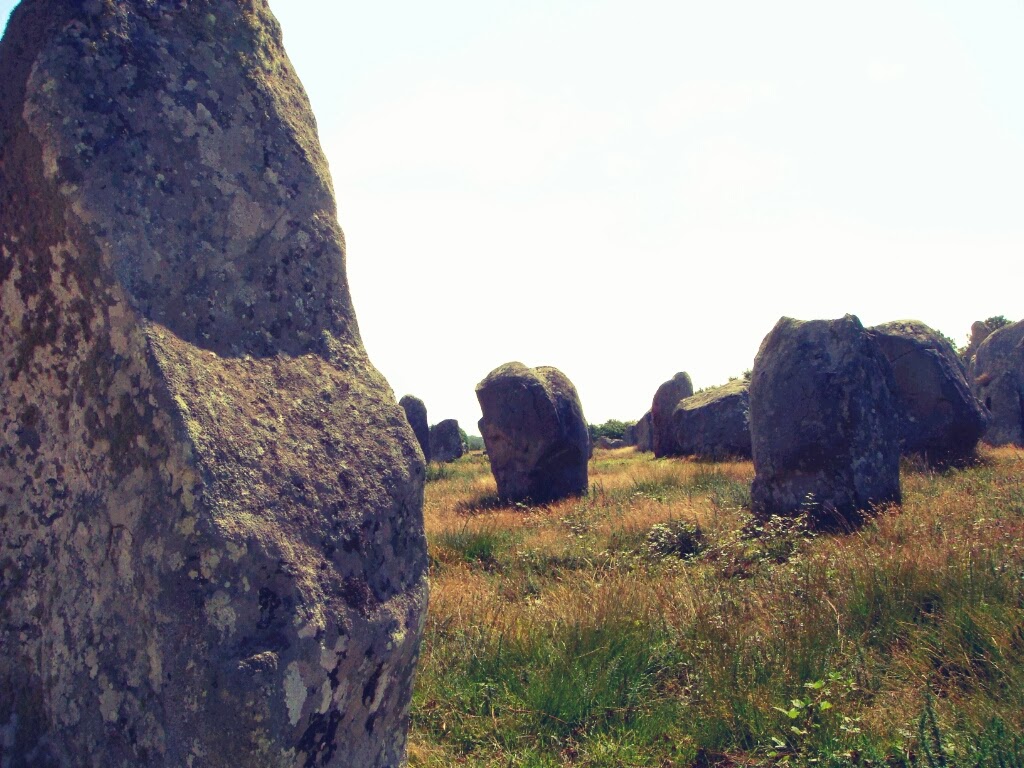 Celtic people surely had a big work to do, to plant all these stones. I keep on wondering which meaning might they have... 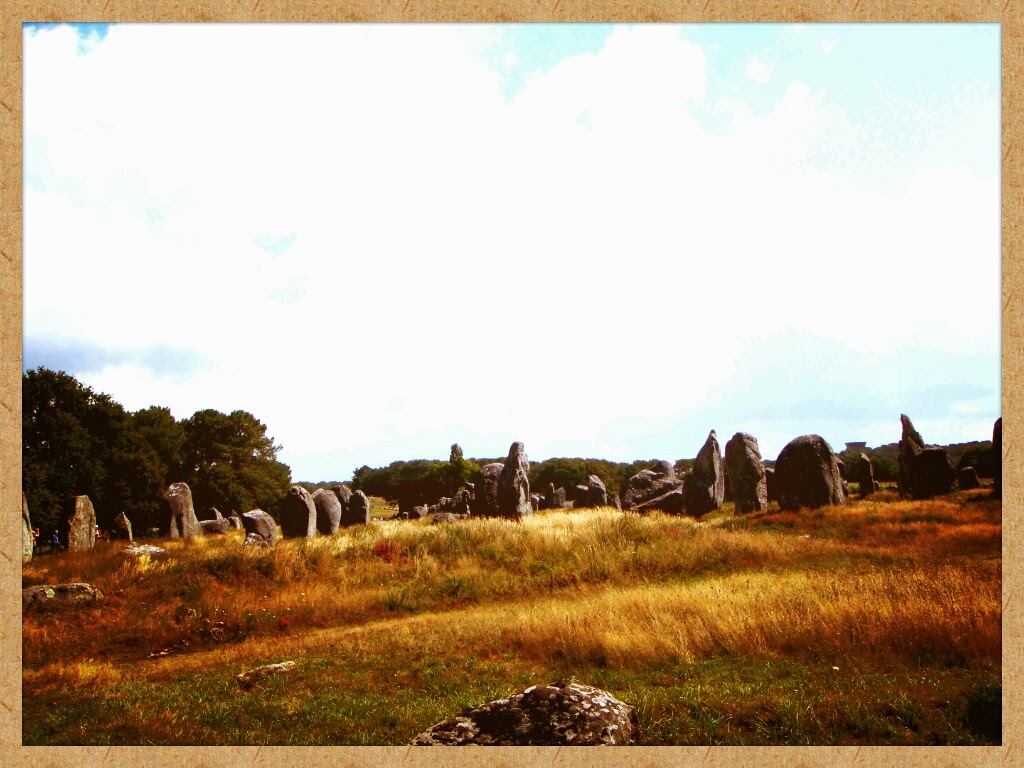 Actually the legend claims they are a Roman legion transformed into stones by Merlin - so this would be a  good explanation.

[10] Quimper
Another town with a beautiful vernacular architecture, but that has a more distinctive breton charachter compared to Vannes. 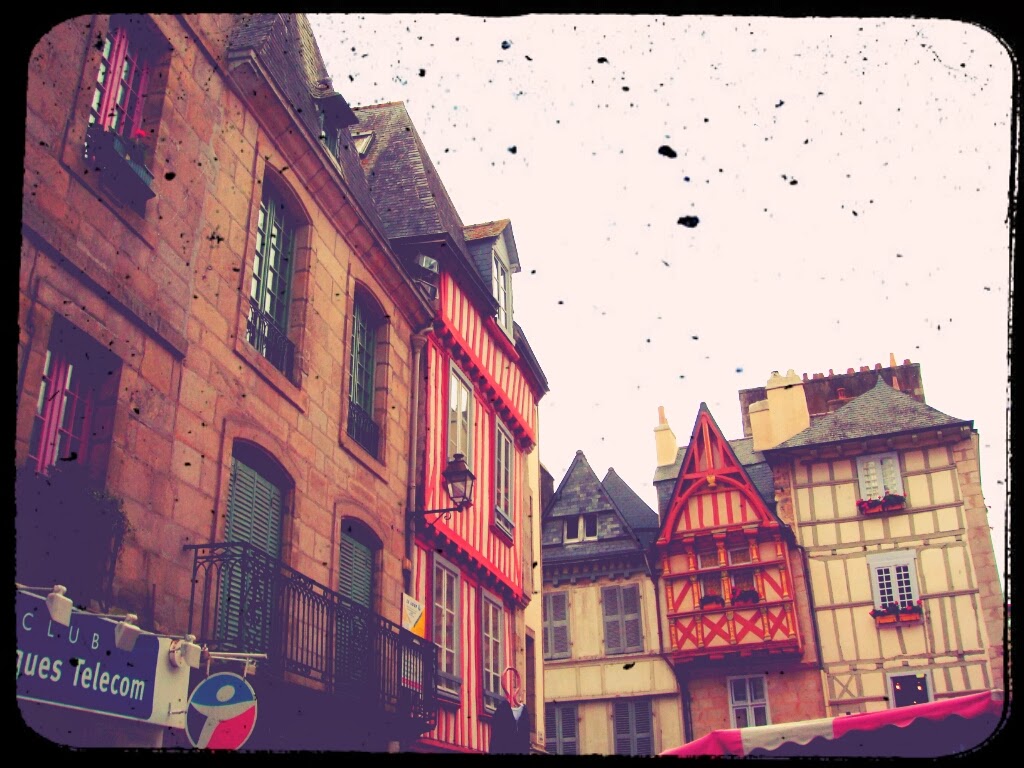 There is a rustic and cosy atmosphere in it, with its footbridges crossing the rivers that flow through it, the gothic chruch, the half-timbered houses and the pedestrian alleys full of creperies and shops.
Because anyway you can't leave Brittany without having tasted an original crêpe bretone!