Happy St Patrick's Day everyone!!
No, we don't celebrate it in Italy: I guess they do something in some random pub, but that's nothing like "real" celebrations. I usually wear green on this day, but, since it's something I like doing on a regular basis, I guess nobody really notices that it's made on purpose.
Then, here, March 17th (besides being my best friend's birthday) should be the birthday of our country as a nation, since Italy got unified on this day in 1861 - but nobody cares about this either.
But - well, since I usually like boasting around telling that I have Celtic blood in my veins (I have no evidence of that, besides my pale skin, my green eyes and the way my heart skips a beat whenever I reach what I call my homeland - but who needs scientific proofs after all?), and since Irishs have a legend about a big black cat wandering around their bogland who is supposed to bring a very big amount of luck to whomever meets him (and living in a country where black cats are ignorantly considered as a symbol of bad luck, I can't help but being grateful about it); here I go, following the flow and doing what every single travel blogger on the planet is doing today - an Ireland related post!!
I guess this should have been part of the "Down the Memory Lane" section, since it's been since 2005 already that my paws don't step over the Emerald Island's soil (OMG); but to me it still feels like yesterday, so here we go with some random impressions and memories about some of the places that I've liked the most. 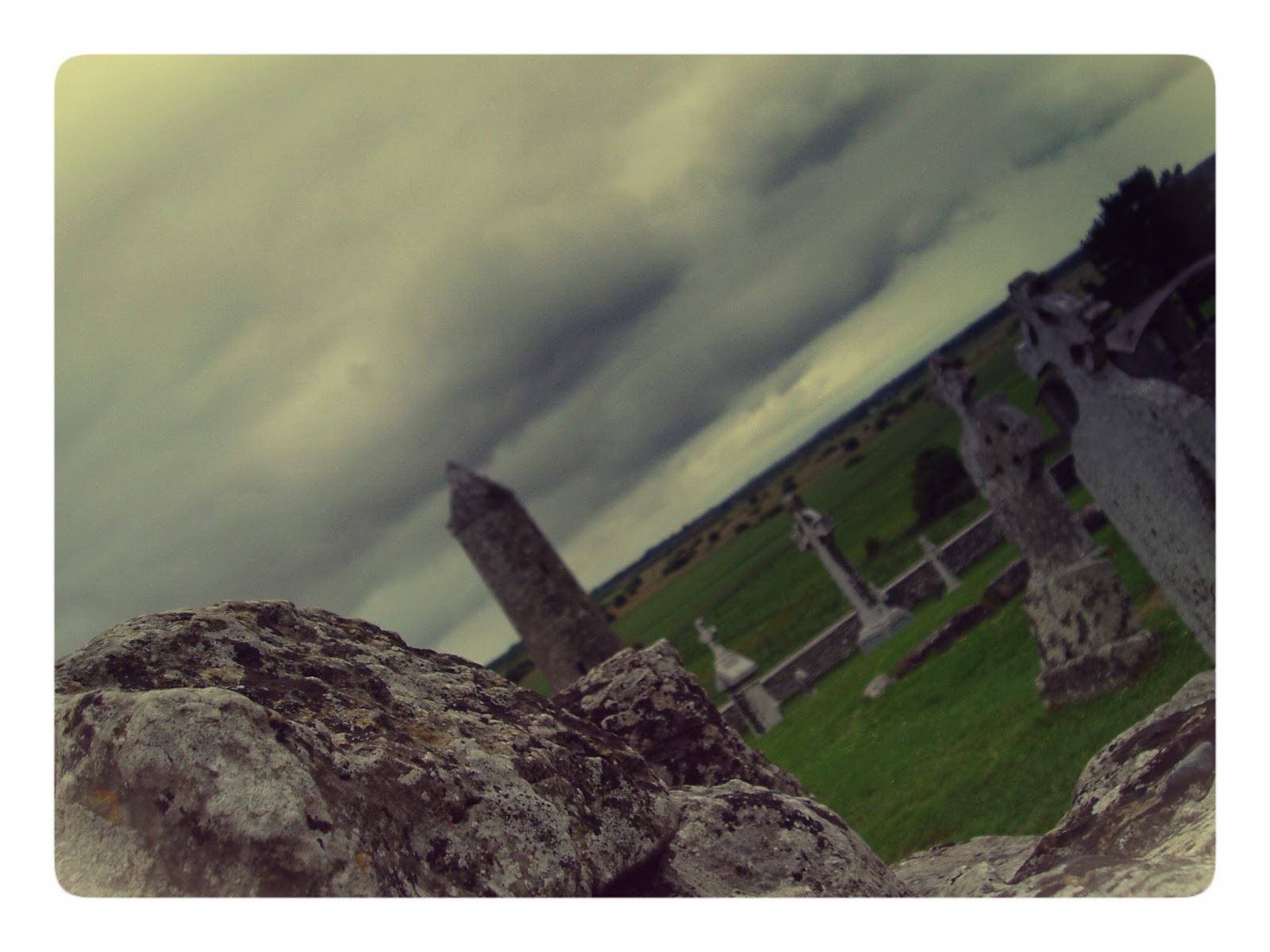 This is one of the very first places I've seen and that had made me go like "Omg, I'm in Ireland at last!". My trip there had been a long daydreamt and dued one, one of those trips you wish for for years, and that, when you are there, makes you feel hard to believe you are finally achieving it, you are finally there, in the land you've been dreaming about for so long: I remember that, when our plane had landed in Dublin, I was even touched to see the shamrocks on the Aer Lingus airplanes, LOL. 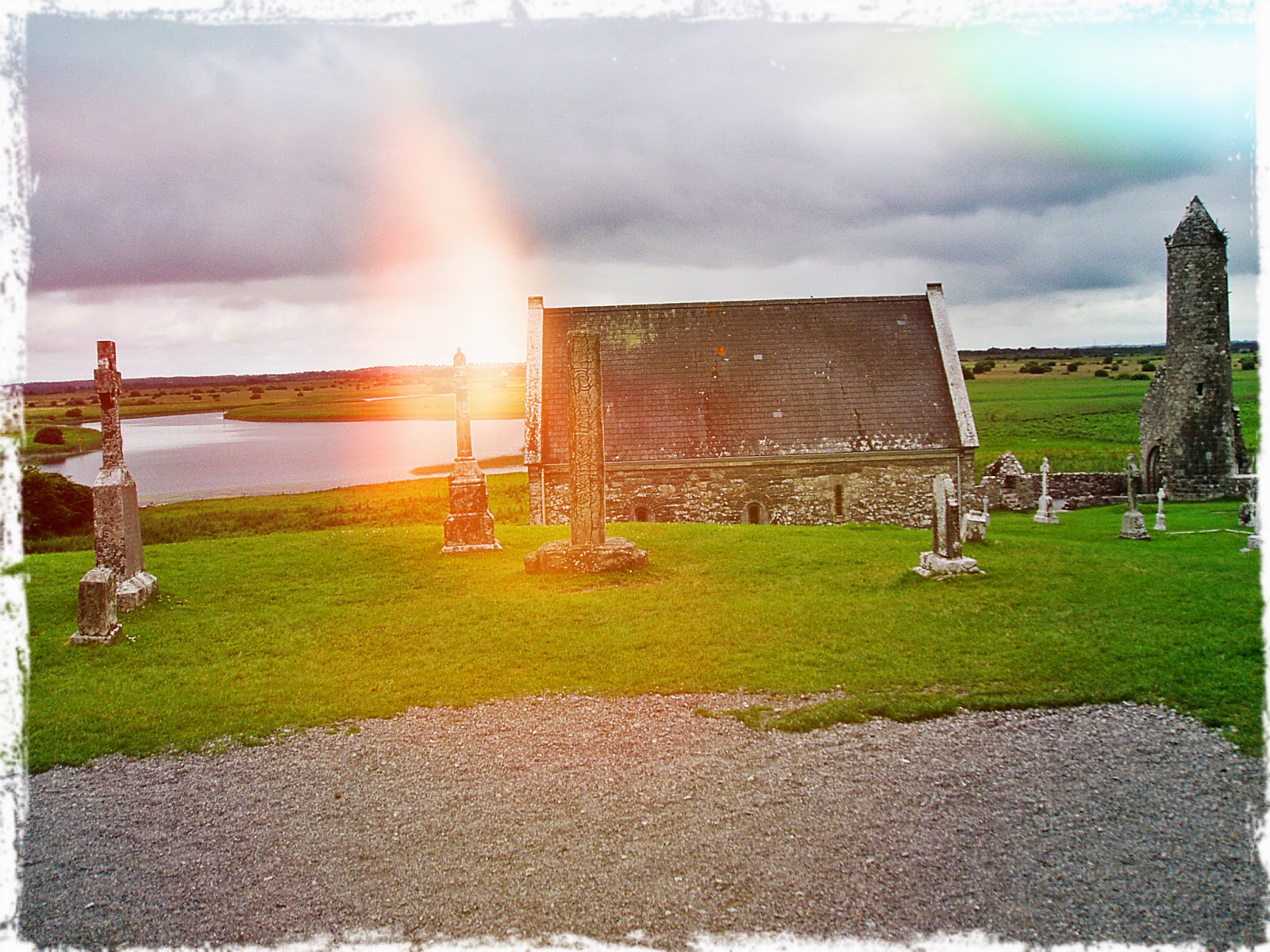 Well, Clonmacnois surely shows much more of the spirit of Ireland than the airplanes.
It's a monastic ensemble that dates back to 500 DC and it had been very powerful and important, but it has undergone to lootings and distructions by Vikings and English invaders.
Its ruins are still pretty much solid anyway and you can still get an idea about how beautiful this group of churches, buildings and tombs it was. 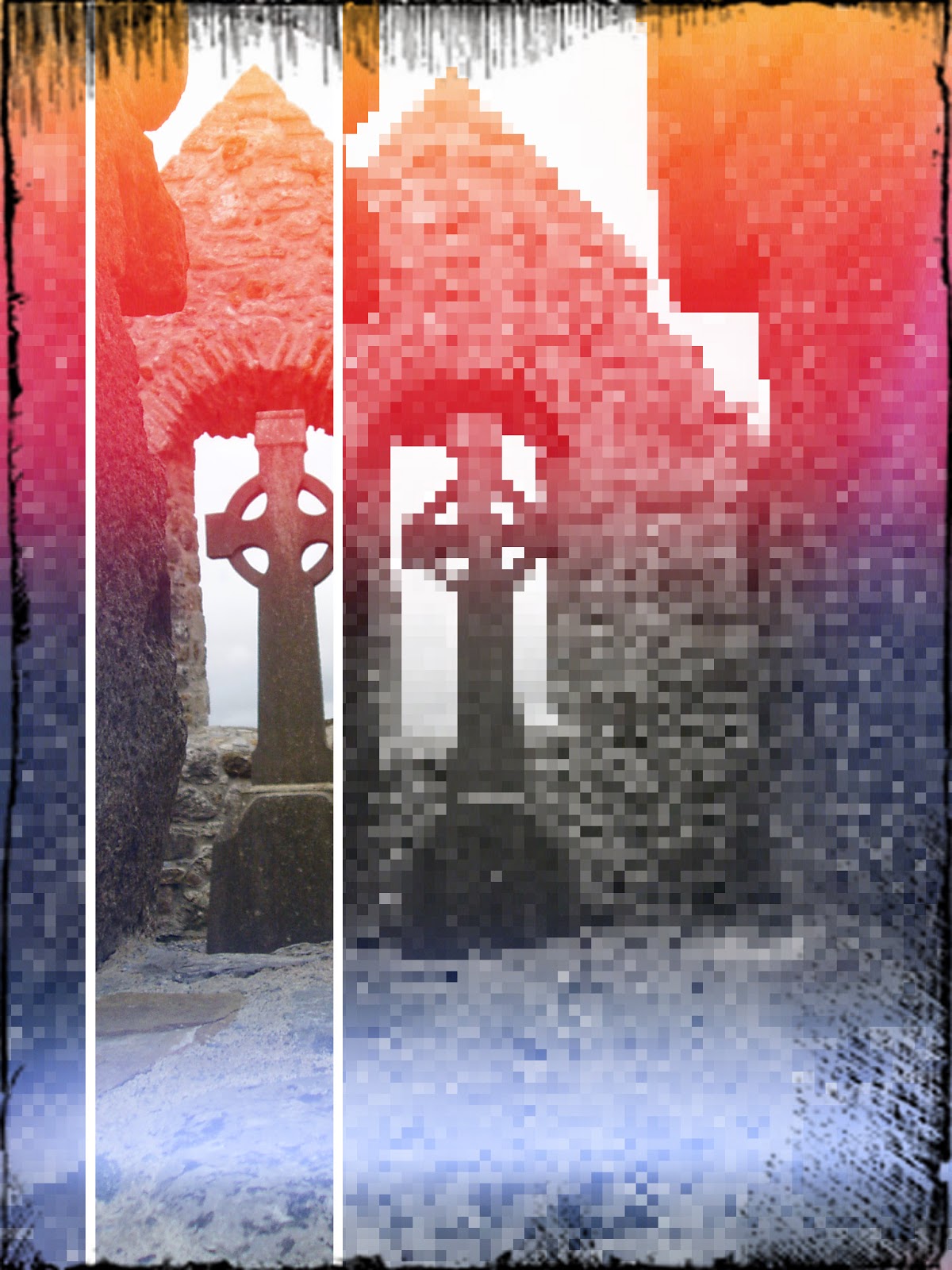 Seeing the holy and melancholic majesty of the Celtic crosses that stand out against the infinite green expanse, with a veil of mist and the mirror of water of the river Shannon at its feet is simply breathtaking. 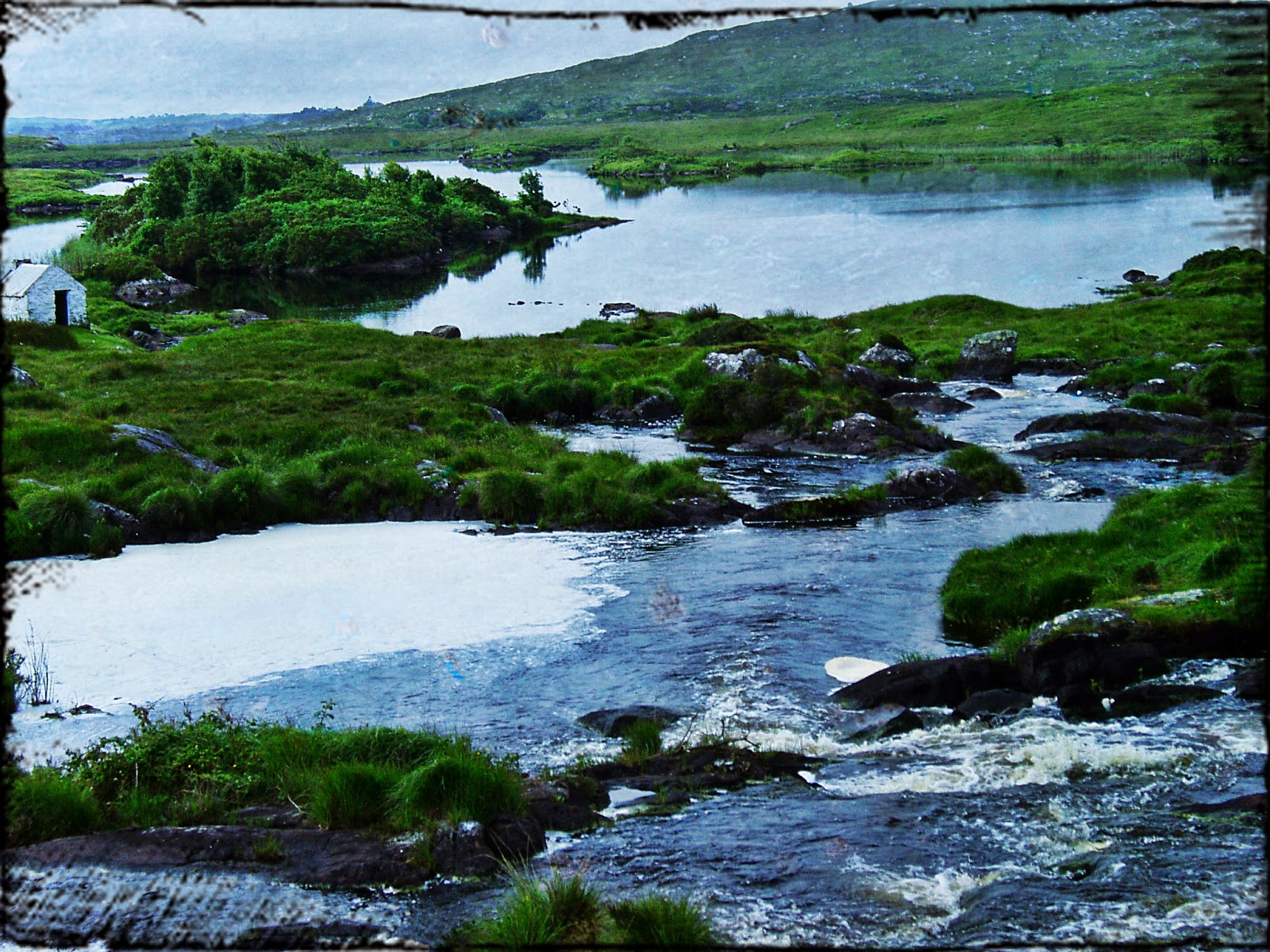 My first thought when crossing Connemara region has been "Oh, so that's true! It does actually exist!!": the kind of landscape I was visualizing in my mind when reading fantasy books, or simply when daydreaming, was finally there in front of my eyes, so perfect and so real, even more beautiful than what I could ever conceive. 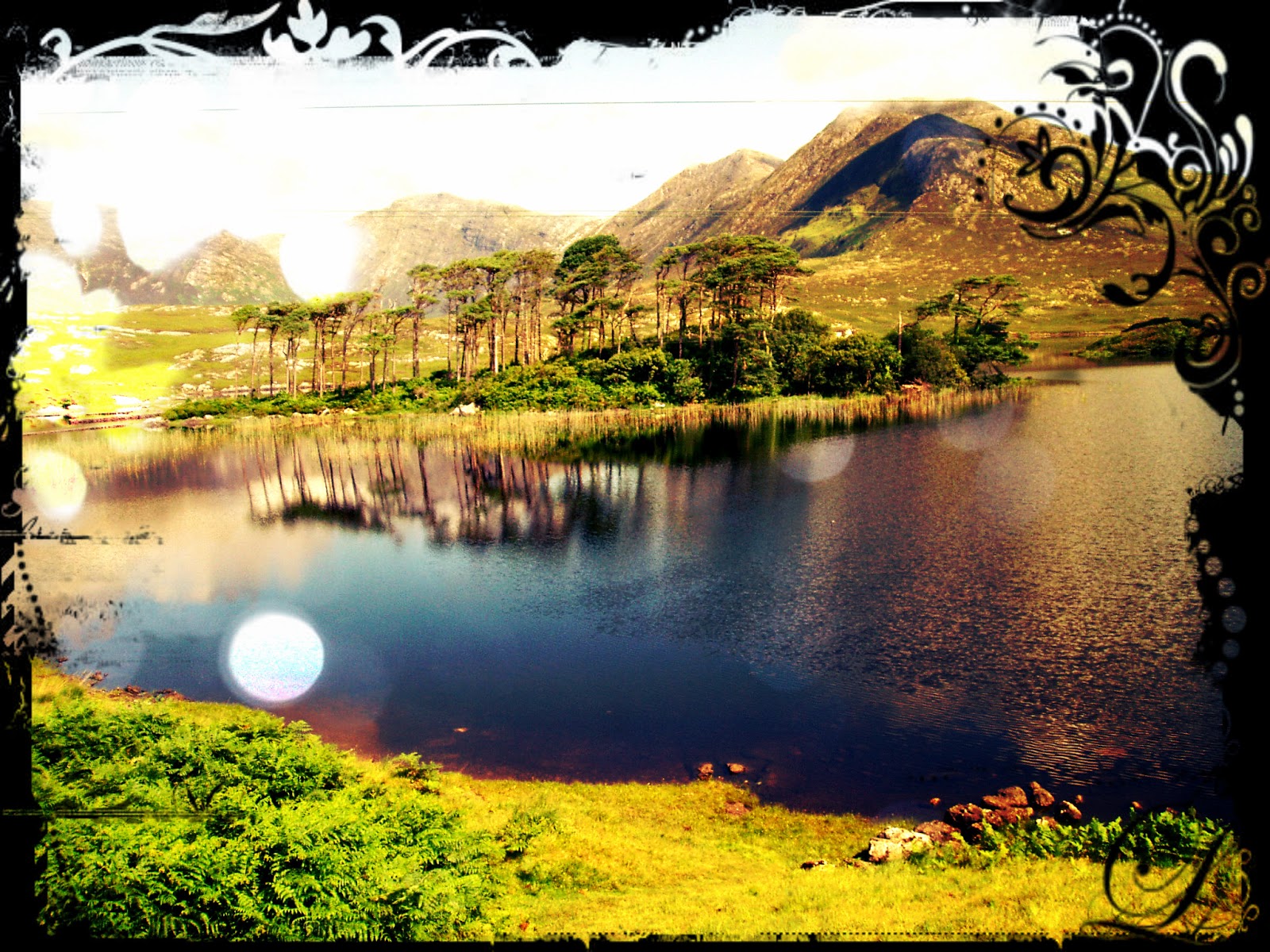 It *was* real, I could touch it, I could walk along it, trample its moor - but still it had something surreal: the sky was moving and changing its colors every instant you were looking upon, the grass was so green it seemed painted, the atmosphere was rare and misty - and all in all you were feeling like being in a live fairytale. 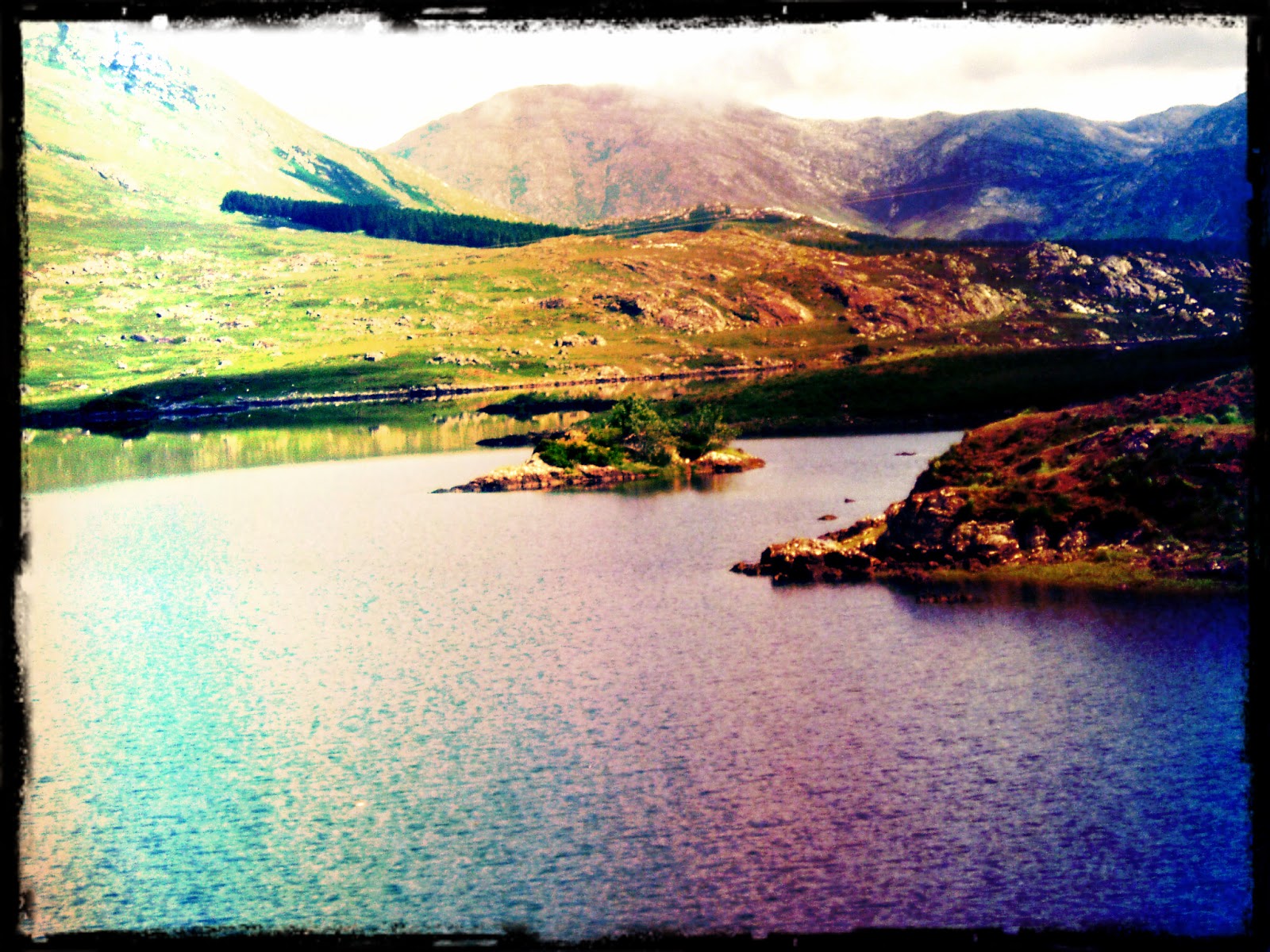 I was keeping silent, because I was expecting to see a fairy, or an old times hero, coming out from round the corner... 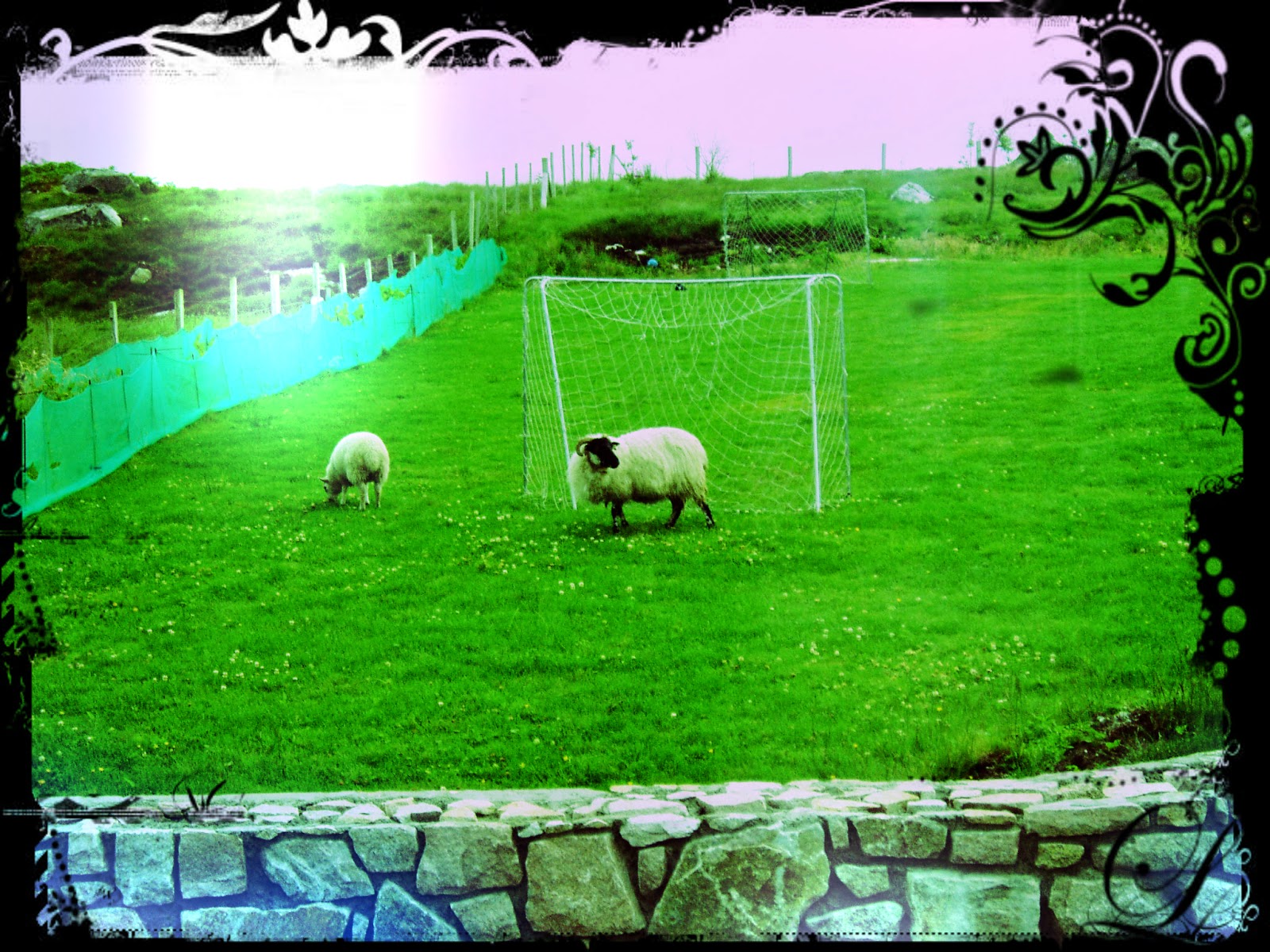 All I could see was a sheep playing soccer; but now that I'm talking about it, I'd really want to go back so badly.
I really wouldn't mind to stay just in Connemara, and explore the whole region just by feet, losing myself there like it happens to some wayfarers in some local folk tales... 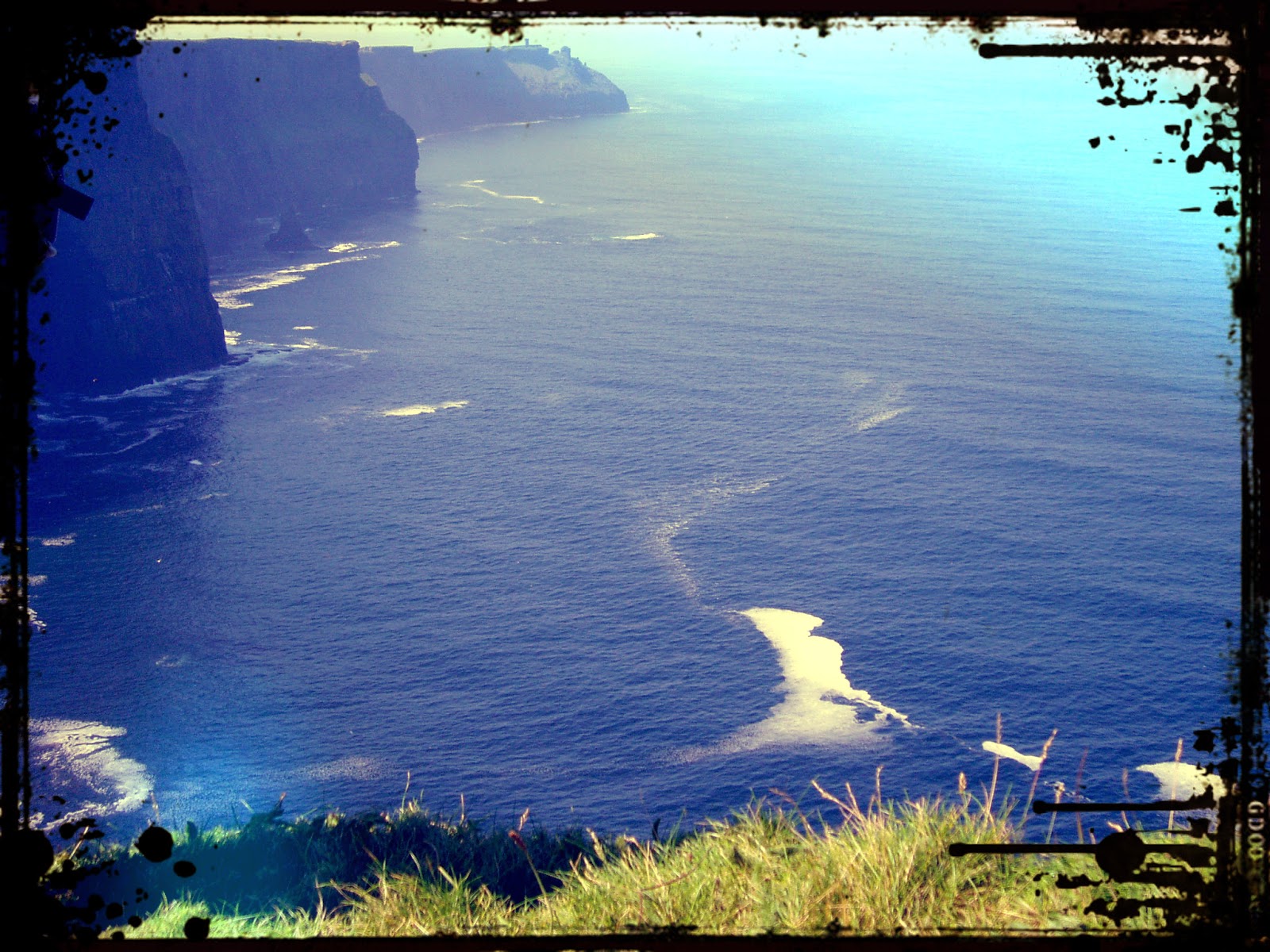 Well, this is one of the most iconic spots of Ireland.
Unfortunately, I'd say, because they are therefore also uber-crowded all the time.
And when I visited them the path coasting them (which is 8 km long) was mostly closed because of works in progress, so the crowd was all squeezed in basically just one point... 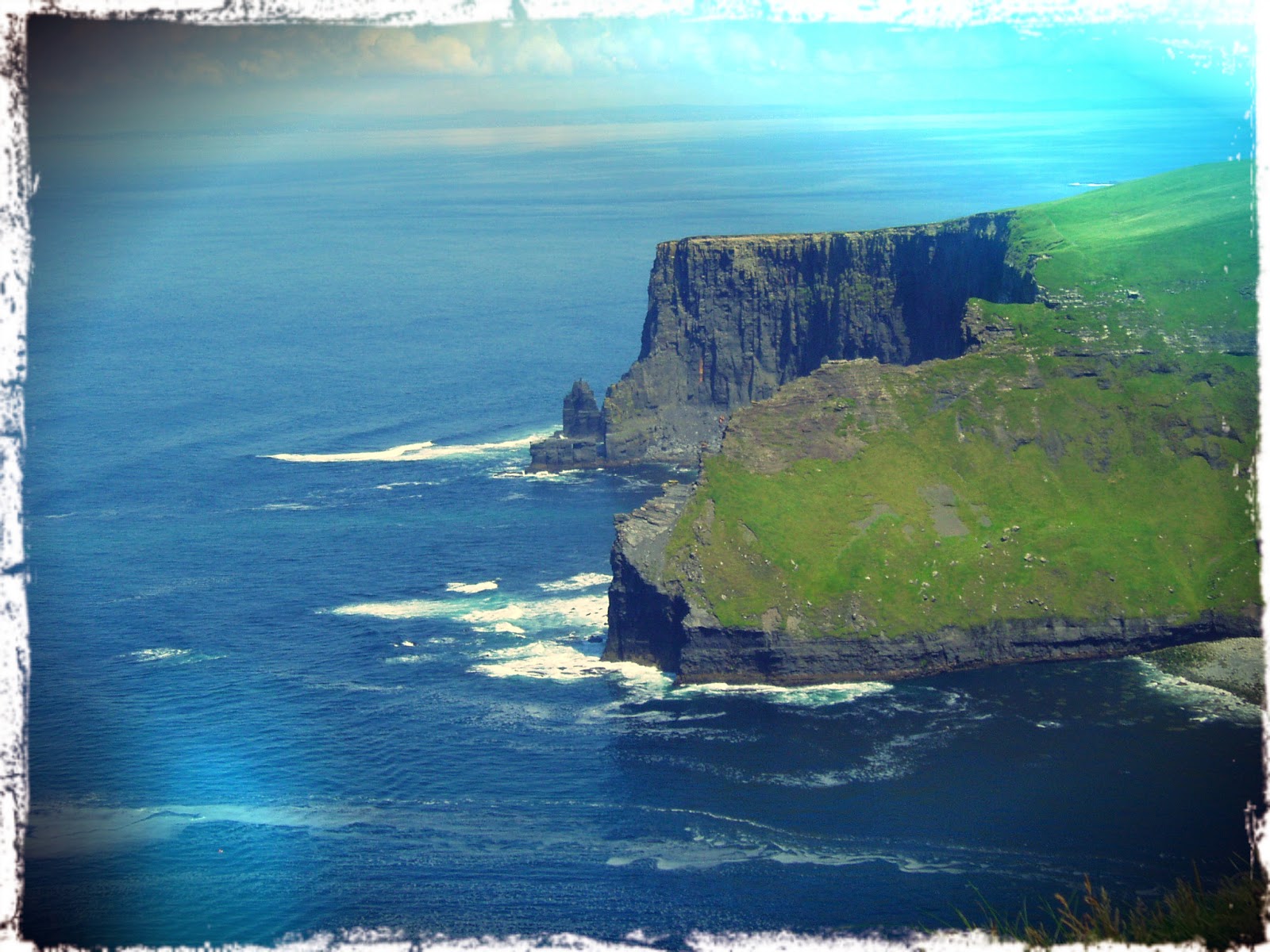 But, anyway, nothing to say: the view is absolutely stunning and worth all of its fame. I even conquered my vertigo fear here (which, back to those time, was pretty considerable), because I simply couldn't miss looking down and enjoying such a breathtaking view. 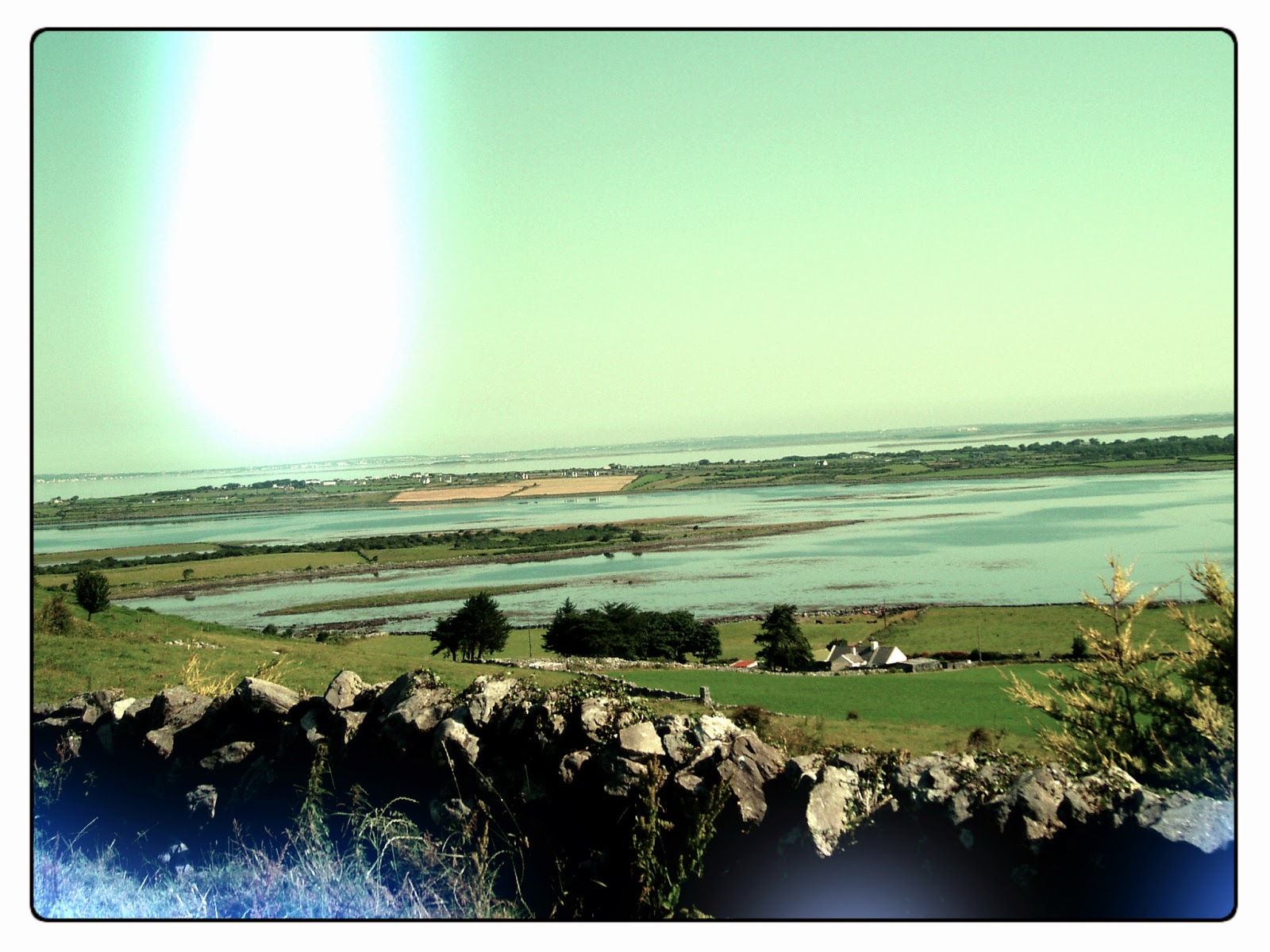 The "Ring" is actually a road, or better, an itinerary, of about 200 kms, around the Iveragh peninsula.
It's famous because it offers the most stunning collection of panoramic points of view above the sea, but also some pretty historical sites, such as this Norman castle. 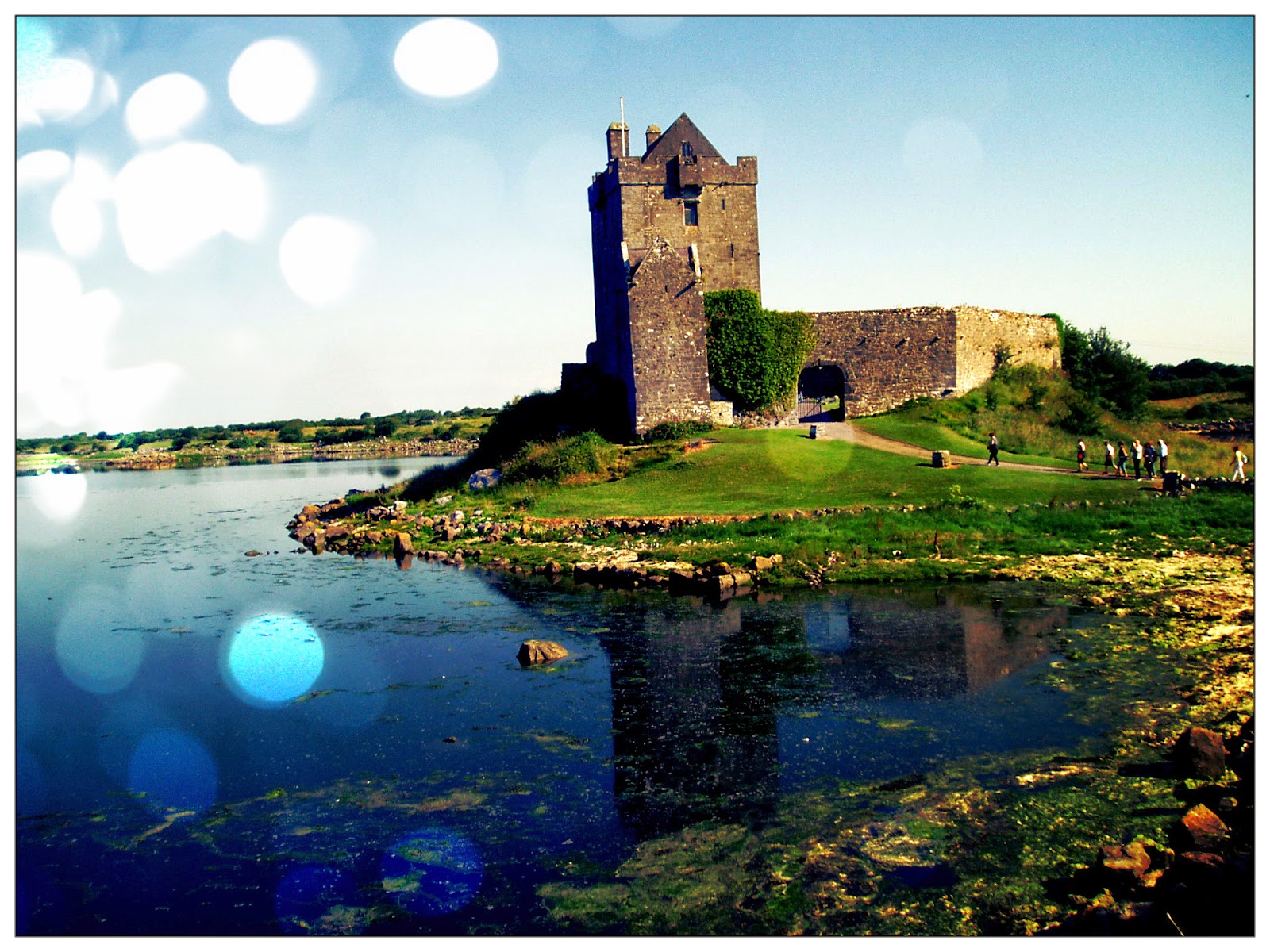 Then beaches, colorful houses and of course a lot of green. 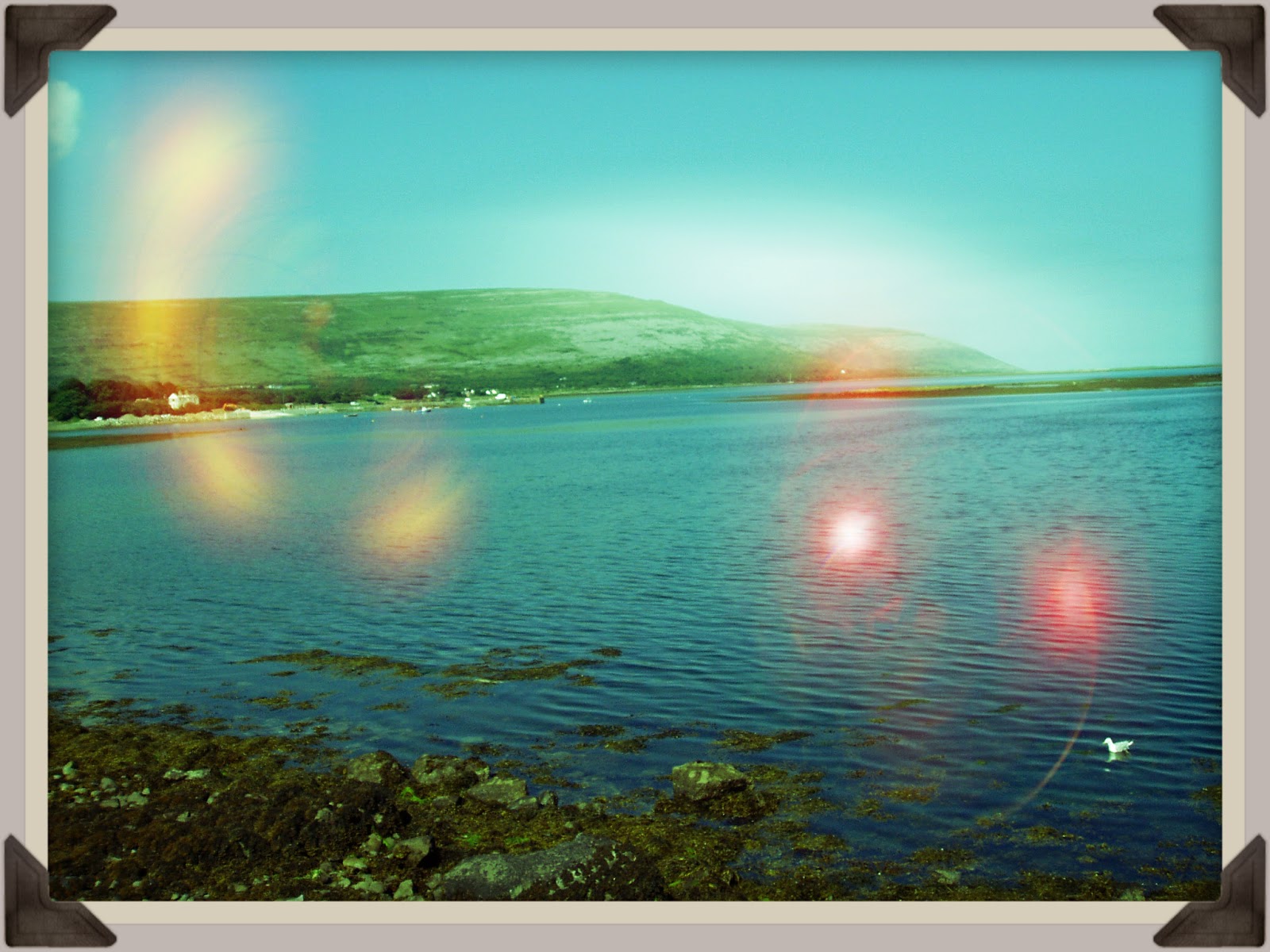 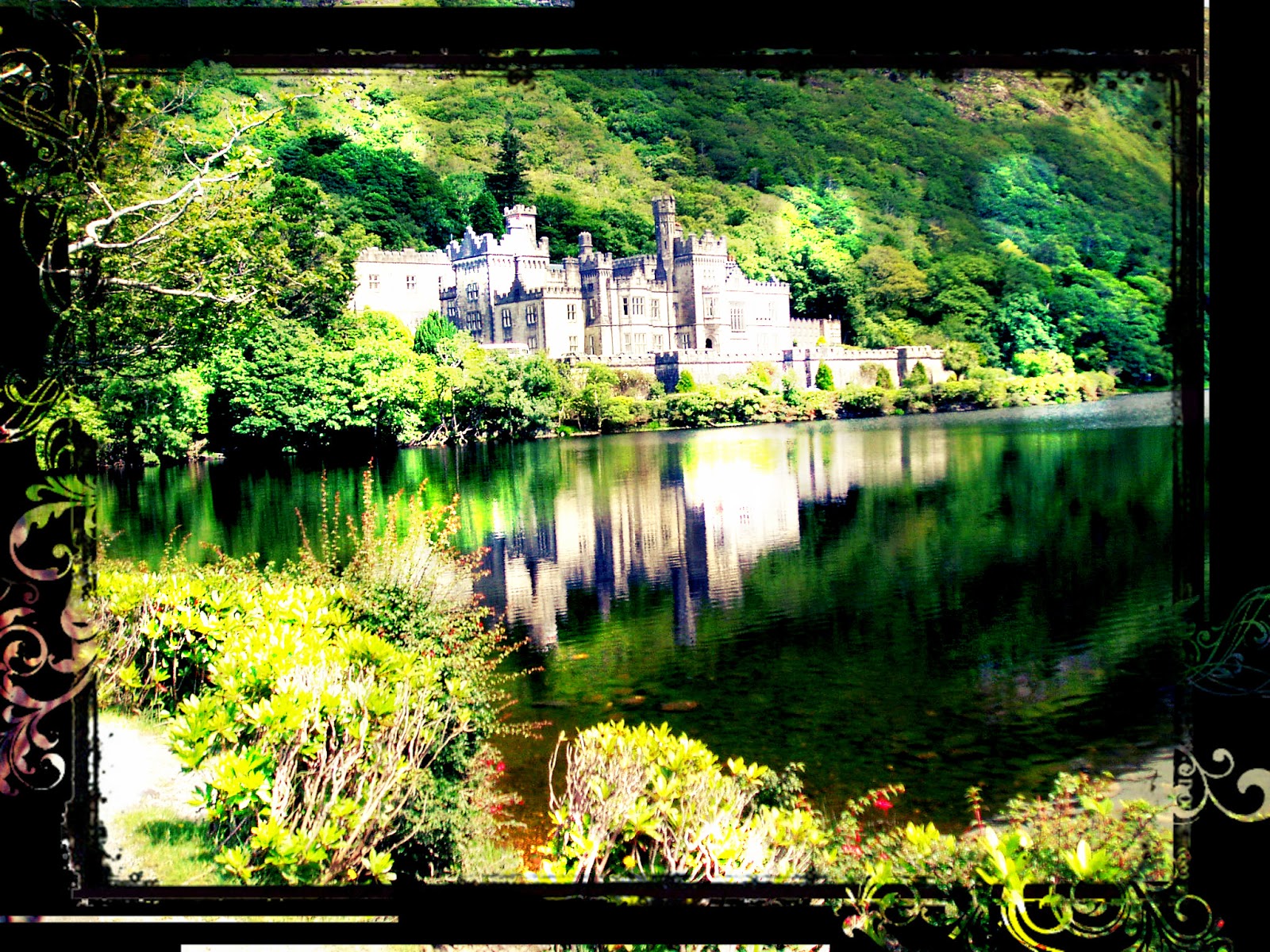 This is a stunning, elegant residential building from 1800's, which has then been transformed into a convent in 1920's and that nowadays hosts a school for rich young ladies. 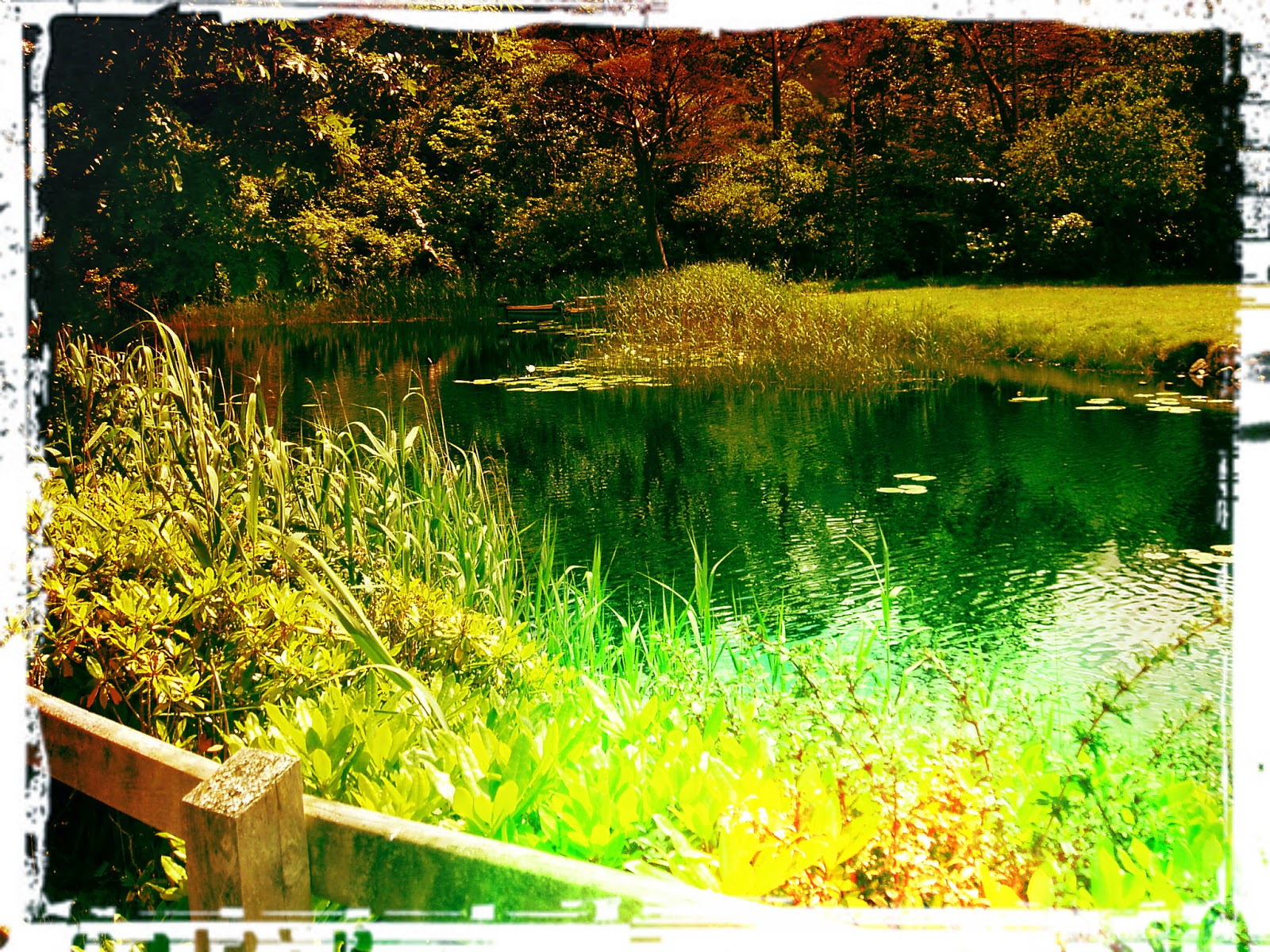 But the park and the view with which it is surrounded is even more stunning: I've never seen a lake so blue and transparent, really, and the woodlands around are enchanting. 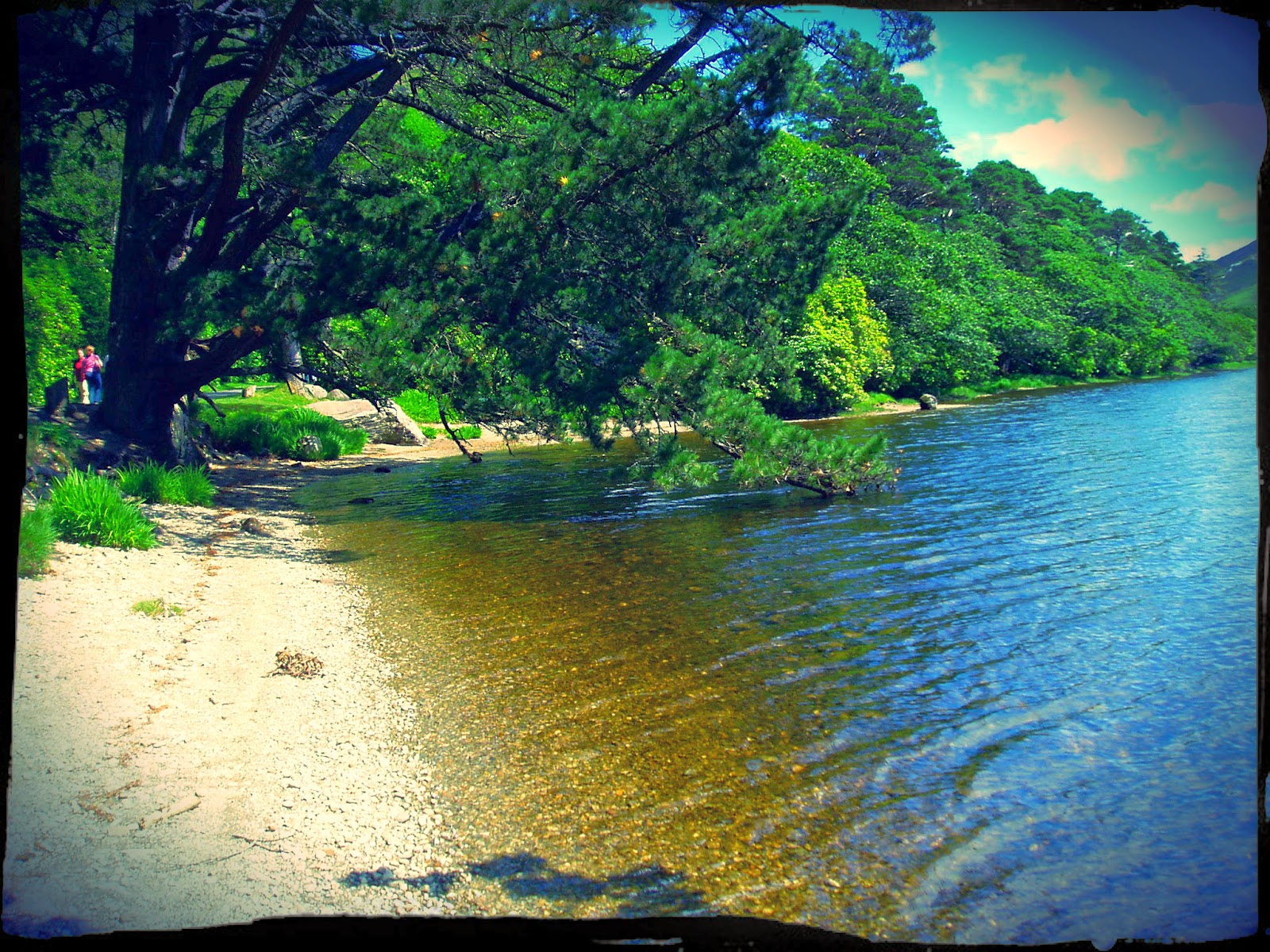 [*] Kilkenny
One cosy city with a long history behind.
There is a castle to see and many other interesting buildings, including the authentical house of a woman who had been condemned as a witch in 1300's and some ruins of  convents. 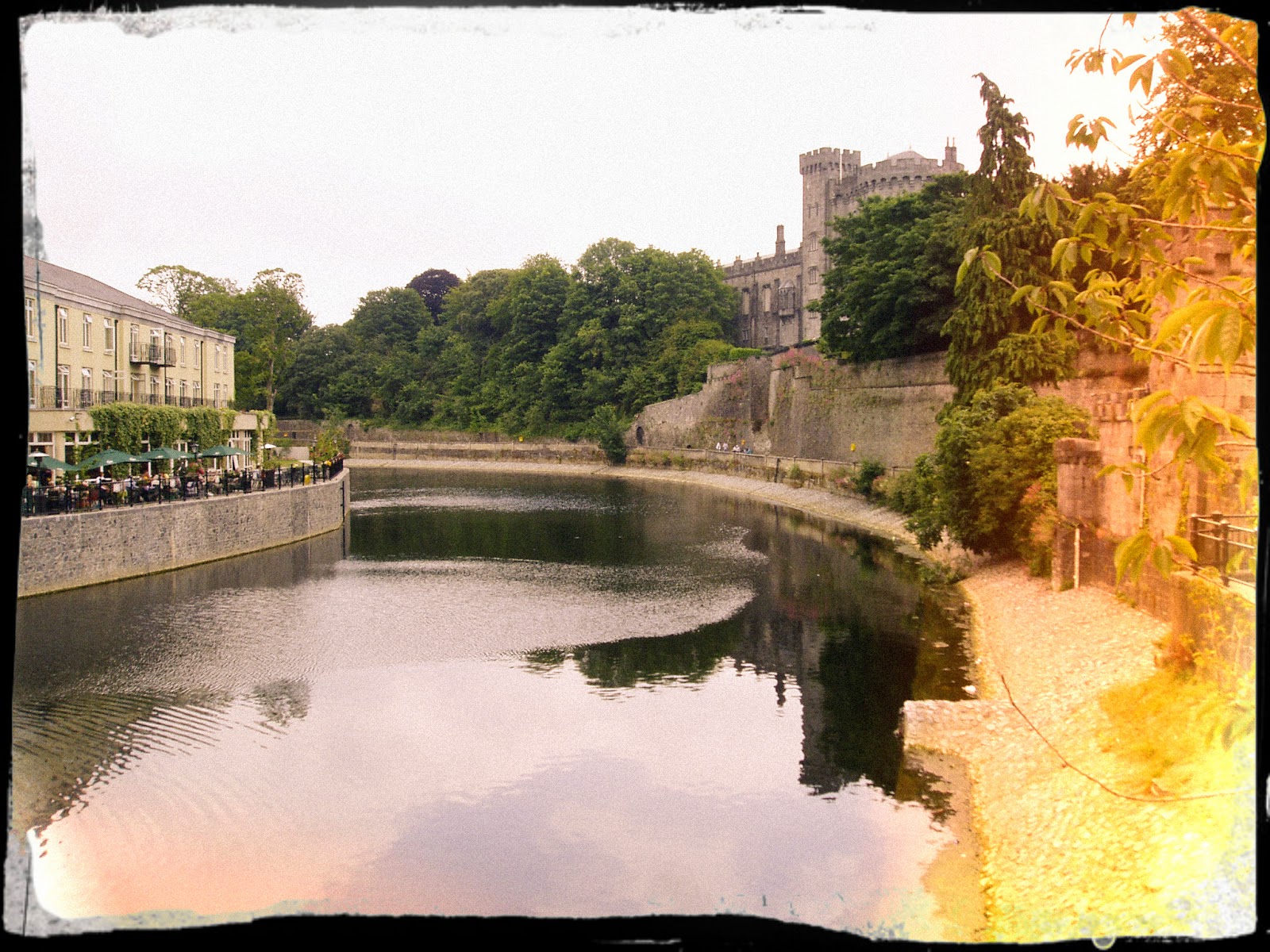 Oh, and did you know that a tenacious fighter is actually called a Kilkenny cat??
There is a limerick about these two cats from Kilkenny fighting each other to death and eating up each other so that only the tails were left - now this is quite gorey and also technically impossible, but if we take it as a metaphor it can be flattering! 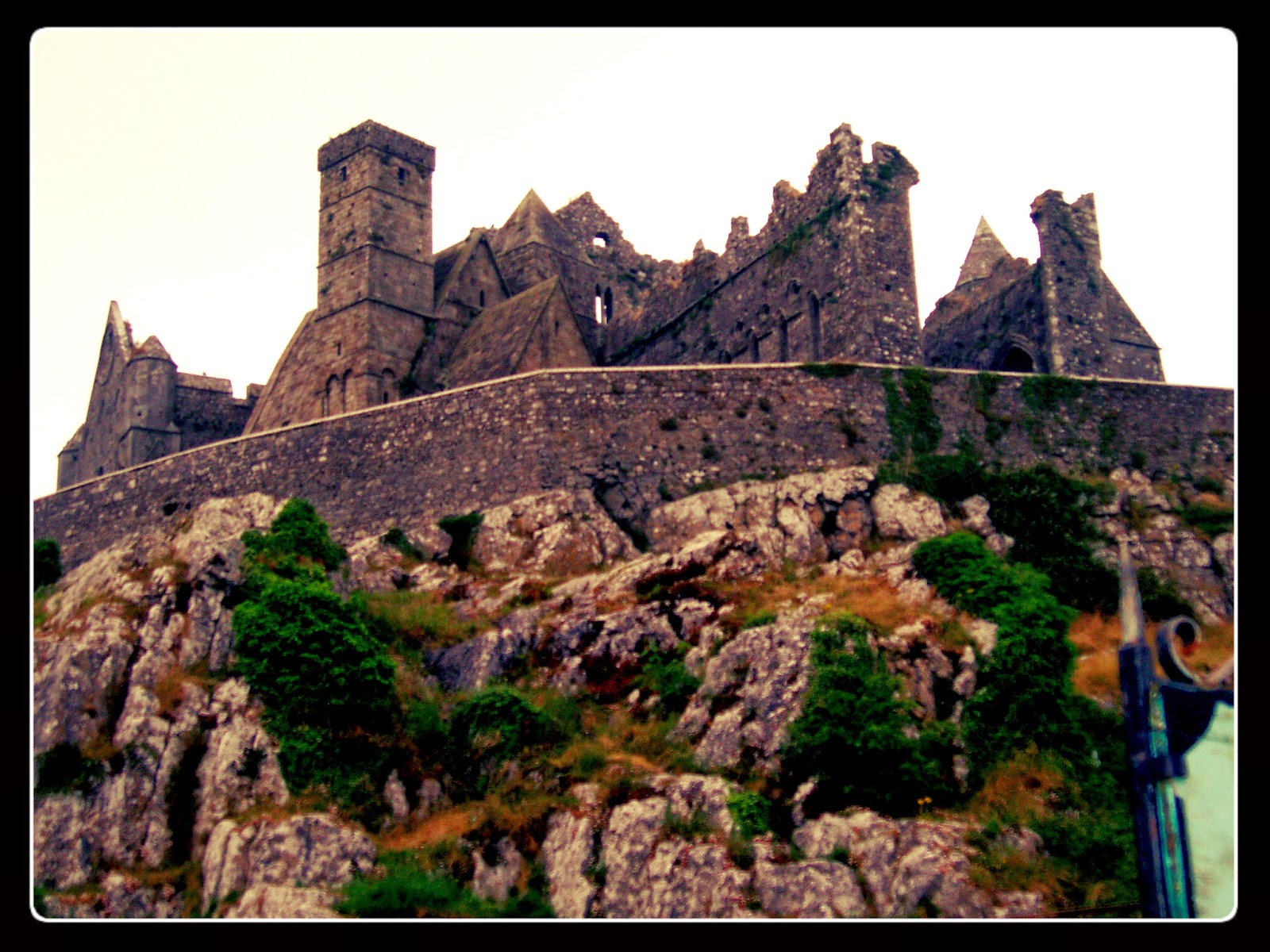 This ancient little town derives all its popularity from the majestic St Patrick's Rock that dominates it from a rocky spur, very well visible from every and each corner of the town. 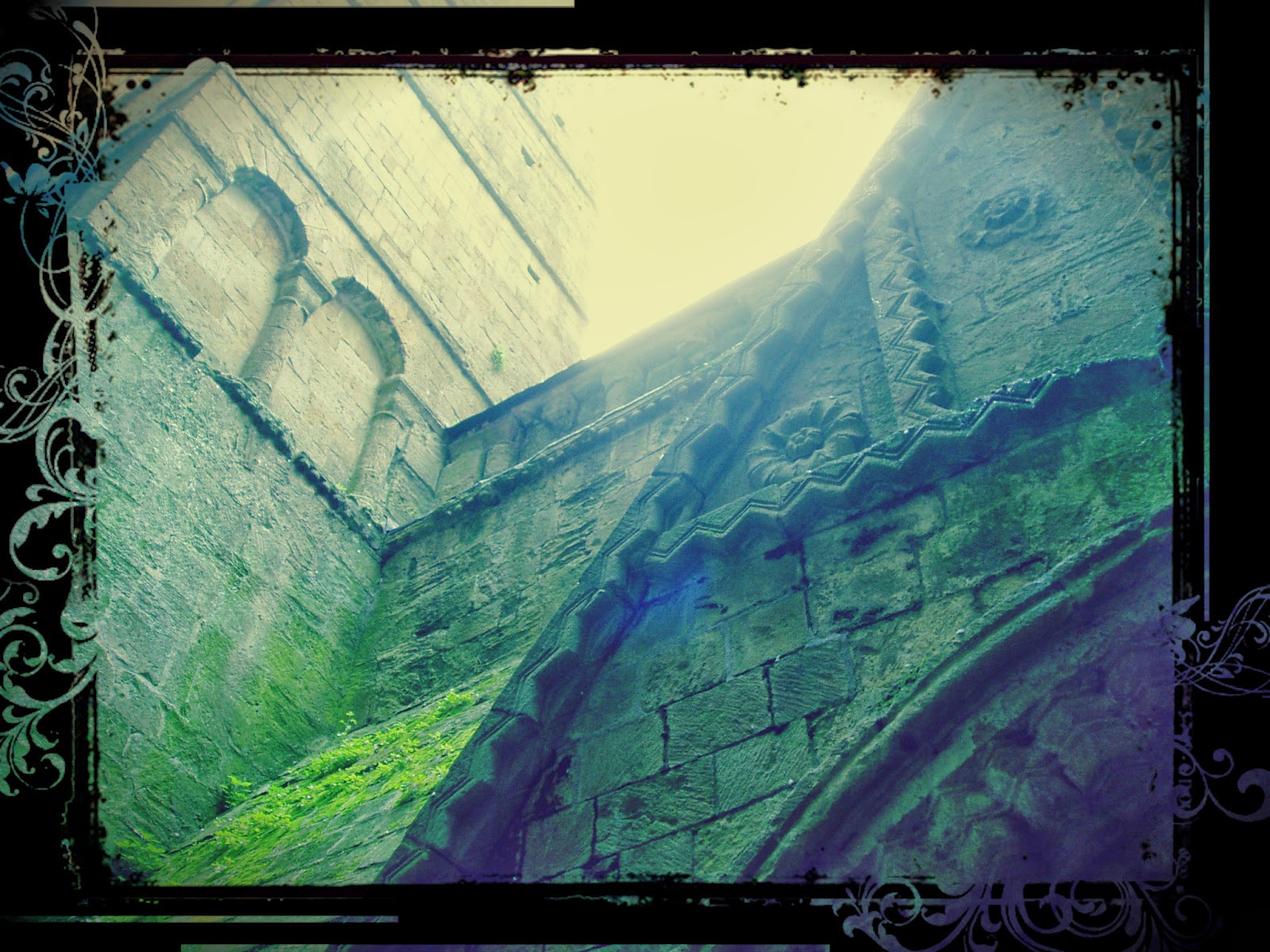 It used to be the seat of the kings of Munster until it had been donated to the Church, and therefore it represents an unique collection of Celtic medieval architecture, both sacred and secular. 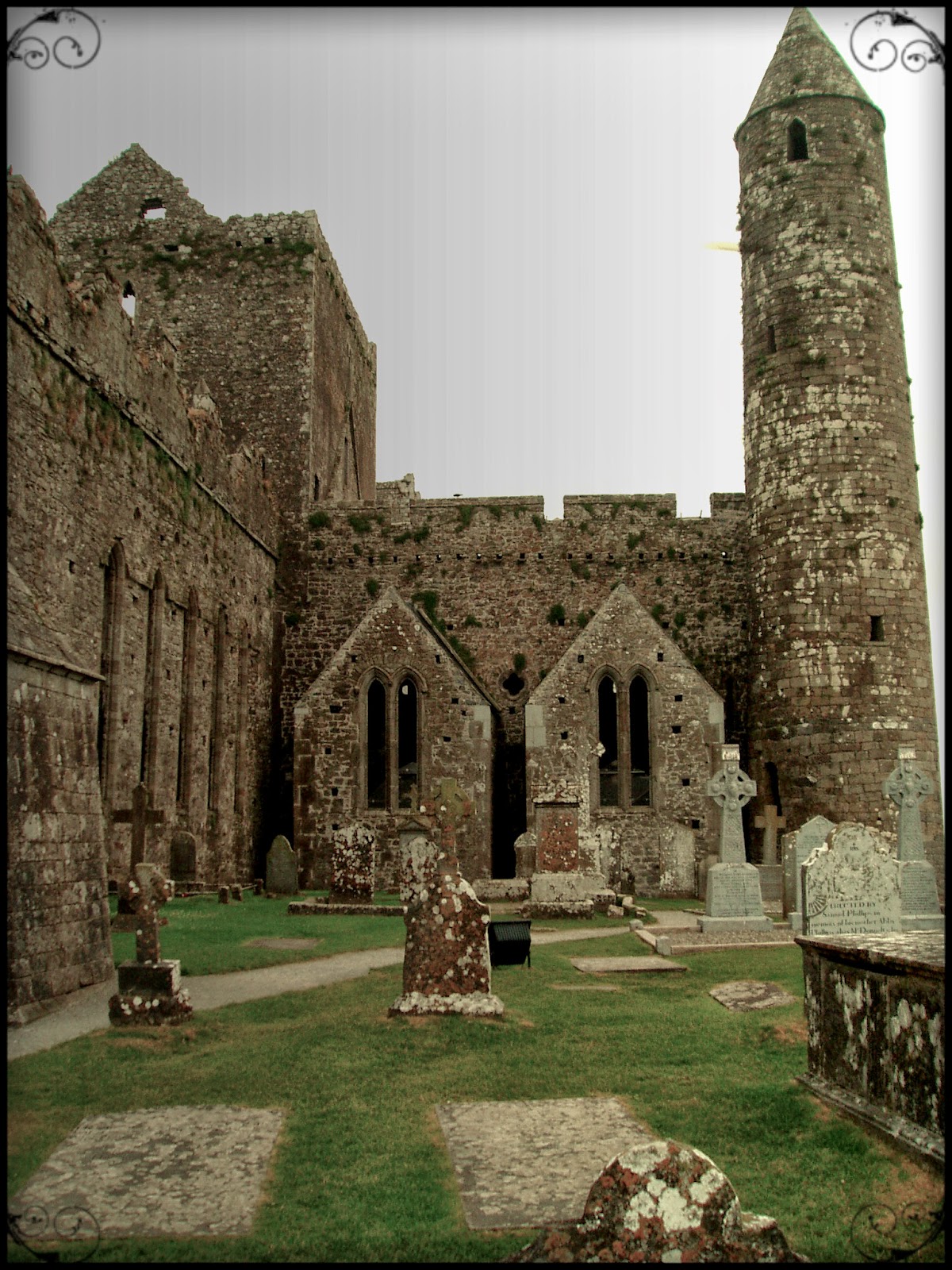 Oh, and you know this already: ruins fascinate me so much, exp. if they are from Middle Ages AND from Ireland!! 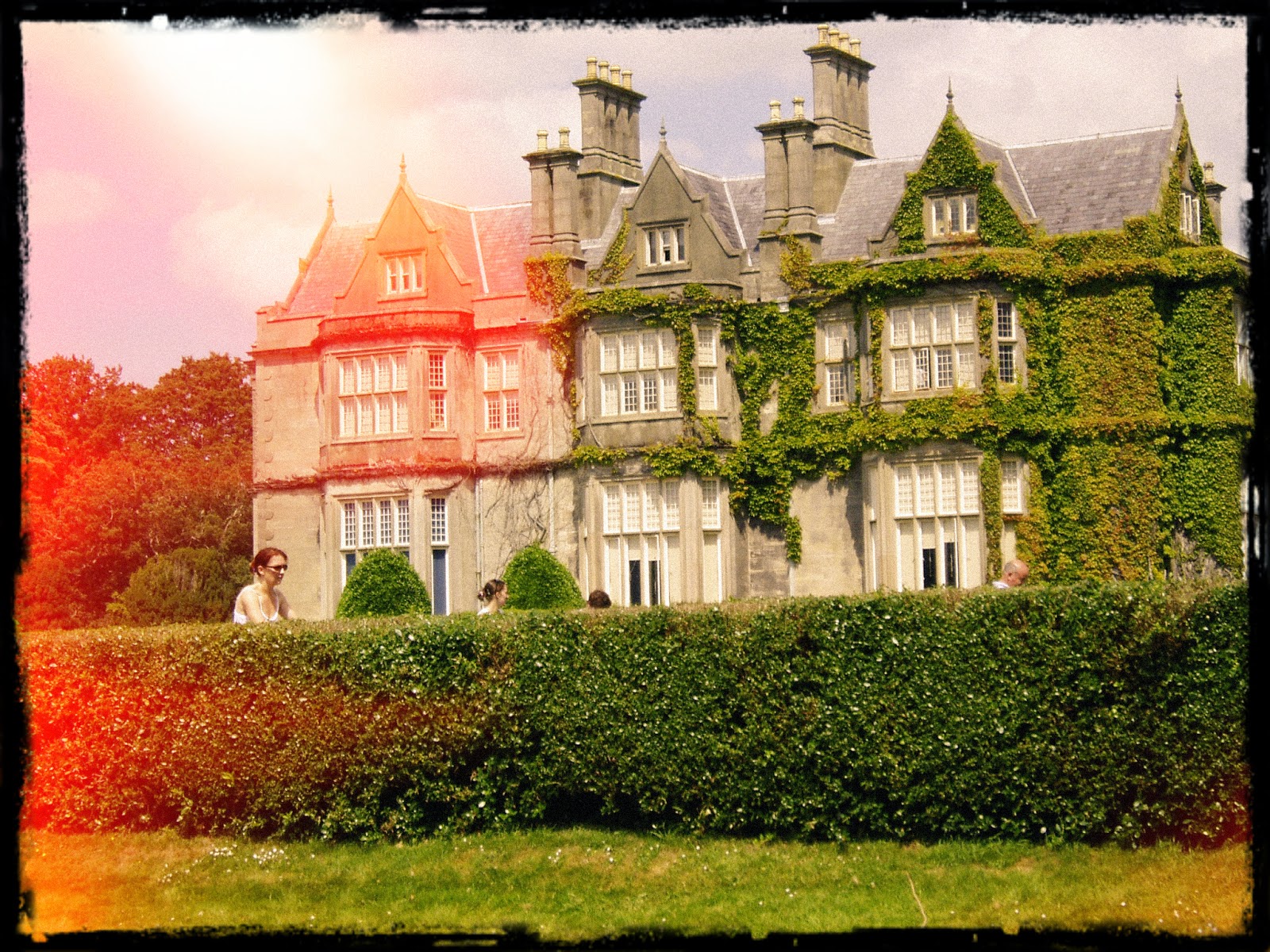 It's a pretty Tudor-style building that dates back to the middle of 1800's and moreover it is surrounded by 11.000 acres of green, which had become the first Irish National Park. 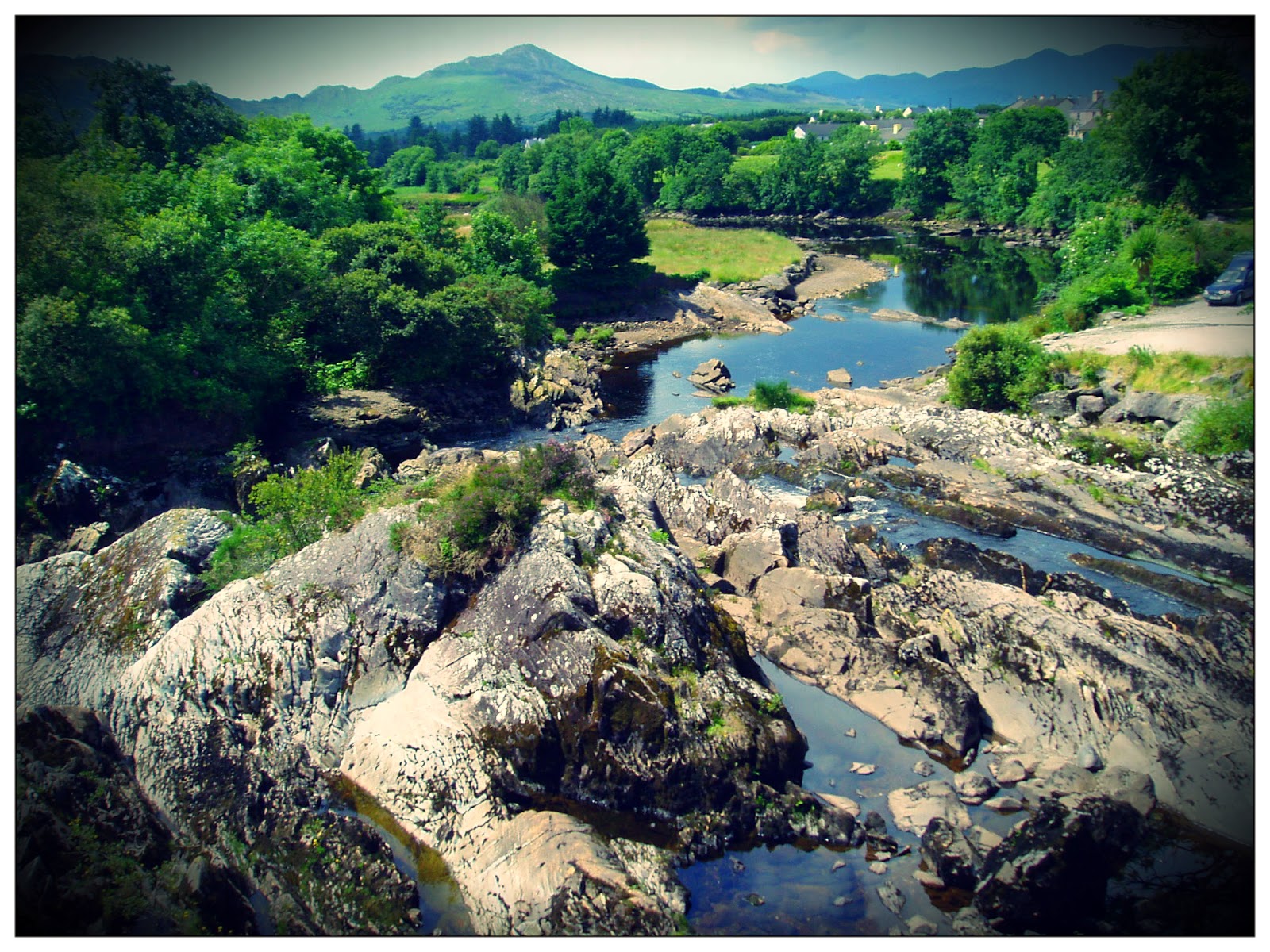 The park has then been enlarged and nowadays it includes lakes, woodlands and mountain peaks. Oh, and some boglands too! 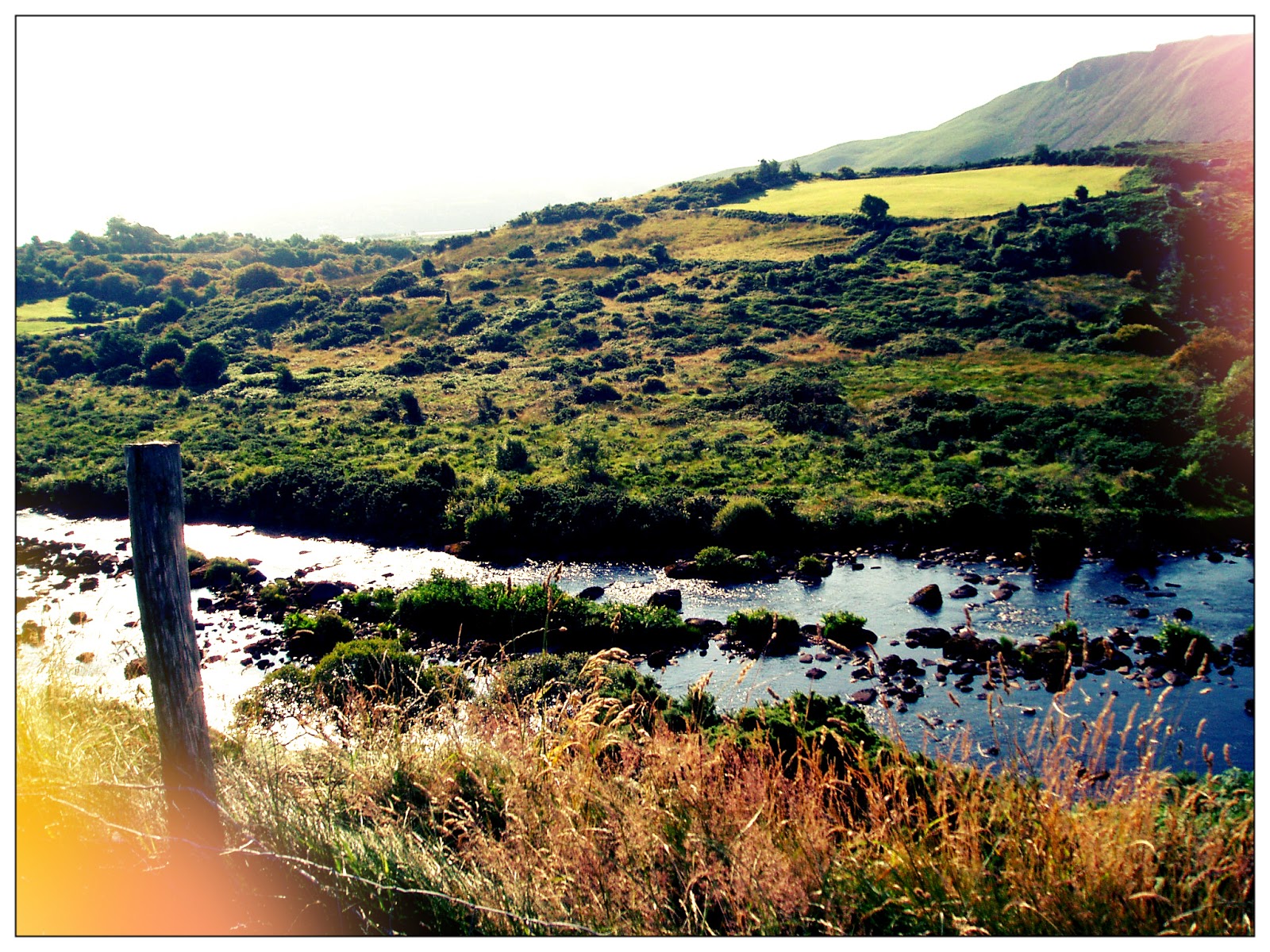 It has provided me a beautiful walk, until it had started raining... but alas, then there was the Muckcross cafeteria!
Pubblicato da Serena Chiarle a 20:26