Alnwick Castle, or how the Duke of Northumberland is very skilled in tourism marketing

I must confess, I didn't even know that Alnwick Castle existed.
It's been Ginger Cat who, when we were organizing our trip in North-East England this year, has discovered that not only it's been the castle that has been used for the external shootings of Hogwarts, but that, among the many attractions that it offers to its visitors, there are also broomstick flying lessons, just like you do during the first year of the Magic & Wizardy School.
Broomstick flying lessons?? Shoot me.


Since the nerd inside of me doesn't do the slighter effort not to show up (and actually I'm not even sure that I do have a not-nerd part, to be honest), we have immediately put it in our itinerary.


When we've arrived in Alnwick, the bus lets you hop off just straight before the bridge.


We greet and thank the driver - because in England you greet and thank the public transport drivers when you get off: that's a small detail that to me makes a huge difference about how good manners are culturally considered in this country, comparing to the very most of the western world... 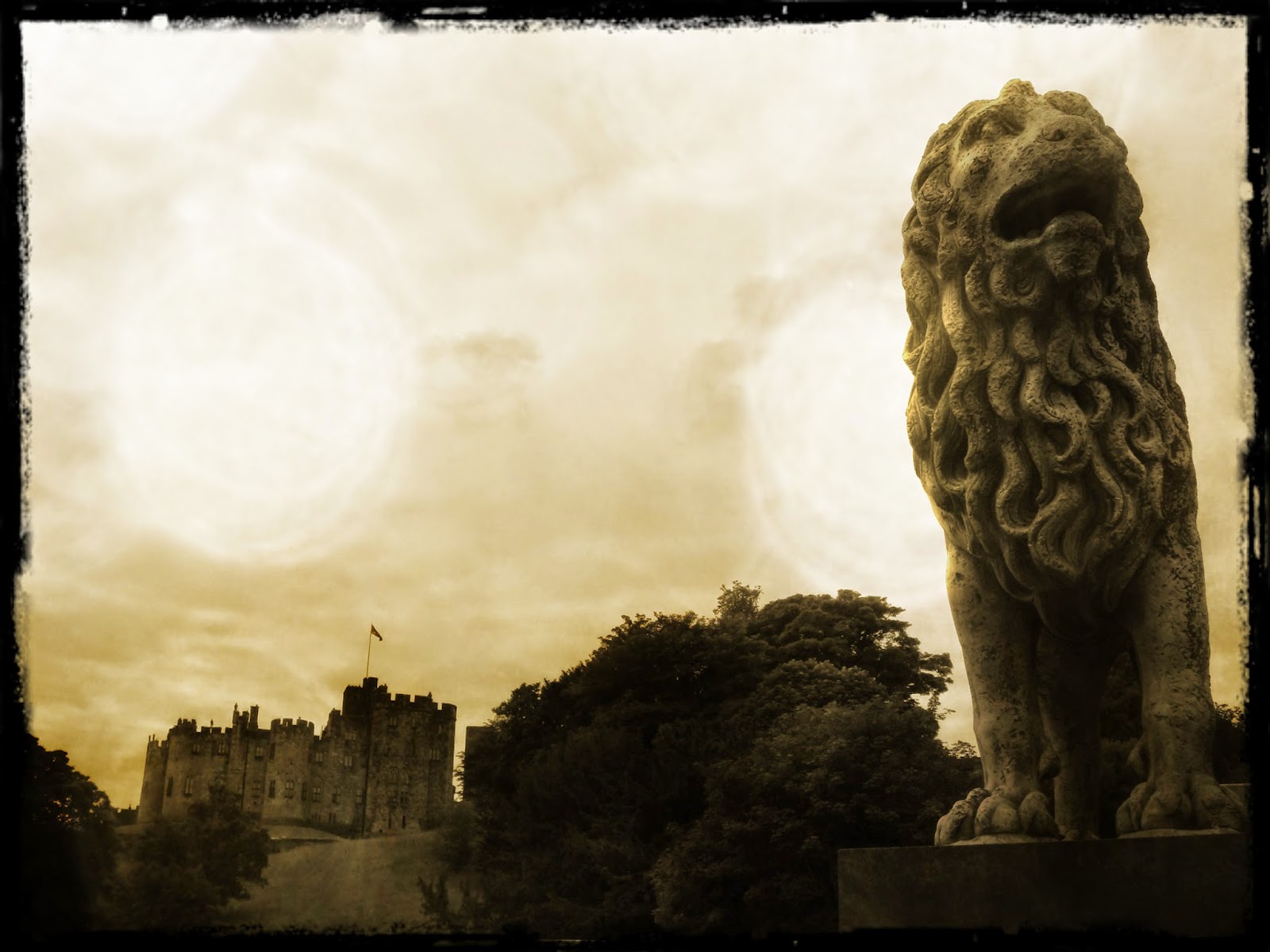 And there it is, in front of us: tall and bold, pretty strutting over the river, with the stone lions on the bridge framing it, announcing it to the visitors like pageboys would do, on the asfalt's red carpet of the bridge.

Its majesty makes me enthusiast, and the curiosity about the broomstick flight makes me bouncing: how might this thing work? Free-climbing harnesses and brooms suspended in the air like Tibetan bridges? Or maybe they would recurr to technology and the flying experience will be just virtual, but, thanks to robotics and with the help of 3D, exciting nonetheless?
Anyway I already taste it, as joyful as a lepreuchan at the idea of being able to stop being a Muggle for an half hour or so. 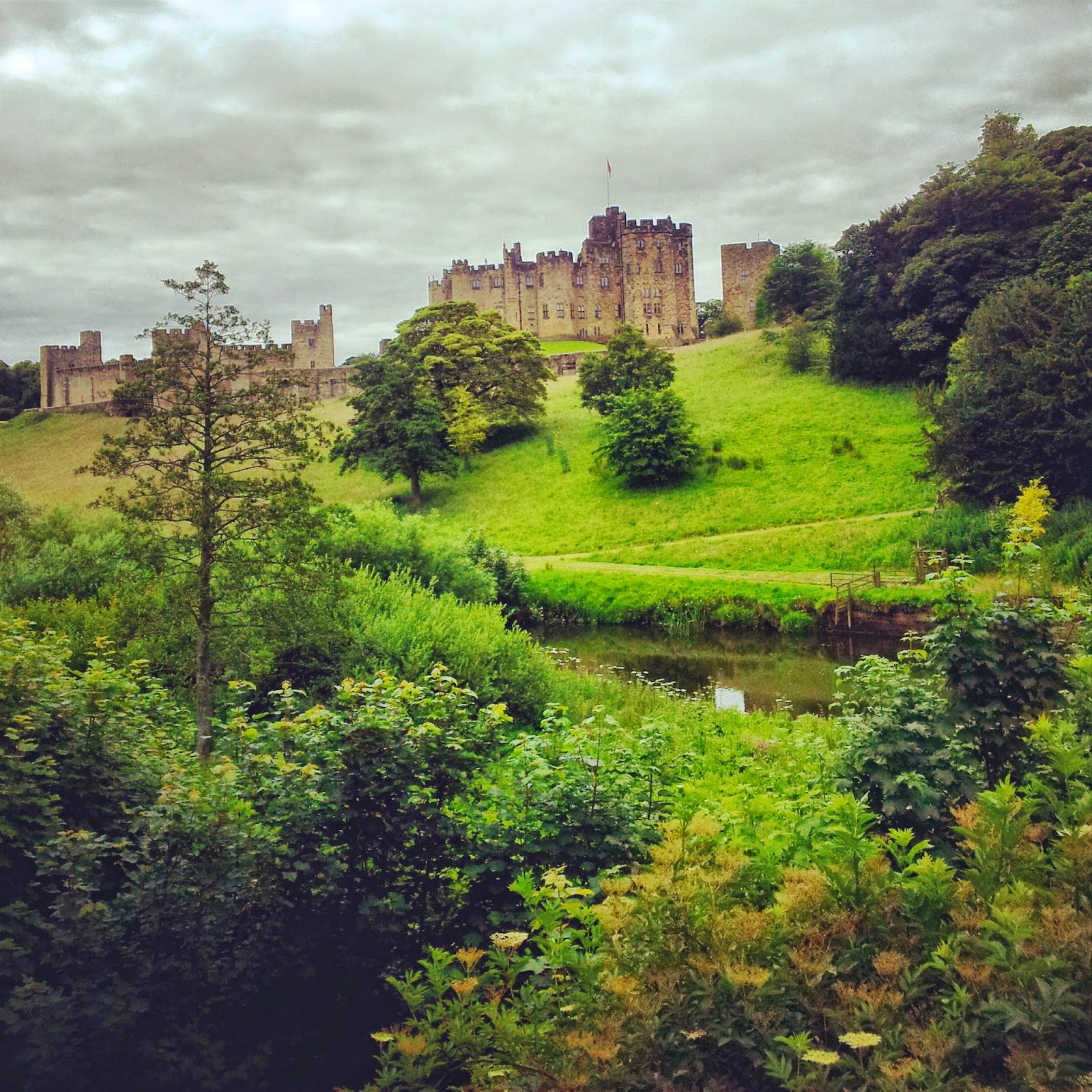 We arrive at the entrance and for a minute our enthusiasm freezes out a bit: the entrance ticket, valid both for the castle and its luxurious gardens, costs something like 27 £.
The high amount is justified by the fact that it's a ticket which lasts for a whole year: the castle hosts quite many events suitable for the whole family which are different every day, so for someone who lives in the Northumberland it may be actually a convenient formula to get guaranteed 12 months of creative and vintage entertainment; but, even if quite a big piece of our hearts will always be here around, our bodies, in spite of themselves, usually stay many thousands km away from Alnwick, so we just cannot get the convenience of this kind of not optional annual pass.
And no, there are no daily options.
The only thing you can do is choosing to visit either just the castle or just the gardens, paying respectively 14.50 or 13 £.
Which means that the "full" ticket offers a saving of just half pound comparing to the separate purchasing.
Anyway at the cashiers the queue is quite long.


The Duke of Northumberland must a marketing genius. 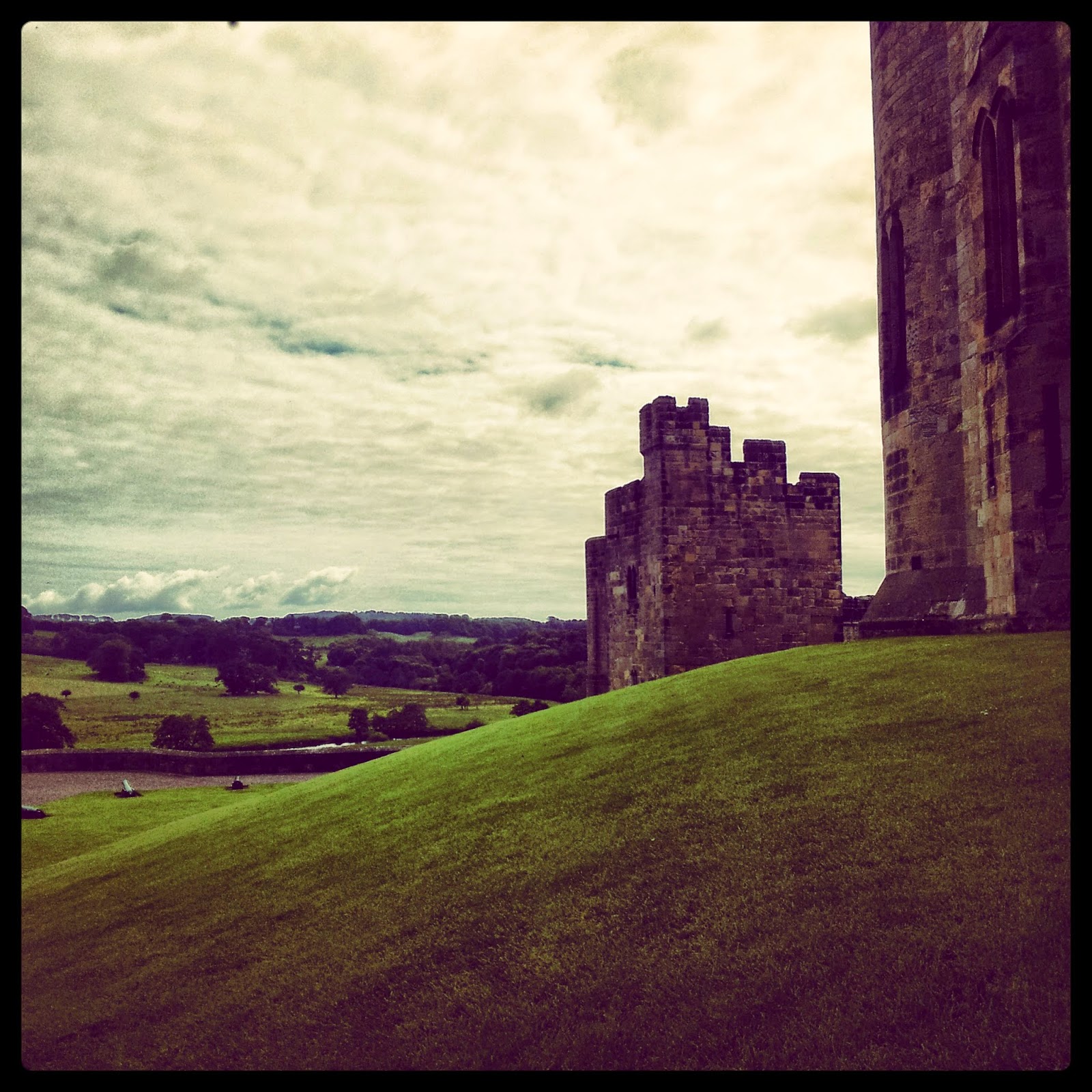 We choose the option castle only: I just cannot go away from here without having seen Hogwarts live and without having tried to ride a broomstick - am I or am I not a black cat??


The castle's interiors are as majestic and grand as it was appearing from the distance crossing the river: among the mighty towers and the very green ramparts, if you lift your eyes up you will see statues of men in arms among the above battlements (who knows if maybe they are real soldiers transformed into stone by some unsuccessful spell, thrown by some clumsy beginner wizard?) - and yes, I think I can recognize Hogwarts. 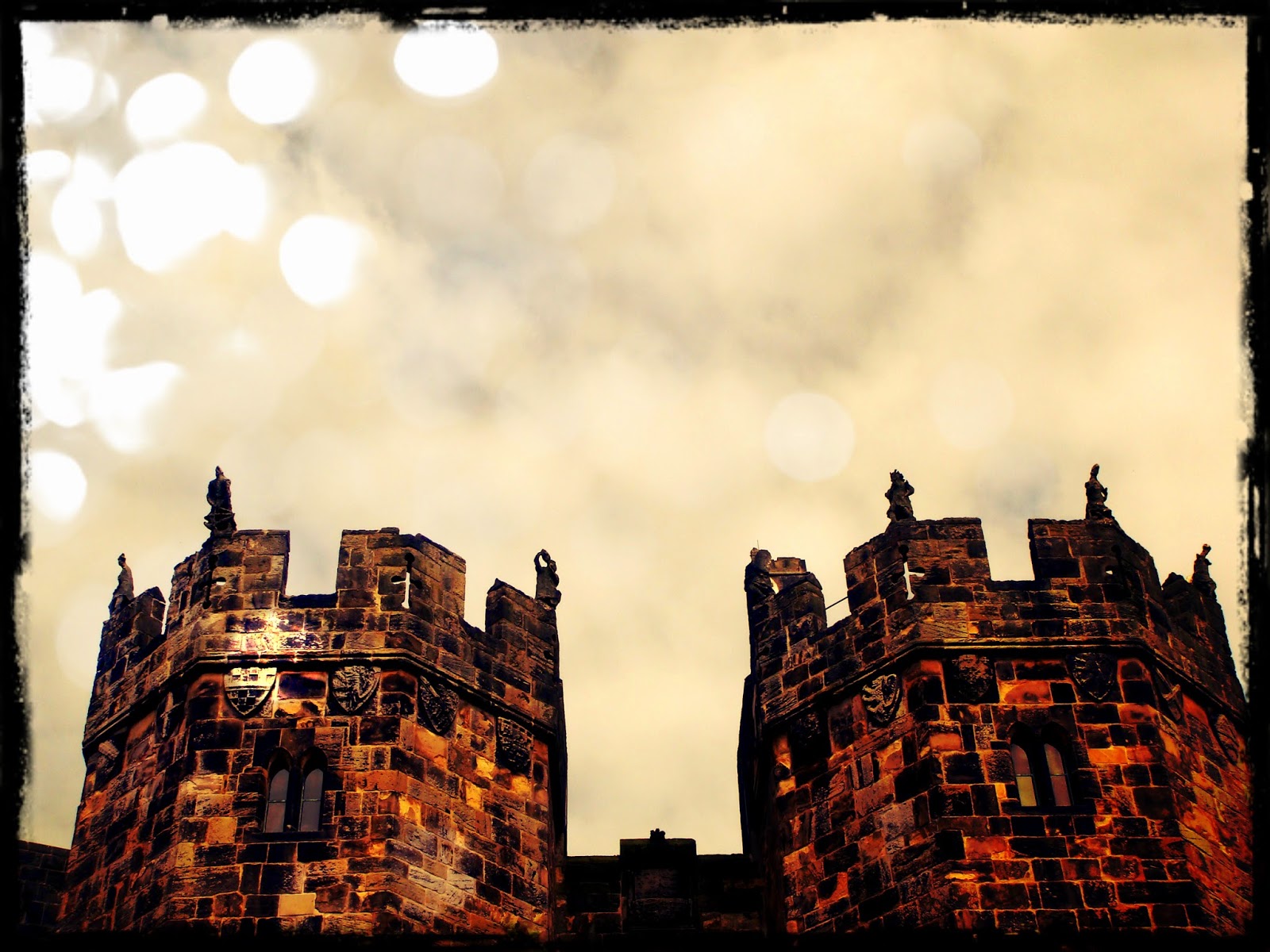 I hang around doorways and moats hoping to spot some young student with the black cloak and the Gryffindor coat of arms, or, even better, some flying broom, but I cannot see anything, and Ginger Cat at some point calls me back because we need to start our visit to the castle's State Rooms.

The castle is still inhabited, so you can visit just a small part of the apartments; but also what we see gives the impression to enter inside a living room of which the lord of the house has just opened the door.
Sure, it's a kind of living room which is like a hundred times bigger than my own, and maybe even more than a hundred times more rich (not my fault if Ikea doesn't sell silver candelabrum and Persian carpets); but the atmospheare is cosy and the impression is about entering inside a place that is "alive", and not in one which hadn't heard since 200 years the last footsteps of its inhabitants along its halls.
You enter in a place which still has someone who calls it home.
Pictures of people living there nowadays are displayed on ebony tables and on fireplaces just below their ancestors' portraits painted by Titian and Van Dyck.

And there he is, the marketing genius.
Ralph Percy, 12th Duke of Northumberland.
In the photo he looks a bit like John Elkann and a bit like Owen Wilson, but its attitude is more like Steve Jobs's.
And, maybe, it wouldn't be bad to have him as the Fiat's CEO - who knows.

In one of the halls there is displayed the wedding gown of his daughter Melissa, recently married with an event that for Alnwick has been second only to the Royal Wedding.
As pageboys she had girls and boys dressed up like flowers fairies and woods elves.
I find this idea really cute and I would like to copy, if only this wouldn't mean having to get married.
Oh, and perhaps I should also have a castle.

Some more rooms away there is displayed the big amount of unusual objects collected by Elizabeth, first Duchess of Northumberland, in the 18th century.
Elizabeth was curious, cultured and modern: she love travelling, and she was writing, writing and writing.
If she had to be born nowadays, she would have become a travel blogger as well, perhaps - and surely she would have had quite many interesting things to tell. Maybe we could have met in some bloggers event!
Elizabeth enjoyed to collect any thing that would somehow tickle her curiosity, from Chinese pottery to historical finds: she had even been able to discover a pair of gloves that used to belong to Elizabeth I Queen of England and a nightcap with which used to sleep Oliver Cromwell.

Good, but now I want my flying lesson.
And finally we see it, in one of the courtyards.
There is a guy wearing the black cloack of the Hogwarts teachers and a pointy hat, that hangs around with a small chariot full of sorghum brooms.
Every now and then some children stop him, he handles them the brooms, makes them ride them, gives them some explanations that from a distance look to me like the ones flying attentands do before the plane takes off, children jump with the broom between their legs, they laugh happily and then give it back.
That's what the flying lessons consist of.


They are flights of fantasy. 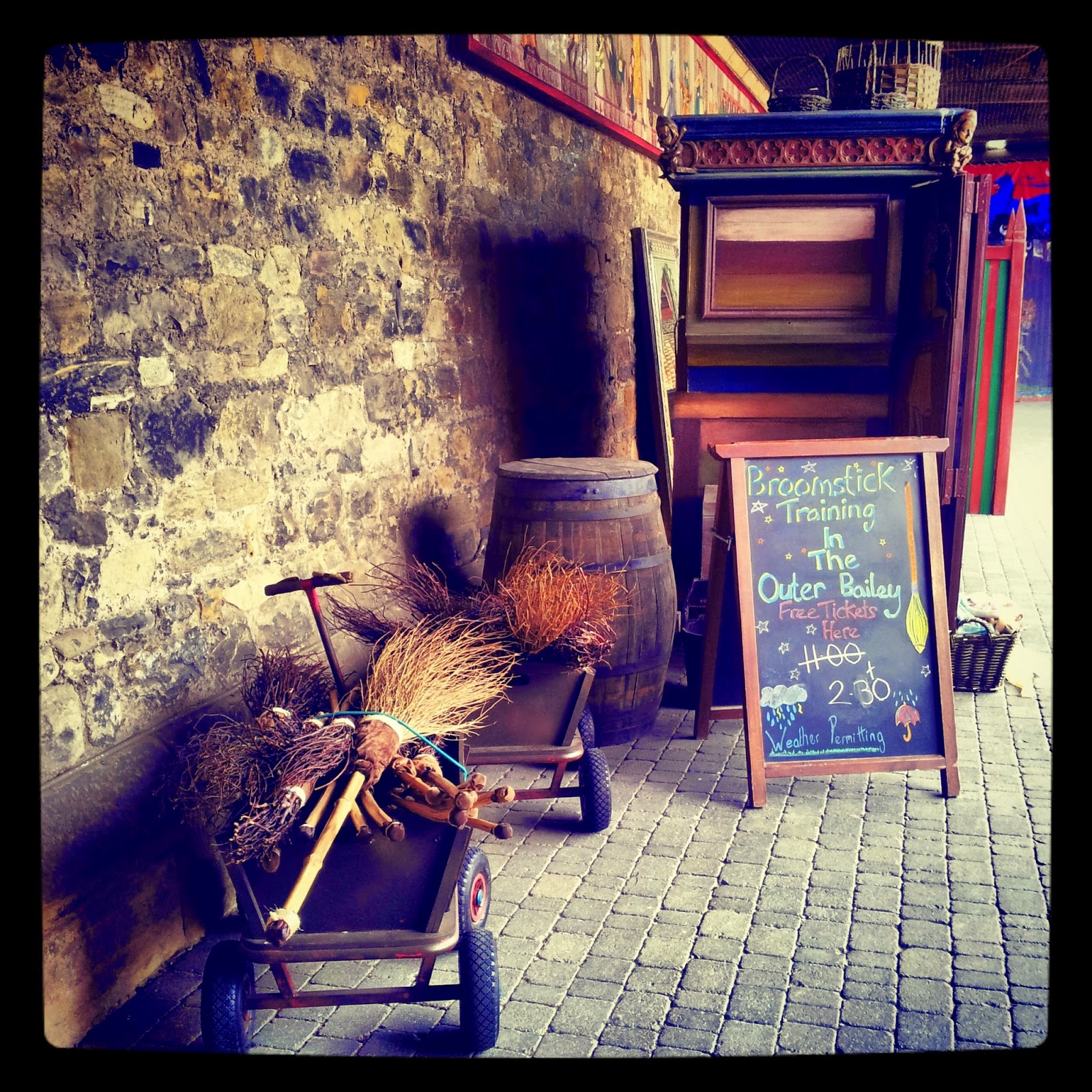 I get to imagine Ralph, our British nobilty's Steve Jobs, opening his arms and smiling saying "That's marketing, baby!".
After all, kids were having fun and I've got so curious about it that I wanted to visit the castle even if the ticket was more expensive than the average.
So - it's worked.

The grass courtyards of the castle host everyday a different event, suitable for all the family: one day there are the Harry Potter's charachters, another day a medieval knights tournament, or an archery trial, a falconry demonstration, an alchemist's show and so on.
Ginger & me unfortunately chose the only day when there was nothing going on.


No worries, after all our ticket lasts a whole year long, and you never know - maybe we might have a chance to go back. 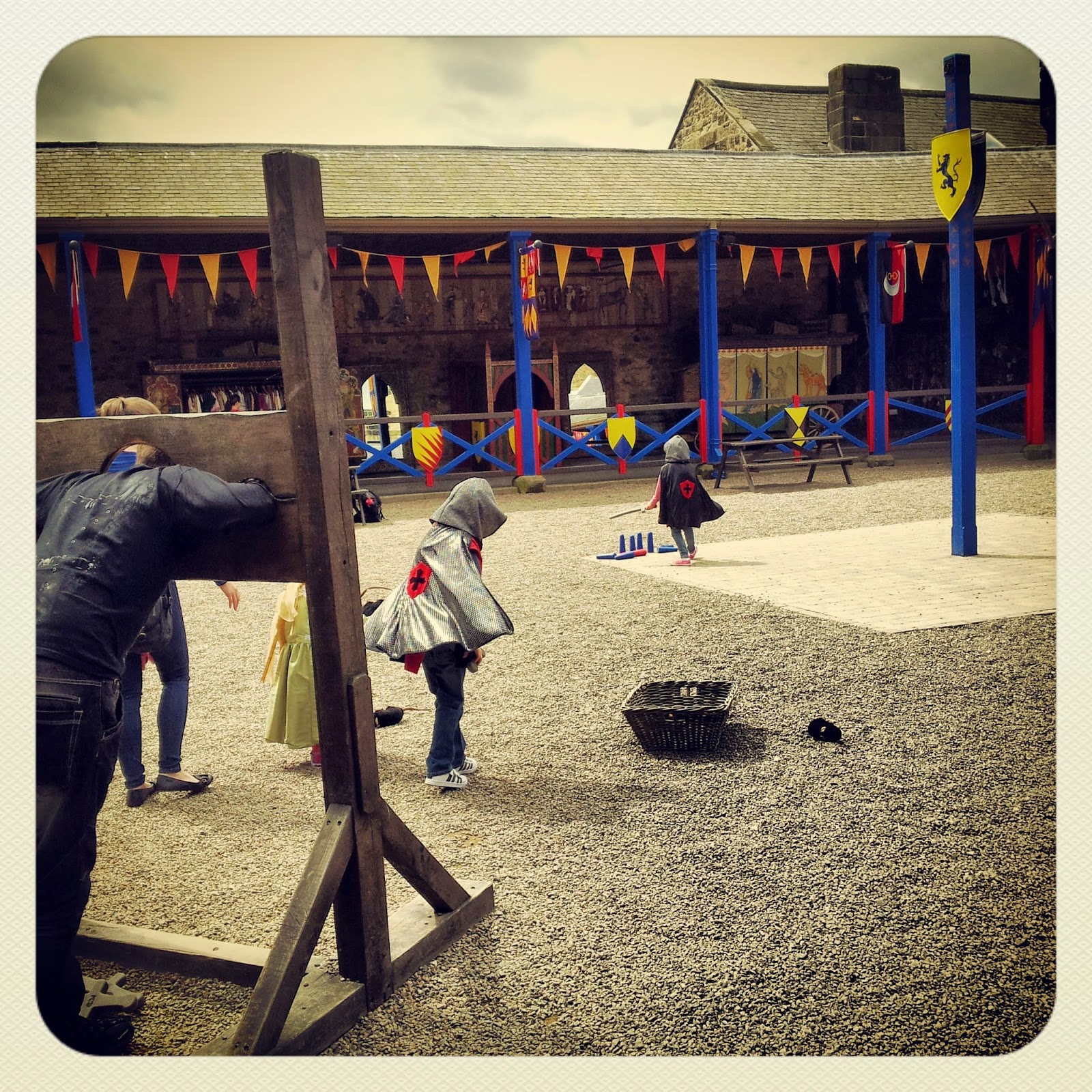 In the meantime we get content at hanging around the gravel courtyard where usually the knights tournaments take place and that, when nothing is going on, is being used as a playground for kids.
Here children can dress up as warriors or princesses, running after each other with foam swords, put their parents on pillory and throwing plush rats at them. 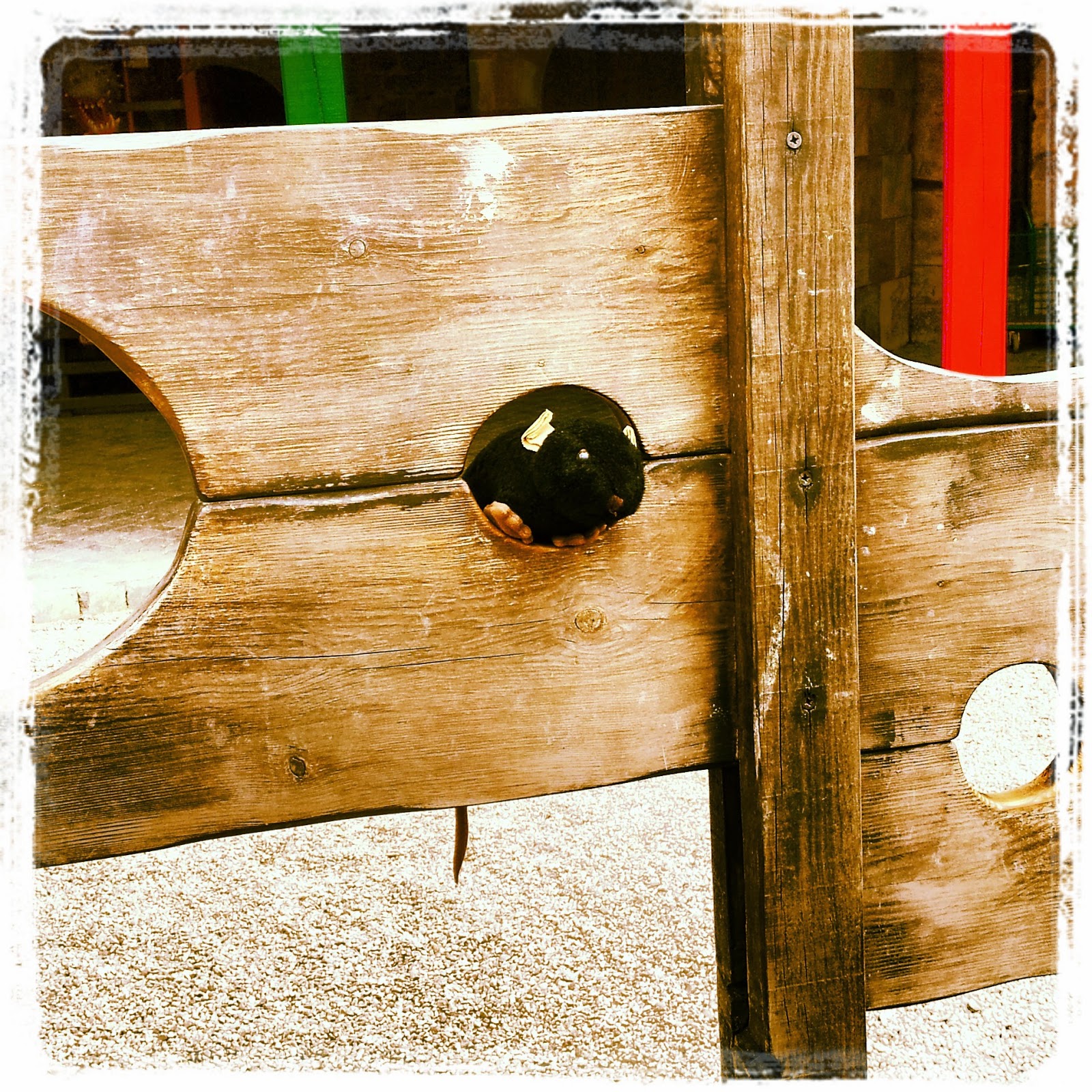 The knight's disguise is the most beloved by kids, even by the girls.
And the only little lady who has preferred the pink laces of the princess was anyway holding a sword as well. New generation is no longer for damsels in distress.
Guys, you'll have to acknowledge this.

The bravest among the little knights may try the Dragon Quest, a sort of horror tunnel where at each station you have to solve a small riddle, like on crosswords magazines, but with the added psychological pressure of being surrounded by monsters hanging from the ceiling and scary screams coming from undefined places.
In theory adults should go inside only as escorts, but you know, what matters is feeling young inside. 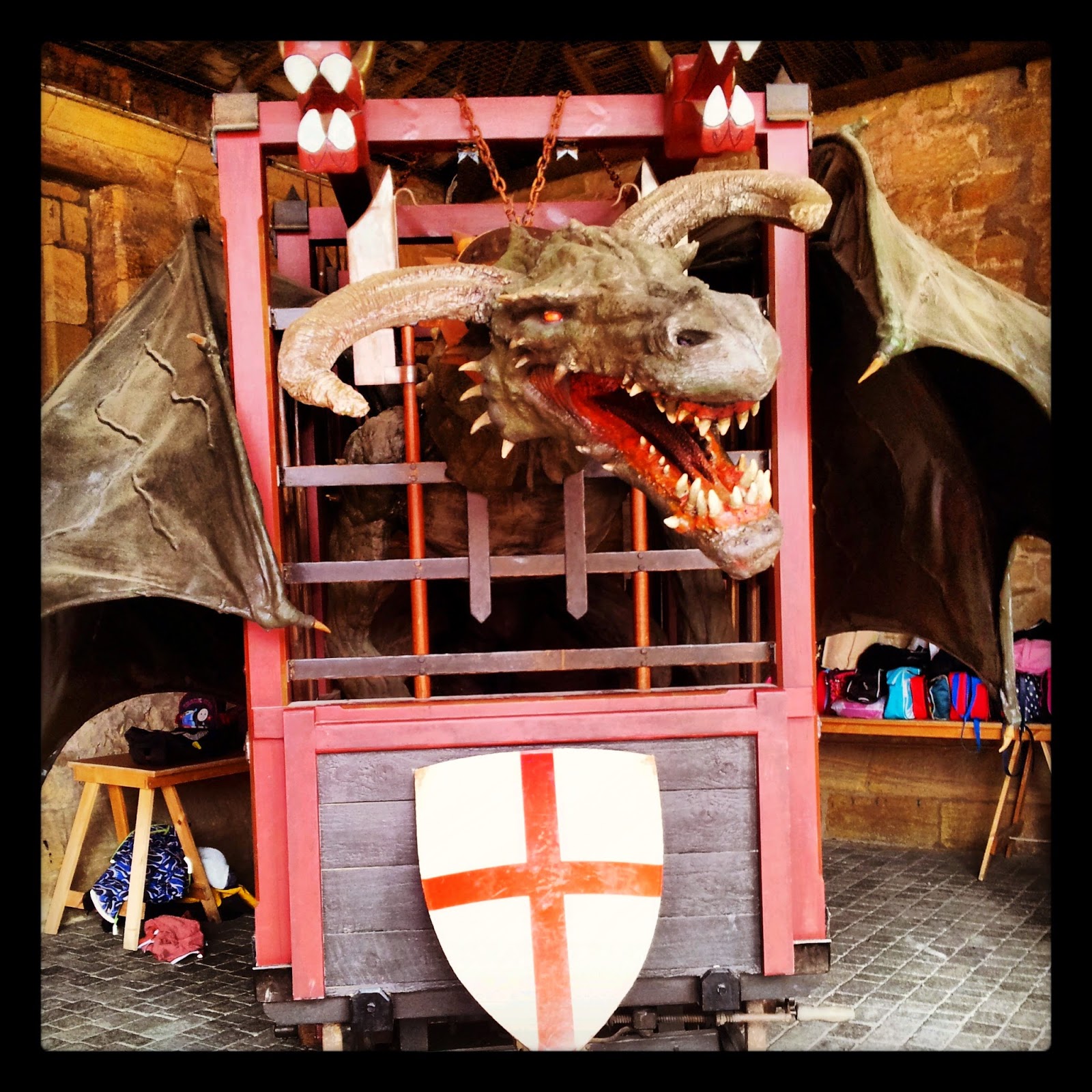 But let's stop joking now, I sincerely think that our Duke is actually really gifted with marketing.
He's been able to monetize and exploit the big historical and artistical resource he's found in heritance from his family.
He has made a castle become not only a huge and serious silent museum, but also a place of meetings and of educational passtime for families.
Children not only play with foam swords and with plush rats, they also learn history while having fun - and when, within a few years, they will have to study the events connected to this castle, to them it will no longer be an aseptic name written on the pages of a notional book, but it will be one of the many funny afternoons of their childhood.

In the gift shop where you pass to get out, the castle's tagline claims that it's "the most beautiful".
Perhaps it's an easily rebuttable statement, but it's also so subjective that it's impossible to deny it as well: there is undoubtedly beauty, among these thick walls so rich in history, and now also rich in magic. And there is also in the children's games, in the fact that, in order to fly on a broomstick, you just need fantasy. A dragon can be defeated with intelligence, solving quizzes and riddles, and also princesses, if they want, can use swords.
I think that Lady Elizabeth, with her mind so open and modern, would have approved the job made by her grandnephew.