I'm no beach animal, you know.
Somebody gets surprised by it and finds it strange, probably because he's born and grown up in a beach animals tribe, and has always met just beach animals - until he hasn't met me, a rare beast who gets bored under the beach umbrella, who seeks for the misty and gloomy lands of England exactly like a mosquito seeks for the lights, buzzing against it, attracted like a magnet, like a primordial desire.
But it's not always been like that.


I'm the living proof that certain passions, certain inclinations do not develope because they've been instilled during childhood, but because you carry them inside yourself, maybe through some recessive chromosome, which is not known where it might come from and how much road it might have done in order to be able to show up in such a clear and neat way in your genetic heritage - or maybe with something more powerful and mysterious, something that rules the direction where your heart pumps your blood through your veins, something that makes your beatings accelerate when you arrive in a certain place and, even if you've never been there before, it makes you say "Here it is, this is my home".
As a child, I used to be a much more standard animal - or, at least, for what concerned the choice of the holidays destination, I mean (which, anyway, wasn't obviously up to me).
As a child I used to look like a beach animal as well, and I used to apply too the standard mathematical equation of the Italian summer: holidays = seaside. 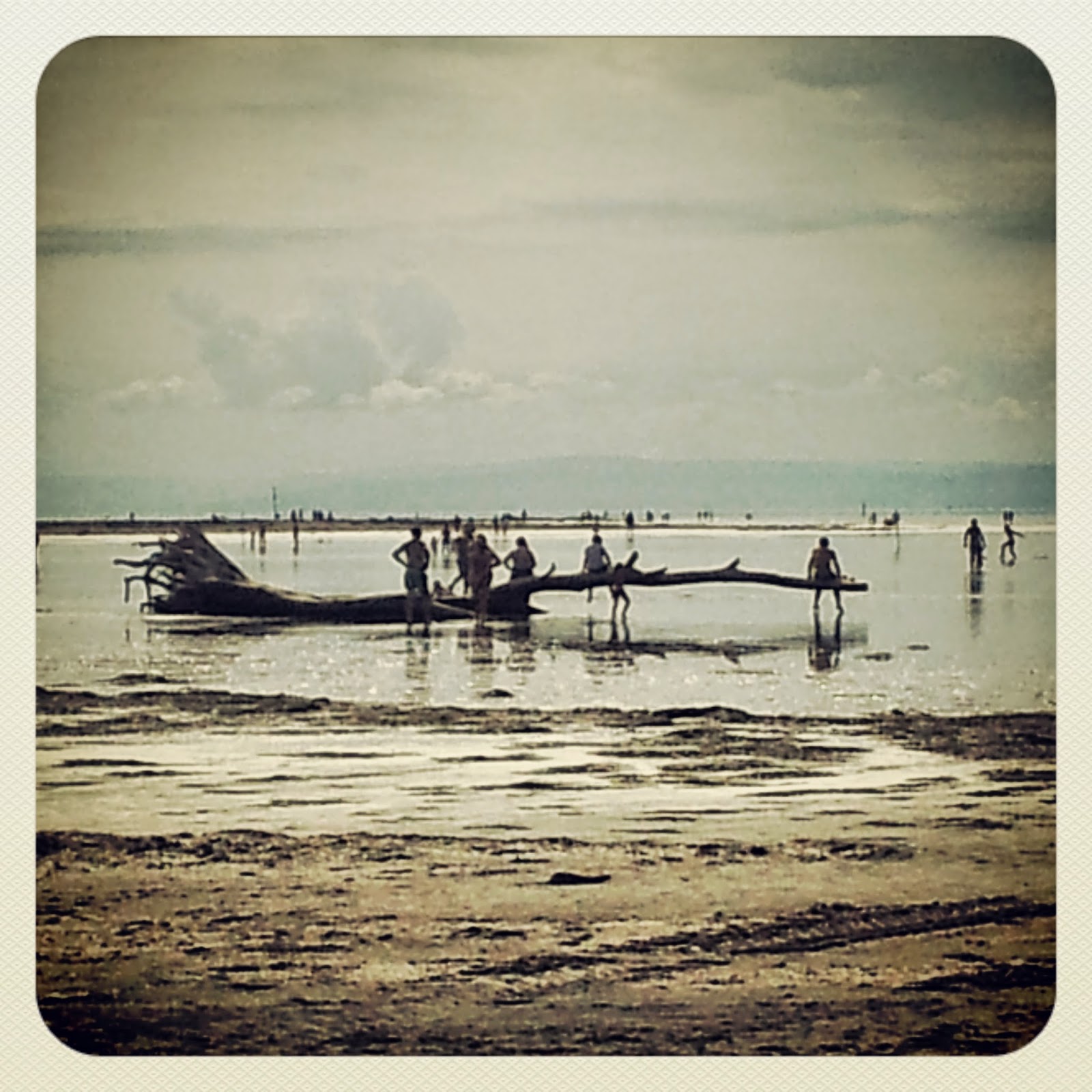 So, when I was telling people that this year I was going to spend a few days at the sea as well, a lot of them have started to stare at me with eyes wide open. Others have thought that I had finally come to my senses, and they almost wanted to celebrate the event.
But nothing like that, really.
The matter is actually way more simple: if I'm more keen on a certain type of vacation, a type that is apparently opposite to this one, it doesn't actually mean that I'm totally immune to the pleasures of sea, sun and beach.
The thing is, since I usually have a quite small amount of days to spend with the vacation mode on, I usually prefer spending them in another kind of place: that's a very personal priority of a not-beach animal.
But this year things have been slightly different.
More days to spend with the vacation mode on, a lot more.
And so... a bit of sea, why not? 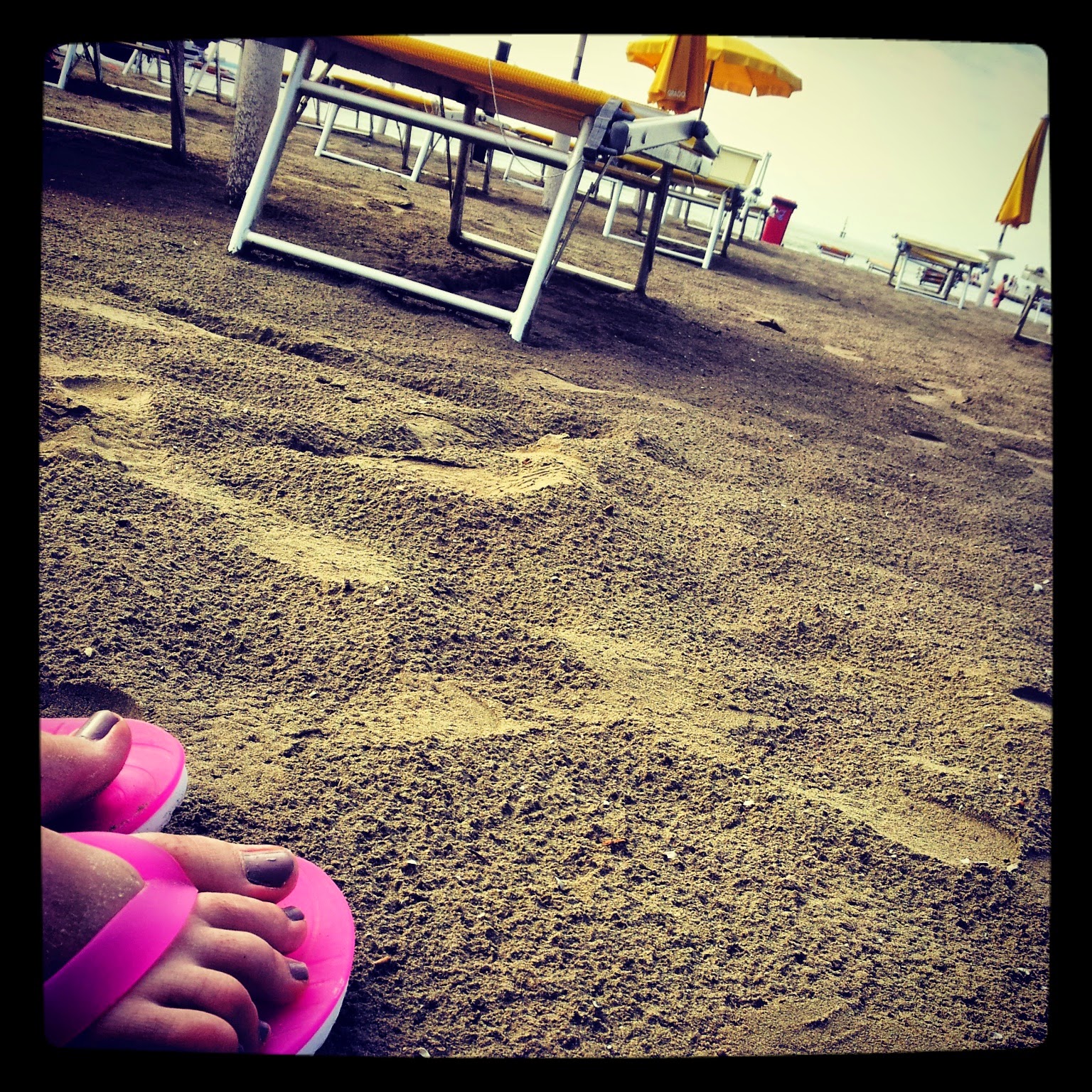 How long has it been since I didn't have a "seaside" holiday?
Ten years?
No, actually that time we had spent reading on the rocks just the time you need to *not* get tanned - and we had spent the rest exploring the uphills of Imperia, the most intimate and less posh soul of San Remo, the alleys and the crafts of Bussana Vecchia.
So I'd say that 15 years have passed since my last "beach & seaside" vacation, according to the official Italian definition of it. 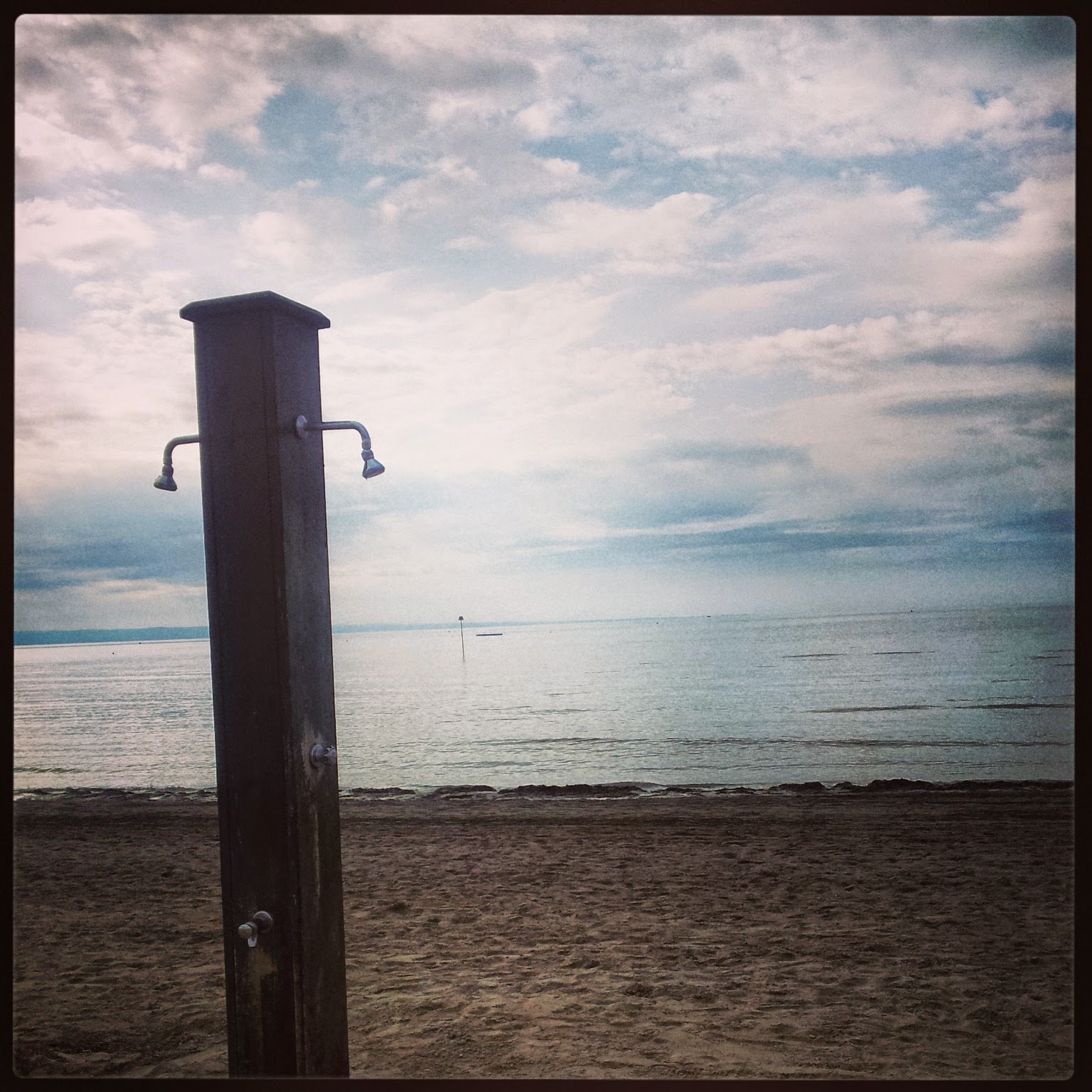 I must confess that the trigger of this choice has been Grado.
Grado is not only a seaside resort on the Adriatico sea: it has a heart, its old part, which is a fairytale enchantment of stones, alleys, bikes and flowers.
For some aspects it's reminded me a mountain village, for others some places in Liguria perched on the mountains mirroring themselves in the sea.
At night, with the lights that paint it in gold, it becomes intimate and fairytale-like - and, dining with a tasty fish dish, under a perch of grapes, in these alleys, is one of those pleasure moments which make an holiday special and memorable. 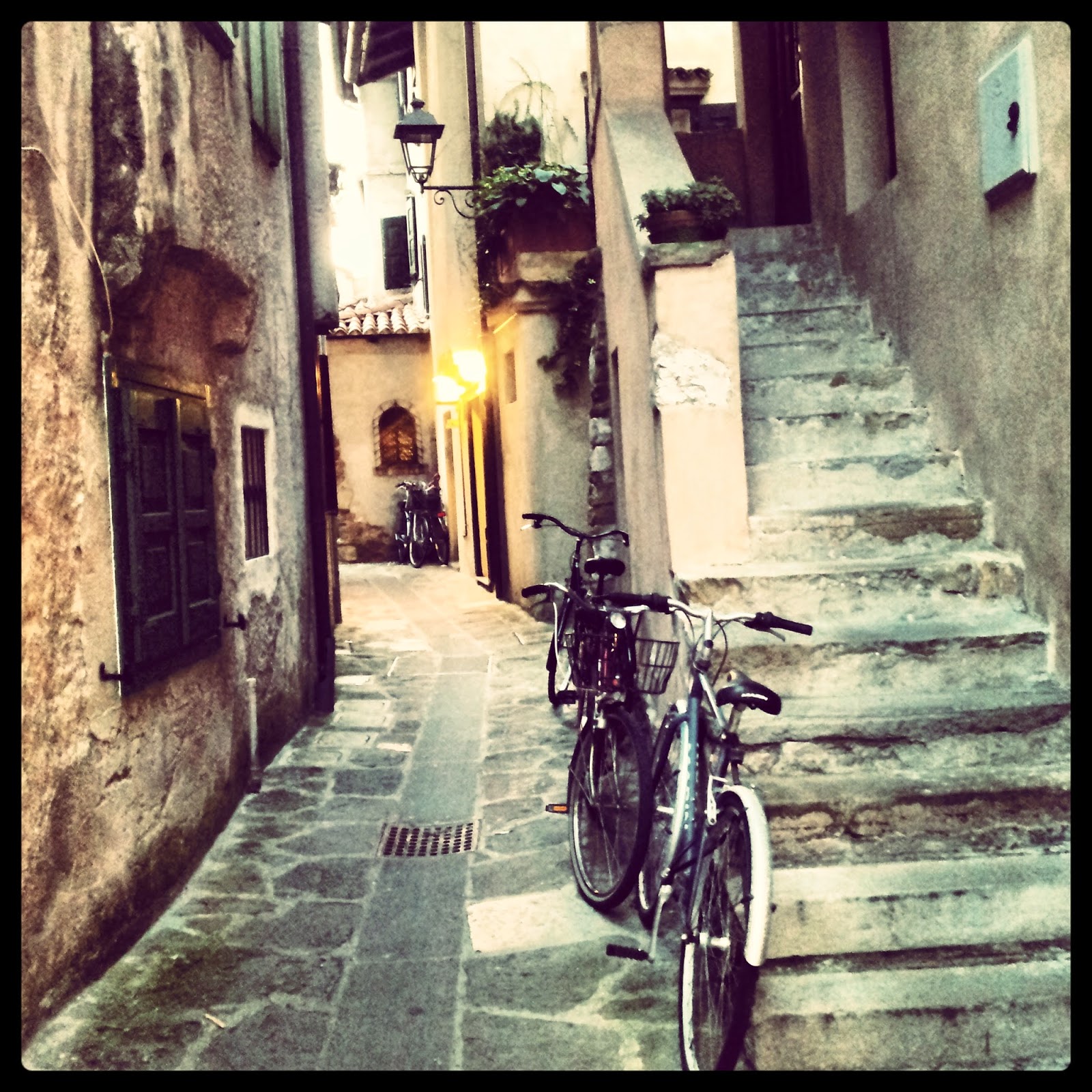 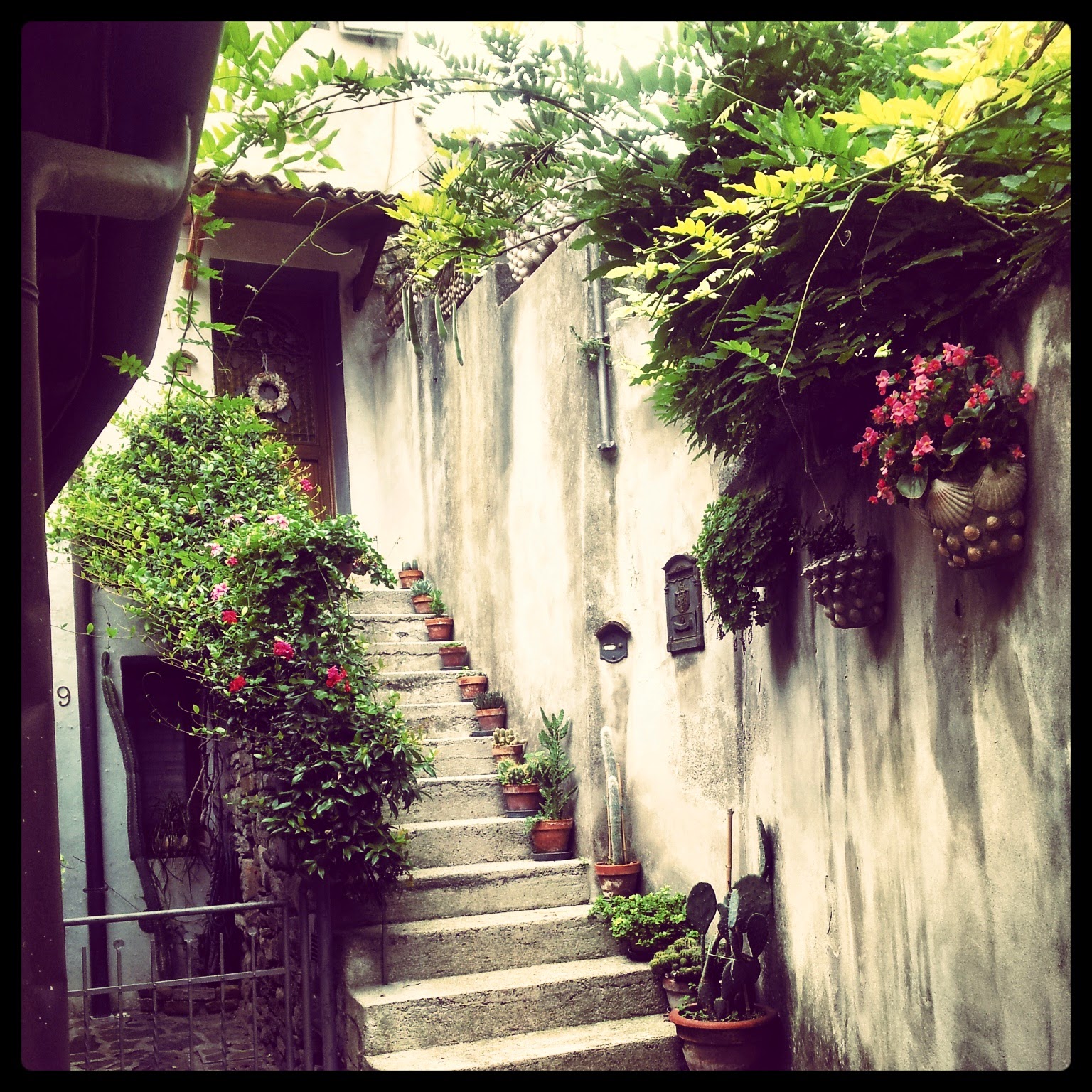 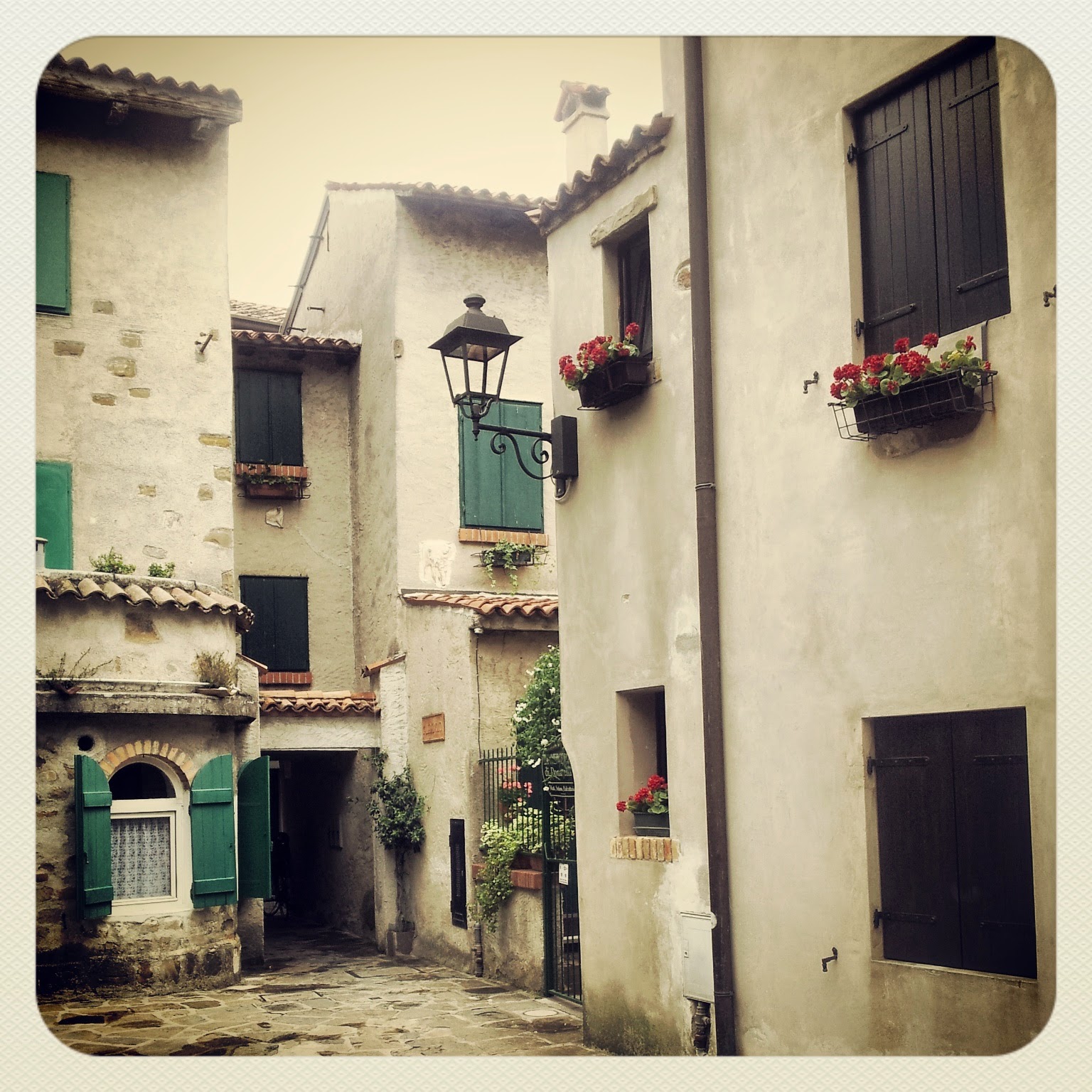 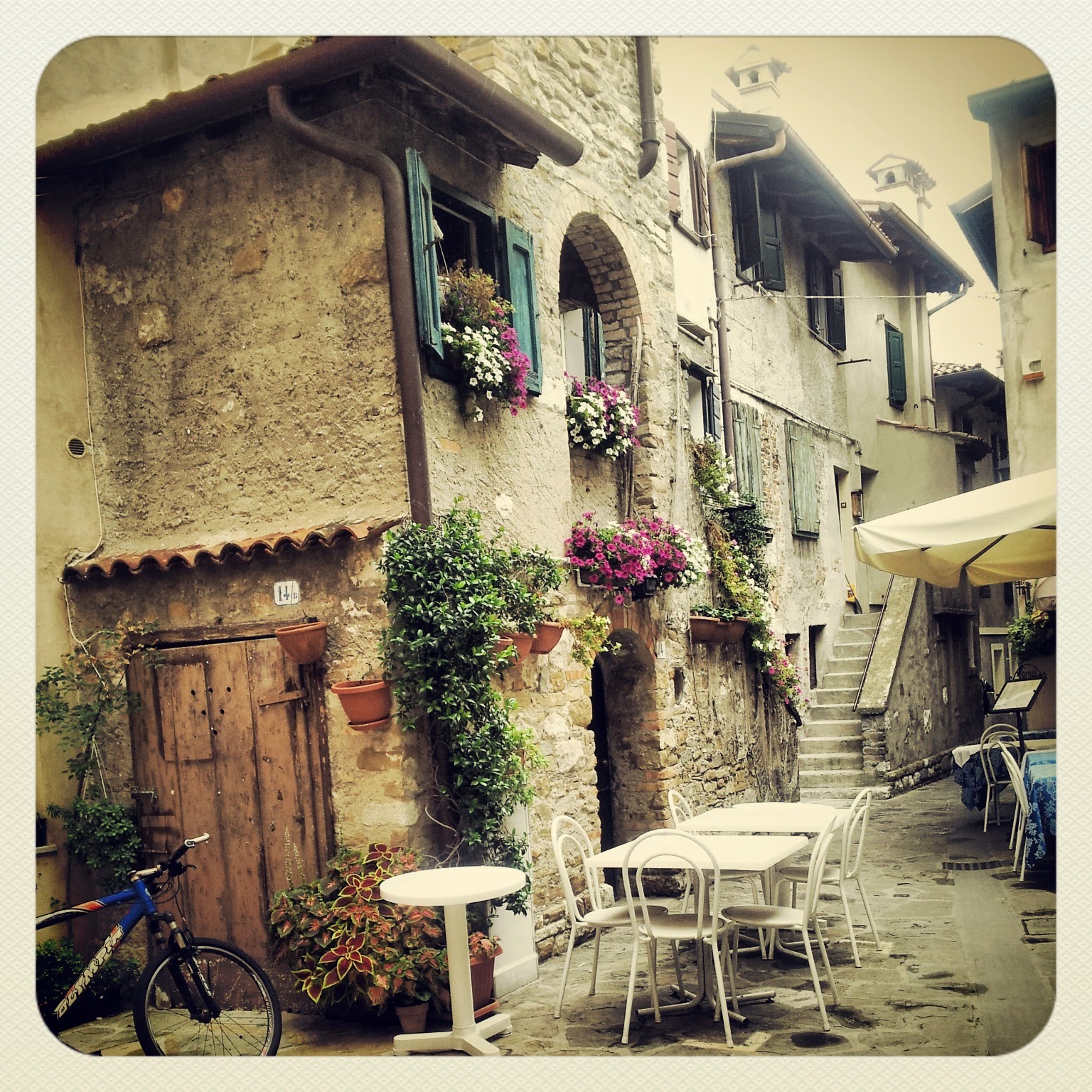 But then there's been him.
The sea.
This piece of Adriatico is not the best one.
You might wonder how it comes that in Puglia, or even in the front neighbours of Croatia and Slovenia, it's crystalline and transparent, while here and in Romagna it's always darkgreen and gloomy.
It's a shallow and muddy sea, you can walk for dozens of meters inside it before the water actually reaches at least your shoulders, but then, after a few steps, when the waves only touch your ankles, you no longer see your feet, you are no longer able to scan the bottom you are stepping on. 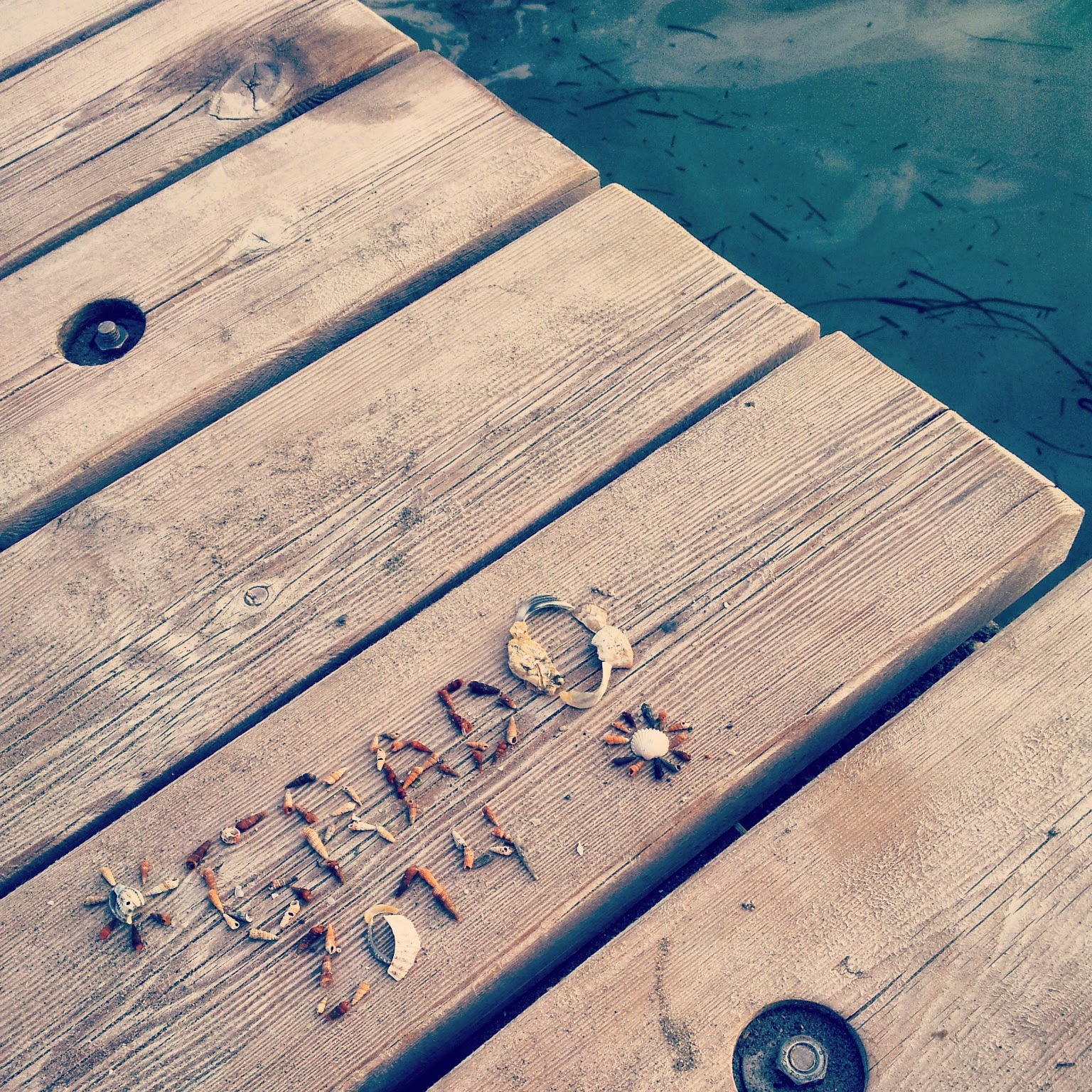 But this "B serie" part of Adriatico is the only one I've got to know, and so this return has relived memories and sensations I had forgotten.
Your skin warm with sun, encrusted with salt, beaded with water.
Wind in your hair, saltiness in your nostrils, salt on your lips.
Hours long walks on the shoreline, with feet dipping in the sand, calves aching - but that's a good kind of pain, it tastes of fulfillment, of satisfaction. Shells that sometimes pierce your sole.
Sand breading you till your ankle, and the beach bed always getting dirty when you lay down to read. Your skin that gets dry after a while, so you run again on the wet shore to refresh it.
Staying in the sun to get dry the swimsuit you're wearing after your bath, as if the sea belonged to you now and you don't want to take it away from your body.
Seagulls planing silent in the sky like white vessels. Rows of yellow beach umbrellas that separate you from him, from the waving blue-green slice at the horizon. 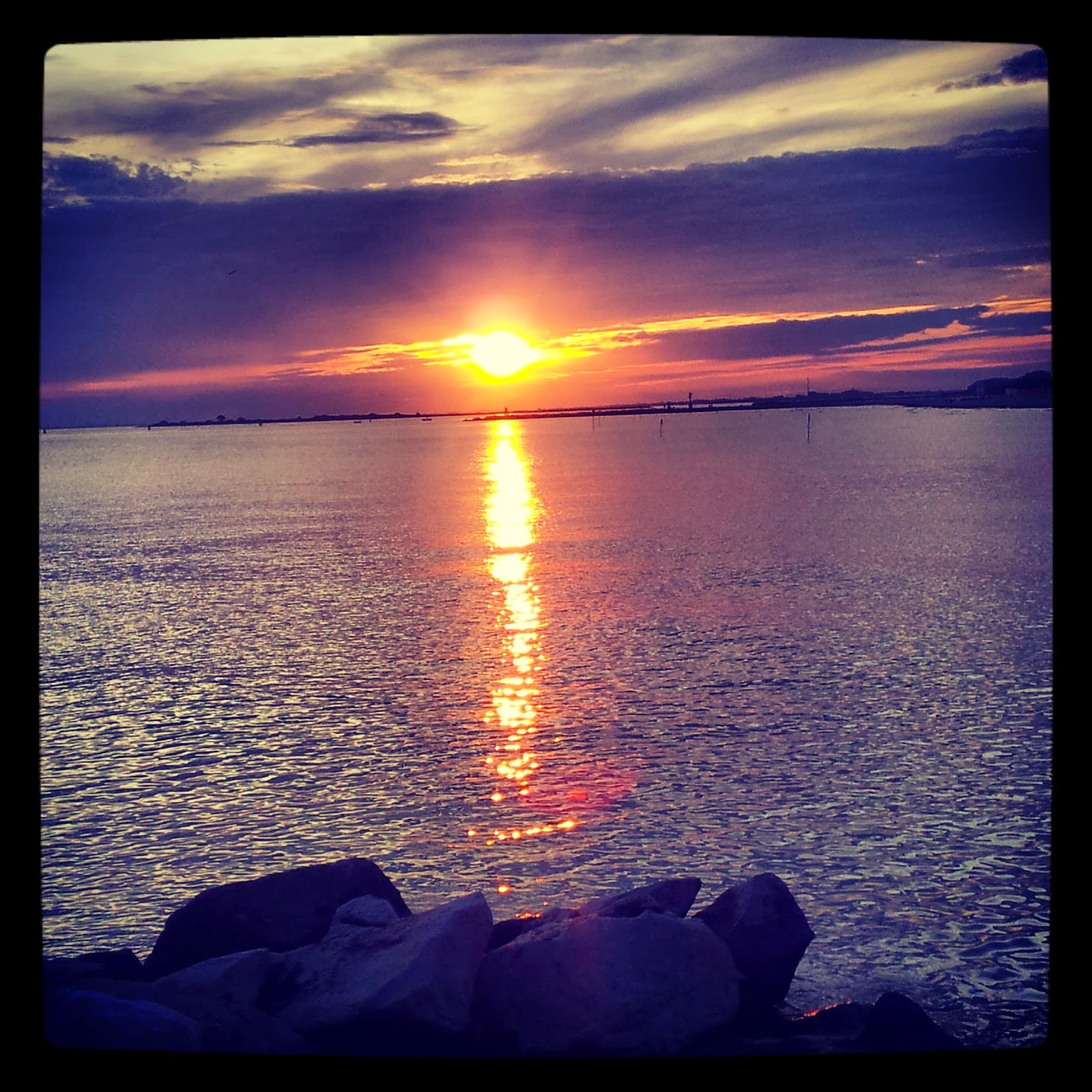 The sensation of total freedom, a bit mixed up with some fear, with some insecurity towards your swimming skills, that you feel when you dip yourself in the waves, when your body gets used even to the most difficult hit of cold, the one at the stomach, and so you hold your breath and dive.
You look in front of you and you don't see anything but blue, turquoise, sky, sea, infinite.
I had forgotten this.
This magic of the sea.
This spell with which it's able to make you feel well even when doing nothing at all, simply by contemplating it.
This sensation of fulfillment with which it's able for a while to turn off your thoughts, maybe also your pains, and to make you feel in peace, to make emerge your most intimate and deep core, to free it from all the obligations and the chains that are packing it, and to make it enter in touch with him, with his infiniteness, with his freedom.


The cure for everything is salty water.
Sweat, tears, or the sea...
(I. Dinesen)