Turin's Cat Café - NOW we can meow about it!

Are you for second chances?
As for me, I always try not to deny them to anyone; but I must also confess that, in my personal experience, almost all the second chances I've decided to give have turned into a delusion. Not to mention third, fourth or ten-millionth ones - since I tend to be recidivous.
But each rule always has an exception, and, today, I've been really happy to have decided to give a second chance to Miagola, the first cat café set in Turin, opened 3 months ago in the pedestrian area of via Amendola.
If you've happened to read it, you will know that my very first review on this place hasn't been exactly positivee: I had written it in a very rainy April Saturday, when the Ginger Cat & me had been quite disappointed about our chaotic lunch had there, poisoned by a very strong disorganization and by noise and confusion that were drawing the cats away, making them stay hidden in their shelters and avoiding stepping outside among blatant adults and running kids.
I've been pondering for a while whether cancelling the forementioned article or not: I was sorry to leave some negative campaign for a place that, in the end, not only has been able to ransom itself, but that is also a very special spot, as we've found out today and as I'll tell you in a moment.
In the end I've decided to leave it, adding anyway a small disclaimer - in this way, if anybody might have had the same kind of not so positive experience with this place that we had (and, according to Tripadvisor, we have not been the only ones), can know that it's sometimes worth it giving a second chance.

This weekend I've been the pleasure to enjoy the company of Tabby Cat and Adventurous Cat (aka Anto from We12travel, an interesting blog about nature & outdoors which always makes me daydream with its spectacular destinations) - and that's the way the second chance has popped up.
Tabby really wanted to try a cat café, Anto needed to catch the airport shuttle around lunch time - so the Miagola won over the other Turin's cat café, the Neko, for logistical reasons, sinche it's just a few steps away from Porta Nuova station. 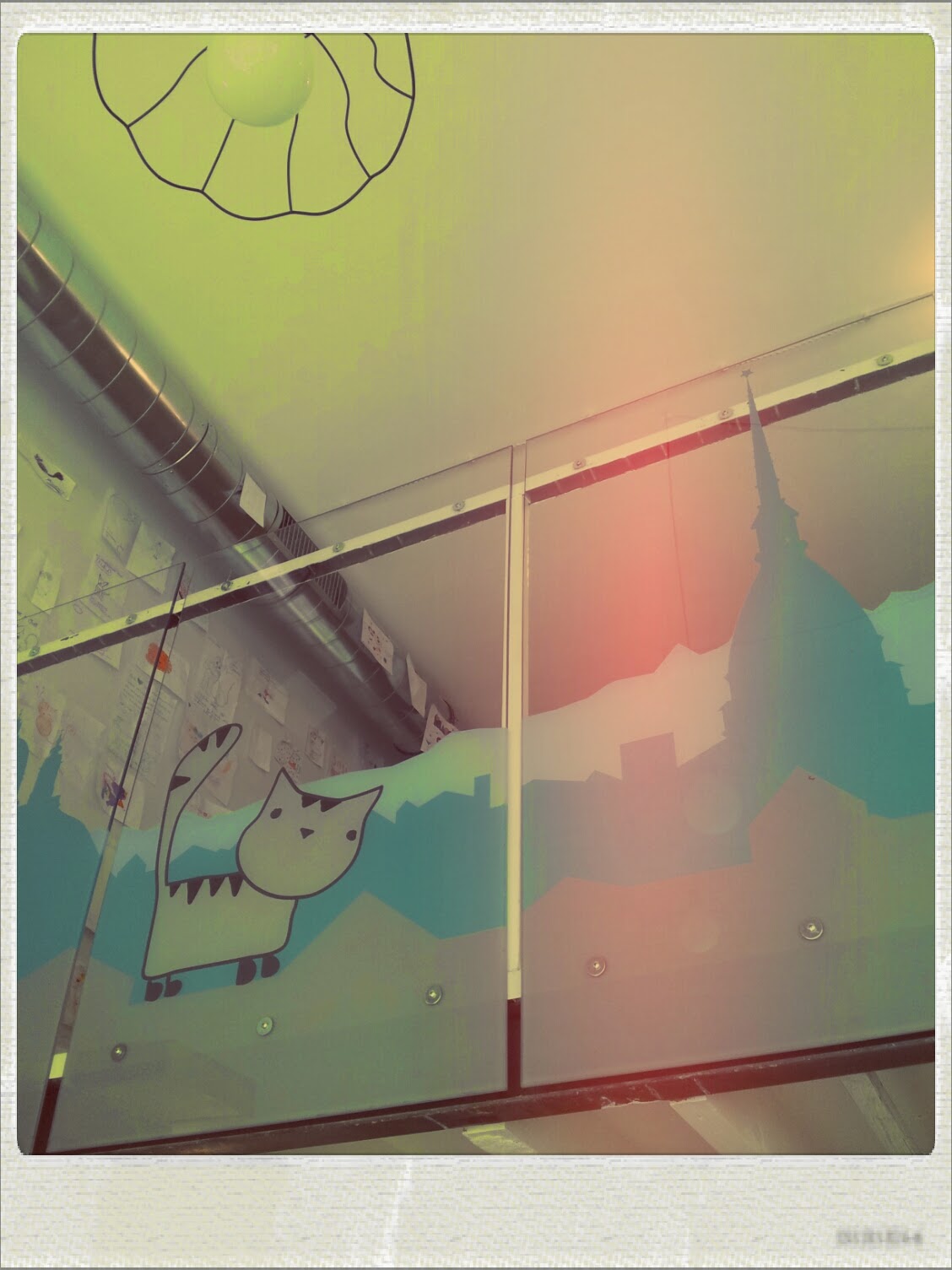 The atmospheare was surely more quiet and pleasant than it was during my previous visit: less human beings and more felines, a relaxing classical music in the backgroung, a tasty Sunday brunch and also a couple of new entries in the cats' team, Titti & Silvestro, two smart black&white siblings, that have immediately got noticed for being friendly and bubbly.


But, maybe, what has actually made a difference has been having been able to hear from the voice of the owner herself the story and the dream laying behind this project.
Each place has its own story, and I'm always glad to get the chance to hear about it, because it's helpful to make you see things better, and not only "watch" them, to give them a kind of emotive shadowing that gives them more depth - and that, in a way, starts to make you feel as if they were a little bit yours as well.
Telling the story of a place means to give a tiny piece of the soul of this place to whom is listening to you, or to whom is reading you.
And this is one of the main reasons why I've decided to open this blog: when you give pieces of a soul, whether it's of a place or of a person, who gives them away doesn't actually lose them - it's more like he shares them, he makes them get amplified and multiply, giving, hopefully, something good also to whom is receiving them.
When you donate a piece of soul you don't have any holes left: instead on the piece you give there's a connection growing, a tie with the one who receives it. 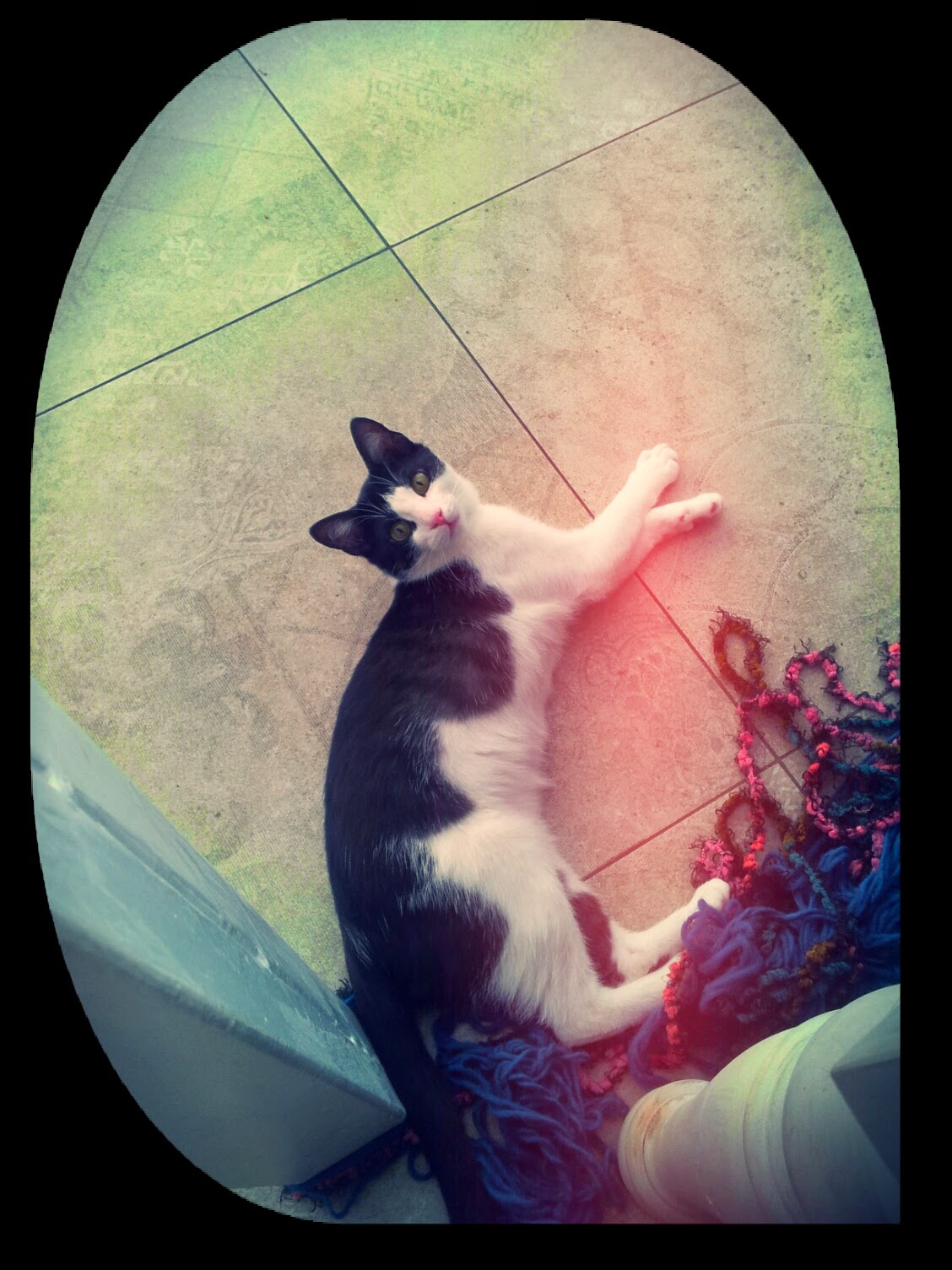 Miagola Café is born from a dream, and behind this dream there's a lot of passion.
You can hear it from the words of the owner, you can see it from how her eyes sparkle when she talks about it.
I like people who have dreams.
And I like them even more when they try to make them come true. 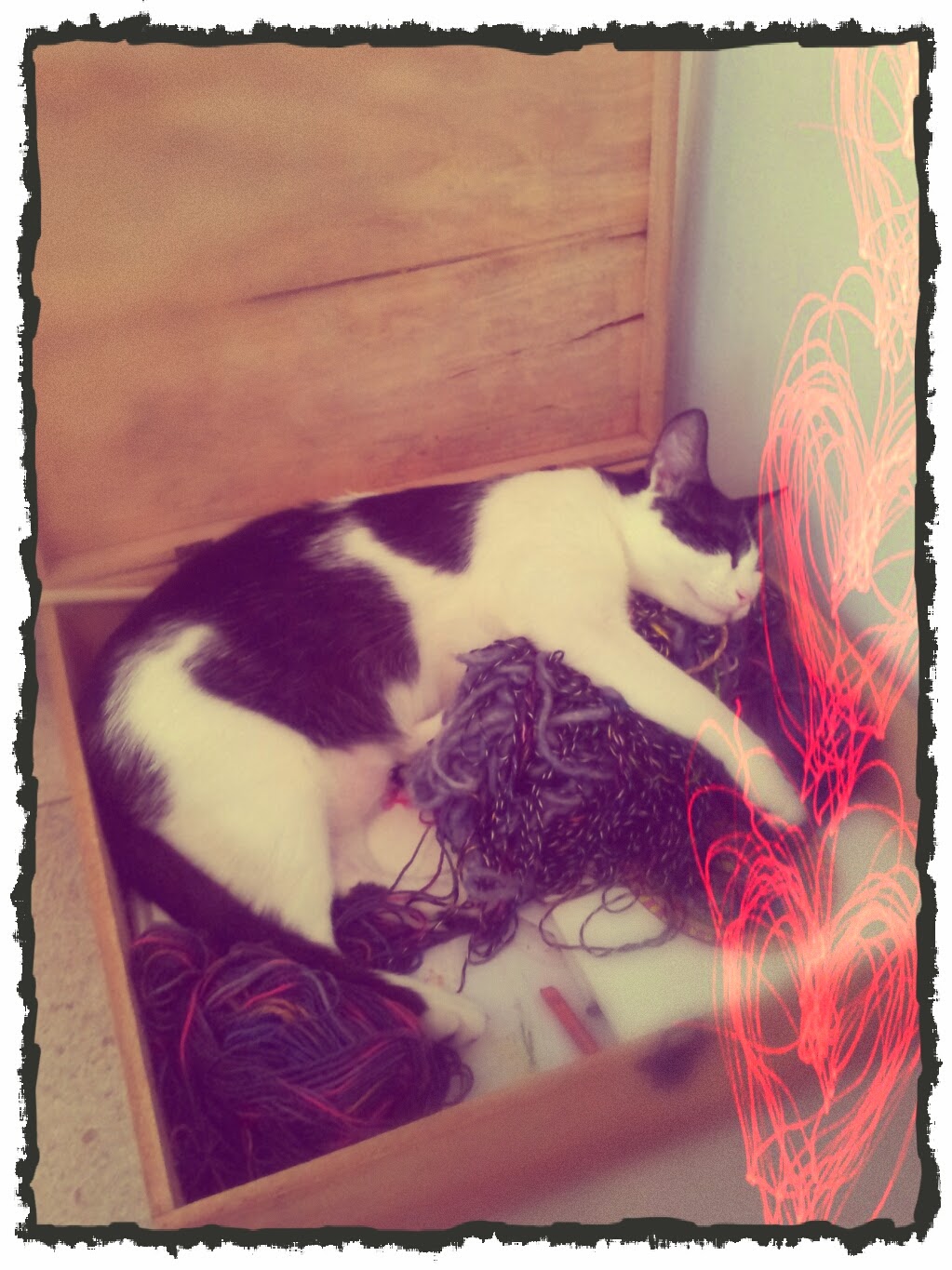 To dream you need fantasy, you need sensitiveness, you need a sight that is able to see things in a different way.
But to make dreams come true you need courage, a lot of courage.
Courage to make the first step, courage to leave the pre-built railways that you are following in order to trace some new and different ones, courage to face the obstacles, the troubles, the skepticisms.
Courage to fight everyday to support your own dream.
But, maybe, when your dream is so big, it's actually the only thing that you can do.
When your dream grows it cannot stay just inside yourself anymore: it feels stuck among your chest and your heart, it needs to get out. Keeping on following the same road, traced and steady, might seem easier on the surface - but it's not like that.
It becomes really hard, when you have your grown up dream pawing to get out.
Those who dream, know it.
And I do.


"The city is not ready yet", "Italy is not a suitable country", "It won't work".
This is what she's been told when she's started to present her idea, to make her dream go out.
But, after all, this is what all dreamers are being told, isn't it?
I must confess this is what I have thought as well, at first.
And I must confess that, after the first disappointing experience, which had made it seem just a good idea roughly put in practice, spoiled by chaos and confusion, I had feared to have found a very quick and merciless answer to my hypothesis.
But things will never change if nobody ever tries to, with something new, with the strength of someone who believes in her own dream.
Two months after my first, disappointing visit, things have improved.
And I hope they will keep on doing that. 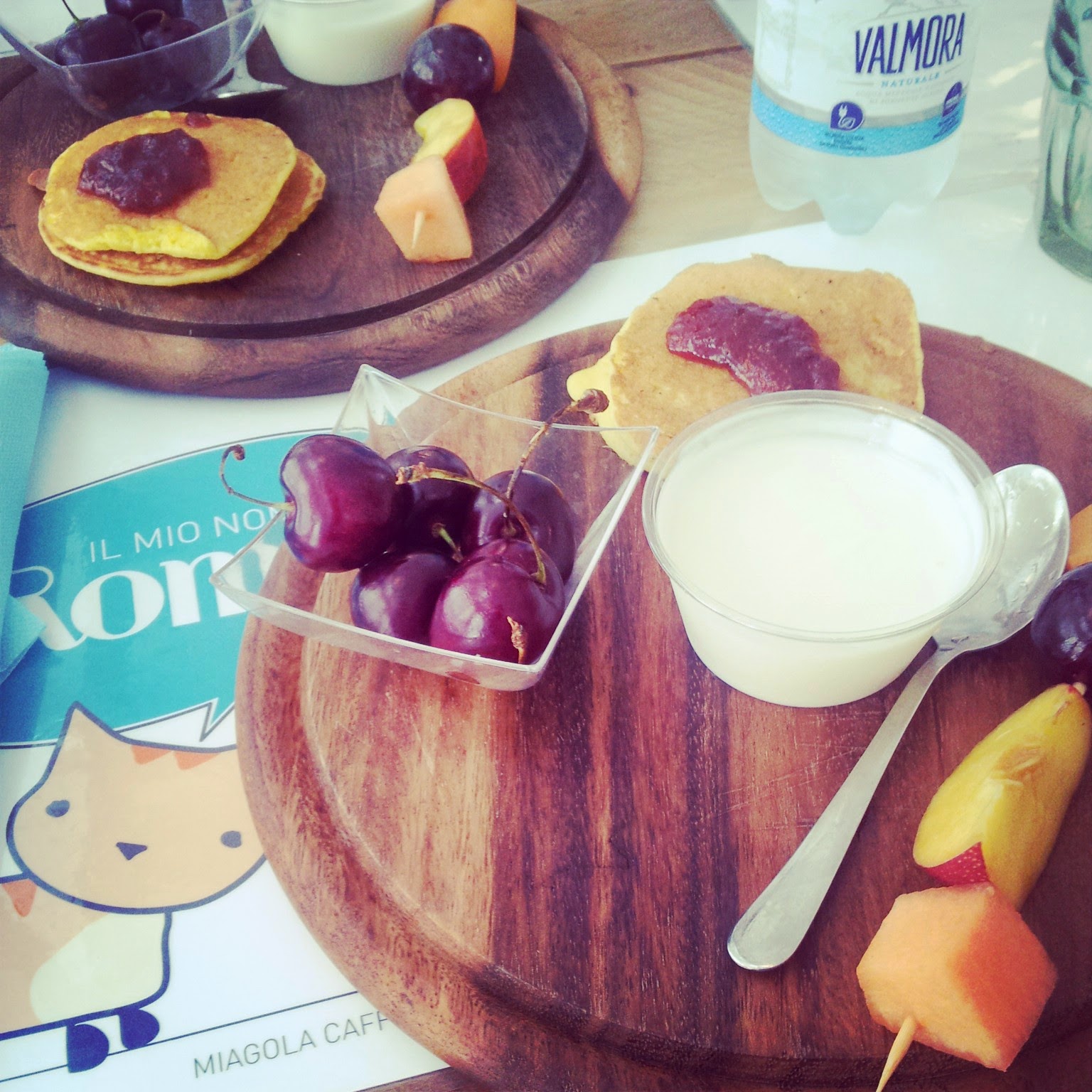 Enthusiasm and passion make grow ideas like mushrooms, and here they already have quite many.
There are regular events such as English conversation, very useful to do some language practice and to get to know new people, or educational moments for kids, where they are taught to love and respect animals, through drawings and tales reading.


We have also been given a sheet of paper and some pencils to do some doodles or a thought: it's a way to stimulate creativity and expression, to invite people to stop and think, to look better at what surrounds them, to gather what they find most beautiful, or cute, or envolving.
It's a simple exercize that we should learn to do daily, in order to get to value more what we tend to keep for granted or that we maybe don't even see - and that instead makes our days more sunny.
Drawings are then to be posted in one of the six wooden box that are near the kitchen, each one of them dedicated to one of the cat café's cats. 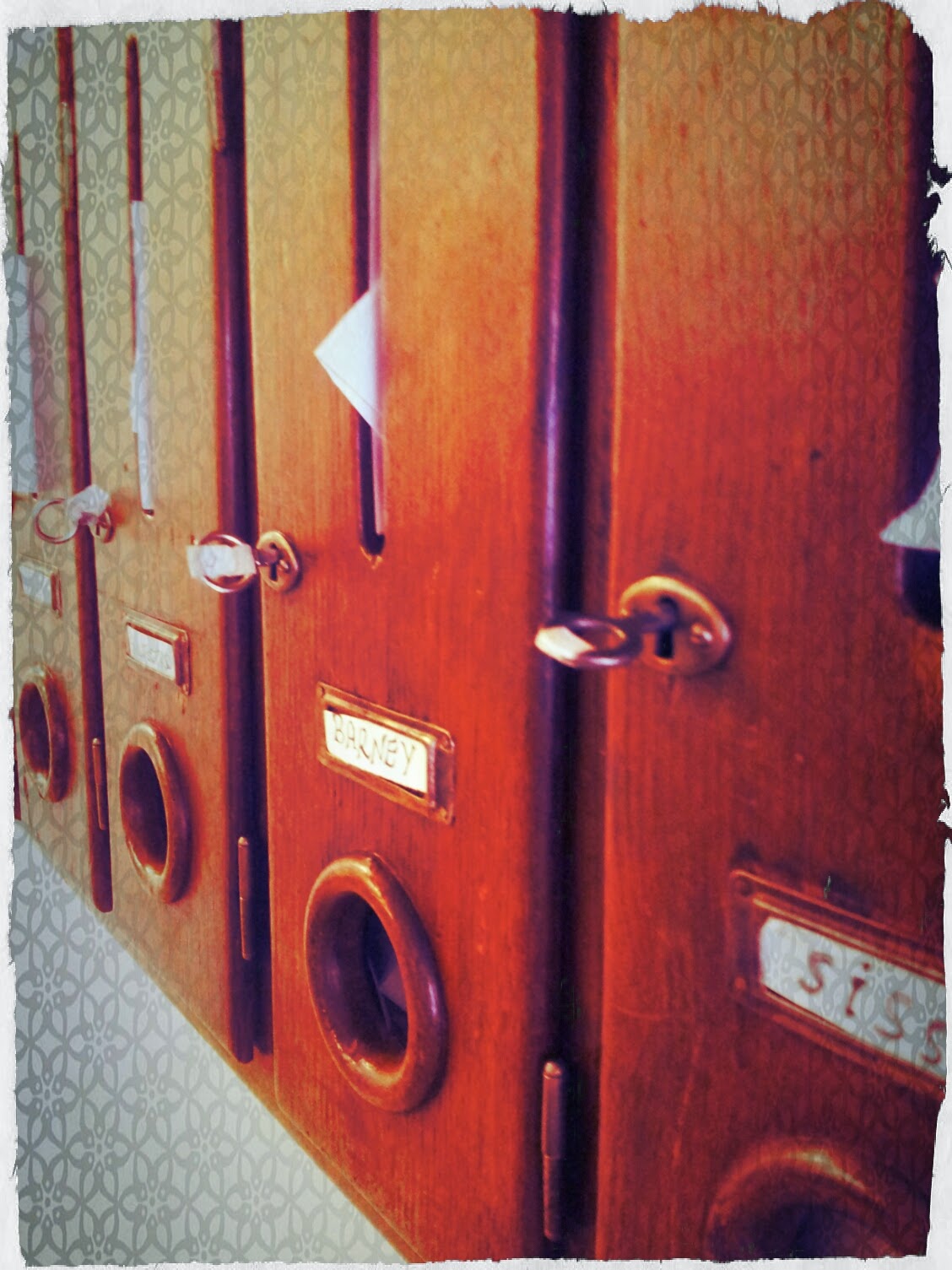 On Mondays (where the café is closed) the boxes get emptied and the drawings are being hanged at the walls: coming back and seeing your drawing is a way to remember the moments spent there.
And so, when I'll be able to see my doodle, not only I will remember the great weekend spent with Antonette and Tabby Cat, but I will also remember how nice the re-discovery of this place has been and how good this brunch has been, because it tasted of so many things: it tasted of deserved second chances, it tasted of how strong can be the one who believes in her own dreams, and it tasted of a very beautiful story that I've immediately wanted to share. 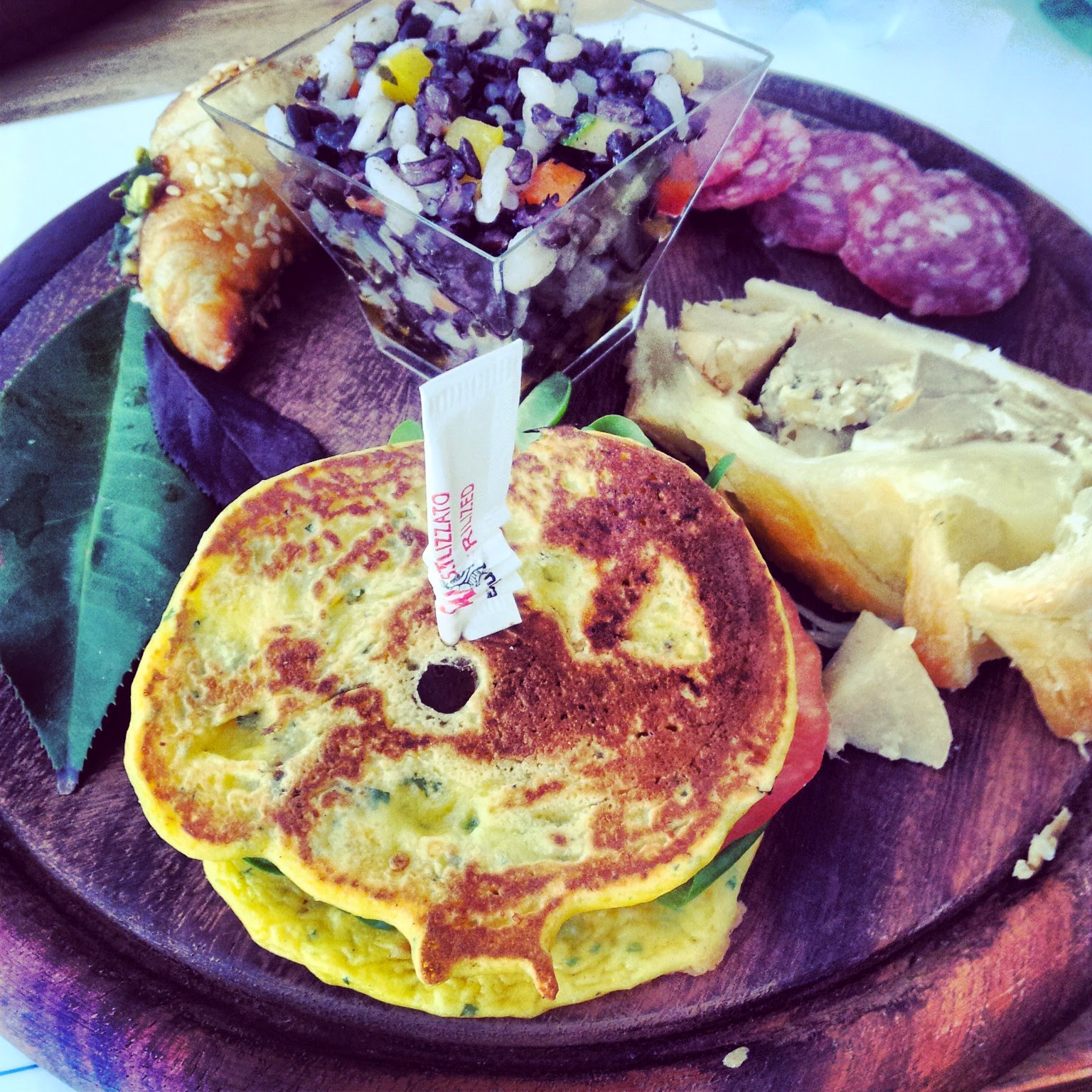 And here there are so many stories to share: even if it's just three months old, this place has already worked as a set also for a marriage proposal, made with cards hidden in the cats' wooden boxes.
After "Miagola" in Italian means meowing and it's been called this way because it would also want to become a place where socializing and sharing: that's the reason why it only has big tables, in order to encourage people to communicate and get to know each other.
I must admit that I'm not too good at this sort of stuff: I'm a bit of a loner cat, who prefers observing and listening, rather than talking. 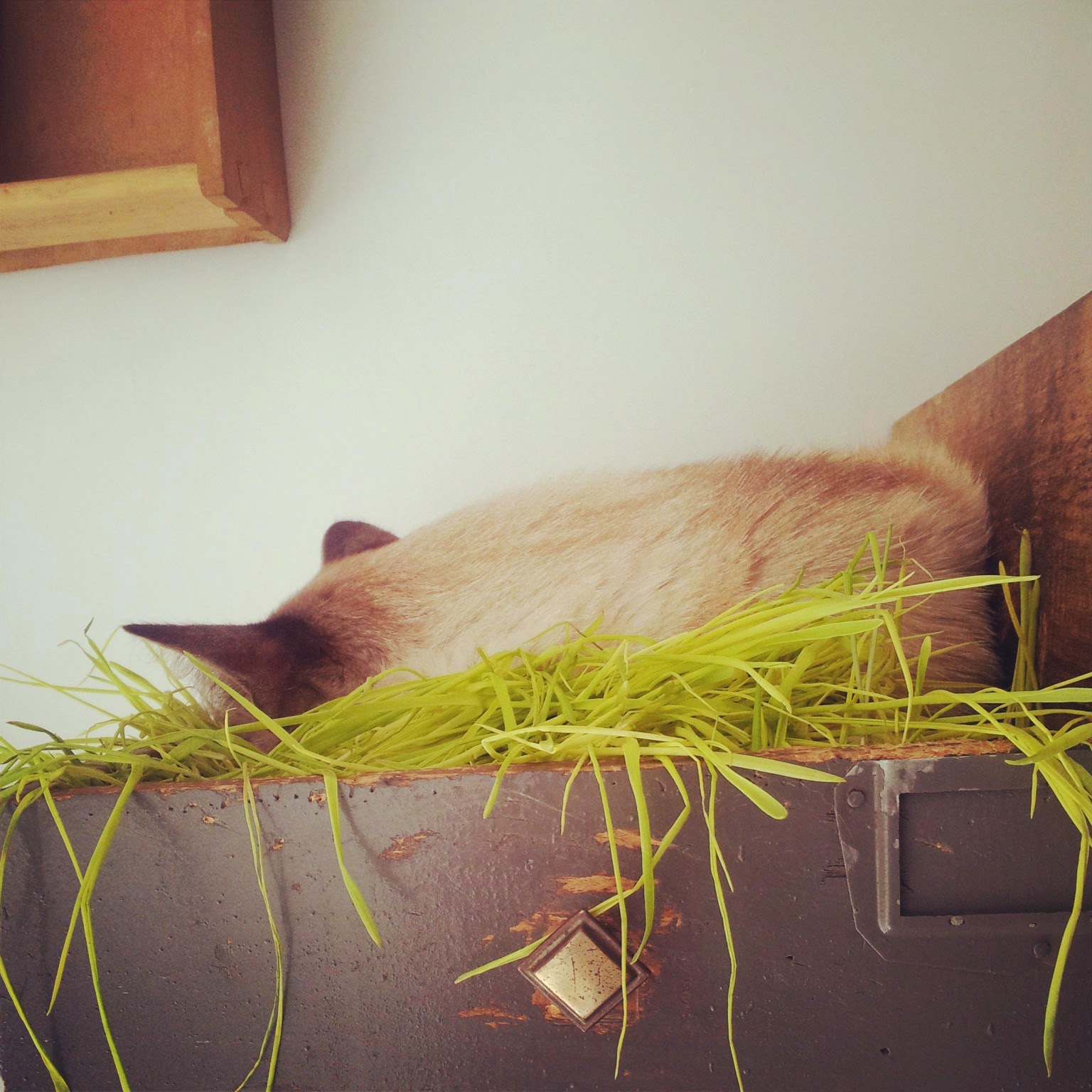 I would stay crouched in one of the drawers set on the wall, like Sissi does, to watch people who come here and to listen to what they say.
I don't meow too much, but I still have so much to tell.
It's only that I've always felt it more natural doing it in a written form.
So here is my little tribute to this cat café, to this small big dream which is becoming real: here is the small piece of soul that I've been given today and that I want to share with you. 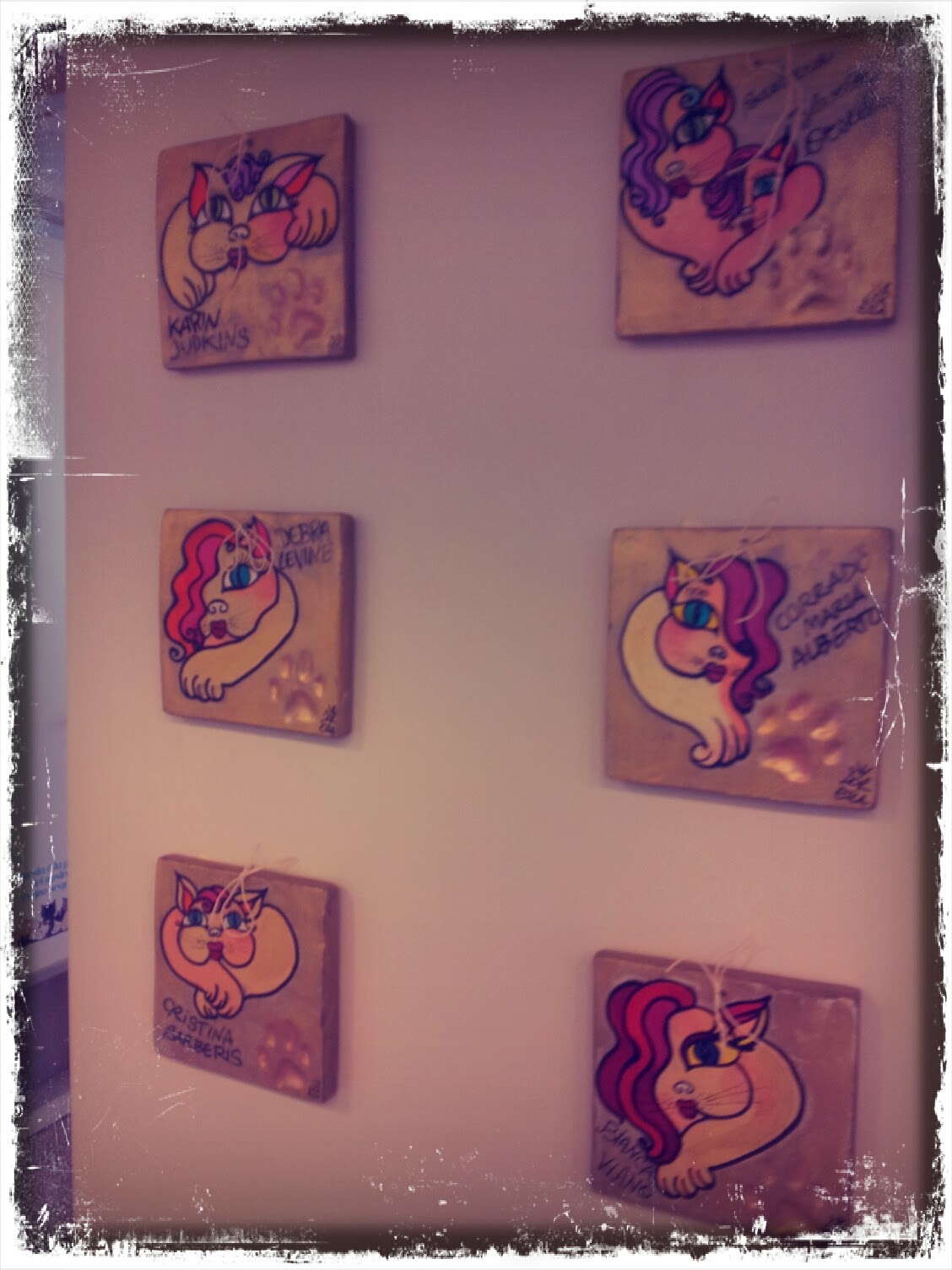 The cat café would surely have so many stories to tell: as the owner has said, there could be enough to write a book.
And it surely would be a good book: as Harold Weiss used to say, "A cat would never sleep on an ordinary book". Mind you to write one.
And so I wish to the Miagola and to its owner that their book might become really long and interesting.
While we wait for it to be written, I dedicate them this post...
Pubblicato da Serena Chiarle a 00:28