Have you ever fallen in love with someone completely different from you? With someone so different that, before getting to know him for real, you'd always thought you would have hated him?
I have, and it's happened at first sight.
I'm talking about New York City, also known as THE City - which I've always thought it was somehow snooty and stilted, but now I do get it.
New York is "the" City for antonomasia because it has the quintessential charisma of urbanity. Sure, it is big and it is loud but it does it with a style: that's not chaos, that's dynamicity and it actually melts in harmony as a feature of a city that is the center of the world, that neverendingly creates and is on the moving.
I've never thought I could have been a NYC girl: I'm all for cosy atmospheres, Old Europe, silence and quiet, places that makes you feel like you are stepping back in time, and I thought that the Big Apple, so modern, so rampant couldn't really be my cup of tea.
Still I thought it was a "must" to visit it for once in a lifetime, so I was curious to see it.
And I'd say it's been the biggest positive surprise in my life as a traveller so far.
That's why, basically, I sometimes end up choosing to visit places that don't really appeal me at first: I like giving myself the chance to get surprised, and I like getting confronted with something quite different from my usual destinations, because it might help to reveal some new parts of myself.

My very first approach with New York has been by stepping out of Penn Station (which I've learnt is short for "Pennsylvania" - while I thought it was the surname of some homonym of mr Sean Penn), leaning from the sidewalk waving my left arm while screaming "Taxi!!" just like in the movies, and then spending all the way from there to our hotel looking above with my head turned up and my jaw dropped in amazement.
Reaching the hotel, walking out of it and wandering along all the Nth Manhattan's avenues in the same way, with the head turned up and the jaw dropped. I almost got a bit of stiff neck during my first day there, from looking above so much ;) 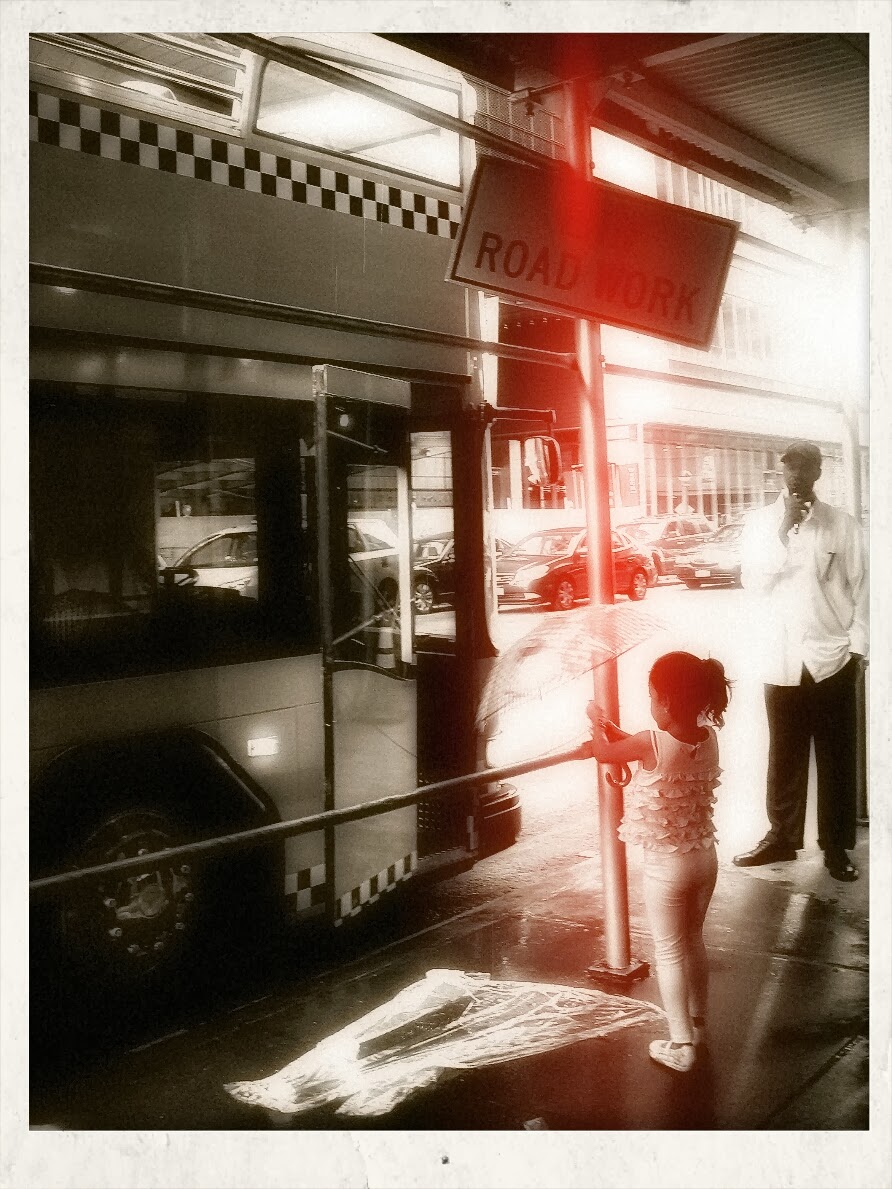 Our hotel was just behind Times Square, so that's been basically my second approach with the city.
This is what I saw as soon as we got out from the hotel: 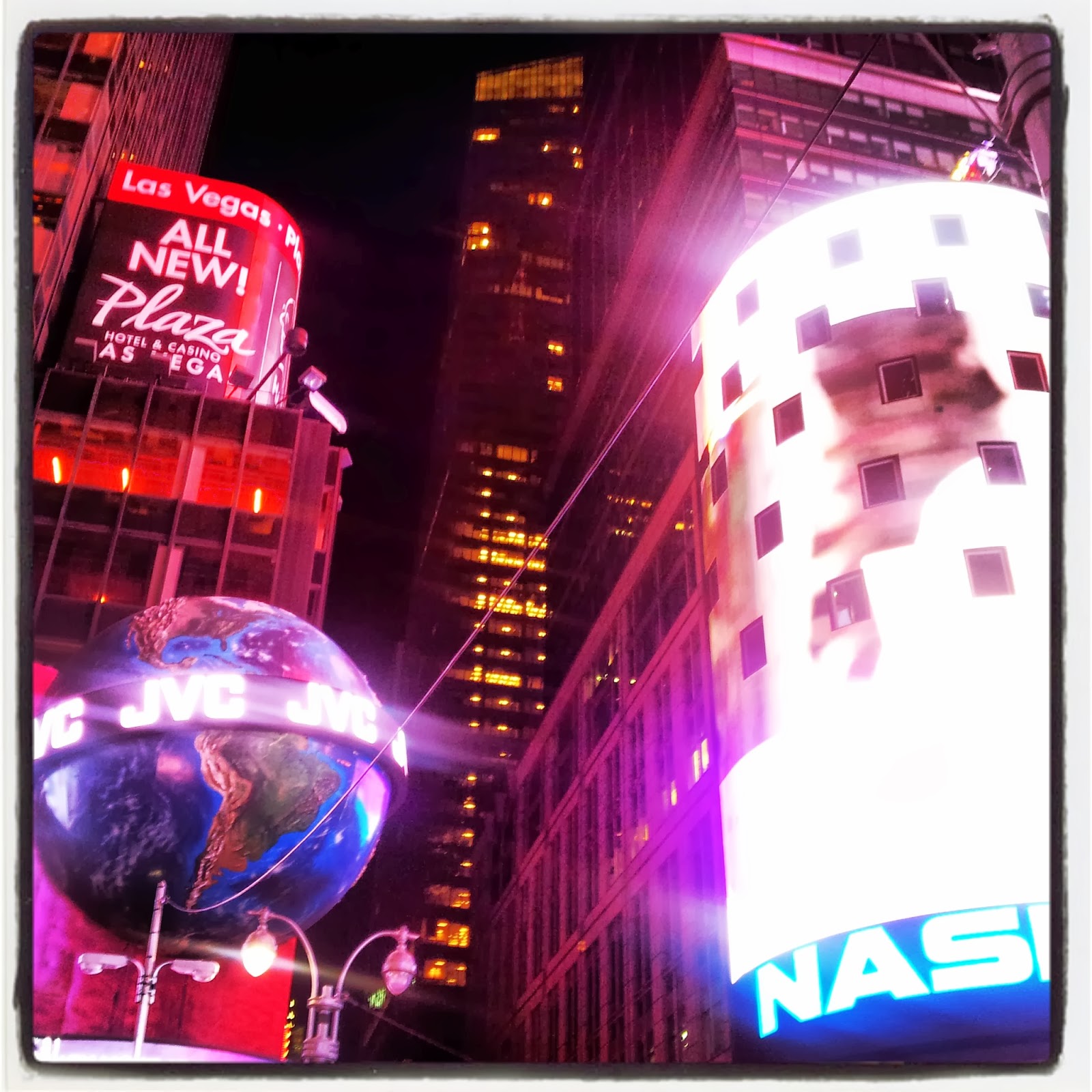 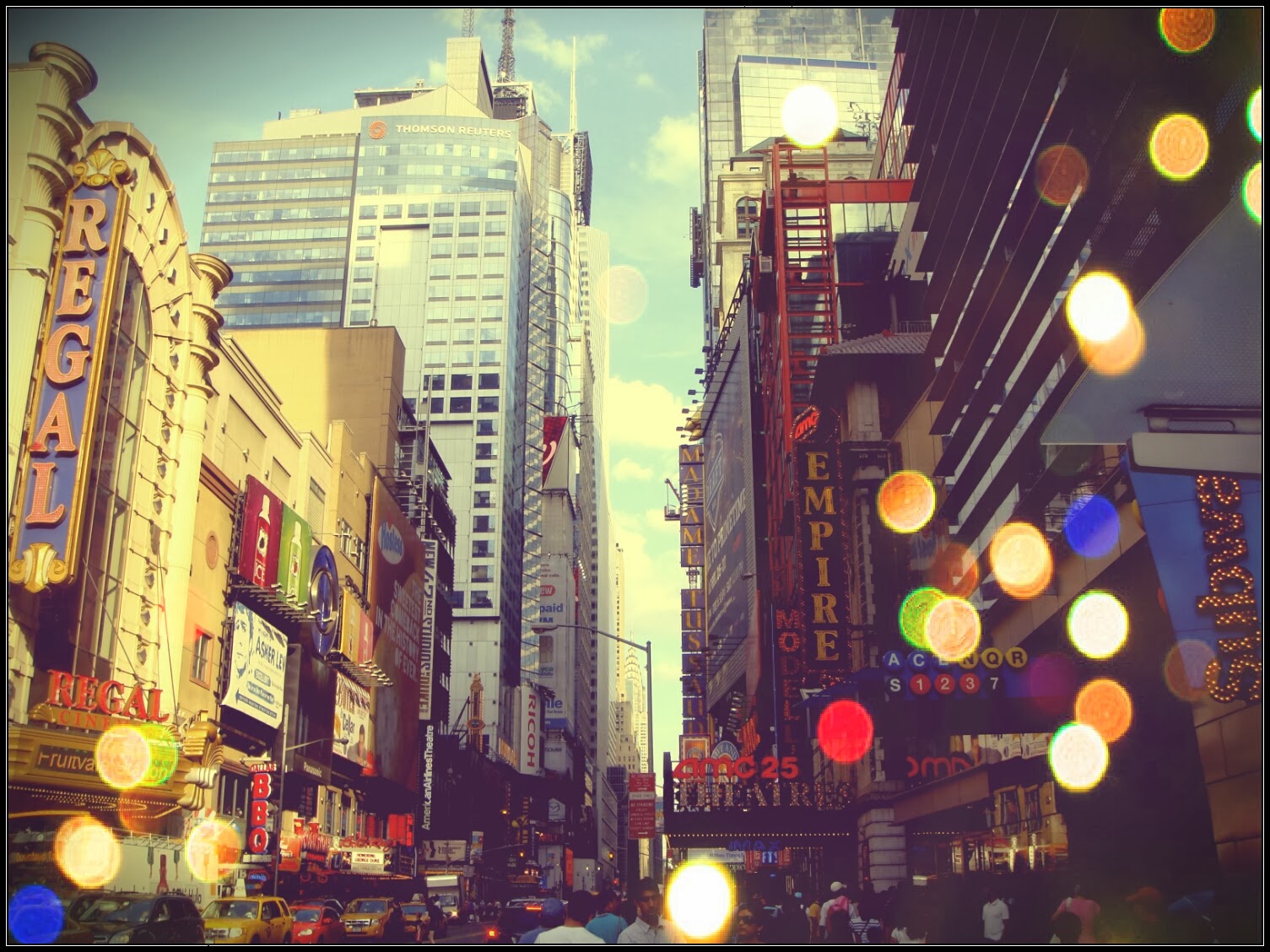 You might think it's too much, but that's the way it is. Times Square is the temple of mass consumism - and may you be critical towards it, or may you be one of its adepts, it anyway is a temple. 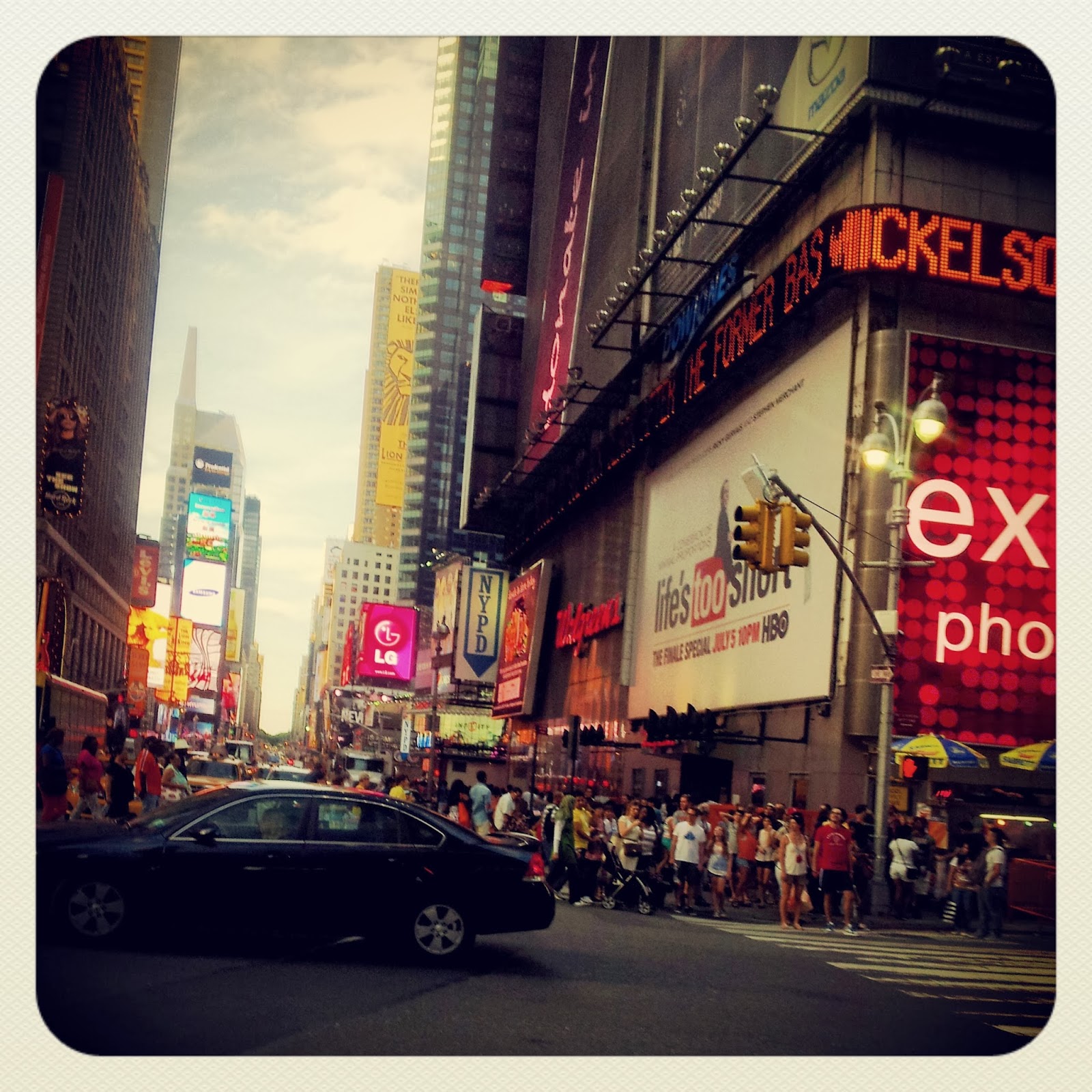 A temple of the concrete jungle where dreams are made, like Alicia Keys & Jay-Z sing.

One of the first thing I notice when visiting a new city is its smell.
Every city has its own smell, which something that charachterizes it and kinda gives it a personality: London smells of vinegar chips, Bruxells of waffles, Lisbon of grilled fish.
Here I've stumbled upon the fact that New York's smell is hot-dogs'. 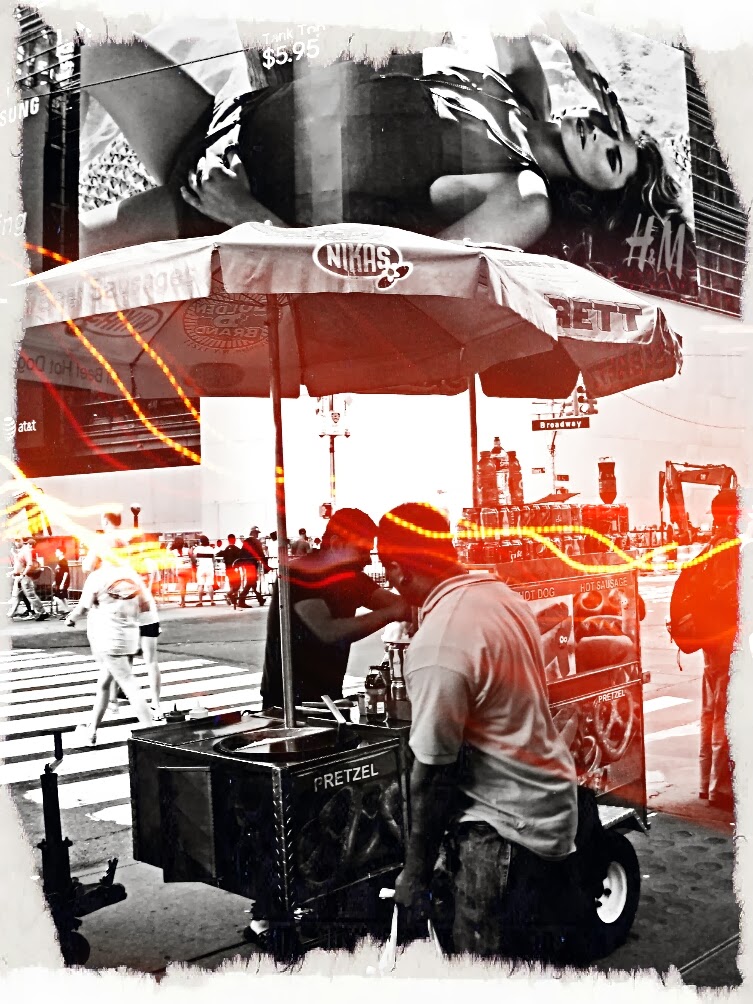 And then again some more skyscrapers, and some more looks above.
Skyscrapers enchant me. The first time I had seen them was in Toronto, and I was already pretty much amazed there - but here... it's like the kingdom of skyscrapers. It's like loving candies and visiting Willy Wonka's factory. It's like loving black cats and meeting panthers. 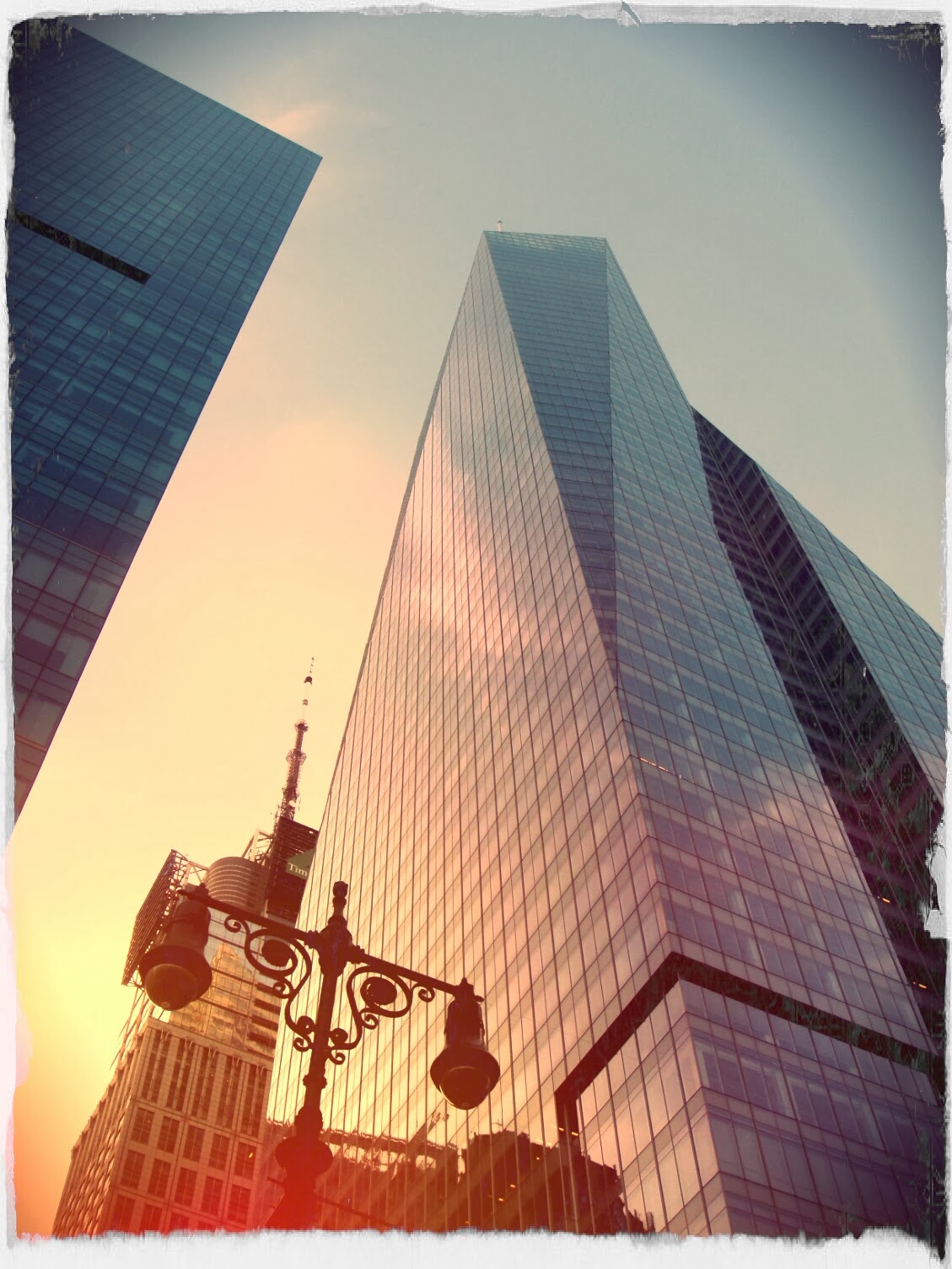 I went crazy with pictures: skyscrapers are among my favourite subjects because they provide interesting mirror games as they do reflect each other on their surface. 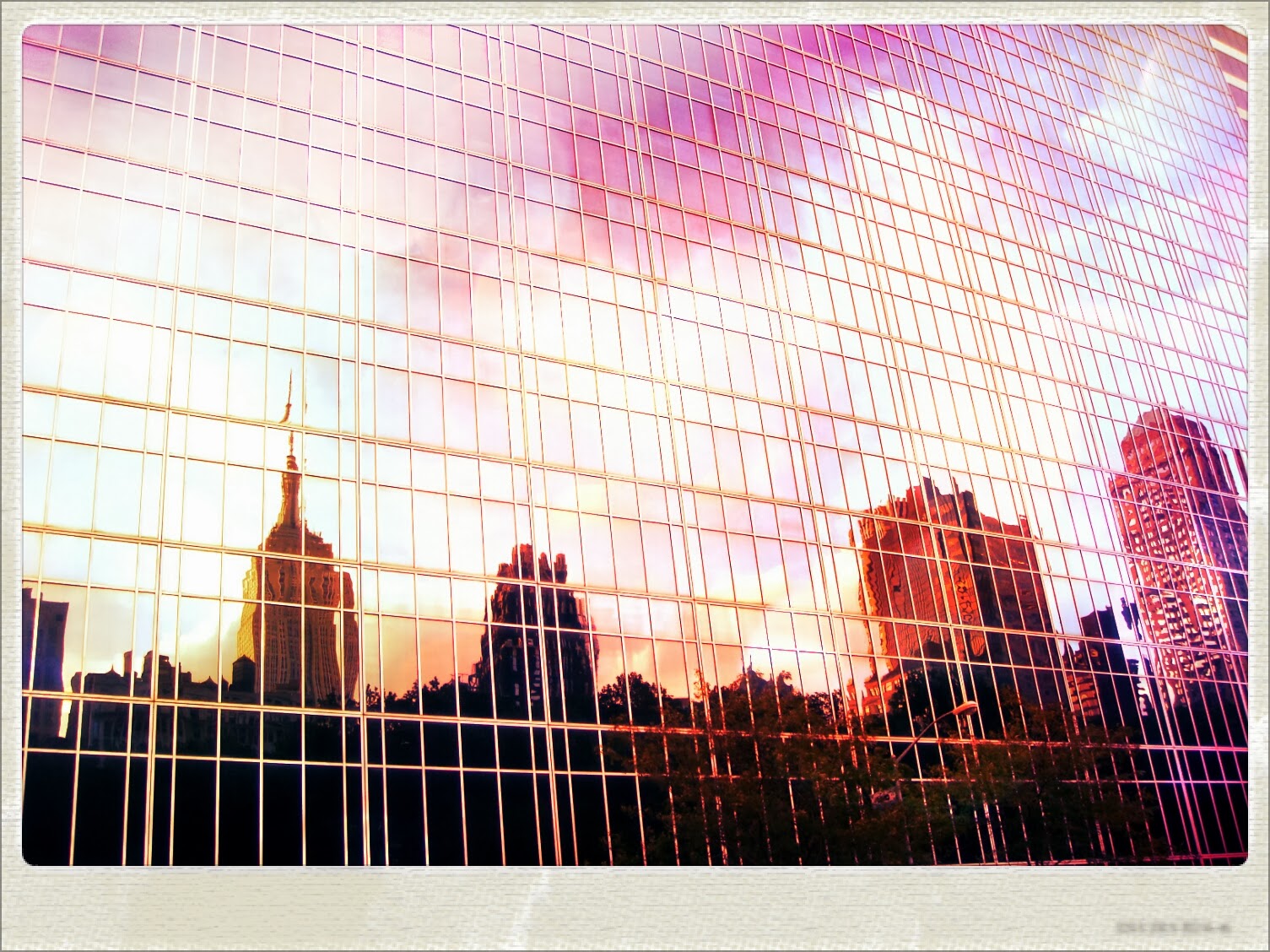 The prettiest is the Chrysler, with its seven arches shining spire and its eagles gargoyles which provides it a touch of medioeval charme - just as if it was a sort of cathedral coming out from some kind dystopian parallel world. 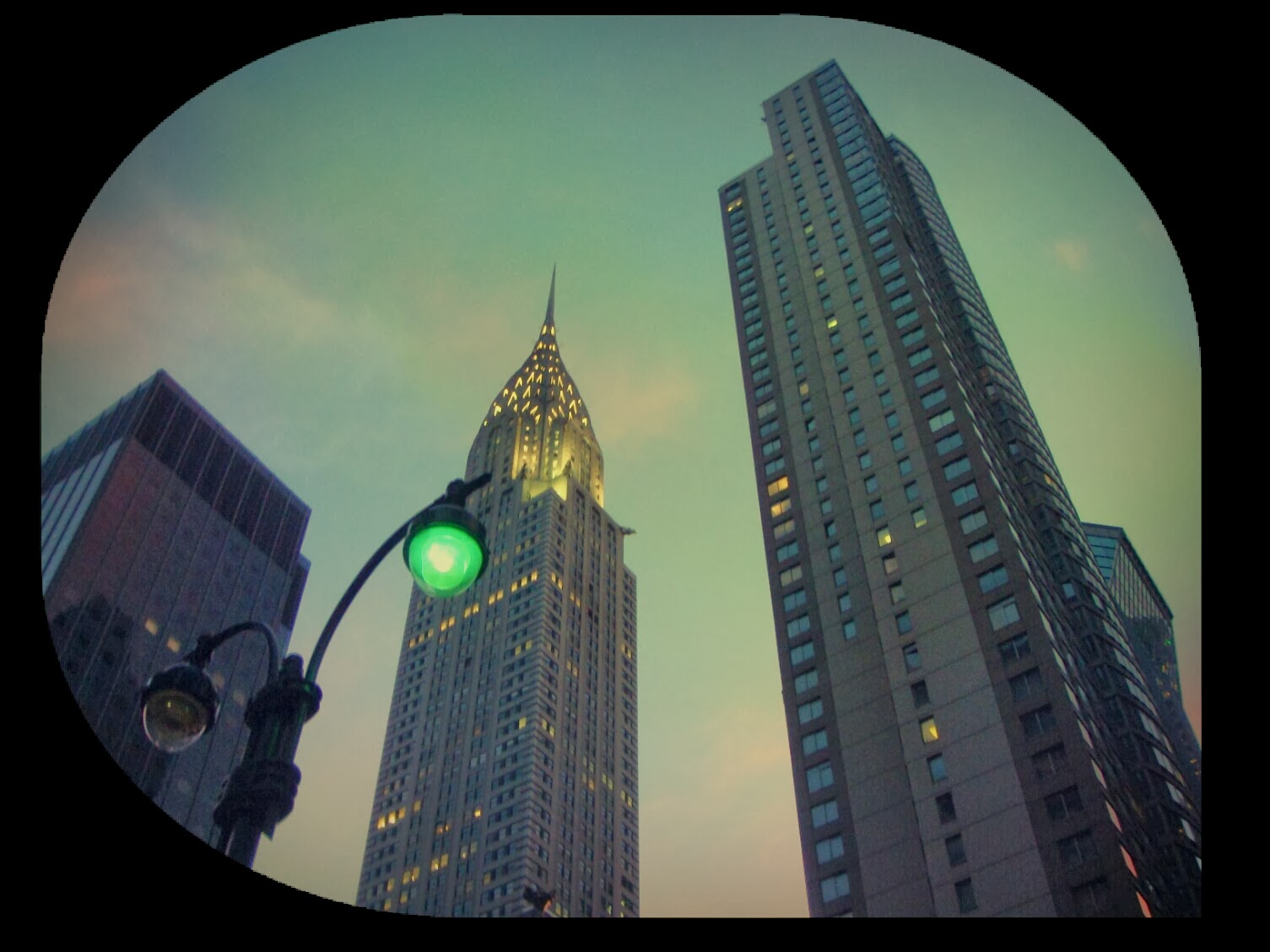 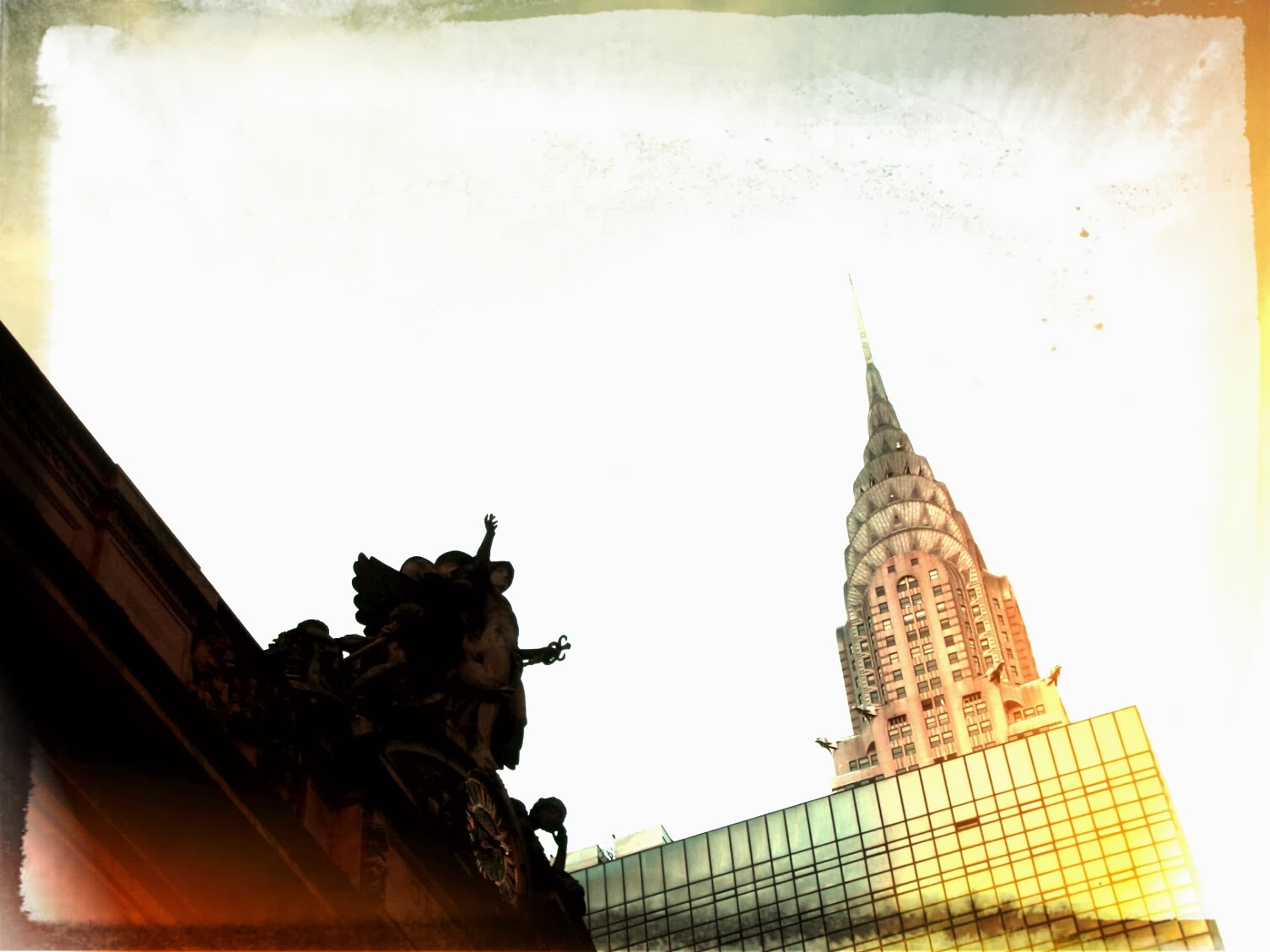 Then there was this one called Helmsley Building, which is less famous but that combines in a really harmonic way modern architecture with a touch of baroque. 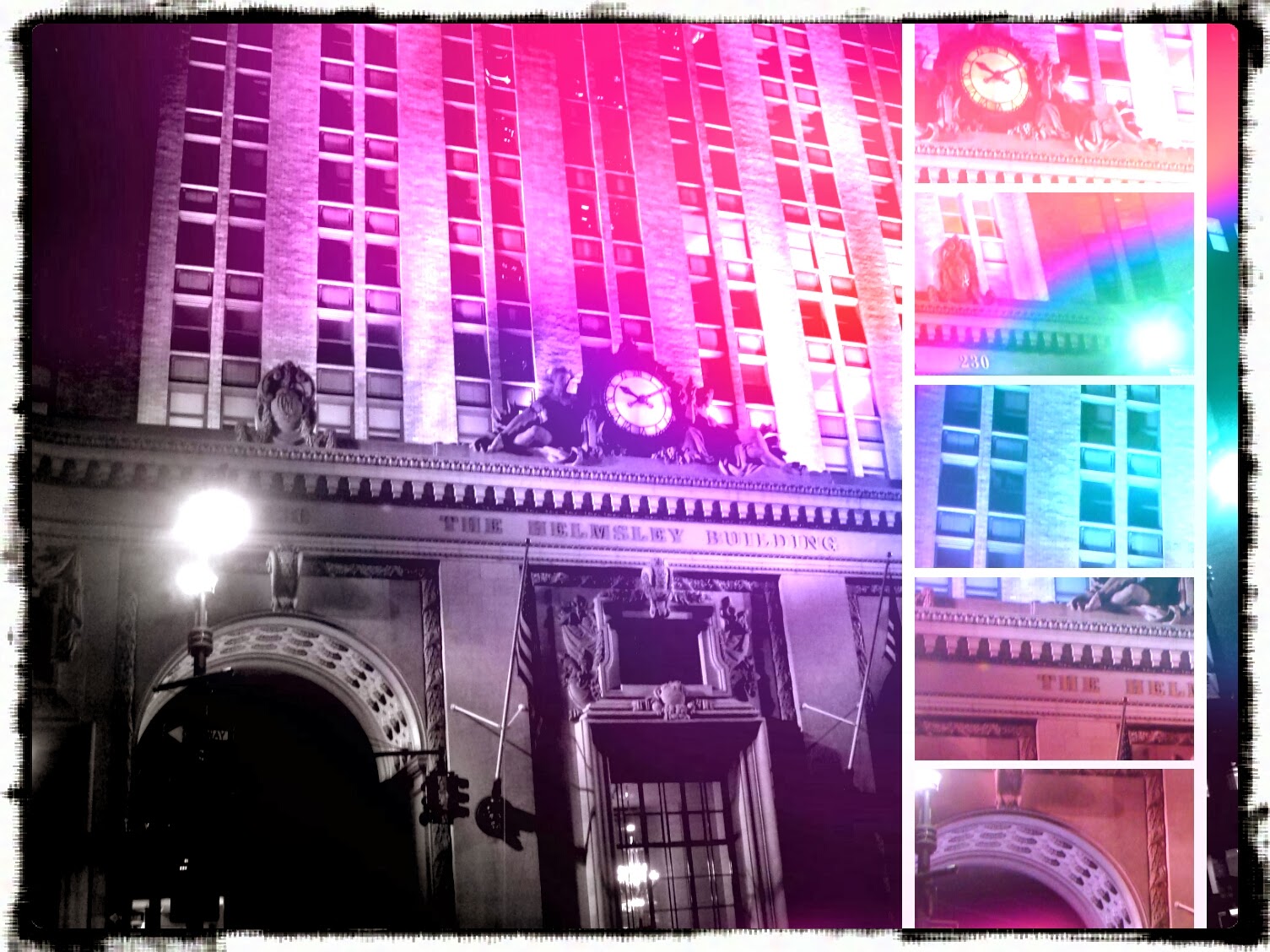 But for seeing NYC from above we chose the Empire State Building - like Cary Grant says in An Affair to Remember : "It is the closest point to heaven there is in New York".
Well - to be honest our 32 $ climbing to its 86th floor didn't leave much of the bliss of heaven: the view surely is stunning but it was incredibly crowded, so you really had to fight in order to get close to the glass and snap the pictures. 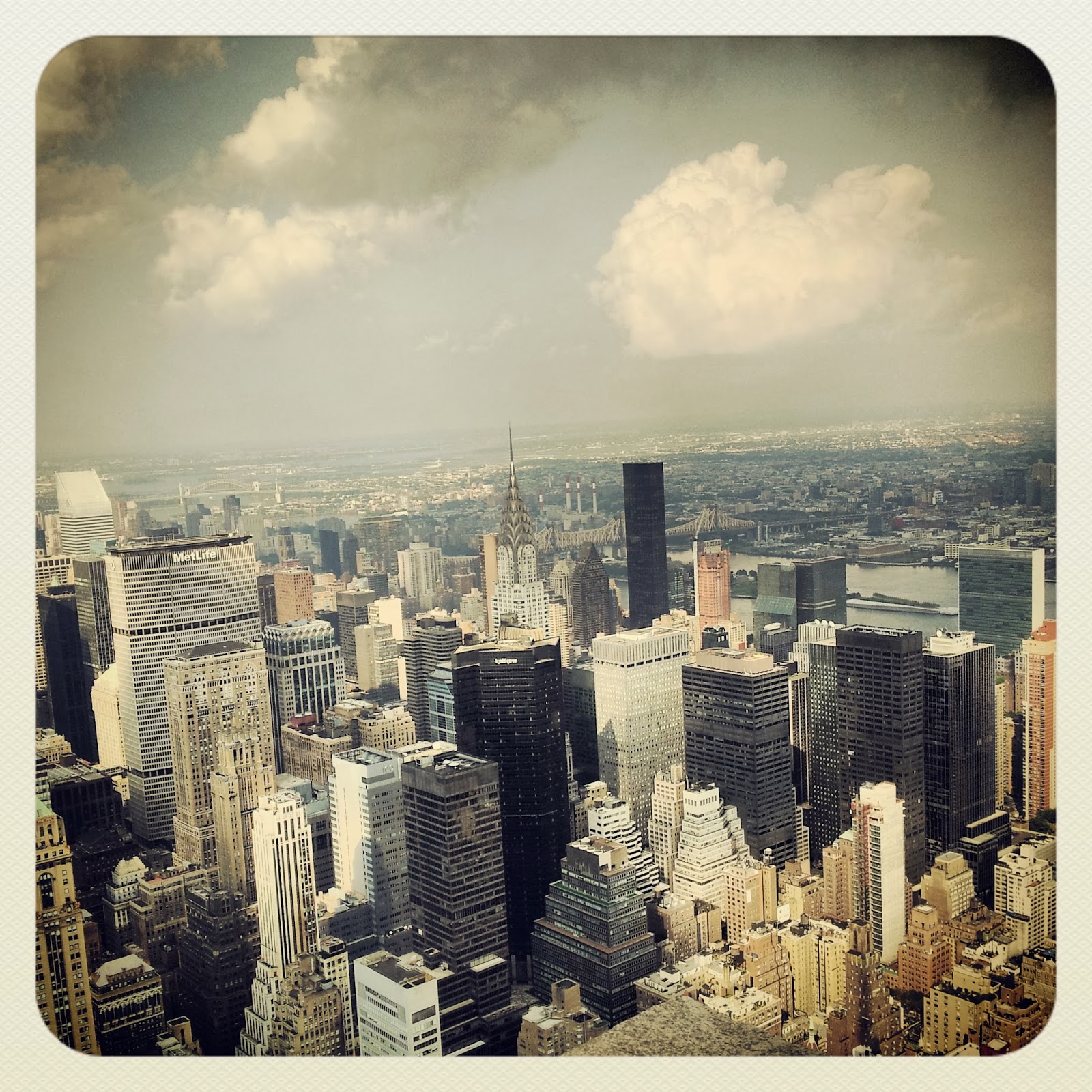 Tabby Cat also went on the Top of the Rock on her previous visit to NYC and says that she enjoyed it more - and that it was fair less crowded. 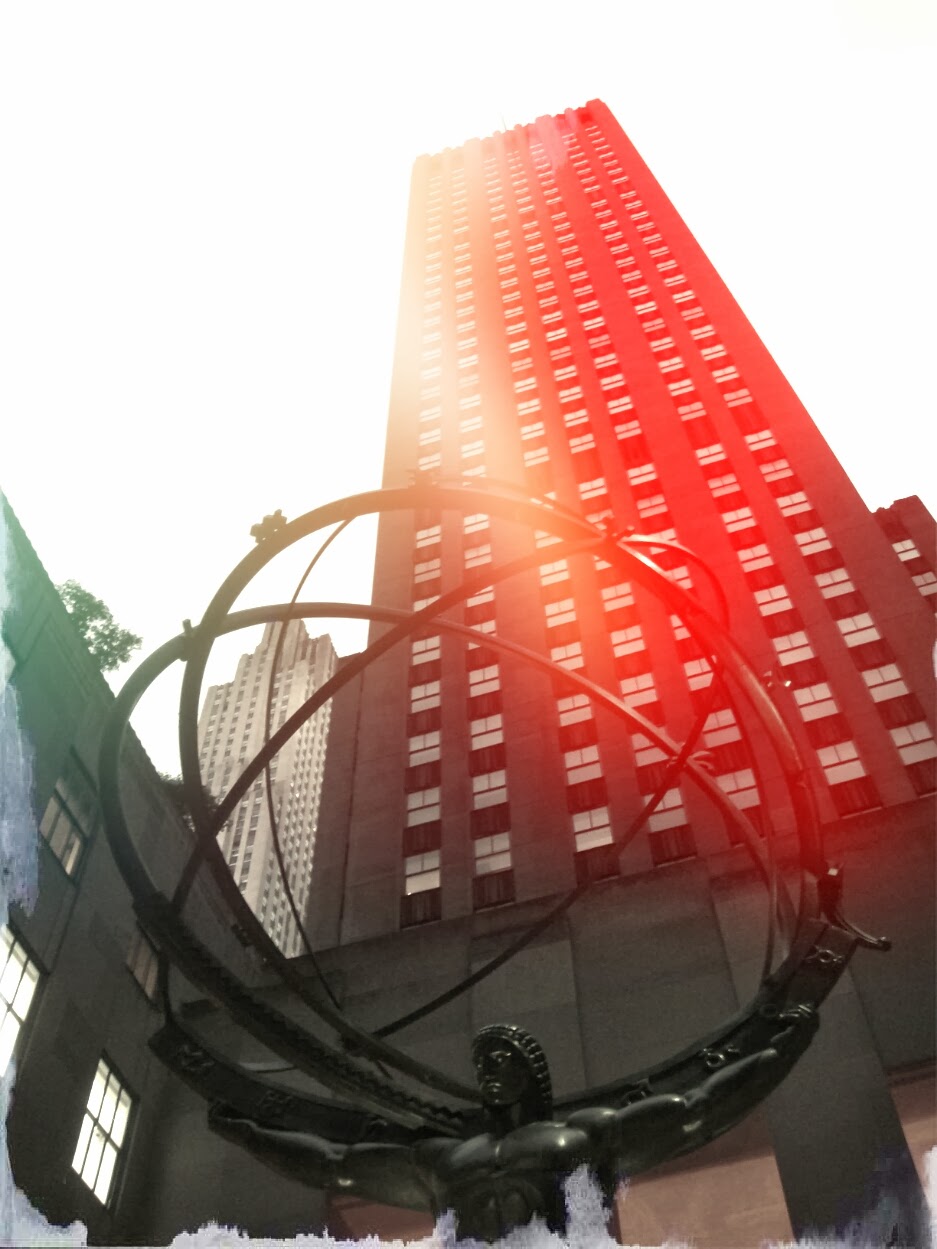 Another thing that is different from what we did but that I'd recommend is trying to go up there at sunset: I bet the stunning view would be even more stunning.
In any case I'd say it's quicker if you book your ticket on line: there is a 2 USD fee for this, but in my opinion it's worth to spare yourself from a really huge queue.
Before taking the elevator that will bring you up to the 86th floor terrace, you will do a short guided route through photos and texts that will illustrate you the history of the building. 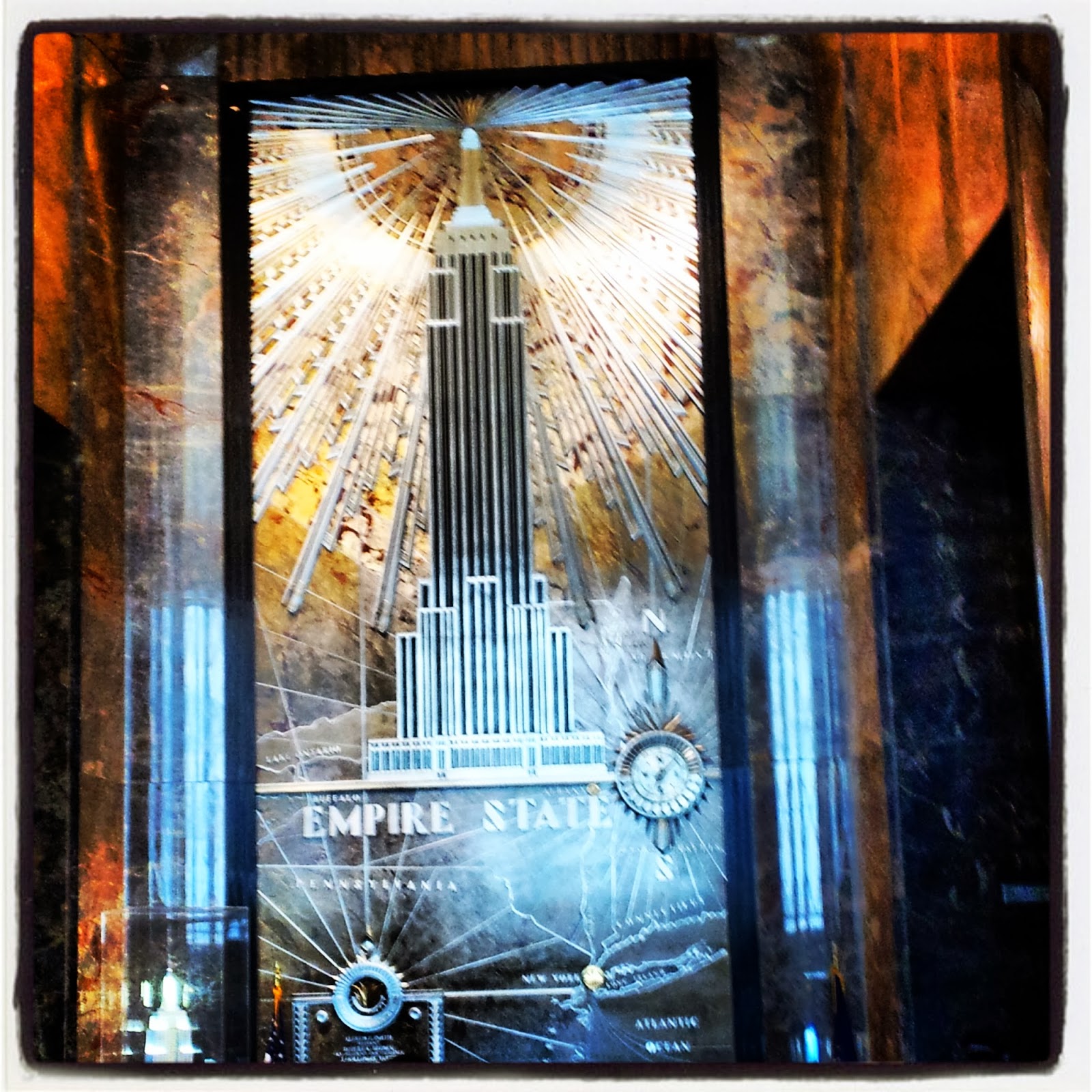 Empire IS the diva in New York's skyline: it's not the tallest anymore (since eons), but it probably is the most iconic - in fact it's been the one which King Kong chose to kidnap the poor blondie, in the most famous cinematographic metaphor of nature vs civilization clash.
Did you know that it only took a little more than 400 days to build it?
Did you know that the colorful lights that shine on its top change according to the season and to some special events? They get pink and red on Valentine's Day, green on St. Patrick's, green and red during Christmas time, and so on.
Did you know that its very long antenna was originally supposed to be a point where "parking" airships?
Empire State of mind indeed!