Québec City - The best part of France in Canada

Québec City (alas, Ville de Québec!) is one of those places that make you feel like you are stepping straightly into a fairytale, with its cobbled narrow streets and its old trellis houses.
It's definitely the Canadian city I've found most charming among those I've visited.
It reminds me of some places I've seen in Normandy, but it's not really similar to something specifical - it has its own well defined personality.


People from Québec are very proud of their French roots: the official motto of the state is "Je me souviens" (I remember) - which is meant to work as a sort of recall for their history and origins. After all Canada is a member of the British Commonwealth, and history tells that the French part of it has been subdued to English after quite some battles - therefore they still care a lot for keeping alive their culture and identity.
Canada is a bilingual country, so they are supposed to speak English too in every part of it; but in Québec they really prefer if you talk to them in French.
And some elderly people (for example an awesome City Guide I've met who looked like Clint Eastwood - and who totally rocked just like him) still recall the battles with the English. No, actually they didn't *live* them themselves - they were not *that* old - but they talk about this part of history in a very vivid and lively way.
[which has made me feel slightly embarassed between myself and I for having chosen to wear a Union Jack tee that day *ahem* - I swear I came with pacific intentions!!]

French of Québec is a bit different from French of France, by the way.
They use some words that in France are considered almost arcaic; plus, for what concerns the most recent concepts, they don't use the French version but they have French-ized the English term for it (eg. if you order to drink in a restaurant they don't ask you about "boissons", as they would do in France, but "beverages" - pronounced at the French way).

But let's start exploring the city!
The most interesting sight I've experienced and that I can recommend are all in the Old Town.
You can start from the Lower Part and in particular with the Parliament Building, which, besides being pretty, includes in its facade and in its nearbies many references and symbols to the history of Québec - with a plate containing the explanation of the "Je me souviens" motto and a pantheon of statues of the most remarkable local historic figures. 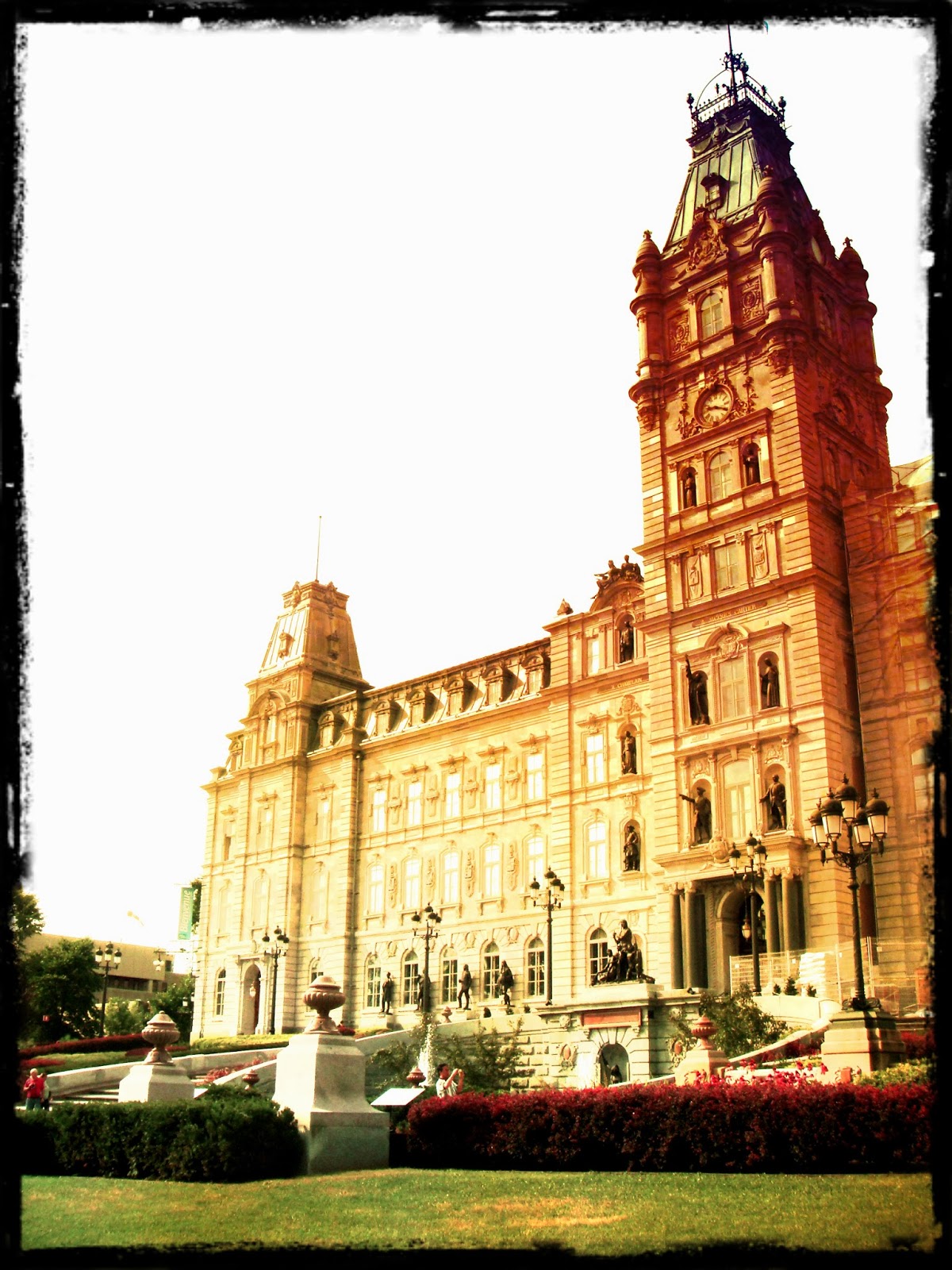 In the nearbies of the Parliament there is also an Inuksuk, as a tribute/memorial to the Inuit people, who were actually the very first inhabitants of Northern Canada. Not sure if they were actually living in Québec as well - but anyway this is a sort of homage to them.
The Inuksuk is a sort of landmark, made of stones, which represents a human figure. 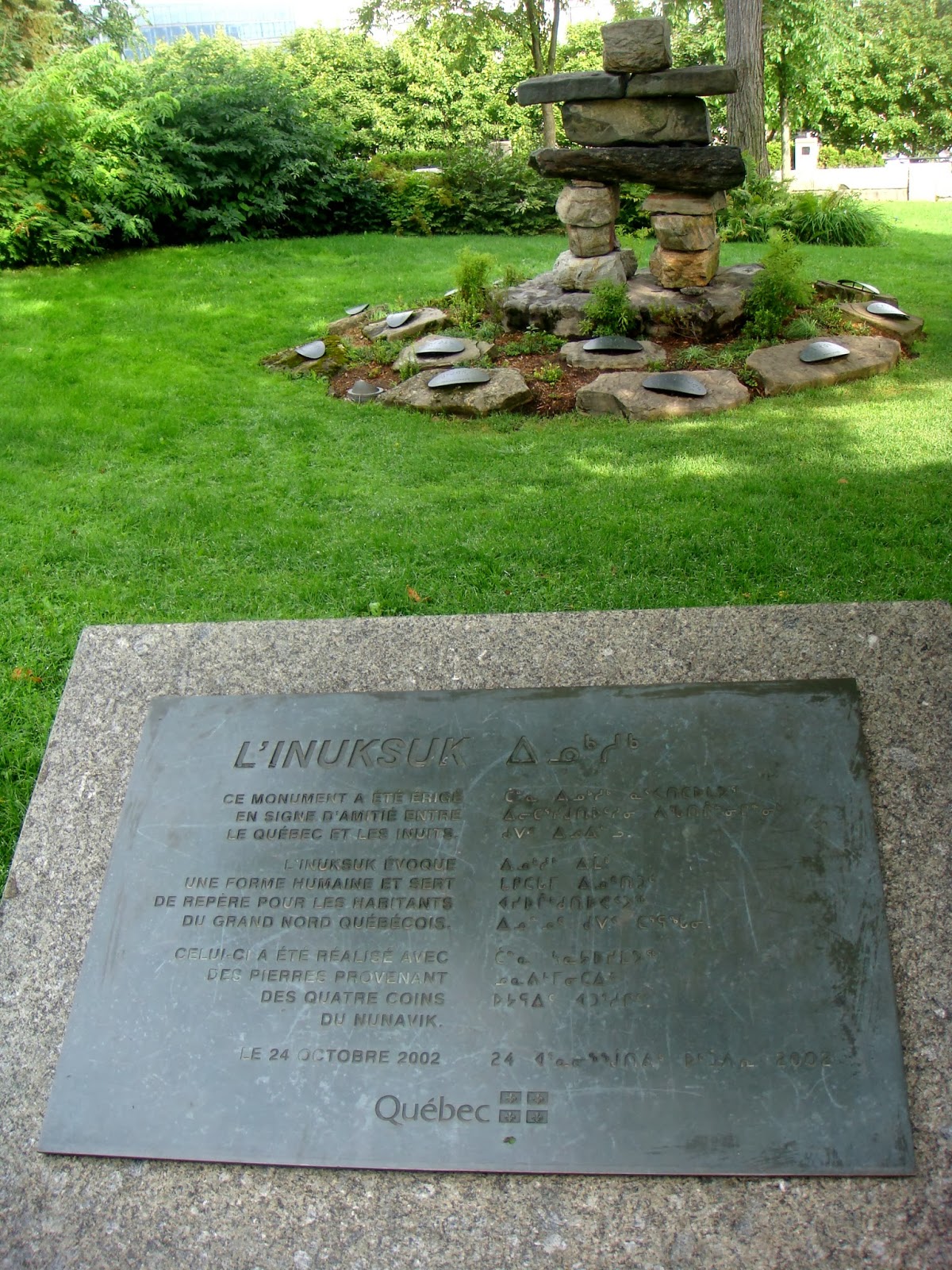 The rest of the Old Town is built on the promontory which has been called Cap Diamant - because French explorer Jacques Cartier who first settled in this area thought it was sheltering diamonds. I'm not sure whether he is relative with the other more famous Cartier of the jewellery; but call it a sign of destiny ;)
Lower Town and Upper Town are connected with either a funicular or with a staircase which steps are called "casse cou" (literally "neck breaking", because they are very steep).
Even if I'm a cat I'm not lazy, so I've enjoyed climbing the steps; but if you prefer choosing the funicular I guess it should provide an interesting view of the Old Town.

On the top of Cap Diamand there is Chateau Frontenac, which is the most visible and famous landmark of the city.
It's actually a grand hotel, and it had been built and designed already with this purpose; but it gives such a majestic impression that it can be easily mistaken for a real castle or something like that. 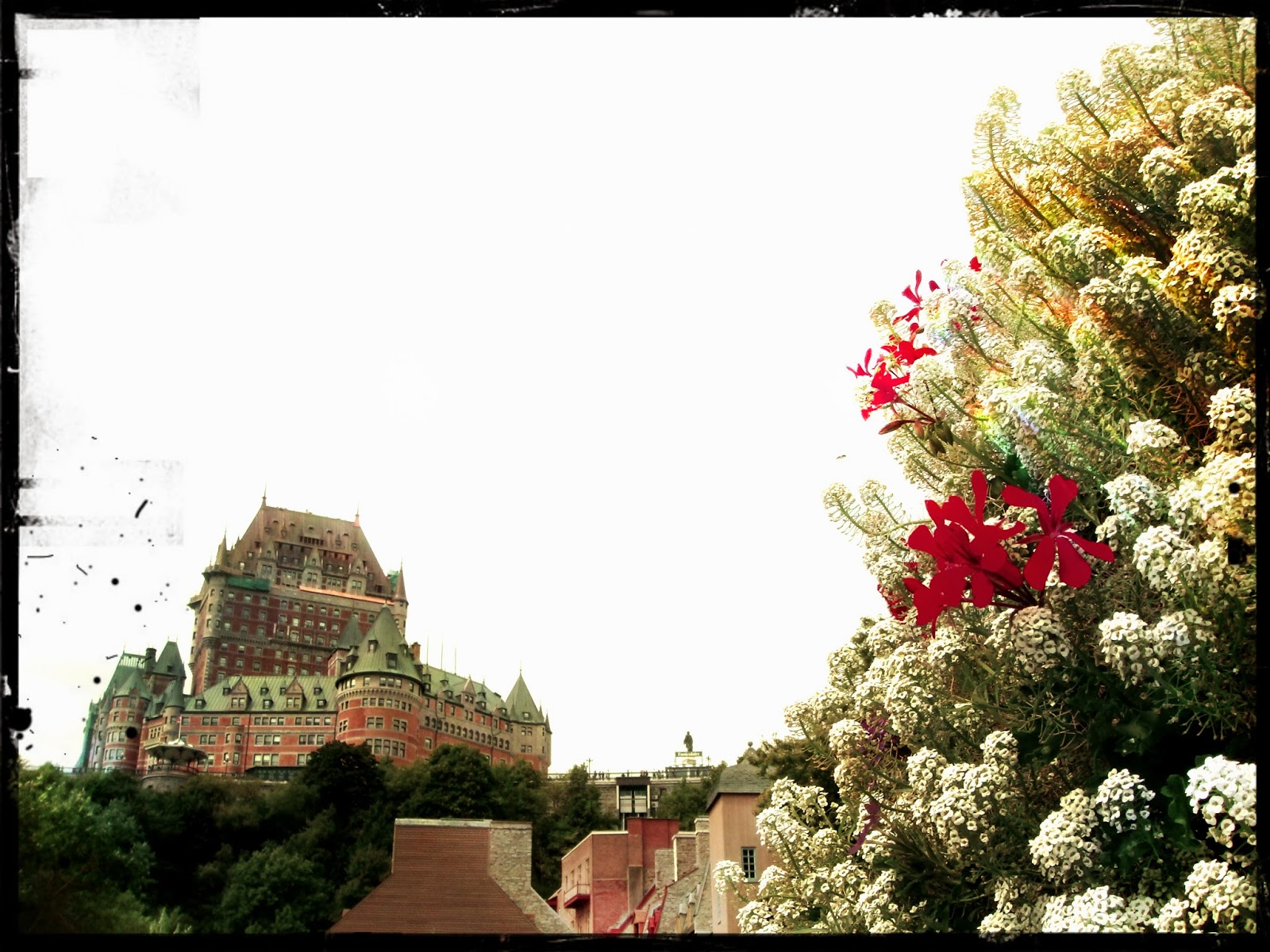 The Upper Town is the only North American city which still has a fortification: you can still see its citadel and the rampants which preserve the structure they had in XVIIth century.
All in all the Old Town area has been declated UNESCO World Heritage Site.
Just take your time strolling around in the alleys and enjoy the pretty corners you can see. 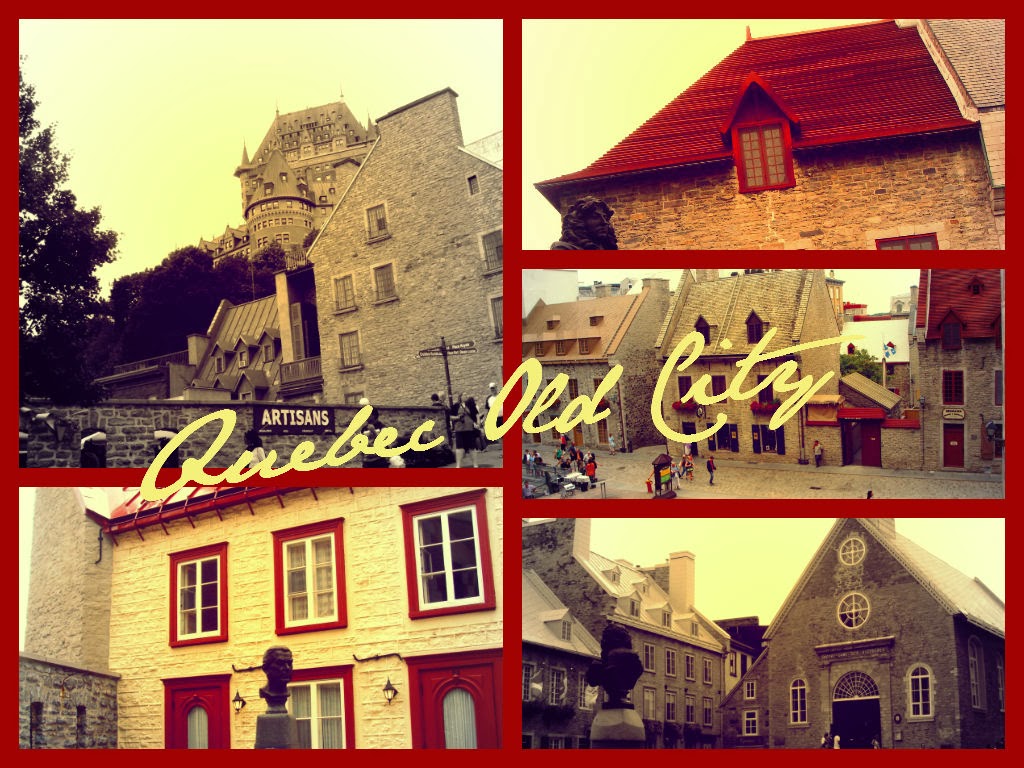 Of course there are also many nice shops, with hand-crafted goods, medioeval stuff and sovenirs. 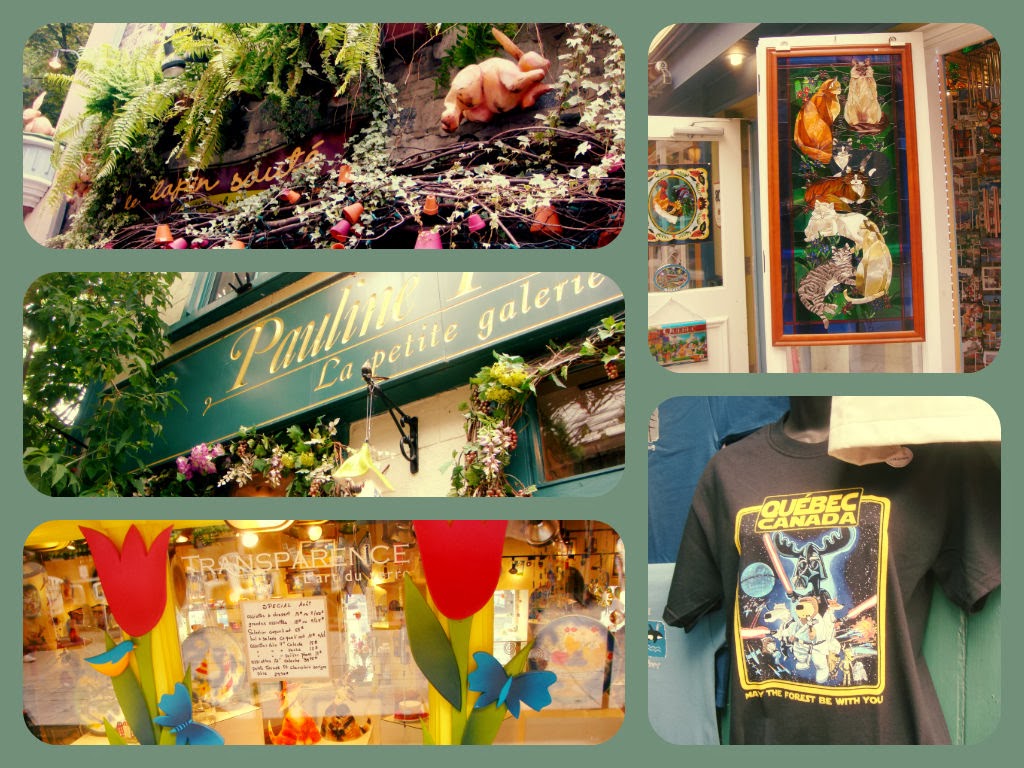 After having walked around the whole day, you can sit down and relax in some bistros or restaurant, with a glass of wine and some French-like dishes.
Actually the Quebec food speciality is poutine, but I must confess I didn't dare to taste it. Ok, shame on me.
It is mainly served in cantines, kiosks or pubs, and it consists of French fries topped with brown gravy and cheese curds.

Saint-Roch quarter is also a nice area: the buildings are quite peculiar and there are interesting shops here as well. Less crafts and more fashion, let's say. 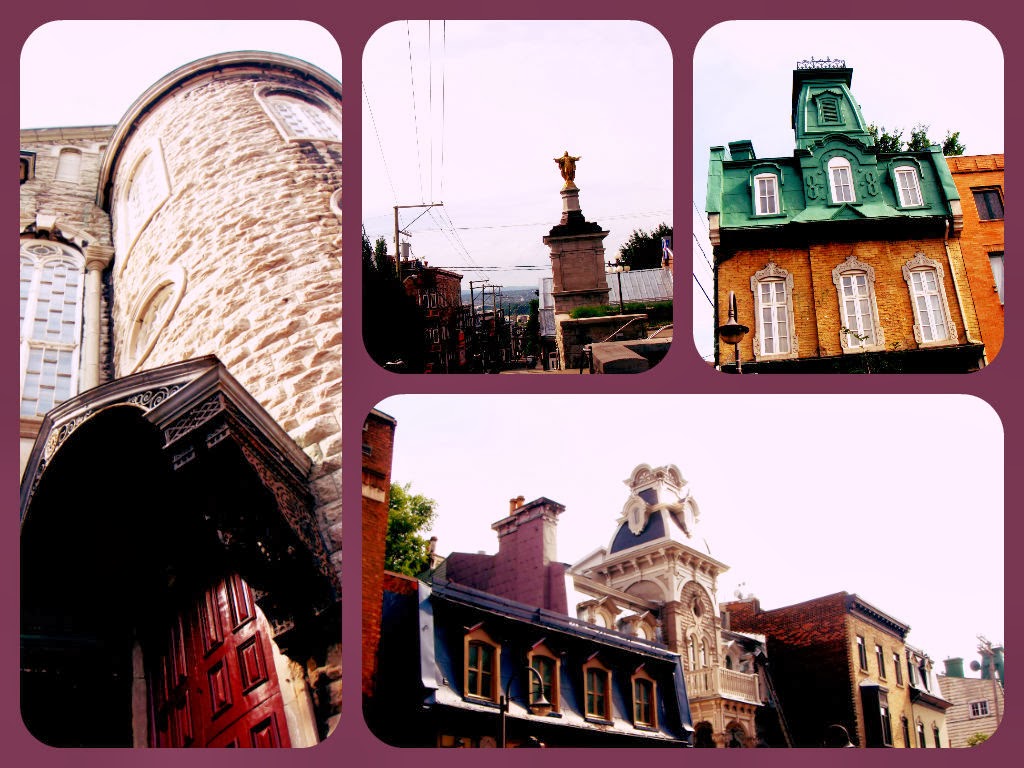 ...and then here we cats can get a special treatment ;)
For cats only!! 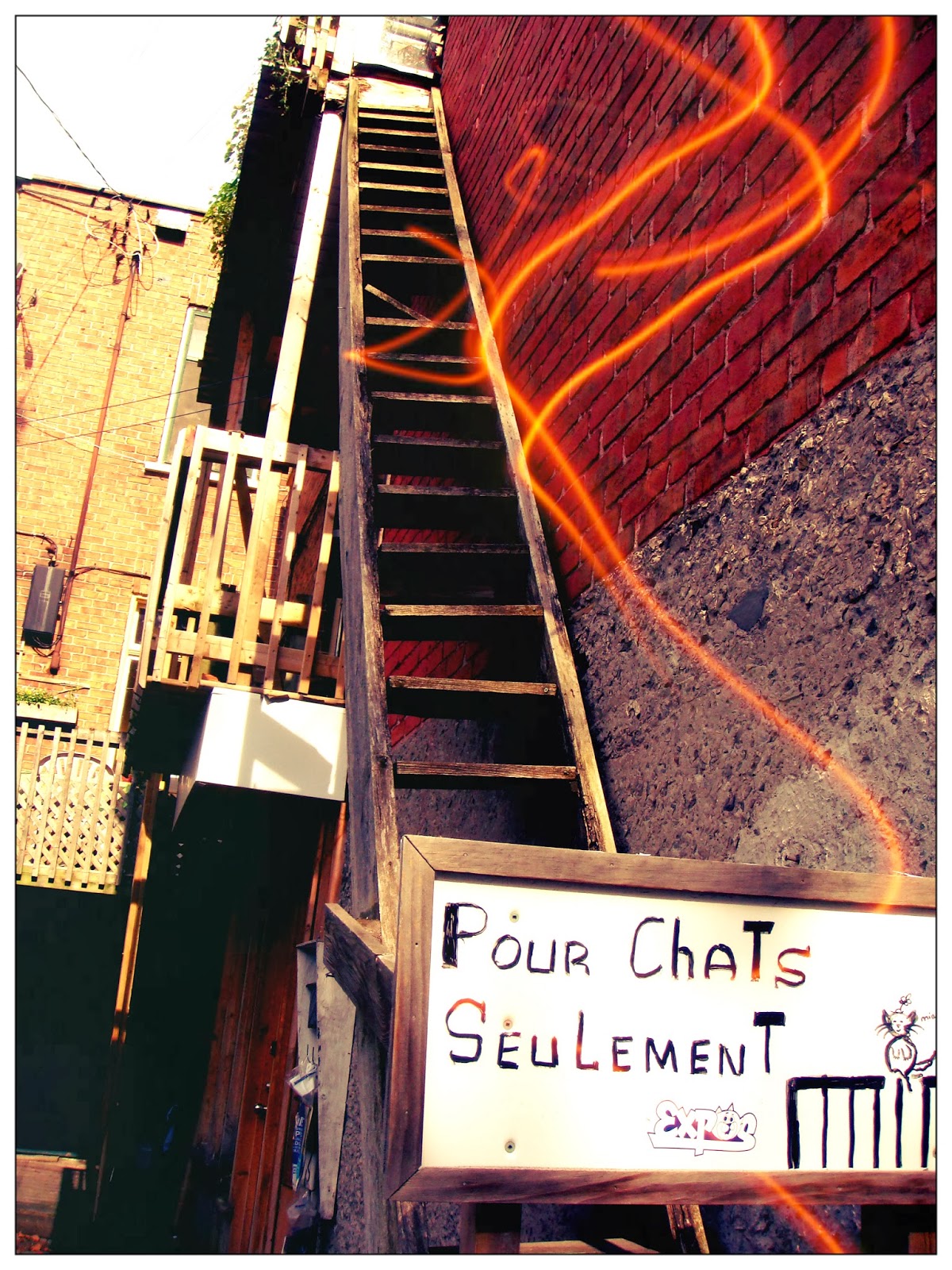