While visiting Toronto, you just can't avoid paying a visit also to the nearby most famous attraction, Niagara Falls. And so we did.
The Falls are one of those places that are somehow iconic in everybody's mind, and you can't help picturing them already in your imagination before having actually seen them. Such mental trips risk to lead to a certain degree of disappointment - but actually in this case I hadn't grown too many expectations about them, I was just really curious to see live this famous and amazing natural landmark.
And yes - they were different from what I was expecting.
I was picturing them taller and larger. But alas, I cannot say they were disappointing, because they still were impressive enough to see, expecially when reaching the bottom of it by boat. It's just breathtaking to witness the power of the mass of water, looking at it closeby.


The Falls are actually three and they are located at the exact natural border between USA (New York State) and Canada (Ontario). 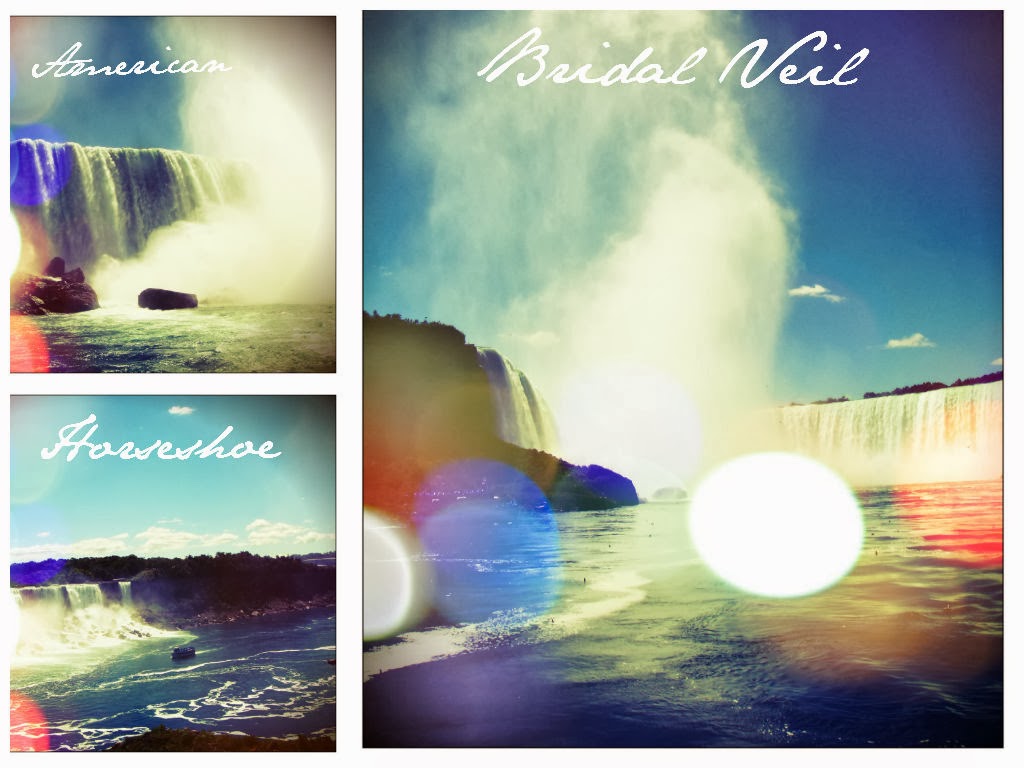 The Maid of Mist boat cruise operates regularly from the docks both on Canadian and American sides and carries you into the rapids immediately below the falls - which is impressive to see.
You have to do a quite long (but relatively quick) queue and they give you a plastic raincoat with the boat logo to wear during the cruise that then you can keep as a memory. You *have* to wear it, because approaching the falls is like being under a rainy storm. Expecially when reaching that very tall column of water steam you seen in the picture above.
The raincoats are blue and make the visitors in queue look like an army of Smurfs ;) 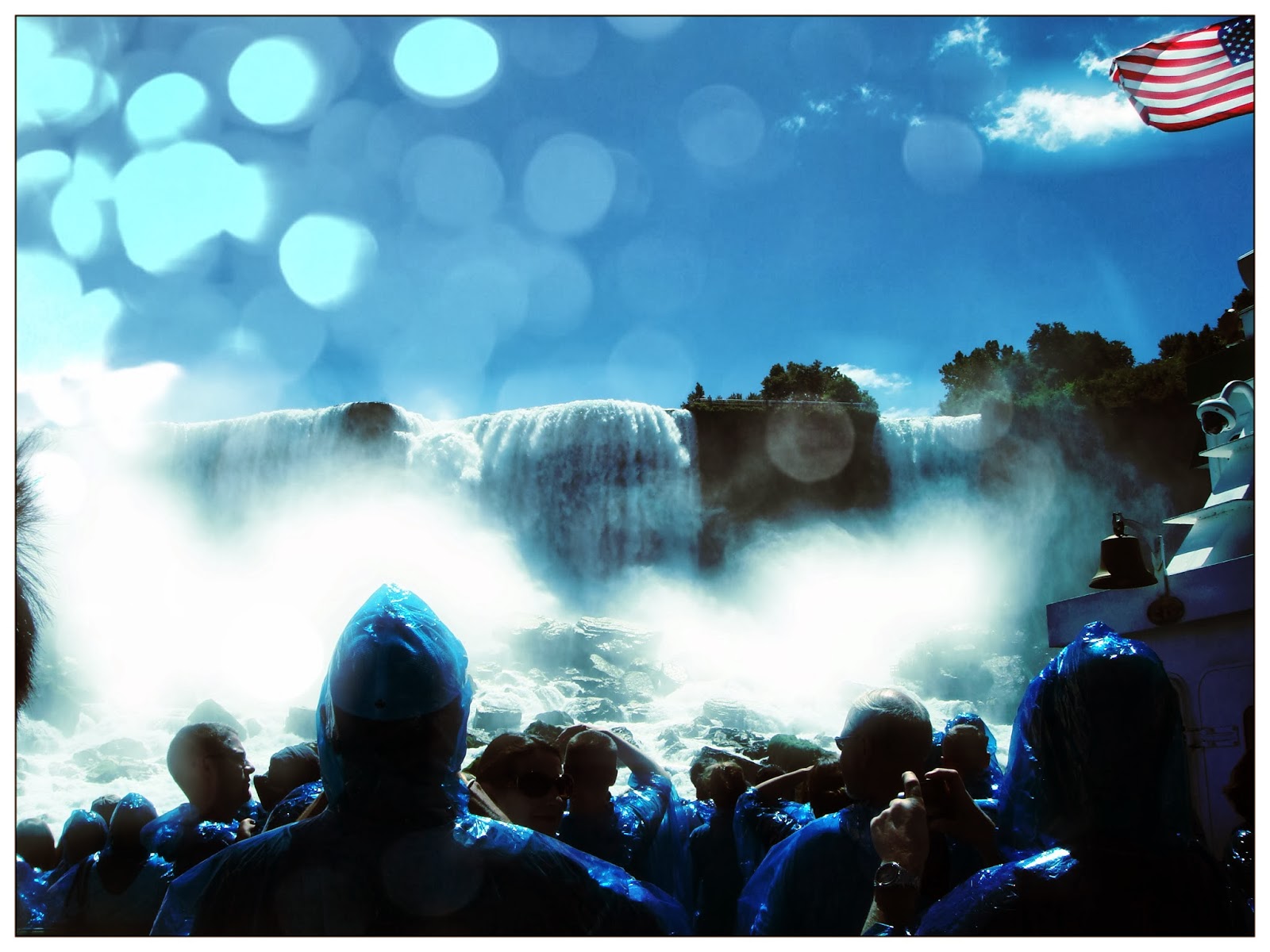 The city (town?) of Niagara Falls has obviously become very touristic and is mostly made of mainstream attractions such as casinos, bowlings and fast foods.

The nearby town of Niagara-on-the-Lake is completely different.
It's a small and cosy village in Old England style, with white wooden and cute buildings and colourful flowers everywhere. 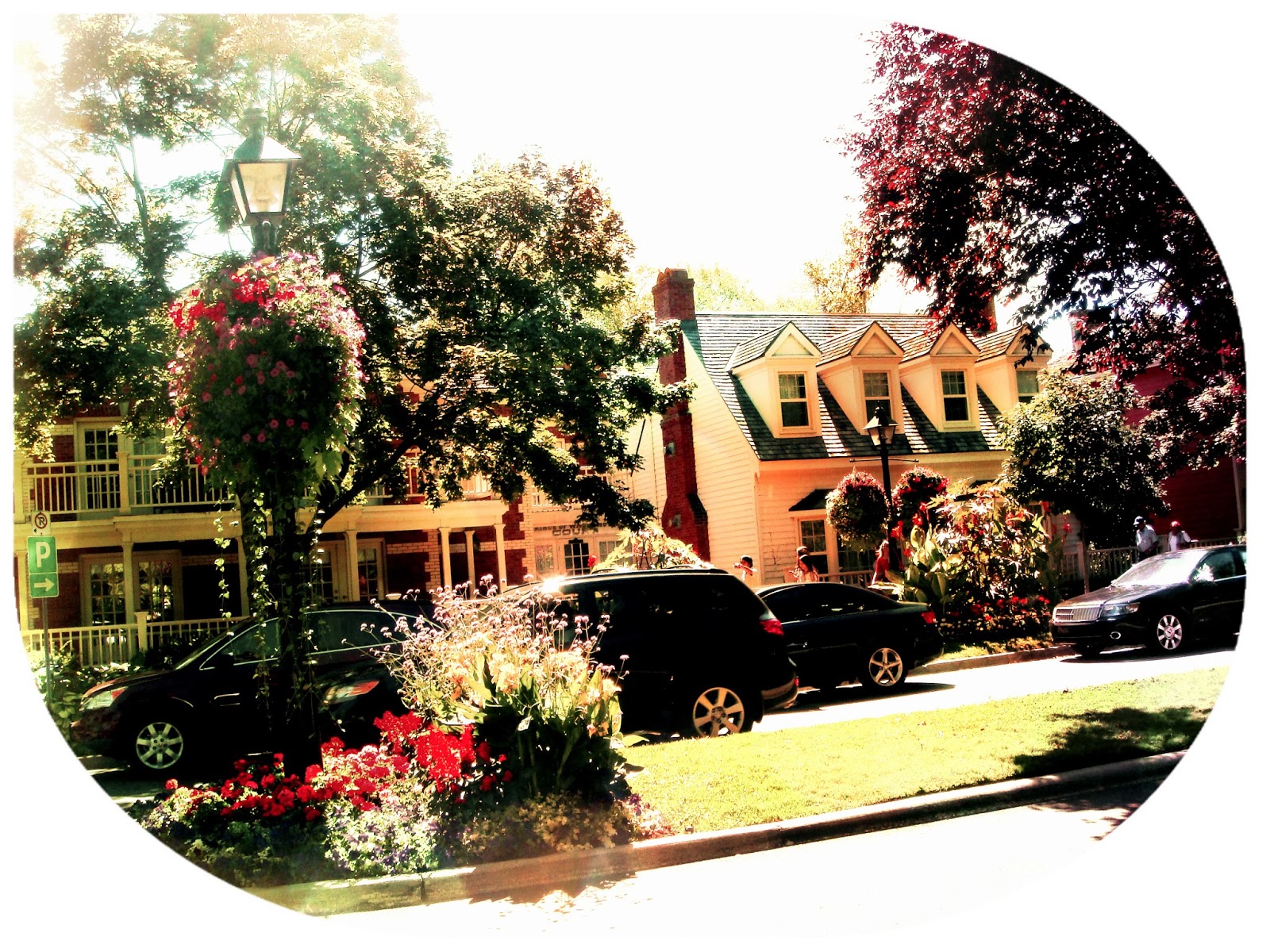 It's so neat and tidy that at first I had suspected that it was a fake touristic attraction as well; but it actually is a colonial village built at the end of 18th century and very well preserved. 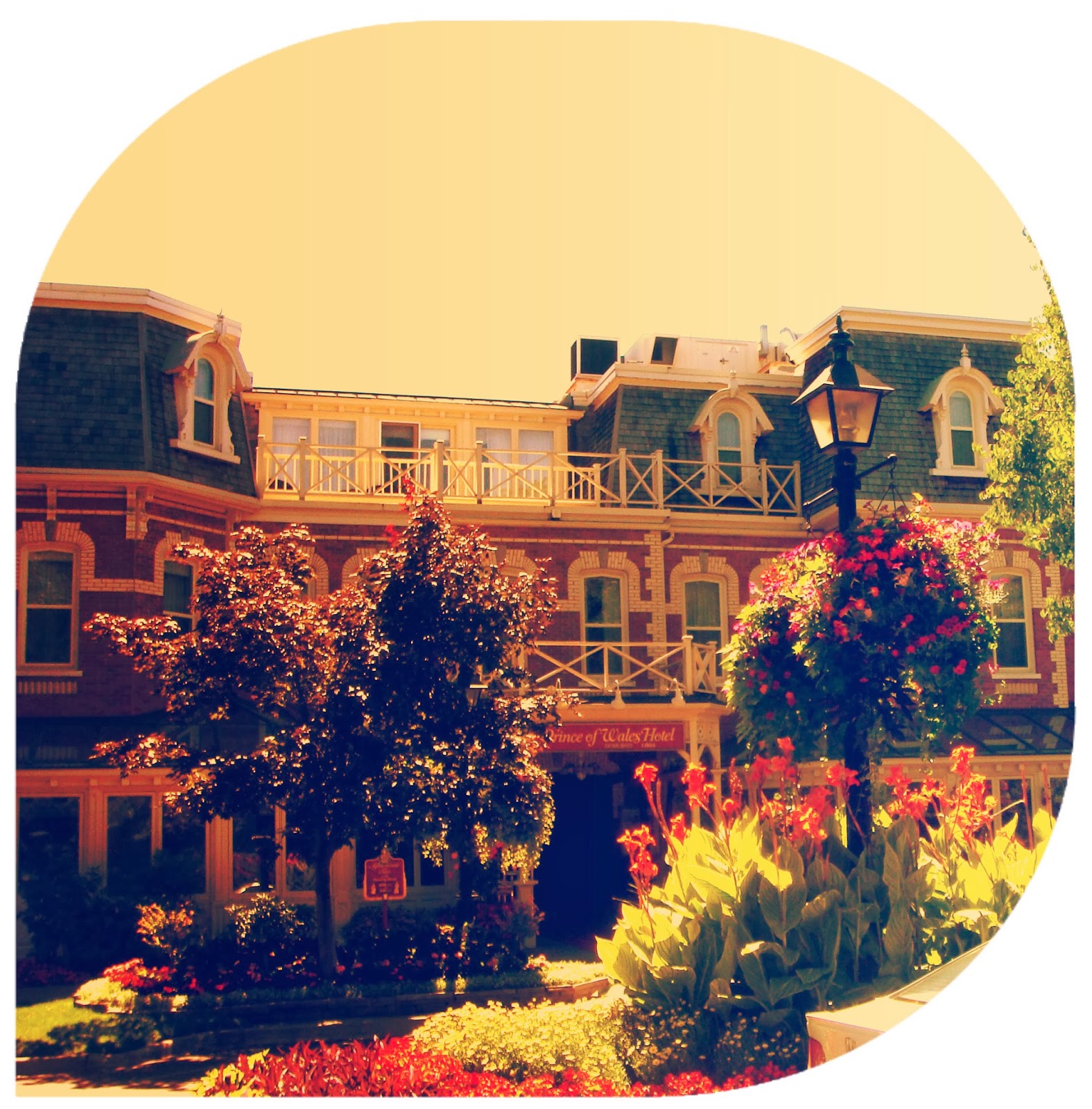 The atmospheare you breathe here is very British - and it's a very fond Britaholic telling you this.
Shops are totally worth a look as well, and also what they sell has a Brit taste, from crafts to sweets and knick-knacks (obviously including some versions of the "Keep calm and carry on" stuff that you just cannot miss - for which I have a soft spot, by the way).
Still it's an interesting contrast to see the little wooden Georgian houses surrounded by American-style choppers and pick-up trucks - there had to be something to remind me I was on the other side of the ocean, besides jet-lag! ;) 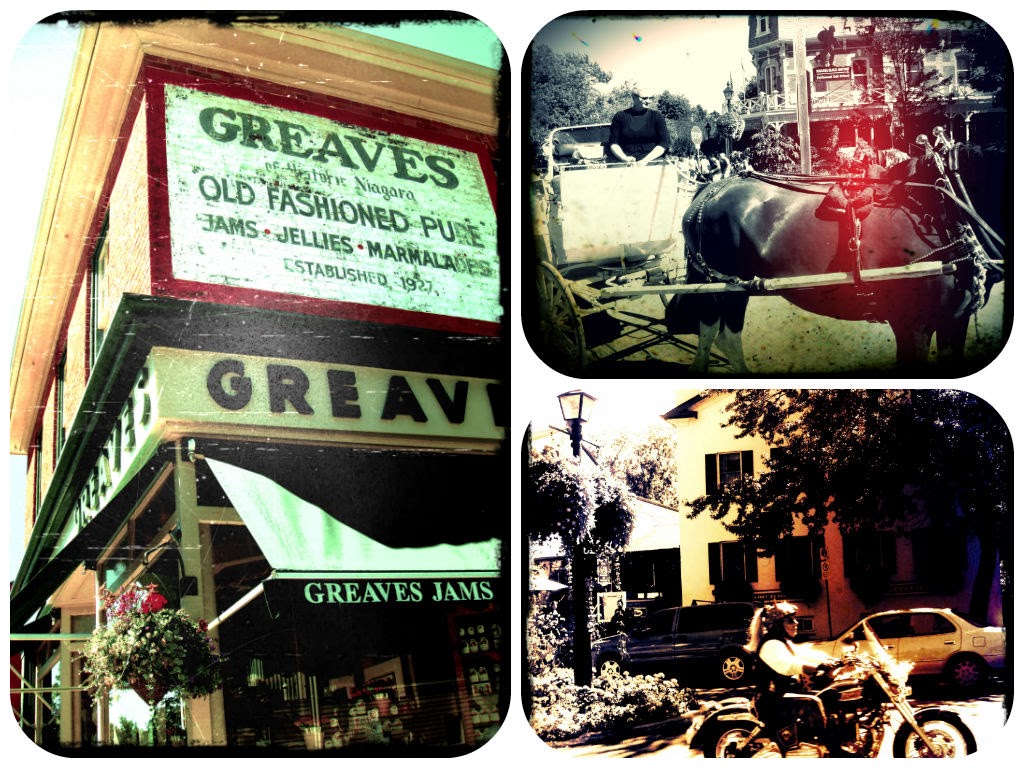 The place you see below is actually a public toilet.
In this town even toilets are cute (and yes, it was perfumed as well) 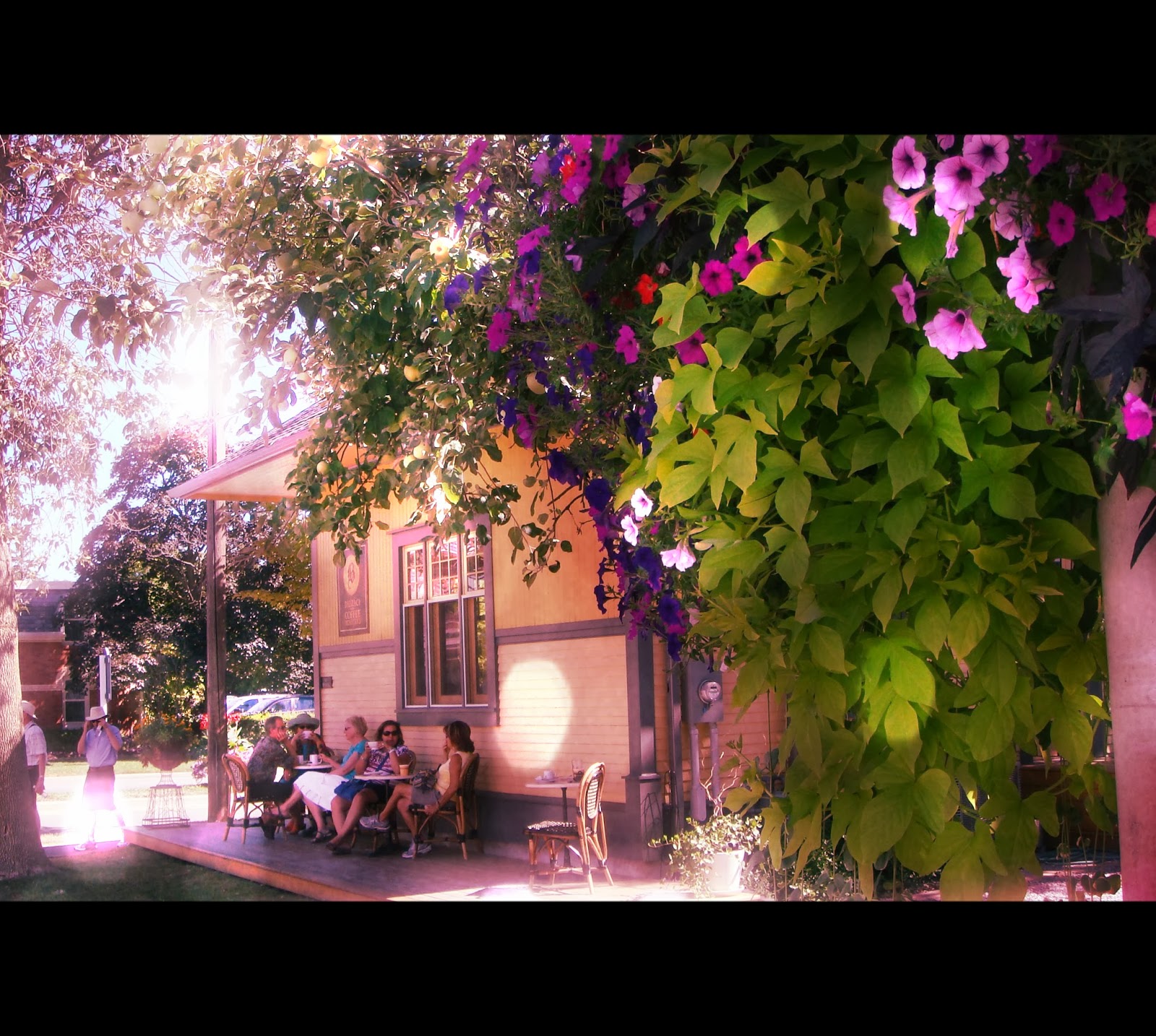