[Down the memory lane] - Easter where you want

In Italy we say "Christmas with family, Easter with whomever you want".
But my personal interpretation of this has always been more like "Easter WHEREVER you want".
I'm a wandering soul and I'd always be willing to pack, not caring about the weather or the seasons; but, since I'm also a cat, I have to confess that extreme cold makes me a bit lazy and more prone for mental trips, made in the warmth of my living room, acrosso the pages of a good a book or through the swirls of a daydream.
So - Easter is somehow my turning point when, thanks to the first holidays batch of the new year and the crispy Spring air that makes you eager of new things and exporations, I usually unlock my suitcase for the first time in the year.
This one is actually a particular year: I've already done the first trip, and the Easter holiday is postponed of one week, with next Sunday's departure for Wales; therefore this Easter is for me an homely one, and, after having stuffed myself with chocolate, now I can dedicate myself to leaf through some memories of my previous Easters, spent travelling... 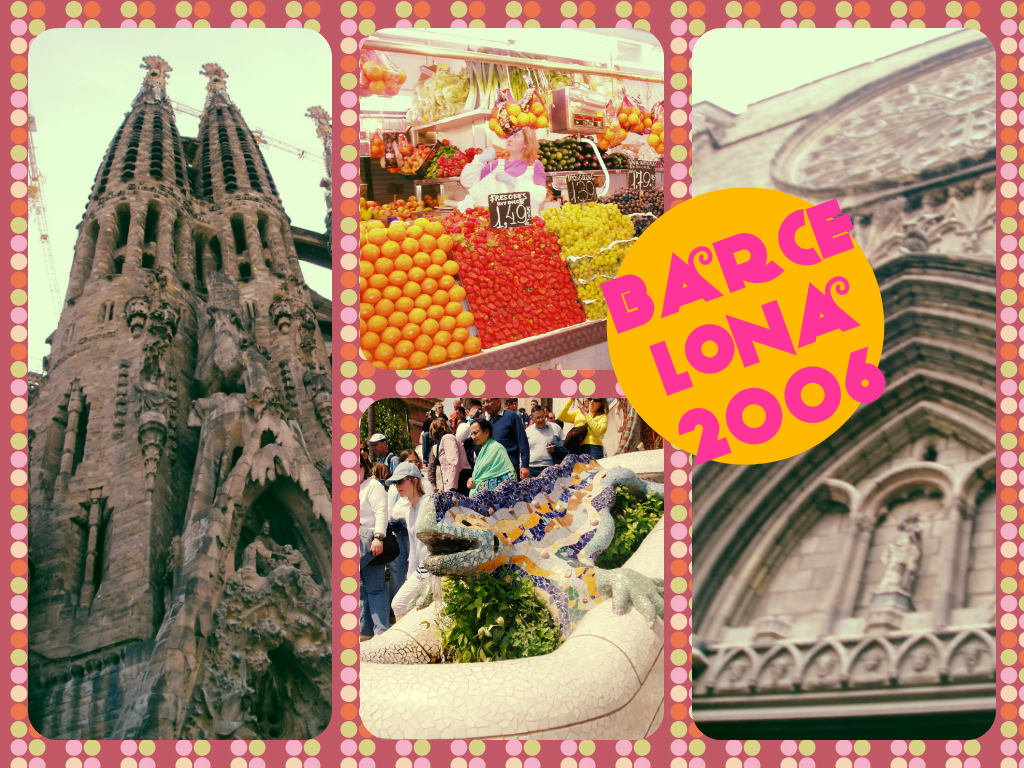 [2006, Barcelona]
If I had to a classification of the places I've visited that have been able to surprise me most, Barcelona would surely occupy one of the very first positions: I hadn't left with much enthusiasm, to be honest, as, from what I had peeked around, maybe a bit shallowly, on the web and from some friends/coworkers' photos, the catalan city didn't seem like my cup of tea; but instead it has been able to sweep me away and involve me as soon as I've stepped on the Ramblas.
I remember that our plane had undergone quite a big delay, and this had made me very whiny and grumpy, because, having just 3 days to spend there, arriving past 6 pm meant losing one of them.
But Barcelona kinda has another lifestyle's timezone, and 6 pm for them is still early afternoon: they go on no-stop, until late at night, everyone, adults and children, younger and elderlies; streets are lively and staying up till very late is perfectly normal.
Without even getting aware of it, we ended up dinind at midnight - which is something completely out of my system but totally aligned with the local lifestyle. Immediate osmosis!
And, in general, the whole holiday has been out of my system: perhaps it's true, actually, that Barcelona is not "my" cup of tea; but it's been incredibly good at finding another kind of tea completely new to me, but that I've loved, nonetheless. And it's been a sort of different and regenerating trip.
Barcelona has a very strong energy, and, if it were a color, it would certainly be orange: you can feel it walking among the sounds and the vitality of the Ramblas; you can see it in Gaudì's works, painted with the colors of the sea and curvy like waves, spread along the city like precious seashells on a beach; you can taste it at the Boqueria market, where fruit is like a piece of art; and, finally, you can smell it along the sea, in the open Barceloneta beaches, where, maybe, you can gather where it comes from.
And then there is the incomplete masterpiece of the Sagrada Familia, which looks like a castle built by kids on the sea shore, straining wet sans, but so rich in details and particulars to seem to mirror in the stone a whole, great life.
And then there is the Barrio Gotico, the medieval quarter, where Barcelona changes face and color, shows its shadow's side, deep and reflective, with some unconfessed secret.
Last day we spent there was April 23rd, San Jordi's day, Catalunya patron: tradition from this day wants to give a rose to women and a book to men.
Well, I sometimes happen to think that perhaps it was better if I was born a man... 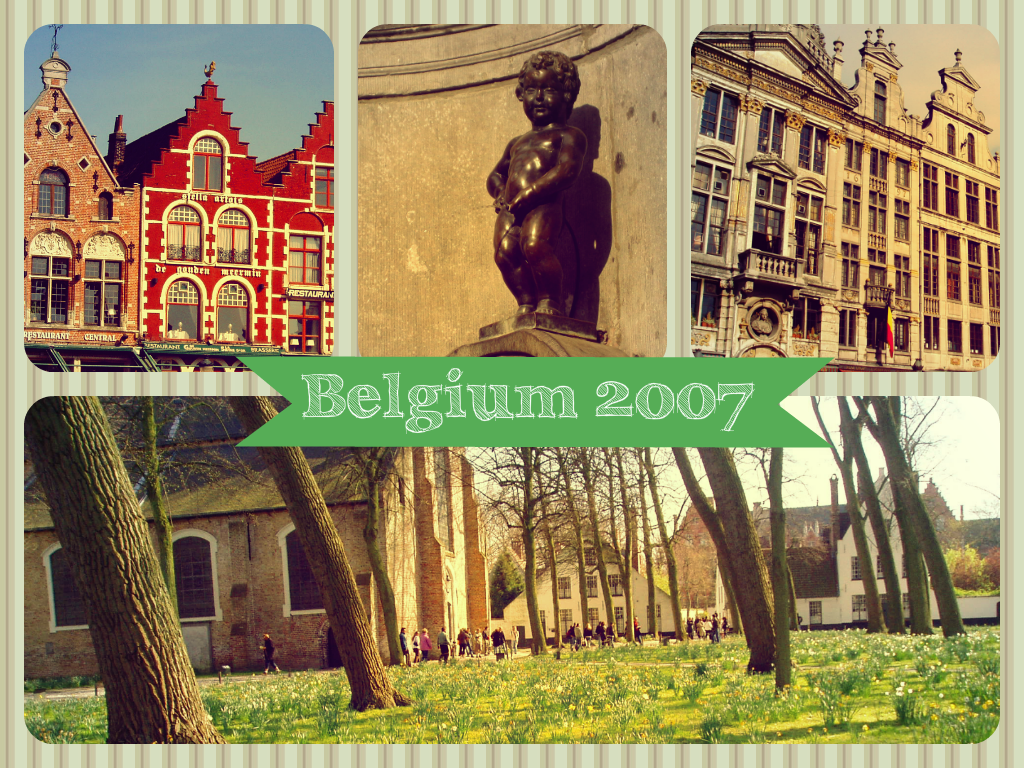 [2007, Belgium]
Spending Easter in Belgium also means dipping your finger in a chocolate fountain inside one of the historical chocolateries of Bruxelles.
It should have been a biscuit, actually, but I've used my finger: I've neve done a "100 things I want to do before growing old" list, but, if I had one, this thing would surely have been there since my early childhood.
This time I just *knew* I would have fallen in love with my destination - THIS kind of places are my cup of tea.
Houses facades are slim, narrow and curly, they appear, tall and a bit menacing, on the squares, almost as if they wanted to frown at them, judging what is happening there.
But the buildings that are observing the Grand Place square are a masterpiece of curls, of flemish architecture and gothic.
Manneken Pis must be a relative of Copenaghen's Little Mermaid, because, being an icon, your imagination ends up nurturing a certain expectation towards it, and therefore it ends up being a bit disappointed when it finds it hidden in a corner.
They change his clothes every day in order to celebrate something, since much before that Google invented the doodle thing - but for Easter he was naturally naked, so the picture you see above is almost a sort of rarity.
But my best memory of this trip has undoubtly been Bruges, that, with its canals and its medieval buildings, is one of those places where time stops, but without freezing: there is not something artificial or fake about it, on the contrary, it's actually peaceful and harmonic.
And the peace you can breathe at the park around the Beguinage, with its incredibly green grass, its daffodils waving at the Spring's breeze and the crystal blue lake, is almost surreal. 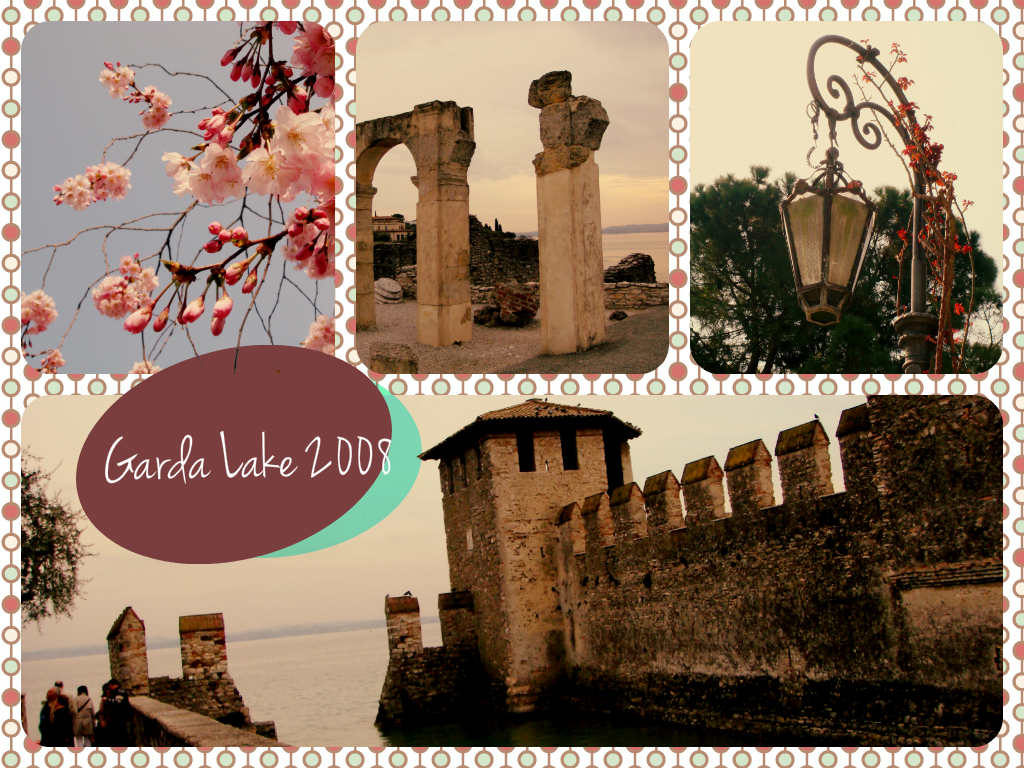 [2008, Garda Lake]
Garda Lake is one of my fave destinations in Northern Italy, not only because it is scattered of interesting little village, worthy by themselves; but also because it represents a strategical position to be able to visit many other Center-North cities travelling conveniently by train.
Padua, Verona and Vicenza are just some examples.
But the Lake itself offers some enchanting views.
The town of Sirmione is one of my favourite places, with its Grotte di Catullo - which literally means "Catullo's caves", but that actually are not caves, but a panoramic promontory where Roman ruins become a perfect frame for contemplating the water's mirror, that, looking so infinite, almost seems like a sea.
And, moreover, at sunset is breathtaking... 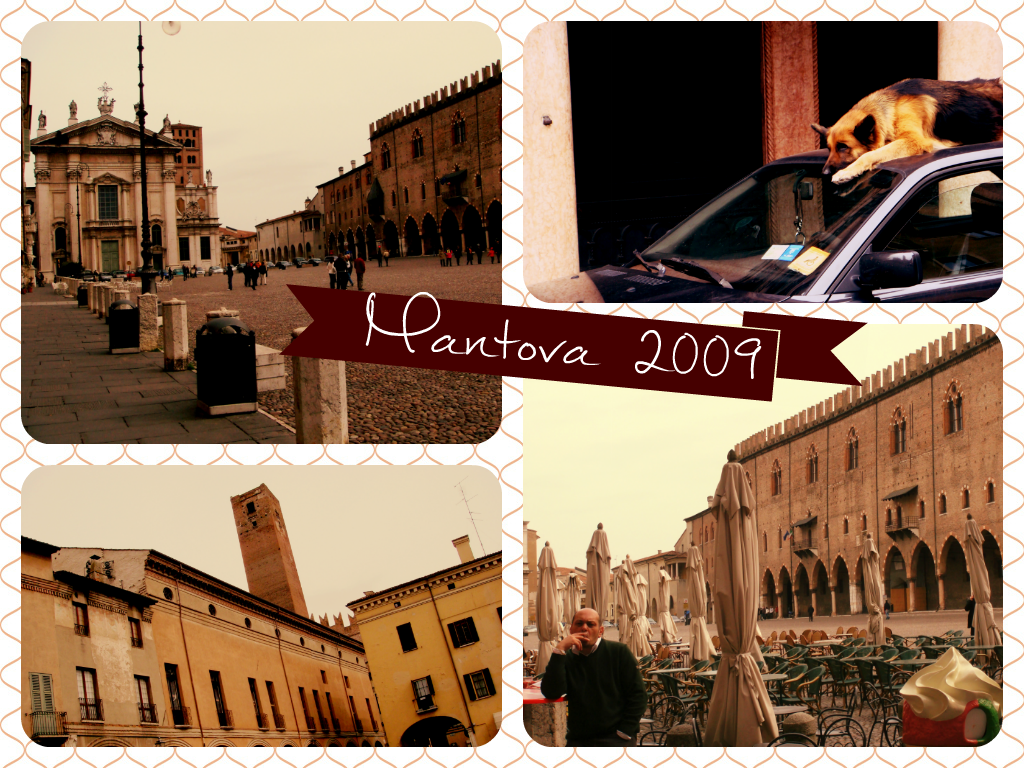 [2009, Mantova]
Middle Ages once again, but with pebbled and airy squares, embattled creamy buildings, hidden churches and courtyards that guards fountains, statues and other art's treasures.
Easter in Mantova had been a bit rainy, but beautiful nonetheless.
It's an artful and cosy city, where I'd want to go back for a more intensive tour with luckier weather conditions.
As for now, I keep the good memory of the pumpkin ravioli, of the almond sbrisolona cake and of this dog, who has a way of his own to ward cars... 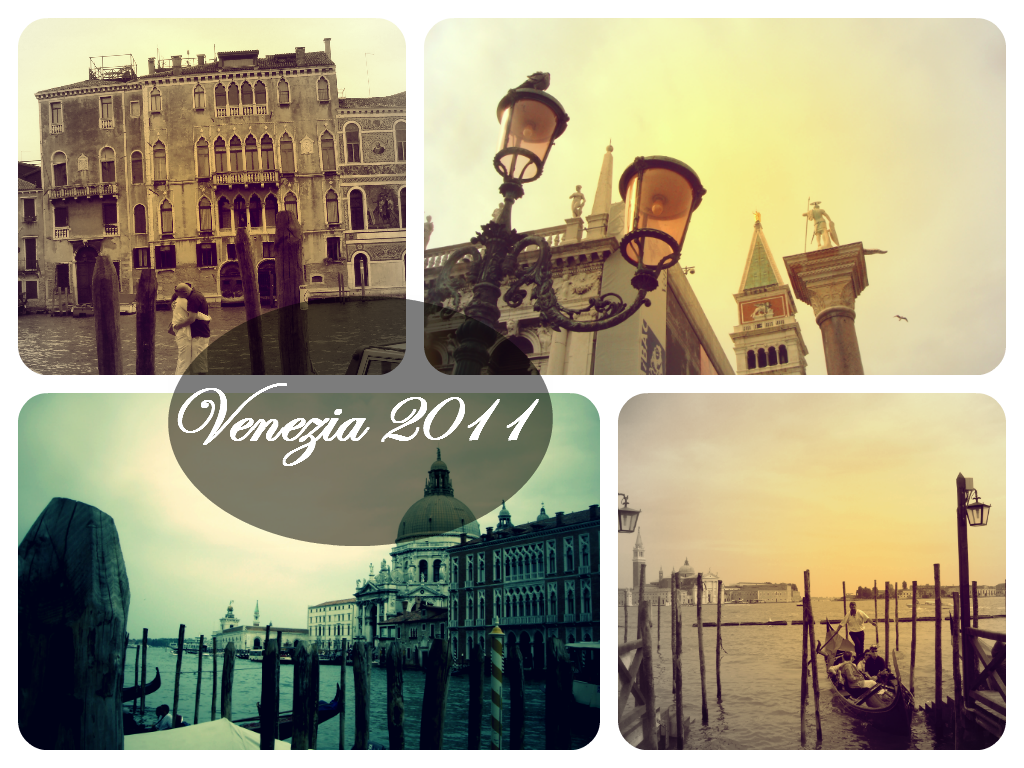 [2011, Venice]
Sometimes, for some strange human paradox, you may travel far away but you forget to explore beautiful things you have near.
Even if I live at less than 4 hours by train from there, in 30 years of my life as a traveller, I had never seen Venice before.
Easter 2011 has been the chance to fill up this gap, which sounds a little bit shameful, also because in Venice I have one of my dearest friends.
Ginger Cat & me swooped out of the blue in the shop where she used to work, wearing some scarves on our heads which, according to our naivy intentions, had to disguise us into some mysterious and posh French tourists. Of course our camouflage has been immediately uncovered - but this hasn't decreased the fun.
Venice is one of those cities you already know before even visiting them, but this doesn't decline its amount of charm at all, nor the enchantment you feel hanging around its calli. And same thing goes for the hoards of tourists which jammed it for Easter, and for the stagnant smell of humidity, which in some points is really intense.
There are no ugly or plain corners in Venice, and, after the first day dedicated to the itinerary of the most classic touristic destinations, it's cool to hang around randomly, getting lost, letting yourself be surprised.
Even the houses with the peeling plaster, ruined by humidity, have their own kind of beauty, unique and decadent, which makes Venice a place with well defined personality, rich but also a bit grumpy and stingy, just like Pantalone, the comedy of art charachter - and not only an affected and well-tidy postcard. 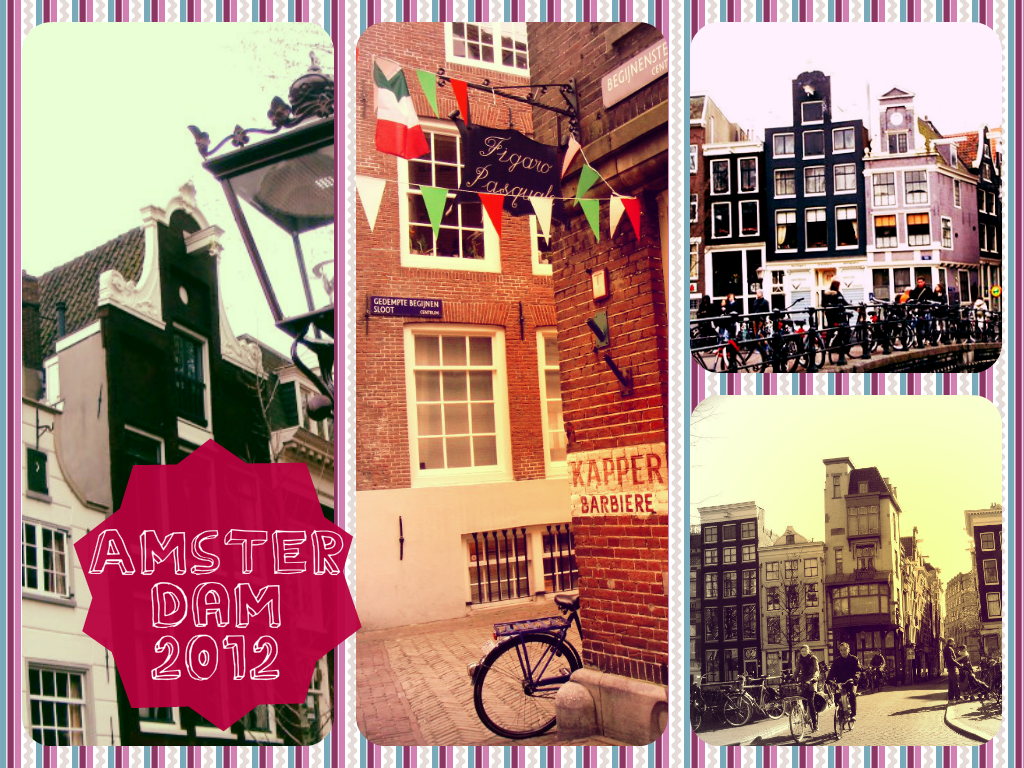 [2012, Amsterdam]
Weather was grey, cold was piercing - a bit like it is in these days.
But Amsterdam has been enchanting.
They call it "Venice of the North", and, if we want, there is some undeniable resemblance, because of their merchant soul and their topography developed on the canals web; but I think this definition actually dimishes it, because Amsterdam is a city with a well-defined personality, it's no one's Northern copy. If it was a Venice, it would surely be a more modern and efficient one, with its flemish houses that, like in Venice, are leaning, because of their foundations keeping the balance on the water, but that are more preserved from the humidity's hunger.
The two main reasons that make Amsterdam popular push through, and they are undoubtly what strikes you more: seeing people in windows, on sale like any other good, has a certain impact; and the sticky smell of the cannabis coming out from coffee shops accompanies you almost everywhere - each city has a smell of its own, and this is Amsterdam's one.
Then there is also a more playful declination of these two aspects, which is given by the sexy shops, which sell tools which imply a couple of seconds of thinking to realize how exactly they have to be used, or by the condomeries, with condoms of any color, flavour and shape (...yes, shape). And, again, by shops that sell weed seeds like elsewhere groceries would sell plants and vegetables.
But Amsterdam is more than this, and such "more" is actually so rich and interesting that it's almost a shame that its fame is mostly dued to its transgressive side only.
Flemish buildings, tall, slim and curly, mirror themselves in the canals and wear pastel colours; churches spire, even taller, with their elaborated pinnacles; and there are cats just everywhere, welcoming you in the pubs, or peeping you from the houses windows.
I must confess it was some years that I wanted to visit it, but I was keeping on postponing the trip for a rather silly reason.
Everyone has his stupid fears, and (one of) mine is bycicles.
Not only riding them, but also when they suddenly appear behind me.
And, well, actually Amsterdam is no city for bike-phobics: from one side I'm enchanted by how skilled Dutch people are at riding them, being able to get multi-tasking while doing a whole lot of other stuff while they pedal at the speed of light, without never stopping neither in front of walkers nor in front of other vehicles, always being able to dodge you last second; but... I was also kinda petrified.
But, the fact that, not only this hasn't poisoned not even a tiny bit my memory of the visit, but it even didn't prevent me to want to come back a second time, says a lot about how much I've liked this city.