The Holy Island of Lindisfarne

What makes an "holy place" holy?
Is it only the sheer fact of being chosen, more or less casually, to erect a temple, a church, a worshipping building?
Or maybe it gets chosen exactly because it actually emanates sacrality, because it's a place where man, for some reason, for some esotherical requirement of its topography, or simply for its beauty, is able to feel closer to god?
I like to think that, once upon a time, there must have been an era when human beings used to be more aware and deep in living their own presence on this Earth - and that, therefore, also their spirituality wasn't made only of concentration and isolation, but mostly of communion with what surround them, in an holistic exchange with the harmony of nature all around, in order to reach that wonderful sensation of feeling part of the Whole.
And that, so, holy places weren't chosen randomly.

There are places that are being considered sacred since thousands and thousands of years, actually exactly since when man has started stepping on them and having awareness of his own soul.
It doesn't matter which civilizations and religious beliefs have succeeded one another on the domain of these lands - maybe it can be the only point of agreement they've managed to find, but all of them have agreed to consider these as sacred places.
Maybe because there are particular energies flowing in the underground, twisting, embracing and emanating through the grass, the rocks and the sea: beautiful and powerful energies that nowadays, closed into our own selfishness, with our senses numbed by the comforts of our society, we are no longer able to perceive - but that used to be able to sweep away the ones who were able to listen to them, flowing in their veins and opening their sensorial perceptions towards something more elevated and thick in mistery. 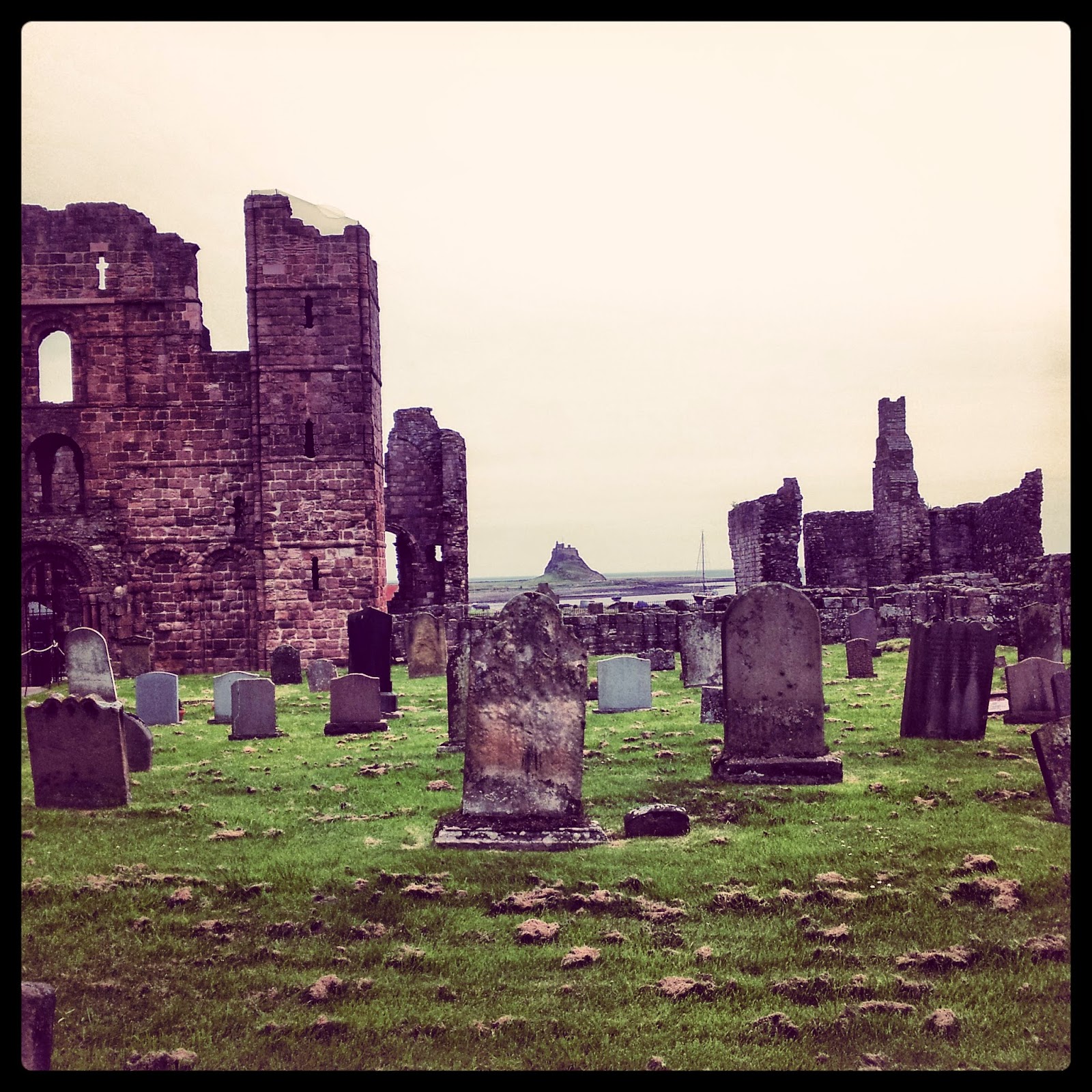 Holy Island of Lindisfarne, commonly known simply as Holy Island, is, probably, one of these places.
It's situated in the North-East of England, on Northumberland coast, just below the Hadrian's Wall and the Scottish border.
Like many other places considered sacred, it's a tidal island: twice a day tides submerge the narrow street that links it to the mainland and separate it, transforming it from promontory to island.
Maybe this charachteristic is also one of the things that makes it sacred: during the old times sea was considered a dark and powerful force, uncontrollable and untamable, and used to be worshipped like a god, a fearful god, of whom they were trying to get the benevolence, but that could also offer nourishment and safety.
And a place that didn't belong to the land nor to the sea, that wasn't always accesible, not by everyone, that sometimes was isolating, detaching from the rest of the world, allowing not only the most total introspection, but also the most wild communion with the Creation, couldn't be but considered sacred.
Almost like the Avalon of the Arthurian legends, hidden and protected by the mist, only rarely accessible, only by those who look for it.
Or by those who bump into it by chance. 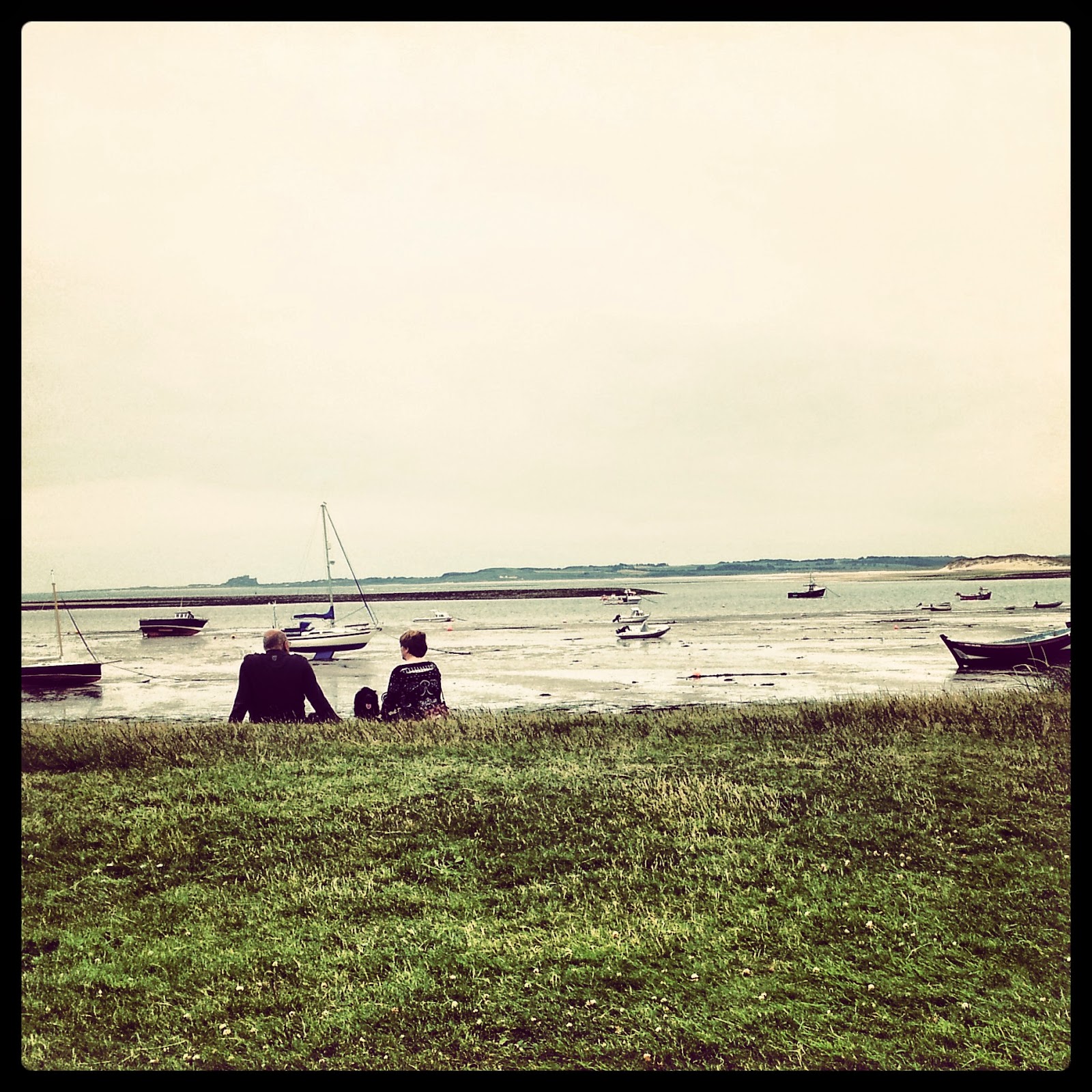 Even if nowadays it looks like a normal and very cute tiny fishermen village, Holy Island still preserves the vibes and the charme that, a very long time ago, had made it earn a label of sacrality.
To visit it you must get informed about the hours of the tide, and, if you want to reach it by public transport, you'll have to take in account that, by missing the last ride, you'll have to be stuck on the island until the day after.
Which may be not too bad, after all - you just have to be aware about it.
On the contrary of some other tidal holy places more famous and touristic, here there is no overhead motorway nor any ferries for when the tide rises. 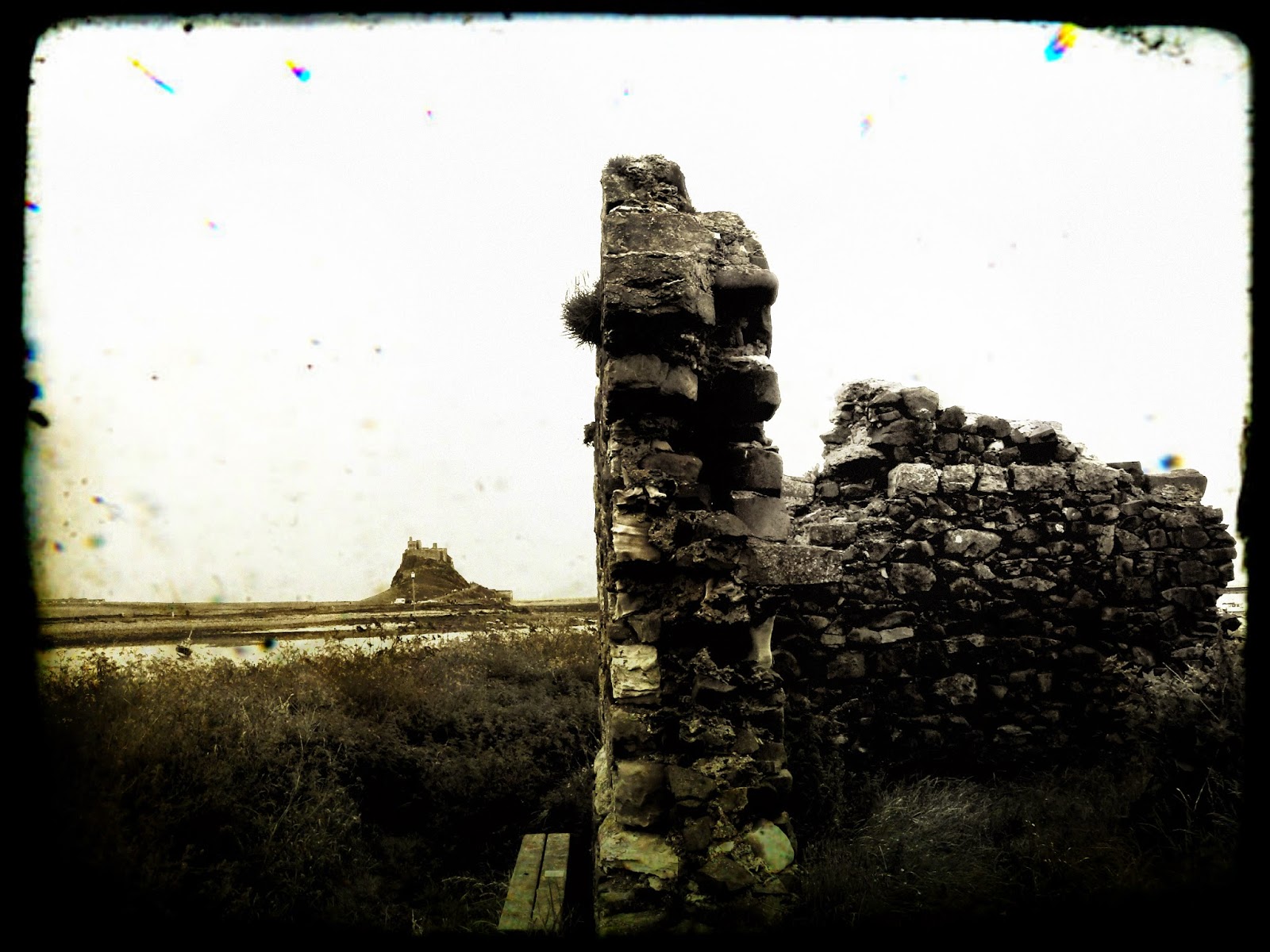 On the day of our visit the sky is grey and a bit dramatic, but I don't mind it.
It actually is part of its charme, and it gives it a very intense and melancholic allure.
Somebody maybe may conceive it in a negative way, but to me melancholy is already a state that has its own halo of sacrality: it's a state that leads you to dig deeply inside yourself, finding maybe some things that may scare you or hurt you, but that, at the same time, you are able to find beautiful anyway.
You are able to love them anyway. To love yourself anyway.
And this is the most sacred thing ever. 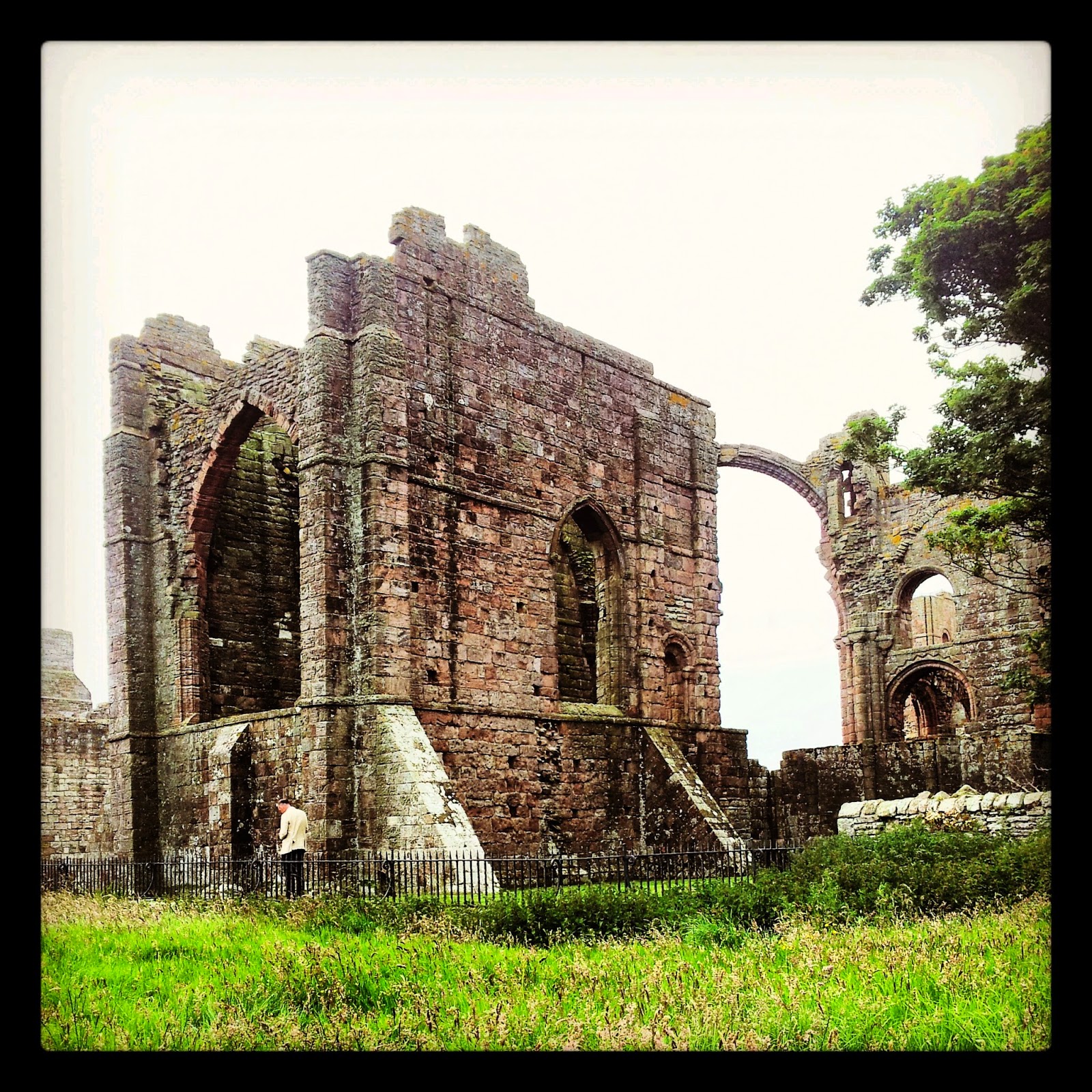 Maybe this sky makes the Holy Island a bit frowning - but, that is, I exactly find it beautiful.
The street we make is a very clear evidence of its tidal nature, scattered with dry seaweeds, sand and other remains that the sea loses from its pockets when it slides away.
It's like a callus on the finger that reveals that the owner of that hand is affected with the writer bug: these seaweeds-shaped calluses reveal that the sacrality of this places consists of being kidnapped by the sea. 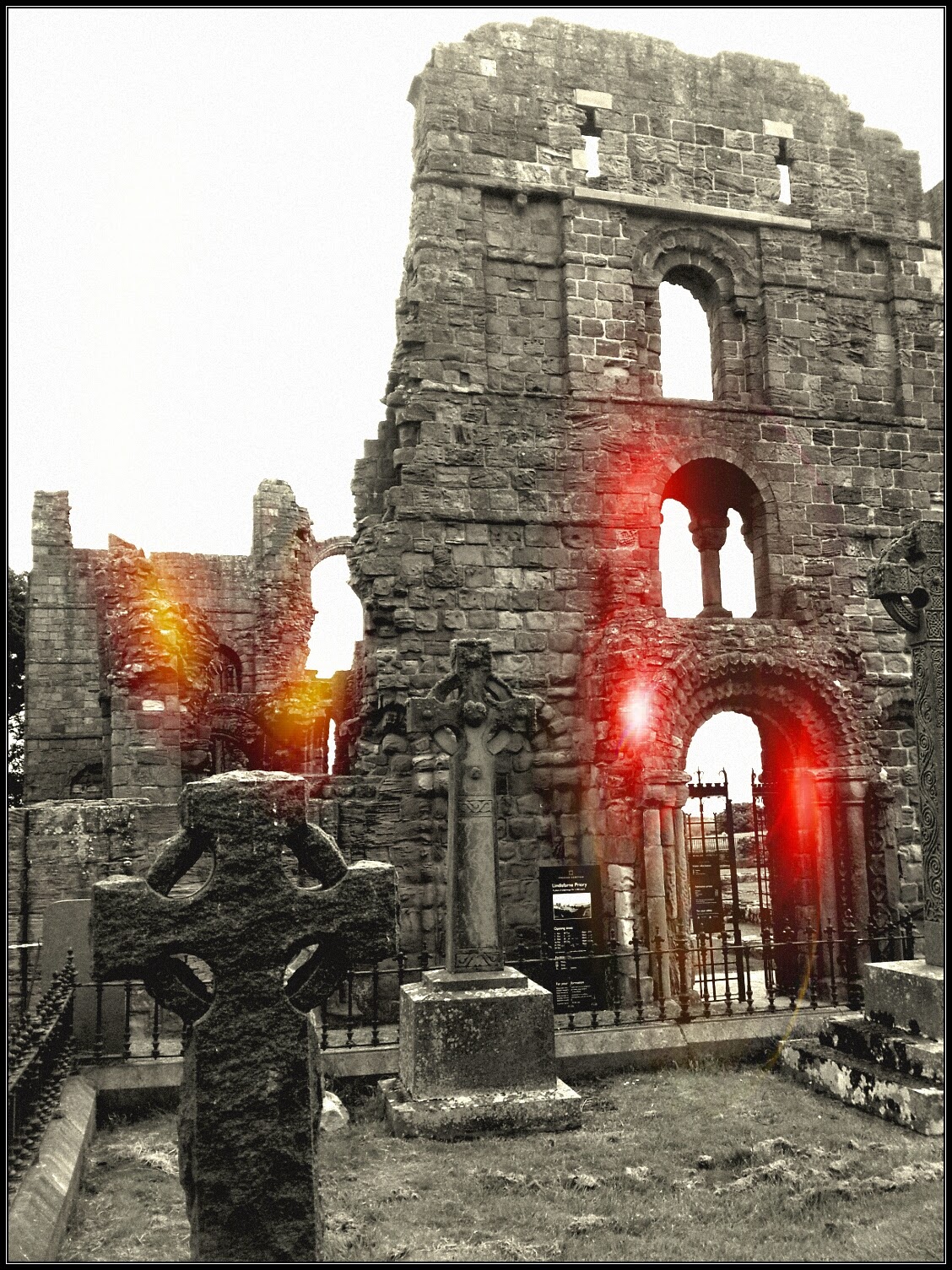 But we humans from the 21st century are no longer able to perceive sacrality through the energy and mysticism of nature.
We need elaborate artifacts of stone and glass in order to know that a place is sacred. Exactly like we need rituals and dogmas in order to pray.
And so there is the Lindisfarne Priory to remind us why this place has the name it bears.
This abbey has been founded in the 6th century, at the beginnings of Christianity, when around here it wasn't easy yet to understand whether Saints were priests or druids.
The most important manufact that its monks have left to us are the so called Gospels of Lindisfarne, an handwritten copy in Latin richly illustrated, which is nowadays kept at the British Library  in London.
Nowadays of the abbey only ruins are left, but they are ruins which work as a rich and stunning frame for the mystical halo of this place.
This reminds us that it's nature that holds the sacred: man only makes a frame for it to celebrate it.

And I wouldn't miss to tell that the old cemetery of the priory has a very charming and friendly guardian: 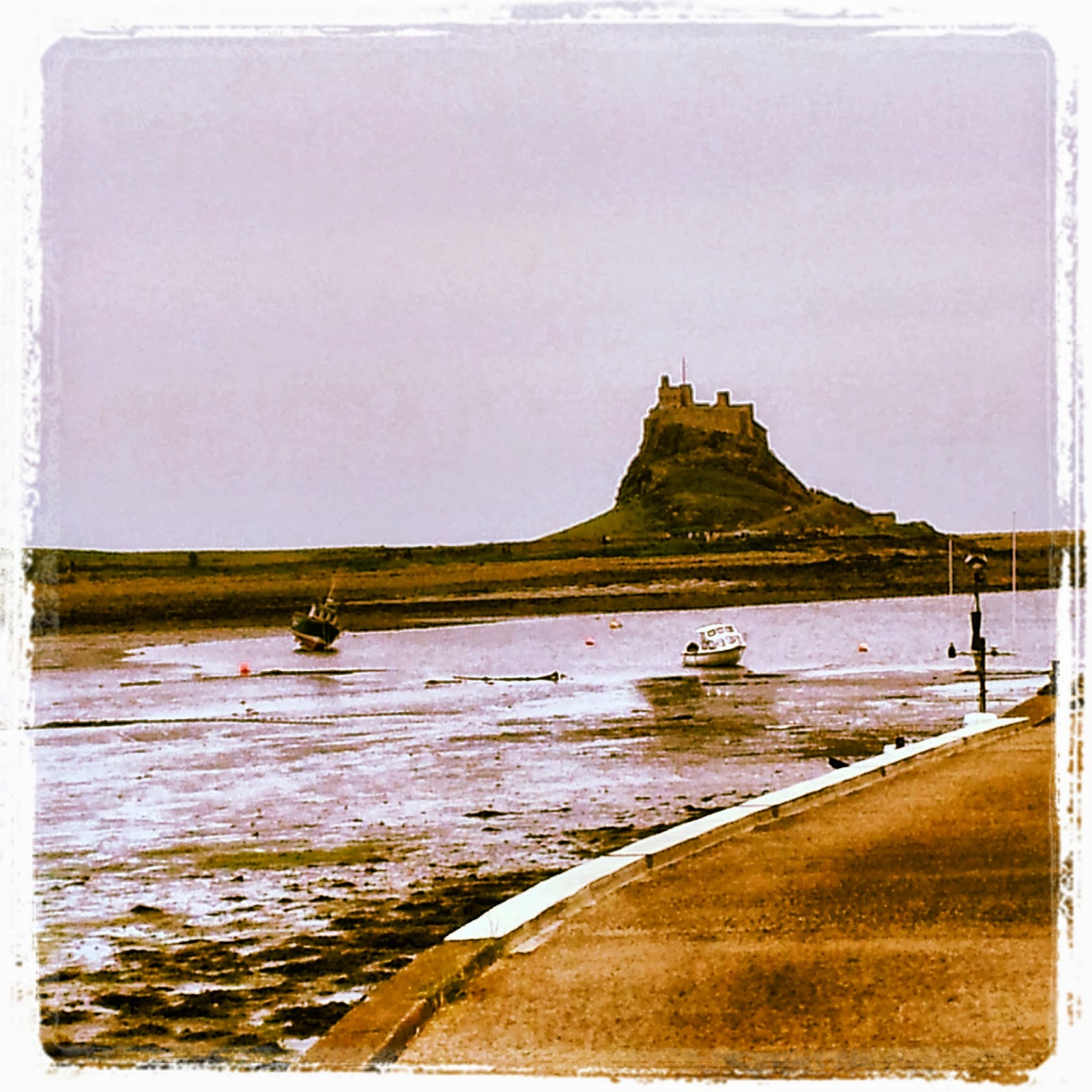 Lindisfarne Castle is not a sacred symbol, but, for the way how it reaches out proudly towards the sea, tiny but royal, it evokes respect anyway.
It's a Tudor castle that, at the beginning of '900, has been acquired and restored by the editing tycoon Edward Hudson, to transform it into his own home.
Roman Polanski chose it as a location for a couple of his movies, including his own version of Macbeth.
It's perched on a small promontory, which leaves behind the island and its spirituality represented by the ruins of the abbey, and it watches, cocky and a bit self-defensive, towards the sea.
The path to reach it climbing over its rocky base is steep and blown by the wind.
But this makes the conquer even more precious and the panorama that you can contemplate from the top, where the castle's mass shelters you from the air, even more beautiful.
And sacred...