Once upon a time there was a Queen... who had a Villa

There are cities that never end to surprise you.
They're that kind of cities that had a very long History, intense and rich of ups & downs. Those cities that have mysterious and slightly sly ways just like an Experienced Woman, but that at the same time manage to keep the class and the aplomb of the nobility to which they belong.
A nobility that might even be decayed, that might even be transformed into working class humbleness, but that, when it's real and genuine, still keeps its own dignity and beauty.
And, maybe, it even manages to catch you by surprise with some unexpected discoveries, just like when you climb up to the attics of old palaces, and you find a dusty chestbox to rummage.
Turin is undoubtely one of these cities.
And its attic is the Hill, where it's situated the Villa della Regina (Queen's Villa), a small and precious jewel forgotten in a chestbox. 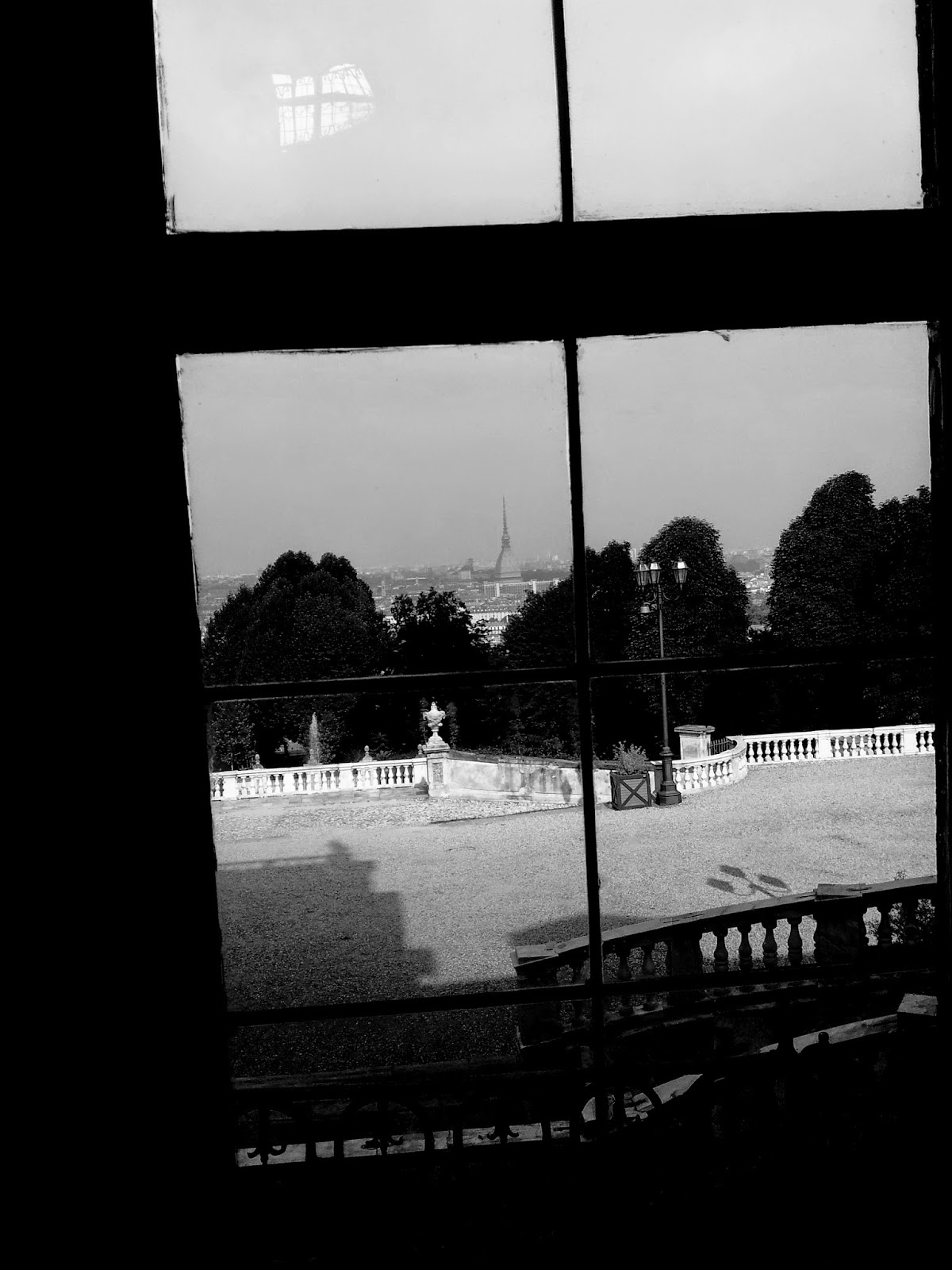 Actually this chestbox is not even that hidden.
It's enough to wait for a bus in via Po, or to sip an open air aperitivo in Piazza Vittorio Veneto in order to notice its discrete and out of time kind of beauty that peeks from the hill behind the Gran Madre church.
It looks like a girl from another time, obliged to stay locked in the house by some moral rules that nowadays would make us smile, and who looks from her window, melancholic and resigned, life going on.
Some tourists sometimes ask what is this kind of ghost of a 17th century villa - maybe being surprised because something so beautiful is so not famous, being just mentioned casually on the guides. In Turin any palace, villa or castle which is labeled as "royal" is inevitably connected with the Savoy.
And this villa brings the signature of Ascanio Vittozzi and of the Castellamontes - great names of Savoy architecture, who have designed a considerable slice of Turin's historical city centre.
The "Queen" who gave the name to the building was a baby queen, that Ludovica Maria of Savoy who, aged 13, got to marry her almost 50 years old uncle - who until that moment used to be a Catholic church cardinal. It was the sort of game of power that, back in the days, was considered with totally a different morality than the one we would use nowadays.
Well, to be precise Ludovica wasn't really a queen, because we are in the second half of 1600 and the Savoy's domain was still a dukedom.
And in fact at the beginnings its name was Villa Ludovica, and, if for her maybe was some sort of dolls house just a bit bigger, for her uncle hubby, who had made it built as a marriage's gift, it became a literary salon of very high level, with the green and the silence of the hill to conciliate introspection and reflection.
The (ex) Cardinal Maurizio was a man of culture, who used to love science and history, and nicknamed this salon, where he had had the chance to gather some of the most important intellectuals and academics of his time, the Solitaries Academy.
This makes me like him a tiny bit more, I must say.

But this villa kept on being very successful even on the next Savoy generations, expecially among the ladies - so much that it finally earned the name with which it is beknown nowadays.
It even caught the fancy of Napoleon himself - even if the whole Northern Italy is so stuffed of places bearing the plate "Here slept Emperor Bonaparte" that the thing kinda loses a bit of meaning.
But you cannot be liked just by everyone, and maybe Vittorio Emanuele II (first king of Italy) wasn't really part of its fandom - because he decided to donate it on charity to a philanthropic association for the daughters of the Indipence Wars victims.
His son Umberto I, however, maybe was feeling a bit nostalgic about it, and he made move in his Quirinale apartments in Rome a lot of the furniture it had, including a beautiful ebony library.
I understand him, finding a bookcase spacious and big enough is just not easy. And he didn't have Ikea yet... 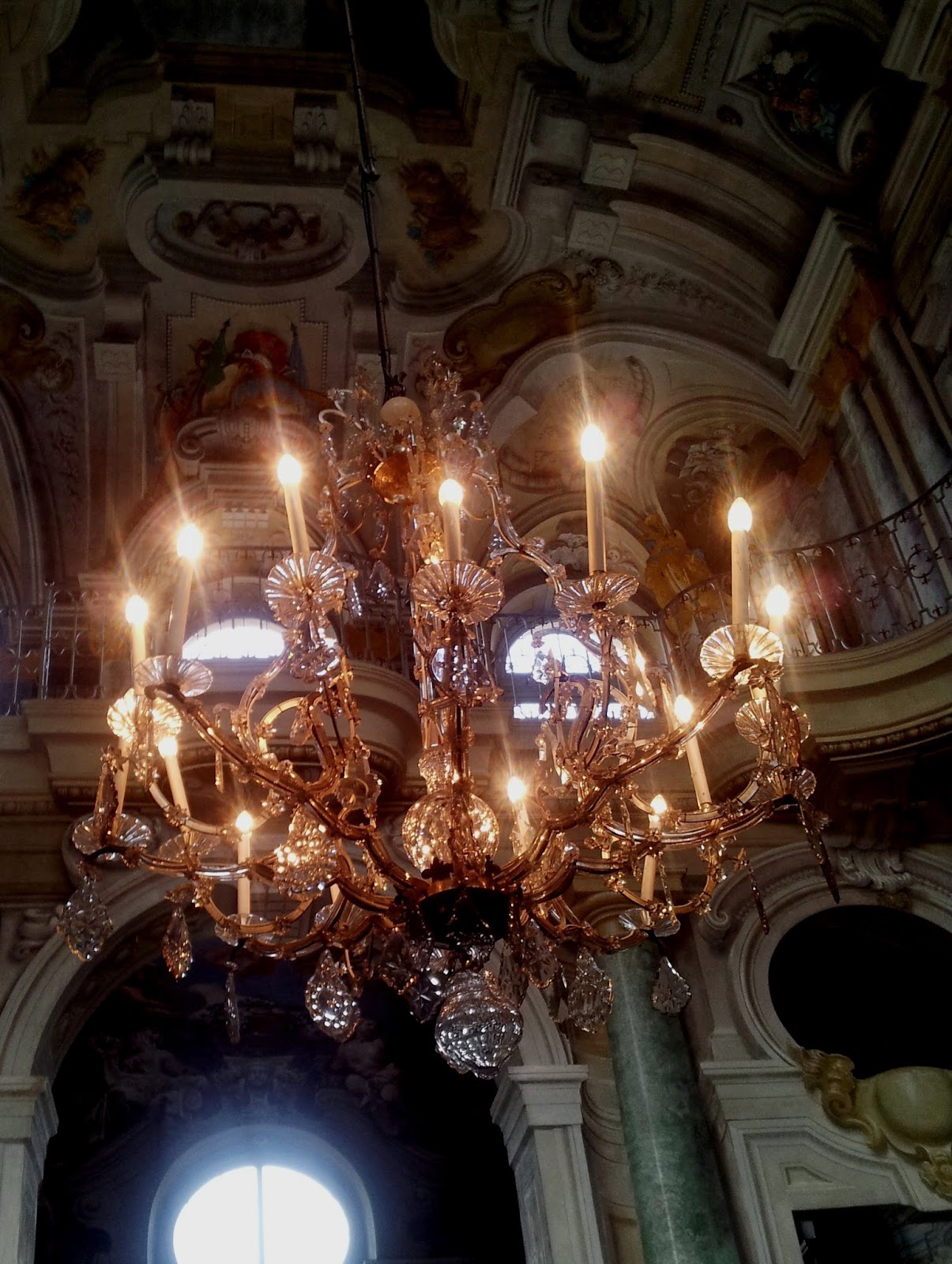 The Villa anyway had already started its downhill way, and during WWII bombings gave it also some bad wounds.
When the war was over, Italy became a Republic, Savoy were sent to exhile and the Villa got stuck in the chestbox.
Nobody took care of it anymore and it got to become so pestered by vegetation that it looked like a temple's ruin in a pluvial forest.
Then, luckily, in 1994 somebody got to remember that there was a jewel in that chestbox, that was at risk to get destroyed by mold and neglect - so he found a way to get a key to open that chestbox. 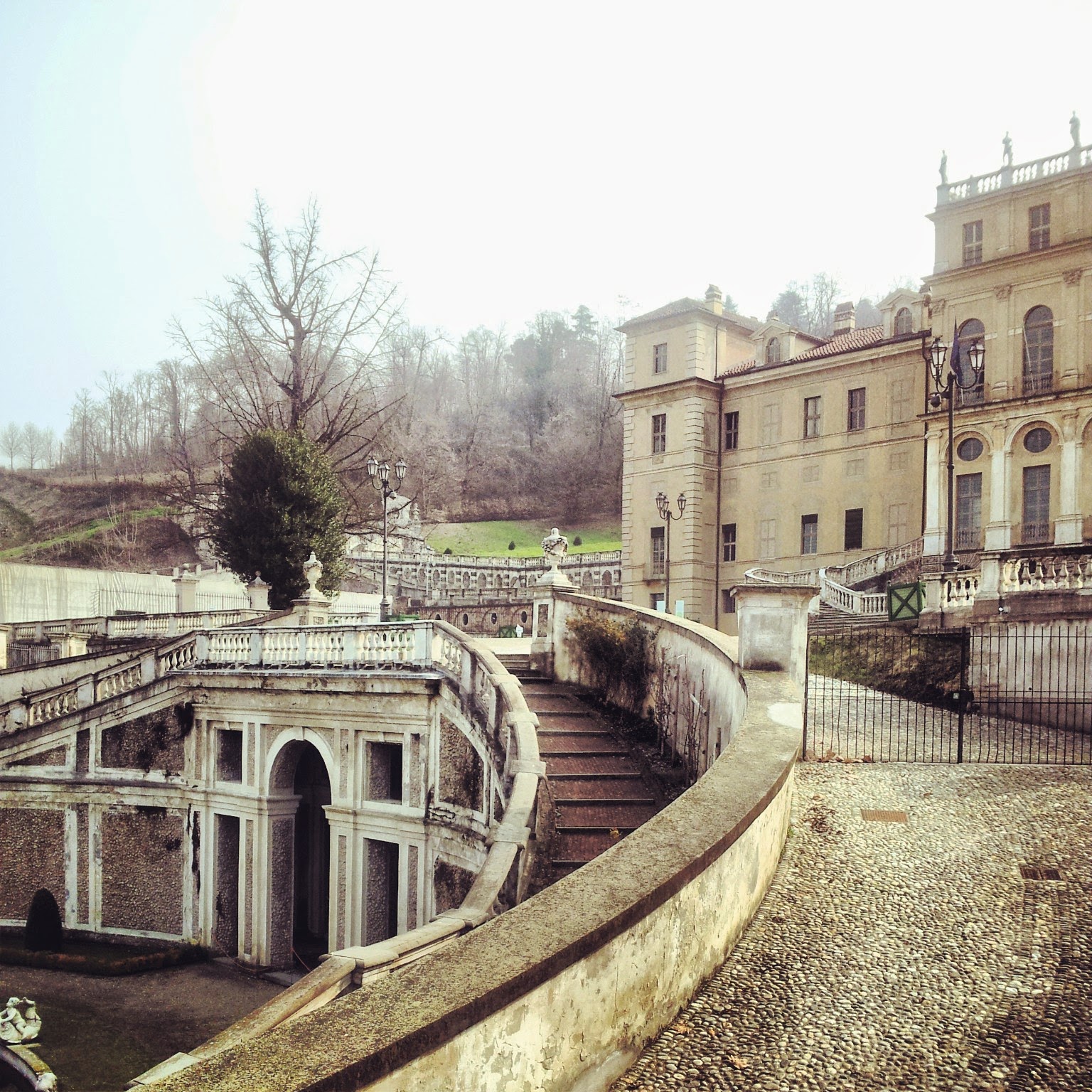 I've got a short and tormented story with the Villa.
I had forgotten about it me too, for years, leaving that chestbox closed in my personal attic of wanders along Turin.
Then, during last Spring, I decided I had to see it.
I decided I wanted to see it.
Its calling had become very strong and for some months it's got transformed into my own little chimera to follow: one of those place that, every single time you want to visit, you always get the impression that destiny is having fun by putting some obstacles to it. 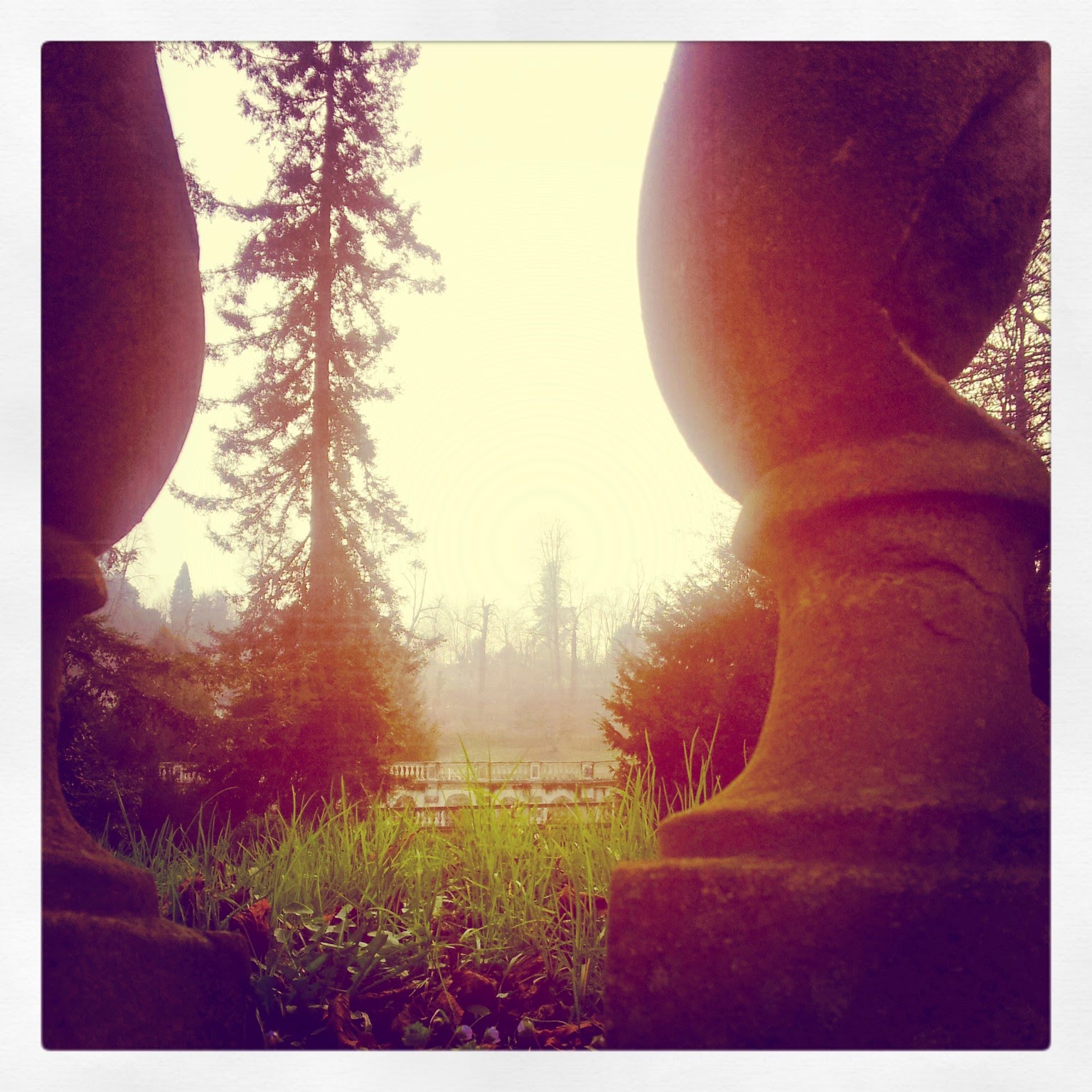 First time I had tried, back in March, it was a Monday, and Monday is its closing day.
I've leaned against its barred gate with the disappointed pout of a kid in front of a toys shop where mum has prohibited him to enter.
I took a picture of it across the bars, and I've tried to peek its Italian garden from the stone parapets.
I've tried again in June, on a Tuesday.
After the long and steep walk (but you can go by car, or at least getting closer with a bus, you don't necessarly have to be as masochistic as me), I find it close again.
They had kept it open on the day before, because it was bank holiday, and so they had to recuperate the closing day.
In August, finally, on a Wednesday, I happily cross its gates. 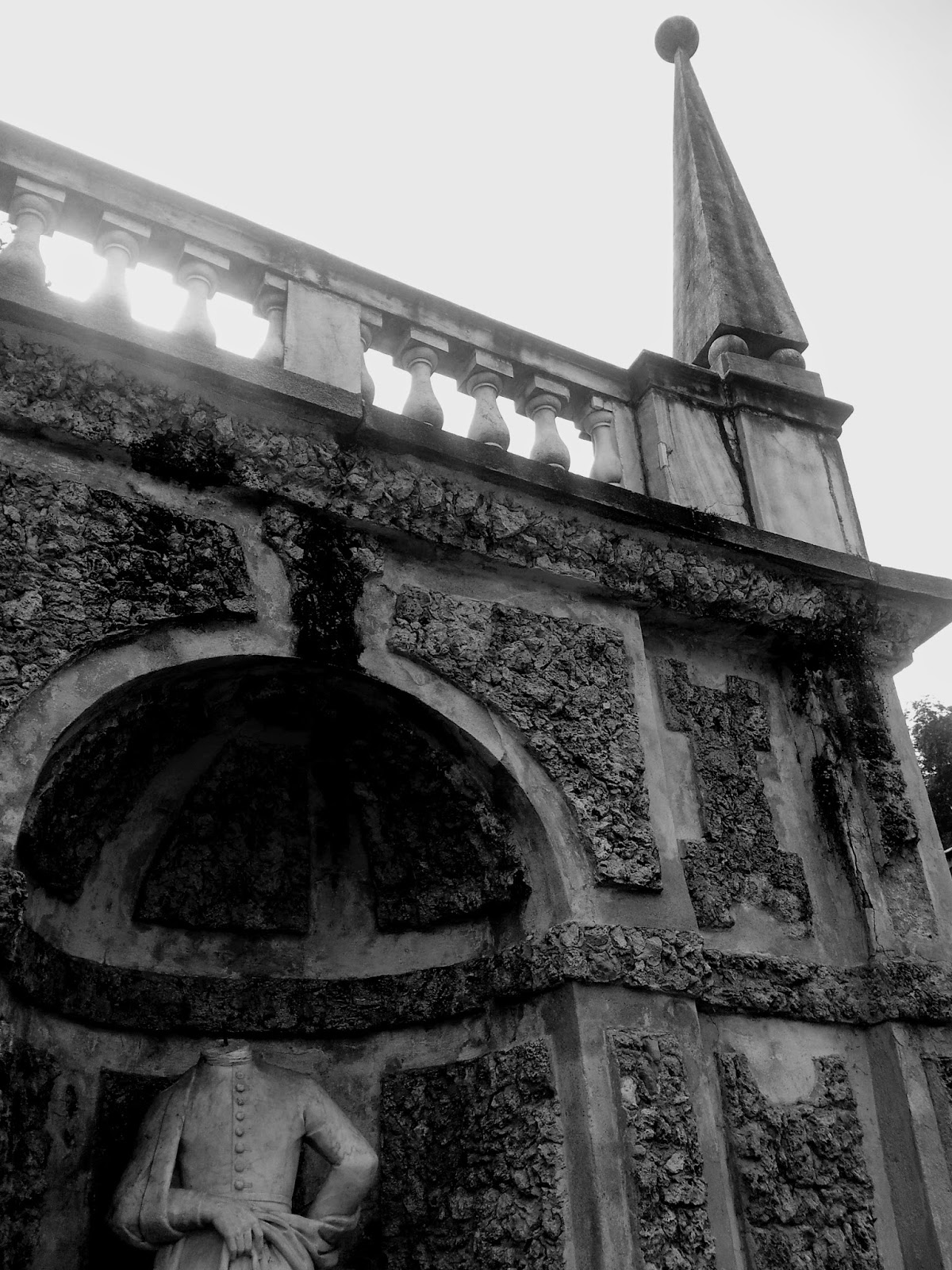 Maybe this decayed Queen that we were seeing peeking from the hill was hiding herself behind the window not really because they weren't allowing her to go out, but because she wasn't feeling like doing it herself.
She's a girl who had been used to be beautiful, and now she's defaced by the scars and by time passing. She's a queen who had been used to be rich, and now she wears poor patchy clothes.
She's the ghost of a villa.
But she's still able to be so with noble dignity. 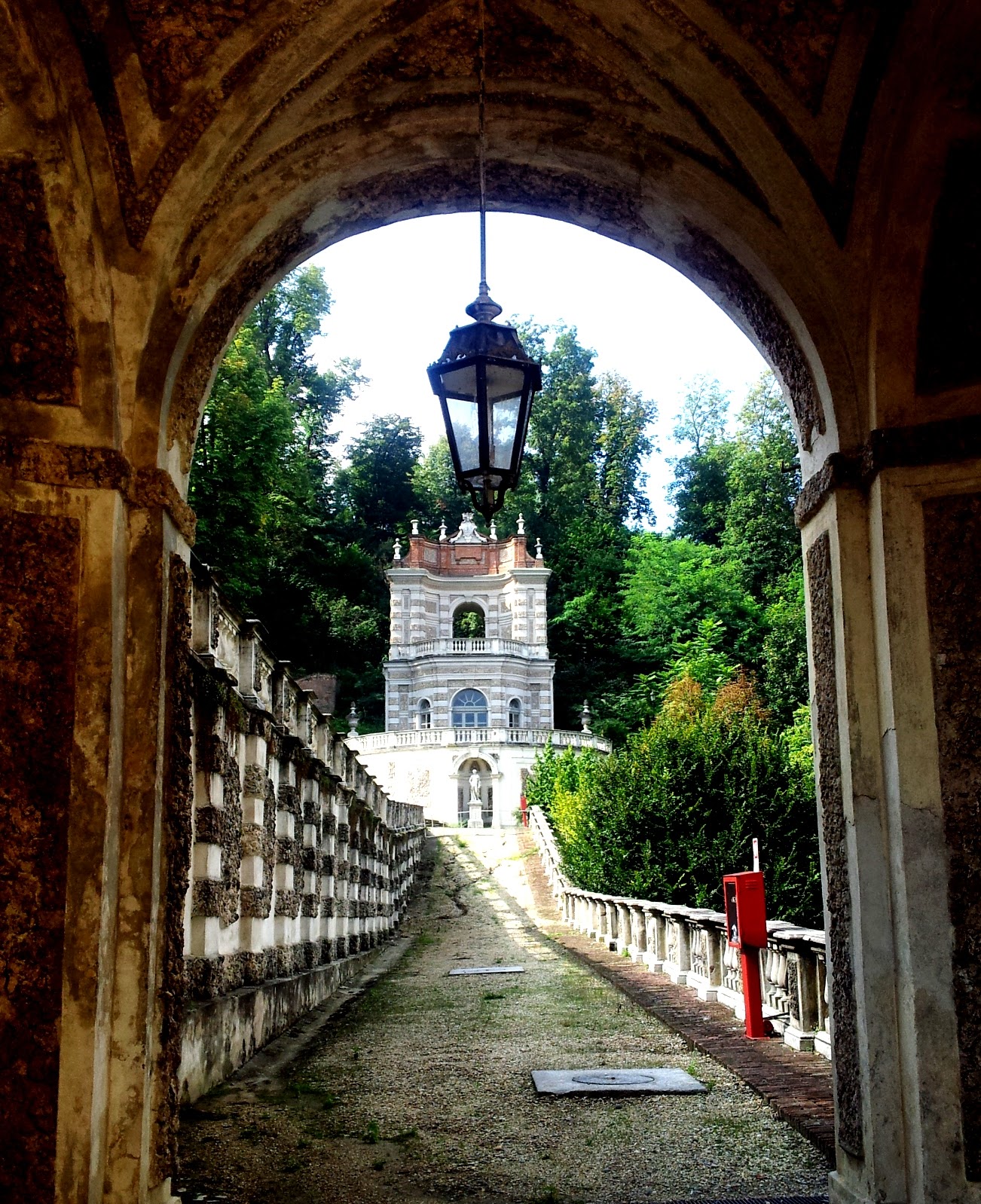 Grass is dry and yellow, but it's being cut regularly.
There aren't any flowers, but this year there are few of them in the whole Turin. Cuts and crisis, I bet. Surely not drought.
Fountains statues are war veterans beheaded or crippled, and molds and atmospheric agents have smoothed their features making them faceless like Pompei's corpses. But water games keep on spurting among their wounds.
The vineyard has been brought back to life, and, since 2008, a Freisa harvest is being regularly taken. 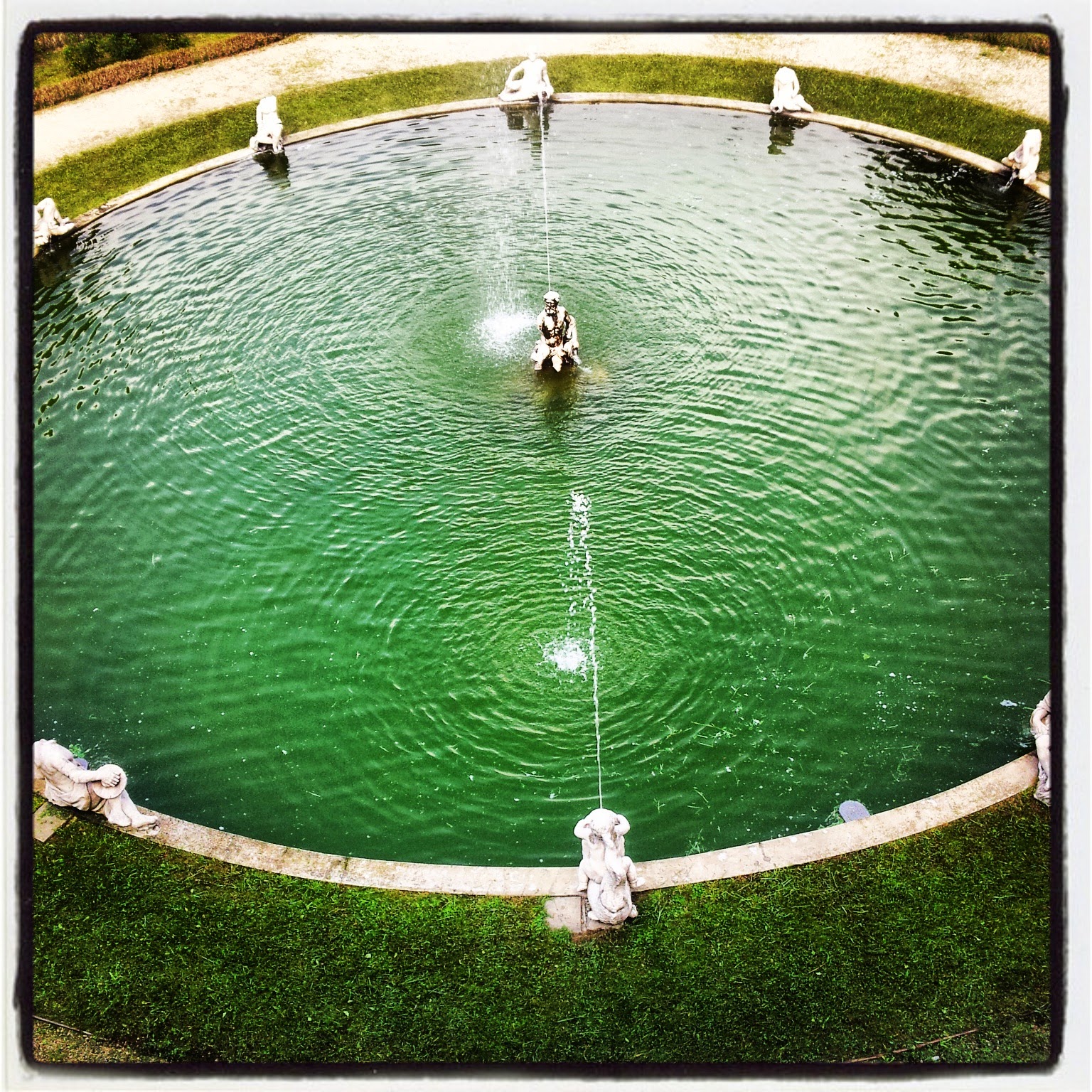 We still have the scenographic beauty of the Gran Rondeau, with its double staircase and the central fountain, which works as a pedestal for showing the building.
Inside the Villa has no furniture, but there are still some frescos and tapestries.
There was also a soundtrack of live instrumental music: some false note every now and then, but it was perfectly allowable, since they actually were music lessons taking place in this very special location.
But the Villa is a jewel with a double bottom, and the best part of its garden hides on the rear of it: a three levels Italian garden, with grottos, hedges, statues, cascades and a marble belvedere. 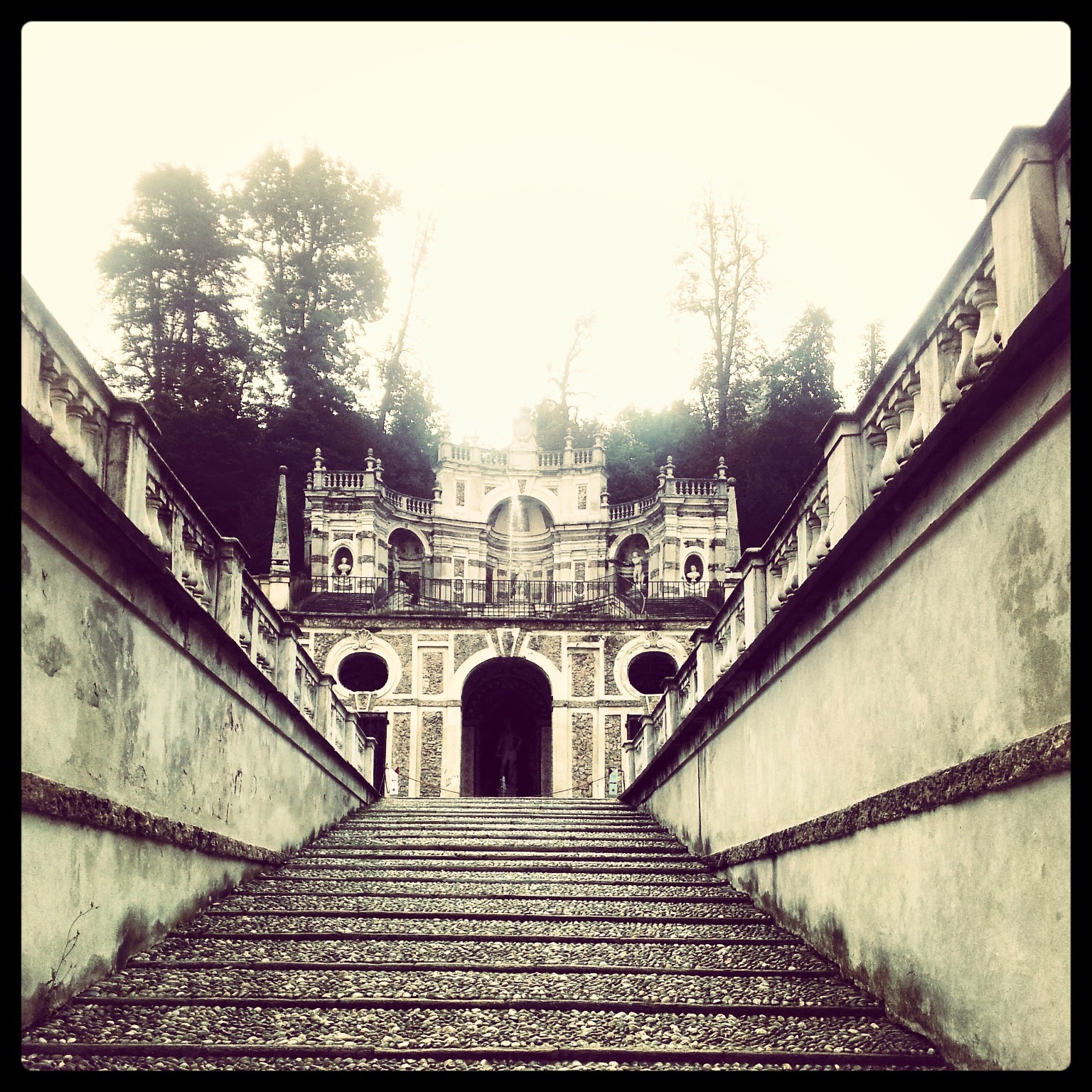 Entrance to the Villa is free, and you can take a guided tour at 11 am, for free as well.
And what's to say?
My opinion about it is a bit conflicting.
While I was walking through the bare garden with its beheaded statues, I couldn't help but thinking what, perhaps, I think a bit too often: "If we were in the UK..."
If we were in the UK, sure, the entrance wouldn't be free.
But the Villa would be furnished, there would be illustrated panels telling its rich history (just in case you'd miss the guided tour, or simply if you'd prefer to visit it by yourself) and there would be walk-ons wearing costumes ready to answer to the questions of the most curious visitors. There would also be a visiting path expecially for children, with comics and games suitable to stimulate their interest and to let all the informations well imprinted.
The garden would be colorful and luxuriant, full of flowers and plants, with soft and green grass (and please don't tell me that in the UK it rains much more than here, because I can totally assure you that this year it's happened the exact contrary).
Statues would have been restored, and in the Cardinal Maurizio's Solitaires Pavillion they would organize cultural events nowadays as well.
There would be a souvenir shop, full of merchandising, pretty postcards and interesting books.
There would be a café that would exploit the spectacular view that can be enjoyed from here. But I know, we are not in the UK.
We are in Italy, and we lack of the love and pride for our history and our culture that would bring us to let shine our touristical resources.
I know, there are no money, but we should also learn to create money, exploiting better what we have, which surely is not little, taking out all our jewels from our chestboxes, and dusting them off.
But I'm aware it's a vicious circle that is difficult to break.
So, anyway, chapeau to who, in some way, has been able to do as much as possible to take out of the chestbox this one jewel, and to make it as much presentable with the resources he had available.
It's already some sort of beginning.
I'd like that we could go on...
Pubblicato da Serena Chiarle a 21:59