I've been in Copenaghen at the end of October last year: the air was chilly, obviously chillier than what it was in Italy - but it was still possible to enjoy staying out, not only strolling but even sitting on the bench for a while, with the proper equipment in term of warm clothes and with some sun shining.
I've like the city. It didn't beat Stockholm in my personal classification of the Nordic capitals, but it's an honourable second place, very close to the first one. And, while they have similarities in architecture and structure, Copenaghen assumes a very different declination from the Swedish capital - just like two cooks preparing the same recipes with (almost) the same ingredients, but adding a very relevant touch of their own personalities that make the final result undeniably different.
When you walk around Copenaghen, you just can't help thinking about Hamlet: there is something intense and tragic in this city, but I mean it in a positive, emotional way. Just like a very quiet and silent surface that hides strong and wild emotions.
You are compelled to seek these emotions, to explore hidden corners, to slip into courtyards, to follow secondary alleys. It's less tidy than its Swedish cousin - the surface lets shine through some hints of the turmoil: architecture has some extra curvy lines, here and there appear some strong colours.
Maybe, just like Hamlet, also Copenaghen questions itself about being or not being: but the contrast between the neat Scandinavian appearance and the more flamboyant flashes doesn't provide indecision, but a richer, variegated personality.
And now let me tell you which ones of these facets I've enjoyed the most...

[1] Nyhavn
This place is probably the most iconic one in CPH after the Little Mermaid.
The name means "New Harbour" and it's actually a channel that was built to connect the "real" harbour (I mean, the one by the sea) with the inner market square. But beside its practical use, it's incredibly pretty.
The colourful old houses and the shafts of the vessels moored there are a sort of real life postcard.
In three of these houses (namely the ones at # 20, 67 and 18) lived and worked  H. C. Andersen - and now I can understand where he grabbed a part of the inspiration of his work. 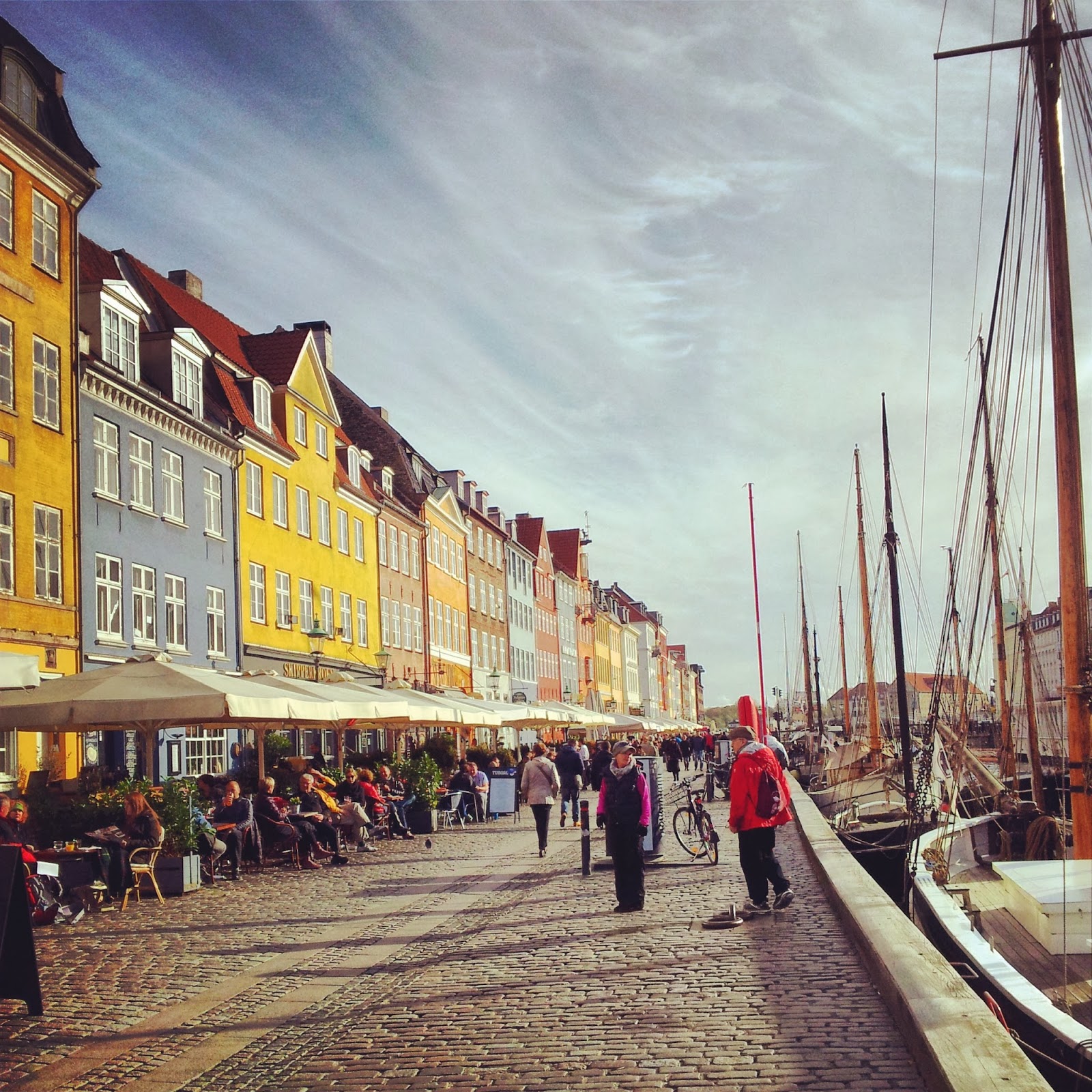 Nyhavn is also one of the prettiest areas where to have lunch, and there is indeed much choice.
Danish enjoy eating out, even at the end of October when the temperatures were already a bit chilly. But no worries: they are equipped with stoves and also provide you blankets to warm you up; so you can enjoy your meal. 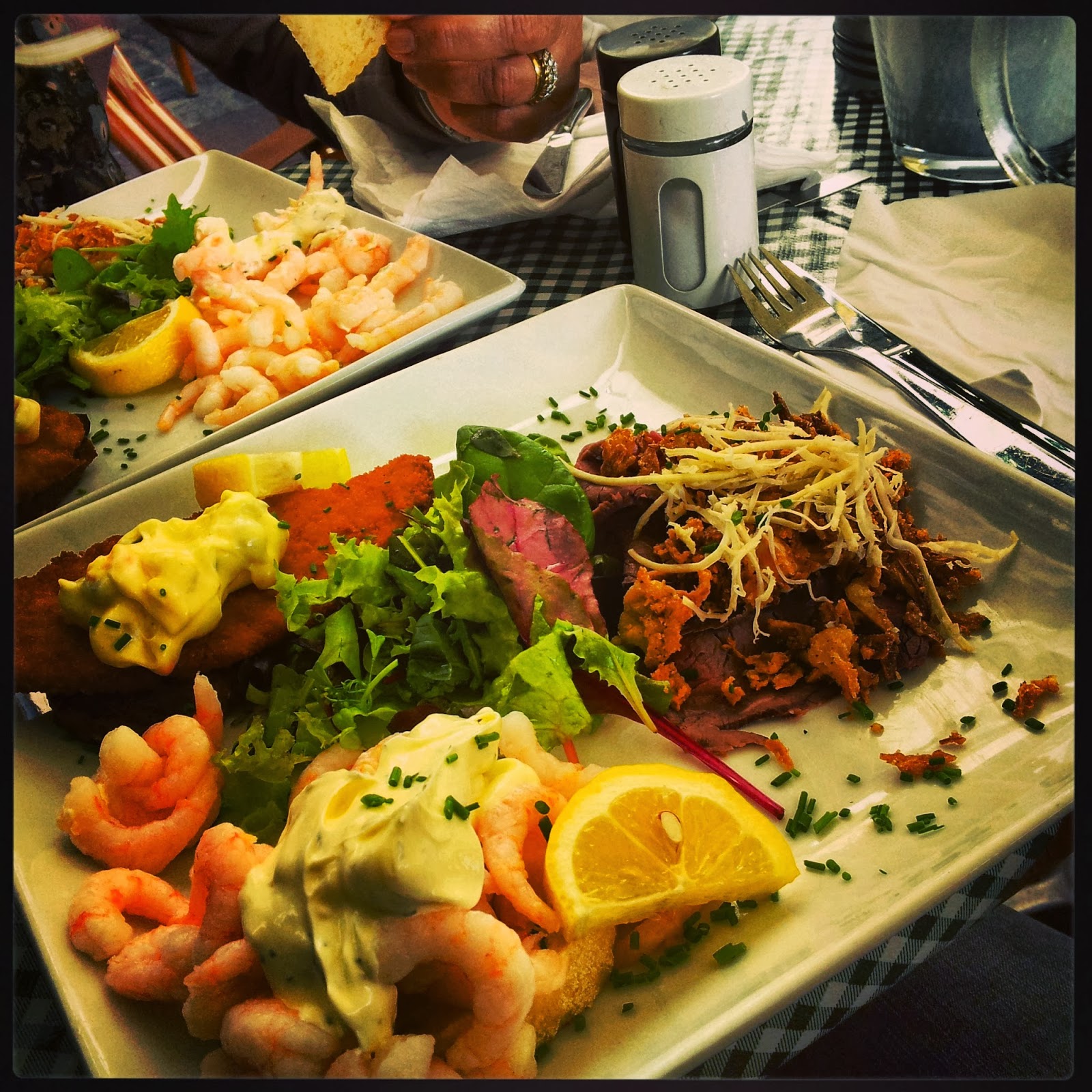 The place where we stopped by was called "Nyhavn Kronen" and we had a tris of smørrebrød - rye bread with different fillings, which include shrimps, fried cod, roast beef, fried onions and horseradish.
It was yummy!


[2] Royal Library Gardens
This is a small and peaceful oasis. I loved its atmospheare, it invokes introspection and it provided a lovely place where to hide and rest after having walked around the whole day.
It's behind the Christiansborg Slot - but it's a bit hidden: I've discovered it by sneaking into a doorway... and this is exactly what I meant a few lines above when saying that in CPH you must follow secondary alleys to find the hidden treasures of its personality!


While you are there, don't forget to explore also the rest of the Slotholmen island: the most relevant building is the Christianborg Slot, which nowadays hosts the Parliament. 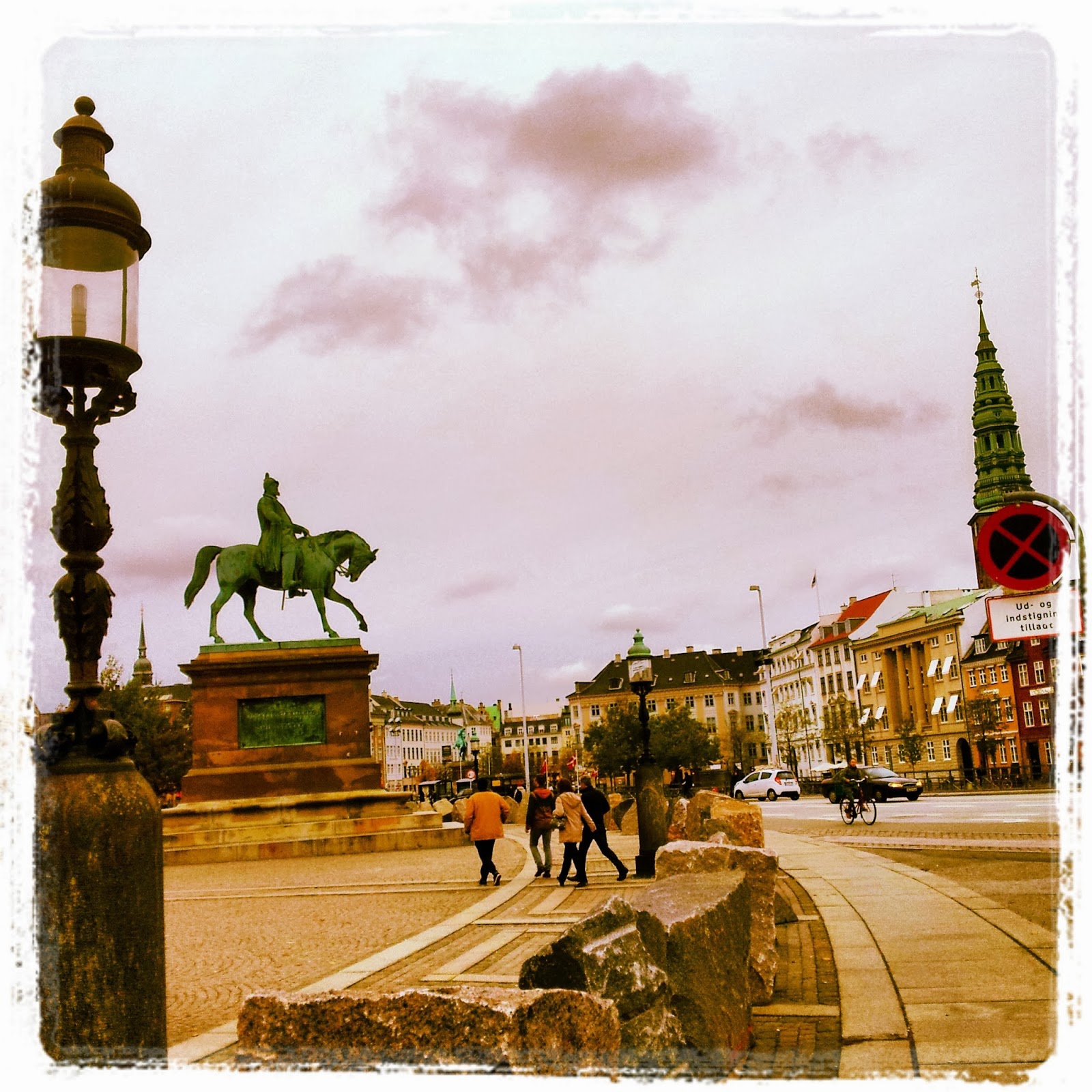 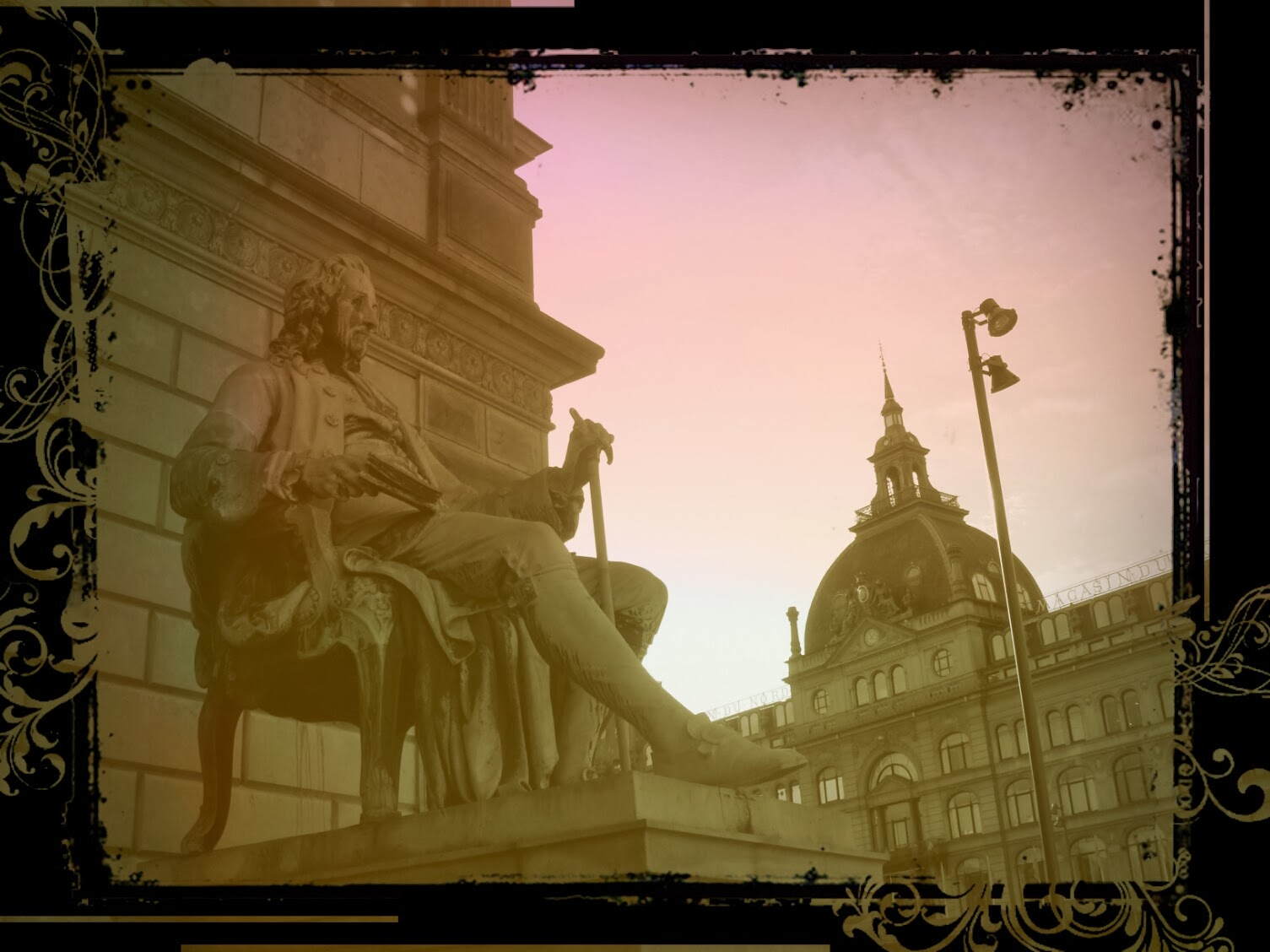 [3] Amalienborg
This is the most royal part of the city. And in fact, it's where the royal family lives.
The octagonal square is big and airy and the four Rococo palaces that surround it are majestic. 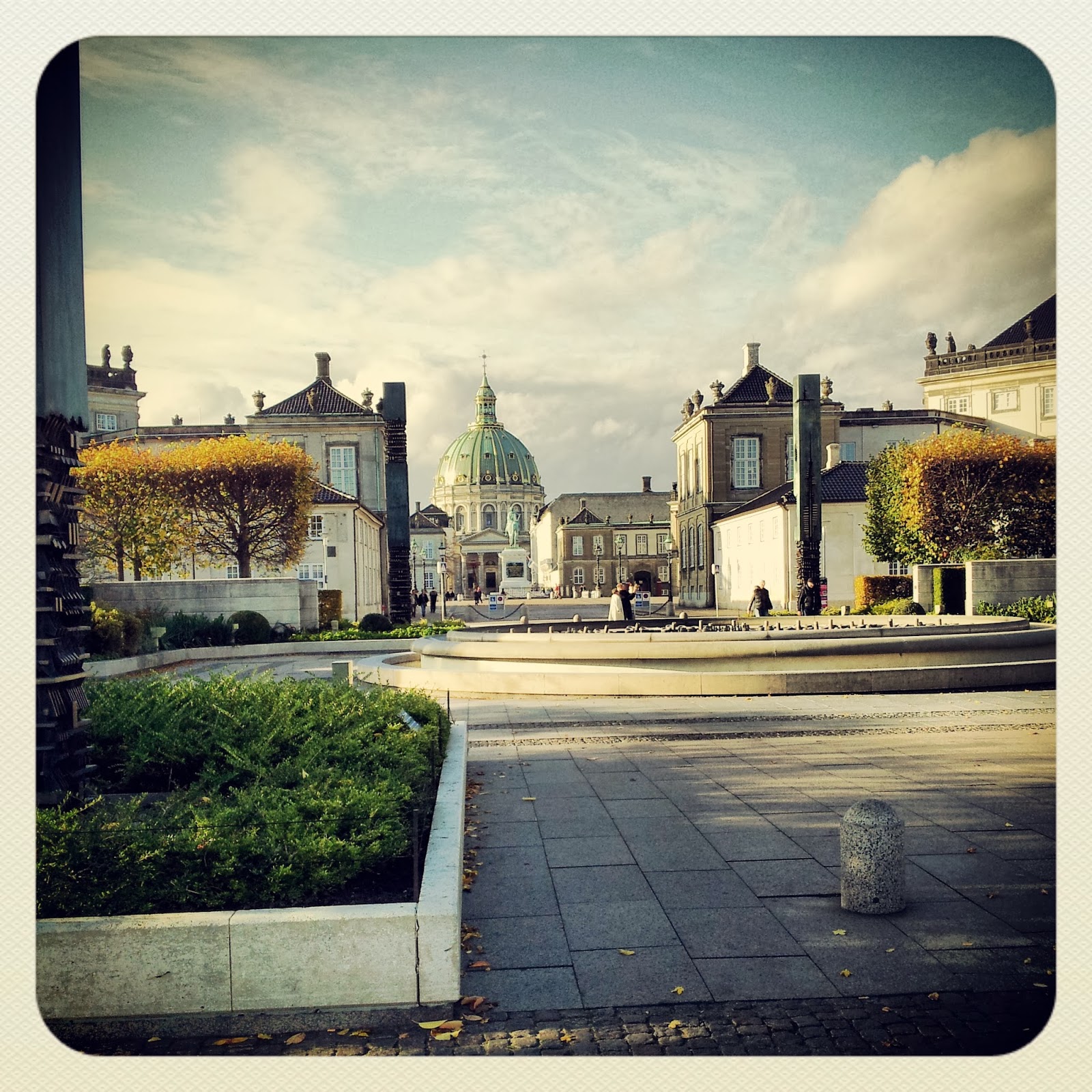 If you get there by 11 AM you can witness the Changing of the Guard.
Danish Royal Guards' uniforms are similar to the British ones (they even have the bear hat), but coloured in the shades of blue. 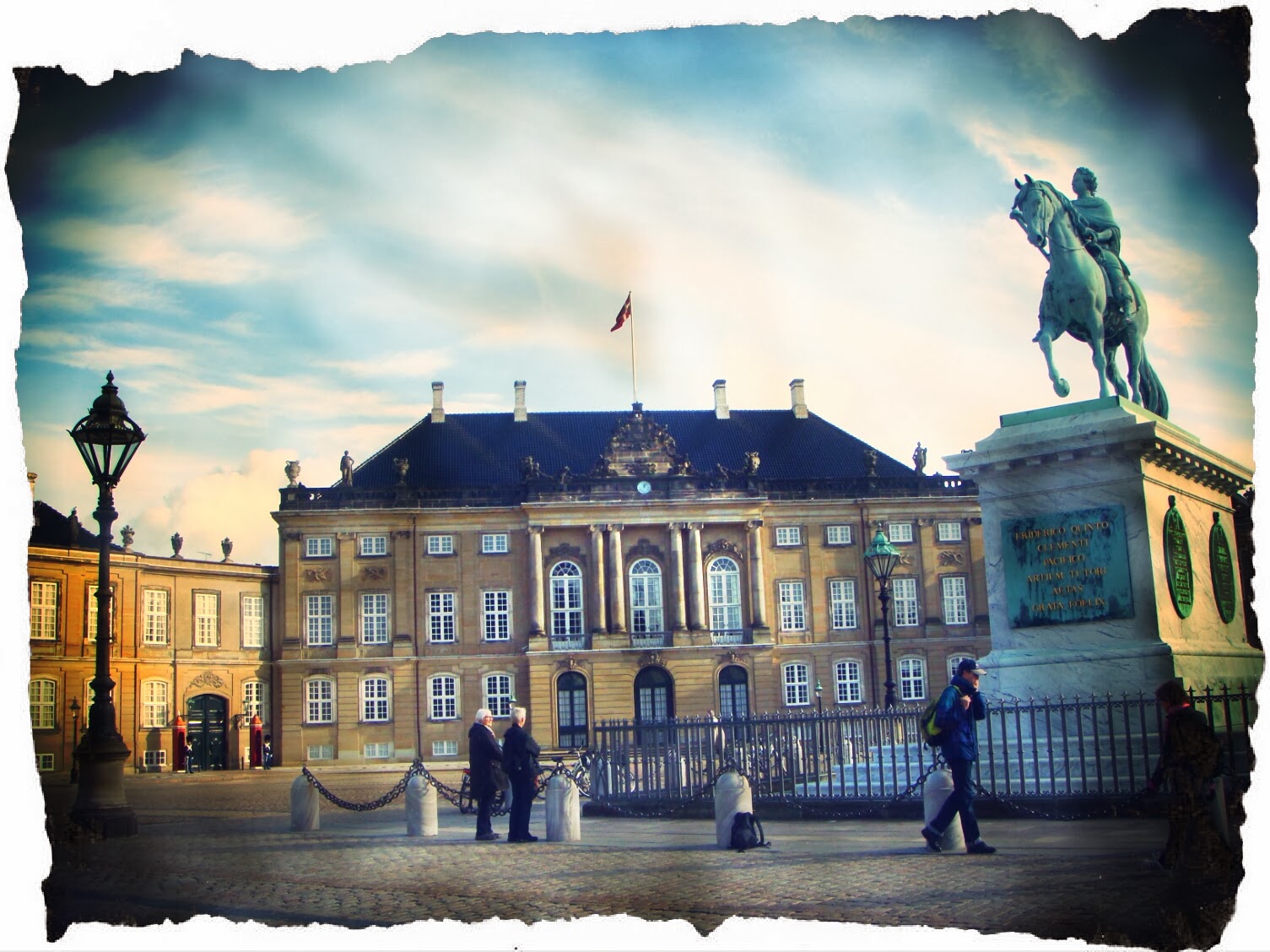 [4] Kastellet
Kastellet is actually a pentagonal fortress which nowadays still hosts a barrack - but what I enjoyed most has been its green part. 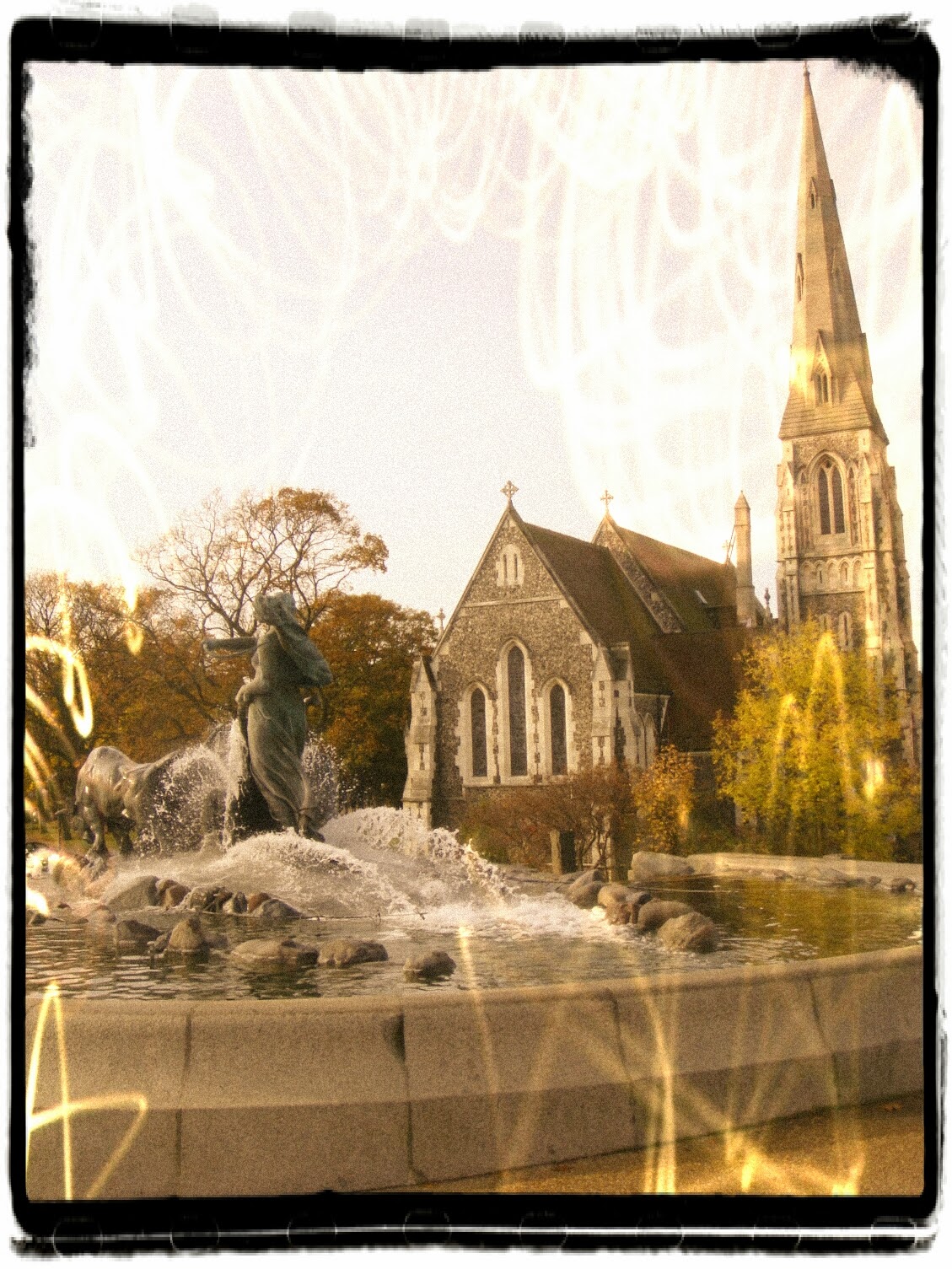 You can take an overhead walk along the pentagon's perimeter, to see the harbour from above (and there is also an old wooden mill there); and then go down and enjoy the woods that surround the back of it. 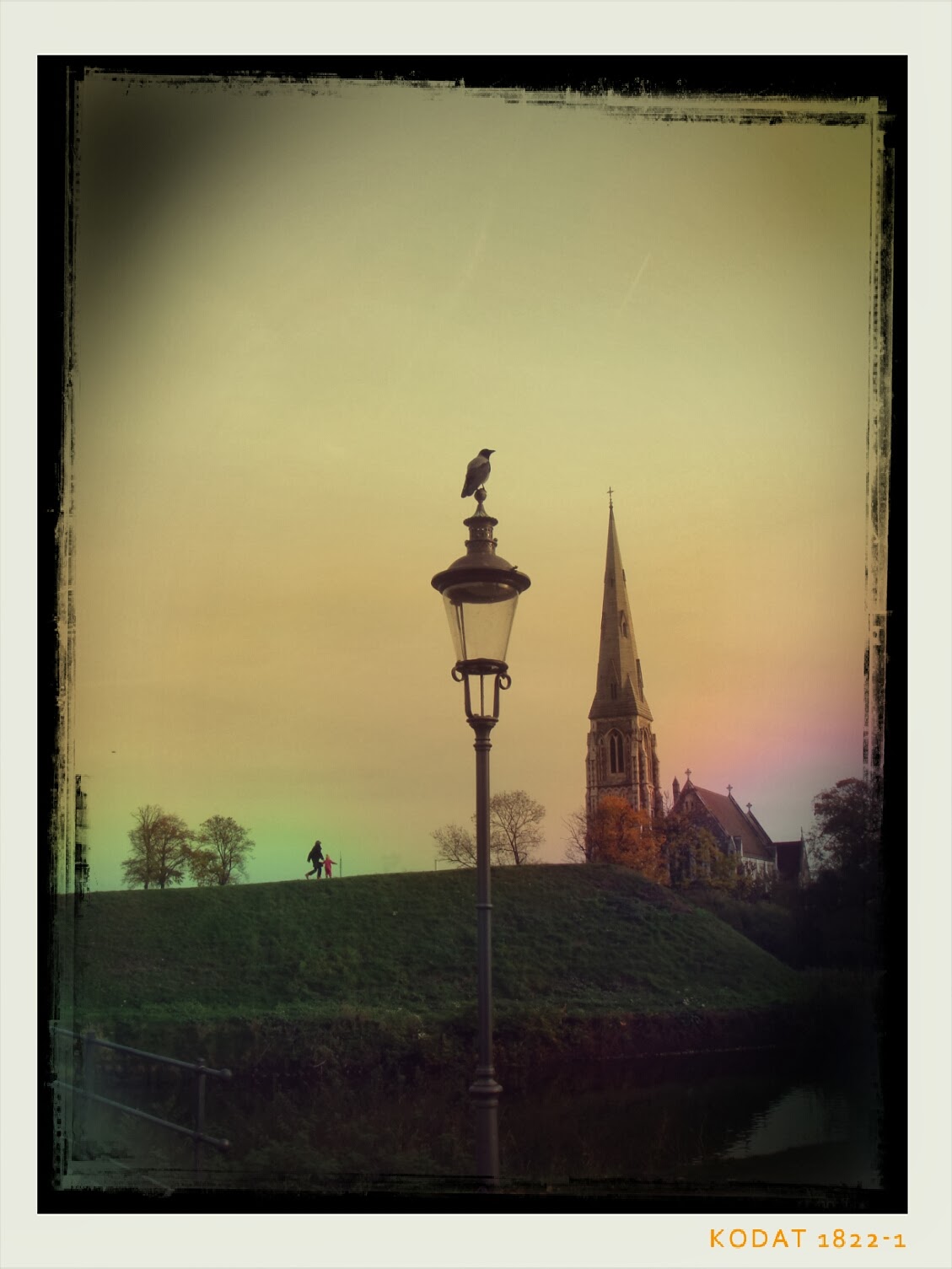 Whenever I go abroad I'm always amazed by the beauty and the cure of the green areas you can find in big cities. They may seem obvious in some countries, but here in Italy they are quite rare to find - I mean, you can obviously find green areas here as well, but they are usually degradated and neglected.
Therefore I enjoy them a lot when I visit countries where there is more cure about this aspect.
The colours of autumn gave to this park a very sweet melancholy, and I loved it.

[5] Rosenborg Slot
This is a small but beautiful castle from 17th century, which has a very romantic appeal.
It's no wonder that many Danish kings have set it as their official residence: I would have done the same, if I were a Danish king, it's really a cosy and pretty hiding place.
Nowadays it hosts the Crown Jewels, but I'd say it's a jewel itself. 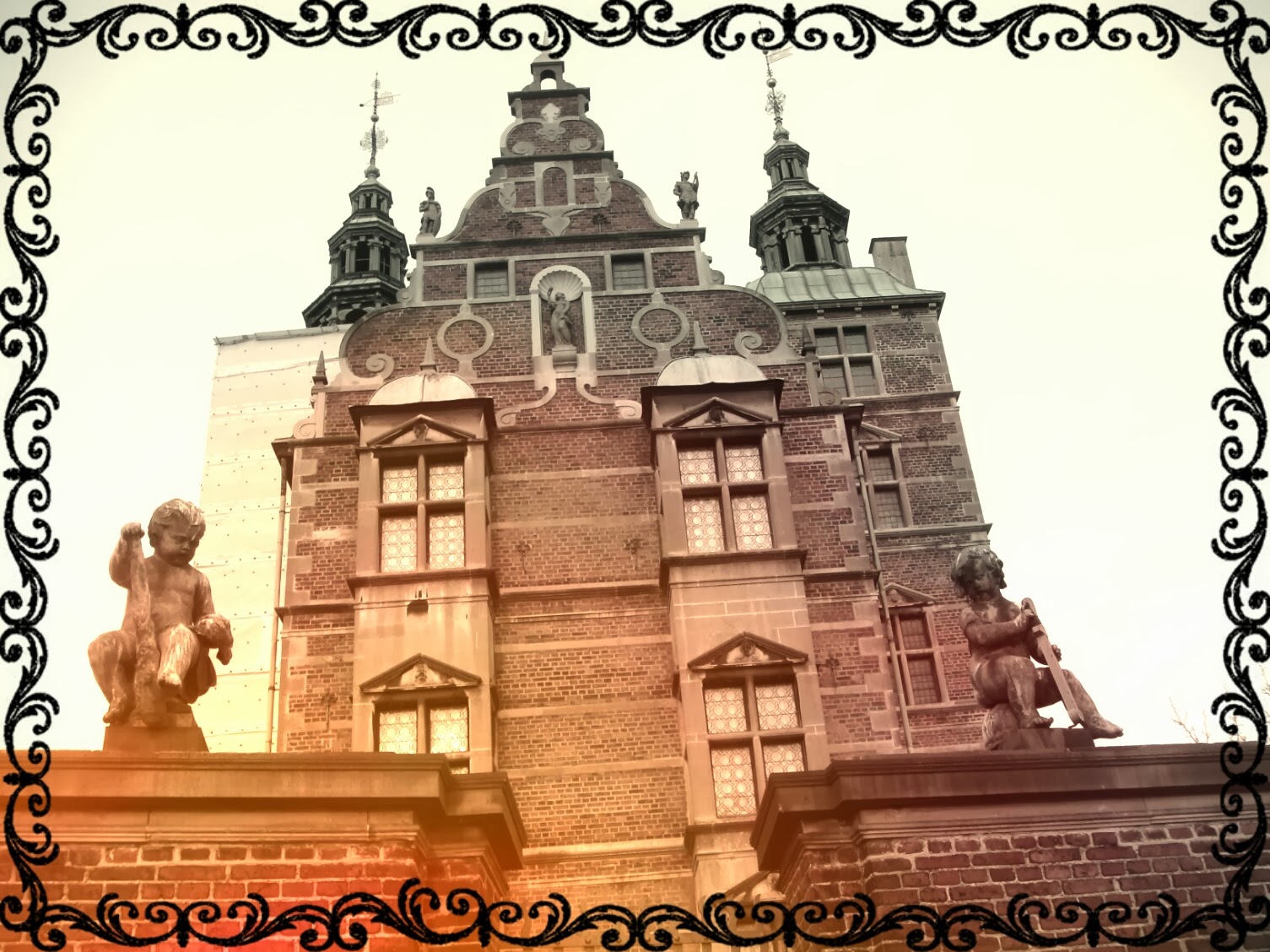 It is surrounded by an equally beautiful English style garden (Kongens Have), which has immediately become one of my favourite strolls in the city. 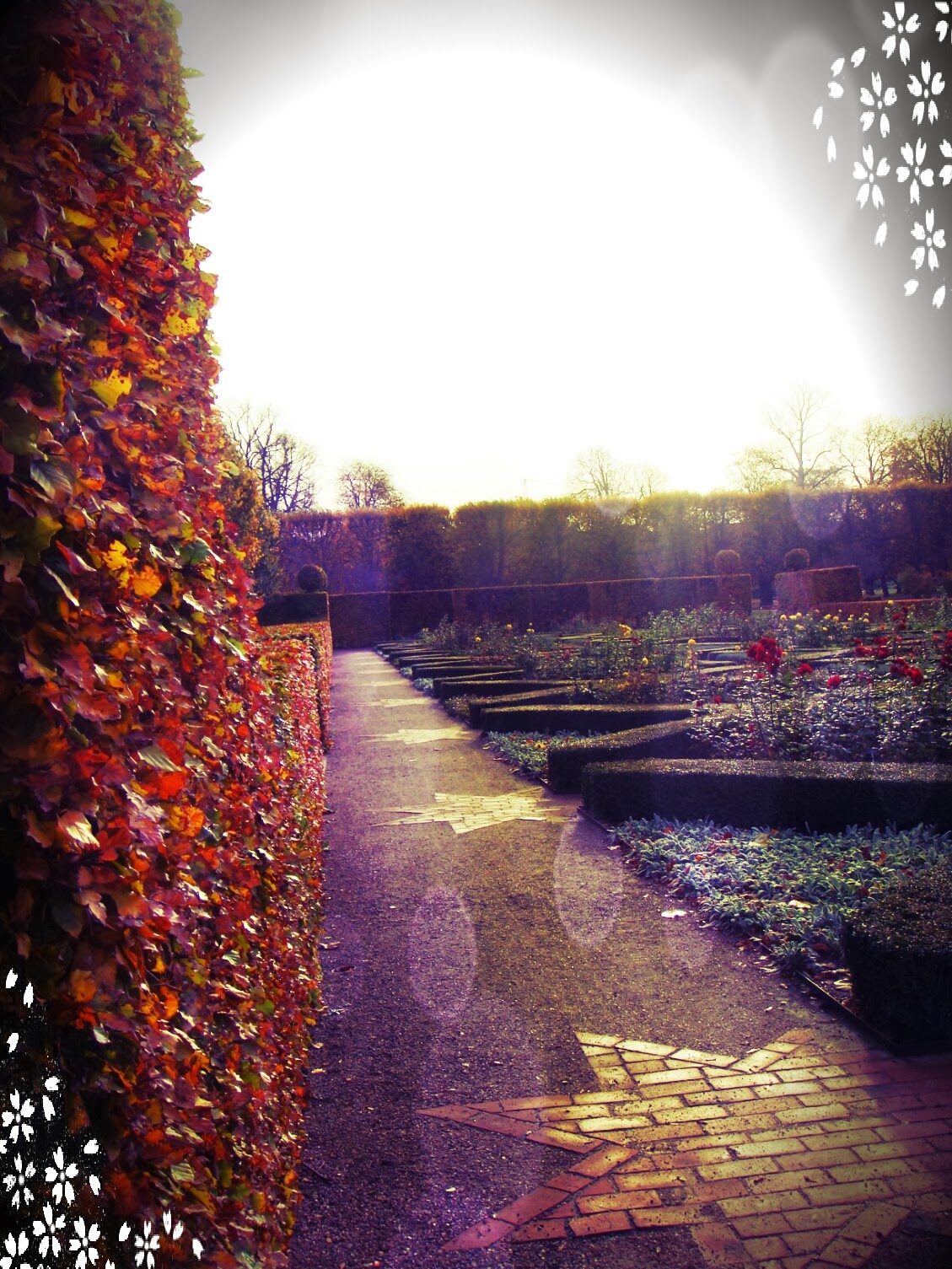 I love its wooden bench surrounded by statues and tidy bushes and flowerbeds, and also the ditch that surrounds the castle with the ducks swimming in it. 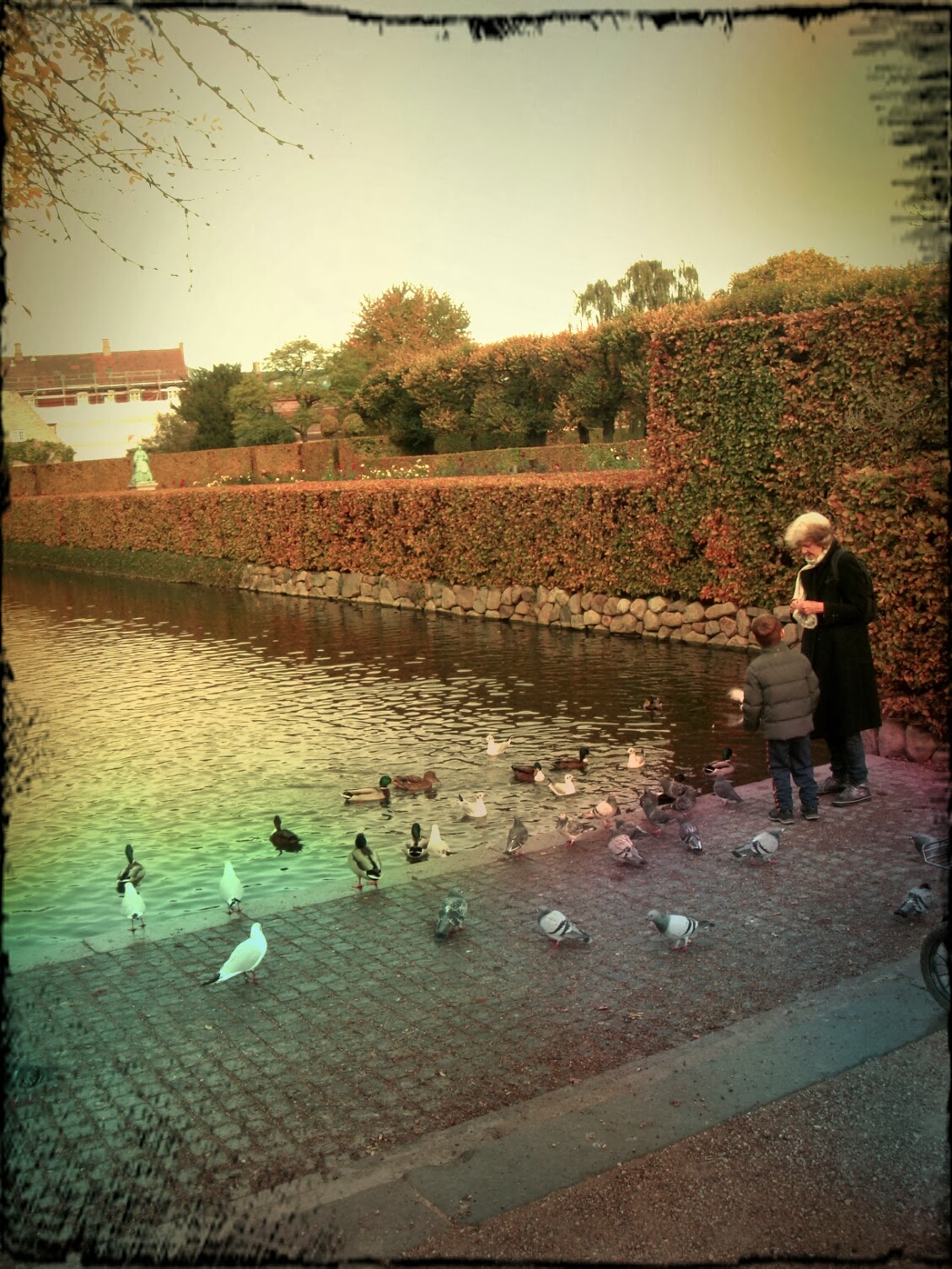 [6] Taking the train to Malmö


Malmö is in Sweden but it takes just 30' by train to reach it, crossing a bridge over the sea.
Don't worry about changing your money, because every shop in Malmö accepts Danish crowns and viceversa.
Malmö is not a touristic city, but I'd say it's anyway worth a visit because it's really pretty: I personally enjoy the appeal of Scandinavian cities and Malmö totally has it. 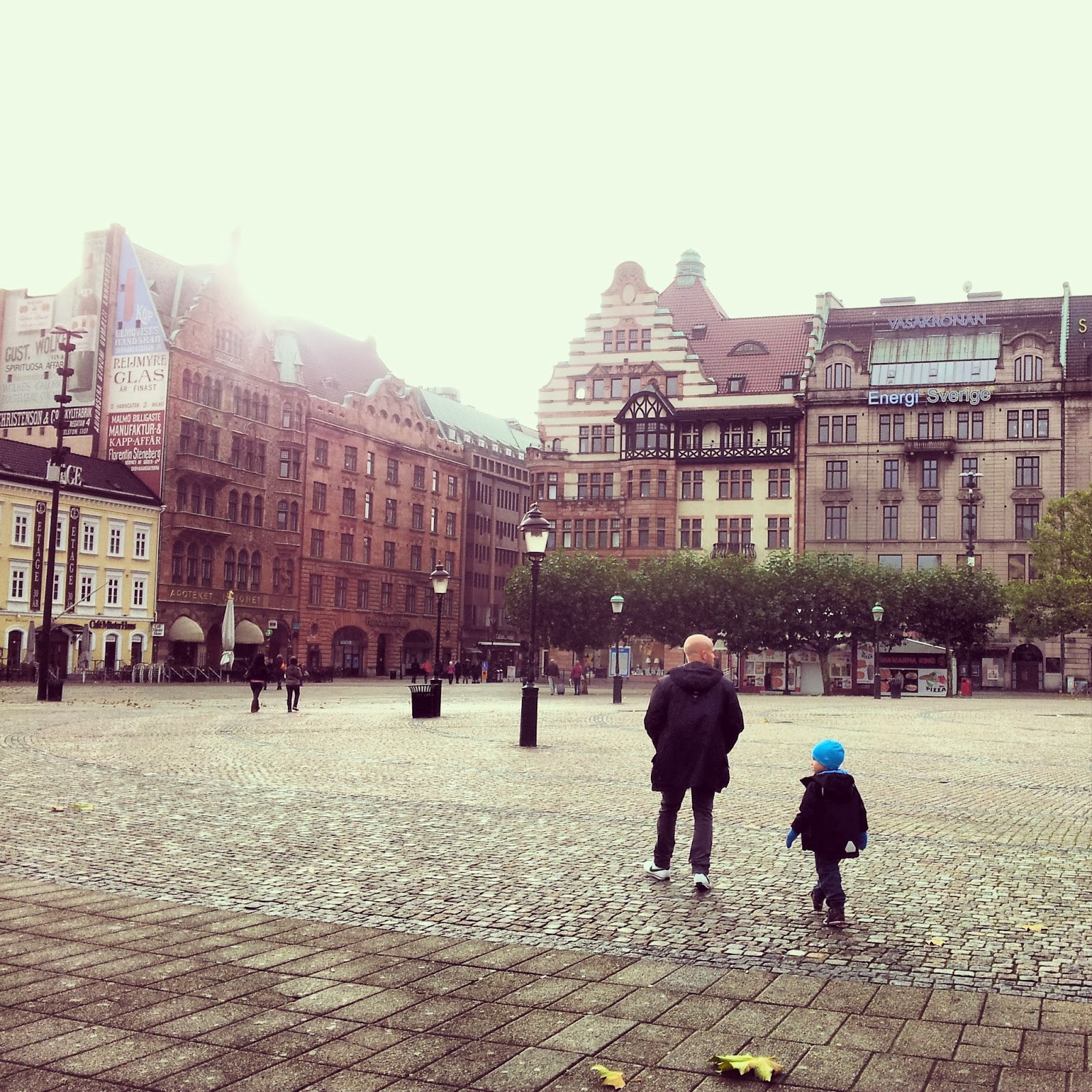 The city center mostly developes along a quite long pedestrian way, starting from an airy square with the city hall and arriving to the old town with craftsmen shops in old buildings and pebbles roads.
There is a park that is also a cemetery - this is normal in Sweden, and I must say I quite like it: it's quite a way to feel a bit more at ease with the dimension of trespass, or perhaps just a way to underline a sort of continuity between life and death.
But what I've liked most are these random cats sculptures found along the river: 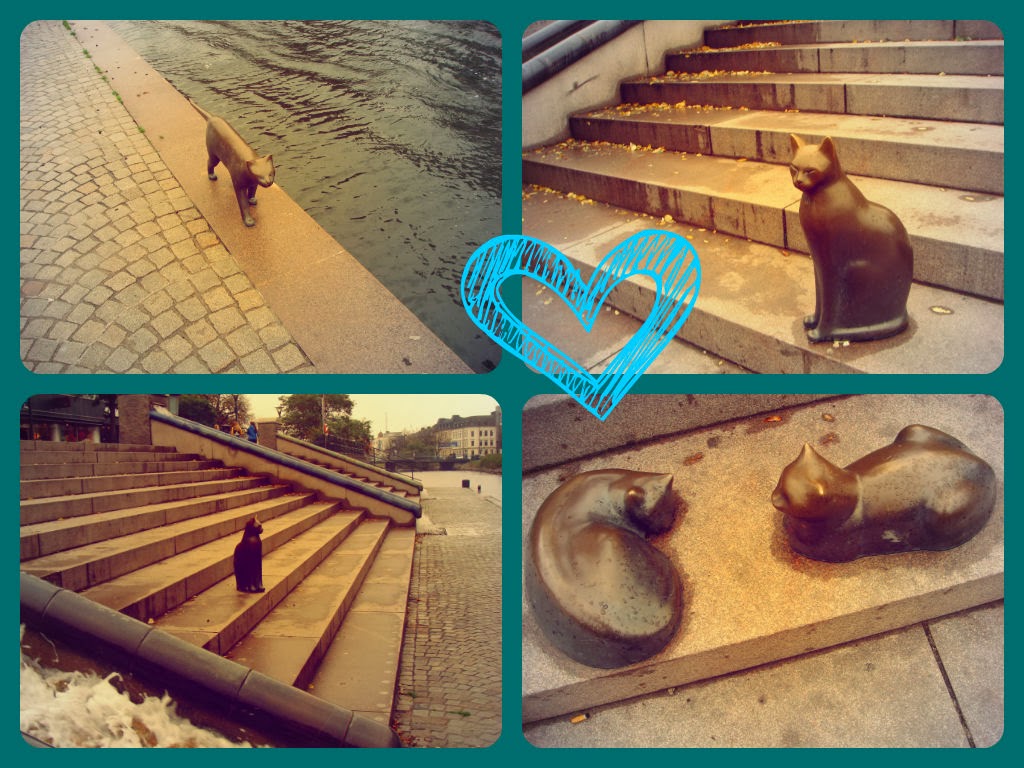 [7] Strøget
Strøget is being referred to as a unique entity, but it's actually composed by 5 different streets, all pedestrian and all full of any kind of shops, from posh boutiques to global cheap brands.
Besides the shops, it is a nice ambience, with old pastel buildings in curvy Scandinavian style and paved roads.
It is all known for street artists, so it's nice to take a rest from your shopping marathon by sitting on a bench and watching them performing. Or simply watching people passing by. 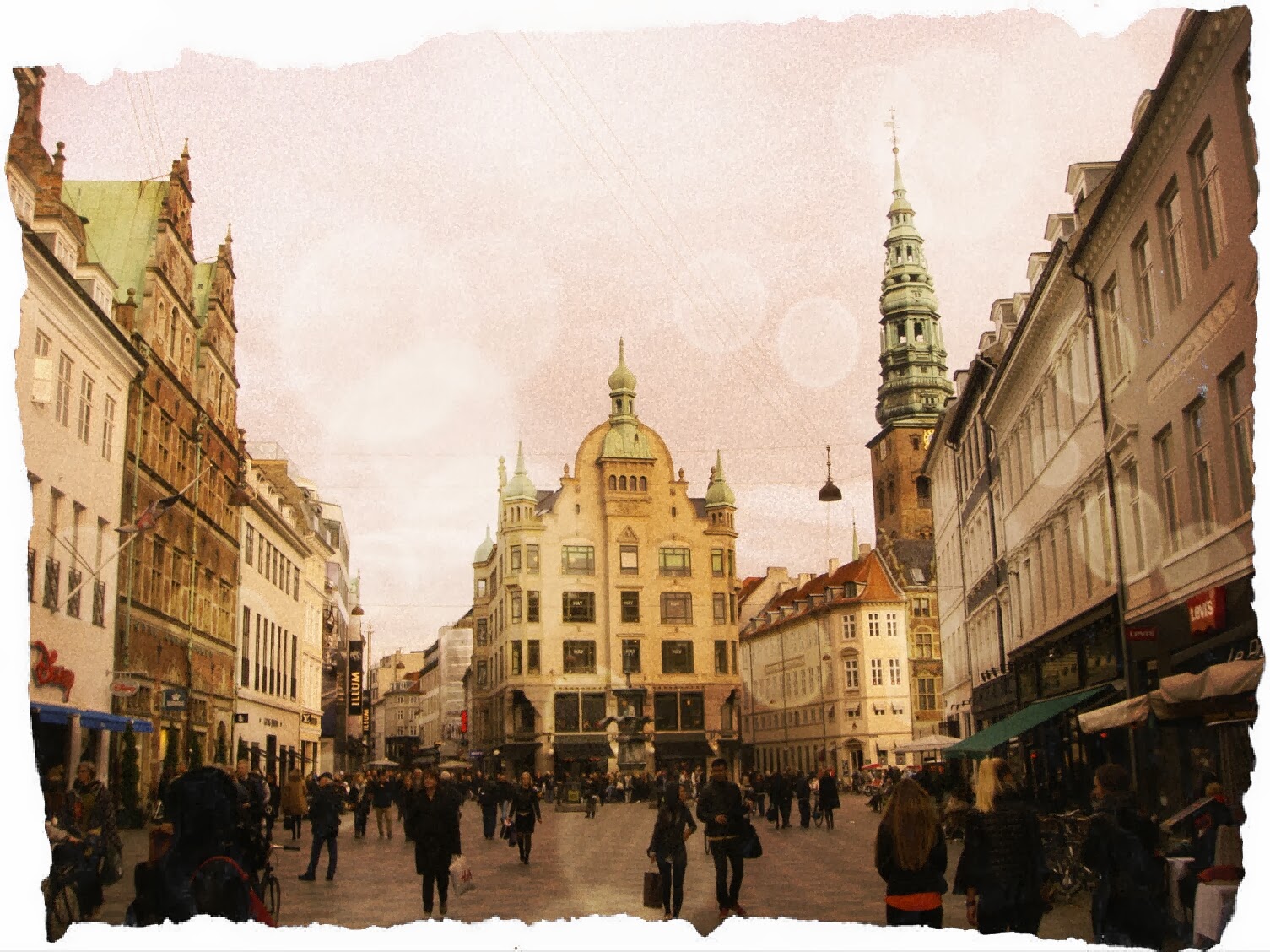 [8] The Little Mermaid
Well, she is the symbol of Copenaghen. You can't come here without seeing her - or rather, without looking for her.
Because, actually, she is out from the usual "touristic" itineraries, in a part of the harbour which is actually not *that* distant, but where anyway you have to go with a purpose. It is not that you simply walk around and then bump into her by chance.
At one point you might even be wondering if you are going the right way, exp. if, like me, you decide to reach her by crossing the Kastellet park ... but then you will immediately be reassured by the huge amount of people hanging around. 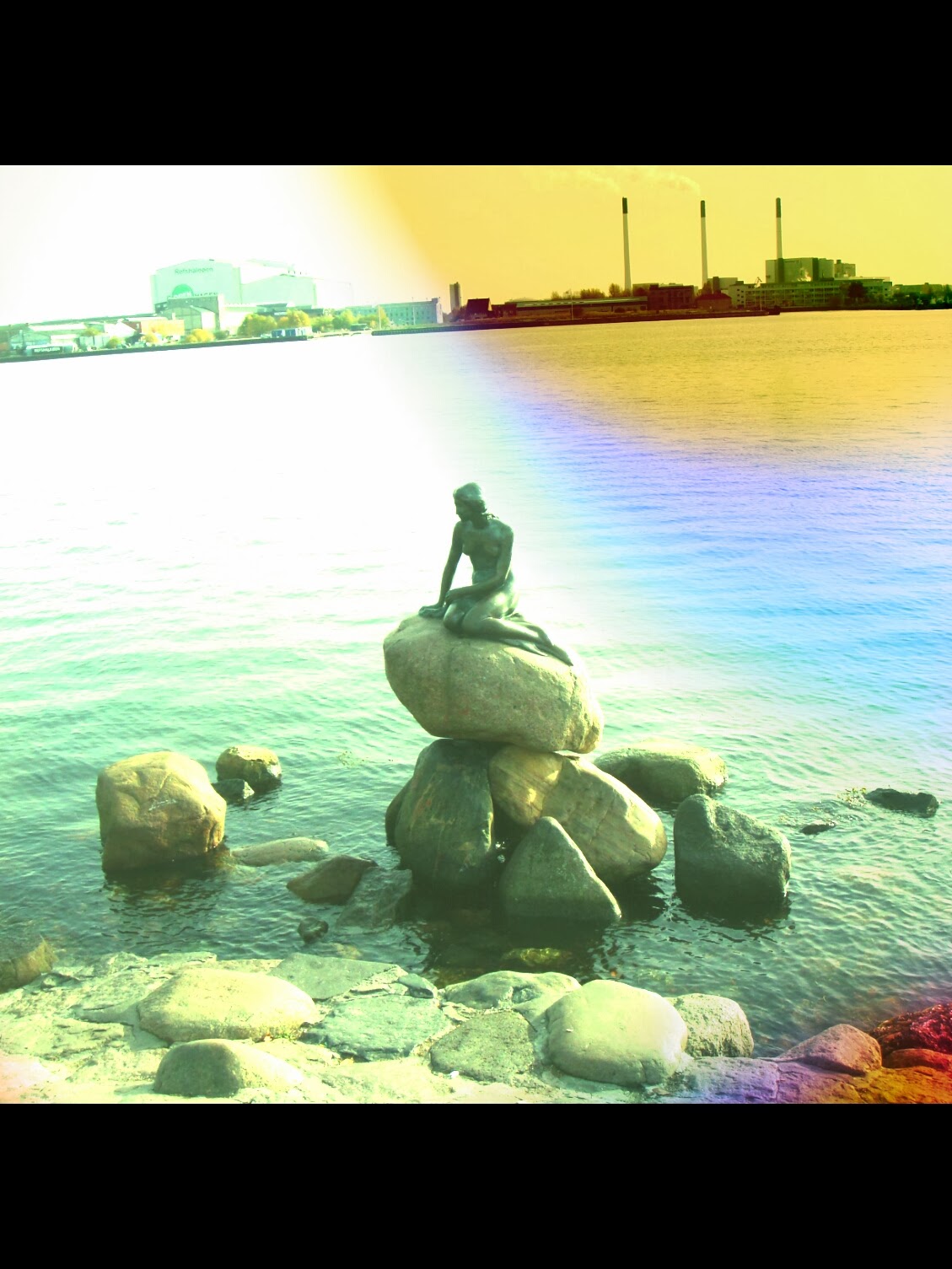 And... well. She is quite small, a bit distant from the shore, has a quite prosaic post-industrial background behind her and might probably enter into some sort of "Top 10 landmarks that didn't quite meet expectations" classification - but still she is pretty.
And, really, don't go away from Copenaghen without having seen her. Not sure about what made of her a landmark, but still she is: as every icon she has her detractors, but you cannot become an icon if you are not worth it. 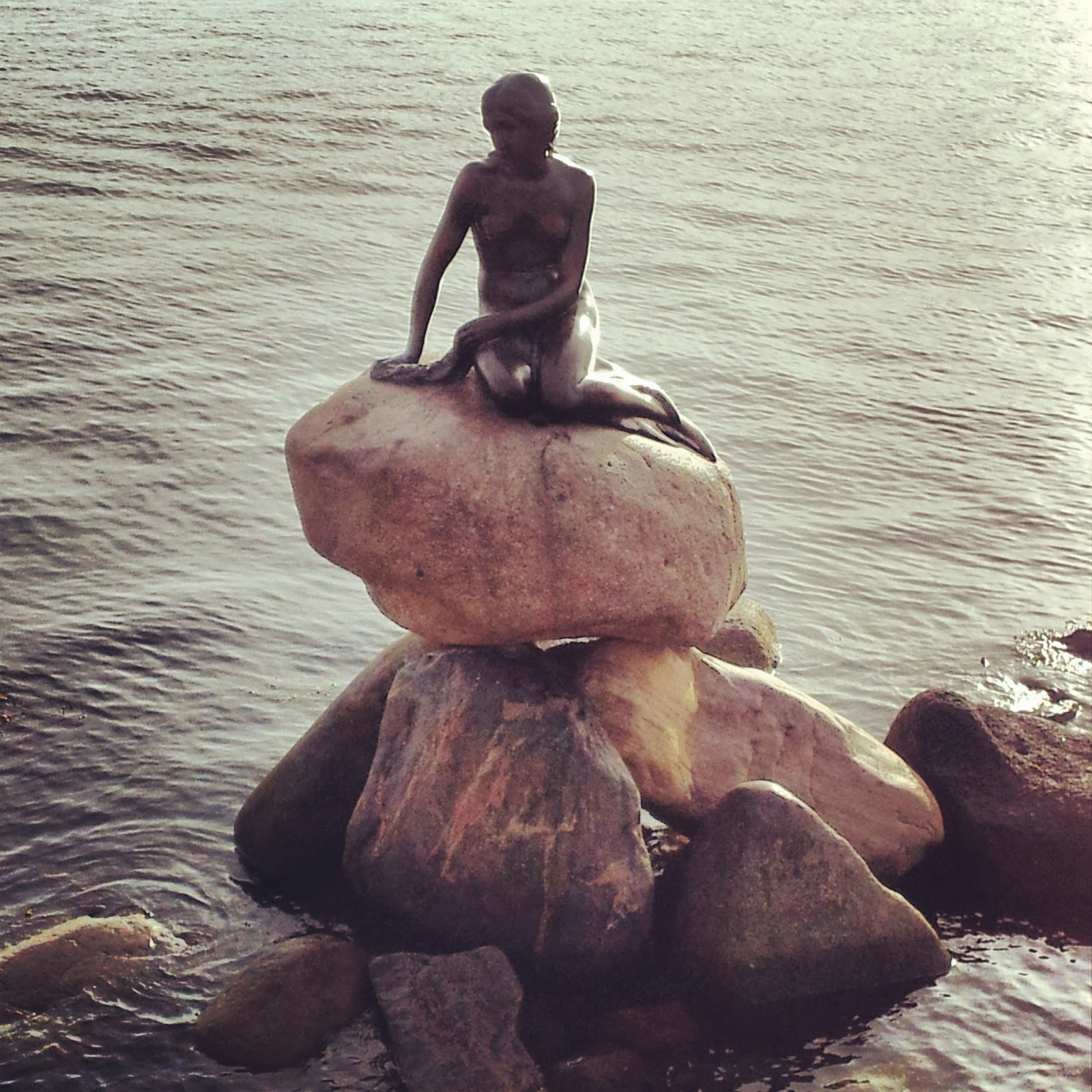 [9] Rådhus
The City Hall.
It's been built at the end of 19th century but it has a gothic appeal, with all the fantastic sea creatures that decks it.
You can climb the tower, and there's an amazing view of the city from there - but anyway, even if you don't do it, it's still one of the prettiest buildings in the city.
And it could be the point where to start your exploration of the downtown. 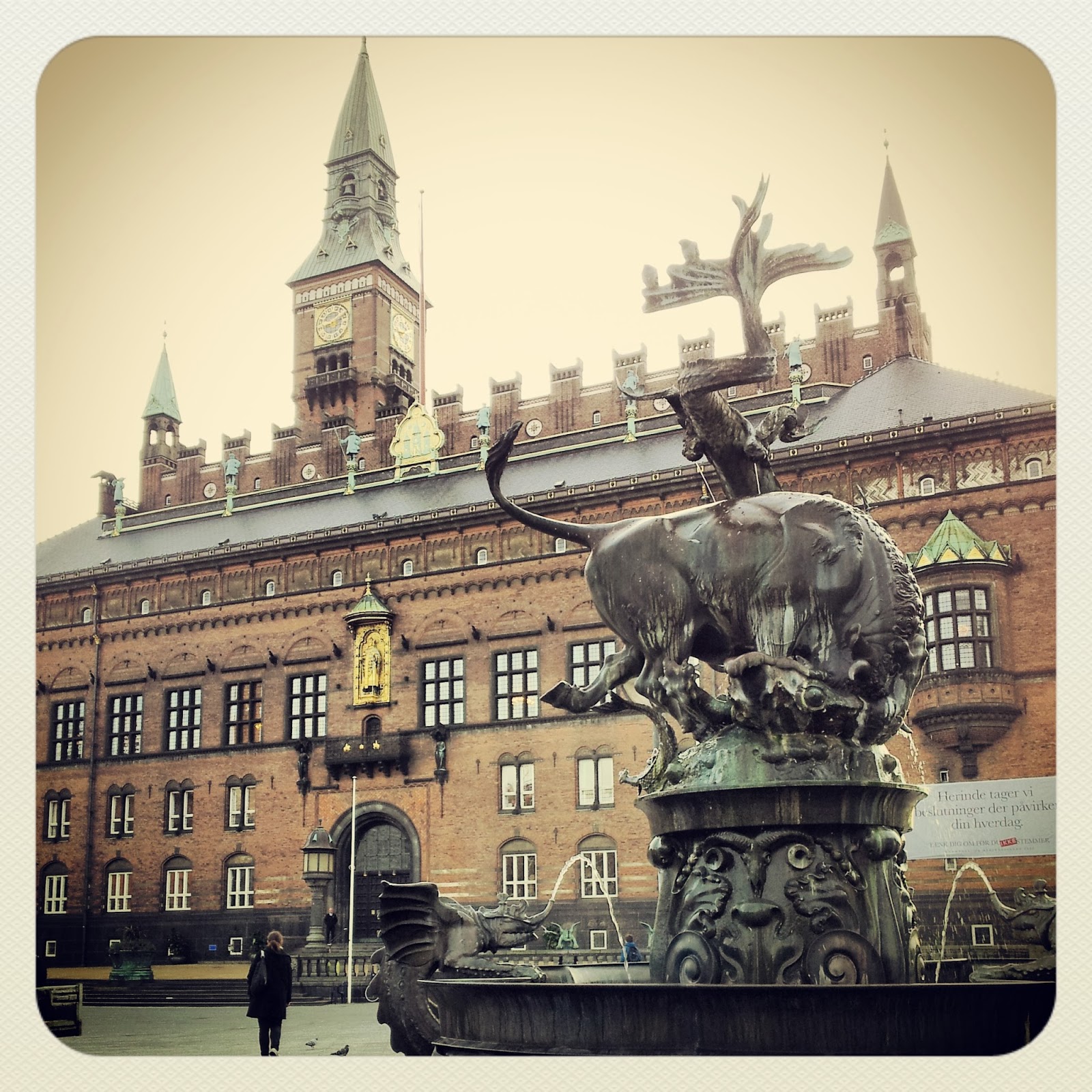 [10] Latin Quarter
It's the Medioeval quarter and the seat of the University.
Just hang around and get lost in the alleys: everywhere you can spot some pretty corners! 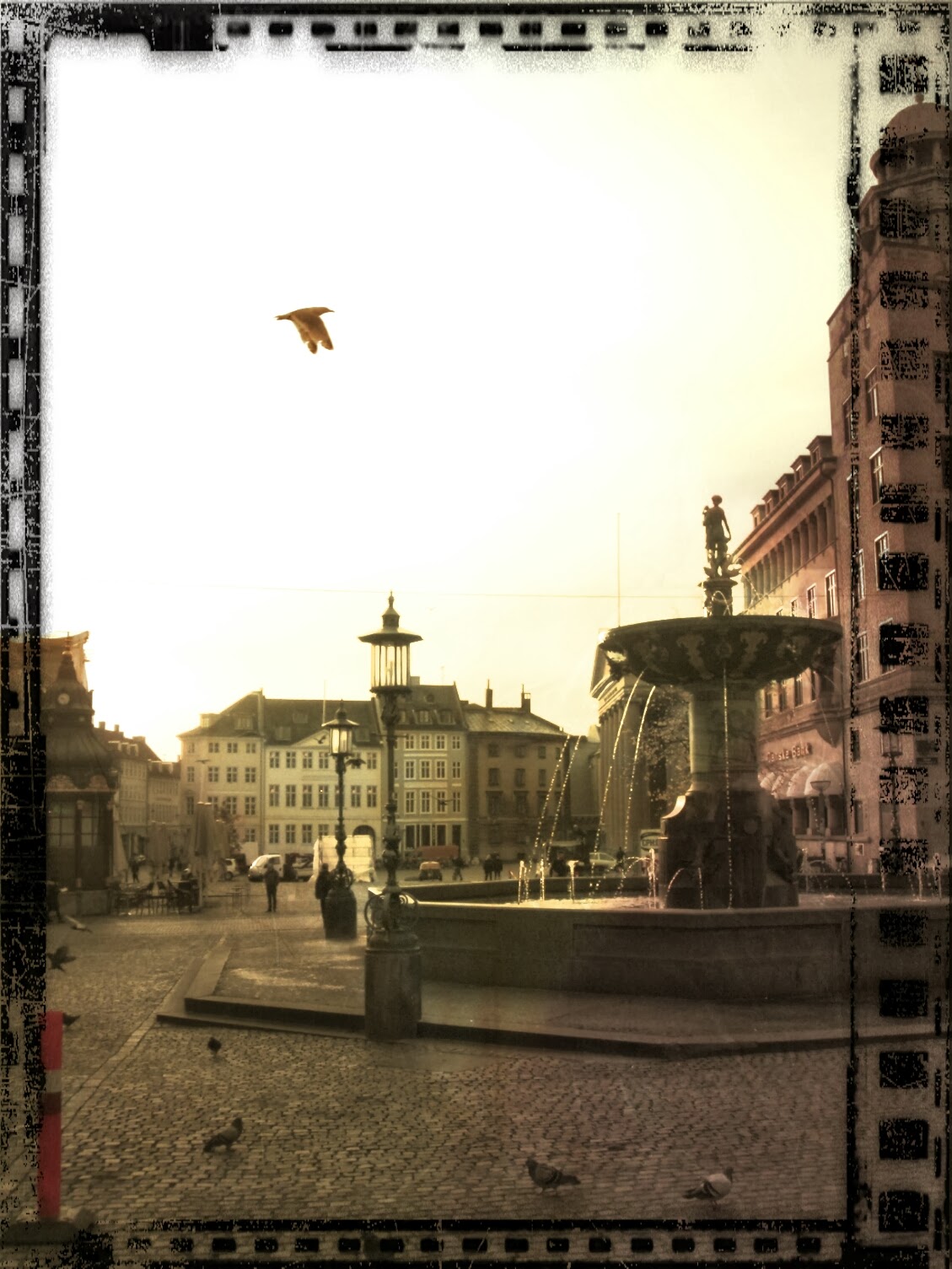